Captain Terje Nilsen of the Viking Star personally delivered the unfortunate news over the ship’s PA system during breakfast.

“Because of high winds, we will be cruising past the port of Bodø, and continuing onto Tromsø. I apologize for the inconvenience, but the weather is just not safe for us to make a landing.”

Of course, we were disappointed.

Bodø is a charming alpine village north of the Arctic Circle and home to Saltstraumen, the world’s largest maelstrom. Additionally, Leah and I had booked an excursion to Kjerringøy, and would have enjoyed hiking through this preserved trading post dating back to the 1800s.

But Captain Nilsen wasn’t kidding. If the gusting winds and pounding seas were any indication of what was witnessed as the Hurtigruten ferry attempted docking in Bodø, then I couldn’t imagine the Viking Star following suit–certainly not with so many passengers unable to handle the rough crossing from Tilbury, England.

Nevertheless, passengers were invited to the pool deck following breakfast to celebrate a longtime maritime tradition of crossing the Arctic Circle.

While Paulo serenaded us with folk classics and Beatles covers of Here Comes the Sun, and I’ll Follow the Sun, (ironic, don’t you think),

the crew assembled to initiate each of us into the Order of the Blue Nose.

Our Cruise Director, Brensley Pope took the microphone to give some background:

Good afternoon Ladies & Gentlemen and welcome! We have entered through the Arctic Circle, and it is time to make our journey official by welcoming you to the Order of the Blue Nose! First, a little history.

The word “arctic” comes from the Greek word arktikos: “near the Bear, northern” The name refers to the constellation Ursa Major, the “Great Bear”, which is prominent in the northern sky.

The region north of the Circle, known as the “Arctic” covers roughly 4% of the Earth’s surface.

The position of the Arctic Circle coincides with the southernmost latitude in the Northern Hemisphere at which the sun can remain continuously above or below the horizon for a full twenty-four hours; hence the “Land of the Midnight Sun.” This position depends on the tilt of the earth’s axis, and therefore is not a “fixed” latitude. The Arctic circle is moving north at a rate of 15 meters per year, and is currently located at 66 degrees 33 minutes North latitude.

The crowd responded with laughter. And then it became official with his declaration…

Whereas by official consension, our most honorable and well-beloved Guests have completed successful passage through the Arctic Domain. We do hereby declare to all in attendance and that those who possess the courage to take the Aquavit cleanse shall be marked accordingly, with the prestigious Order of the Blue Nose.

This is to certify that you all have been formally and officially initiated into the Solemn Mysteries of the Ancient Order of the Chilly Deep, and should wear your blue noses proudly! With the order of myself, the Captain, I command all subjects to Honor and Respect those onboard Viking Star as one of our Trusty Blue Nose family.

We officially welcome you to the Blue Nose Order! Skol!

I got my blue nose and drained my shot glass of chilled Aquavit. Was I now a proud member of a society of alcoholics and sun worshippers? 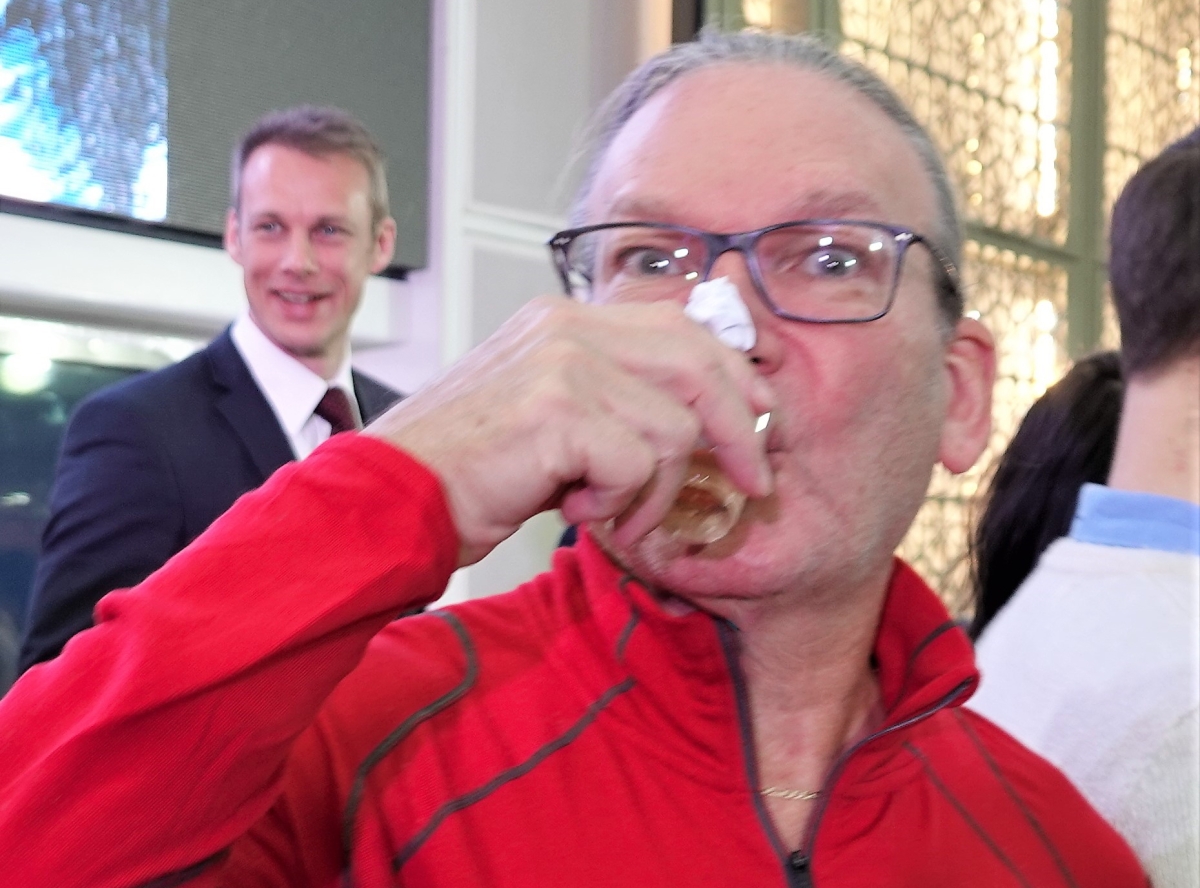 But I wasn’t alone.

Lines formed from both sides of the pool deck for distinguished crew members to efficiently annoint all worthy passangers with a blue-tinted dab of meringue. 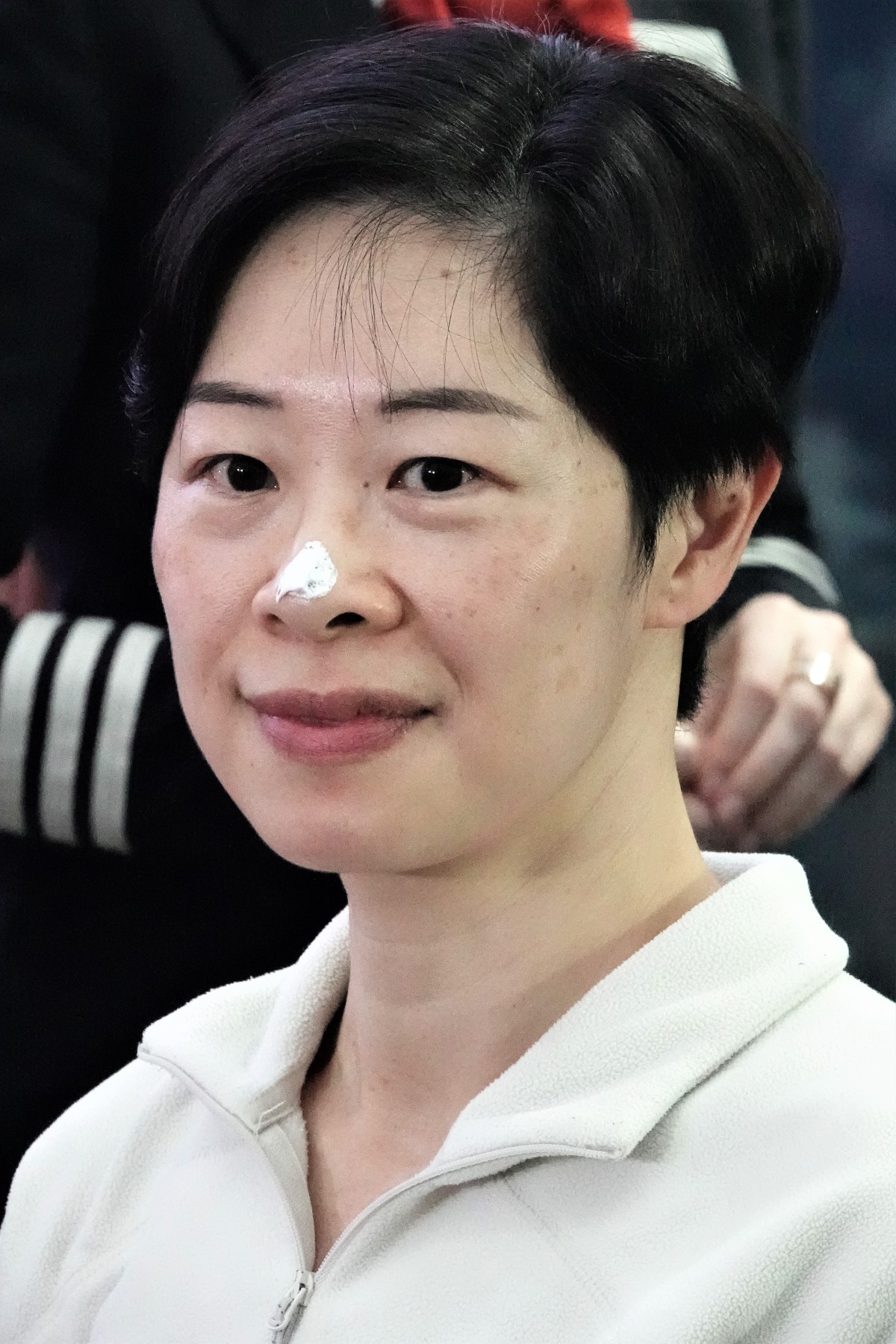 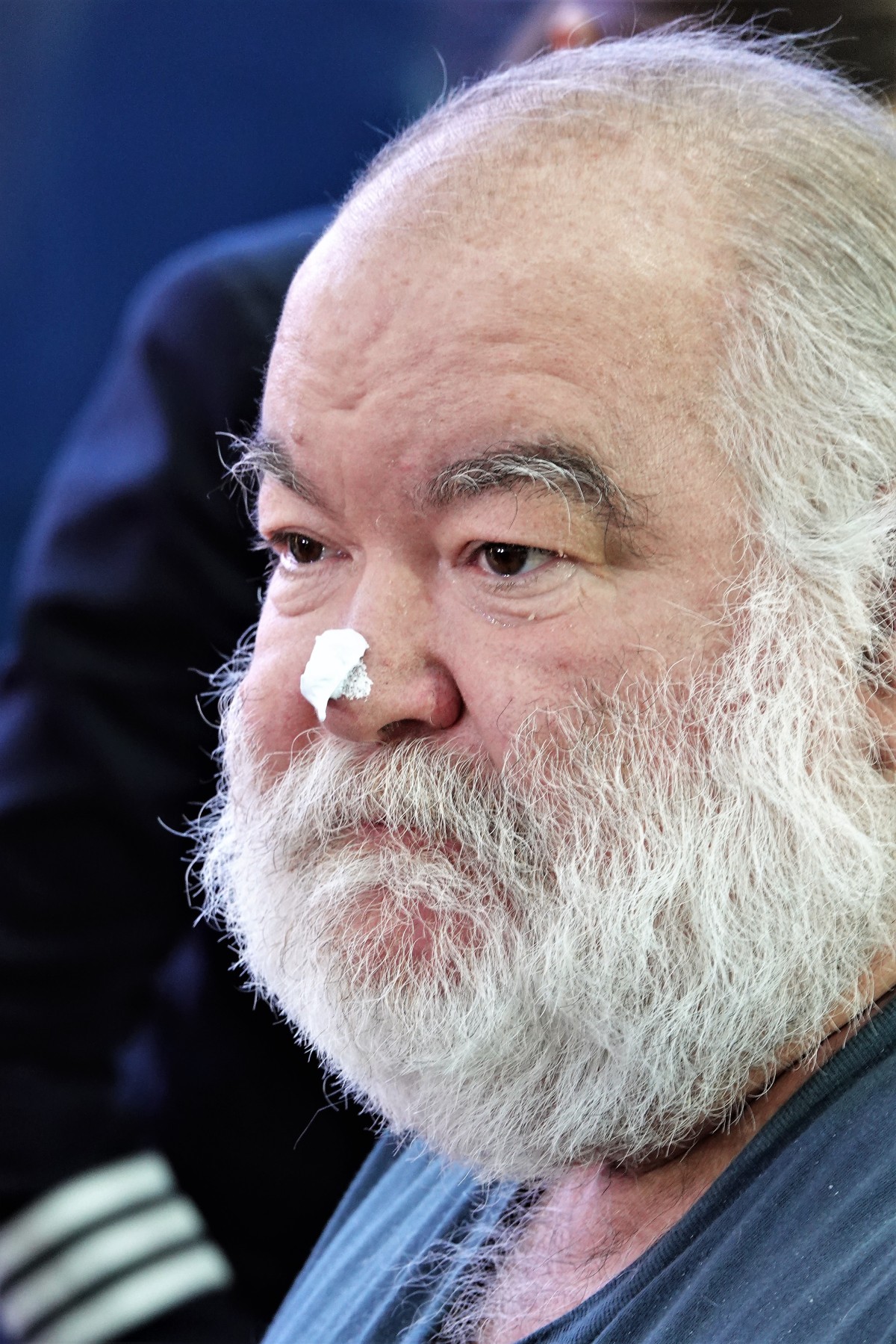 United in singular purpose, we now shared a common bond.

To validate our accomplishment, each of us received a certificate of achievement validated by Captain Nilsen.

Soon after, while walking about the jogging track in whipping winds after a filling lunch, I caught a glimpse of what made this affair so special.

Now that’s what I call “Crossing the Line!”