After leaving Yosemite behind, Leah and I strategically home-based in Petaluma, and ventured along the California coast, from San Francisco to Point Lobos Natural Preserve and places in between.

Our collection of brief visits are best detailed through a series of images that more easily reveal the scope and variety of the scenery we enjoyed. 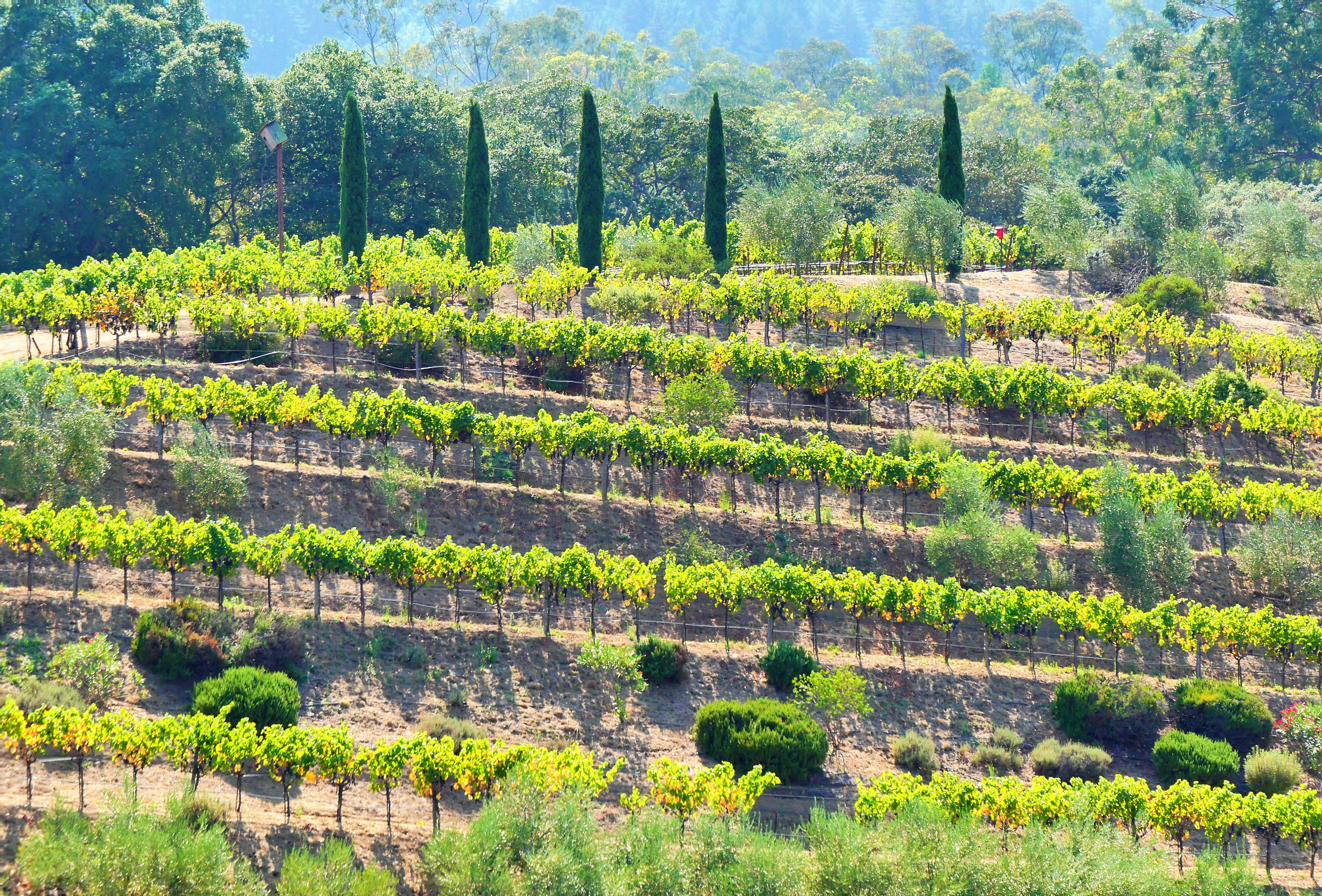 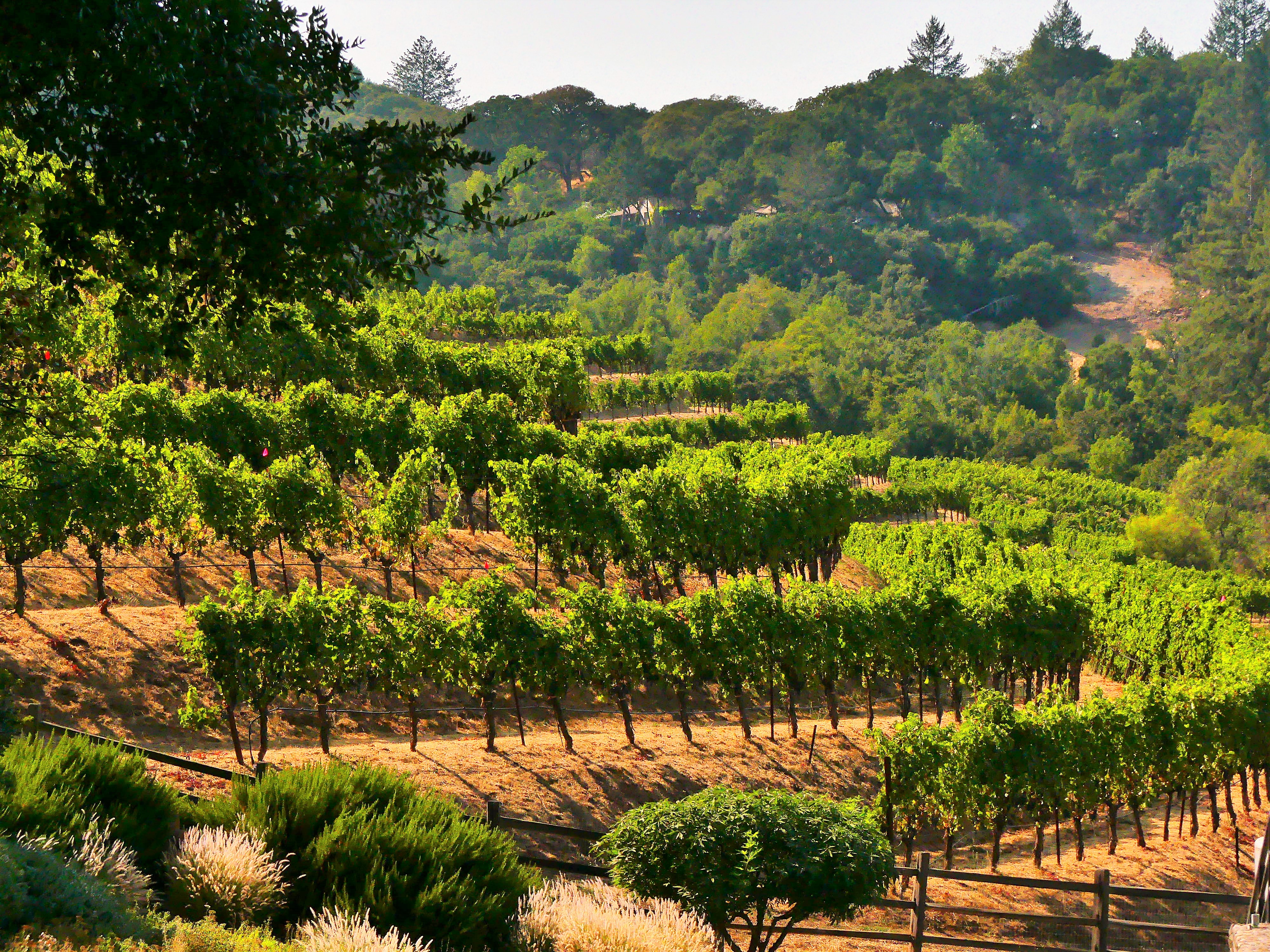 John Muir Woods: a hike on the Canopy View Trail 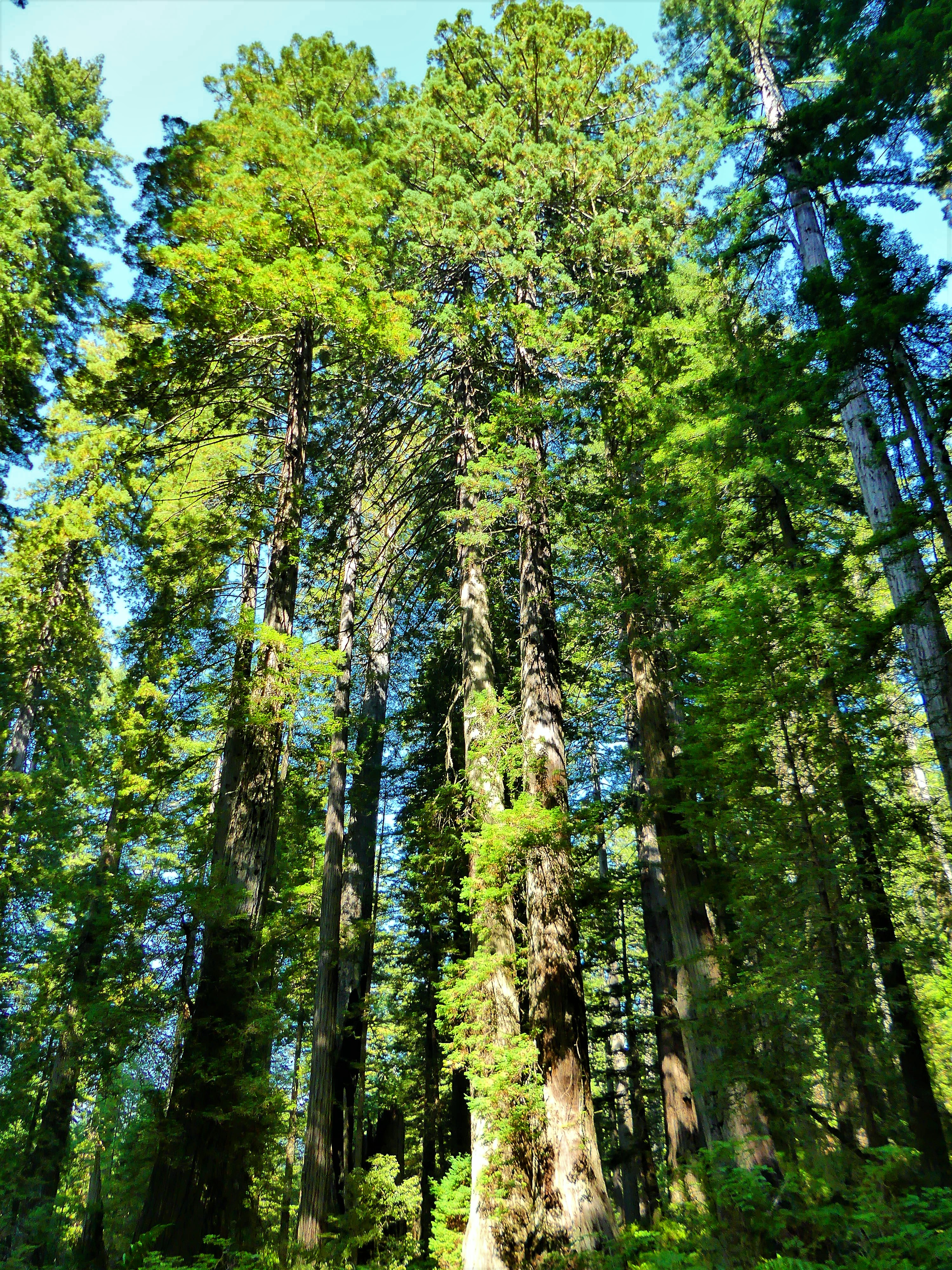 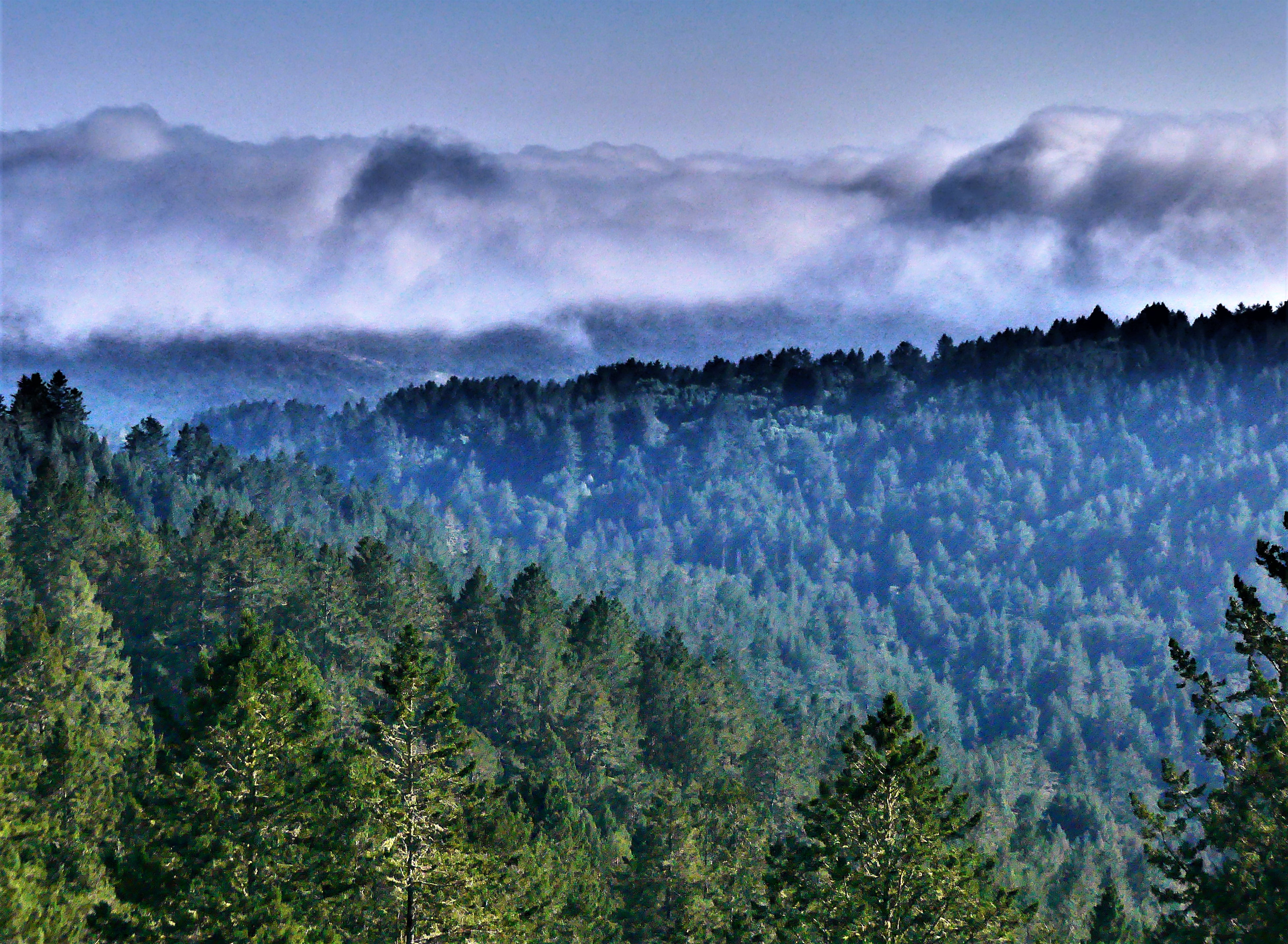 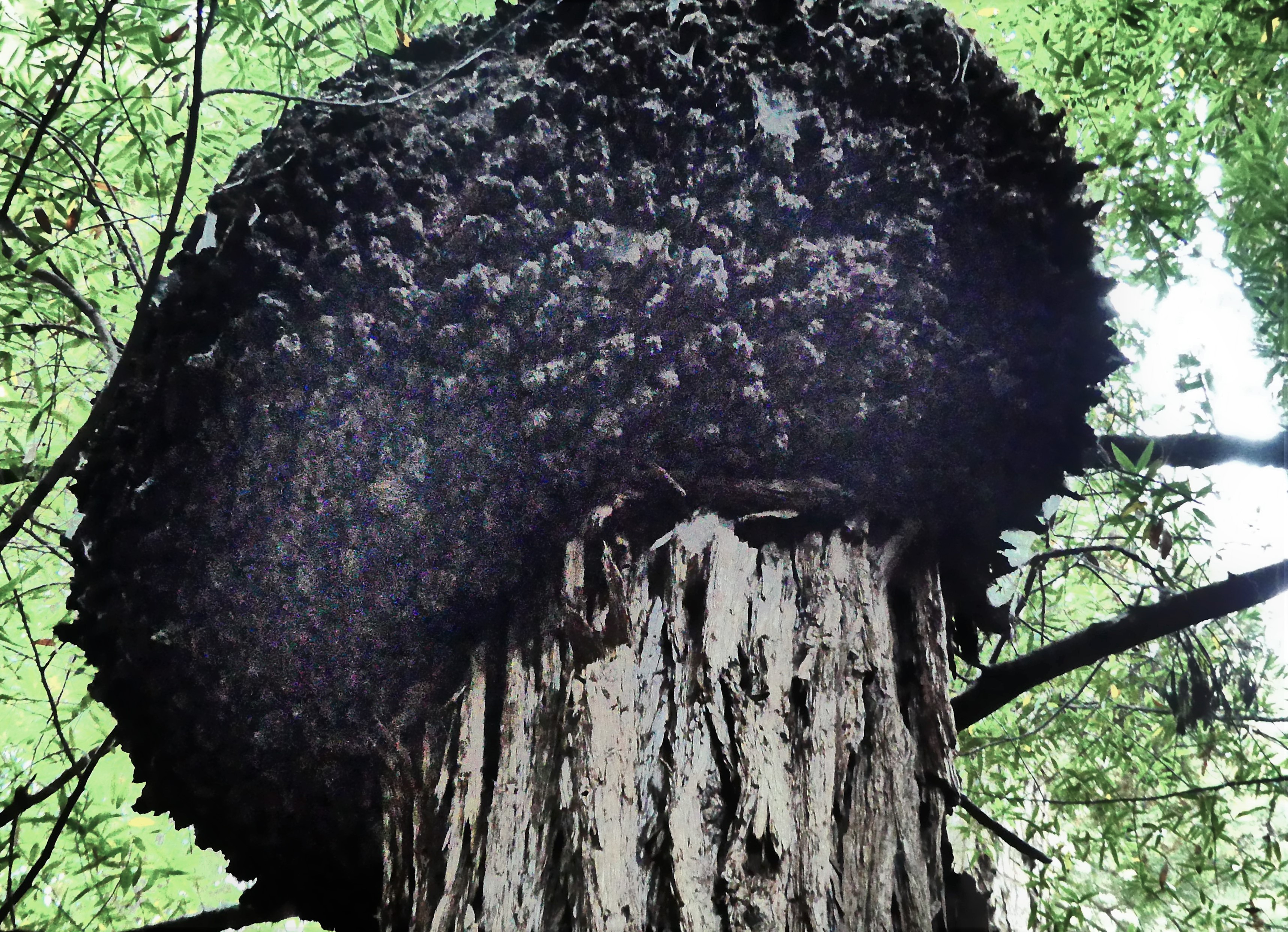 San Francisco: a ferry ride from Tiburon to the Ghiradelli Chocolate Festival 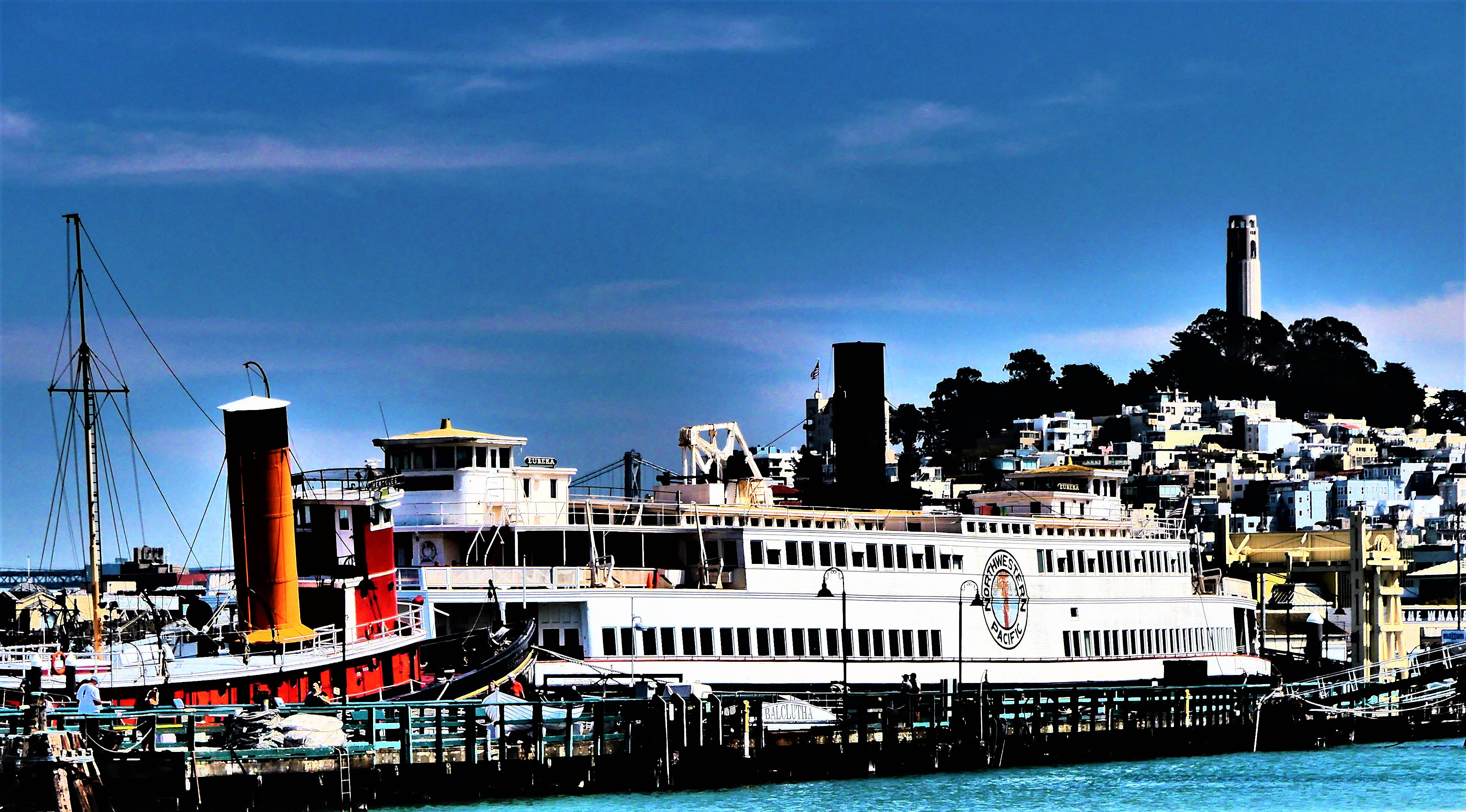 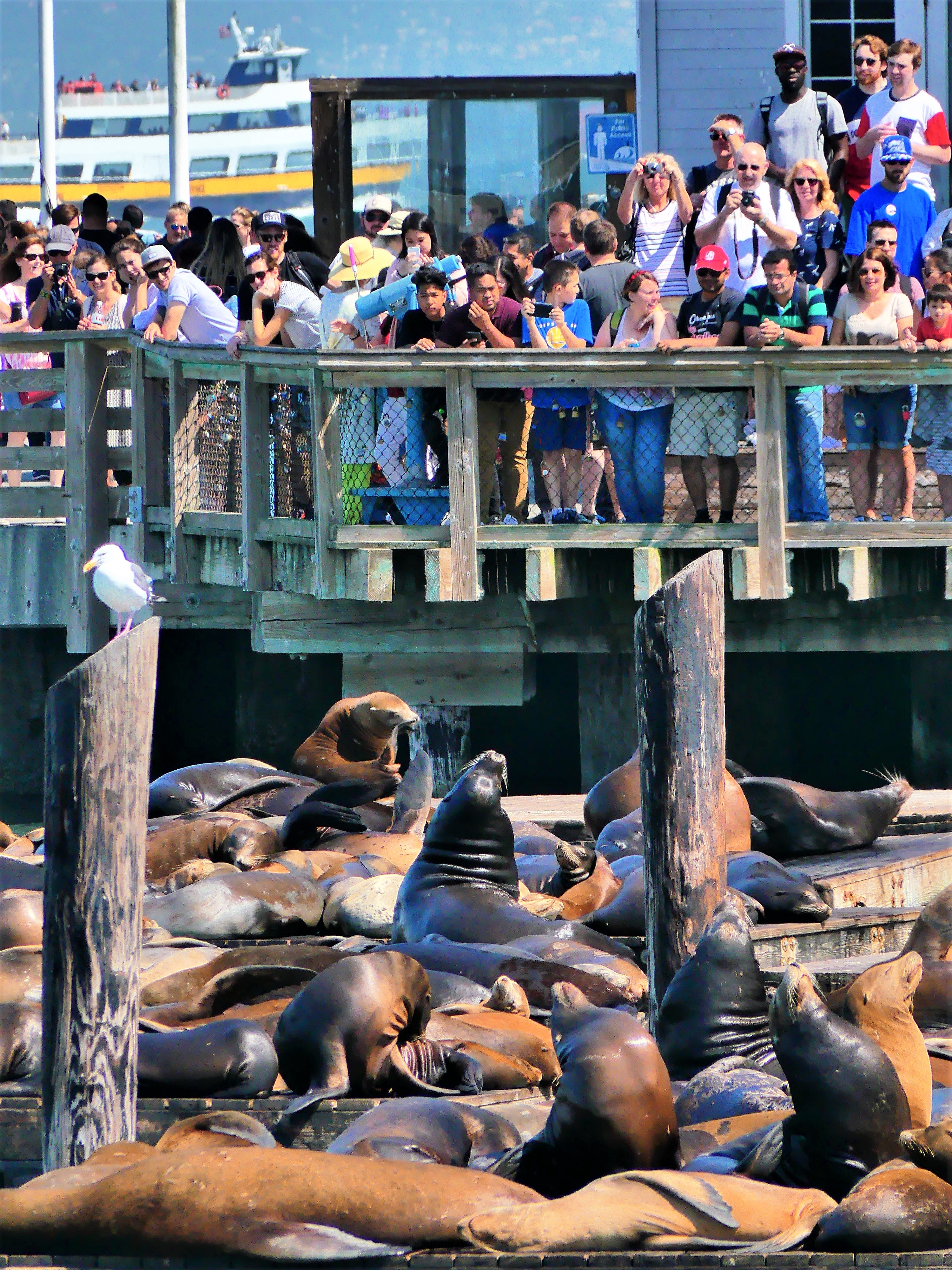 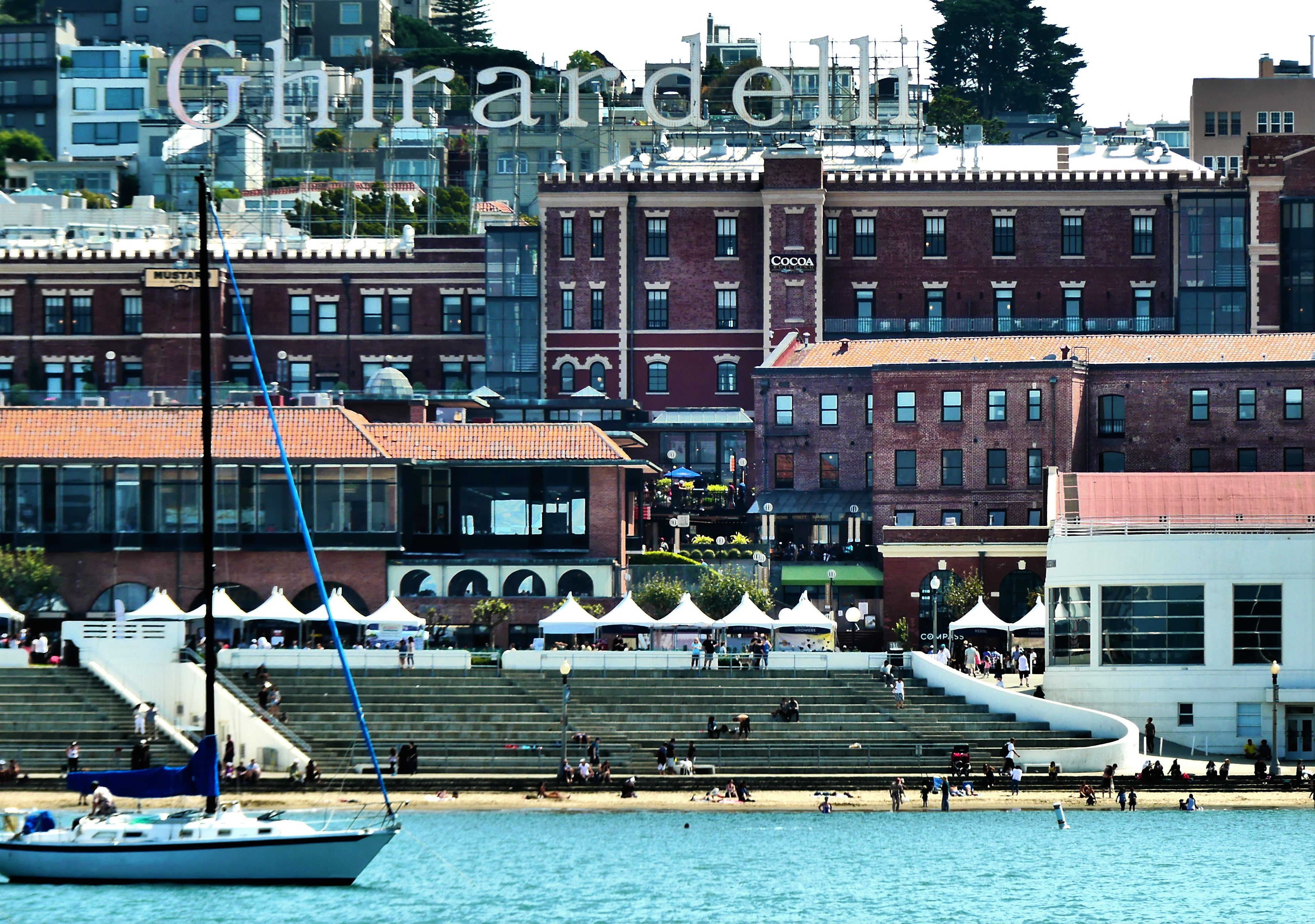 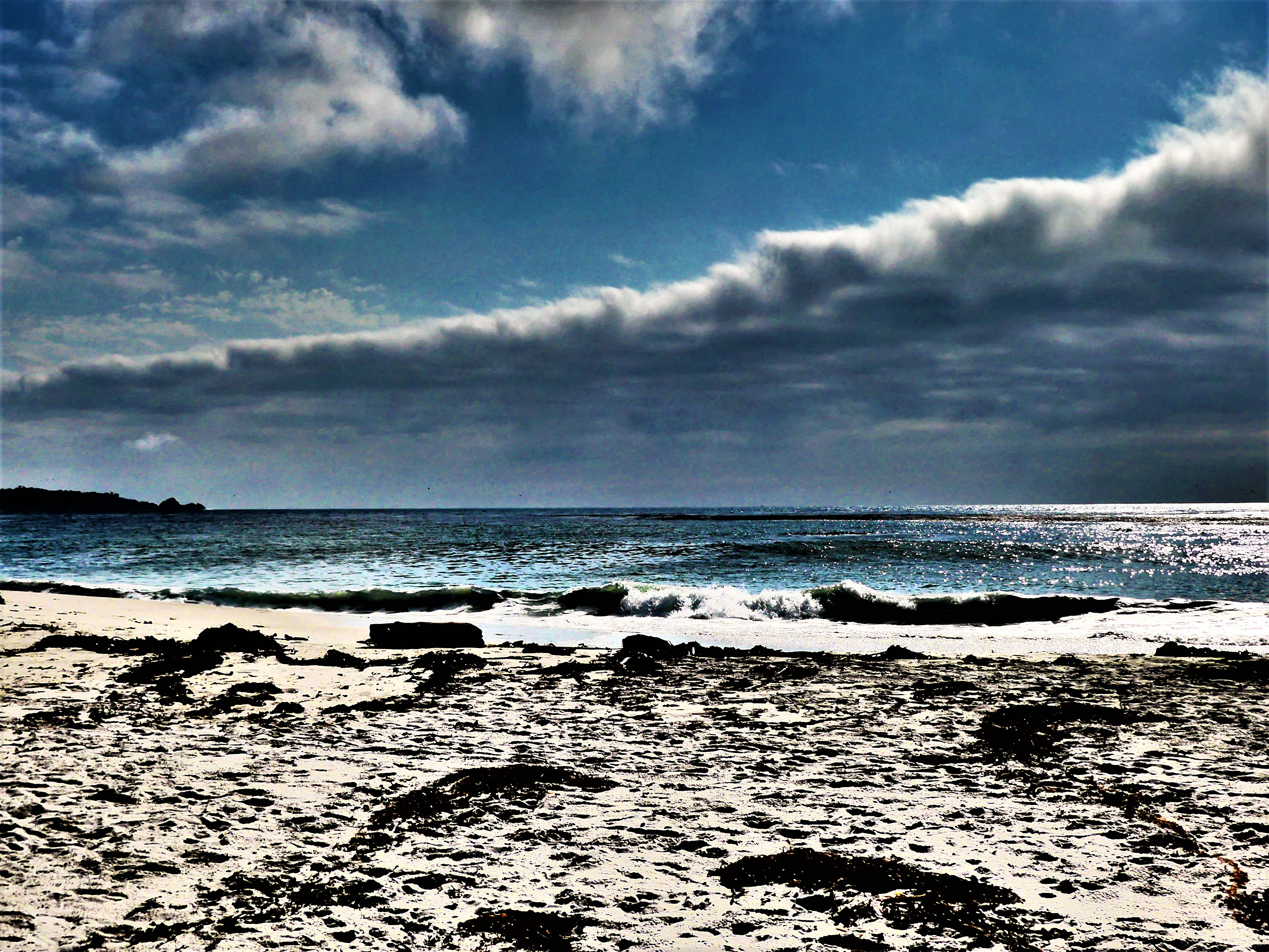 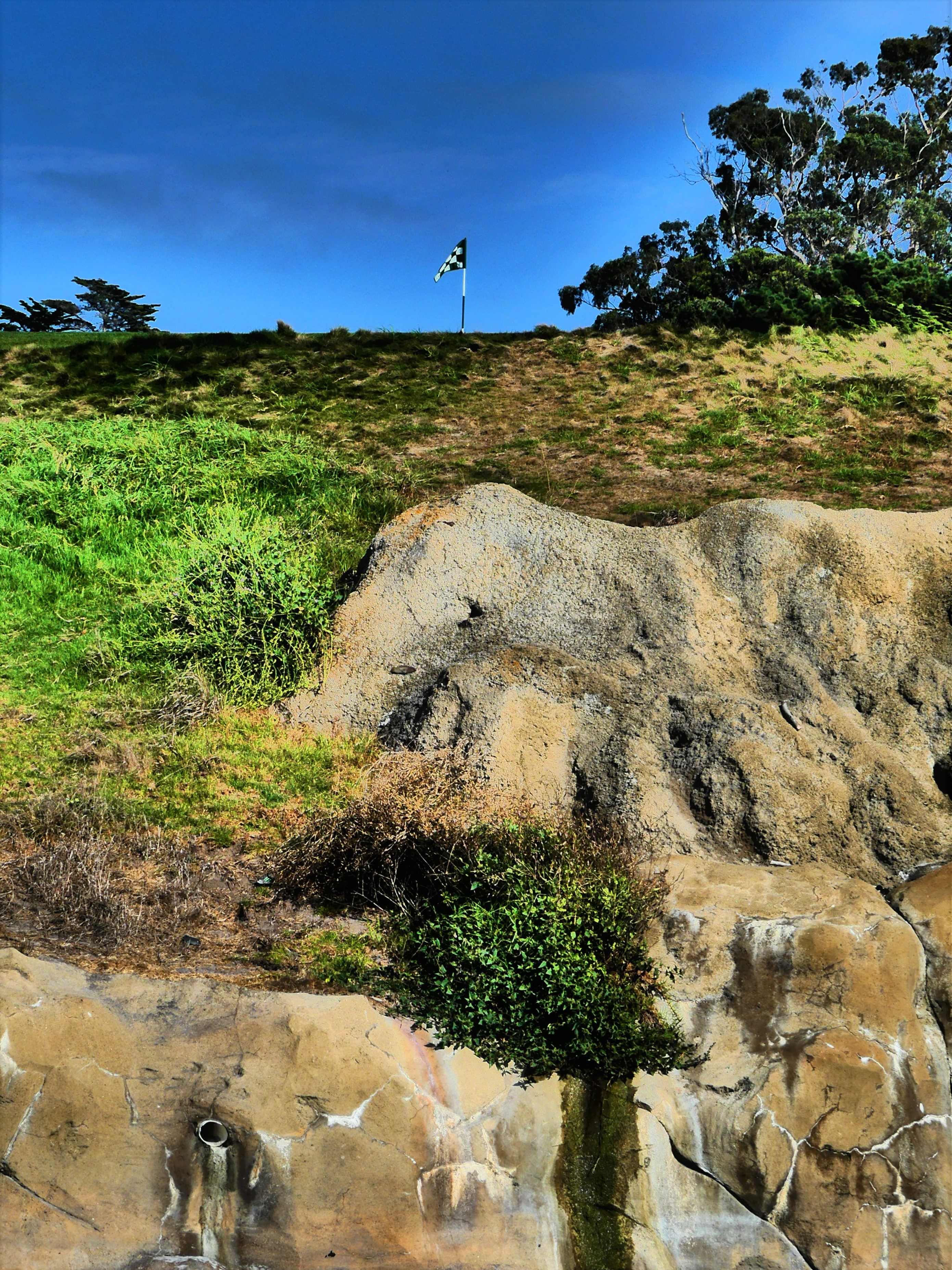 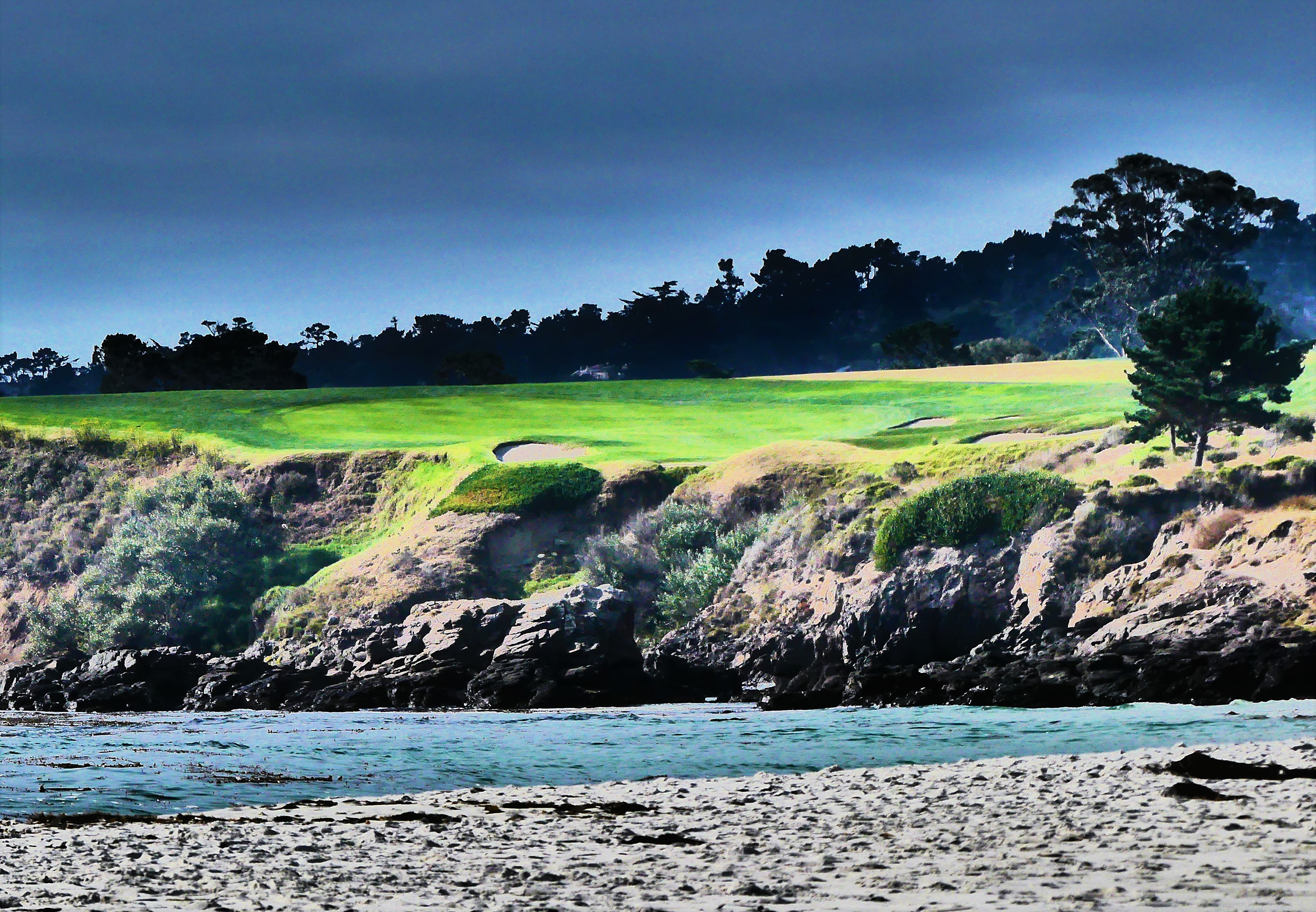 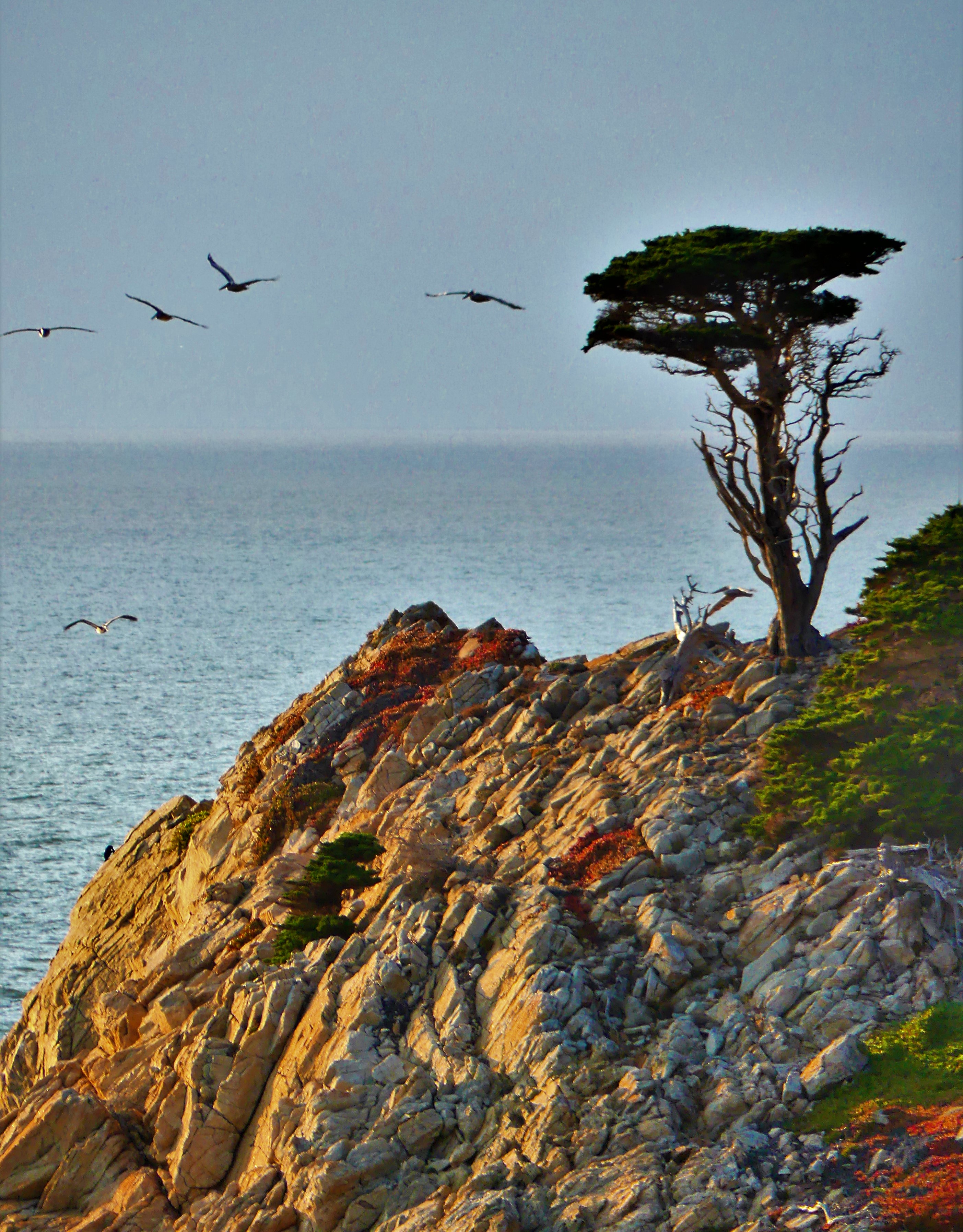 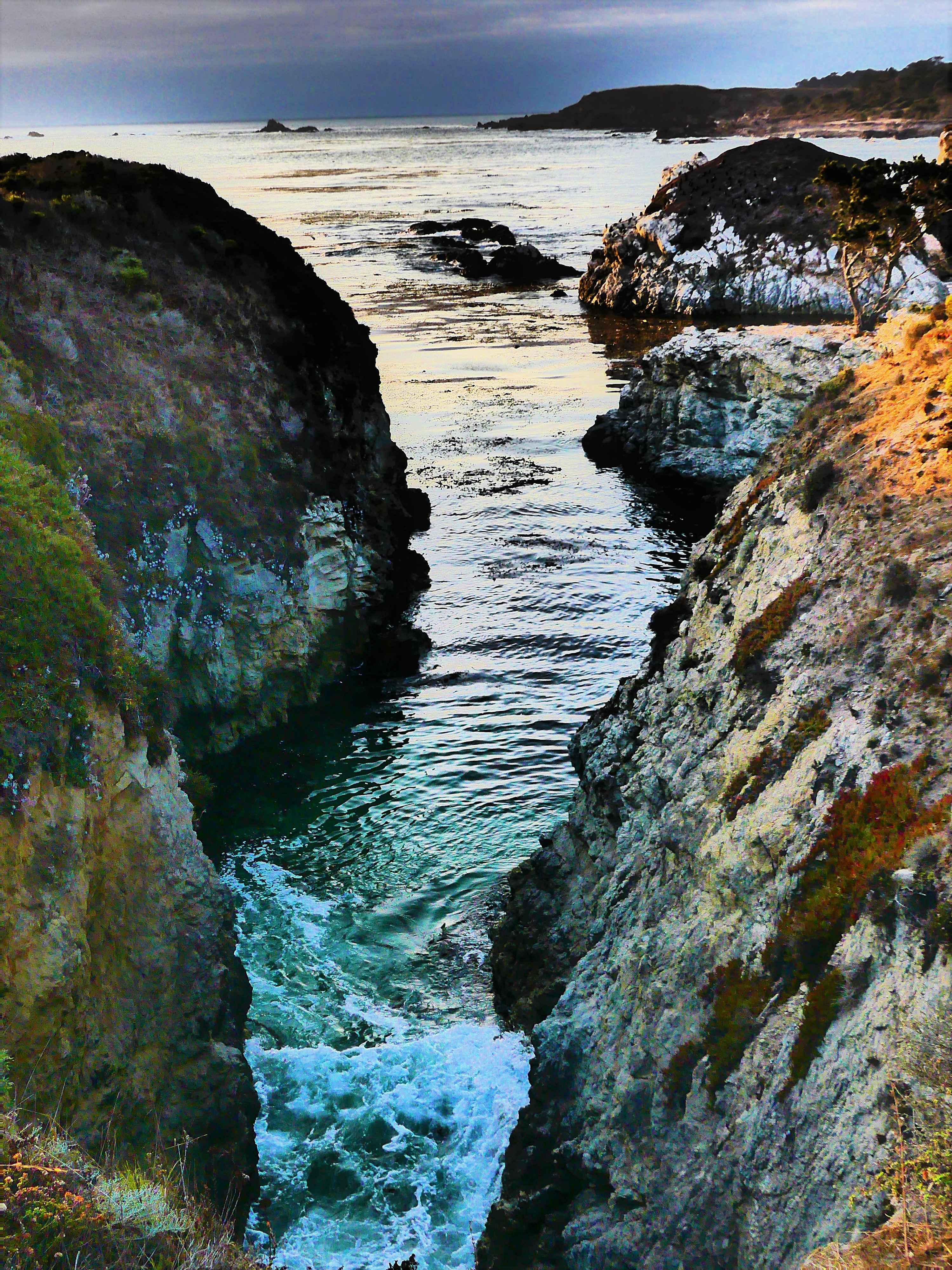 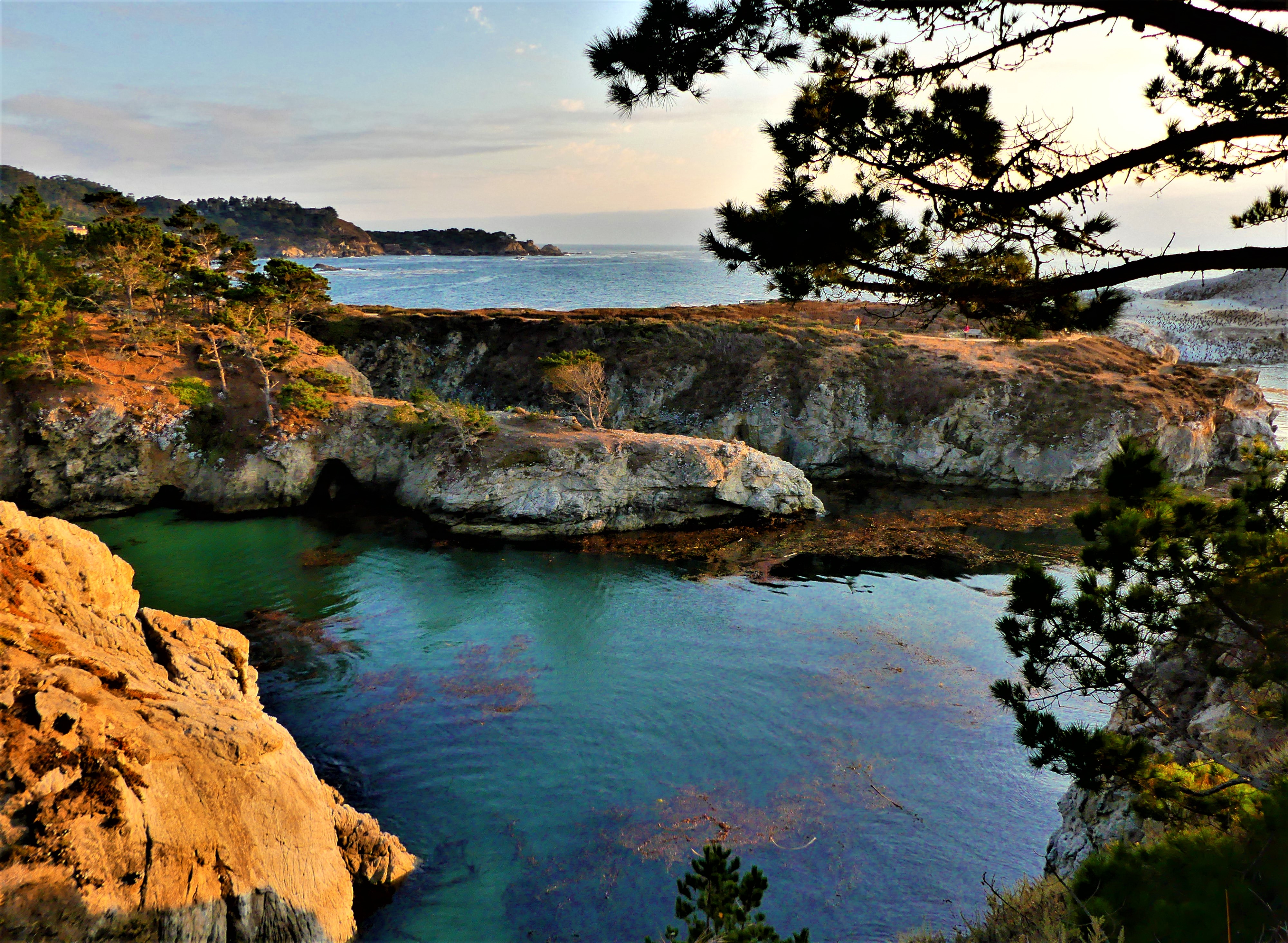 When will this smoke finally dissipate? I already know the answer…the question was rhetorical. As of today, 74 fires are burning out of control across the western part of America.

For those active fires reported on since Aug. 28 it amounts to 1,464,548 acres actively burnt or burning.

Leah and I have been in the fire zone for over a month–always one-step ahead of the next outbreak–but fire finally found us at Yosemite National Park. Today, the evacuation of Fish Town was lifted, but steps are still being taken to prevent fire from invading Yosemite’s sacred Mariposa Sequoia Grove. Fortunately, Merced and Tuolumne groves remain unaffected. 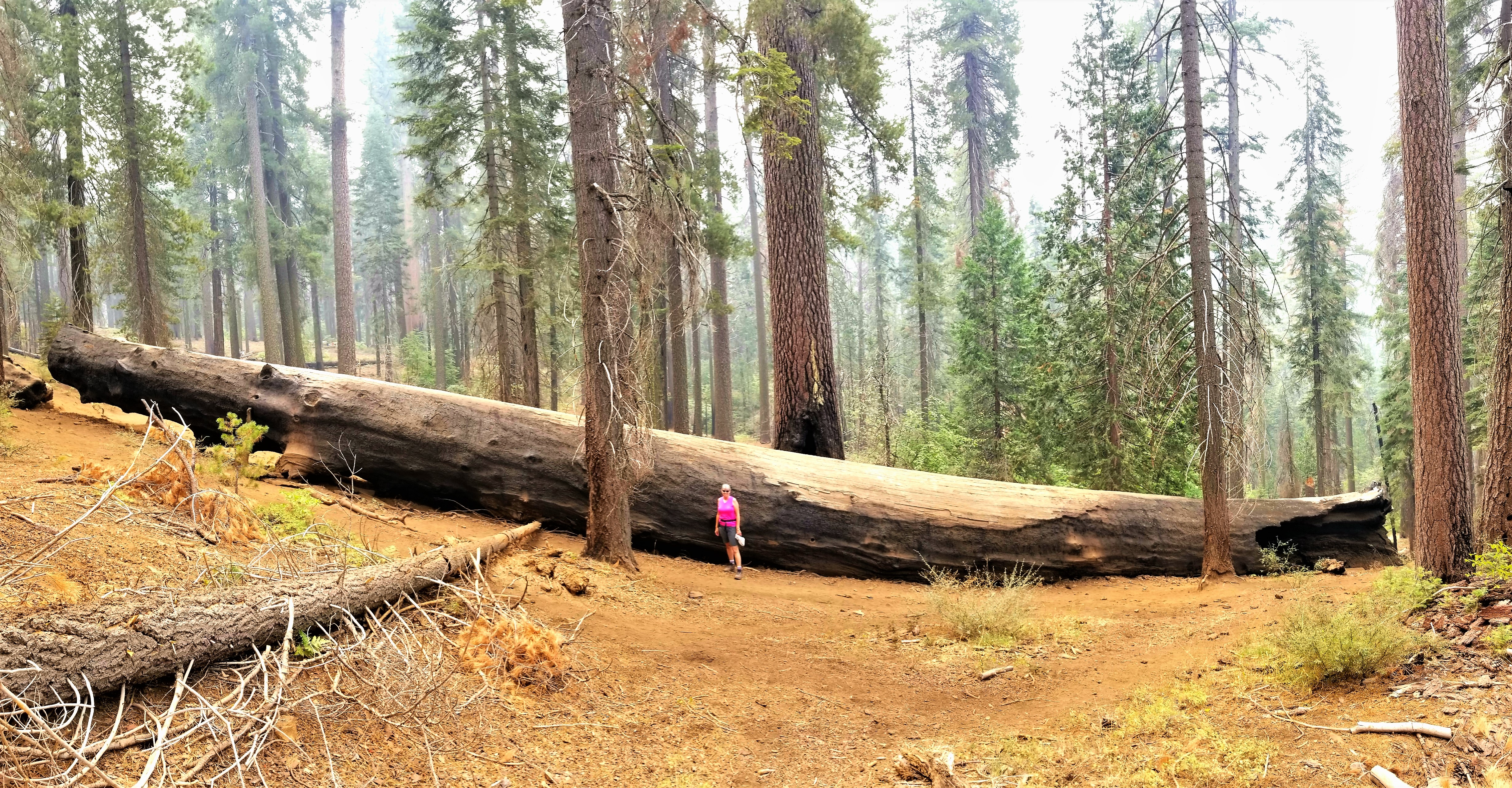 The air is filled with smoke. It’s impossible to ignore…it permeates everything. And nothing stays clean overnight after the ash quietly coats every surface by morning. With the winds blowing, mountains appear… 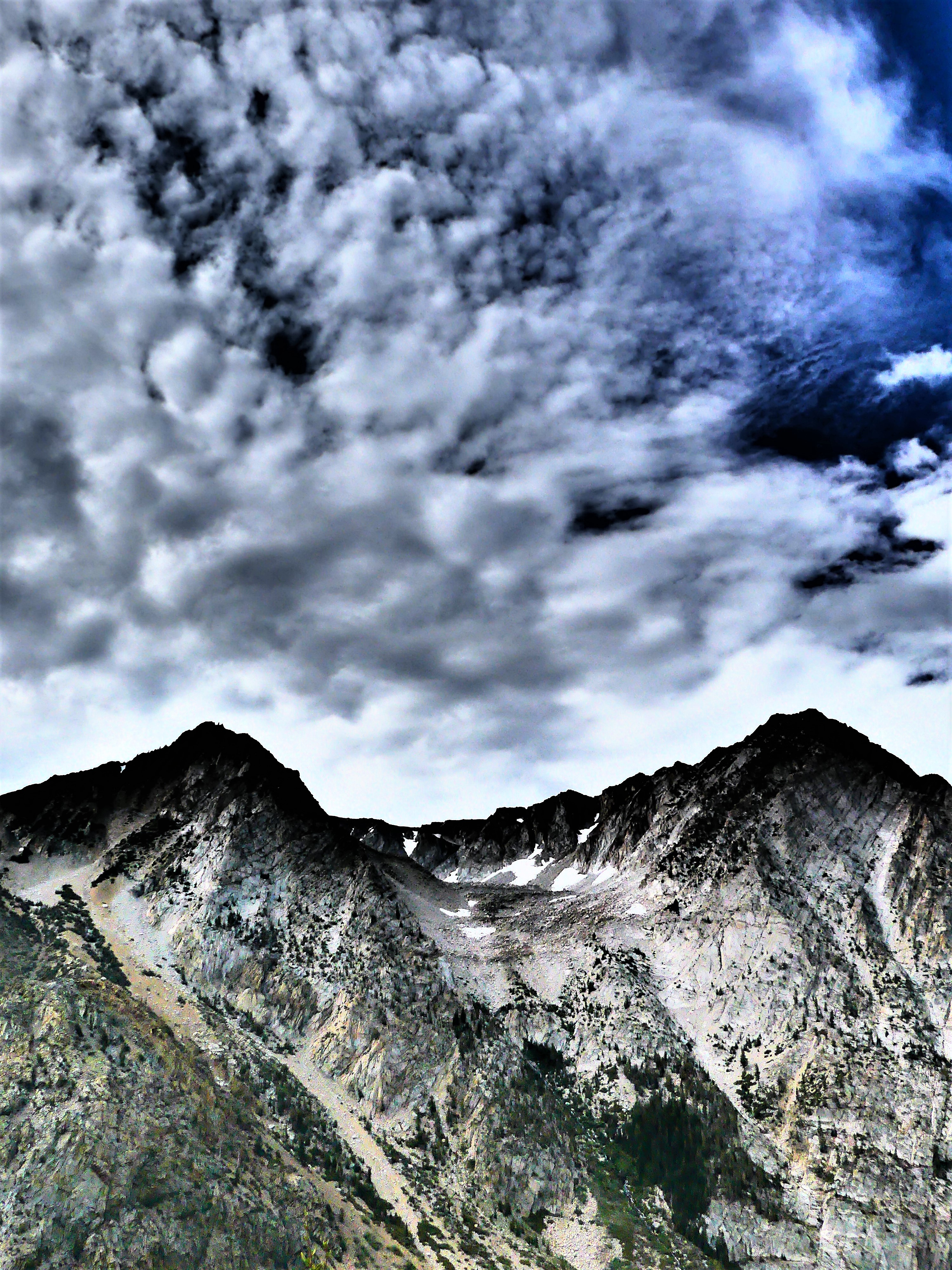 and disappear under a gauze of gray in minutes. 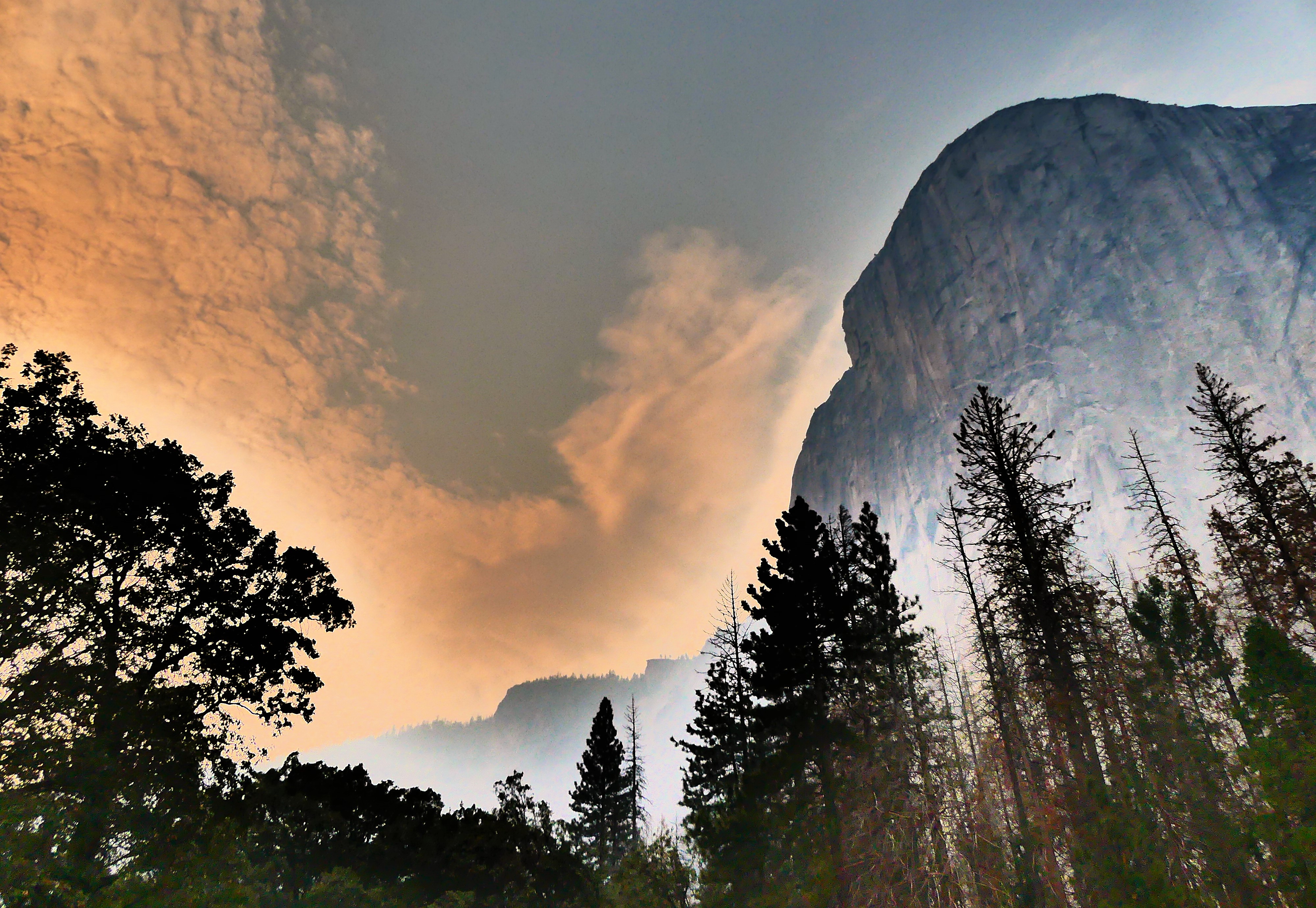 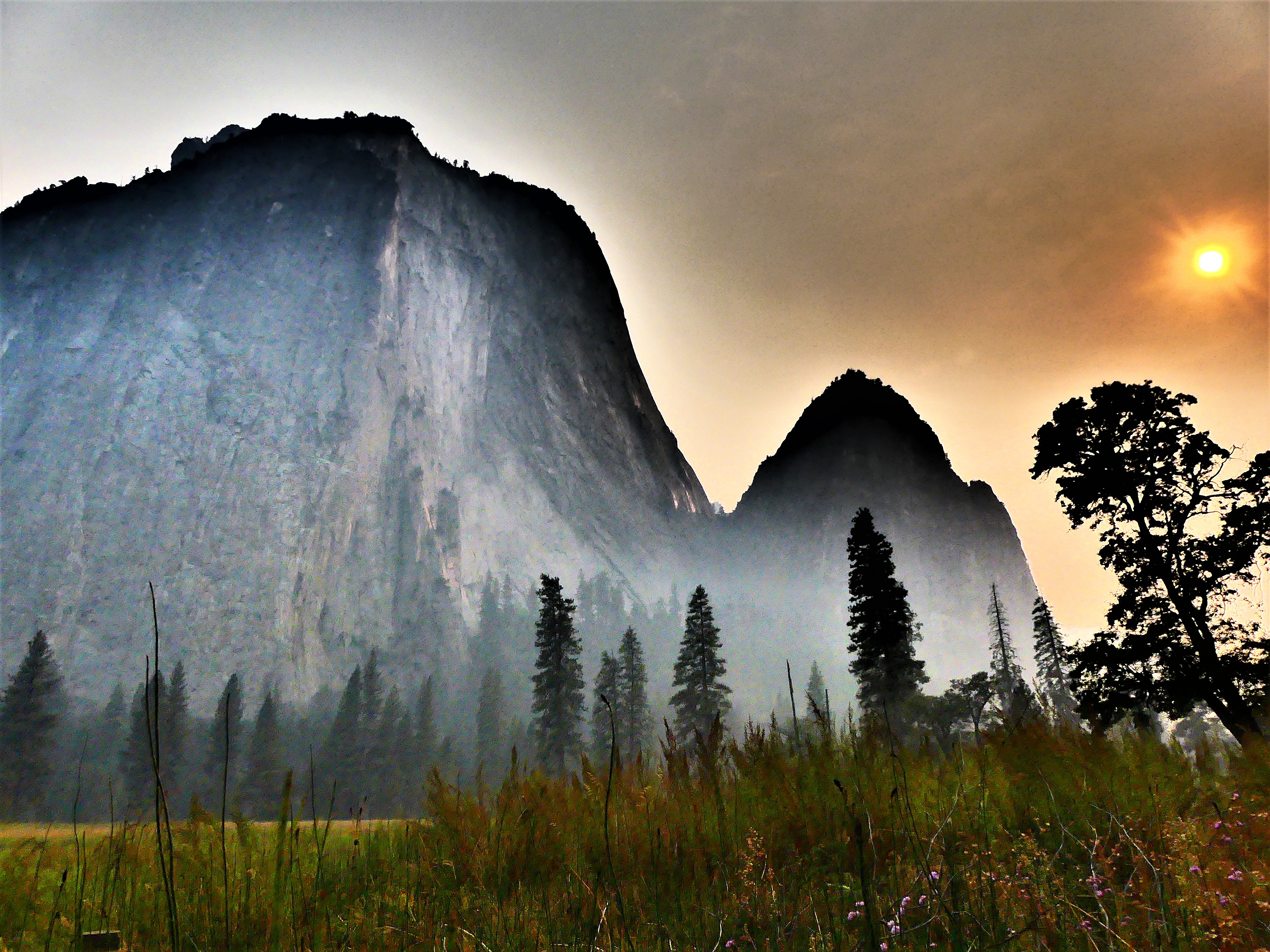 On a good day, the sun will sometimes break through,

if only to tease the highlights from the shadows. 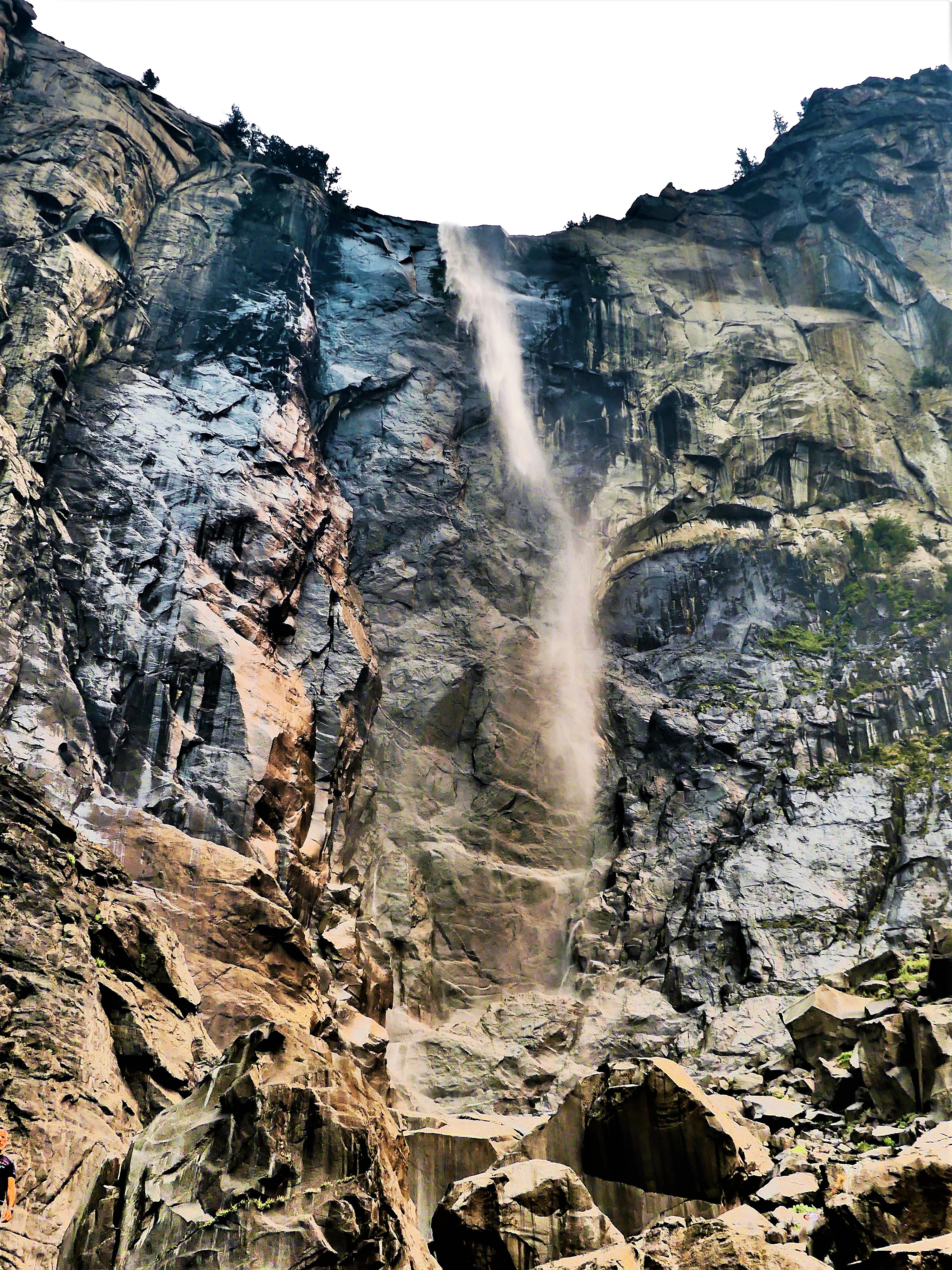 But the sky is fickle…

It leaves us waiting …and wanting more, with no guarantee that the sun will return–until it means accepting the best of a bad situation.

Perhaps waiting has value if it slows us down, and gives us a little more time to appreciate what’s in front of us.

Theodore Roosevelt National Park is a tribute to the man who became a conservationist out of his love for the North Dakota badlands. In fact, he credits his North Dakota experience as early preparation for his ascension to the Presidency. It’s easy to understand Roosevelt’s attraction to the hardscrabble prairie, 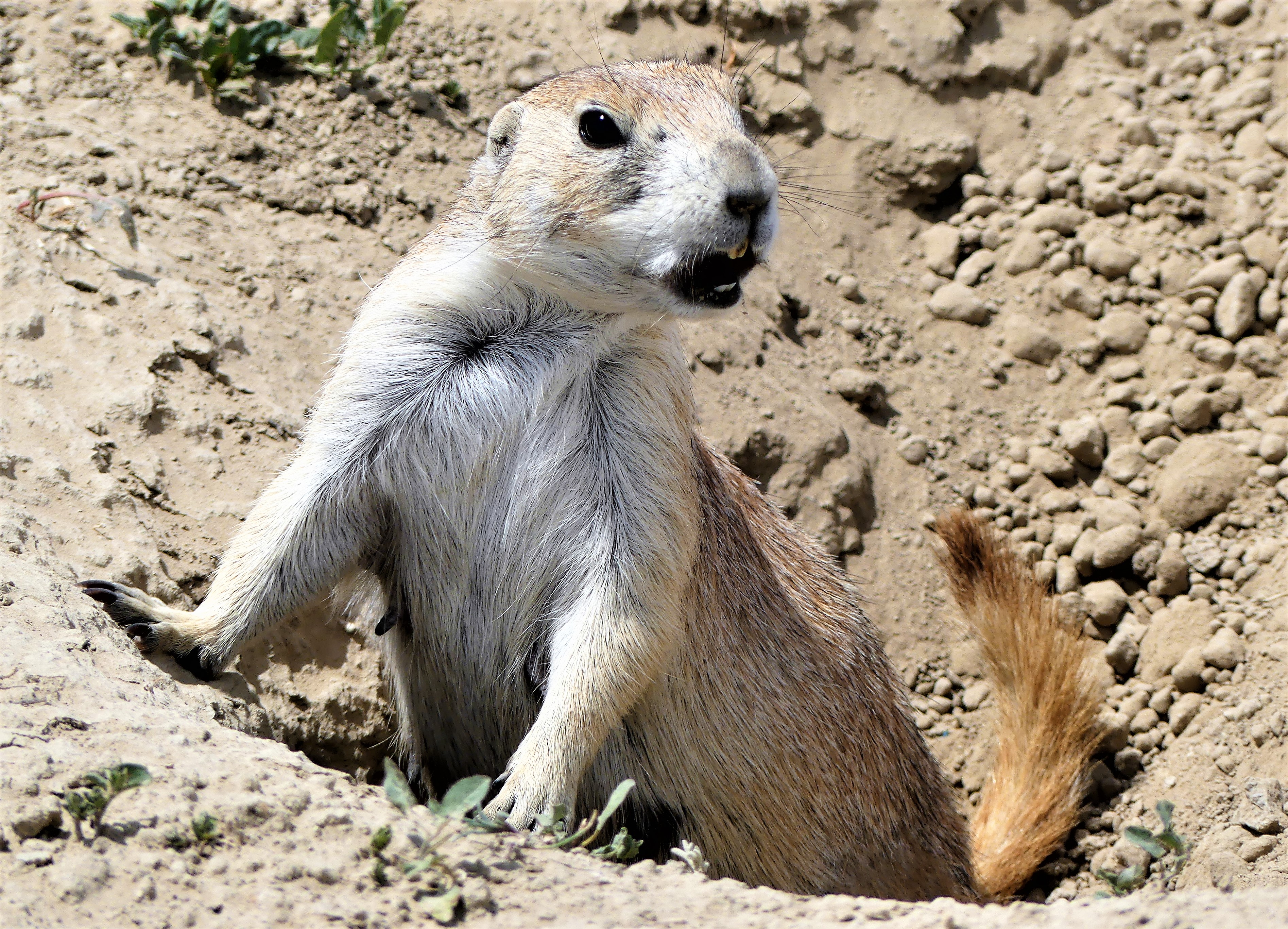 the steep rolling mounds of shrubs and cottonwoods,

the wrinkled cliffs with ribbons of paint, 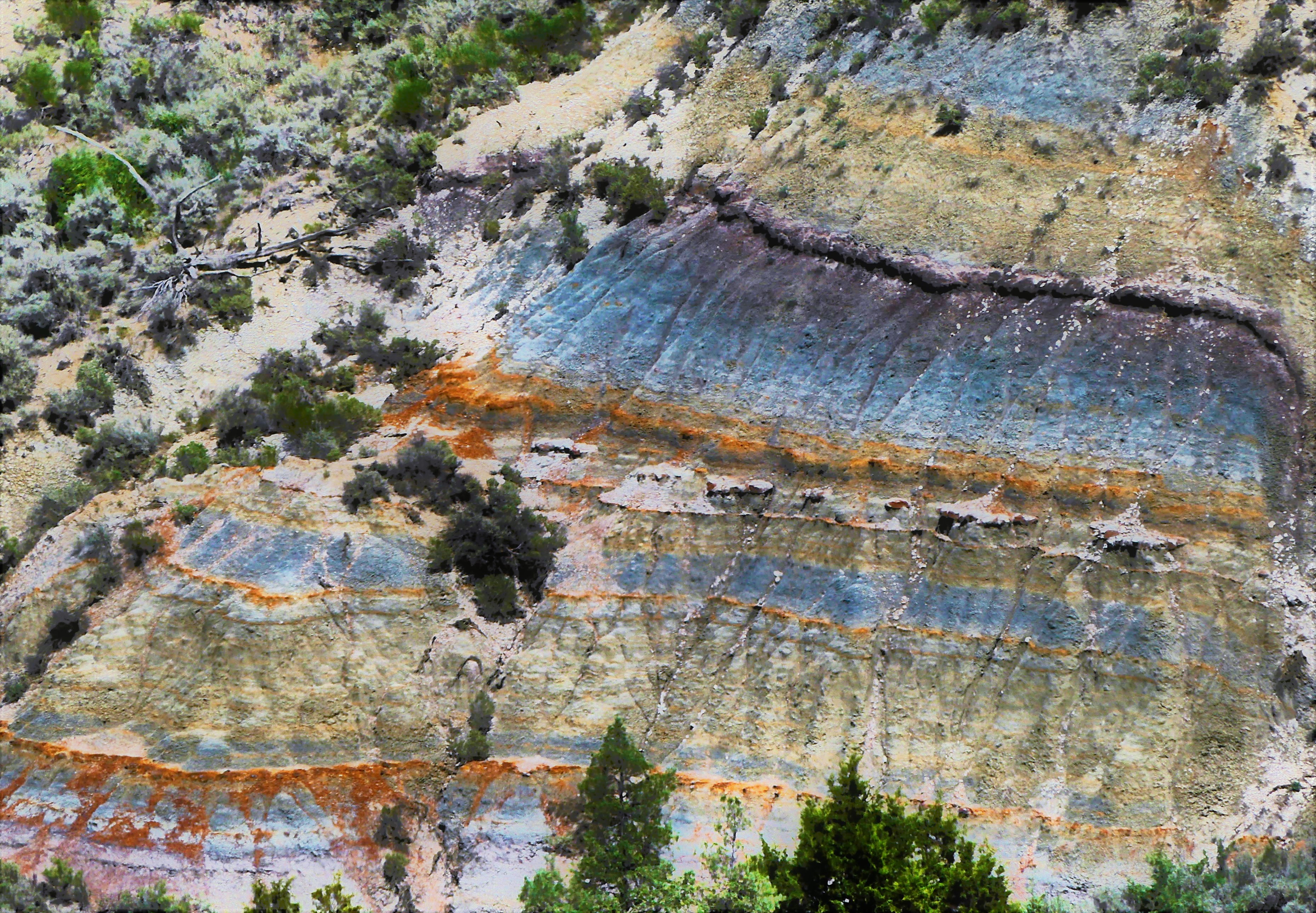 and the densely populated wildlife that freely roam the roads…

While not a park that is overwhelming in beauty, it is a park that speaks to the power of preservation, as herds of bison, elk, bighorn sheep and feral horses have been reintroduced to the landscape, and continue to flourish. 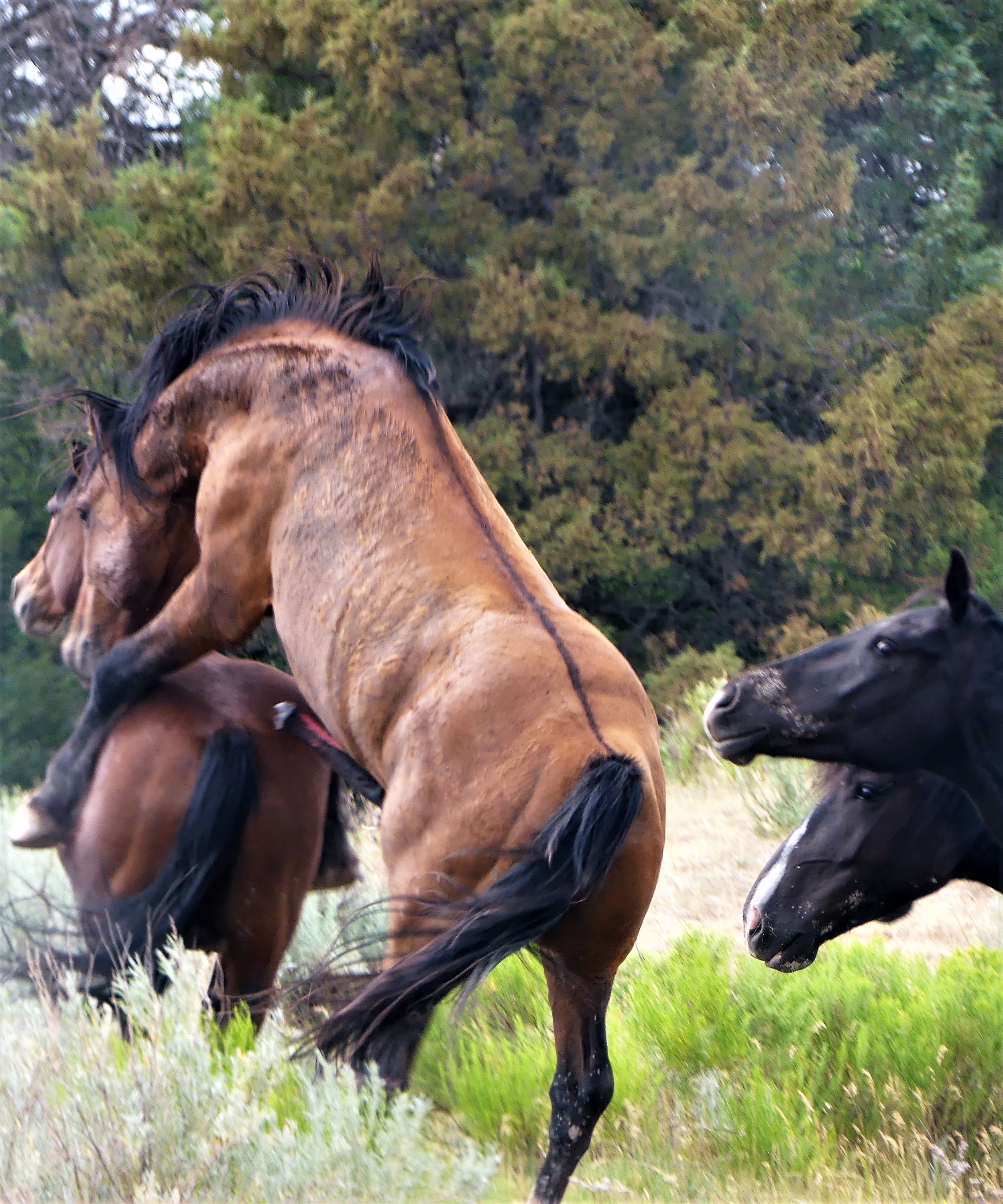 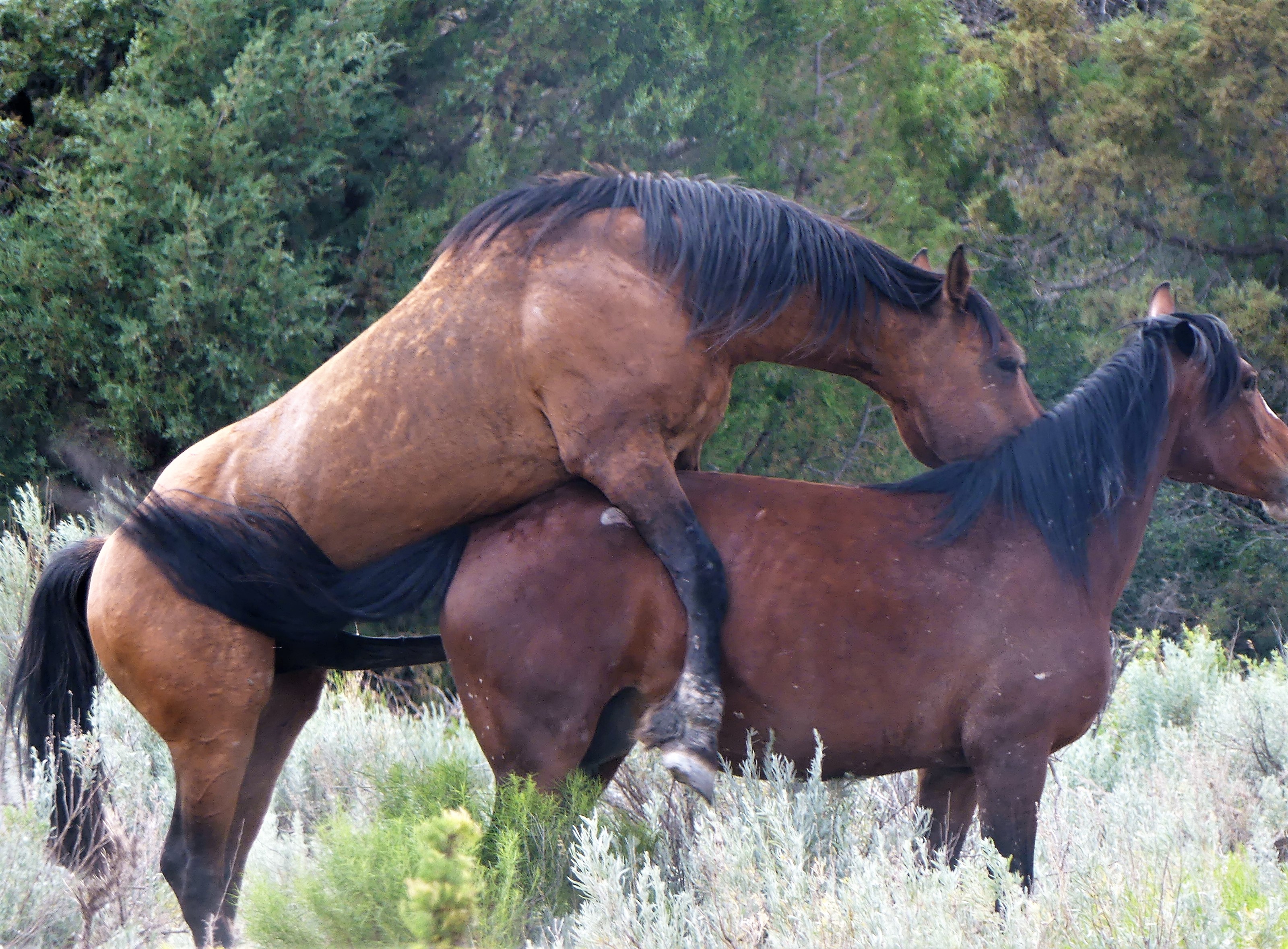 There is a solitude and serenity that surrounds the rugged territory that originally attracted Roosevelt to the area. Fortunately, the sparse crowd allows the same chance for an immersive covfefe with the wilderness, where the quiet wind carries an energy that seems to rejuvenate the senses and soothe the soul.

Leah and I were breaking up with Yellowstone Park. In the beginning, the park had welcomed us and offered us sanctuary. At times, it made us dizzy with excitement. Despite all the wonderful things the park had brought into our lives (the scenery, the animals, and the natural oddities), there was little doubt that the park was making it hard for us to breathe… most noticably by the basin springs belching sulfurous gas.

From the beginning, it was everything we could ever hope for–the park revealing its majestic views of the mountaintops; the regularity of the geysers; the explosive colors of the basin-bacteria; the rare excitement that only a new relationship can bring. And we were intoxicated by all of it.

It was easy to overlook or forgive some of the park’s flaws during our honeymoon phase: the thinning forests ravaged by fire, the intensity of the water from late winter thaw, and the wildlife fickleness. But none of it matters when you’re blinded by the lushness of the meadows, the clarity of the water, and the immensity of the spectacle.

But somewhere along the line, our relationship with Yellowstone soured. While we knew it was unreasonable to expect monogamy from Yellowstone–knowing that 2.2 million acres should be enough to go around for everyone– we couldn’t help feeling neglected, thanks to all the other visitors who were vying for the same attention.

I feared we were growing apart from Yellowstone. Could it be we were no longer compatible? Were our expectations too high and unreasonable? It’s true there were things we wanted from Yellowstone that the park was unable to deliver. In addition to less traffic and fewer people on the trails, we wanted shorter lines at the entrance gate, and quicker service and lower prices at the restaurants. Was that too much to ask for?

Bottom line, we were no longer getting along. The relationship was too one-sided. Leah and I were putting so much time and energy into the park, and not getting enough back in return. The memory of driving three hours, only to travel thirty miles left us disappointed, and frustrated. The imagined traffic violation from Ranger Painter felt like a “double-cross”.

We felt rejected by the park.

But I was still willing to give the park another chance. I thought that things inside the park could be different if it wasn’t a weekend–when the park wouldn’t be as stressed out. Leah, on the other hand, wasn’t as forgiving. “I’m done!” she announced. “I’m not going back.” She was determined to make a clean break of it.

“But it’s not entirely the park’s fault,” I argued, already suffering from an acute case of separation anxiety. However, in my heart I knew I was covering for a park that had let me down.

Maybe Leah was right. Maybe we should cut our losses, and stop beating ourselves up. We needed to put this abusive relationship behind us.

We agreed that we needed to put some space between us and Yellowstone to give us some perspective. A respite from Yellowstone would help to clear our minds and cleanse our hearts of our frayed feeling towards the park. I was tired of feeling angry at Yellowstone, and I wanted the magic to return.

As with any break-up, it’s always best to confide in a friend to gain clarity. Fortunately, a friend living only 100 miles away from West Yellowstone allowed us to overnight at his two-bedroom condo in Driggs, ID. While it was good catching up with George, it was also gratifying standing under a full-sized shower with constant pressure.

We discussed our soured relationship with Yellowstone over dinner with George, Kate (his daughter), and Kate’s husband Kevin, a full-time fishing guide during fishing seasons. It was an awesome reunion, sitting outside in a restaurant garden setting during the summer solstice.

“Crowded park conditions are to be expected this time of year, considering the park’s popularity,” announced Kevin. “It’s the best water for fishing right now, and it’s where I take my clients. It’s simply the best place to go.”

“I wish we had the luxury to return during a different time of year, but this is the only time we’re passing through,” announced Leah.

“I think that sums it up,” I added. “It’s really now or never. Sometimes you have to give a little to get a little,” I opined, sounding too much like Dr. Phil’s proxy.

The following day, we headed over the Teton Pass into Jackson Hole for bagels. We casually walked through town, bracing ourselves for the long ride through Teton National Park and into Yellowstone.

But we had to stop at Ox Bow for one last glimpse of the austere grandeur of the Tetons. 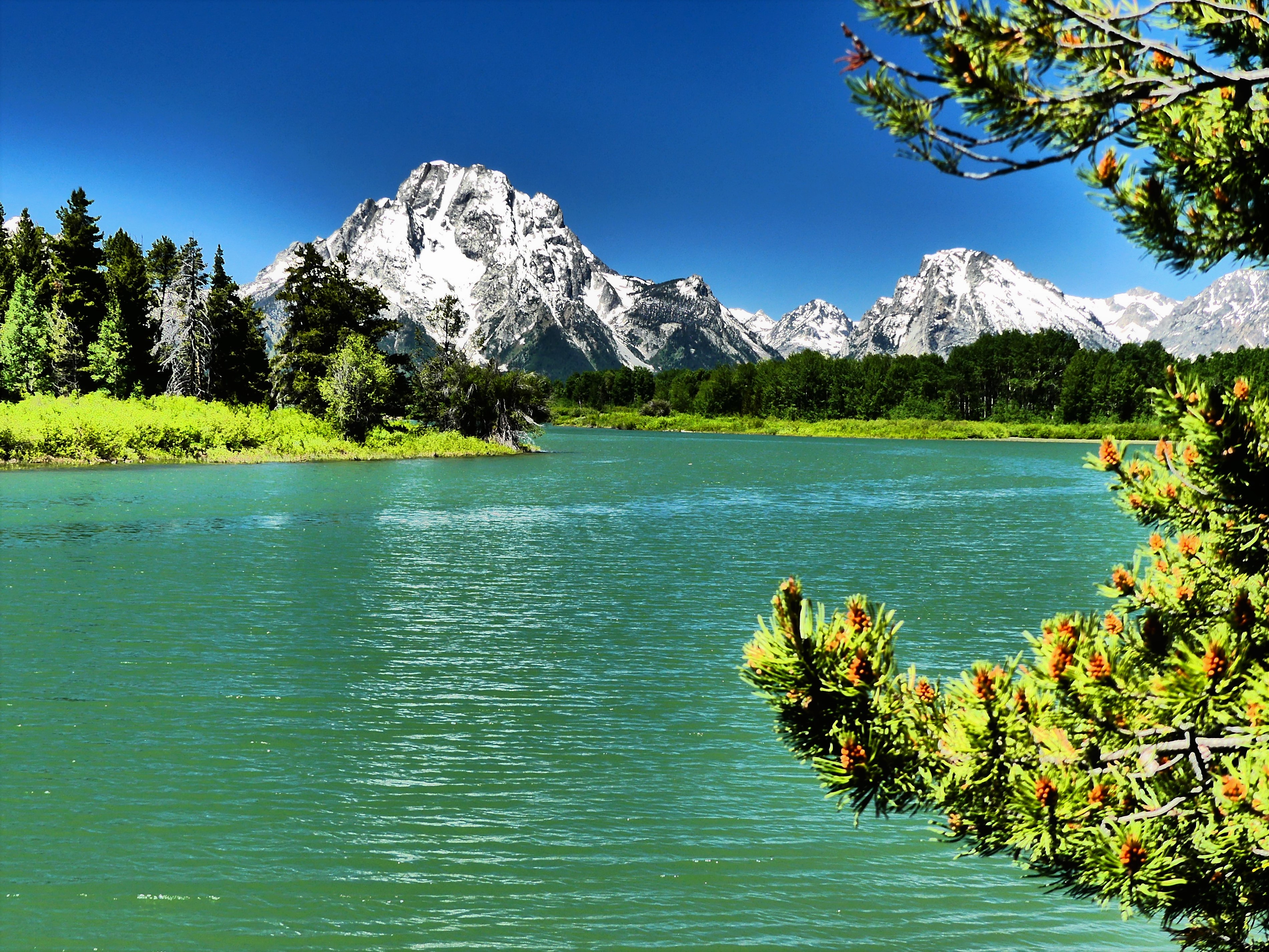 By 1:00 pm, we crossed over to Yellowstone’s South Entrance. where an idle gate ranger awaited our arrival. Leah and I exchanged an optimistic glance, unwilling to jinx ourselves by stating the obvious. After a quick bite at Grant Village, we continued around West Thumb, where the road hugs Lake Yellowstone, showcasing its bedazzling blue splendor.

We justified a stop at Mud Volcano to stretch our legs… 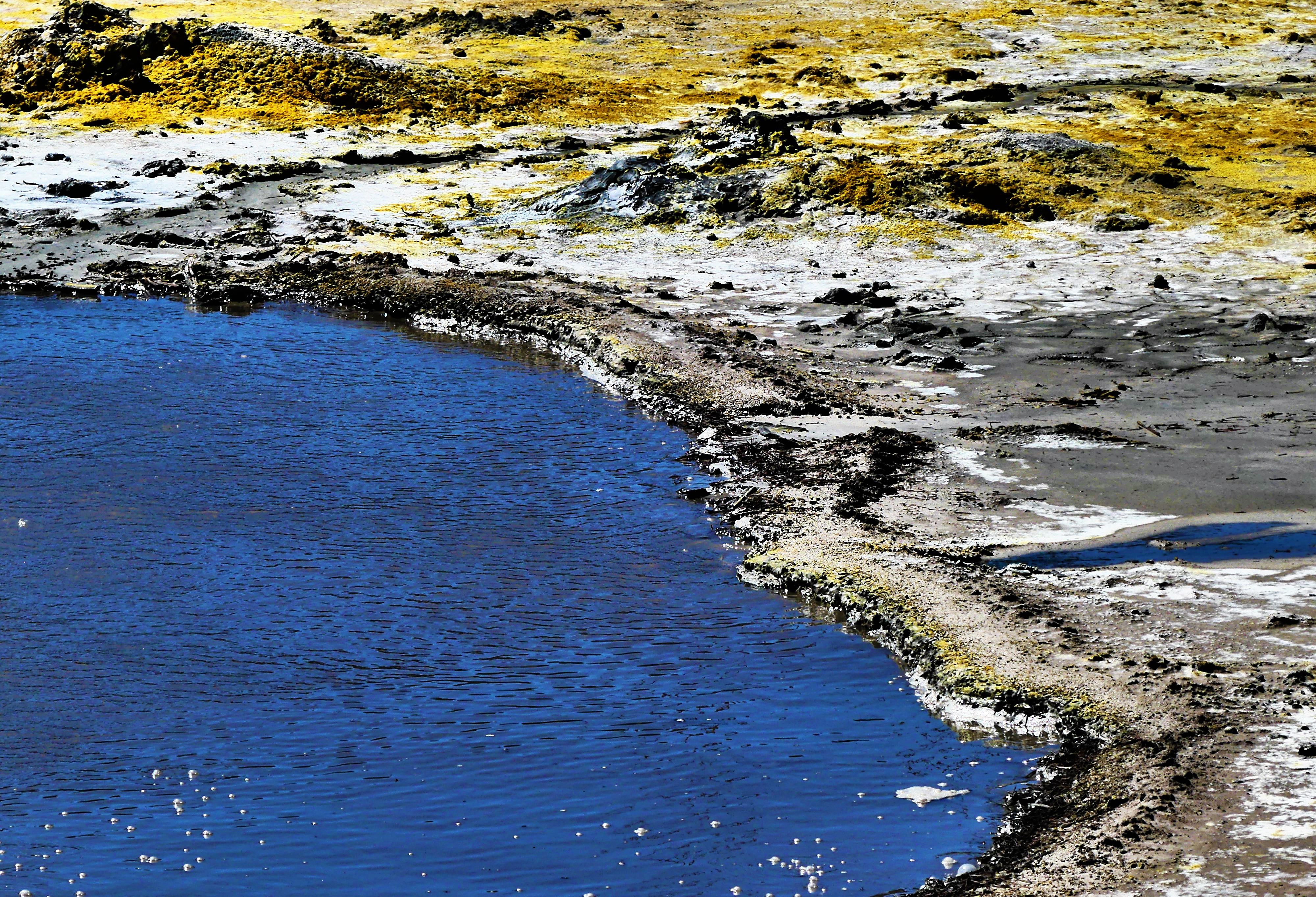 …before finishing with a rim trail hike to Lower Falls, and bearing witness to the power of water cascading over a sheer cliff,

then crashing against the brush-stroked walls of Yellowstone’s Grand Canyon.

Yellowstone was the first National Park signed into law by U.S. Grant in 1872…

and you never forget your first love.