GPS was set to Zona Arqueológica de Tulum, but upon arrival, the crossover was still under construction. Following signs to the next Retorno, I backtracked to a bustling turnoff. This looked nothing like the Tulum I remembered from 5 years back. Heck, Tulum used to be all jungle 20 years ago!

But now, it resembled a spider web of agents in uniformed shirts carrying clipboards and shouting directions in Spanglish. Our rental car was stopped short of the road to the ruins, where we were met by Freddy, a representative for Santa Fe Beach Club, whose job it was to redirect us to his business.

According to Freddy, my choices were limited since cars could no longer advance. Either I could park nearby for $20 and walk 1 km to the ruins, or pay $40 a head, granting us: closer parking; National Park entrance passes; access to the Beach Club–including toilet and shower provisions, one drink (choice of water, soda, or cerveza), and a half-hour water tour, followed by reef snorkeling (all gear provided).

“No way!” everyone voiced emphatically.

All of us were content to walk to the ruins for a fraction of the cost. As I prepared to park in an already overcrowded lot, Freddy offered us a winning alternative: the same all-inclusive package reduced to $27 per person–a 33% discount–traditionally offered to Mexican residents. Score! and lesson learned. Always negogiate the price!

While the ruins piqued their interest, the prospect of snorkeling atop the Mesoamerican Barrier Reef (largest reef system in the Western Hemisphere) sounded especially promising to Noah and Nate. After I revised our initial itinerary–which would have included a stop at Yal-ku in Akumal, with snorkeling in a brackish lagoon surrounded by sculptures–I sensed their enthusiasm to swim in the Caribbean.

I followed Freddy’s directions to Tulum’s Hotel Zone, and turned into a narrow seaside road, offering access to scores of Tulum’s boutique hotels and yoga retreats.
Unfortunately, Tulum’s current popularity may prove unsustainable, as it’s recent explosion of tourism and new resort construction have overtaken the town’s current infrastructure capacity, turning it into a eco-nightmare.

We drove to the término, reaching our destination…

and luckily found a coveted parking spot along the mangroves by the beach entrance. 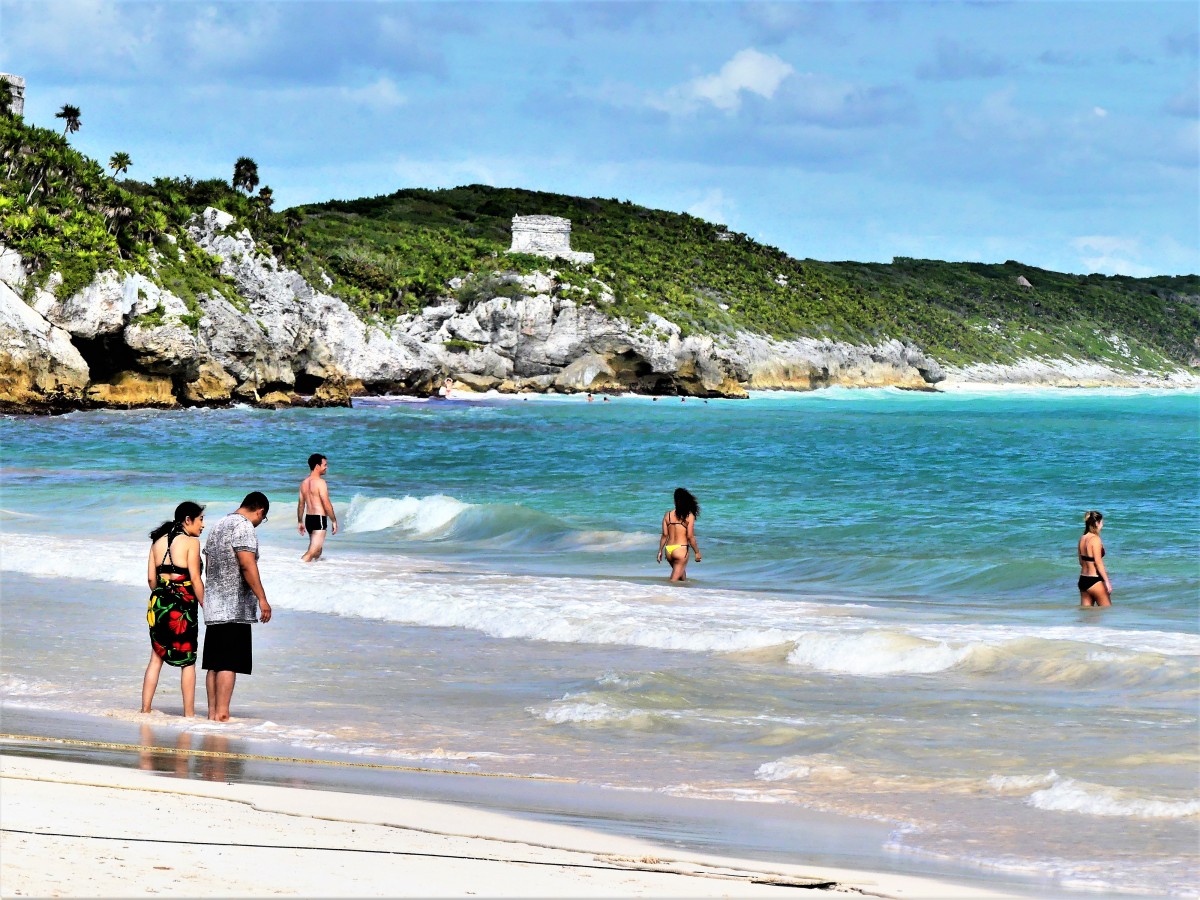 We walked the remaining half mile to the National Park on a rutted lane shared by cyclists, and local vendors selling water and trinkets.

Ordinarily, the surroundings are packed with tour groups and spectators, but we arrived on a calm day, without the usual hubbub. 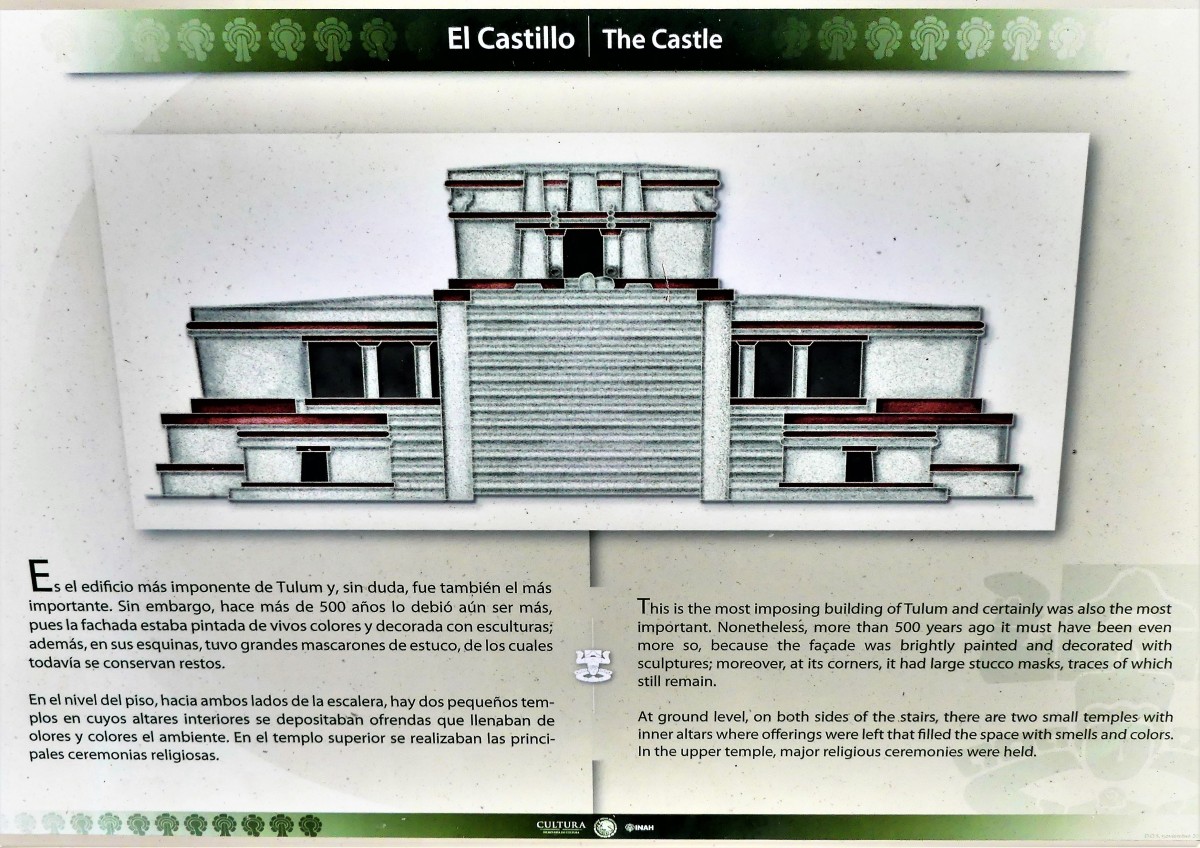 In fact, the landscape was relatively quiet, and devoid of humanity… 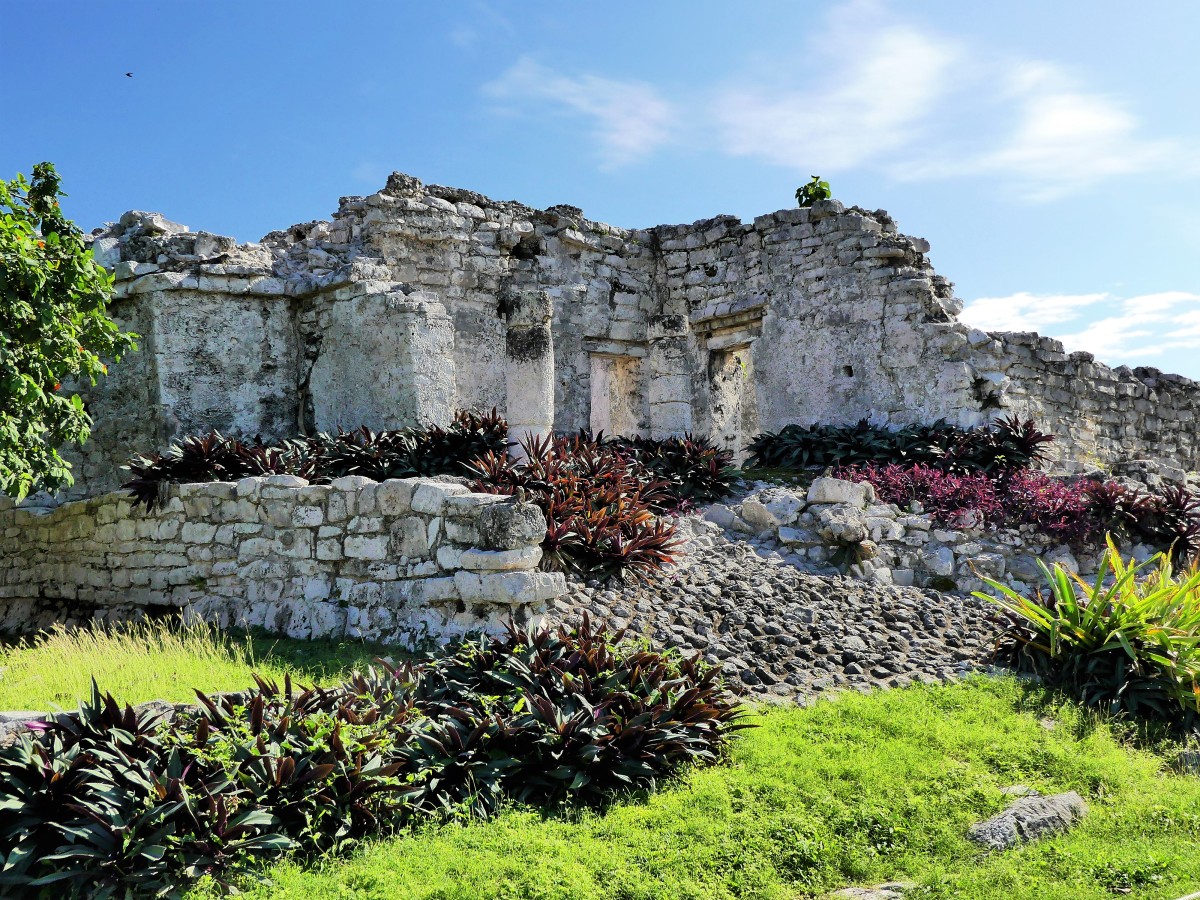 except when I wanted an isolated picture of family.

After meandering through 13th century wreckage for more than an hour, we turned our attention to the beach, where the turquoise water looked so inviting.

Ruins Beach is accessible from the cliffs above, but 500 meters south, lies Sante Fe Beach, one of Tulum’s original hangout spots before the tourism boom…

and that was our next destination.

Per Freddy’s instructions, we sought out Captain Harrison, and lounged on PVC beach chairs under a delapidated canopy, waiting for our excursion on Brenda or half a dozen skiffs just like her.

Leah stayed on land after realizing her bonine fix had worn off, but Noah, Nate and I eagerly climbed aboard.

Our captain motored out to open water, 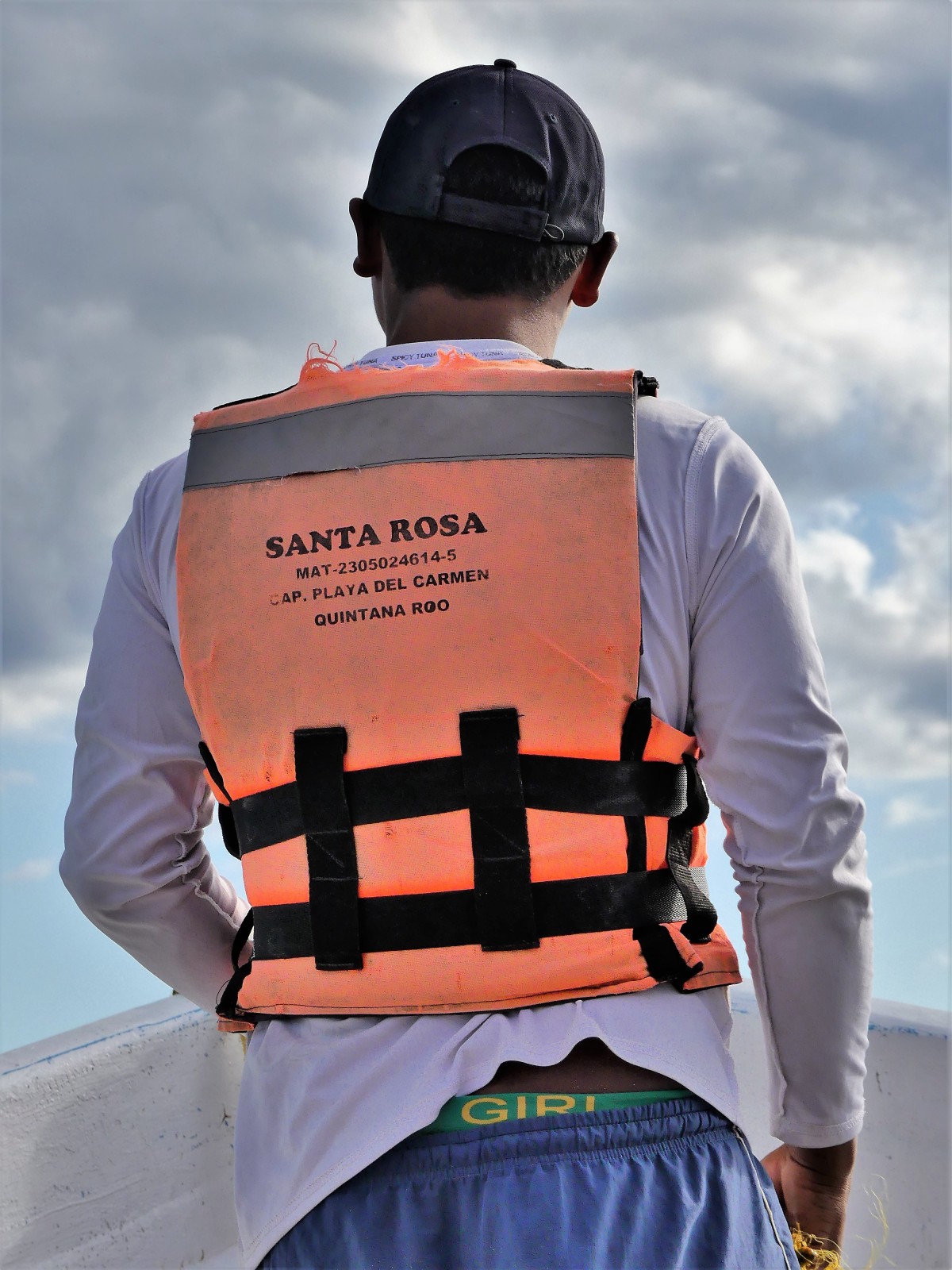 and offered a summarized history of the Mayans, and importance of Tulum…in Spanish.

Soon, we headed for the reef, where others had formed a floatilla of snorkelers.

while I remained on the surface, shooting pelicans… 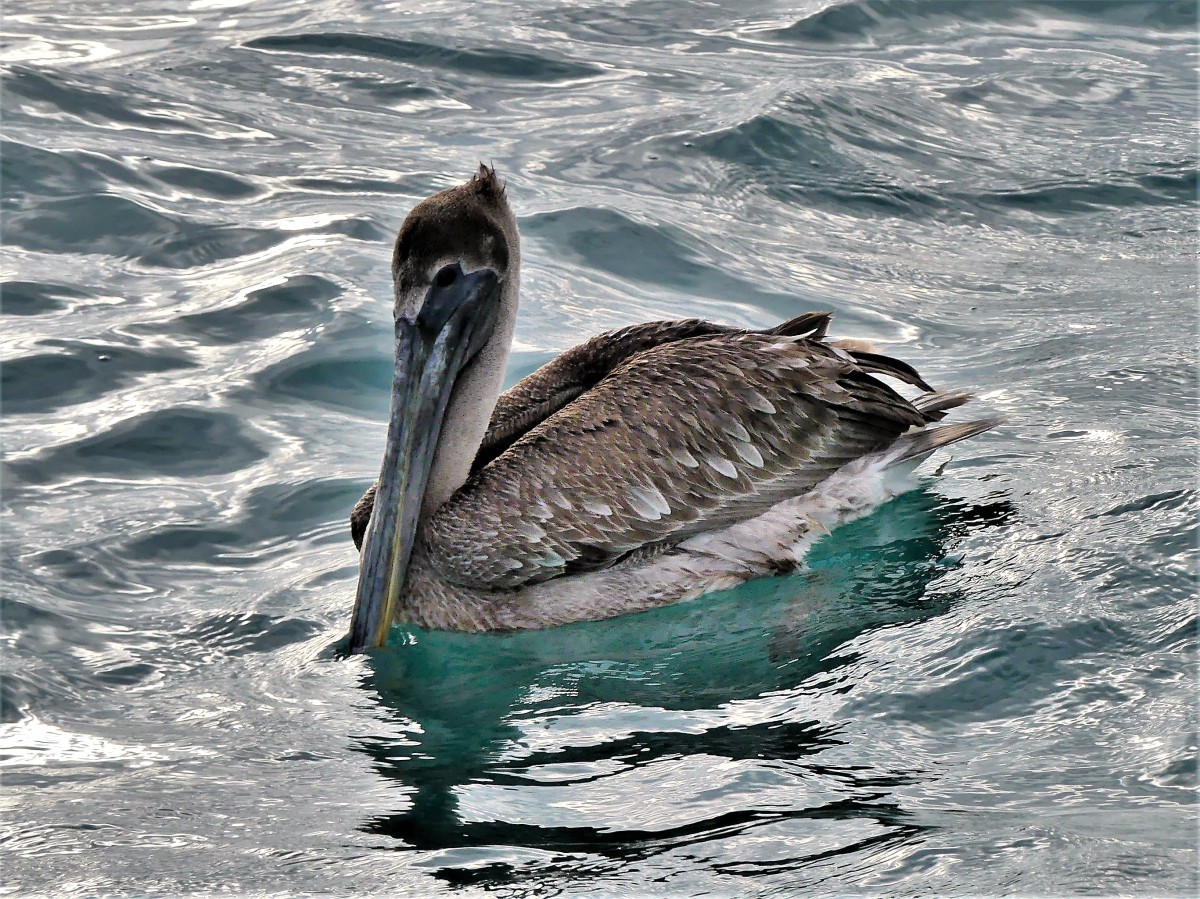 and keeping track of my sons.

Once ashore, it was time for a beer and a shower. Despite the primitive outdoor plumbing on the beach, we concluded that $27 a head was a better bargain than any of us could have ever imagined for a family vacation adventure.