Iceland’s oral and written history is steeped in mythology and folklore, and rooted in the country’s natural wonders. From the time Garðar Svavarsson, a Swedish Viking first settled in Húsavík in 870 AD, Icelanders have imagined a world where phenomena is best interpreted through their sagas of mysticism.

Iceland’s first settlement succeeded in the second half of the ninth century because of adventurous Vikings from Denmark and Norway who were looking for a fresh start in a new world that offered opportunity, security, and stability. A parliamentary assembly of regional chieftains gathered in Thingvellir in 930 to form the Althing (assembly of free men), and ruled as the unifying body of this “free state” until 1264.

Originally, the Althing accepted Northern Germanic religion or Goðatrú (Truth of Gods) which resembled the religion of their homelands. Sacrifices were overseen by landowners/priests in temples and shrines to appease the gods and spirits, of which Thor and Odin were most popular.

By 1000, the Althing rejected paganism and enacted Christianity as the religion of the land under pressure from Norwegian king, Olaf Tryggvason, who embargoed all trade between Icelanders and Norway and held the sons of chieftains as hostages unless Icelanders accepted baptism.

Yet, despite the introduction of Christianity, pagan influence was not easily erased, and still informed how settlers reacted to their old surroundings, and their new spiritual allegiance.

For instance, when Leah and I discovered Dimmuborgir, a dramatic expanse of lava fields east of Myvatn,

we learned that the pillars were the creation of emptied lava lakes from an immense volcanic eruption about 2300 years ago.

But legend tells us that Dimmuborgir (or “Dark Castles”) was created by Satan after he was cast from heaven, and Dimmuborgir was the gateway to the devil’s “Catacombs of Hell.”

Also seeking refuge at Dimmborgir are the Yule Lads–13 offspring of Grýla and Leppalúði–who are regarded as trollish pranksters who eat misbehaving children before Christmas.

Jökulsárgljúfur National Park is another popular destination we visited that invoked the spirits and captured the imagination of pagan worshippers.

Jökulsárgljúfur, Iceland’s largest canyon, stretching 25 km long and 500 m across is the result of endless catastrophic flooding caused by an Ice Age eruption so fierce that its glacial ice cap exploded.

However, the Norsemen believed that Sleipnir, Odin’s eight-legged steed created this natural wonder by touching earth on a jaunt across the sky, leaving behind the impression of a massive hoofprint that became the canyon Ásbyrgi,

To the west of Ásbyrgi, lie the cliffs of Hljóðaklettar and its inhabitants, the mythical Huldufólk (Hidden People), who cautiously avoid sunlight, or risk the same fate of the elves and trolls who have turned into stone pillars from sun exposure.

Another example of trolls behaving badly can be found along the black sand shoreline of Vatnsnes peninsula in northwest Iceland. From a geological perspective, Hvitserkur is a 15-meter tall basalt monolith that’s been shaped by severe North Atlantic storms and constant temperature changes.

Although Hvitsekur resembles a drinking dragon, Icelandic folklore refers to the stack as an evil troll who raided a local church to silence its bell tower, but turned to stone after being caught by the sun’s early rays. The petrified troll is home to hundreds of nesting birds who forever punish him with a thick layer of guano, and Icelanders who mock him with the name “White Shirt.”

Of all the stories, historians consider Goðafoss a landmark in North Iceland culture, for its here that regional chiefs met with pagan lawmaker, Thorgeir Ljósvetningagoði to determine whether to continue their old ways or embrace Christ as their spiritual guide.

The saga tells us that as a gesture of Iceland’s newly adopted religion, Thorgeir Ljósvetningagoði stood at the brink of the falls to cast a collection of Norse idols into the abyss, marking an end to paganism. Thus, the waterfall was christened Goðafoss, the “Waterfall of the Gods.”

It was the beginning of conversion, and Iceland eventually capitulated to convention. Nevertheless, the notion of magic and sorcery continued to flourish in Iceland, well into the 17th century. A museum located in Hólmavík is devoted to the subject.

It tells the story of 25 or so victims who were executed on charges of witchcraft between 1625 and 1685.

ranging from the sublime…

Superstitions began to fade during the last decades of the 17th century, and the Reformation came as a shock to Icelanders. But consider a 2007 study by the University of Iceland that found an estimated 62% of the nation still believes in the existence of elves, and 40% of the population is irreligious. 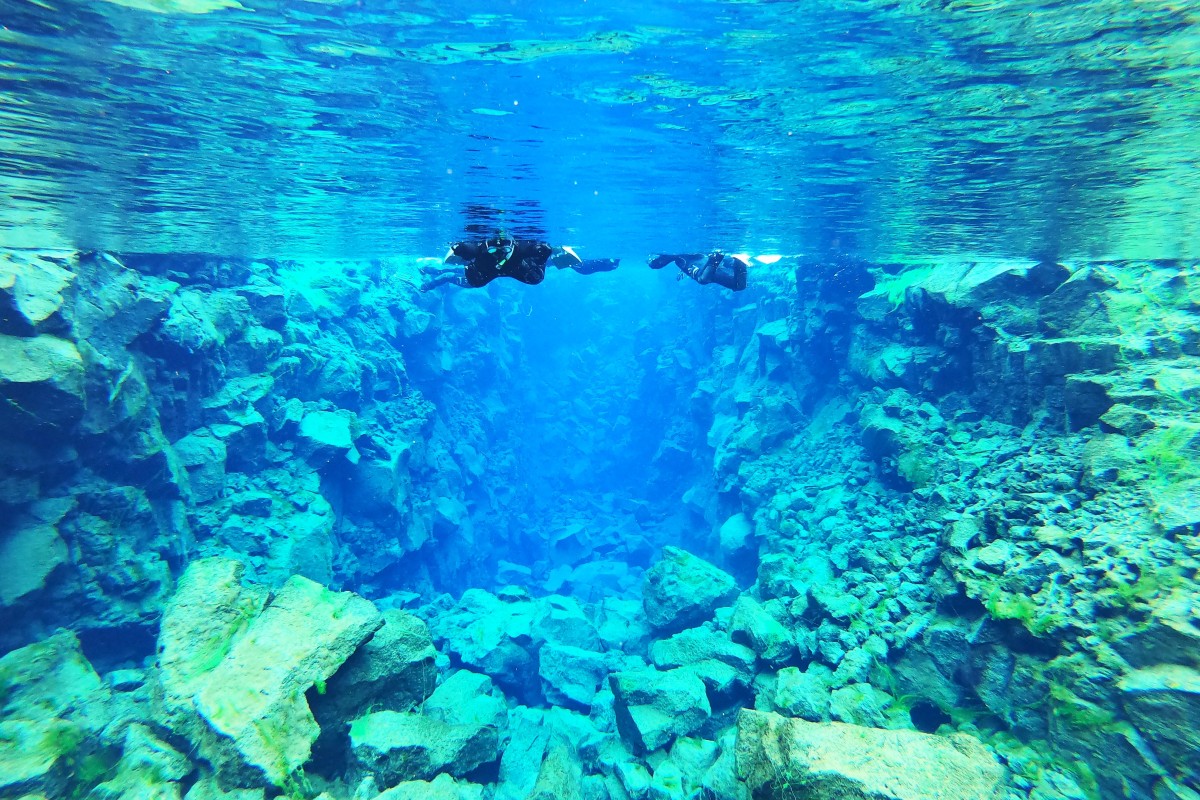 There is one place on earth–Silfra–where it’s possible to “touch” two different continents underwater and it’s located within the Golden Circle of Iceland. Leah and I were up for the challenge, but it required some preparation.

First, we traveled southeast of Reykjavik to Thingvellir National Park, the birthplace of parliamentary government (Althing, 930 AD), and the zone where volcanic activity has played a heavy hand in shaping our planet.

Not to get too bogged down in earth science, but a rift occurred through the middle of Iceland where two tectonic plates are pulling away from each other 2.5 centimeters every year as a result of volcanic activity in the region since the beginning of time,

and much of it vents under Lake Thingvallavatn, Iceland’s largest lake.

Above sea-level, lava fields at Thingvellir have been torn apart by tectonic forces, leaving gorges and fissures to admire between two continents.

However, inside the rift valley created by daily earthquakes throughout time, there is one ravine, Silfra that allows snorkelers and divers to experience the tectonic plates underwater, but it requires a dry suit to tolerate the water temperature (2o C) and a certified outfitter to guide thru the underwater fissure.

Leah and I had booked an excursion through Arctic Adventures, who supplied all of our underwater gear and a guide to assist with dressing, and underwater photography.

We dressed in a parking lot by the roadside where various outfitters have set up shop.

Over the thermals and wool socks we supplied, we stepped into fully insulated jumpsuits to wear under incredibly bulky dry suits with fixed booties, snug rubber sleeve guards around our wrists, lashed with rubber bands, and a snug rubber seal around our neck with a rubber band choker. An industrial zipper across our deltoids sealed us in.

Then came a rubberized neoprene hood over our heads. Imagine forcing your head through your neck. After accessorizing our fashionable outfits with neoprene lobster gloves, we were ready for the apocalypse.

We were a group of twelve…

under the supervision of Chris (from Hungary) and Marcelo (from Sao Paulo). We split into 2 groups of 6,

and waited our turn to enter the water.

Immediately, the suit constricted around my lower body as I stepped deeper and deeper into frigid water…but I stayed dry! Without hesitation, I glided in and immersed my face. Only the small area around my facemask was exposed and the sensation around my lips felt like a cold scalding until they turned numb after 10 seconds.

We flopped onto our backs, and let the current carry us slowly through the gorge while watching the arctic terns doing aerial maneuvers overhead.

As we floated past Grynningar Shallows, I was awed by the clarity of the water, with visibility beyond 100 meters (300 ft).

We were in the water approximately 40 minutes. Once we reached the Silfra Lagoon, the stiff current required strong frog kicks for us to reach the exit point.

As promised by Marcelo, each of us emerged from the lake with “Angelina Jolie lips.”

Overall, the experience was sublime. However, my biggest complaint had to be cold hands. Most of the time, my hands stayed clasped behind my back, out of water, but the weak stitching around the seals of the gloves made them porous. Marcelo quipped that the gloves leaked because they were made in Sweden.

Lest we be judged for our adventurous antics, consider this unassuming mother of three from Germany, who stripped down to her swimsuit, and took the polar plunge, albeit for only 30 seconds.

I don’t think she’ll be doing that again, anytime soon, but for me, it could become an addiction.