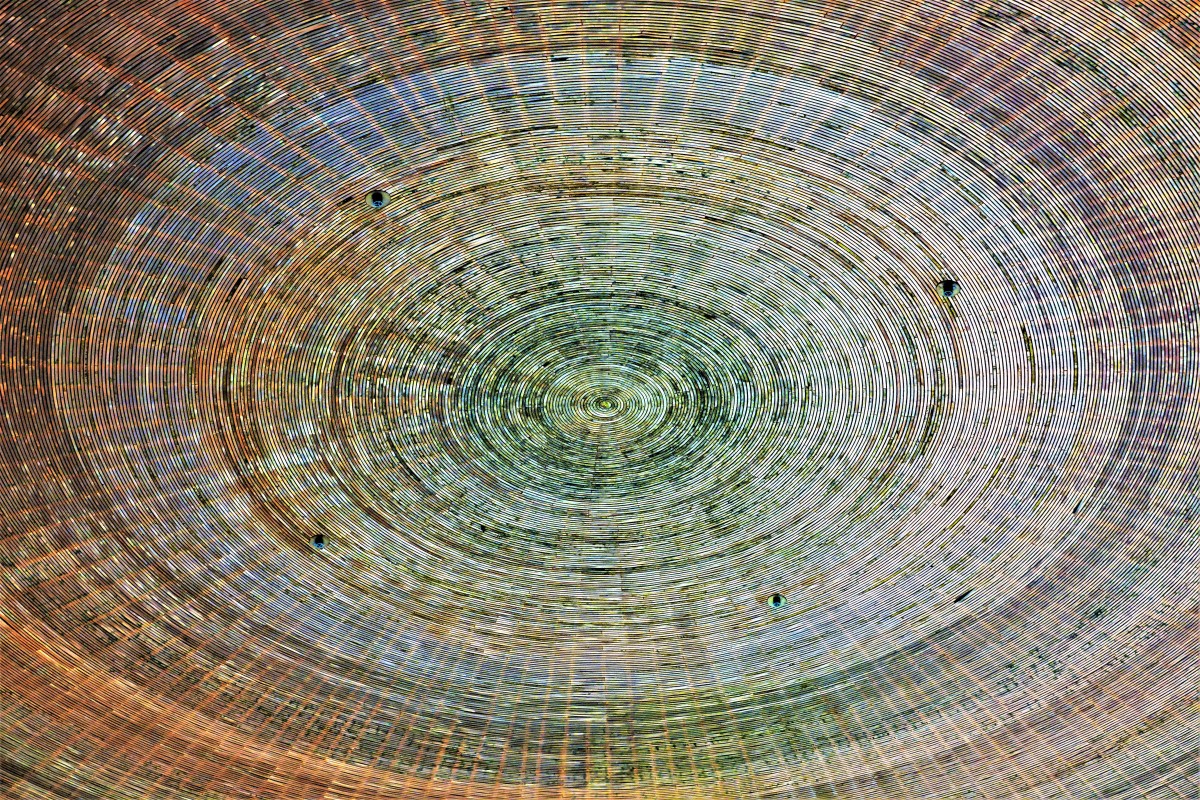 With our Norway cruise behind us, Leah and I had designs on extending our Northern European adventure. Unfortunately, our plan to visit St. Petersburg hit a fatal snag after we neglected to apply for Russian visas in a timely fashion.

Originally, our flight from Bergen to St. Peterburg required a transfer through Helsinki, so Helsinki became our default destination for the next four days. Although my dream of touring the Winter Palace and Hermitage was temporarily dashed, Helsinki seemed like a worthy safety net and exciting city to explore.

But something about Helsinki was off. Ordinarily, Helsinki during winter months would be blanketed in snow with the harbor frozen over… 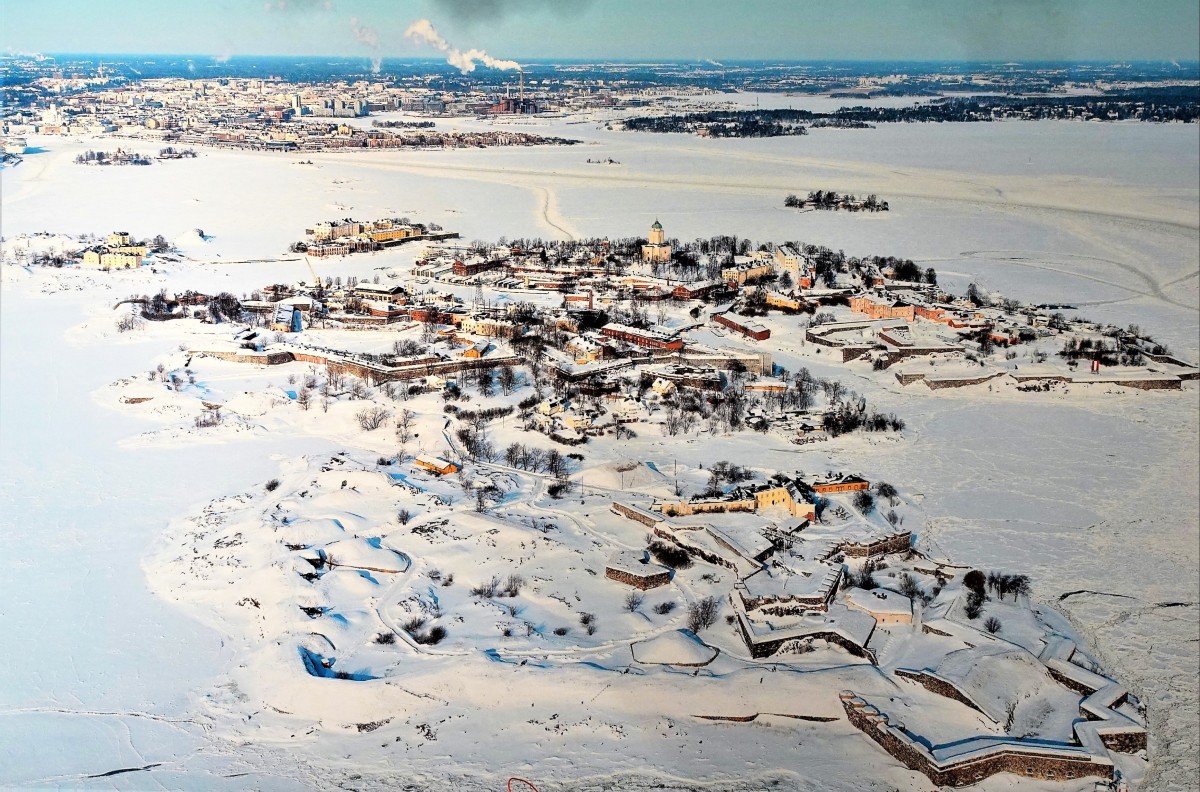 but during our visit, the landscape was fully thawed. 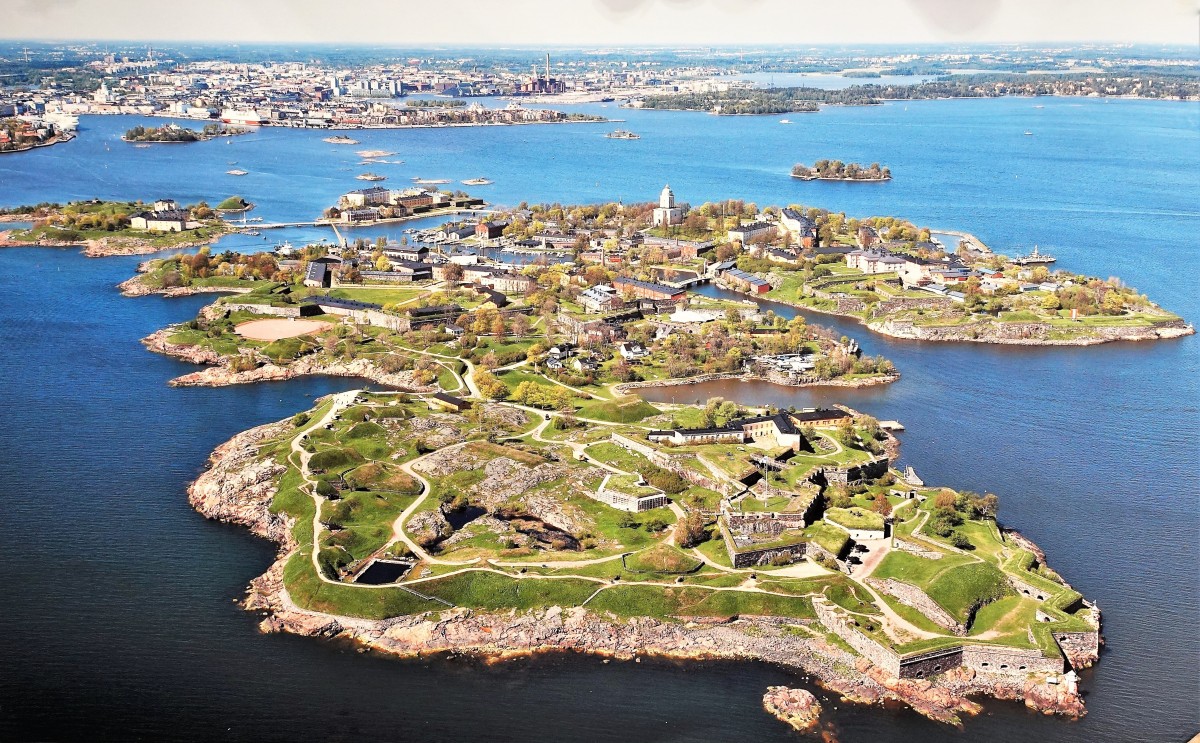 In fact, residents hadn’t seen a trace of snow since winter’s arrival, although they were experiencing one of the wettest and gloomiest seasons on record.

And that’s exactly how it felt to us as we wandered through Helsinki’s city streets, taking in the cultural setting and the vibe.

On our first day of touring, the rain and wind was relentless, but we were undeterred. In the end, we punished our umbrellas, and rendered them useless. But they saved us from a soaking and protected my camera as we found our way to Helsinki’s 50-year old landmark, the Church of the Rock– and capped by an oval dome of skylights and copper.

In 1961, Timo and Tuomo Suomalainen–Finnish brothers and architects–conceptualized a church excavated from solid rock amidst Helsinki’s Töölö district, and were awarded the commission by a jury of their peers.

Ultimately, budget constraints and construction delays prevented the project from getting underway until February 1968, but the brothers saw their vision consecrated in September 1969.

The church became an instant mecca for concerts, 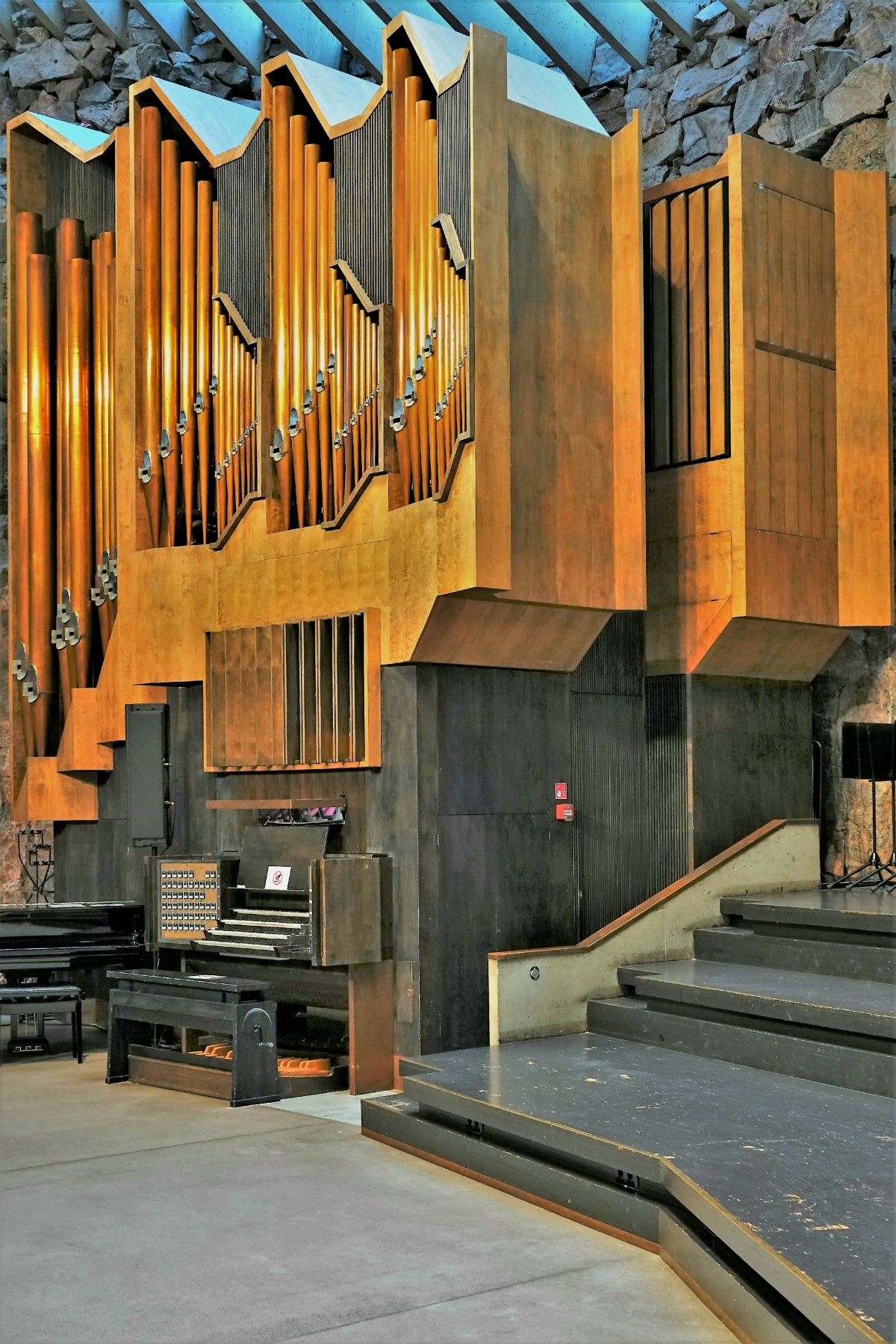 after sound engineers determined that exposing the rough-hewn rock walls could deliver an acoustic nirvana.

More than half a million visitors a year flock to Church of the Rock for worship, wedding celebrations, and meditation. 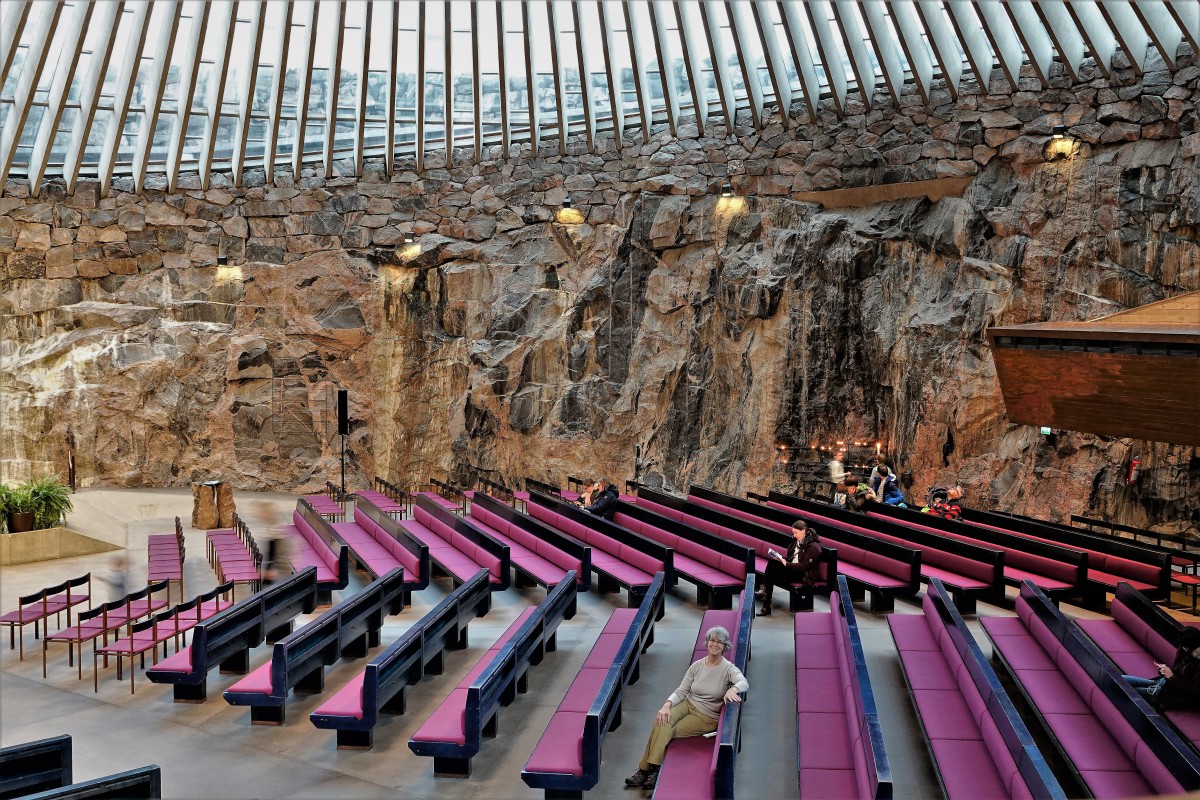 But I came to dry off and stare at the ceiling. 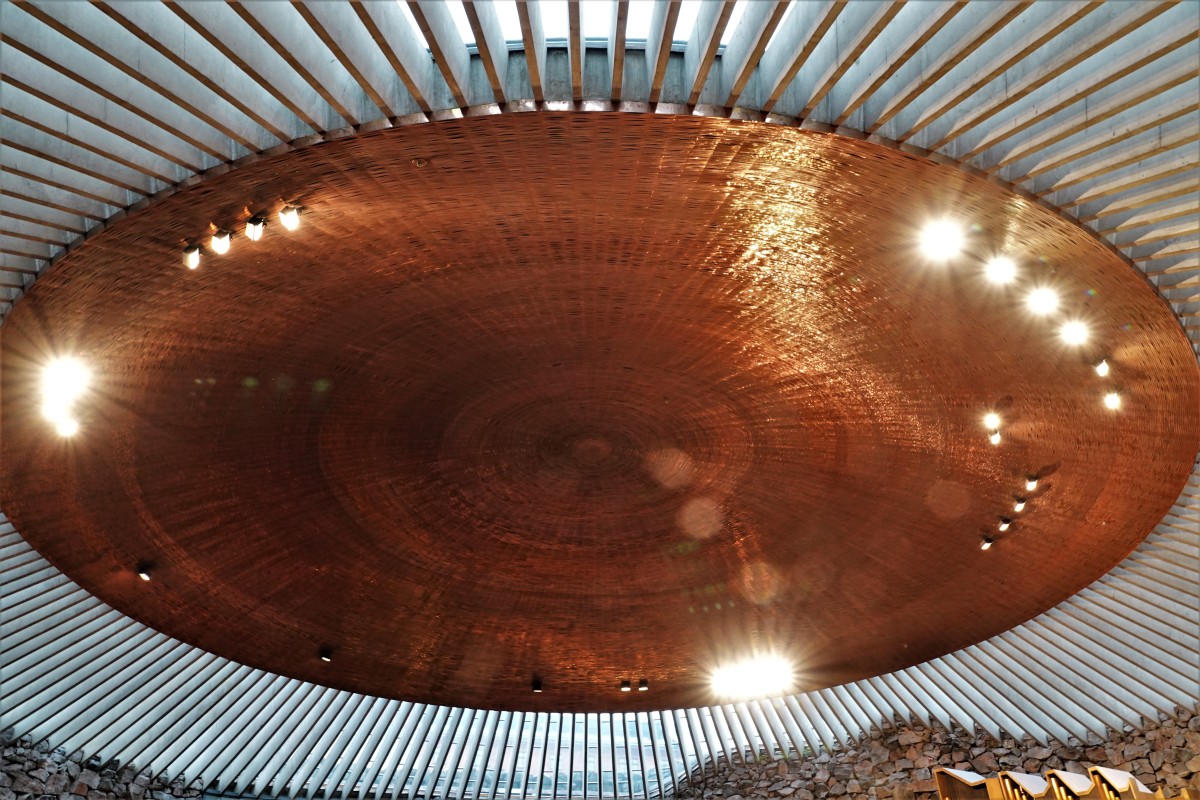