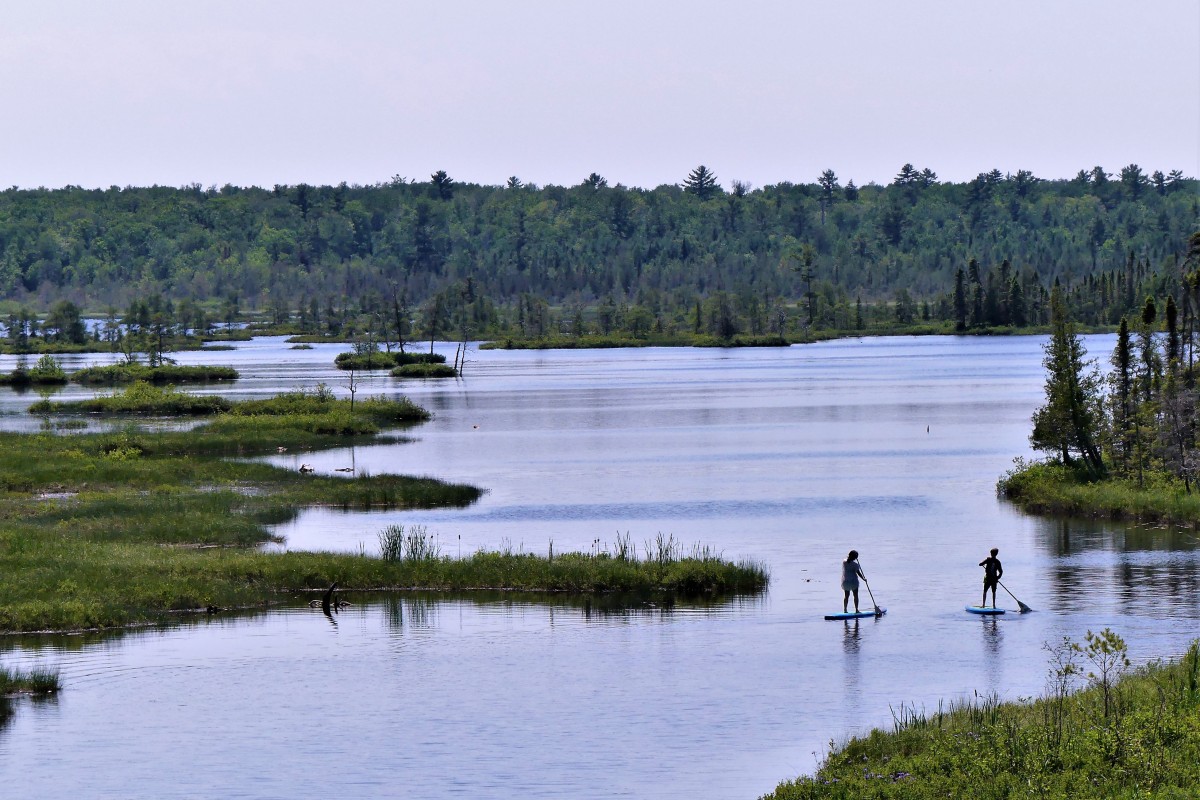 While staying in Bayfield, Leah and I learned of Ashland’s Mural Walk. While only a half-hour from our camp site, we were so preoccupied with three full days of hiking, biking, and kayaking around the Apostle Islands, that time became a factor.

When asking around about the murals’ merits, someone local described the trip as “interesting”, so we decided to make an informed opinion for ourselves. Since Ashland was on our way from Bayfield to Munising, we boarded the Airstream, checked out of Apostle Island Area Campground, and followed GPS to Ashland Mural Walk. An actual POI pinged when I asked Jennifer (our GPS coach) for the route.

We had completed a previous mural walk in Palatka, Florida, also a county seat, and found it odd that their murals were in better shape than the town. We wondered if this was also the case in Ashland.

Ashland’s history dates to 1500, when the Ojibwe stayed on Chequamegon Point. A century later, they were followed by French fur trappers, European traders, and Jesuit missionaries. By mid-1800’s, Ashland’s first settlement was established, and the town prospered as a major quarry and port with rail service to Chicago.

Thanks to mural artists Kelly Meredith and Susan Prentice Martinsen, Ashland’s murals are a pleasant recapitulation of their proud history and their community spirit. 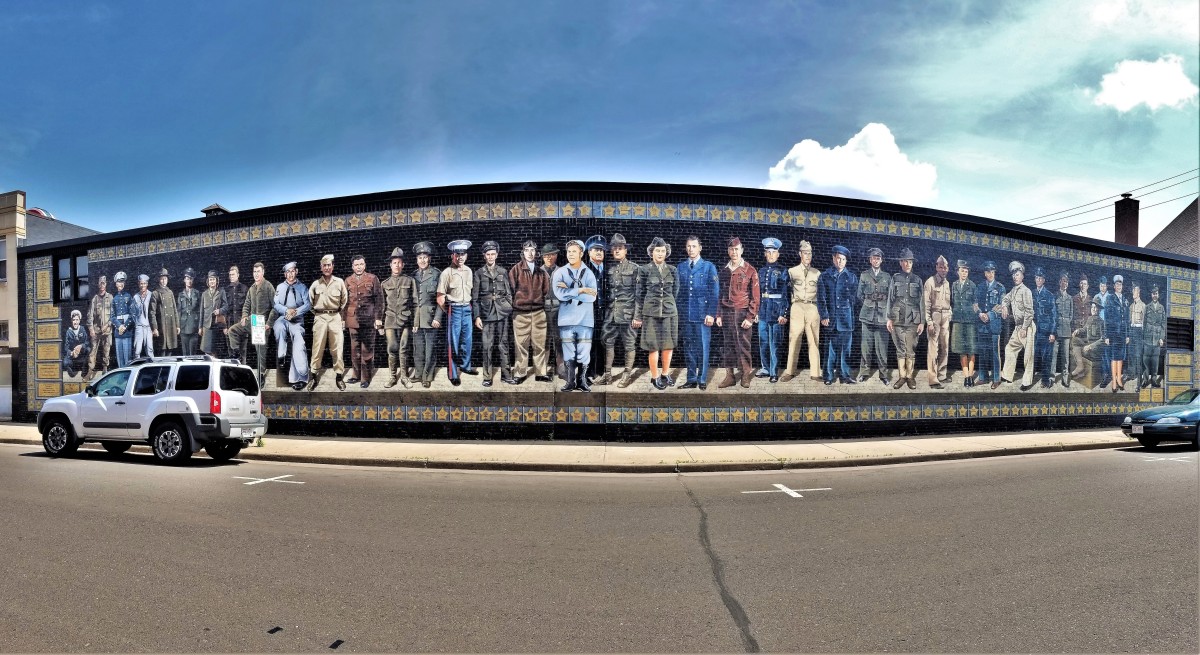 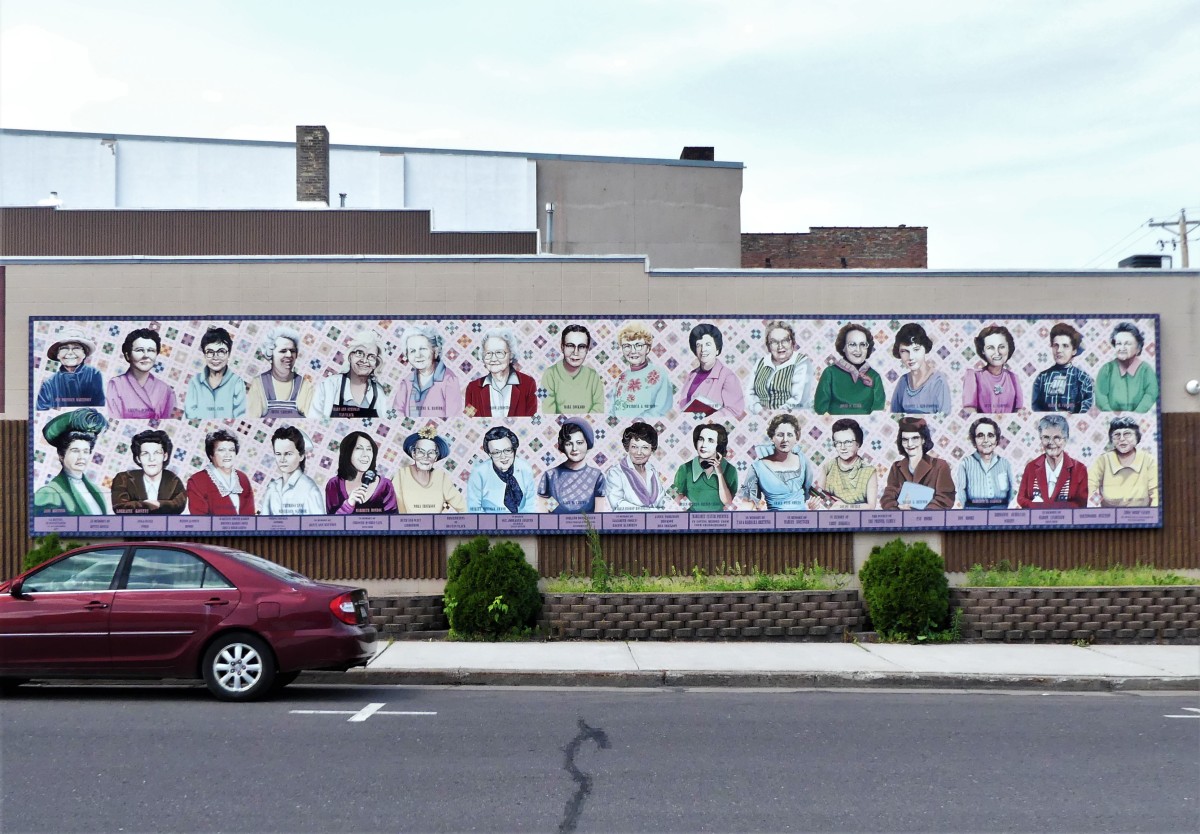 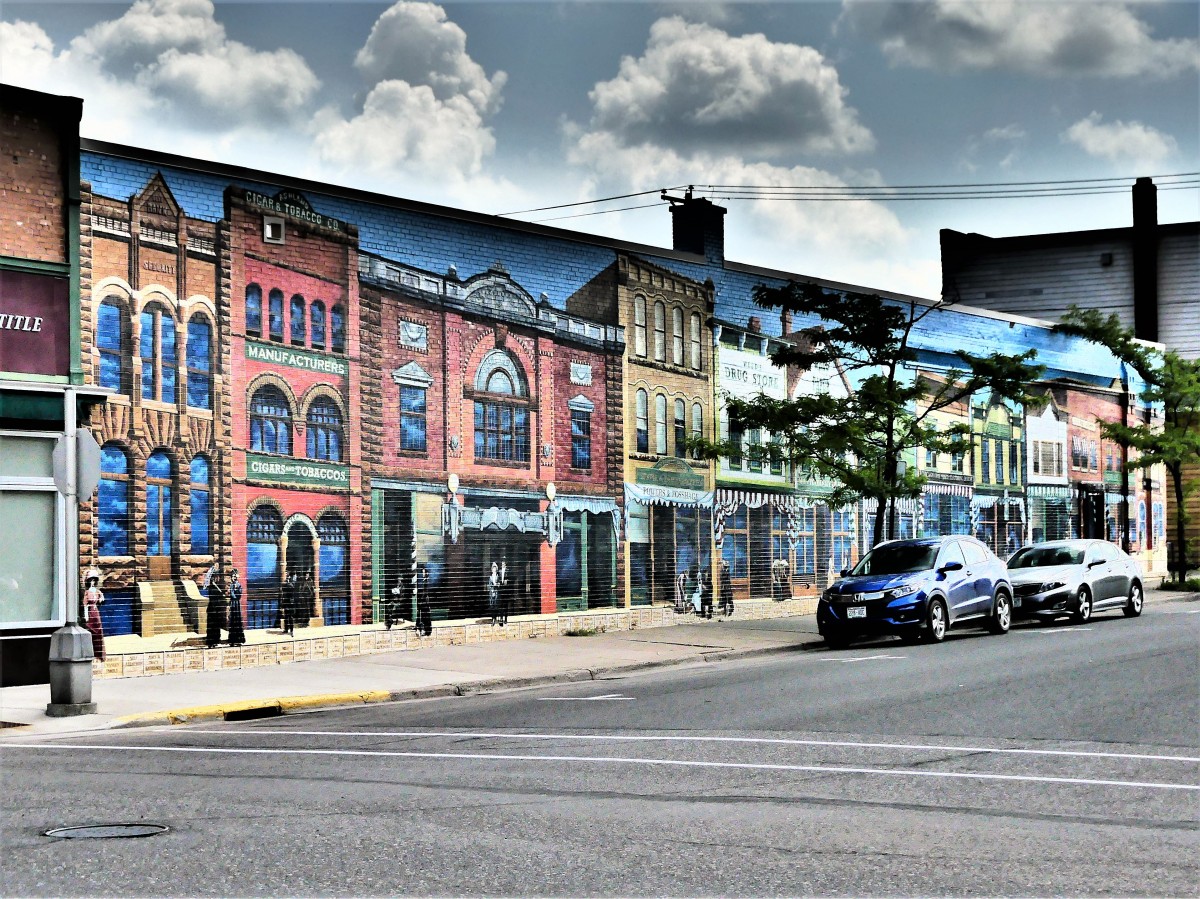 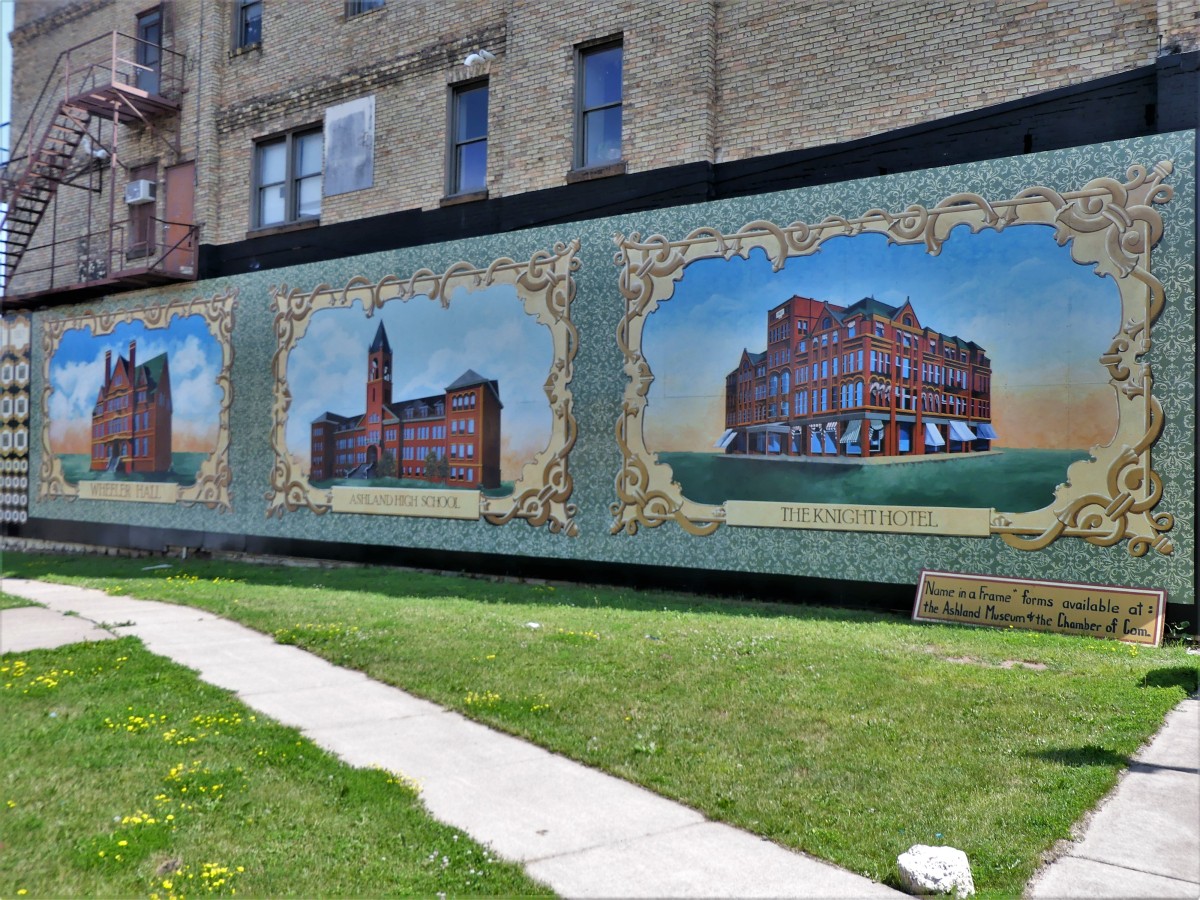 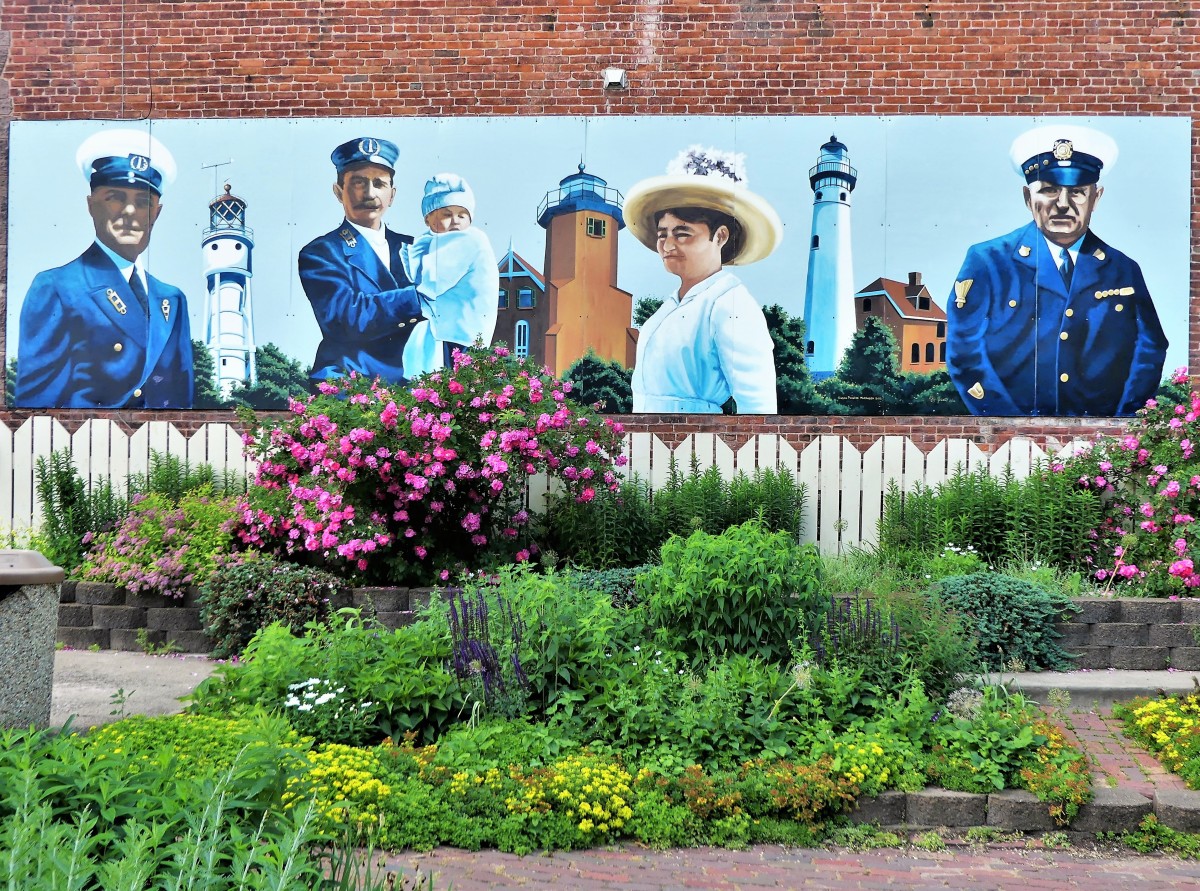 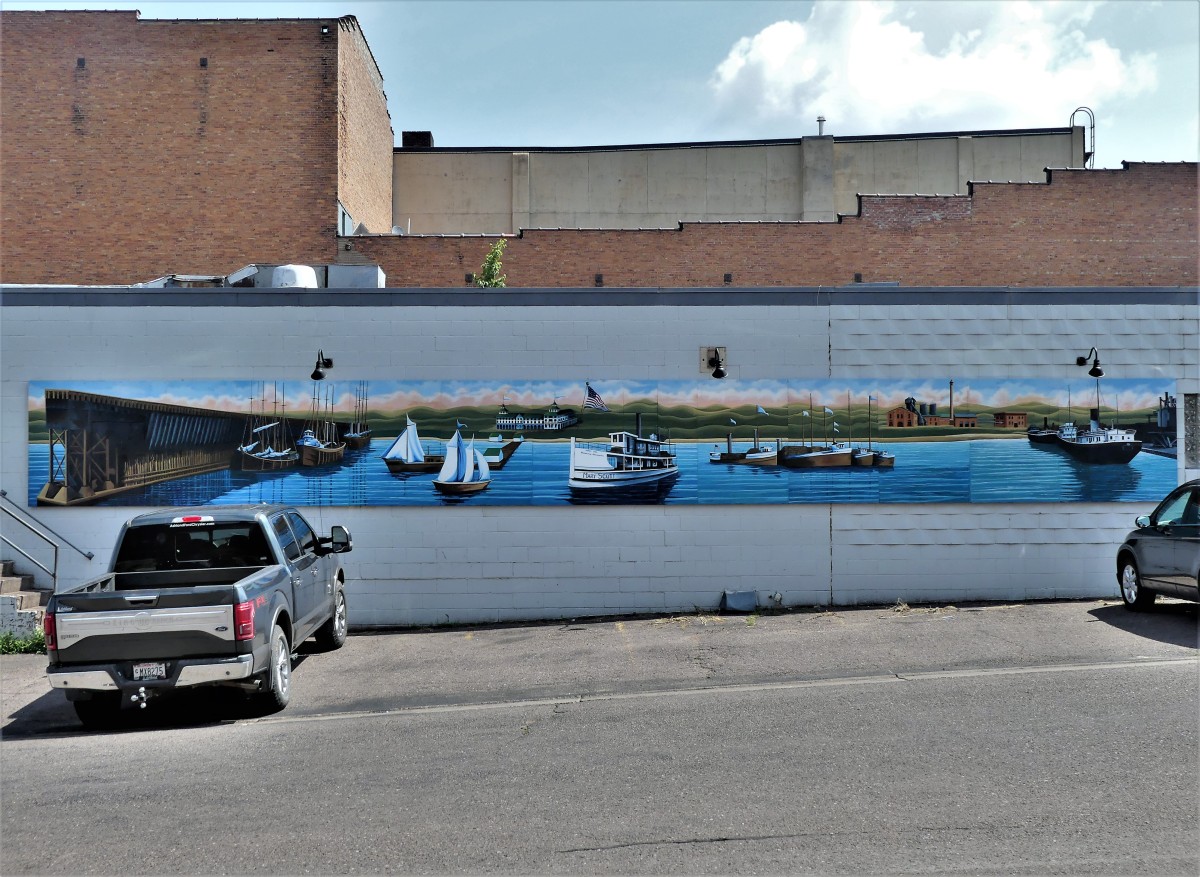 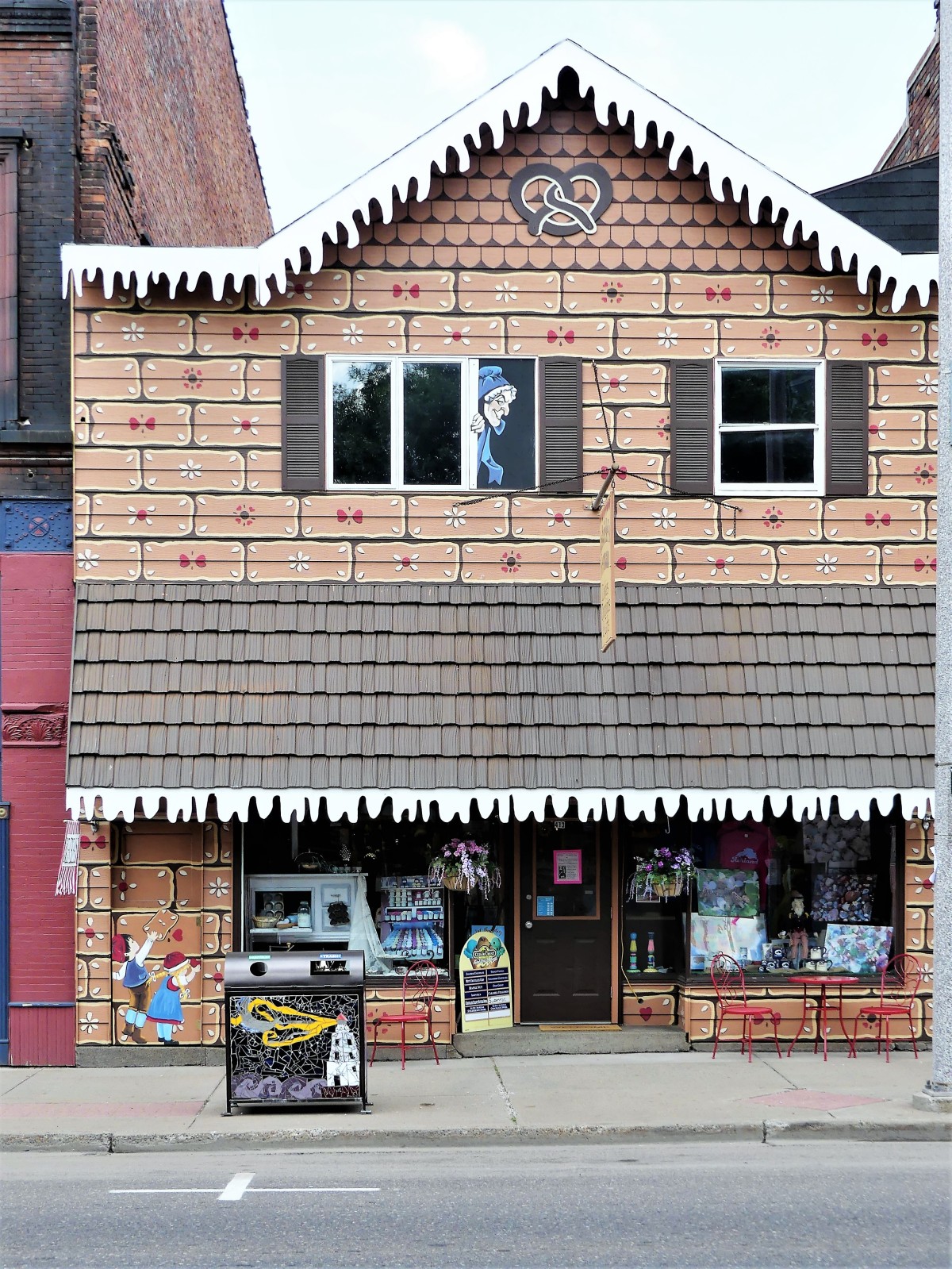 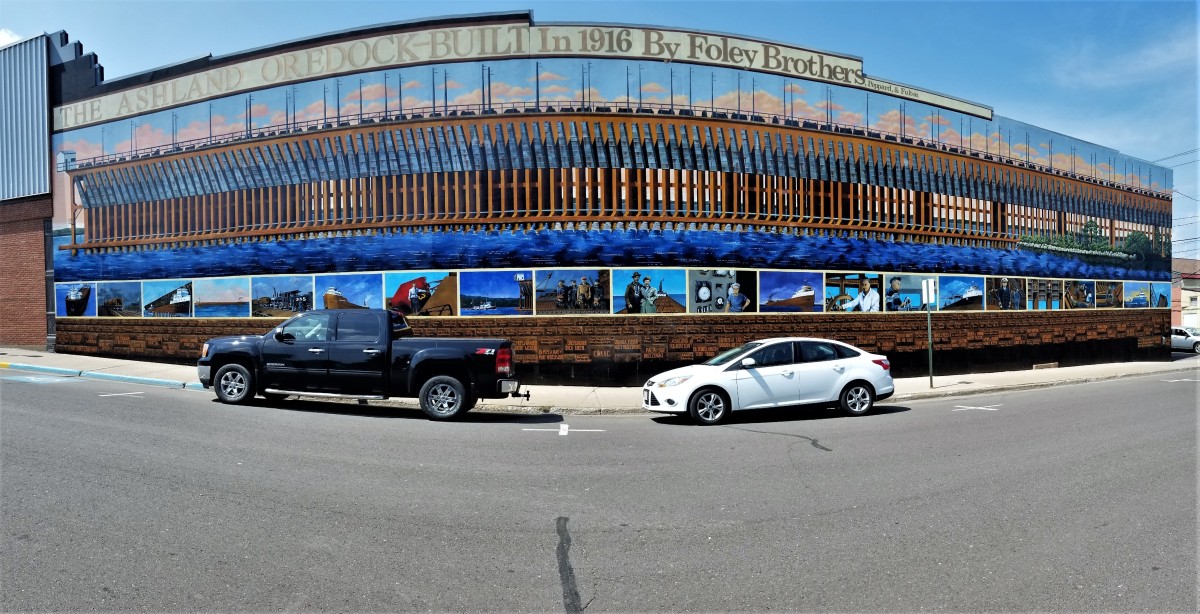 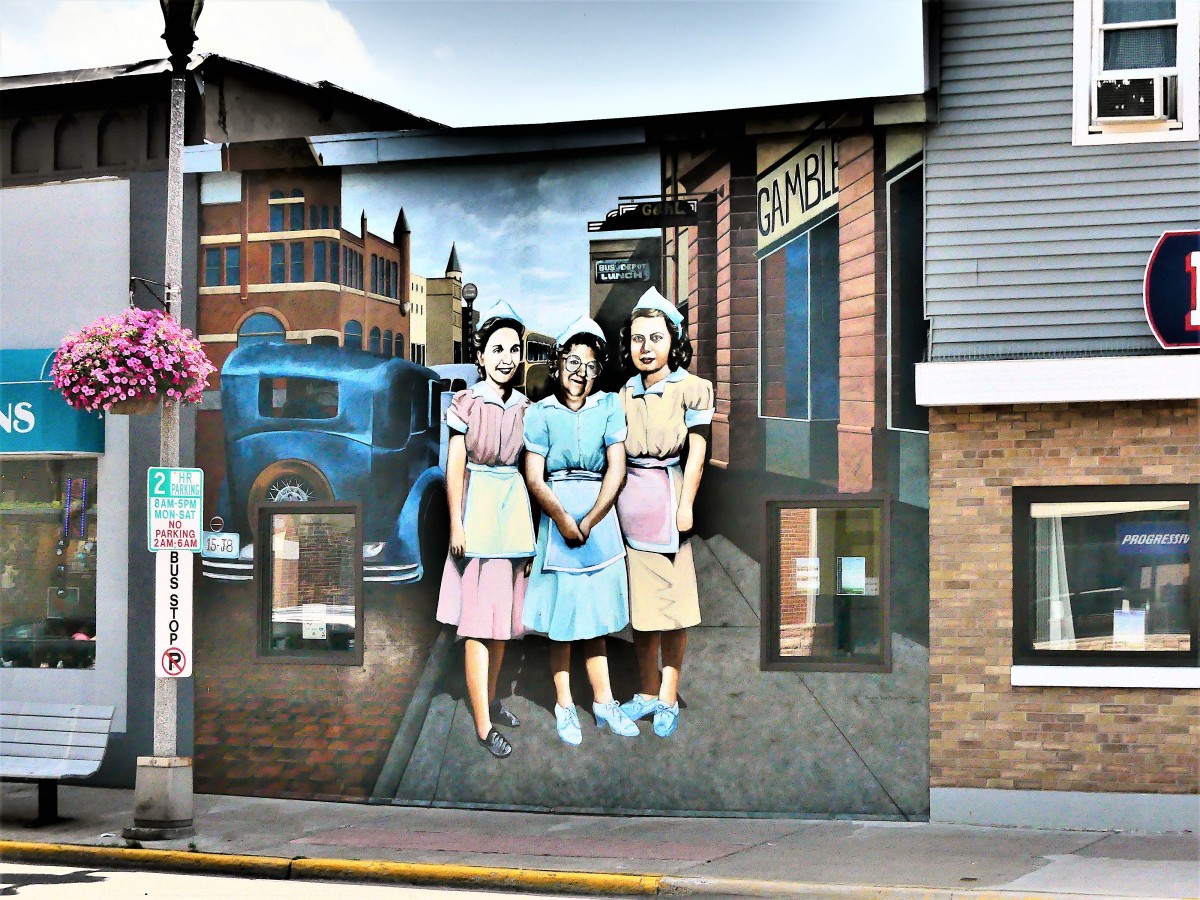 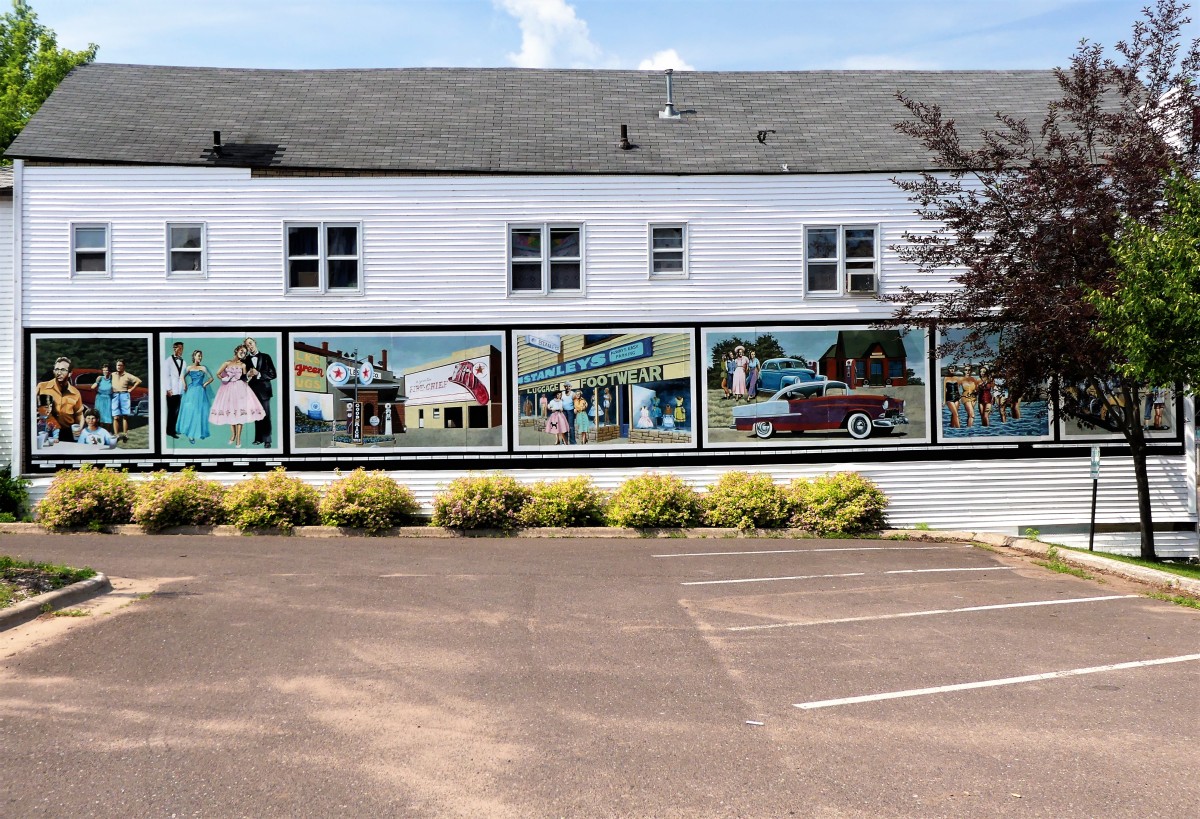 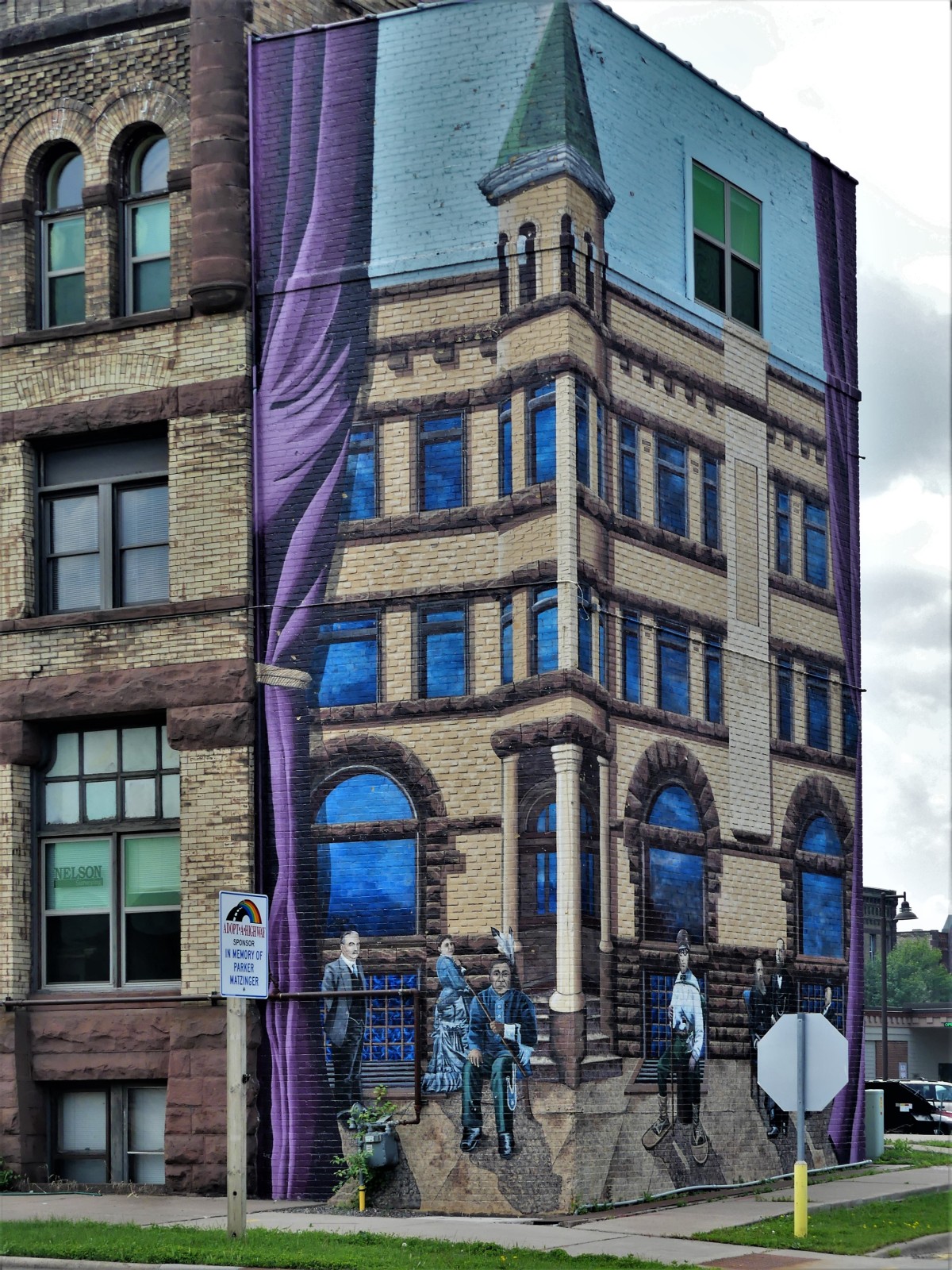 The murals have been beautifying downtown for twenty years. But Ashland wasn’t content to rest on its murals. Since 2017, decorative mosaic containers have been popping up on Main Street, turning trash to treasure.

There are 18 murals located around an 8-block radius of Main Street’s business district.

Leah and I gave ourselves an hour to see as many as we could (we found 12), but a 4-hour drive to Musining still loomed large, so six were left undiscovered.

For additional information on mural titles, descriptions, and locations, or to see what we missed, a Mural Walk link is provided. 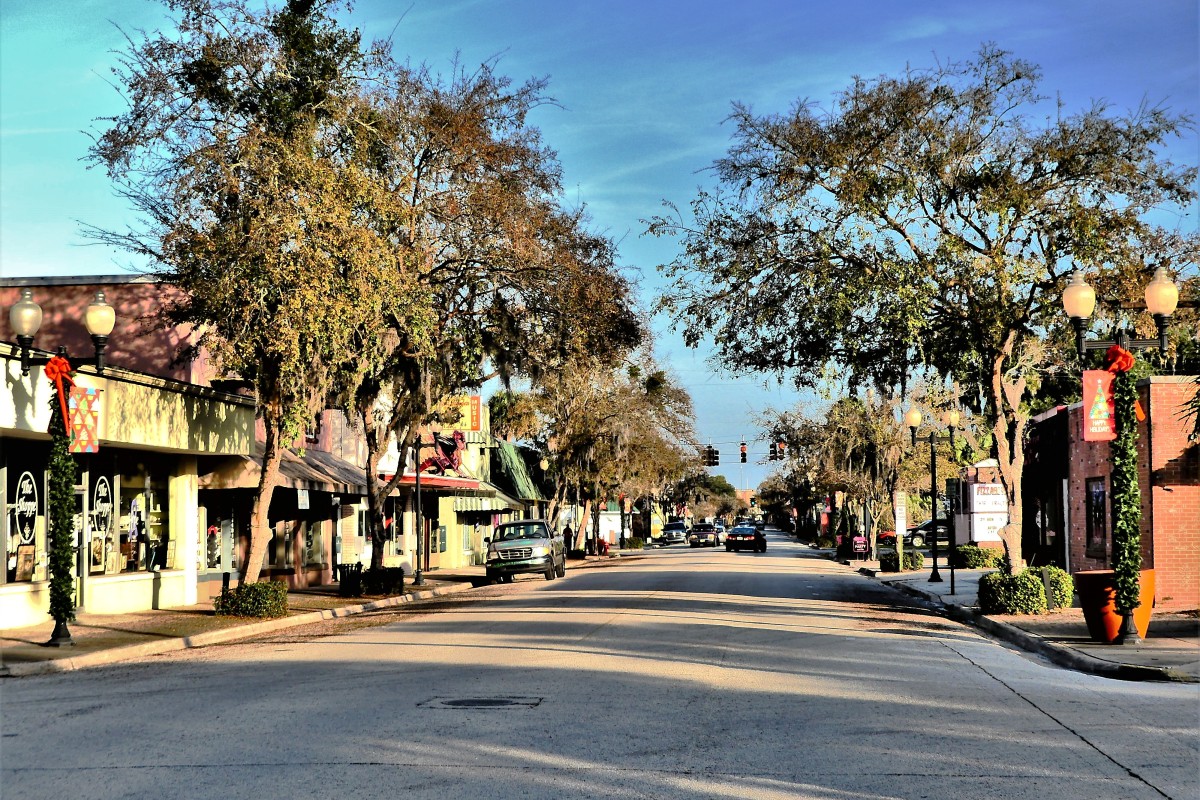 On the surface, Palatka, FL appears to be an antiquated town that time has left behind. As the county seat of Putnam County, there is legal commerce aplenty, 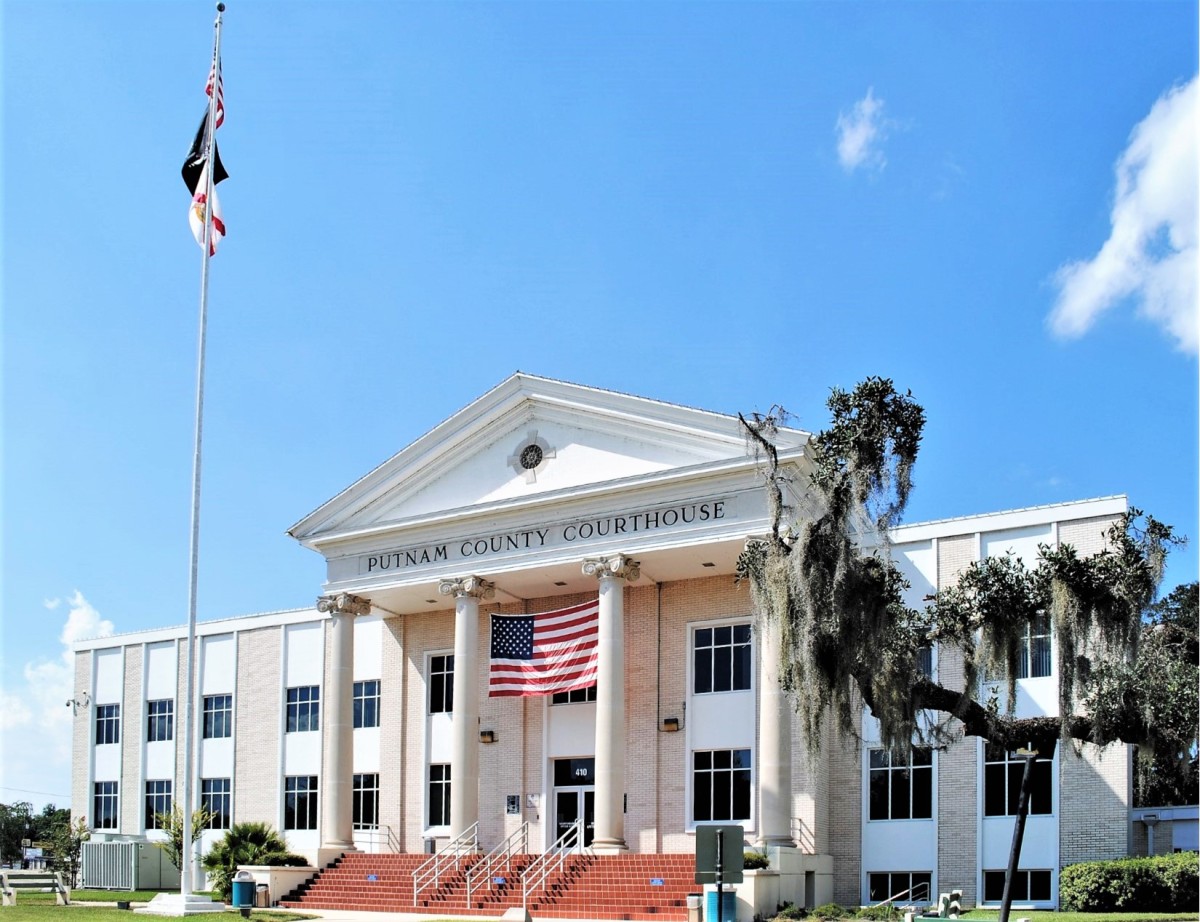 but Main Street bears the battle scars of a once-vibrant retail scene. 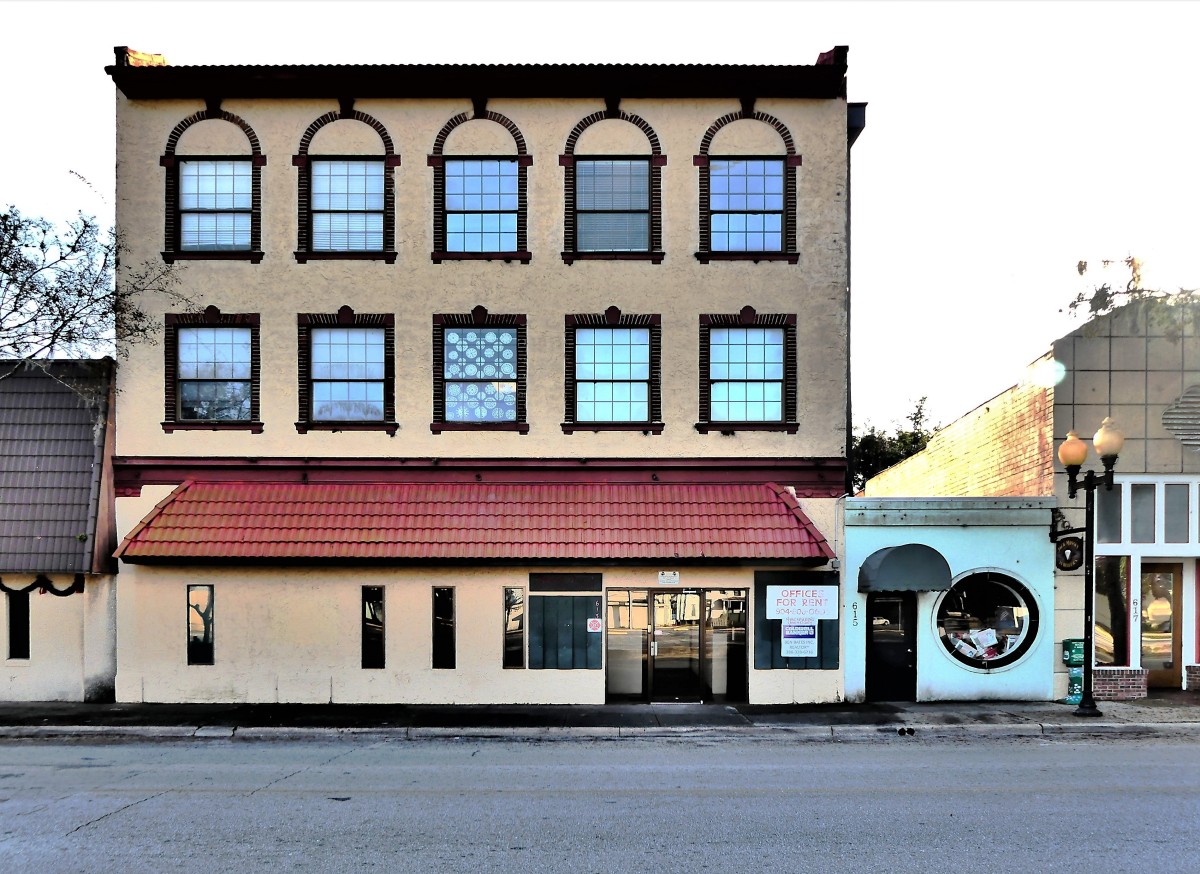 Far too many vacant store and empty sidewalks along St. Johns Avenue suggest that downtown Palatka’s panache has been replaced by big-box retailers like Wal-Mart (only three miles away)–jokingly confirmed by a hand-painted directional crossroads sign… 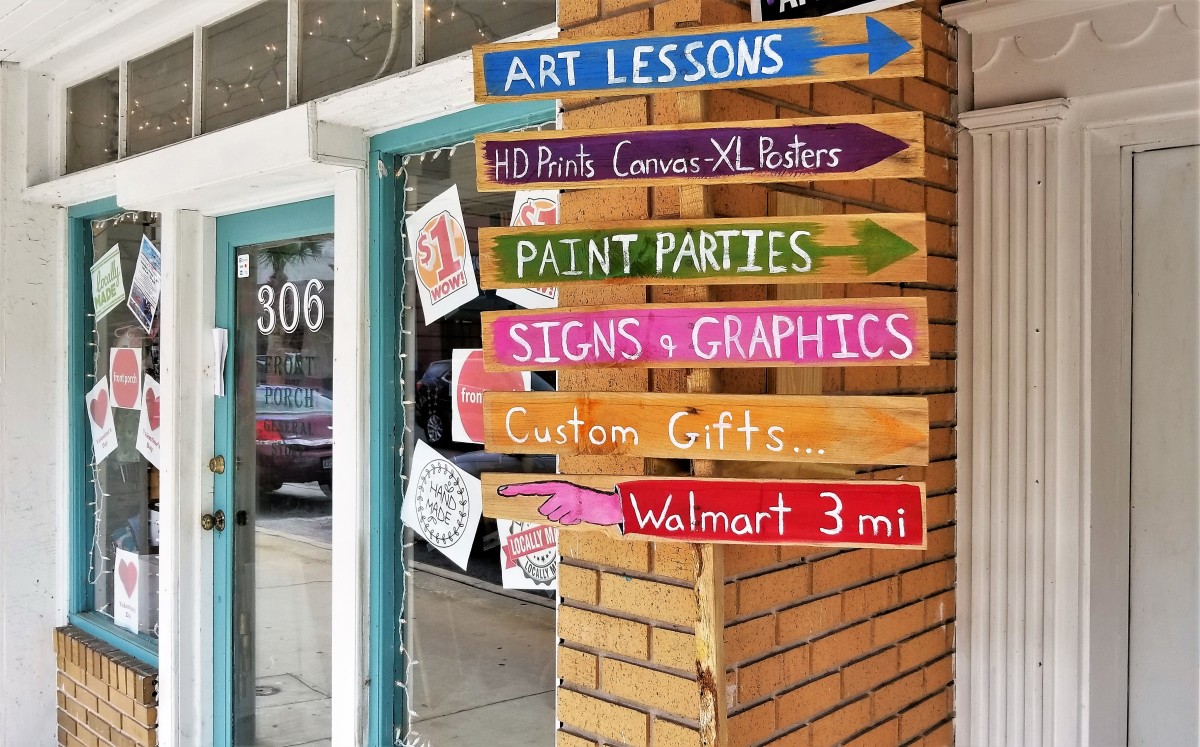 beside an empty storefront.

In fact, it would seem that much of Palatka is FOR RENT… 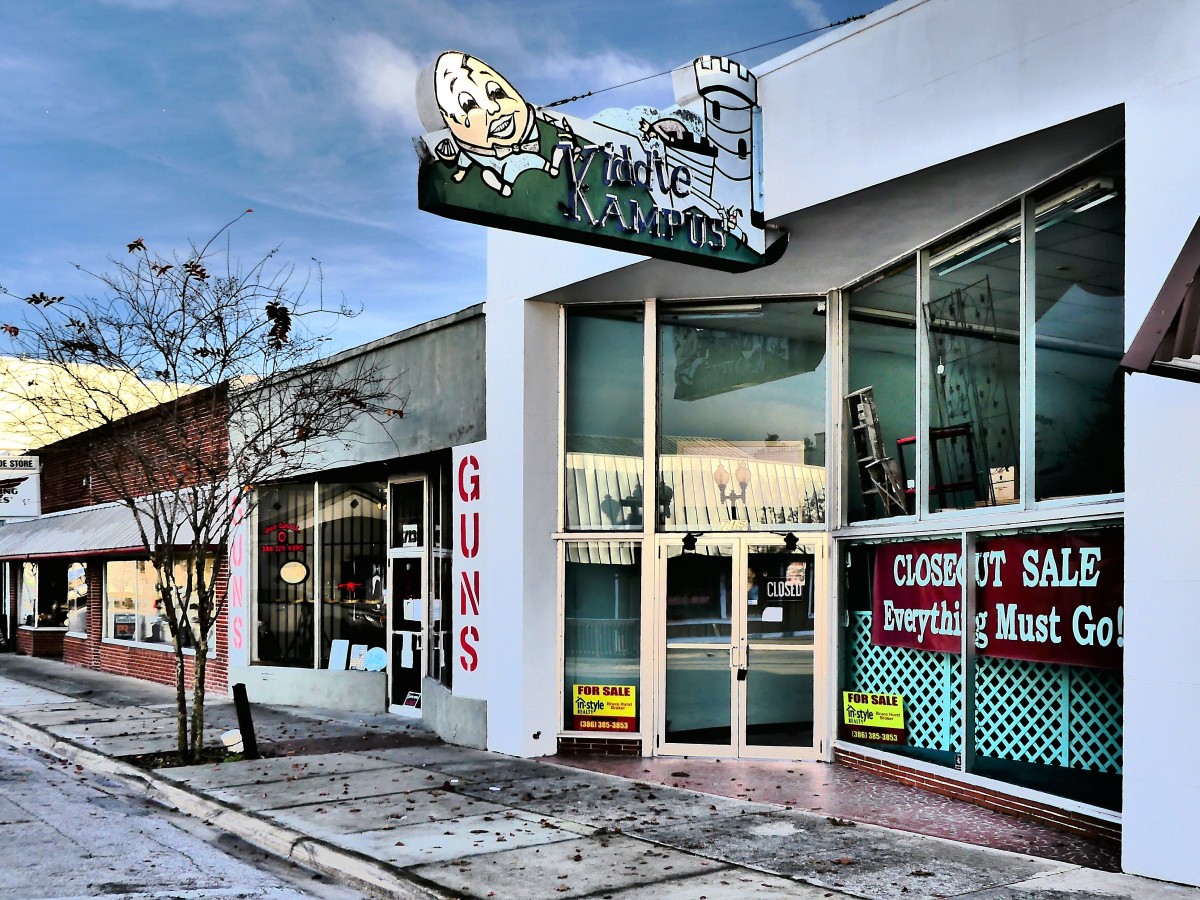 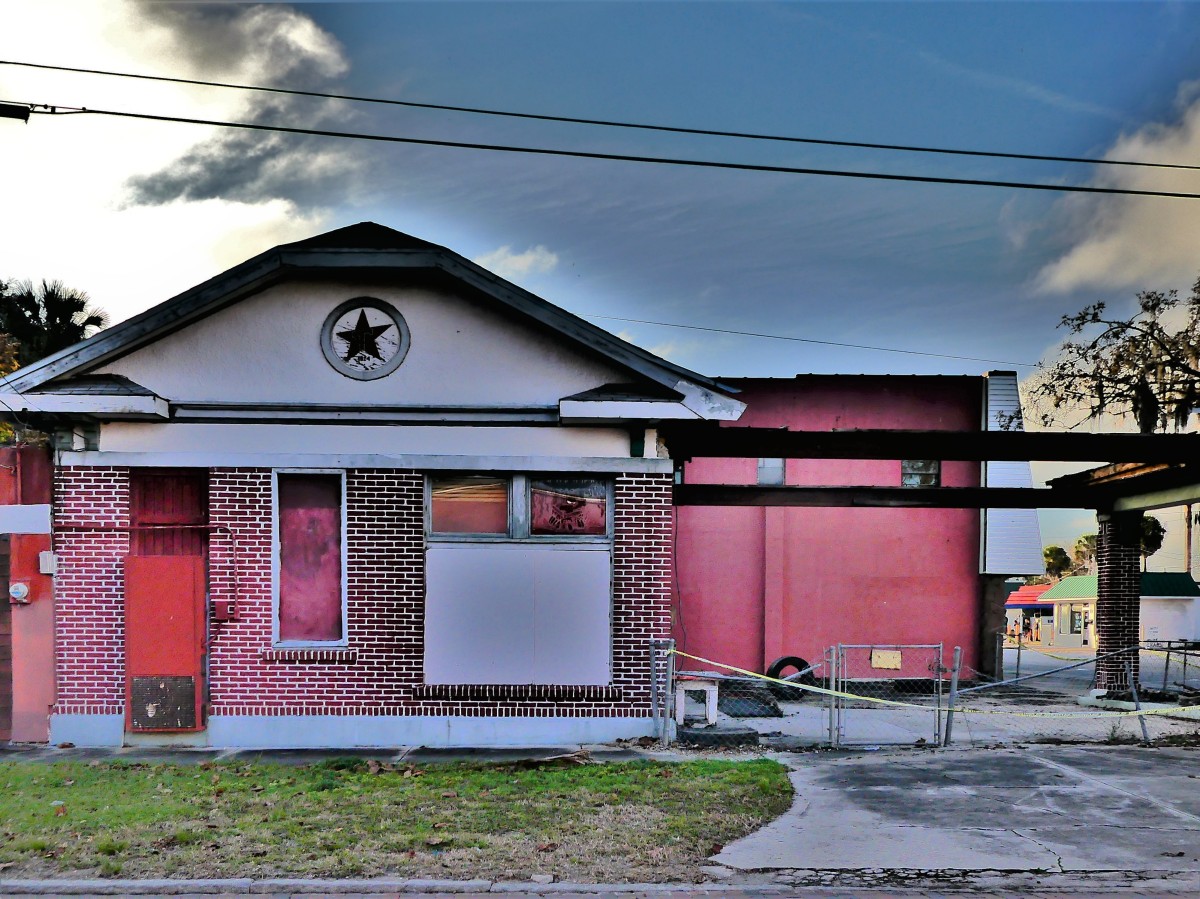 Palatka sits on the west bank of St. Johns River offering strategic access into Central Florida, which is what made Palatka a once-thriving pre-Civil War trading post after land-hungry American settlers eliminated the Seminoles, driving them west of the Mississippi. 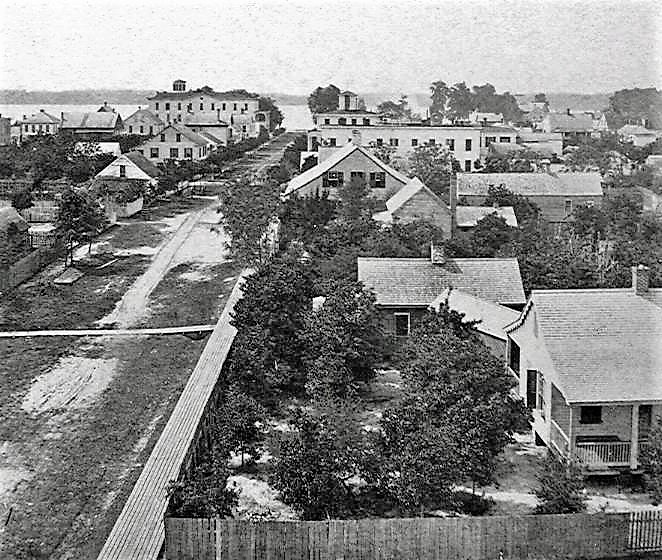 Equally important to Palatka’s economy at the time was its mild sub-tropical winters–extending farmers’ growing season and making the area a popular tourist destination for the hoi polloi, whose wealthier counterparts enjoyed a luxury haven in nearby, coastal St. Augustine (read The Poshest Campus in America, and Otto’s Collections).

Unfortunately, a historic fire in 1884 and deep-freeze in 1894 sealed Palatka’s fate as a favored destination, as most tourists migrated South. The city rebuilt, and eventually re-emerged as a manufacturing hub, with Georgia Pacific currently holding title to the largest private sector employer.

But what of downtown today for its nearly 11,000 residents, and how can they possibly compete with St. Augustine to the North, Orlando to the West, and Daytona Beach to the South?

The city, when considering its redevelopment needed a gimmick–something to breath new life into it.

It needed a serious makeover, or maybe some divine intervention. 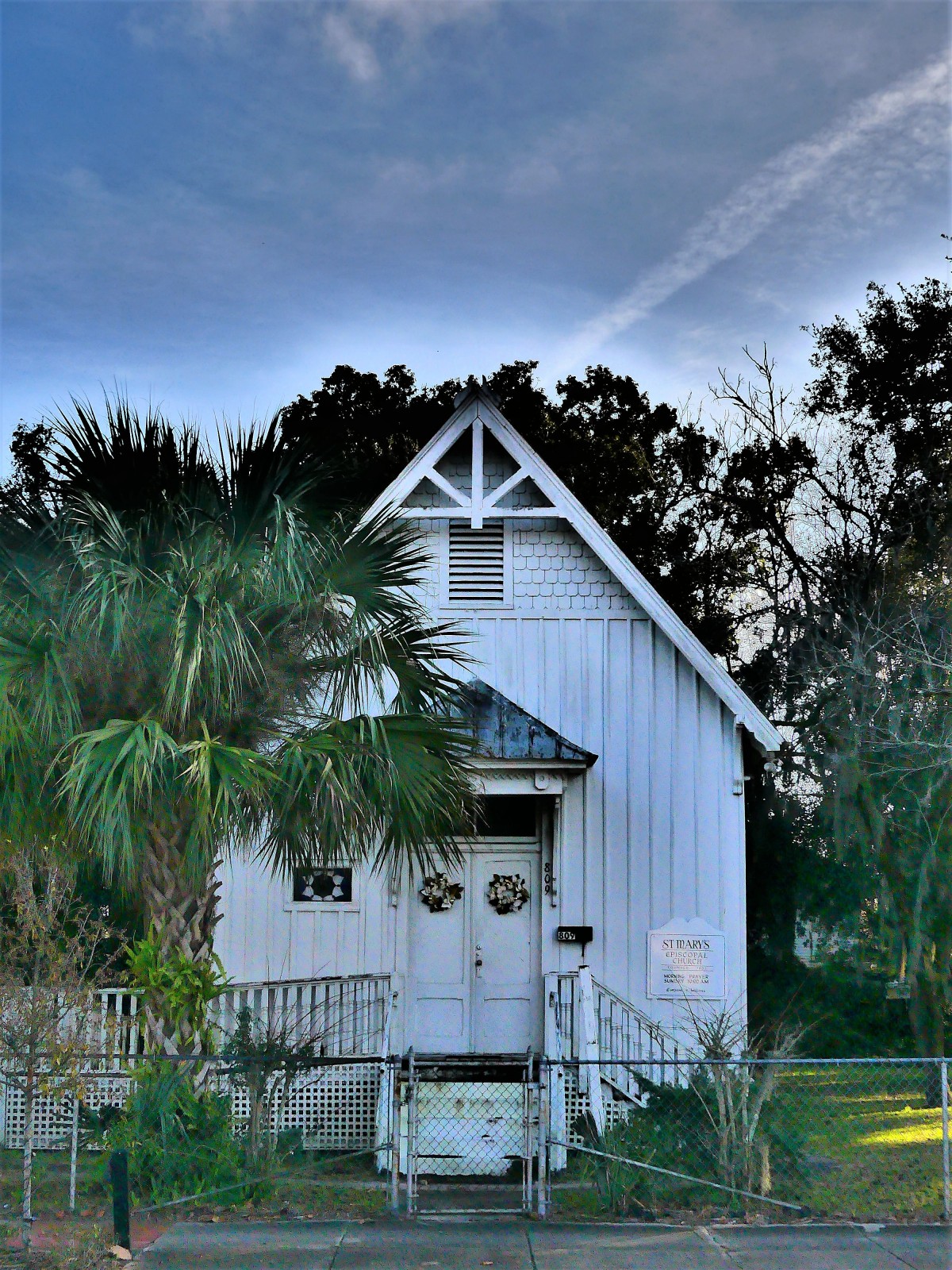 Driving traffic back to the beat of the city was important. The Bingo Palace added some well-deserved blue-collar cache and shabby chic to the area, 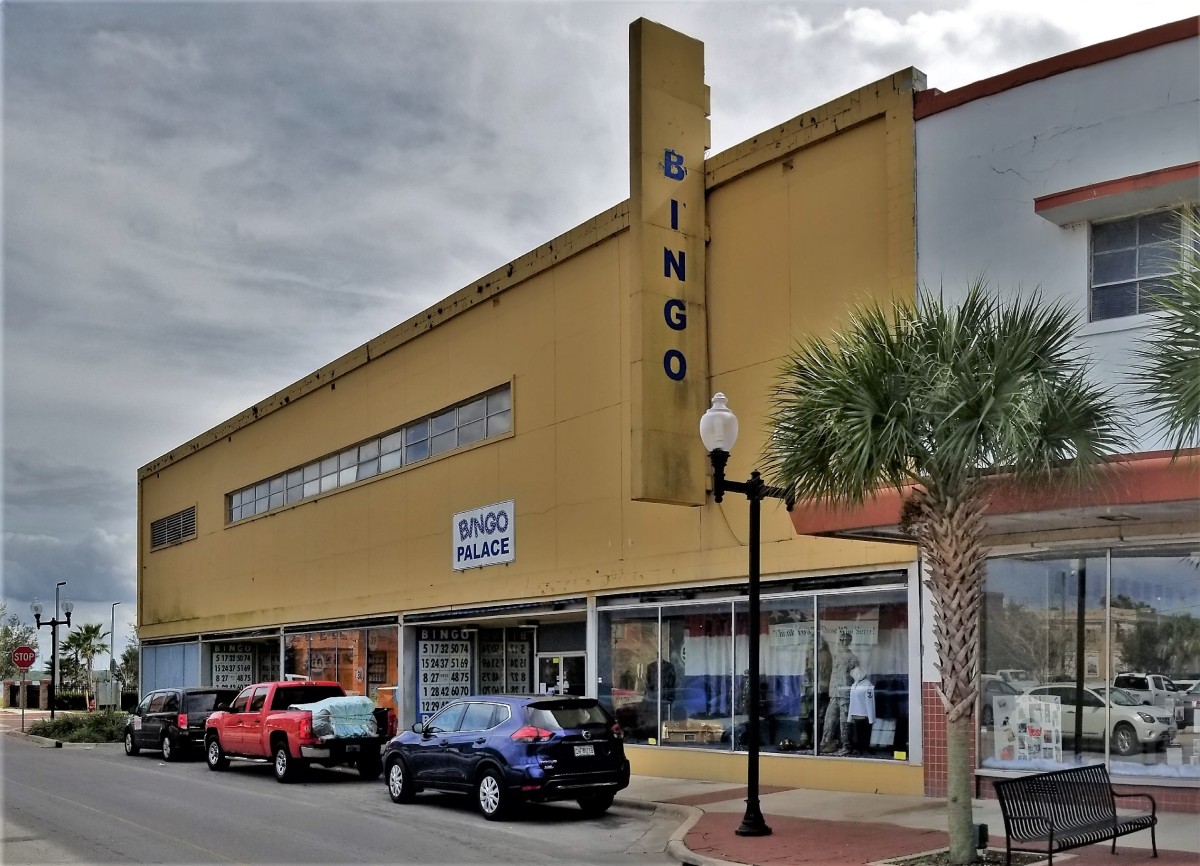 and preserving Angels Diner for future fans of Guy Fieri has also become a go-to venue.

One look around the interior of Angel Diner, and it defies the gravity of its standing as Florida’s oldest diner. 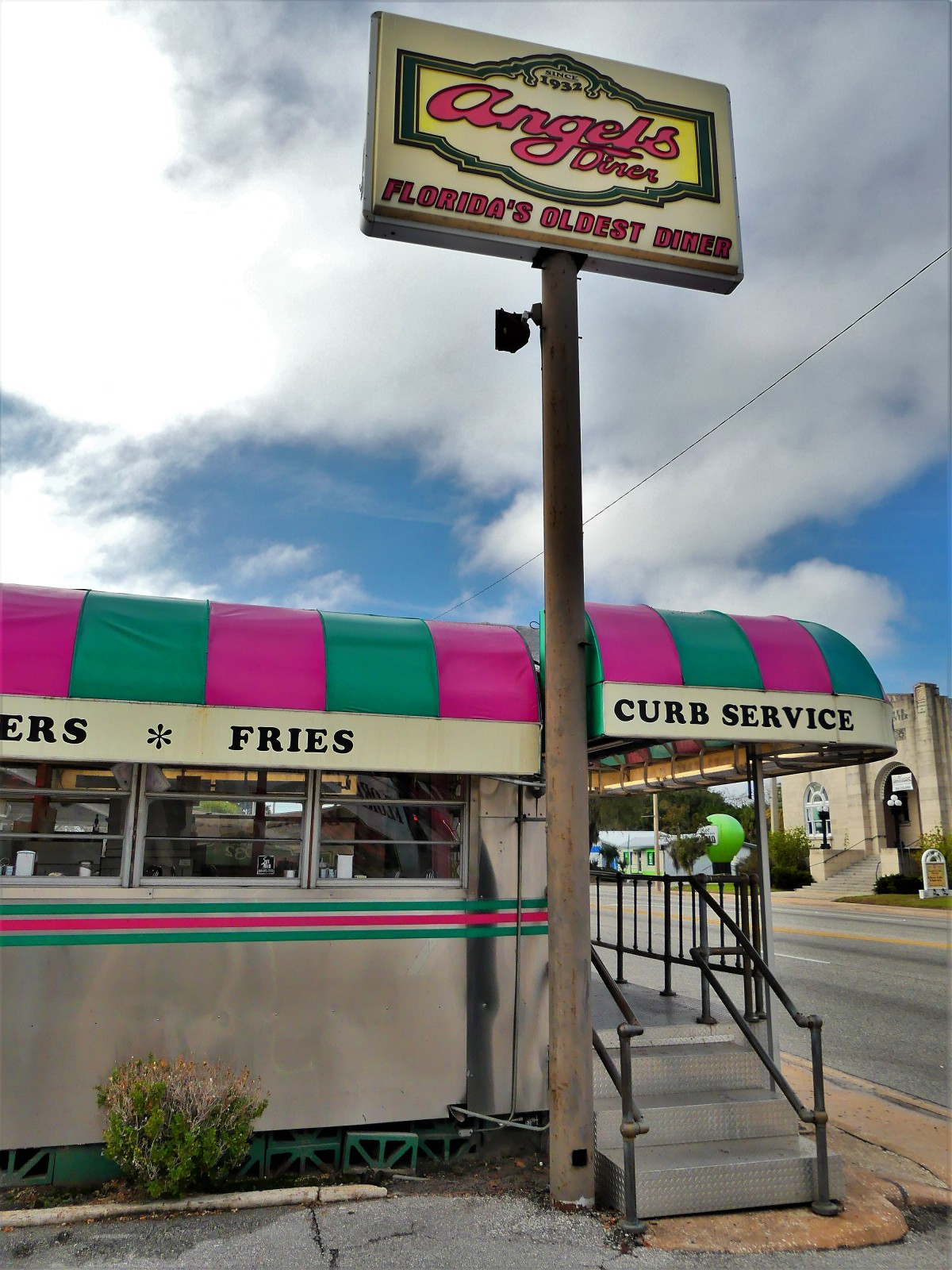 By any law of nature, it shouldn’t be standing, but this tin-skin dive is a testament to the wire and glue that seemingly holds its walls from caving. Stepping through its Hobbit-like entrance is like being transported back to a time when shiny greasy spoons offered up Happy Day burgers and shakes, while we listened to the jukebox soundtrack of our Growing Pains. 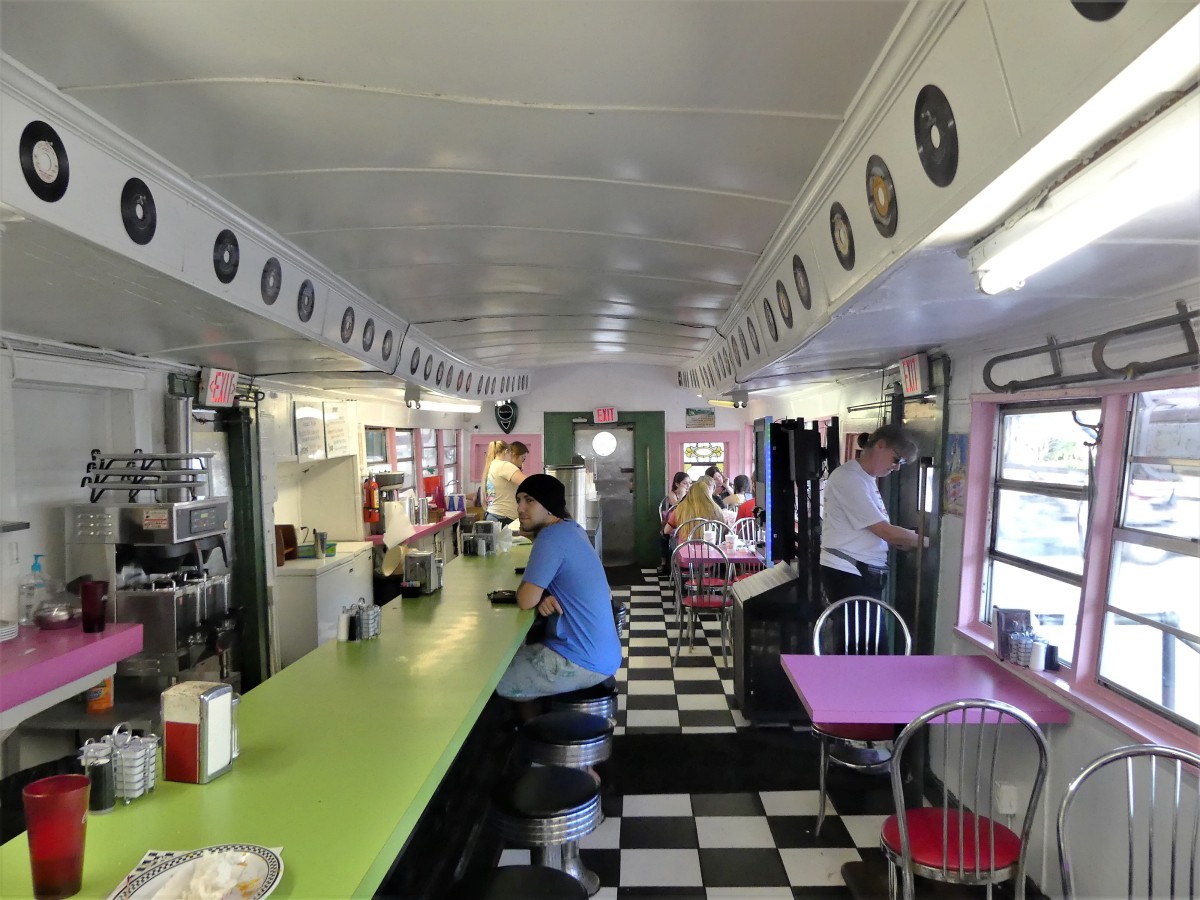 Leah and I shared a hefty order of Fish and Chips. The check came to eight bucks, and it was tasty! 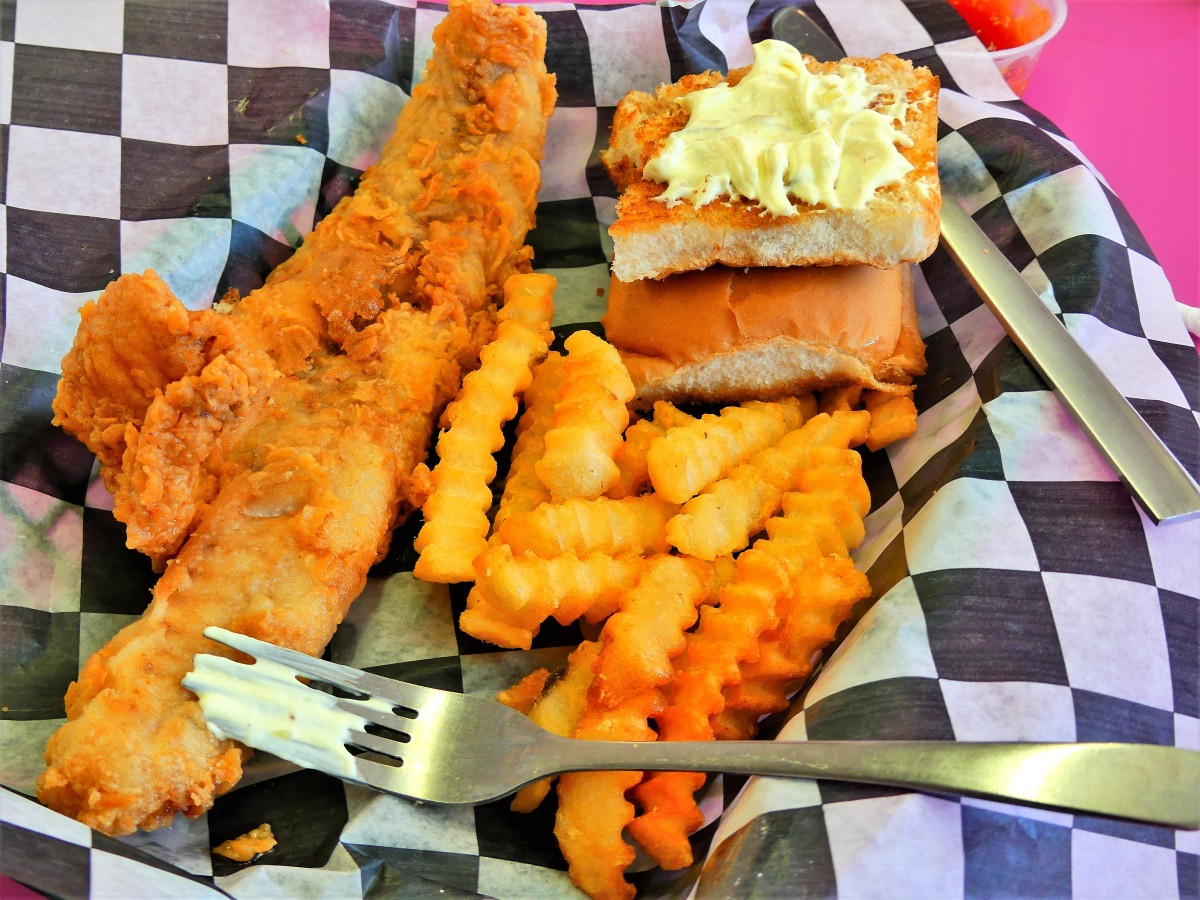 A walk around downtown after our meal left the impression that Palatka is much like a collection of rusty charm pieces; although it boasts a historic district with a melange of classic architectural styles, it’s still fighting to remain relevant.

While there is ample nostalgia here, and a story to tell of old Florida, perhaps all that’s really needed is a broom and a fresh coat of paint.

Enter the Conlee-Snyder Mural Committee in 1998, which has opted to:

…accurately depict the historical, cultural, and natural riches of Palatka and Putnam County in larger-than-life murals.  In sharing these pictorial renderings with visitors and citizens, appreciation of the heritage of the community will be enhanced and developed.

The city’s plan of commissioning a plethora of tribute murals over the past twenty years has given rise to a tourism rebirth, notwithstanding the city’s longstanding and dedicated art scene and attention to local culture. 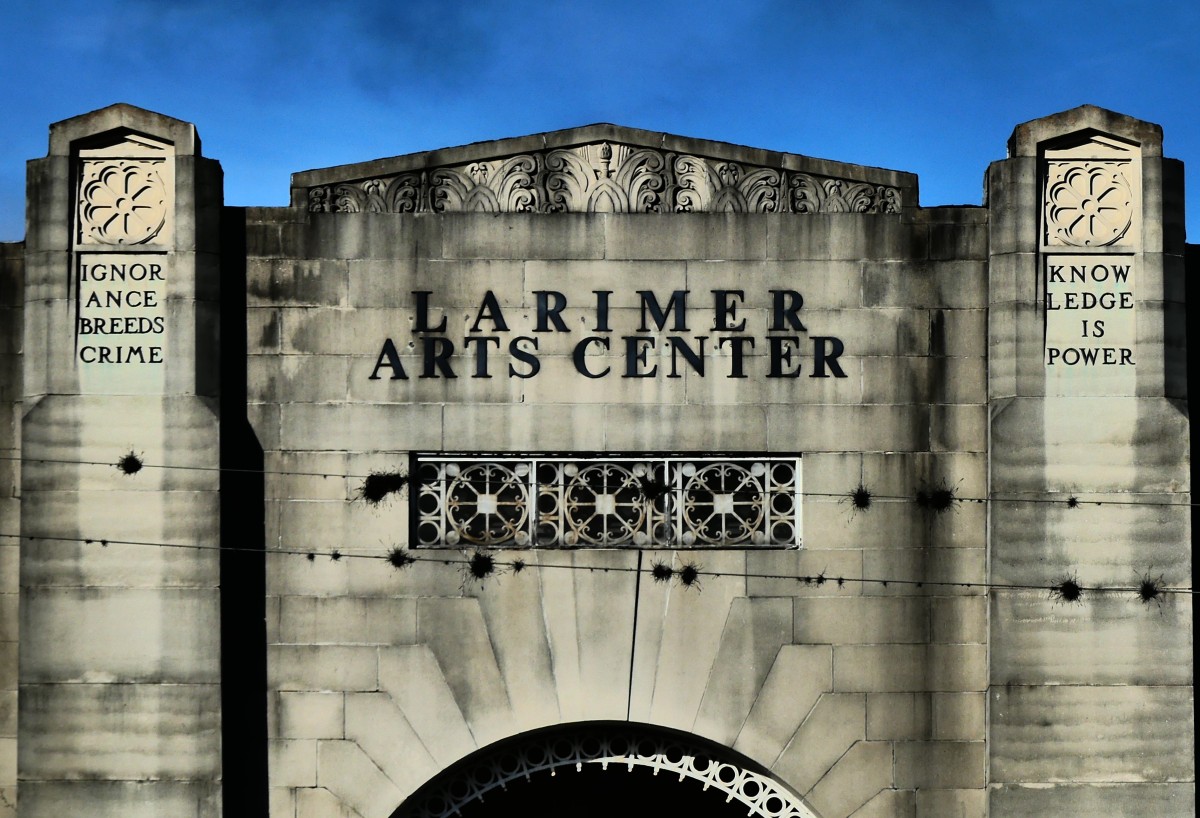 Self-described as the City of Murals, 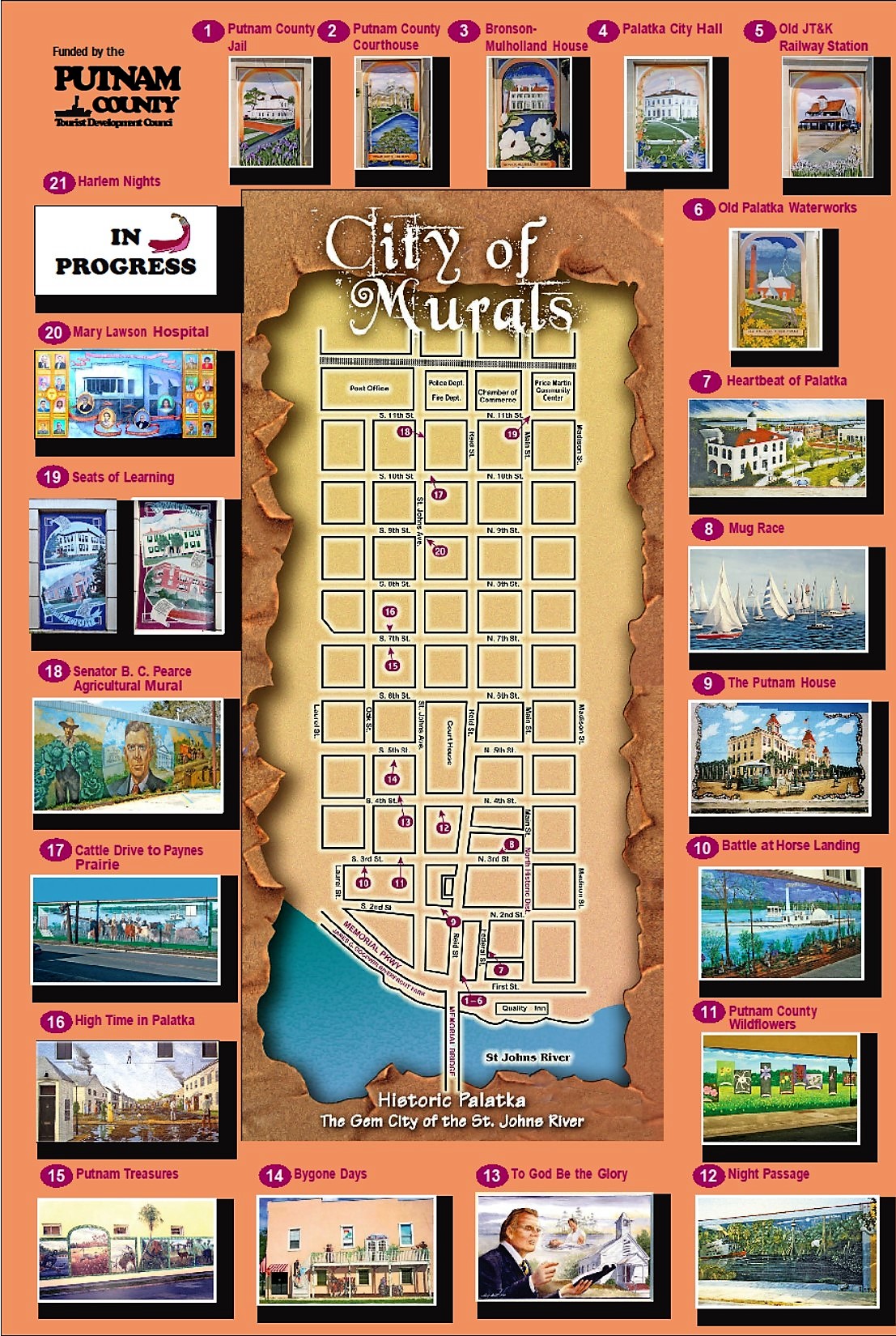 What follows is a photo essay of just a few of them in no particular order:

on Ninth and St. Johns Avenue

on St. Johns Avenue between North Tenth and Eleventh Streets

Other merchants have joined in, beautifying the exteriors of their retail establishments… 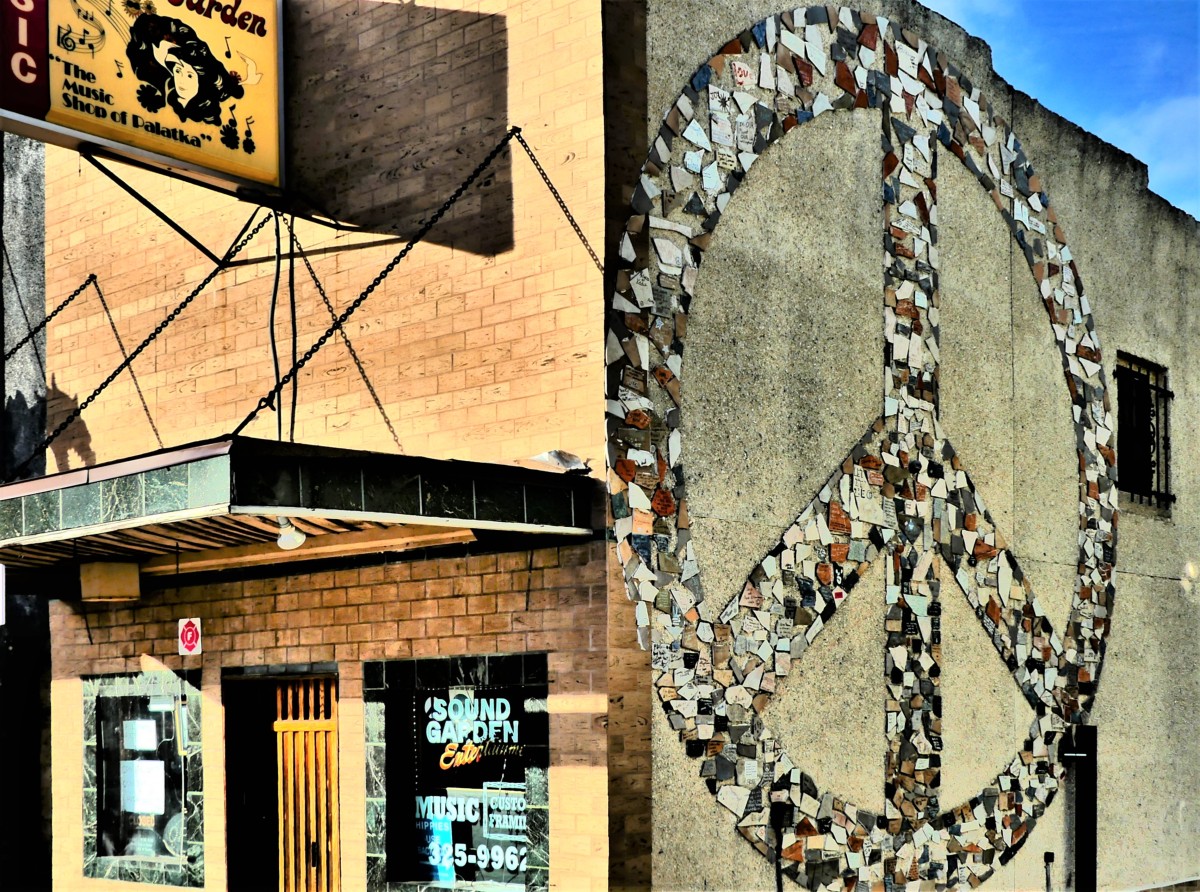 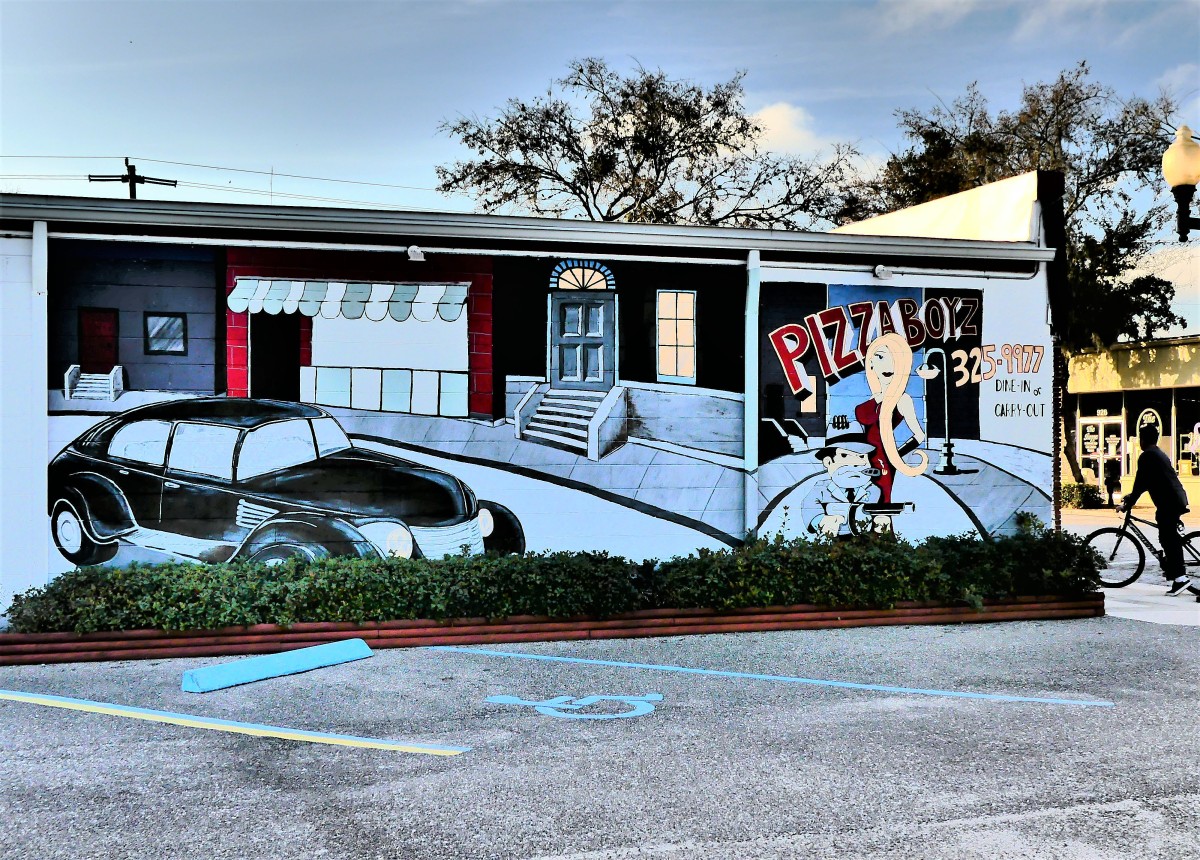 After canvassing the town with my camera for the afternoon, I dropped my work façade, 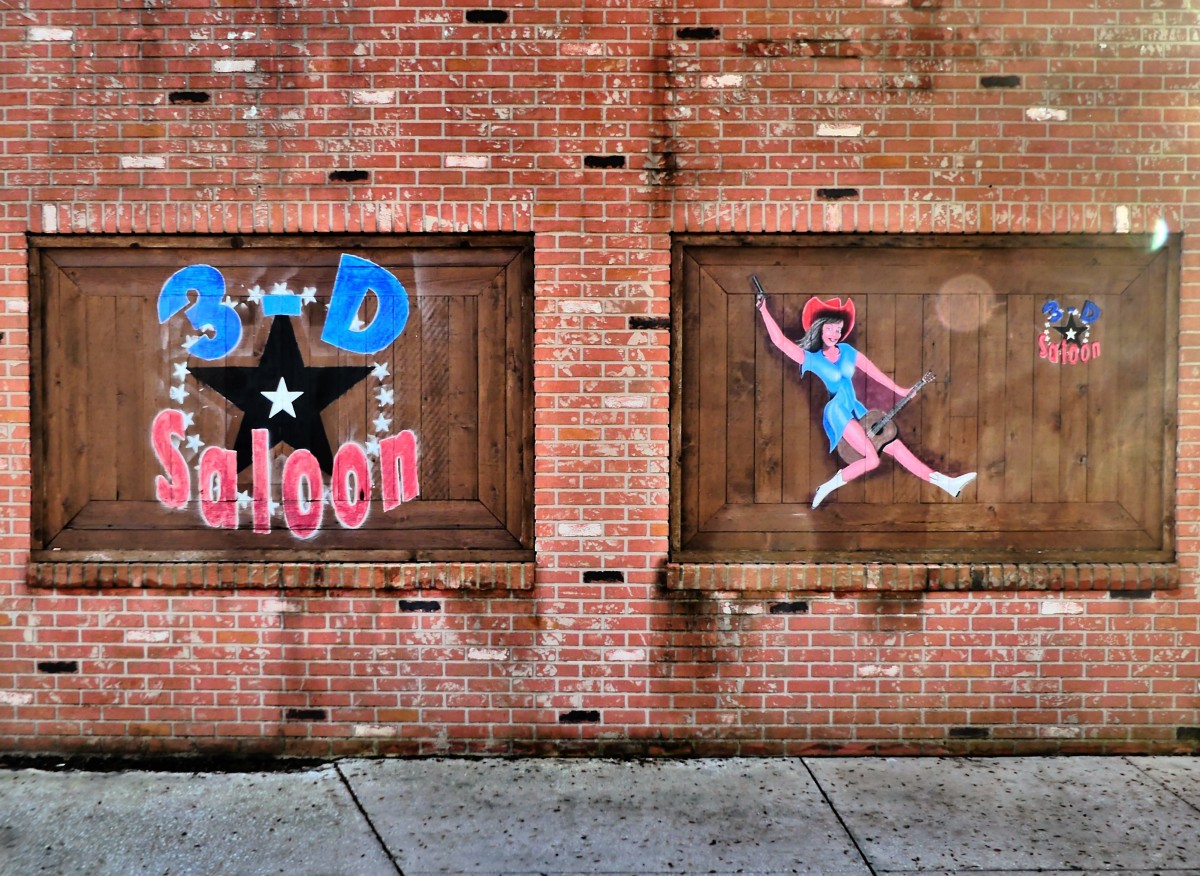 knowing it was definitely time for a drink!