Seemingly, Duluthians have only two seasons: winter and summer. During the 2018- 2019 weather calendar, city residents shoveled snow from October 10 to May 9, breaking a record dating back to 1884. Temperatures were moderate for the remaining months of the year.

But when the last snow melted, the Northlanders traded their shovels and skis for bicycles and hiking shoes–eager to take advantage of the wealth of recreational resources in the vicinity.  Leah and I sampled some of the more popular options during our recent visit.

The 70-mile Hinkley-Duluth segment of the Munger State Trail offers hiking, biking, in-line skating and snowmobiling on a fully paved road, cut through a forested ridge that follows a busy railway.

Leah and I cycled a scenic 8-mile stretch from Buffalo Valley Camping (our temporary home) to the Carlton terminus, 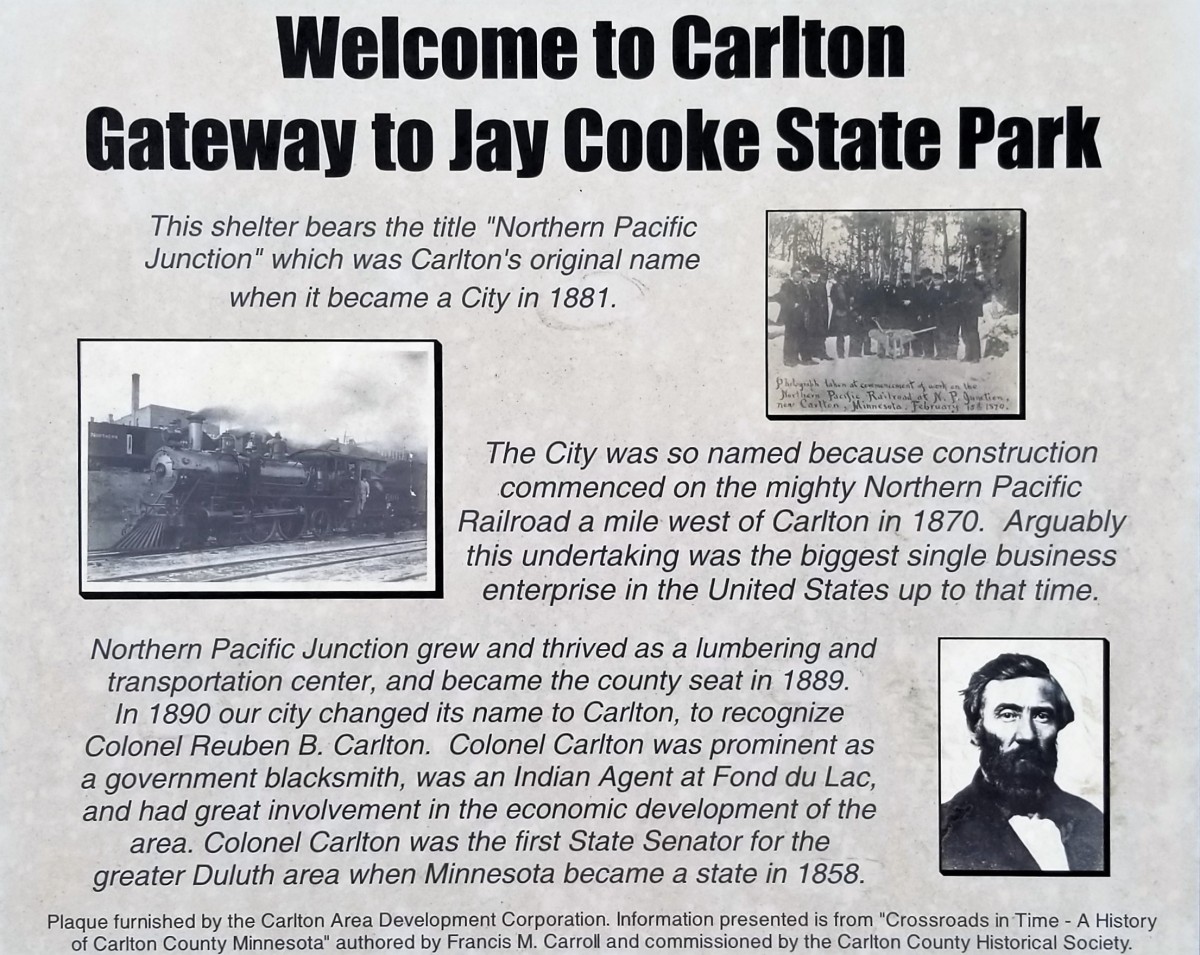 where the trail parallels Forbay Lake…

until it crosses a nearby St. Louis River dam release.

Lunch at Magnolia Cafe in Carlton gave us the energy we needed to pedal back to camp. Kudos on the cold-brewed coffee and gluten-free chocolate chip cookies.

With our energy restored, we drove to Duluth in search of craft beer. Despite a population center under 90,000, Duluth has earned a reputation as Minnesota’s capital of craft beer, boasting more than a dozen production facilities in the area that are eagerly taking advantage of Lake Superior’s pristine waters.

Fitger’s Brewhouse is the oldest and perhaps the most famous active brewery,

with over 100 original recipes…

still brewed at its present location along the Lakewalk.

For views of the city, nothing beats Enger Tower, the highest point in Duluth,

and no better place to see where the city opens up to the sea,

while revealing its industrial underbelly. 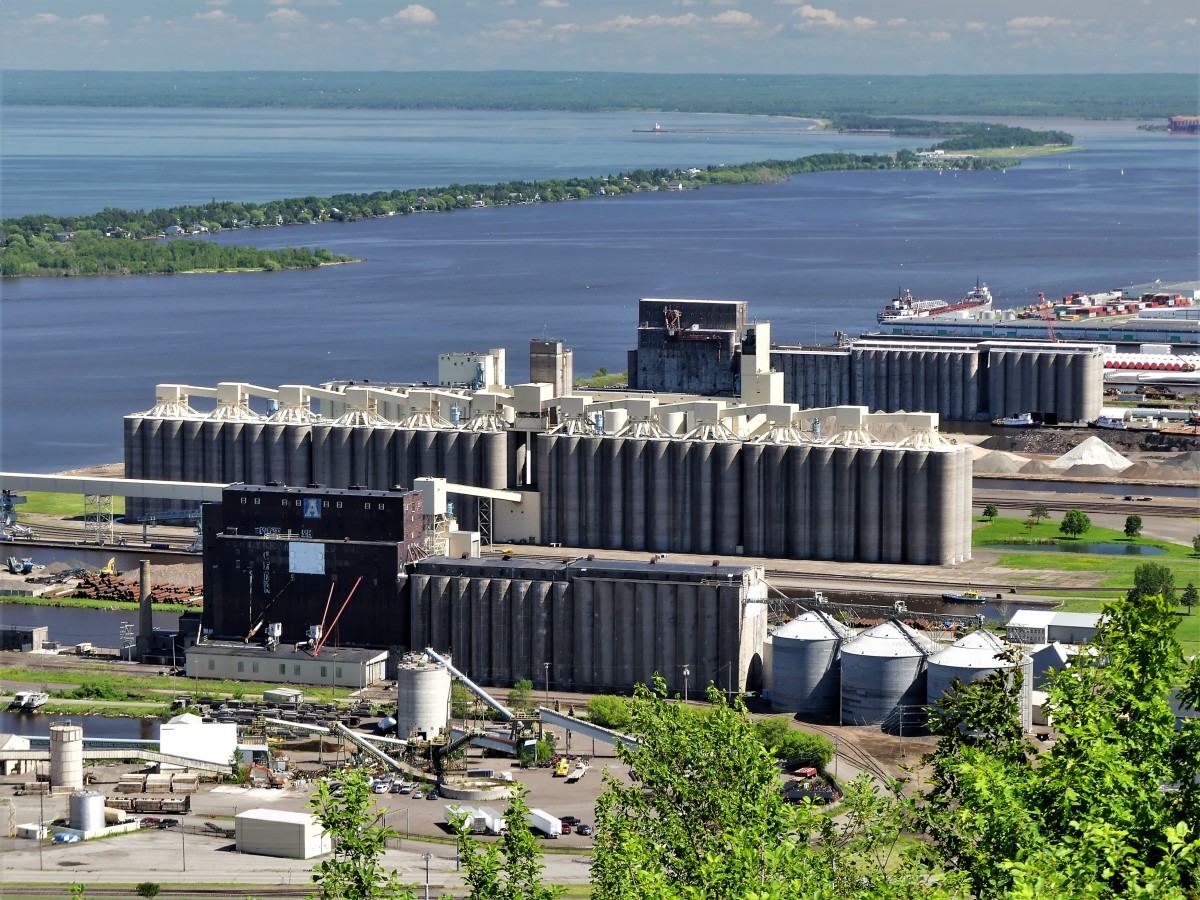 The following day, we were looking for a short but moderate morning hike. All internet indicators pointed to Ely’s Peak, a popular trail reached by following the abandoned Duluth, Winnipeg, and Pacific (DWP) railroad corridor to the entrance of a 1911 railroad tunnel.

The trail was named after Rev. Edmund Ely of Massachusetts, 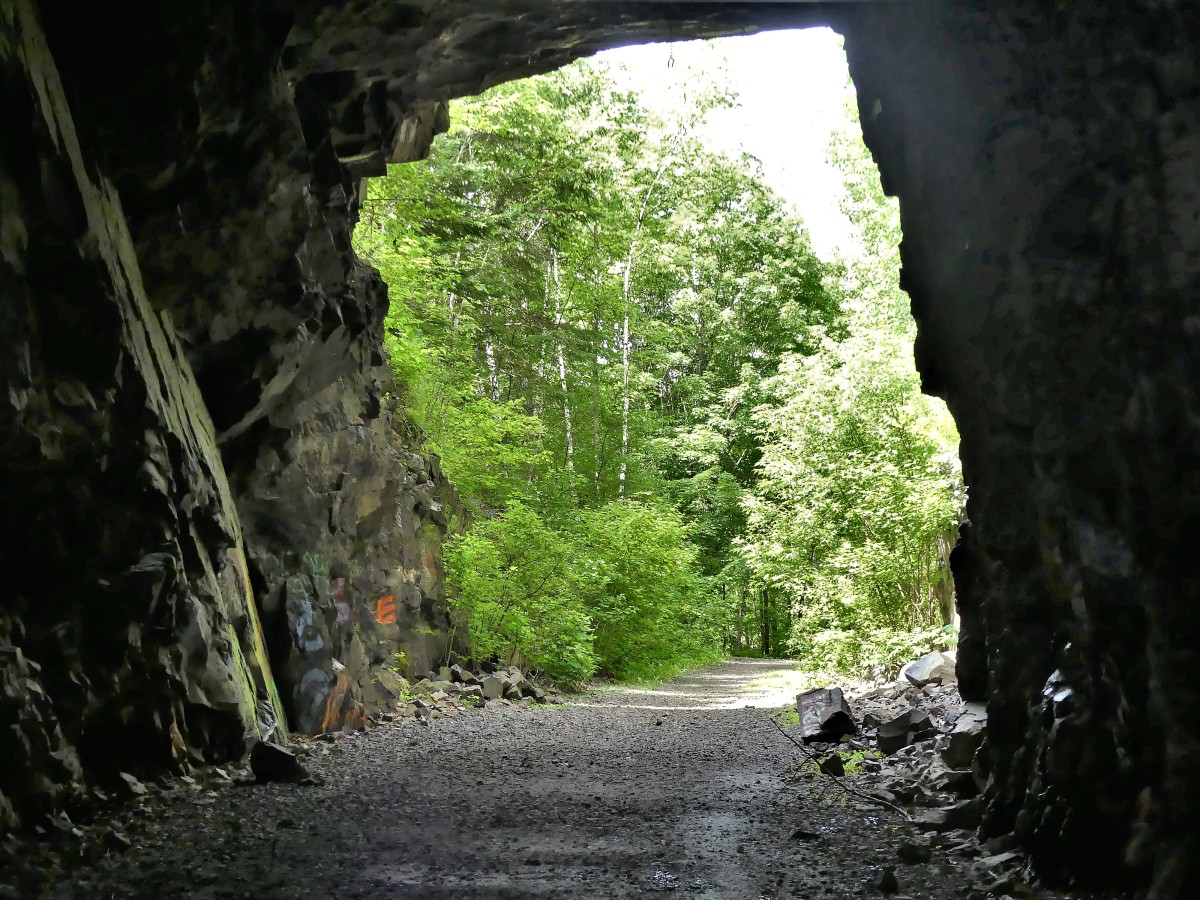 whose mission was converting the Fond Du Lac Native Americans during the mid-1800s. 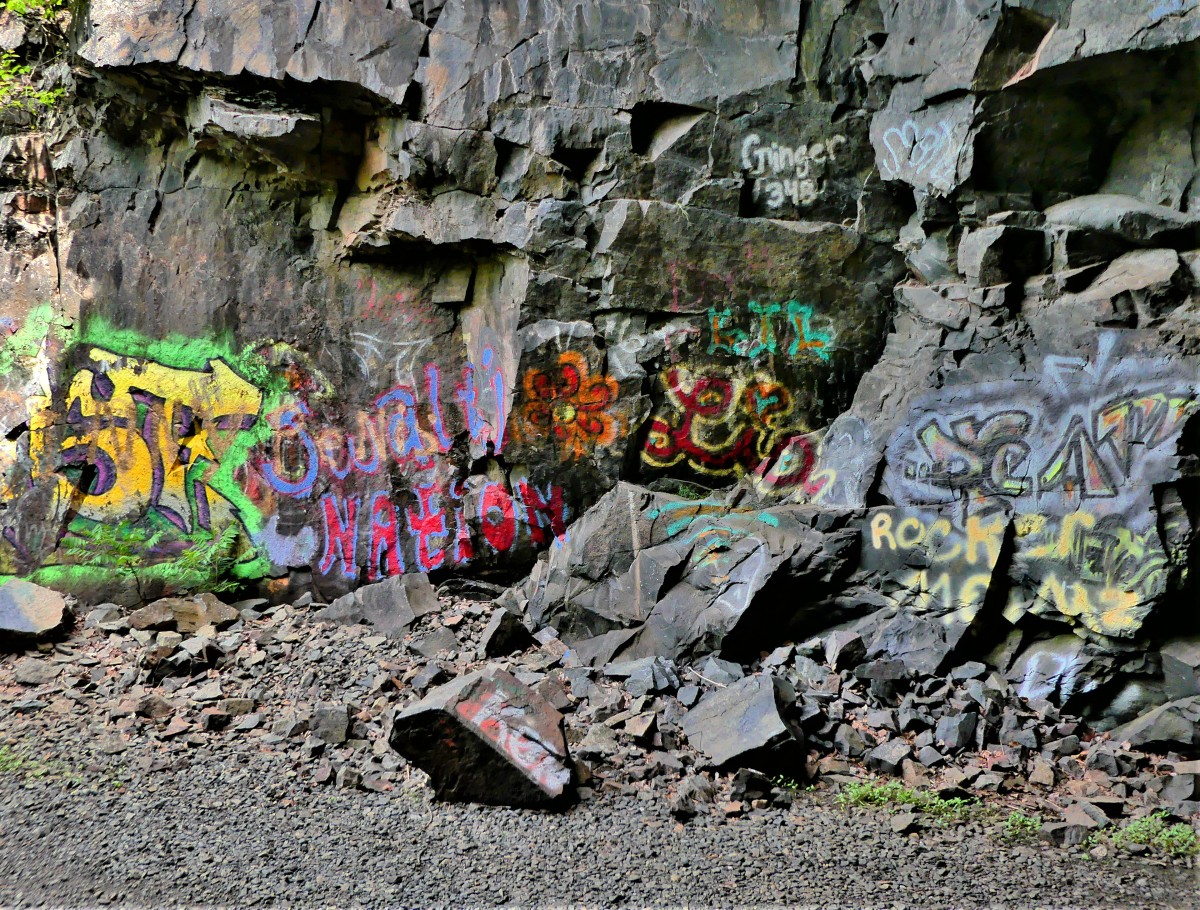 From the tunnel to the top and back is 1.8 miles. The loop takes hikers on a 300 ft. ascent offering far-reaching views of the Fond du Lac Reservation and beyond.

We spent the afternoon touring Glensheen, a 20,000 sq ft. Beaux-Arts-styled mansion surrounded by a 12-acre estate…

built beside Lake Superior between 1905 and 1908 by Clarence Johnston, Sr… 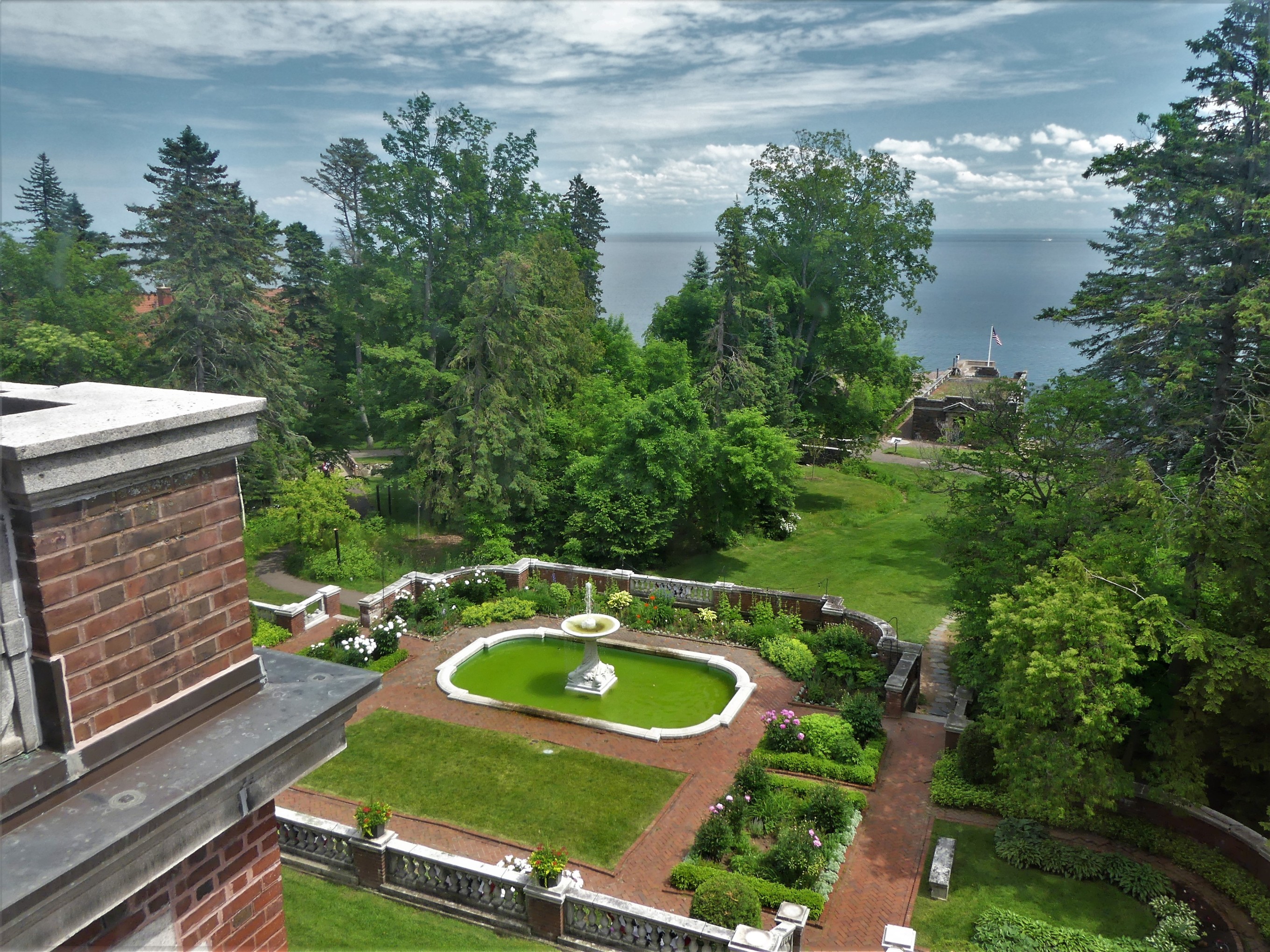 for Chester Adgate Congdon and family.

and the accessories that adorn the house.

But the most unusual part of the tour was what Nick, our docent would not share with the group when asked about the murders of Elisabeth Congdon and her private nurse, Velma Pietila.

Instead, we were referred to a brochure card with a disclaimer and few details. 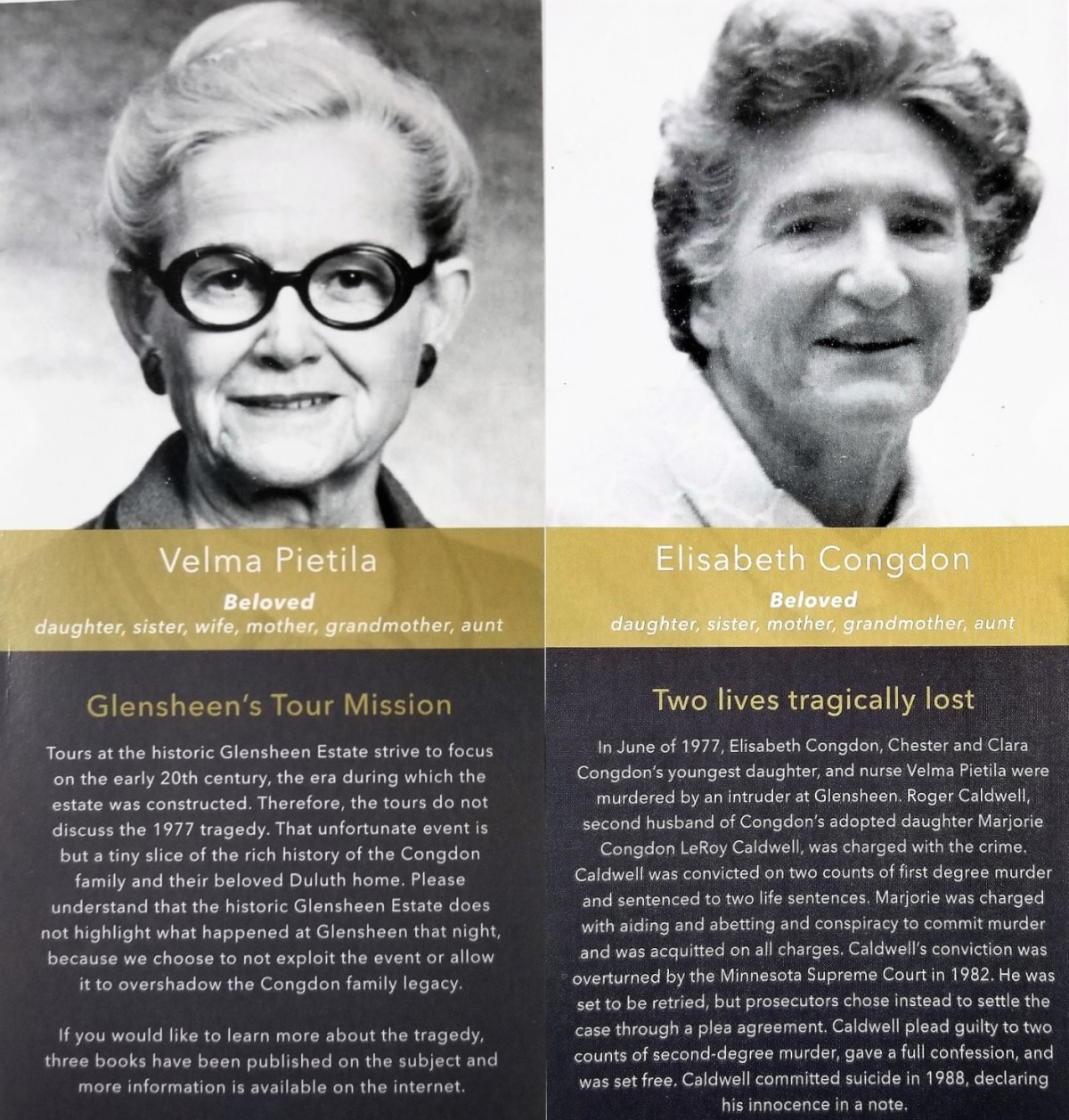 It was a brutal crime that was sensationalized by the media, and still remains unsolved.

Leah and I concluded our day sitting in stadium chairs by the Glensheen boathouse pier, noshing on local food truck fare while listening to Charlie Parr, a local folk singer performing an evening of Minnesota moonshine music to kick off the 5th season of Concerts on the Pier.

It was the perfect way to end the day:

enjoying the sunshine and the breeze coming off the lake;

meeting and appreciating new people around us;

watching a mish-mash of vessels manuevering through an ad hoc harbor;

and being interviewed by Ryan Juntti, for WDIO’s 6:00 PM News.

Have an enjoyable and safe weekend.