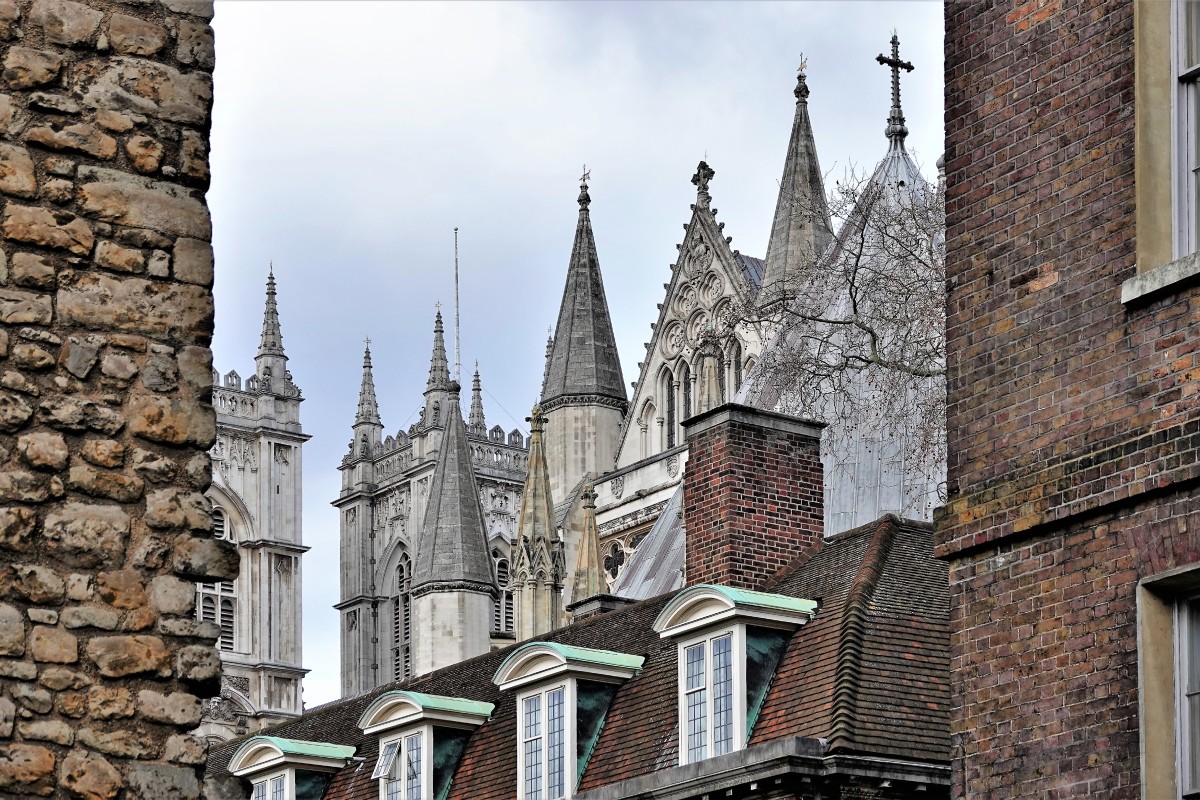 Our time in London was limited–only two days to explore the sights. With so much to see and so little time, Leah and I buckled down for a tour of London’s greatest hits, which easily includes a visit to Westminster Abbey, England’s Gothic royal church, and familiar site for British coronations and weddings, and national celebrations dating back to the 11th century.

We walked around the massive structure until we found the gate entry. Signage informed us that access to this London landmark would set us back 23£ ($30 with current exchange rates), but seniors were entitled to a 3£ discount. 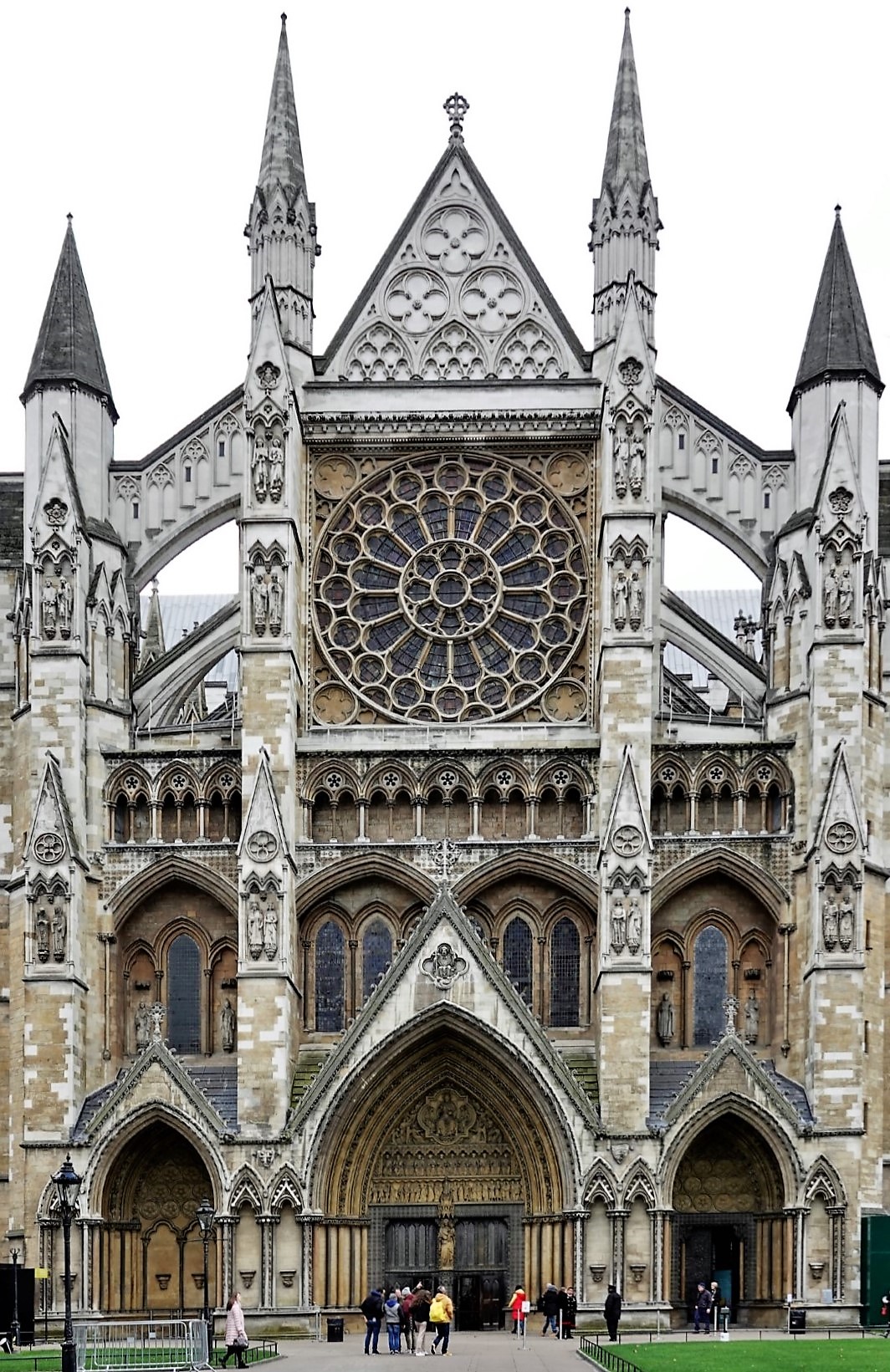 The price seemed steep, but the opportunity to walk through history doesn’t come along every day. 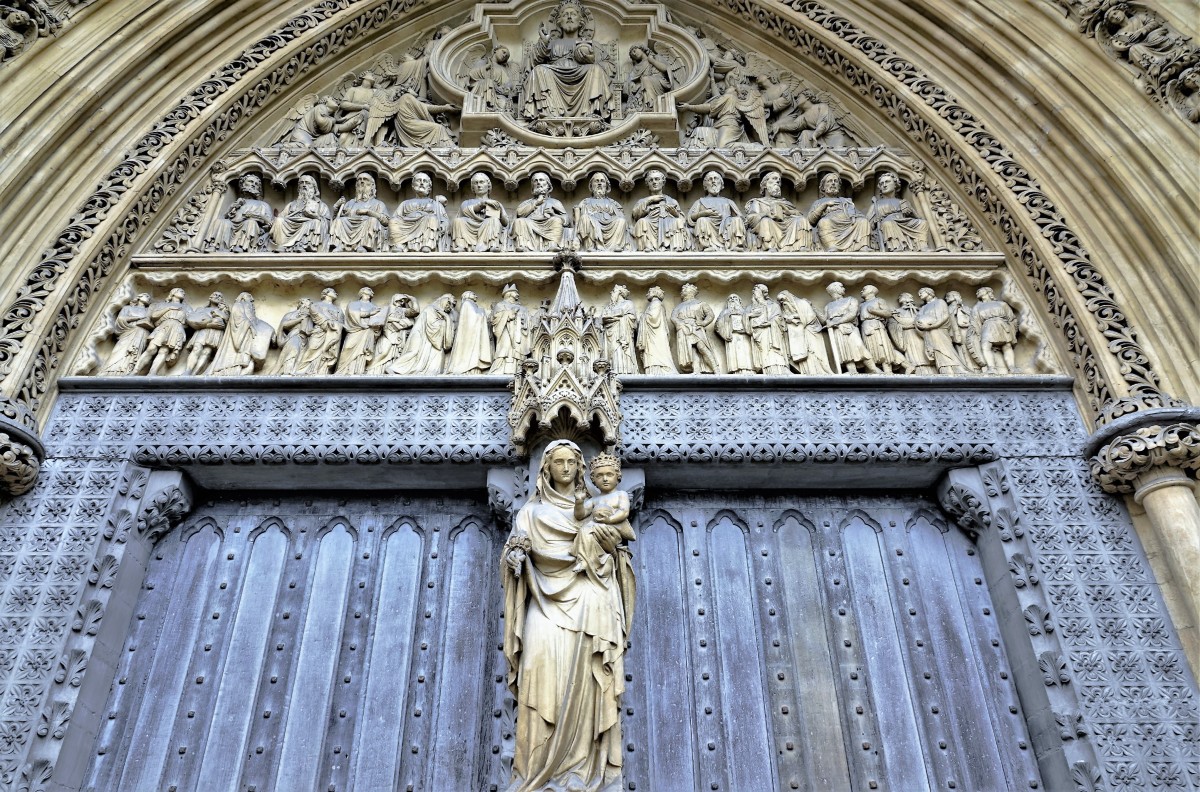 There is a strict NO PHOTOGRAPHY policy inside, which the church keepers will tell you is for the benefit of giving their guests an experience without distraction, and to perserve the solemnity of a working house of worship.

Nevertheless, we walked through the transepts and chapels listening to interactive video recordings while admiring the captivating architecture and memorials, and reflecting on the notion that Charles Darwin and Isaac Newton lie beneath our feet.

But with a newly purchased camera dangling around my neck (Sony RX10 IV), I couldn’t resist the urge. 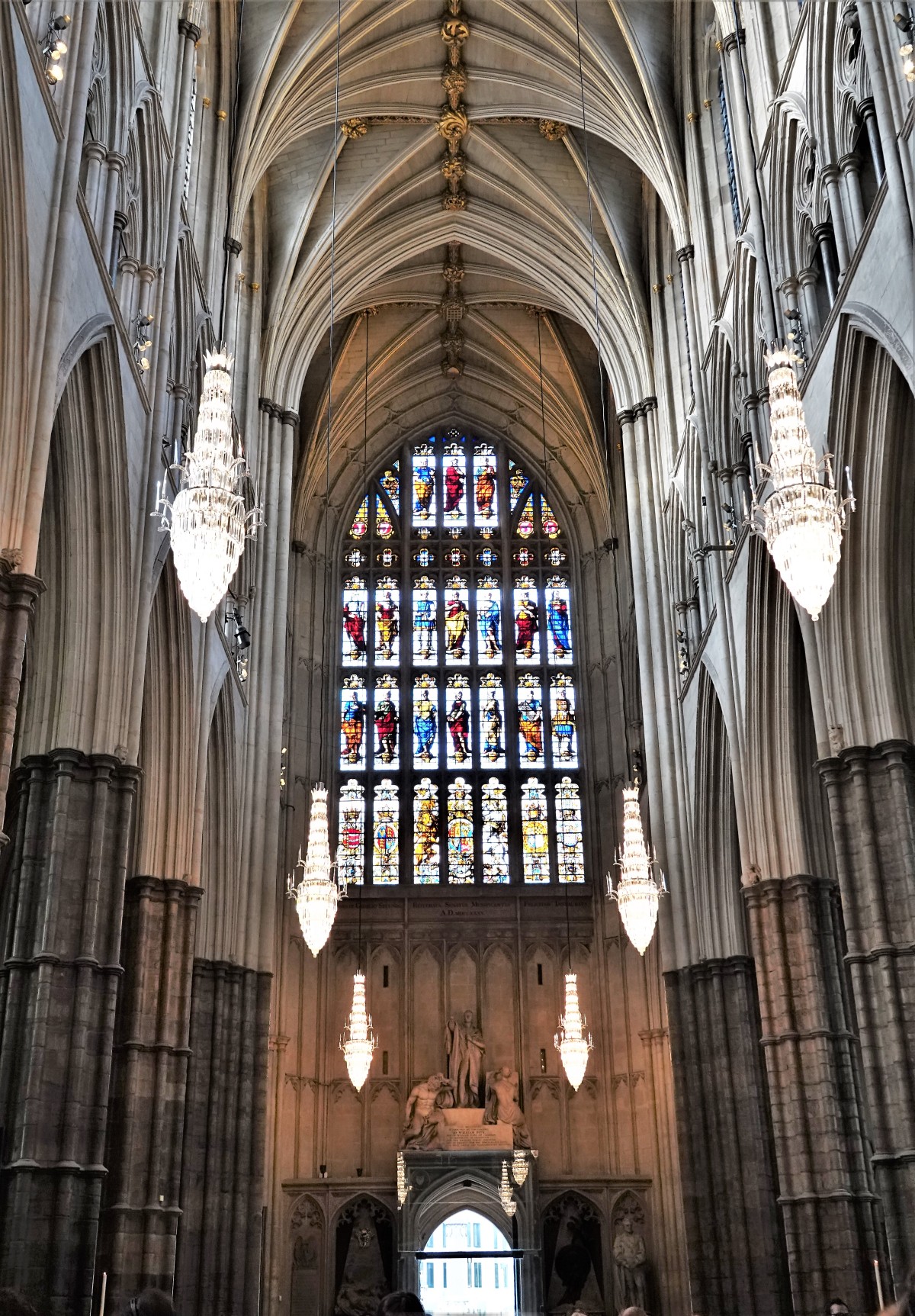 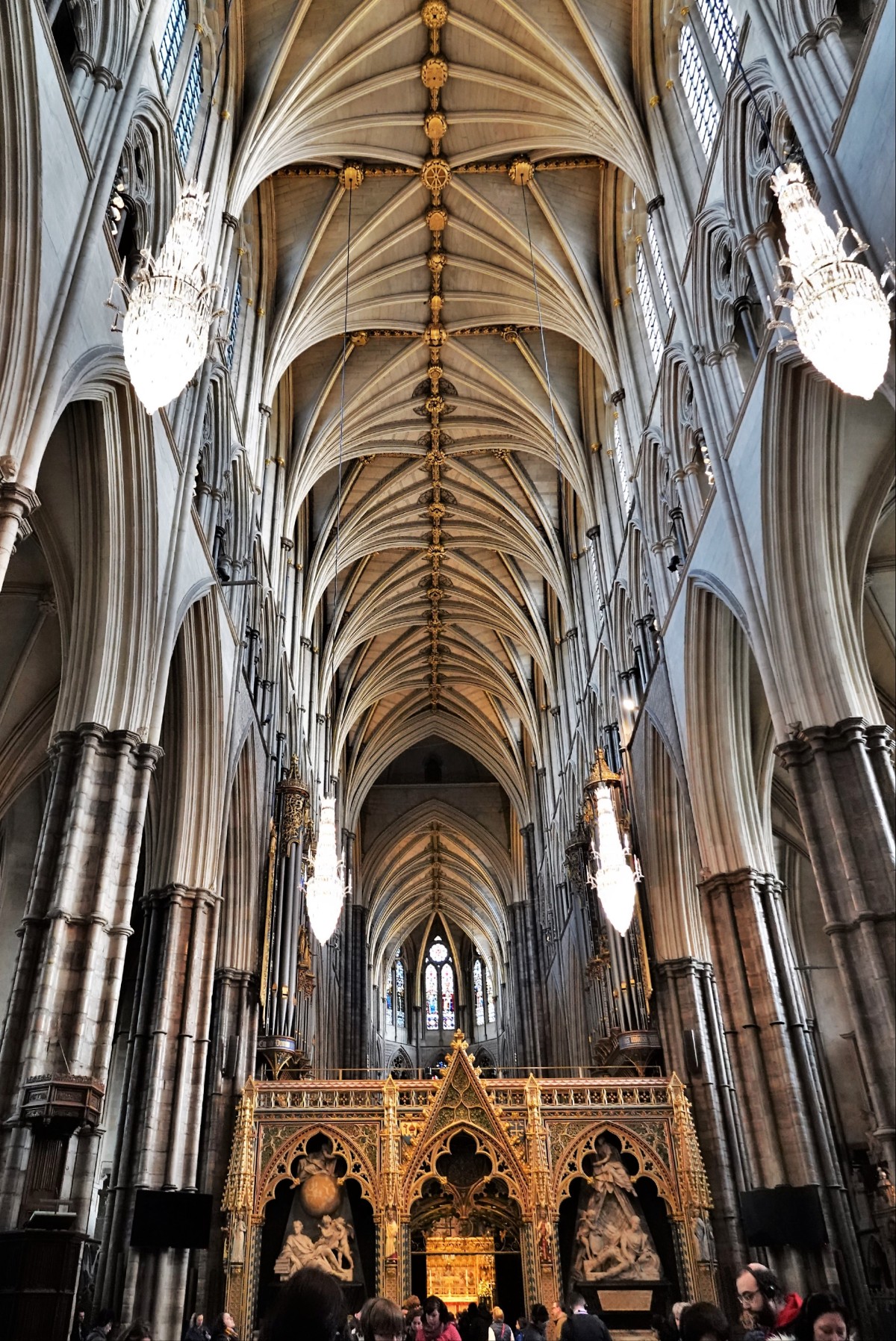 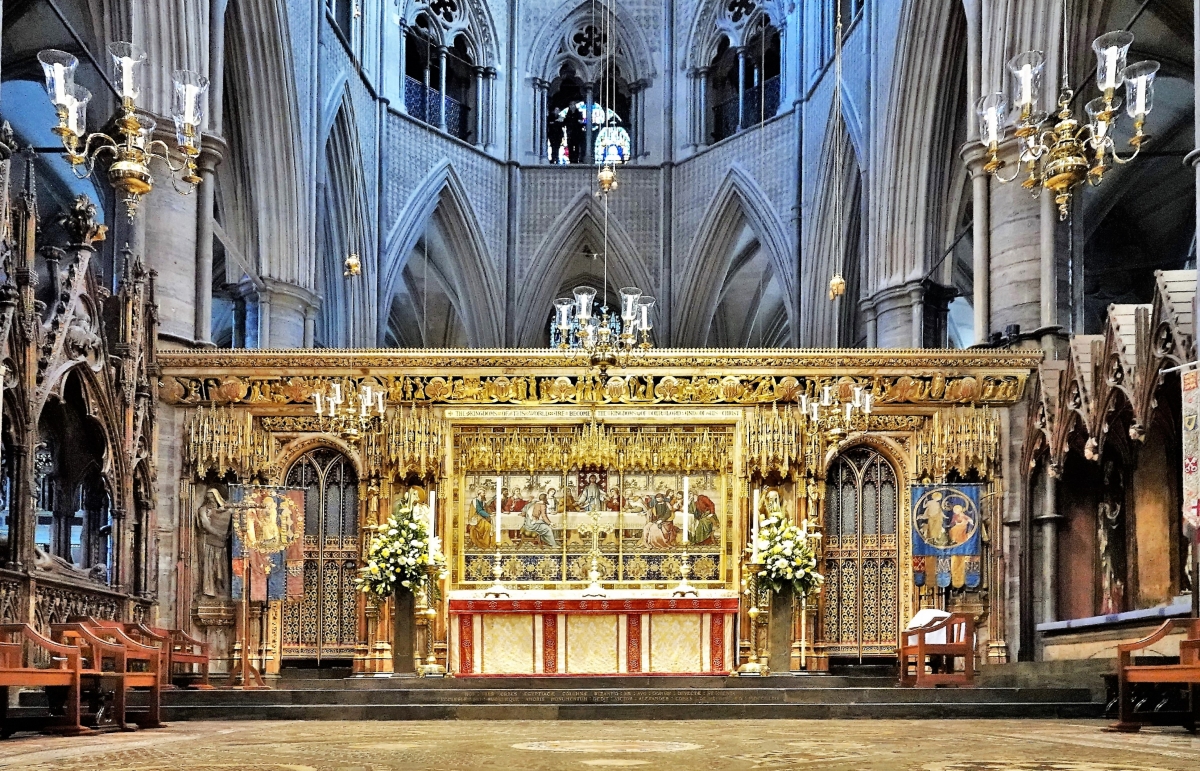 until I was admonished by an Abbey marshal in Henry VII’s Lady Chapel while capturing an overhead view from a polished mirror. 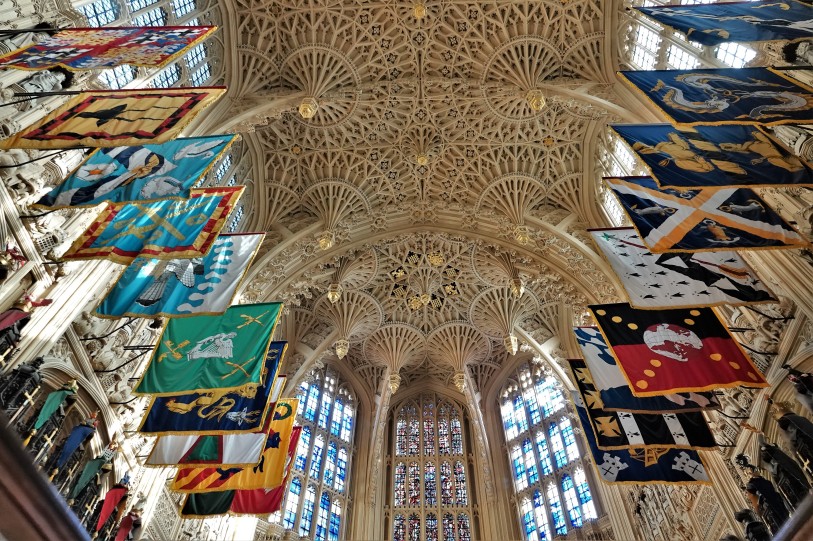 My bad! He wouldn’t leave my side until I reversed the shade and capped my lens. Even then, I could feel his eyes trained on me as I walked around the royal tombs acting as contrite as I could possibly be.

Fortunately, photography IS allowed in the College Garden, 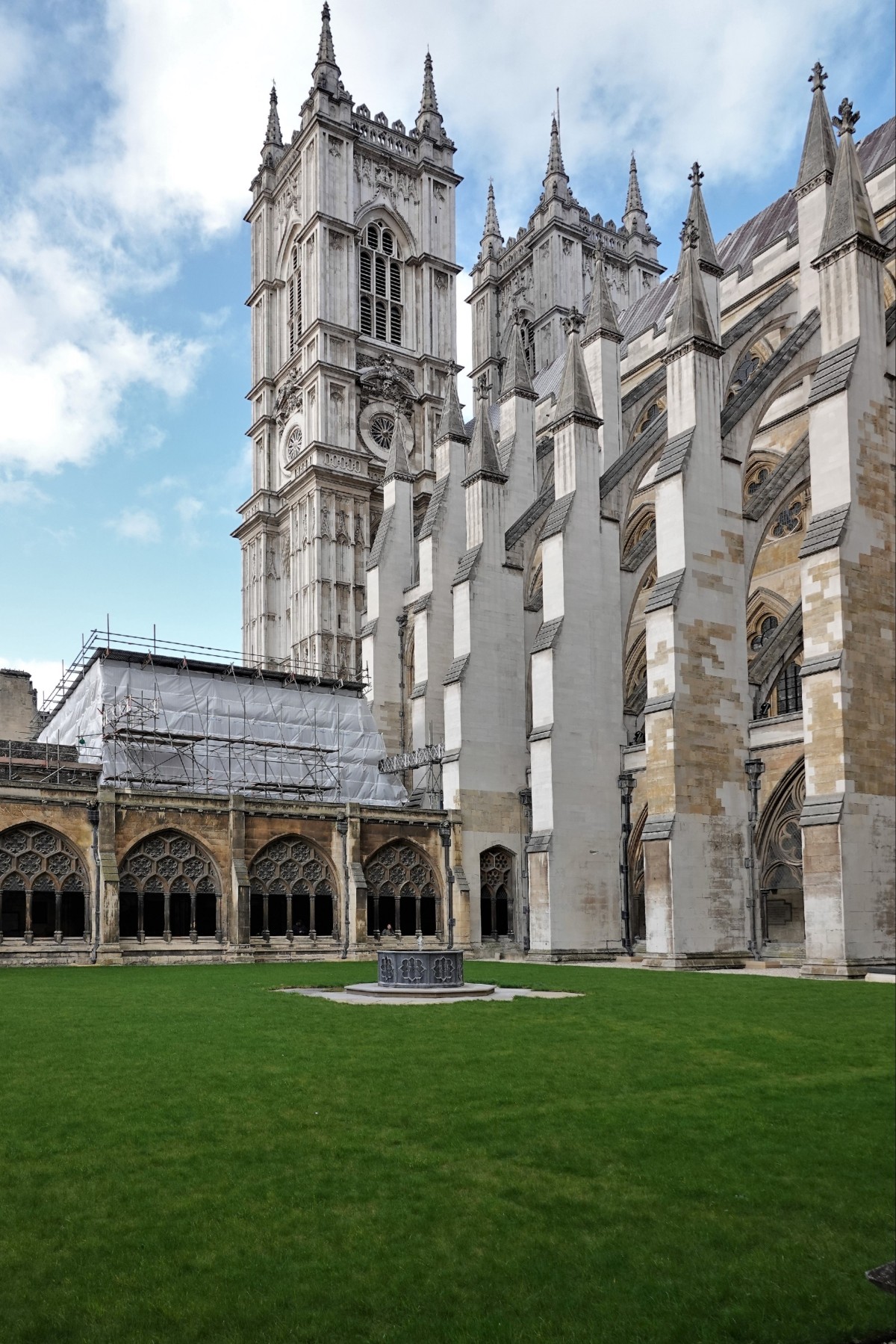 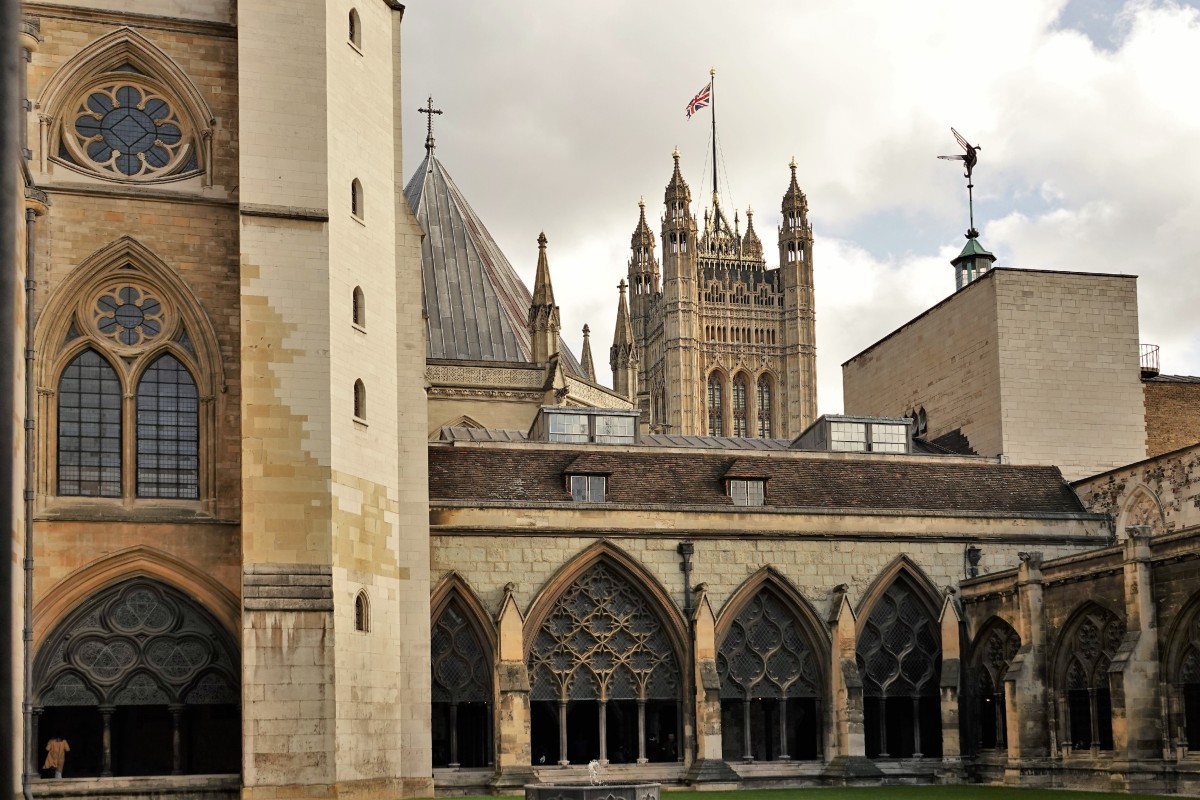 and the Chapter House. 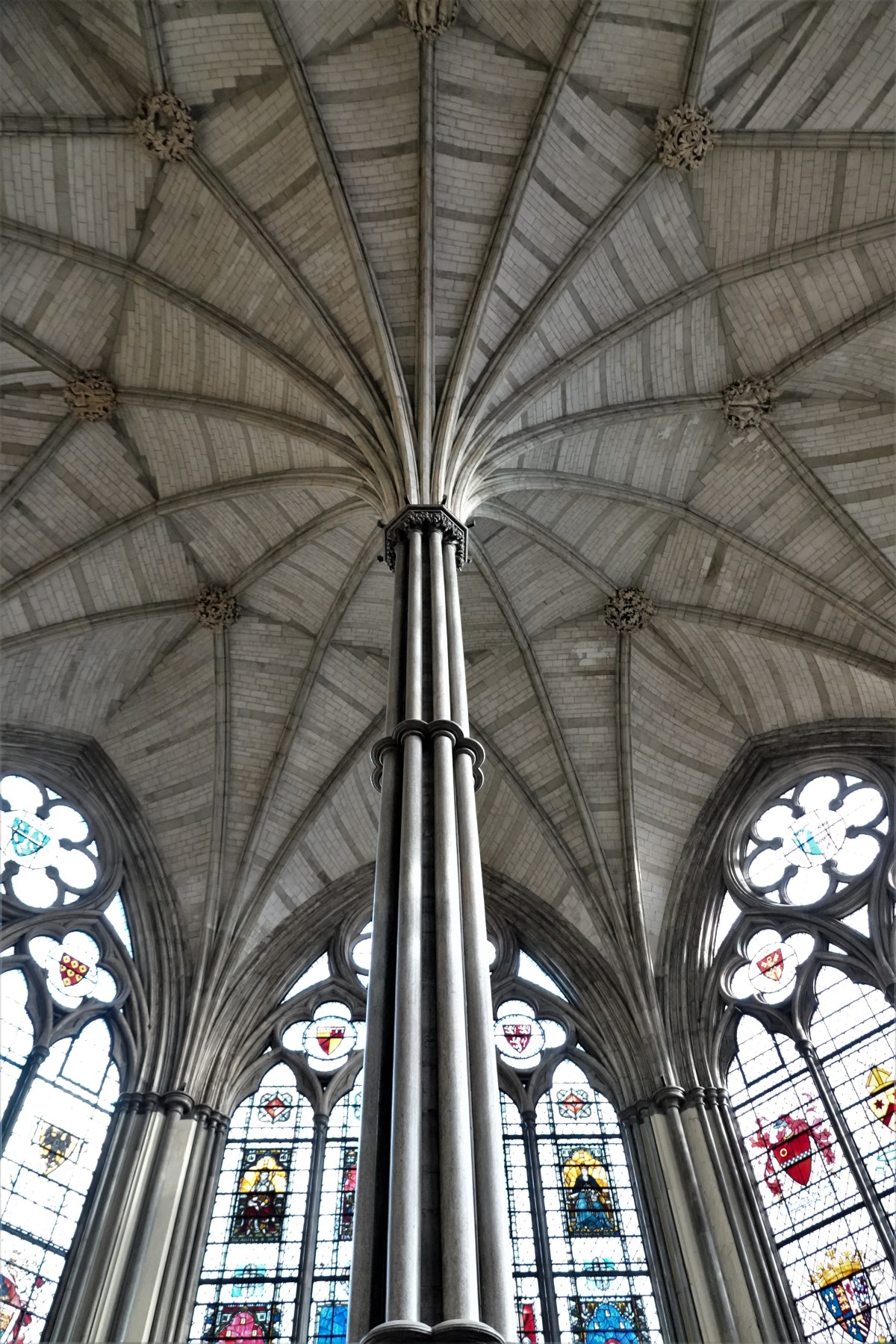 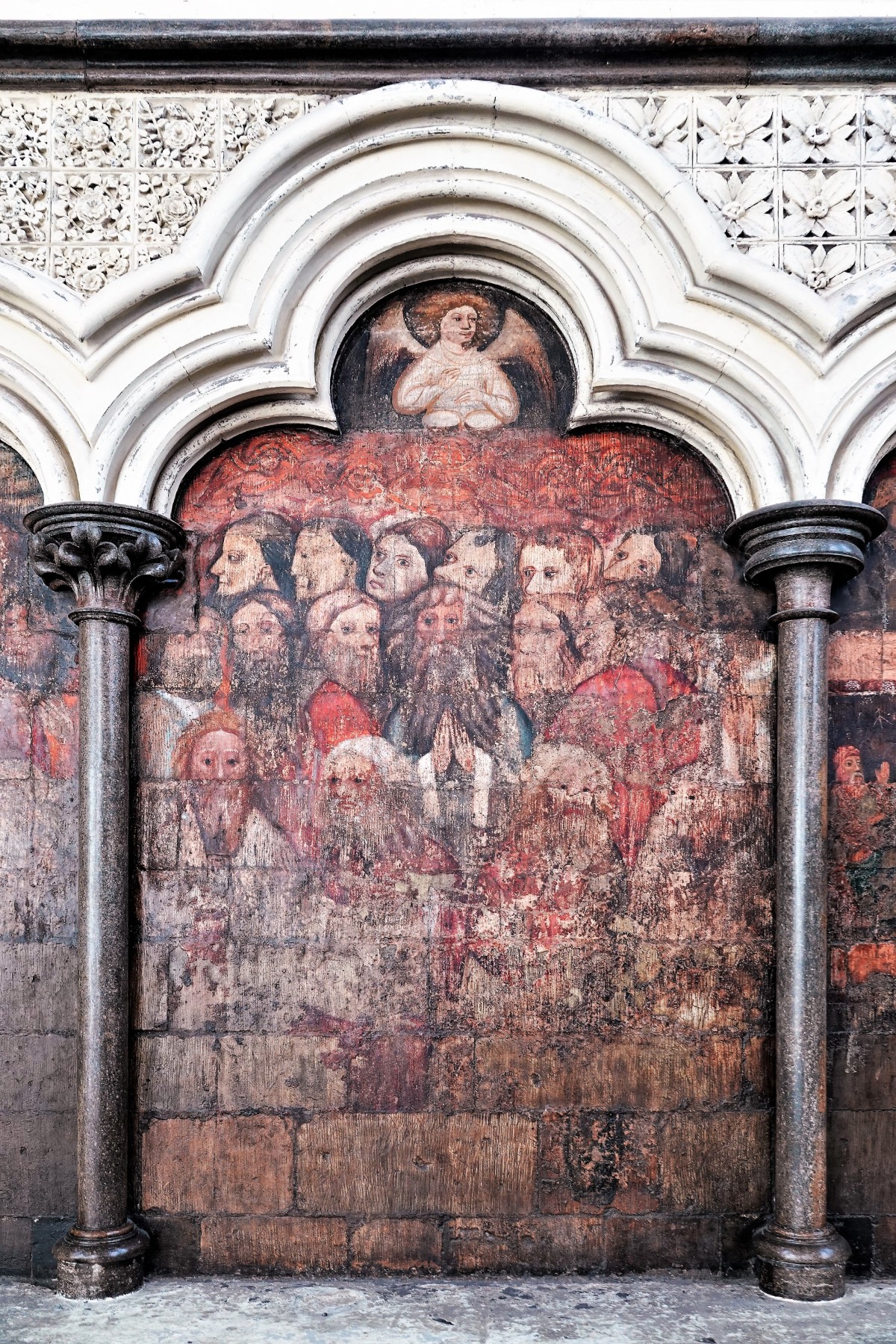 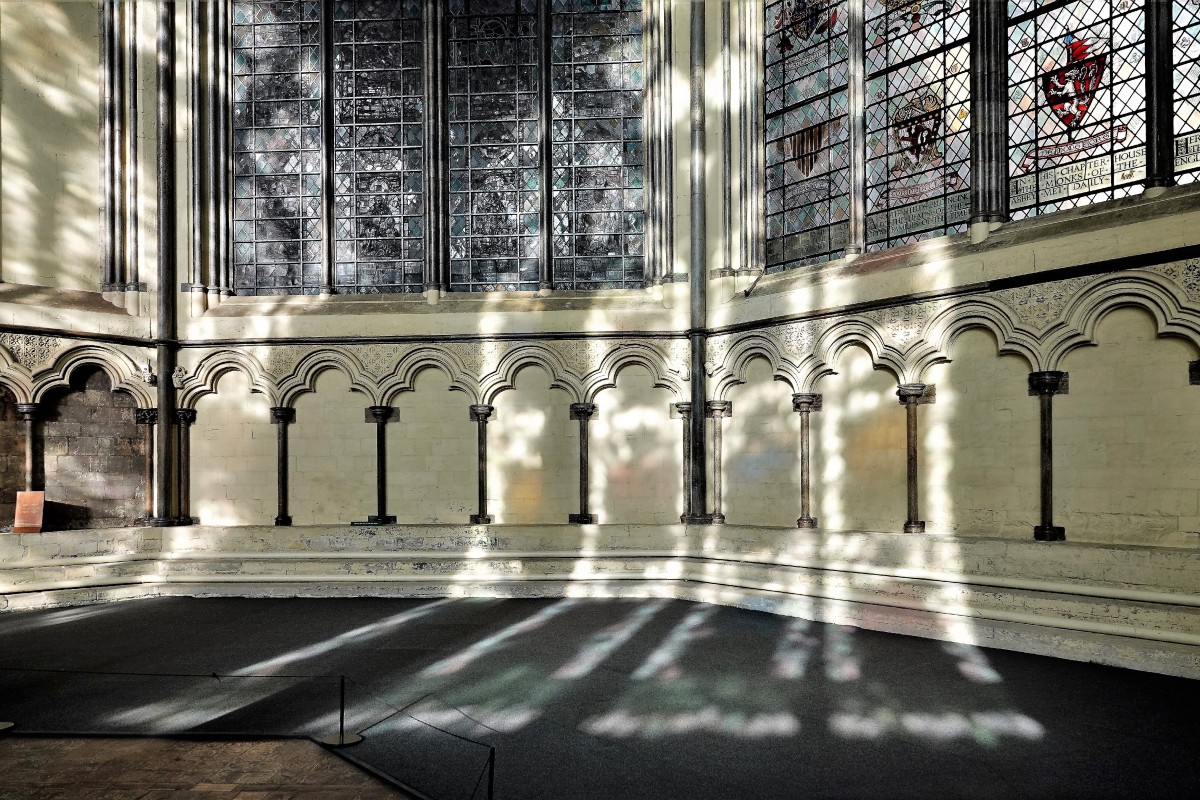 As we prepared to leave through the Great West Door, Leah and I walked past the Grave of the Unknown Warrior toward the Coronation Chair behind glass, I was so tempted to surreptitiously point and shoot…but thought better of it. Lesson learned.

As serendipity would have it, the Marshal and I reunited outside, and all was forgiven. 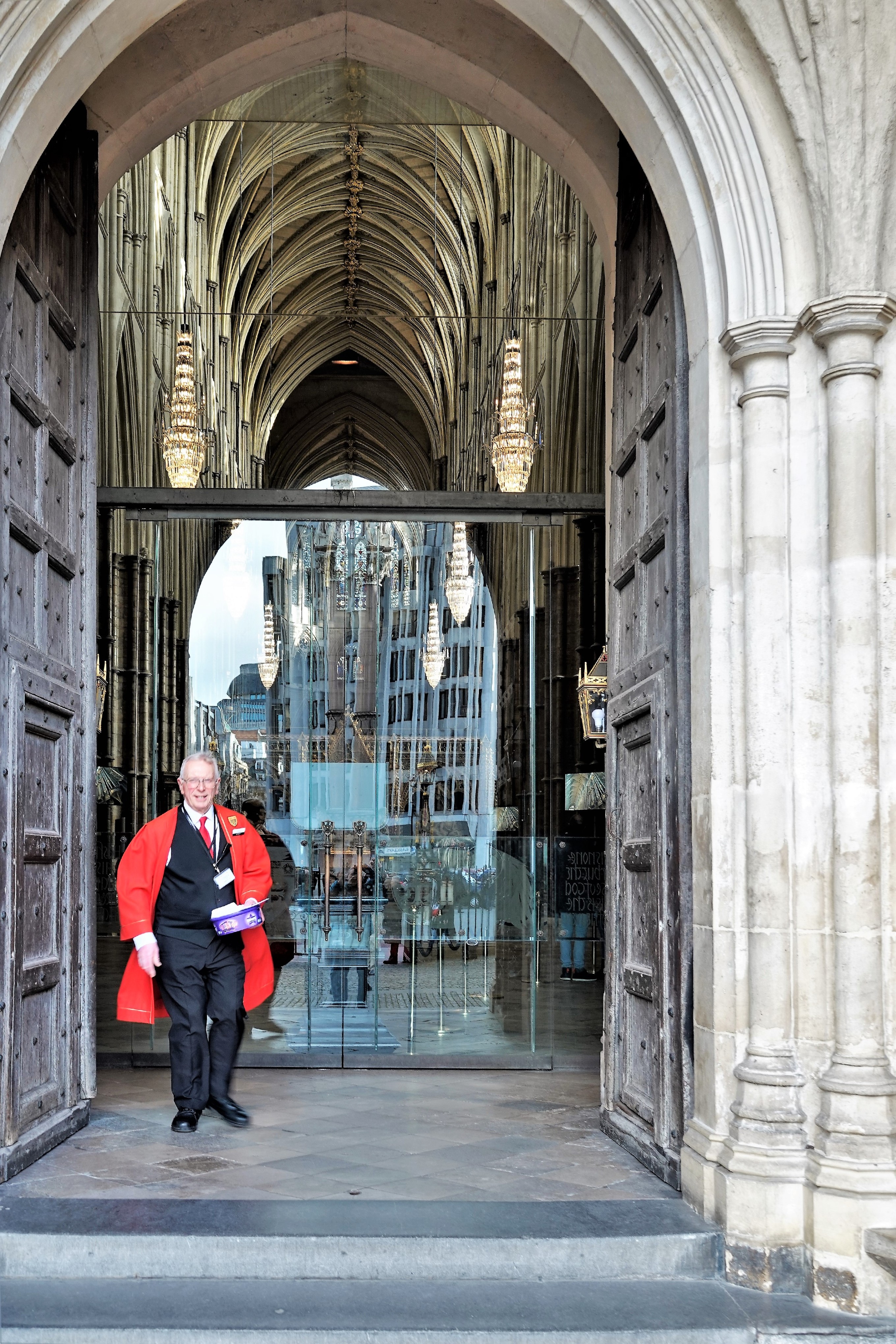 We parted as friends, and I believe I was absolved for my vainglory sin. He used our final moments together to tell us the tale of Grand Duchess Elizabeth Feodorovna, his favorite modern martyr, whose ediface adorns the Abbey’s Great West Door. According to Marshal John…

Elizabeth of Hesse-Darmstadt was born on 1st November 1864. She was named after Elizabeth of Hungary (1207-1231), a Catholic saint of her own family. Her mother died when she was a child, and she came to England to live under the protection of her grandmother, Queen Victoria. If her childhood was Lutheran, the religious culture of her adolescence was distinctively Anglican. In 1884 Elizabeth married Grand Duke Sergei Alexandrovich, the fifth son of Tsar Alexander II of Russia. Elizabeth found Orthodoxy increasingly absorbing, and in 1891 she adopted the faith.

Although her life had assurance and all the comforts of eminence, it rested on fragile foundations. The Tsarist state maintained its grip over a changing society by repression. Talk of revolution persisted, and grew louder. Acts of terrorism mounted. On 18th February 1905, the Grand Duke Sergei was assassinated.

This marked a turning point in Elizabeth’s life. Now she gave away her jewellery and sold her most luxurious possessions, and with the proceeds she opened the Martha and Mary home in Moscow, to foster the prayer and charity of devout women. Here there arose a new vision of a diaconate for women, one that combined intercession and action in the heart of a disordered world. In April 1909 Elizabeth and seventeen women were dedicated as Sisters of Love and Mercy. Their work flourished: soon they opened a hospital and a variety of other philanthropic ventures arose.

In March 1917 the Tsarist state, fatally damaged by the war with Germany, collapsed. In October, a revolutionary party, the Bolsheviks, seized power. Civil war followed. The Bolshevik party was avowedly atheistic, and it saw in the Orthodox Church a pillar of the old regime. In power, it persecuted the Church with terrible force. In time, hundreds of priests and nuns were imprisoned, taken away to distant labour camps, and killed. Churches were closed or destroyed. On 7th May 1918 Elizabeth was arrested with two sisters from her convent, and transported across country to Perm, then to Ekatarinburg, and finally to Alapaevsk. On 17th July the Tsar and his family were shot dead. During the following night Elizabeth, a sister from SS Mary and Martha named Varvara, and members of the royal family were murdered in a mineshaft.

In the Soviet Union Christianity survived in the face of periodic persecution and sustained oppression. But Elizabeth was remembered. In 1984 she was recognized as a saint by the Russian Orthodox Church Abroad, and then by the Moscow Patriarchate in 1992.

I’m certain that Saint Elizabeth, in her charity, would have pardoned me too. 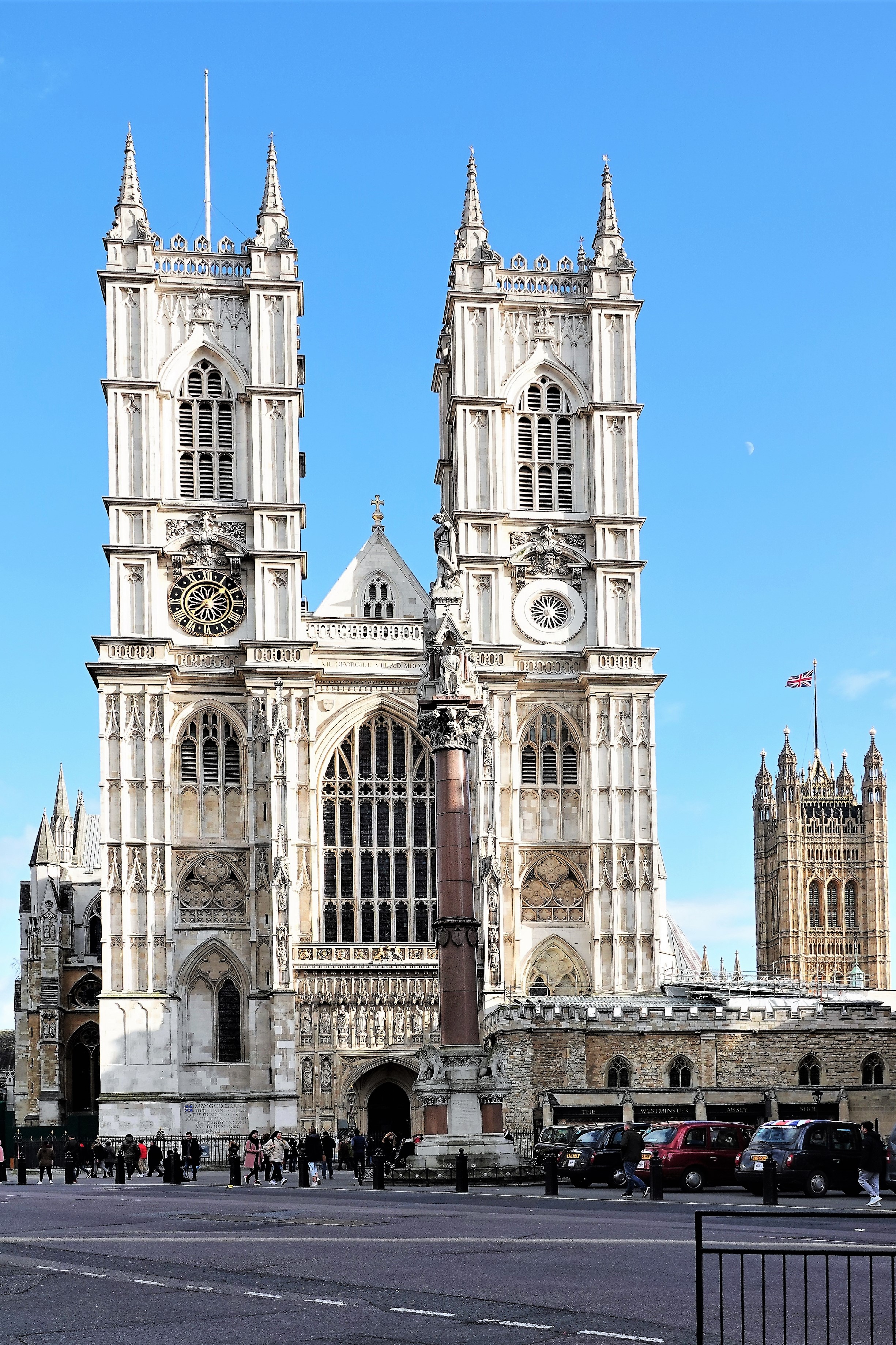 12 thoughts on “Photos I Shouldn’t Have Taken”