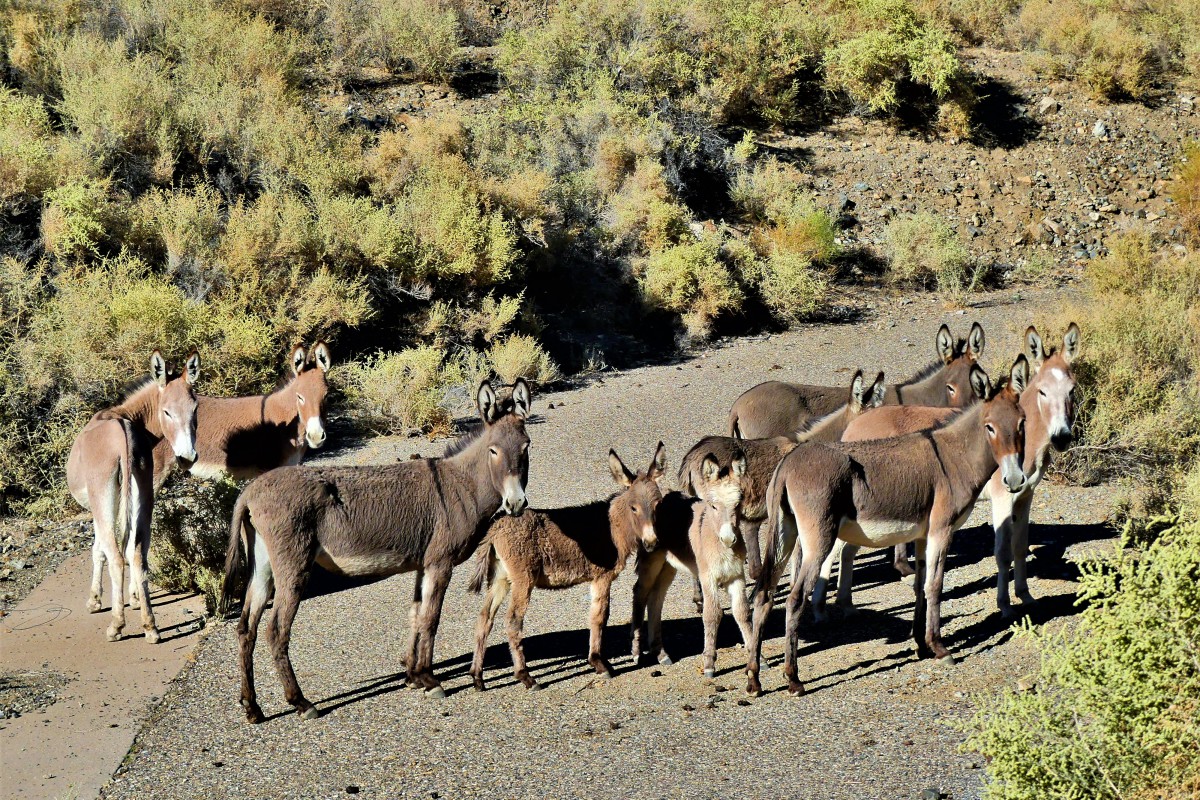 October’s arrival has ushered in cooler weather, granting a seasonal pardon from the intense summer heat. Today’s forecast for Death Valley is expected to peak at only 101° F, which is still good news for lizards, Steve Bannon, and cockroaches, but less ideal for humans.

We awoke to the sounds of early morning buzz around Stovepipe Wells.

A steady stream of early risers traditionally flood the park before the sun becomes too forbidding. Fortunately for us, they will likely swarm to the iconic hot spots, which only accounts as a pen stroke of Death Valley’s complex signature. 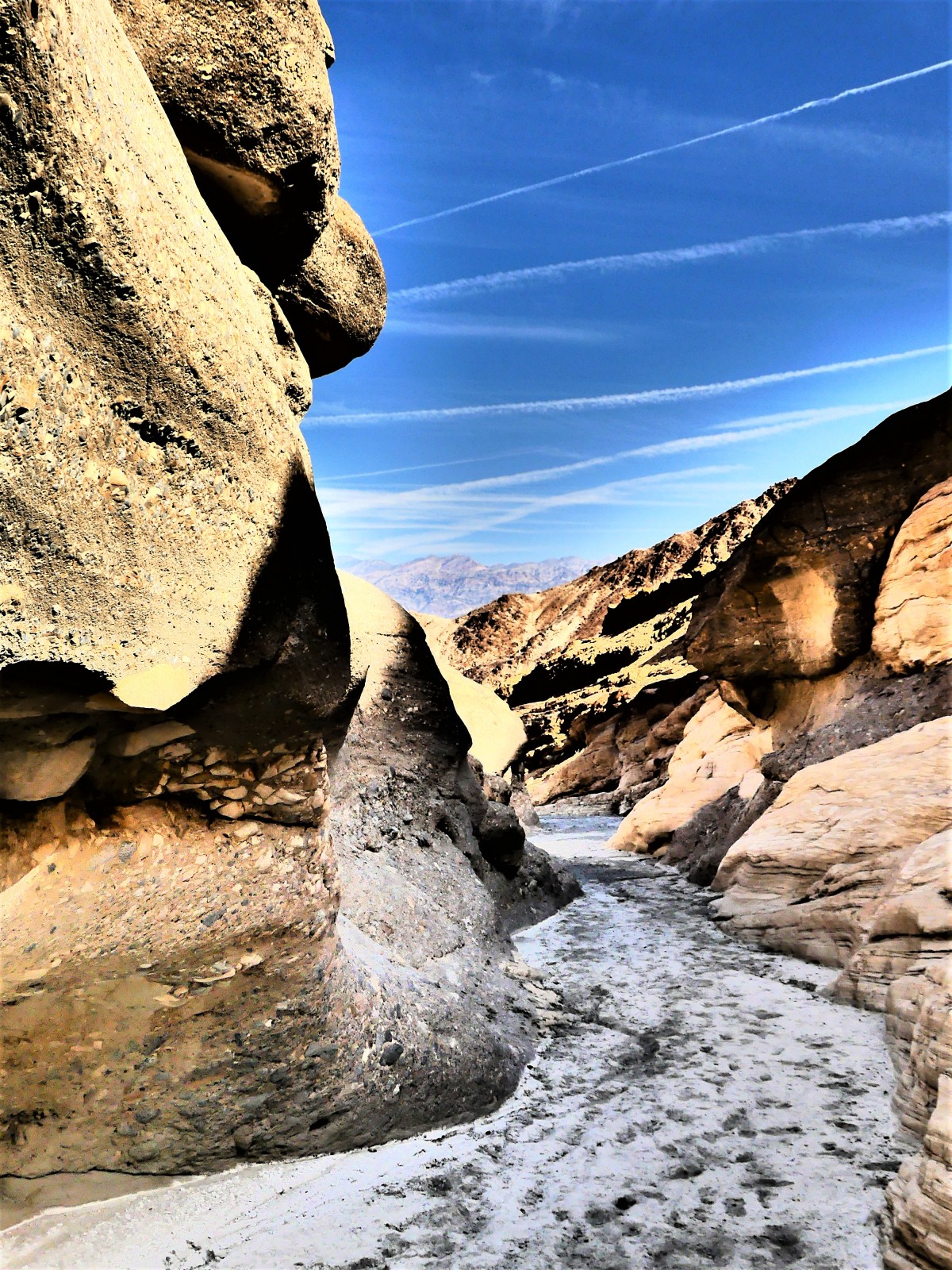 …and we hiked until we reached the foothills of the Panamint Range. It was a worthy addition to yesterday’s collection of geologic gems.

From there, we took the historic high road through Emigrant Pass, and back to a time of survival–when pioneers and prospectors competed against all that nature could muster. But nothing could dissuade or discourage the hardscrabble men and women with ardent dispositions, and the promise of a gold strike.

Today, the desert is littered with claims. In fact, there are more abandoned mines in Death Valley than any other national park. But one mine is special, and it belonged to Pete Aquereberry.

He gained control of the claim after winning his 1907 lawsuit against Shorty Harris, an entrepreneur, a raconteur, and bona fide con-artist, who later built a castle at the top of the valley and filled it with museum-worthy art.

When all the other mines and miners faded away, Pete continued to pull gold from the ground for forty years,

and refined it through his cashier mill.

Fortunes were made and lost in turn-of-the-century boomtowns like Skidoo, Ryolite, Leadfield, Ballarat, but Harrisburg was different. Pete continued to live in his ramshackle cabin until his death in 1945. 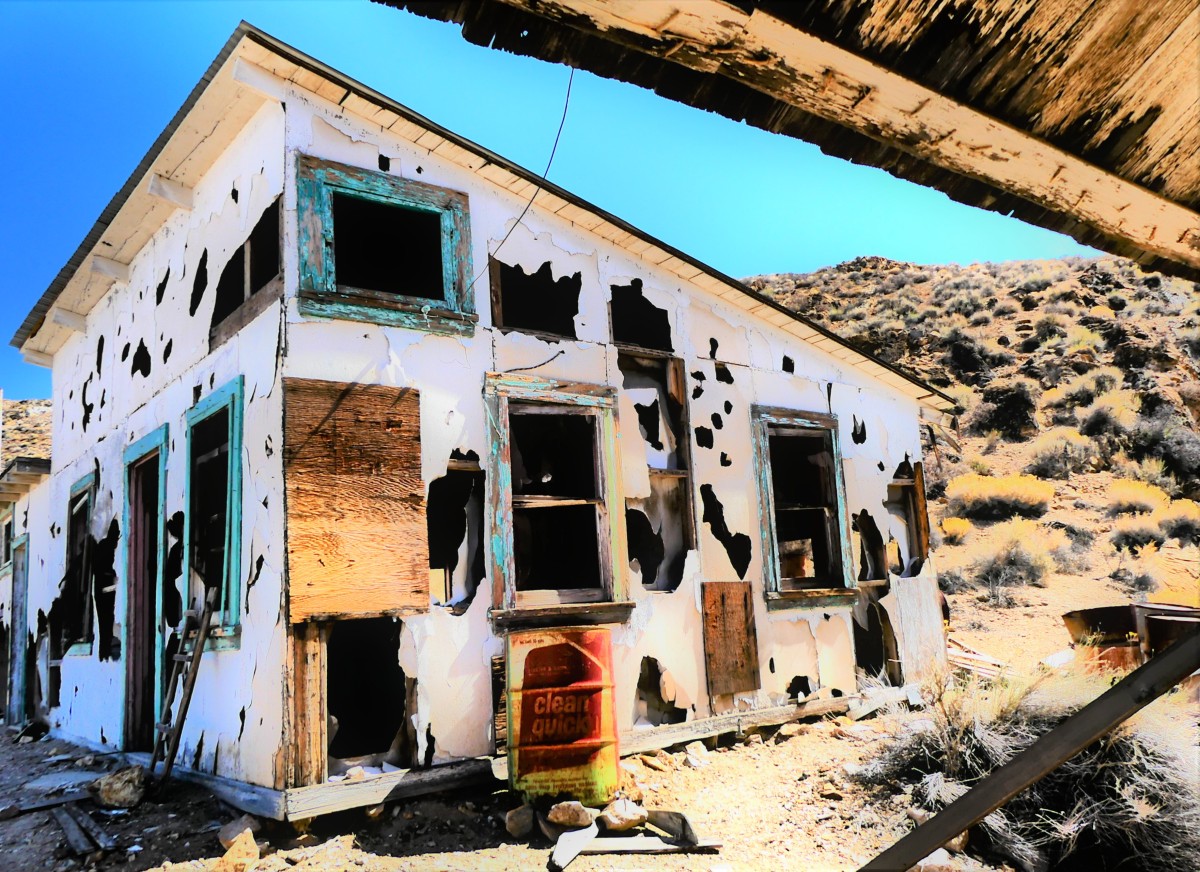 Two-hundred yards up the hill, an overgrown path leads to a graveyard of rusted appliances, oil drums,

and a bullet-riddled 1948 Buick Roadmaster, an elite automobile at the time of post-war production…

…that sits abandoned in the middle of Nowhere, Nevada…

and without a reason or a clue of ownership.

However, beyond the mining camp, and up a primitive road at 6433 ft. above the valley floor lies Aguereberry’s everlasting “Great View”,

better known today as Aguereberry Point, where the air temperature soared to 70° F. Even better was having the mountaintop to ourselves, 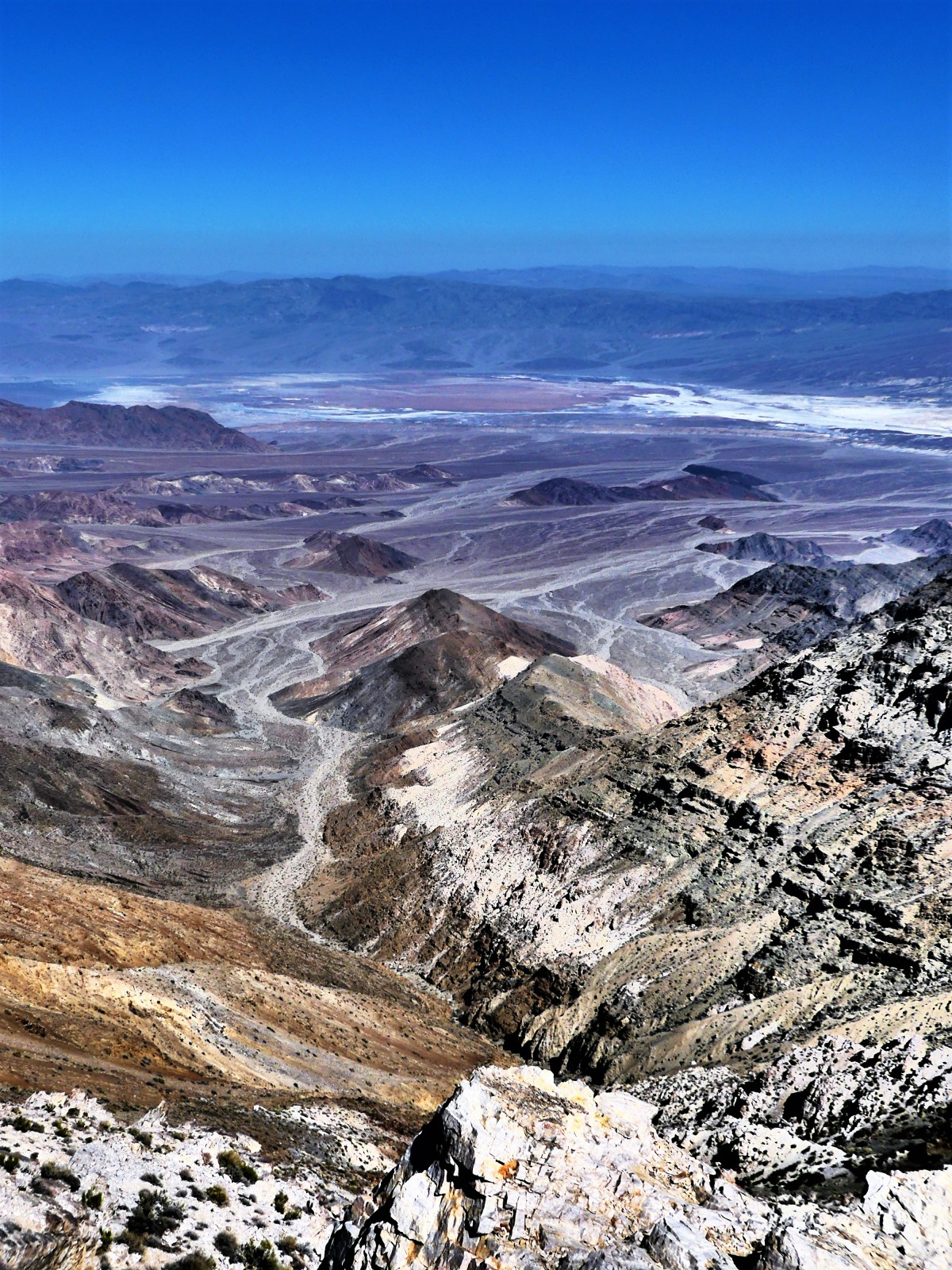 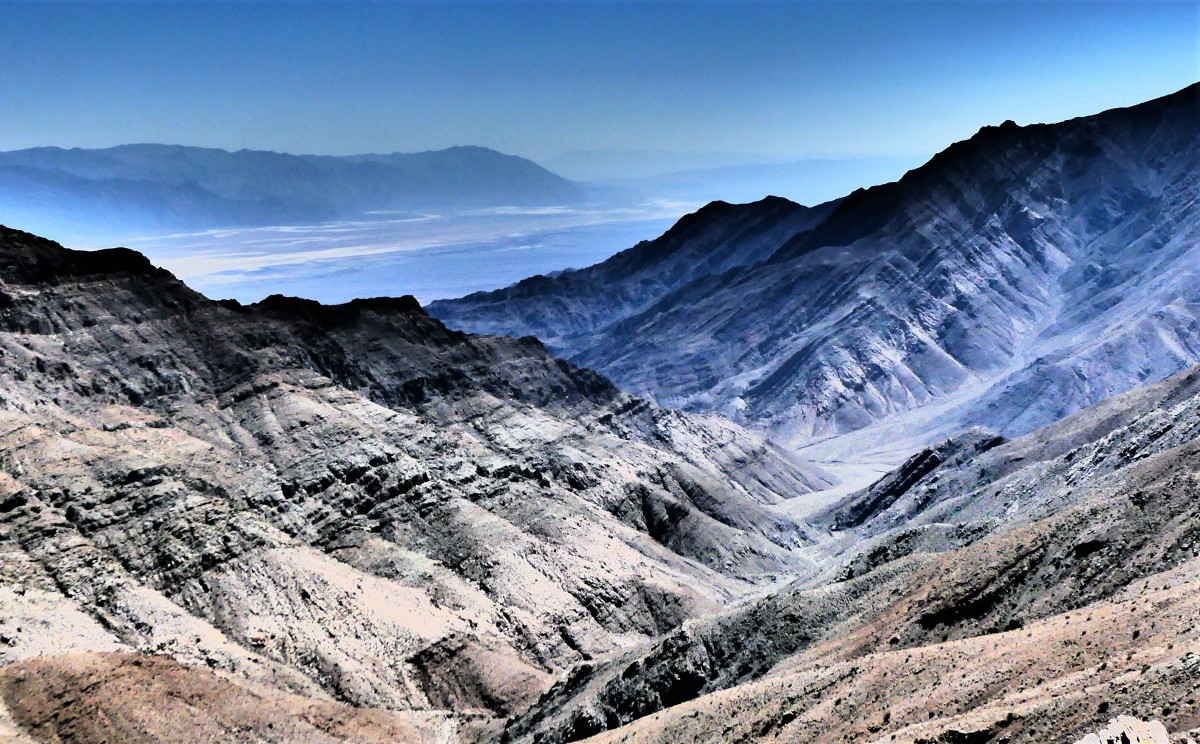 until a team of law enforcement rangers unexpectedly crashed our party. After chatting awhile, we took our cue and continued in search of the Charcoal Kilns without really knowing what to look for.

Turning east on Wildrose Canyon Drive, we followed the road until pavement turned to gravel, and eventually narrowed to passable traffic. One moment we were driving through high desert, and when we turned the corner, we found ourselves inside a lush forest of piñon pines, as if we’d been transported to another part of the country.

The air was crisp and smelled of sage. Dead ahead was a string of ten identical bee hives–making for a very different kind of Rockettes chorus line.

That’s when Leah and I realized that we’d found the kilns. 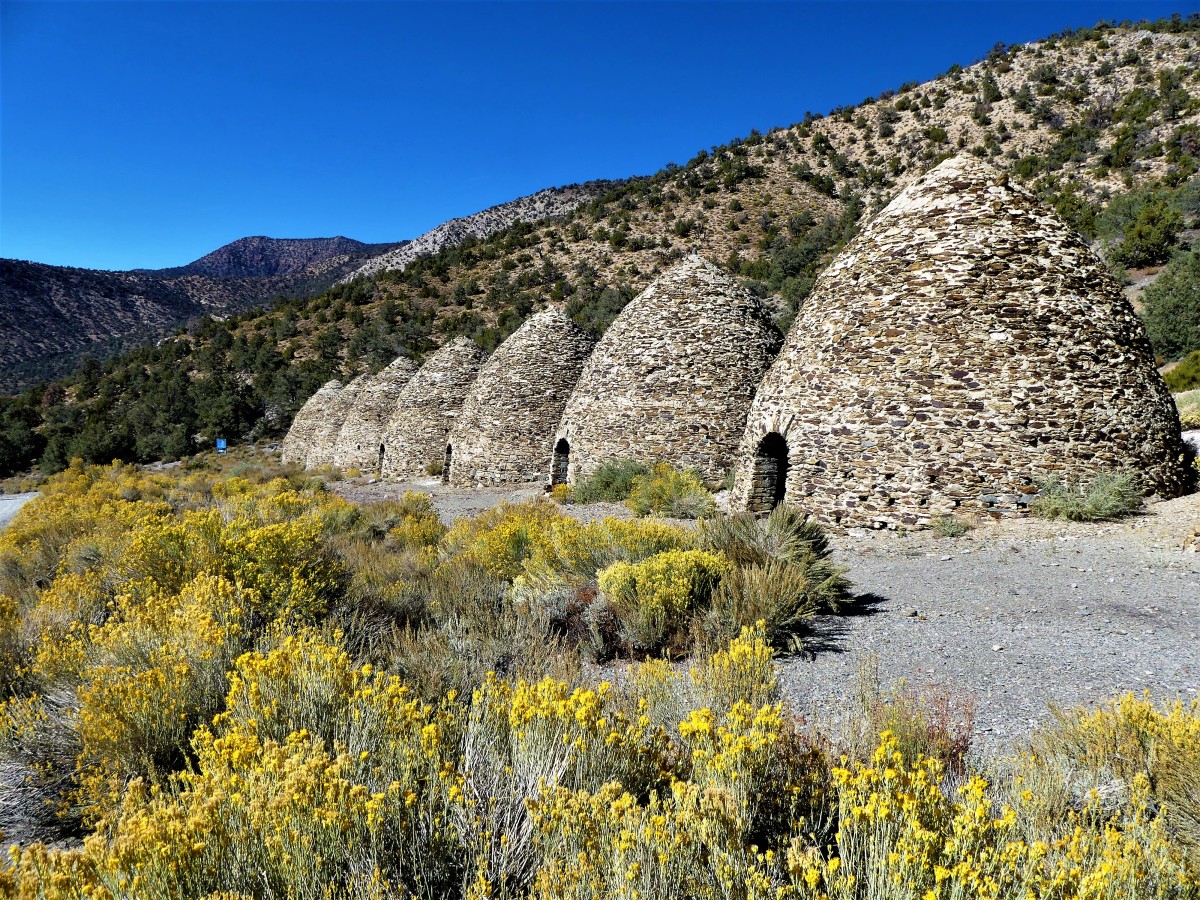 Quarried from the mountainside, these imposing structures built in 1877–and used for only three years–still have the stink of creosote permeated within their stone walls. The cones are perfectly symmetrical, and the inside acoustics sound amazing.

Our trip continued past the kilns and up a high-clearance mogul run that was barely one-way-wide. Just then, an Accord barreled down and around a craggy corner faster than anyone should, and came to a skidding stop at the sight of me. It seems we were now engaged in a friendly game of chicken, so I made the first move and crept up the mountain in his direction. Perhaps he presumed that I was pulling off the road to give him a chance to pass, but there was less than no room for him to clear me. He was beaten, and he knew it, as he backed his Honda into a clearing, allowing me to pass. We exchanged fleeting glances, and I realized that winning right-of-way was more of a victory for the truck.

The road topped out at Mahogany Flat, where a lone camper was listening to Ruby Tuesday on his personal speaker, and a middle-aged couple had just completed their hike to Telescope Peak–a fourteen-mile round-trip to the highest peak in the park at 11049 ft.

While our hearts were willing, we were in no condition to start such a big hike so late in the day. But with assurances of great views from two senior hiking superstars, we walked for a mile until we reached the first clearing. While it was good enough for Leah, I wanted more. Leah stayed back while I continued to the second clearing, no more than another ¼-mile ahead.

And that’s when I finally understood the park.

Leah and I had visited Death Valley seven years ago, and had a completely different experience. For one, it was February, and it felt like we had the entire park to ourselves. The other oddity was when it rained; it brought a sudden eruption of wildflowers to the desert, and turned the Basin into briny ponds of unusual colors and strange lifeforms.

This time around, we elected to pass on the Twenty Mule Team Borax exhibit, having seen it years ago, but it came up again in a strange conversation on our way down from Telescope Peak. For several miles, we’d been passing scattered piles of shit along the road, and wondered about its origin.

Until we had to stop the truck.

And then we knew what had become of the Twenty Mule Team. 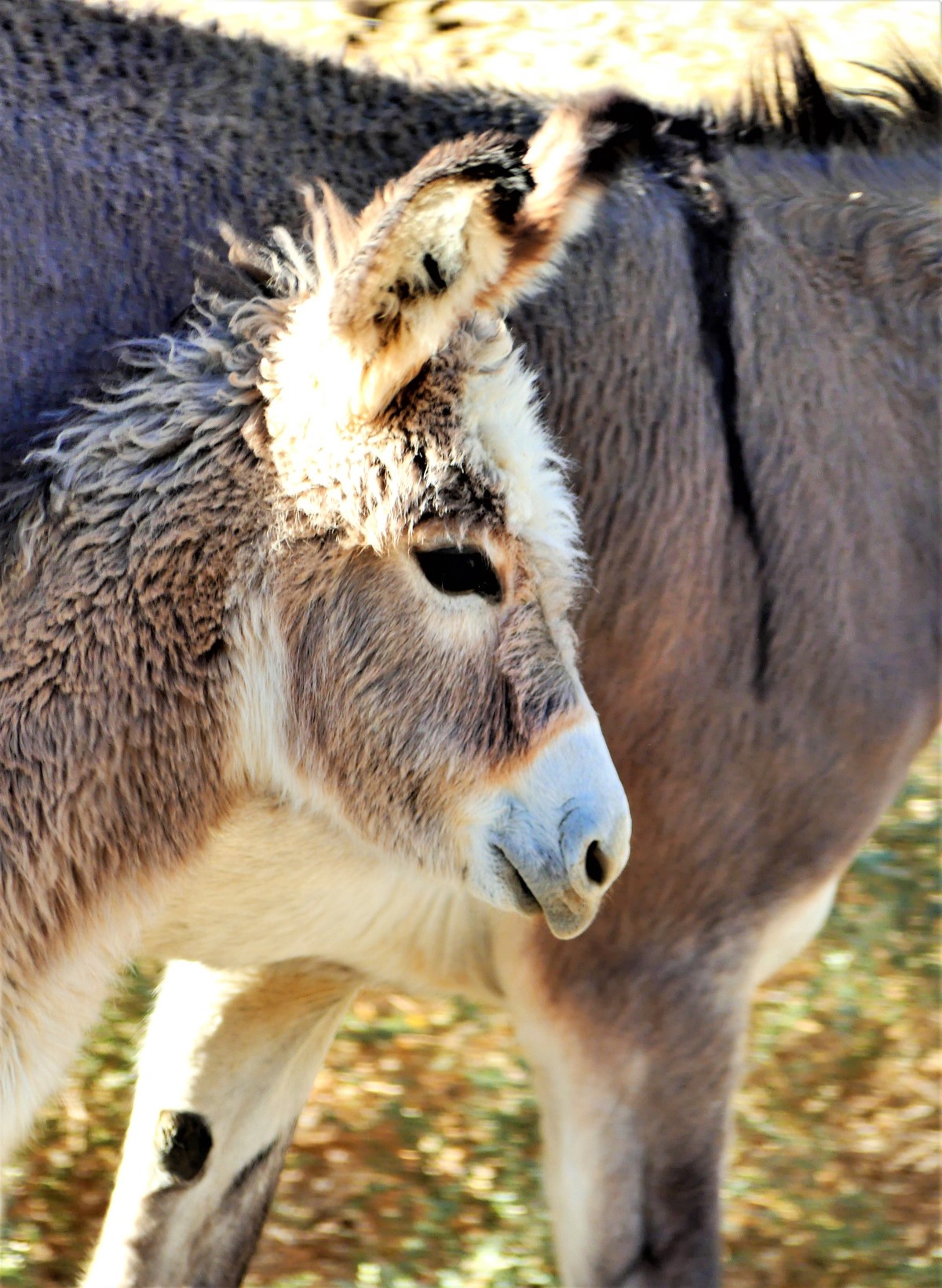