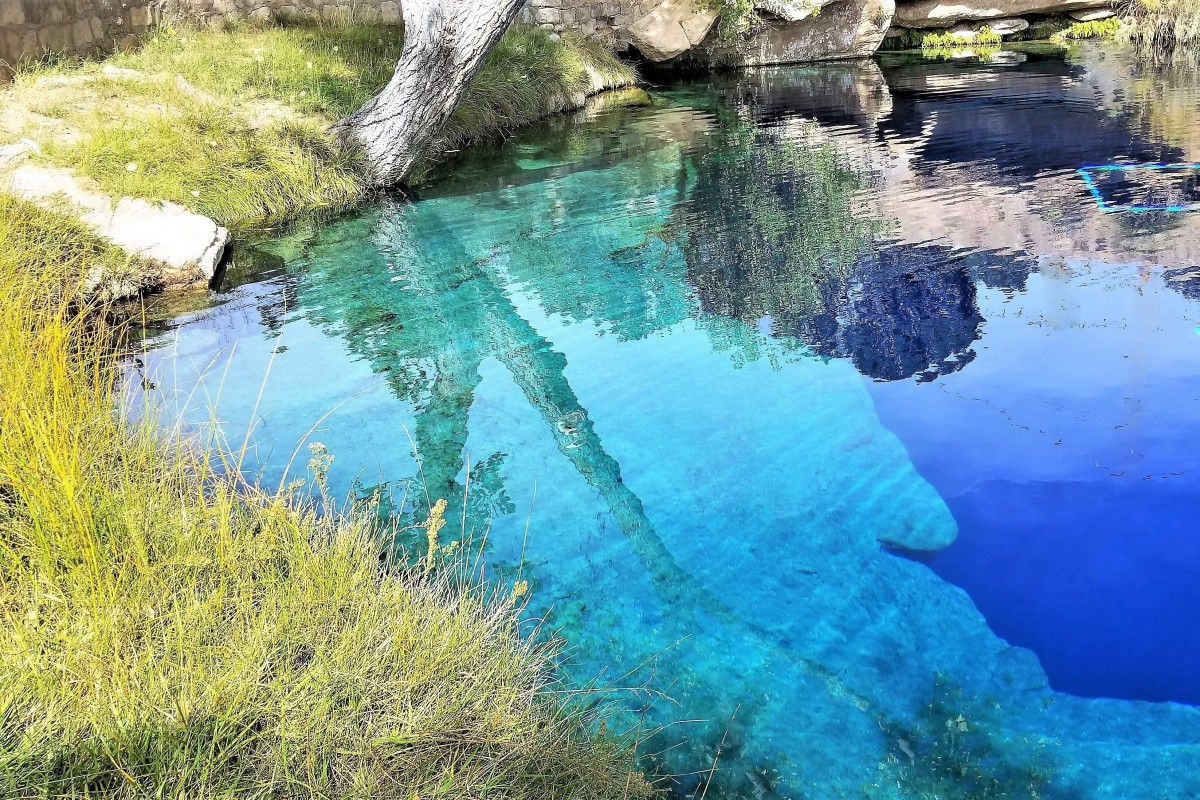 With Amarillo behind us, we were finally on our way to Albuquerque to visit Leah’s family. Earlier in the week, Leah had made preliminary plans with Carrie, her daughter to take the grandkids to Santa Rosa, NM to visit a popular water park the day after our arrival.

But not so fast!

We were driving on I-40 West with very light traffic, and had just crossed the border into New Mexico when a couple in a pickup pulled along side me and grabbed my attention. The woman in the passenger seat looked concerned. She mimed a circle with her finger while shaking her head, and pointed in the general direction of our Airstream before the pickup sped away.

“What do you mean, trouble?’ Leah asked.

“I don’t think she was playing Charades…hopefully nothing serious” I answered.

I slowed to a crawl–pulling off the road to inspect our rig.

The original set of Goodyear Marathons looked nearly new upon general inspection, and I‘d only pulled the Airstream about 5,000 miles since starting out on our Great American Road Trip. Thank goodness for tandem axles. As for the blown tire, the tread was gone and the cord plies were shredded, but miraculously, the wheel and wheel well were still intact.

“We need a new tire,” I sighed. “The one that used to be there looks like spaghetti.”

“So now what? We’re in the middle of Bumfuck,” she panicked.

“Not exactly,” I tried to reassure.

“And on a Sunday to boot!” she continued.

“You’re not helping,” I advised.

Analyzing our location on GPS, I responded, “It’s showing that we passed a truck stop the moment we crossed the border.”

I called Russell’s Tire Center and learned that Cole was on-call. He agreed to meet us at the shop in half an hour. He also advised that he would be charging his travel time back to me at $95/hr. in addition to the emergency repair at $95/hr. It was a different kind of highway robbery, but I was out of options since I lacked the tools to lift a 7500 lb. trailer.

“There! It’s arranged,” I crowed. “We just need to get to the next exit and head back.”

“How are we gonna do that without a tire, genius?” she asked.

“Slowly and carefully,” I suggested.

It seemed like forever, but we limped along at 20 mph with flashers flashing until we approached the next westbound exit. Ironically, Jennifer (our GPS voice) routed our return along Route 66–parallel to I-40 West–as if she knew that slow-going was ill-suited for Interstate travel.

We got to Russell’s first and waited for nearly an hour when Cole arrived. He got straight to work. With the wheel off, I discovered what became of the tread. Luckily, no harm was done to the shock or the brake system.

Feeling insecure about using the spare under the Airstream, I opted for a new tire. When all the dust had settled, we were finally on our way to Albuquerque after a 2-hour layover and $300 in expenses. But I was feeling weary from the incident and wary behind the wheel, knowing that the other tires needed to be replaced.

90 minutes of drivetime took us to Santa Rosa, NM.

“Wait a minute! Aren’t we scheduled to drive here tomorrow with Carrie and the kids?” I asked.

“But we’re already here. Why on earth should I drive another 90 minutes to Albuquerque, only to return here the next day with your family,” I reasoned. “Why can’t they meet us here instead? They could even camp with us tonight if they want. Besides, I’m exhausted from this expensive mini-adventure.”

“Not a bad idea, Einstein,” she quipped.

Good News! Google confirmed that 2 walk-in sites with services were still available at Santa Rosa Lake State Park. Jennifer navigated us to the park campground, where we looped around twice to locate the open sites as advertised. Turns out, one site was handicap reserved; the other site was reserved for camp host.

As with most self-help campgrounds, Leah put our payment in an envelope and dropped it into a paybox at the entrance kiosk. After plugging into the host site, it was a relief to finally kick back with a cold beer and a blast of A/C to melt my stress level.

But not so fast!

Two park rangers have approached Leah, and it didn’t go well. We have been evicted, unapologetically.

So we rolled back onto Route 66 and found an overnight spot at a local RV park. Leah made arrangements with Carrie, who eventually drove to meet us and spend the night car camping with Devin and Gabe outside our Airstream window.

The next day, we drove to the Blue Hole—

When we arrived, I had this nagging feeling of déjà vu.

“We’ve been here before,” I mentioned to Leah.

“I would have remembered this place,” she disagreed.

“I’m telling you, this place is very familiar to me,” I insisted.

“Maybe you were here with someone else,” she theorized.

“Nope! You were with me, and I can prove it,” I stated emphatically.

I scrolled through the picture gallery on my phone, as if by chance…until…

“We never went in the water,” I said, “But that’s about to change today.”

It took some coaxing, but eventually everyone braved the 61o F temperature…

except me. I was going for the whole enchilada.

I watched as several youngsters scrambled to the ledge 20 feet above the Blue Hole and jumped,

which was all the preparation I needed for my jump.

The water was freezing–enough to take my breath away. But at least I left with bragging rights.

P.S. After we reached Albuquerque, our Airstream got a new set of shoes…

and they fit just fine.