Our appetite for fine art took us to Milwaukee Art Museum with its collection of 25,000 works on display–making it one of the nation’s largest galleries. While I was curious about the collection, I was most interested in the Quadracci Pavilion, built by Spanish architect Santiago Calatrava in 2001. 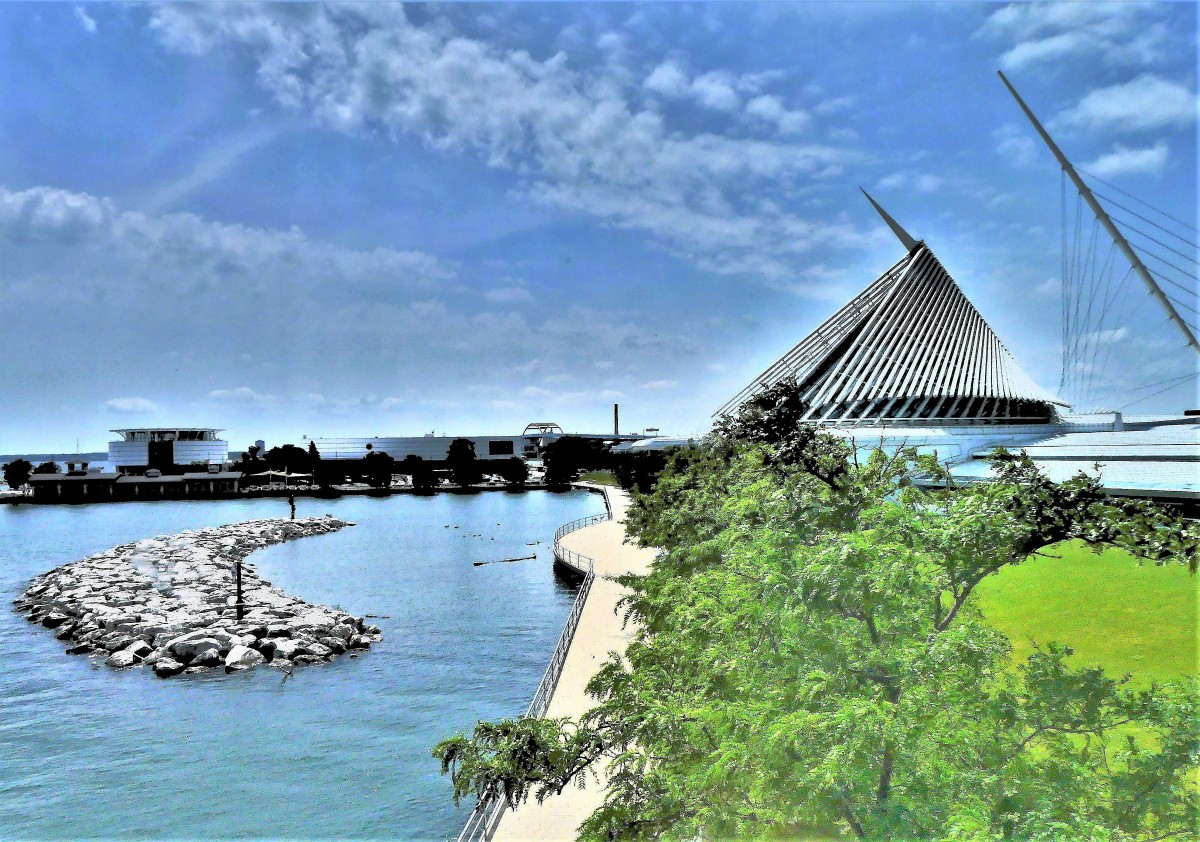 to the point that Milkwaukee now incorporates Calatrava’s  brise soleil in it logo. 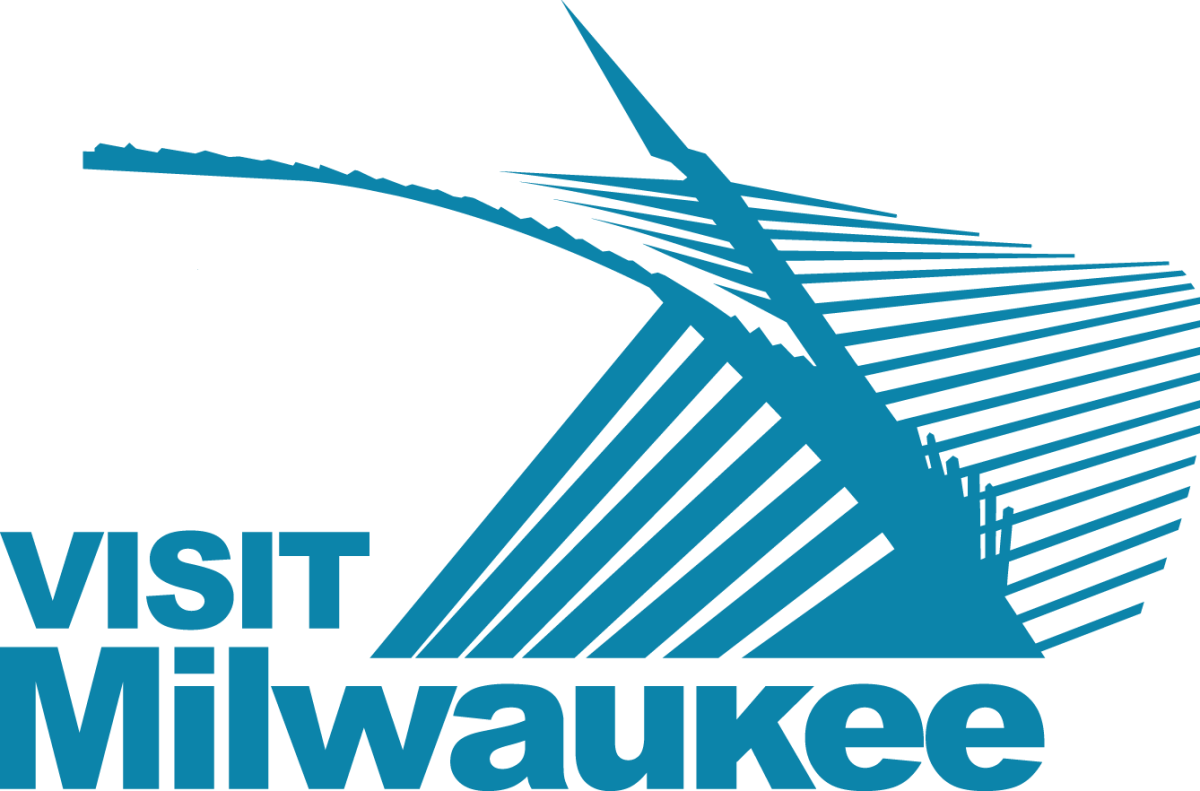 Parallels to Calatrava’s Oculus at NYC–Gound Zero are unmistakable;

The wings are extended most days until sunset, but stay retracted during nasty weather or high winds. 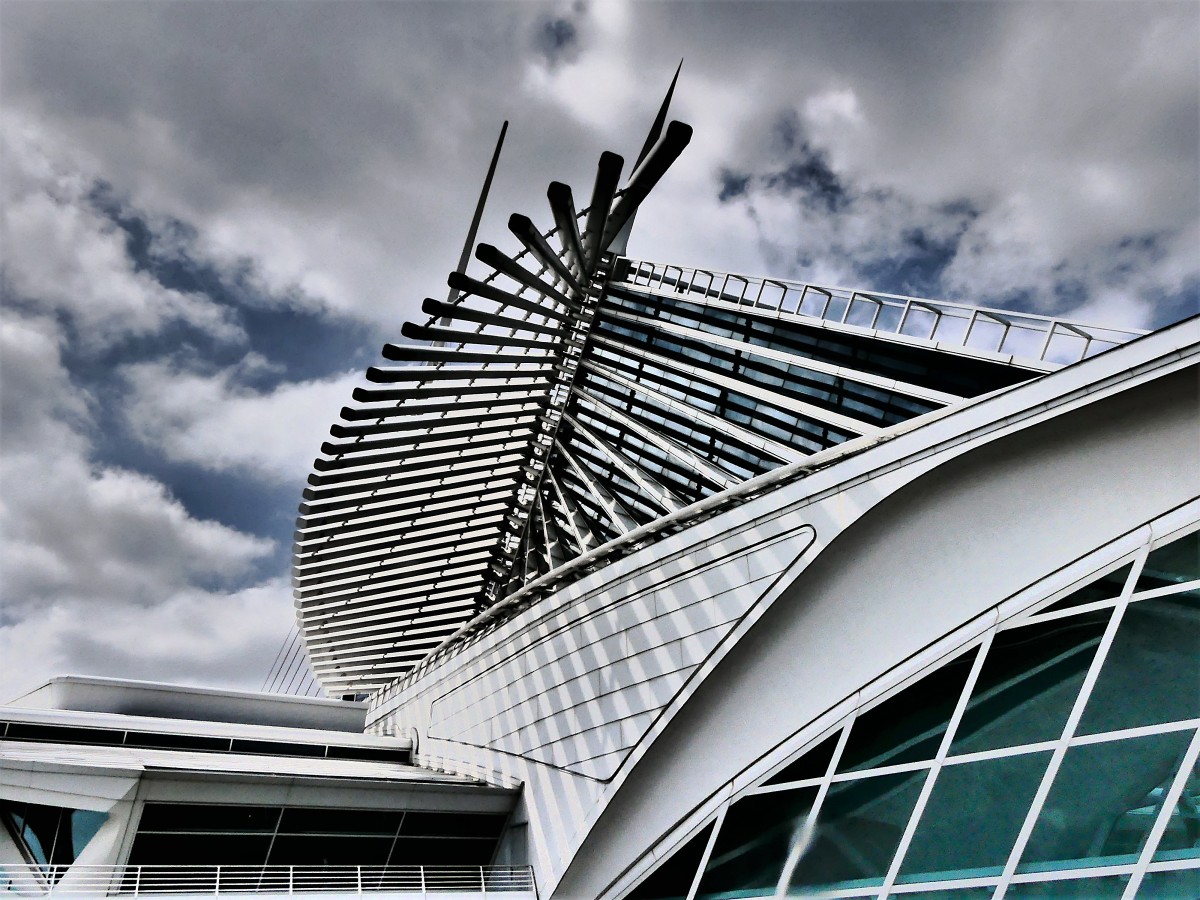 Sadly, Leah and I were greeted with high winds, but we were fortunate to tour the museum with so few visitors.

With the exception of a group of mini-pals,

we felt like we had the space to ourselves– 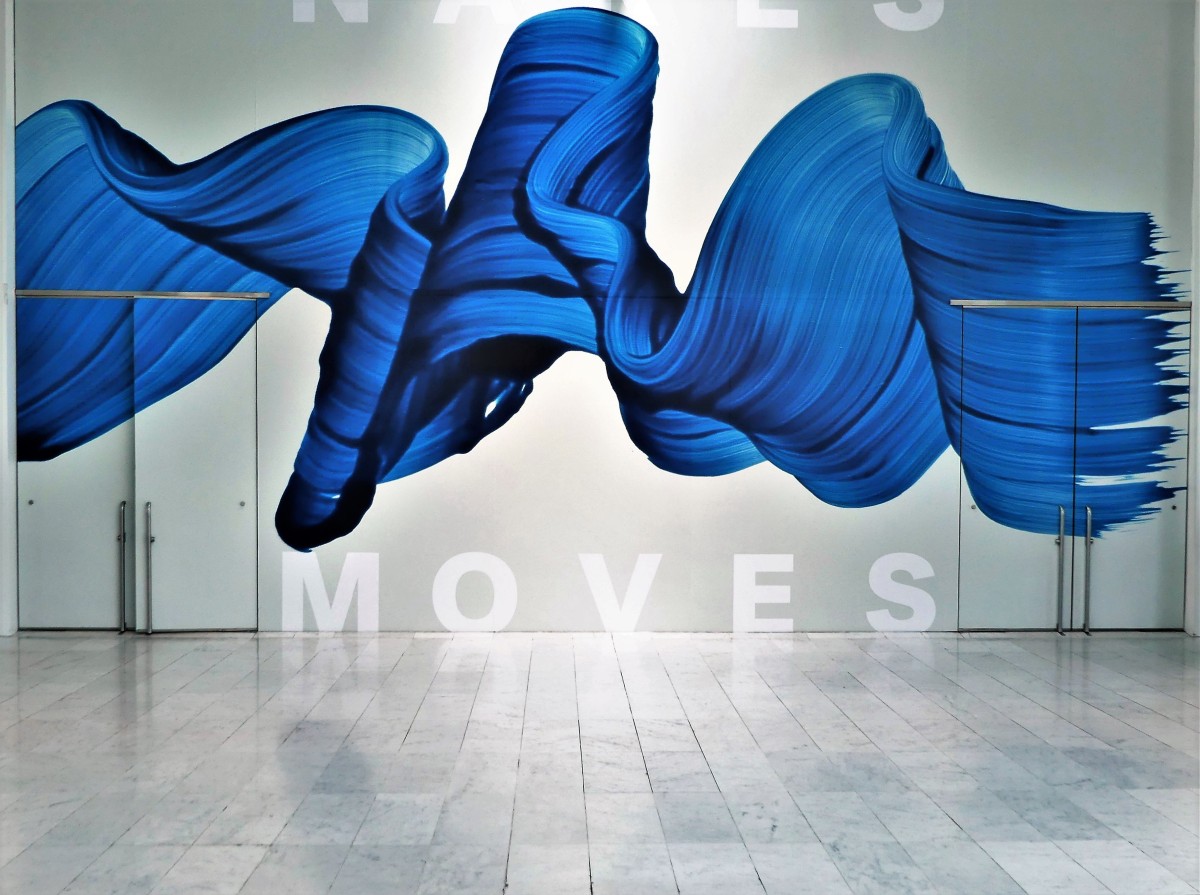 which gave us more time to study some of the special artwork in greater detail without distraction or interruption: 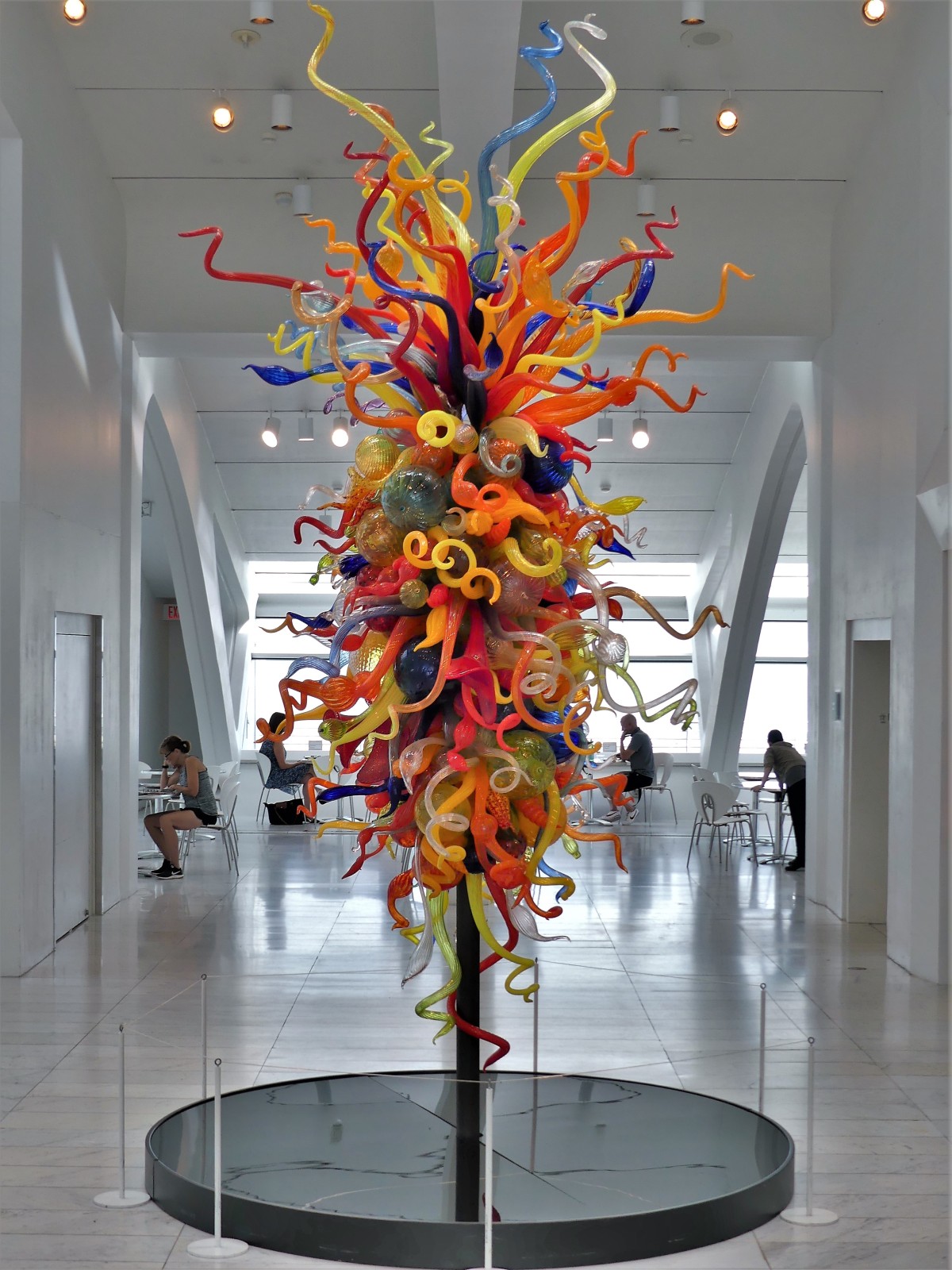 (quickly scroll up and down for cool moiré effect)

While I never considered that the building was competing with the exhibitions, I was always eager to return to Calatrava’s public spaces…

to cleanse my palette before indulging in another bite of brain food!

We had come to Milwaukee to drink some beer, eat some cheese curds and absorb some culture, and Milwaukee didn’t disappoint us.

Once home to the Big Four: Miller; Pabst; Shlitz and Blatz–Milwaukee was considered the brewing capital of the nation during much of the 20th century. However, after sell-off and consolidation, only MillerCoors remains as Milwaukee’s master brewer.

Nevertheless, there are plenty of reminders of the good ol’ days scattered around town…

For instance, on W. Wisconsin Avenue sits the Pabst Mansion.

In 2015, Pabst returned to the city with a scaled-down version of itself, manufacturing only craft beers, like many of its competitors in the region.

Likewise, the Schlitz Brewery has been converted into an office park.

But a new generation of brewers is doubling down on craft beers, with special attention going to Lakefront Brewery for its laid-back vibe and its innovative spirit, which instilled brothers Russ and Jim Klisch to brew Doors County cherry beer and the nation’s first gluten-free beer.

Leah and I sat in the Beer Hall noshing on fish tacos and award-winning cheese curds while waiting for the brewery’s 4 pm tour.

Eleven bucks buys an 8 oz. plastic cup and four wooden tokens good for four pours from start to finish of the humorous, 45-minute tour–very different from other tours I’ve taken (see Supreme Ruler of Beers and Eco-Beer), where beer sampling follows the tour as a time reward. 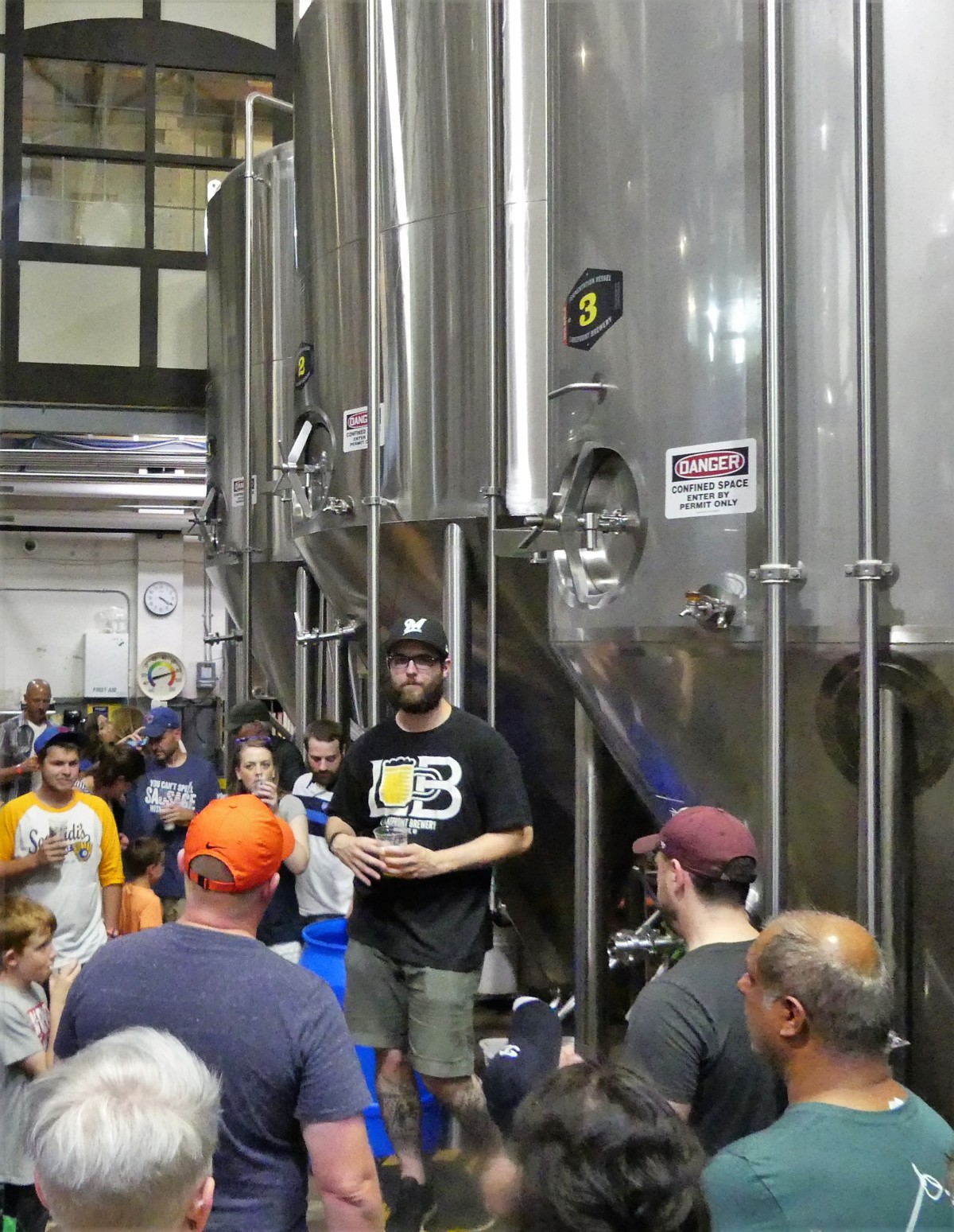 At the conclusion of the tour, we gathered around the bottle conveyor, 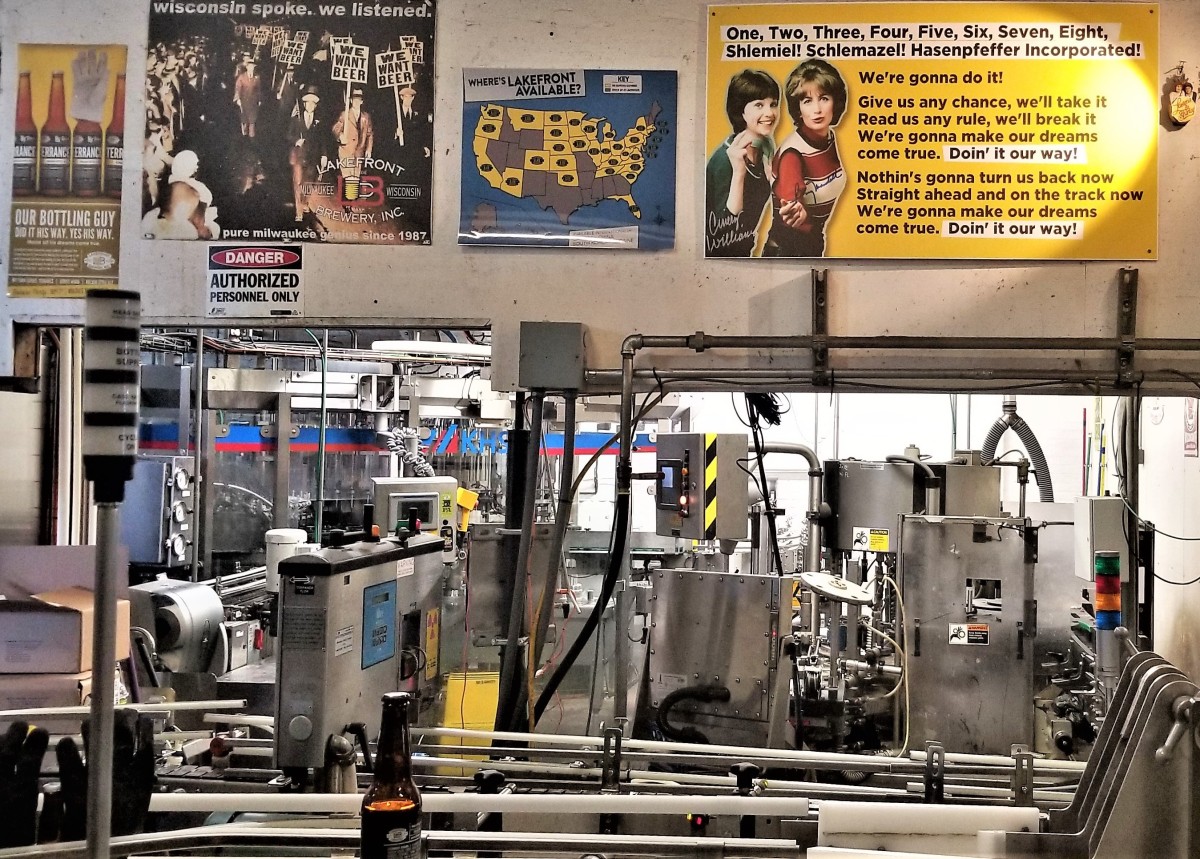 Additionally, the plastic cup can be exchanged for a free beer glass at the gift shop. 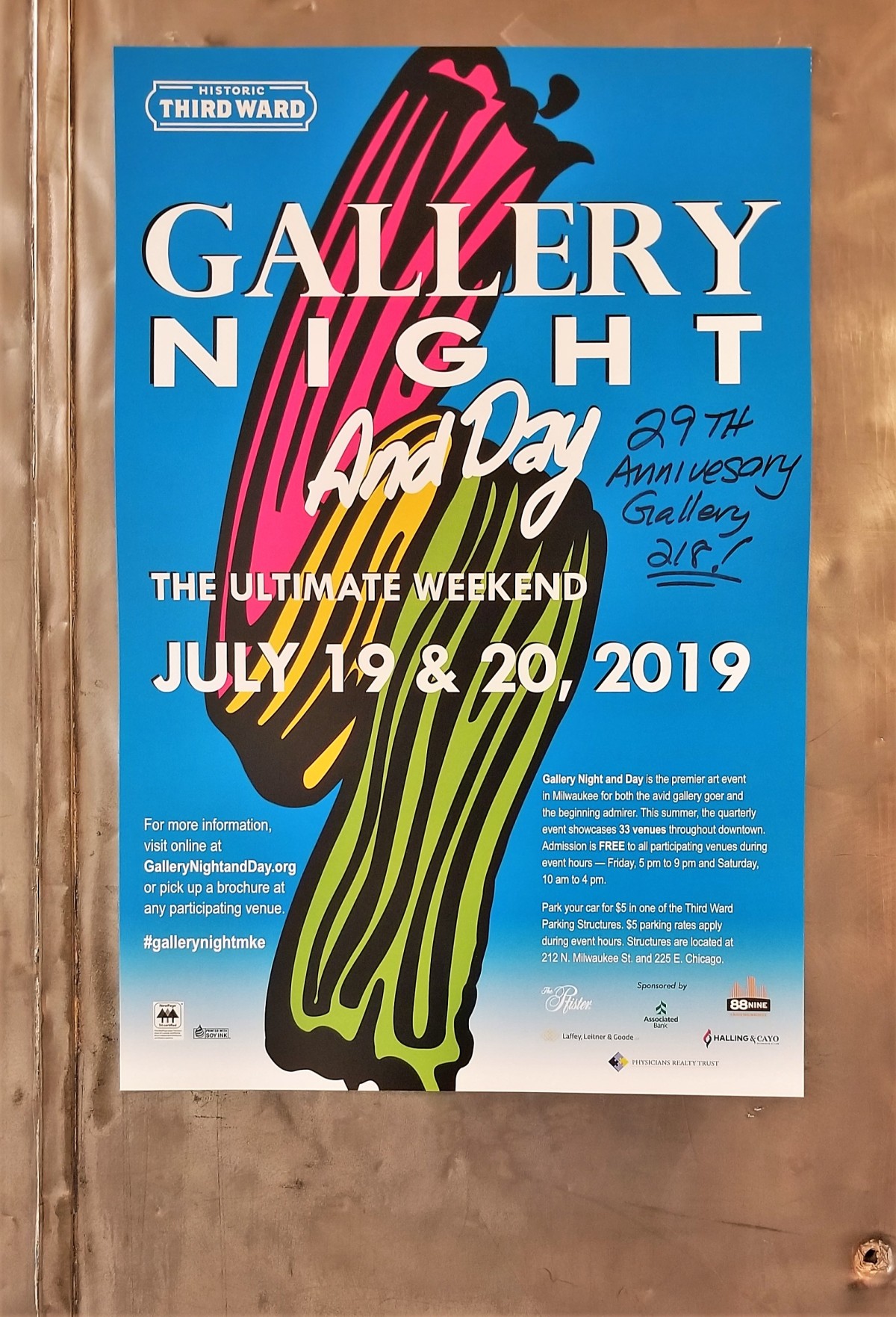 but drinking beer interfered with our plan, so it would have to wait until Gallery Day.

The following day we drove to the Historic Third Ward, and roamed through six floors of the Marshall Building inspecting a variety of syles and mediums of different artists.

Unfortunately, the clouds rolled in and it rained like there was no tomorrow. We waited out the deluge at a nearby Shake Shack until a break in the weather, and crossed over to Walker’s Point to satisfy our random craving for novelty, humor, and are you kidding me? 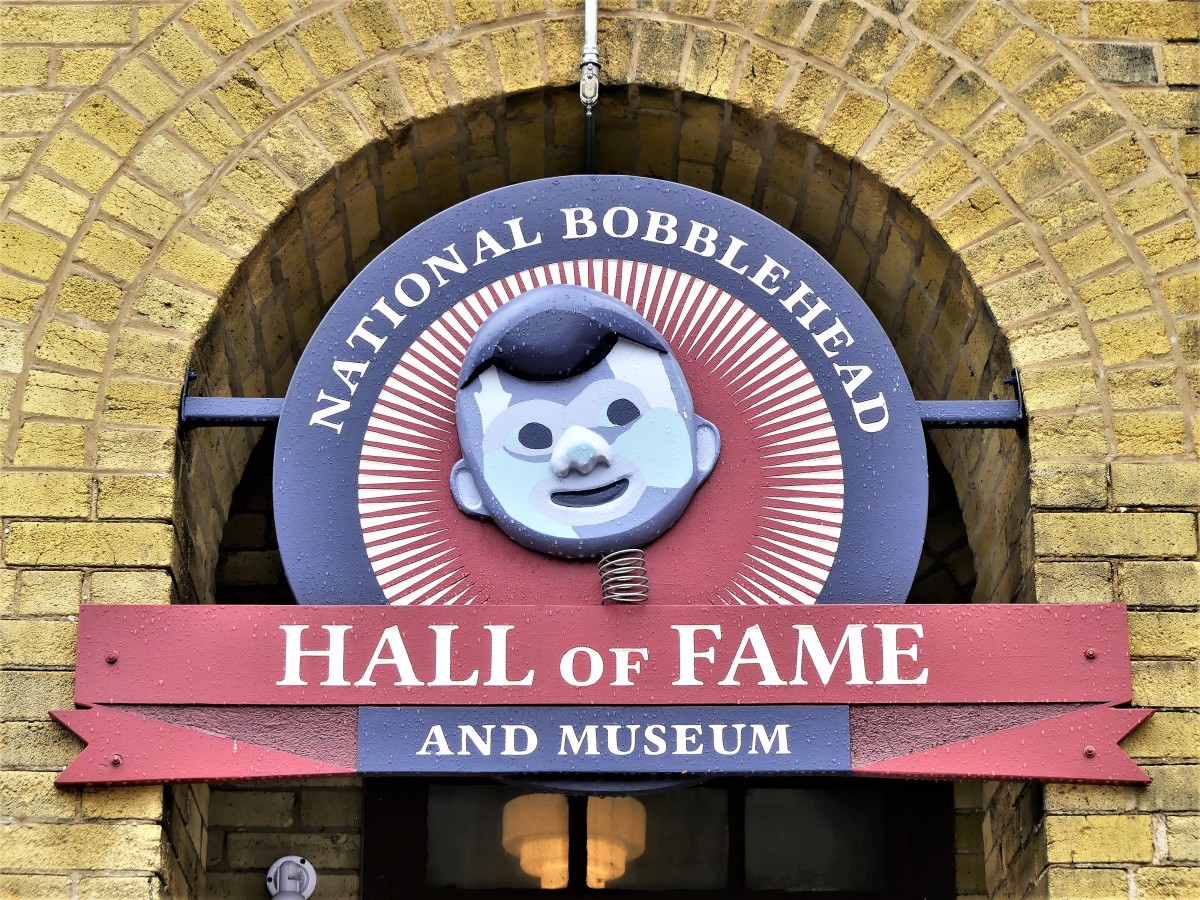 As of February 2019, there’s a new museum in town, and it’s head and shoulders above the rest. It’s also a nerdatorium for dads…

The National Bobblehead Hall of Fame and Museum definitely checks the excess box with a collection of 6,500 figurines on display, covering a wide swath of popular culture, 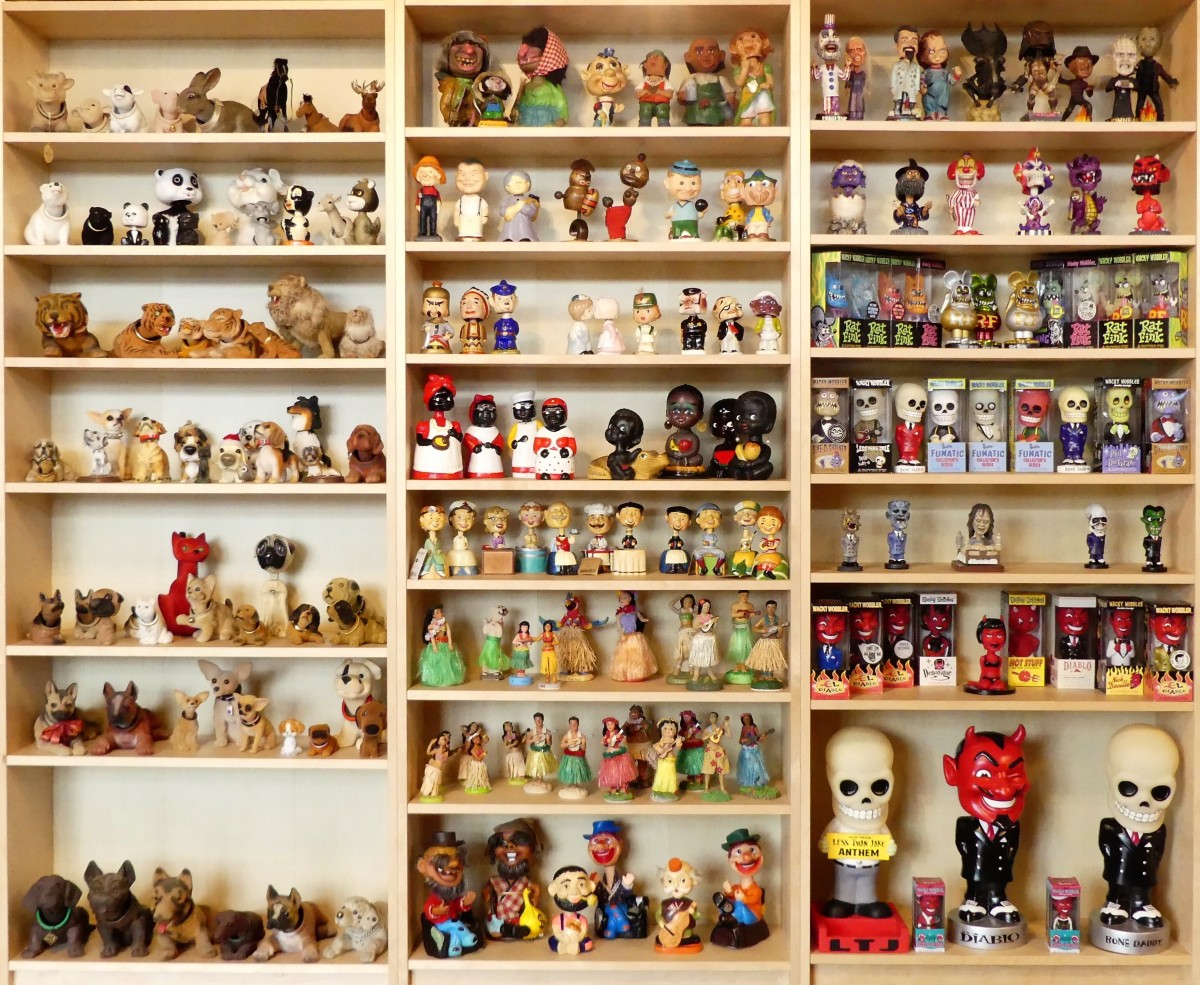 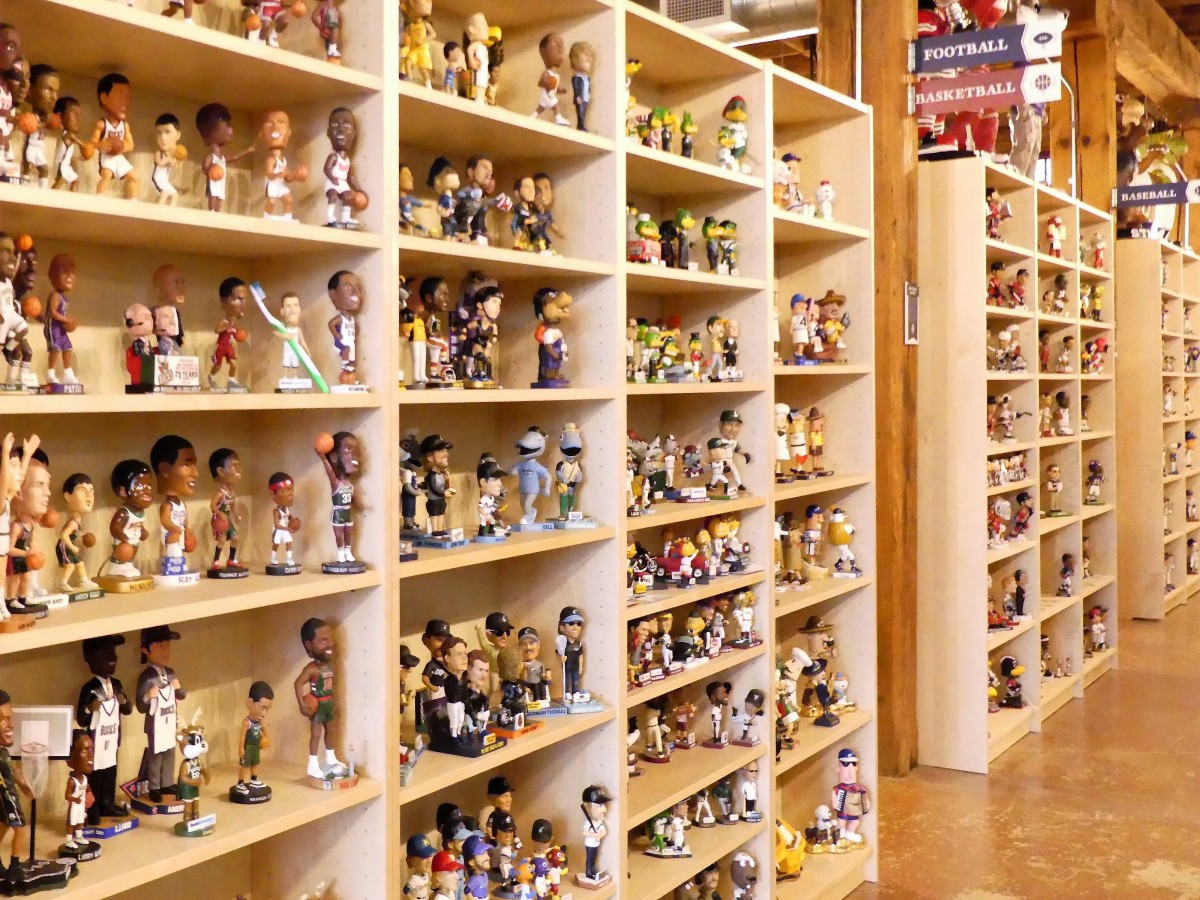 The Hall of Fame Bobbleheads line the windowsills. 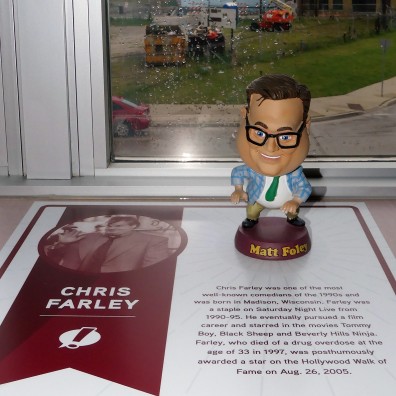 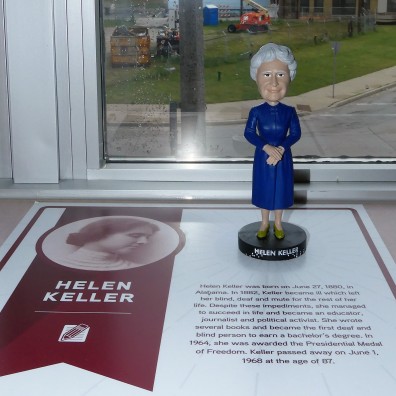 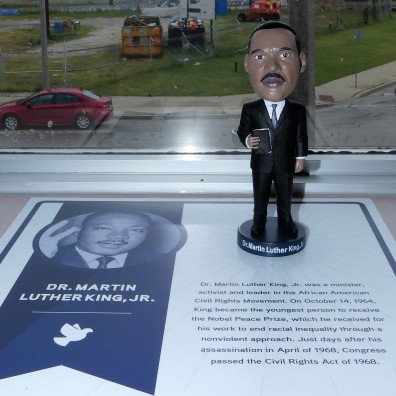 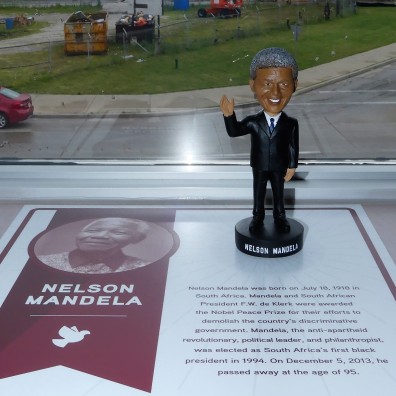 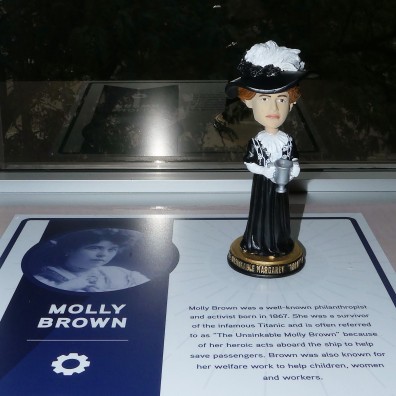 Shaking my head in disbelief, I asked myself, “Why?”…and patiently waited for a sign to give me guidance!

For the overly curious, the bobblehead production process is explained step by step…

There’s little doubt that I’ll be raising a glass or two of Lakefront’s Riverwest Stein Amber Lager every January 7 to celebrate.