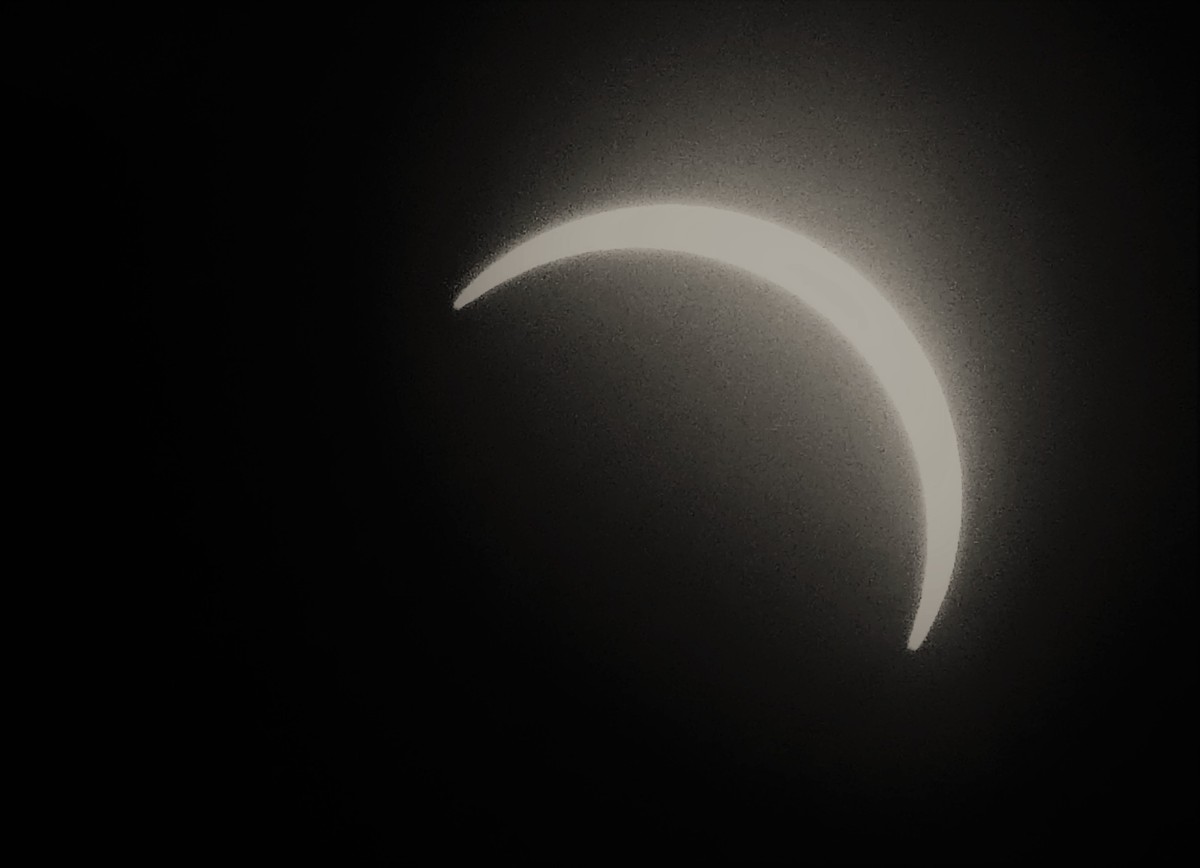 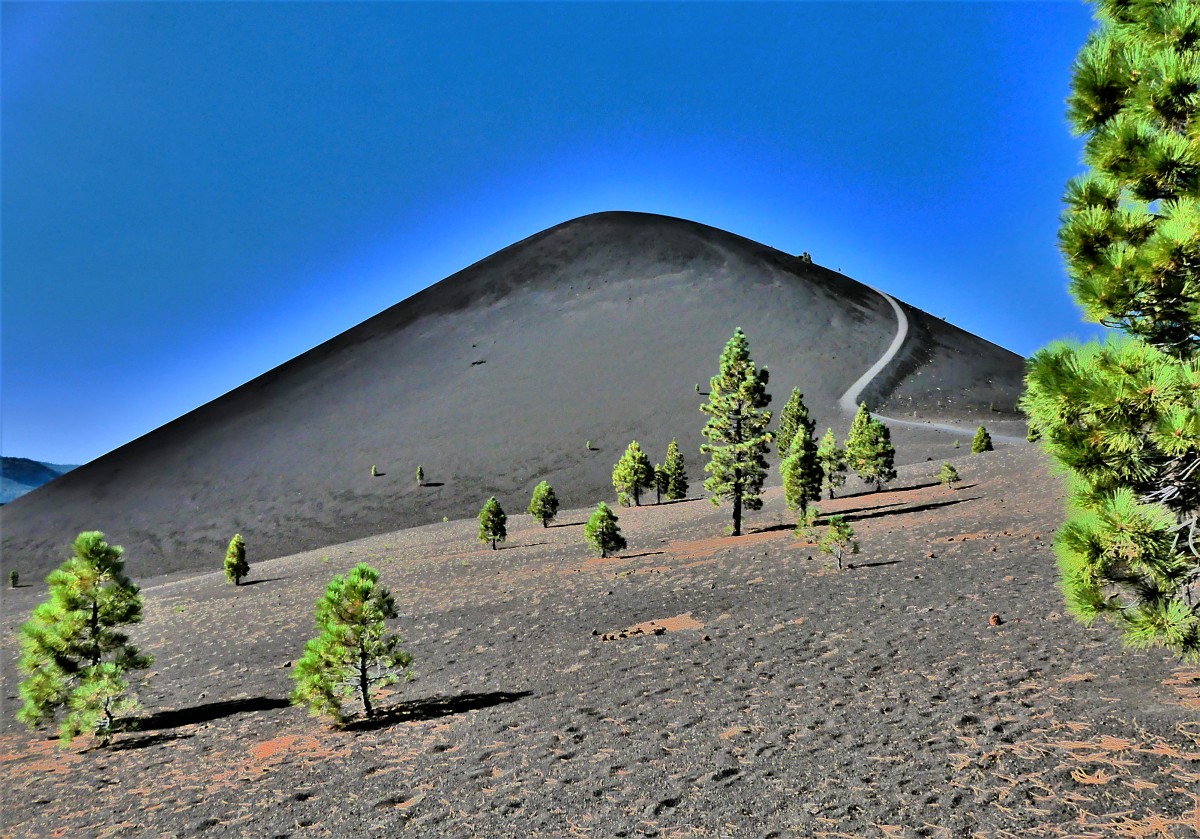 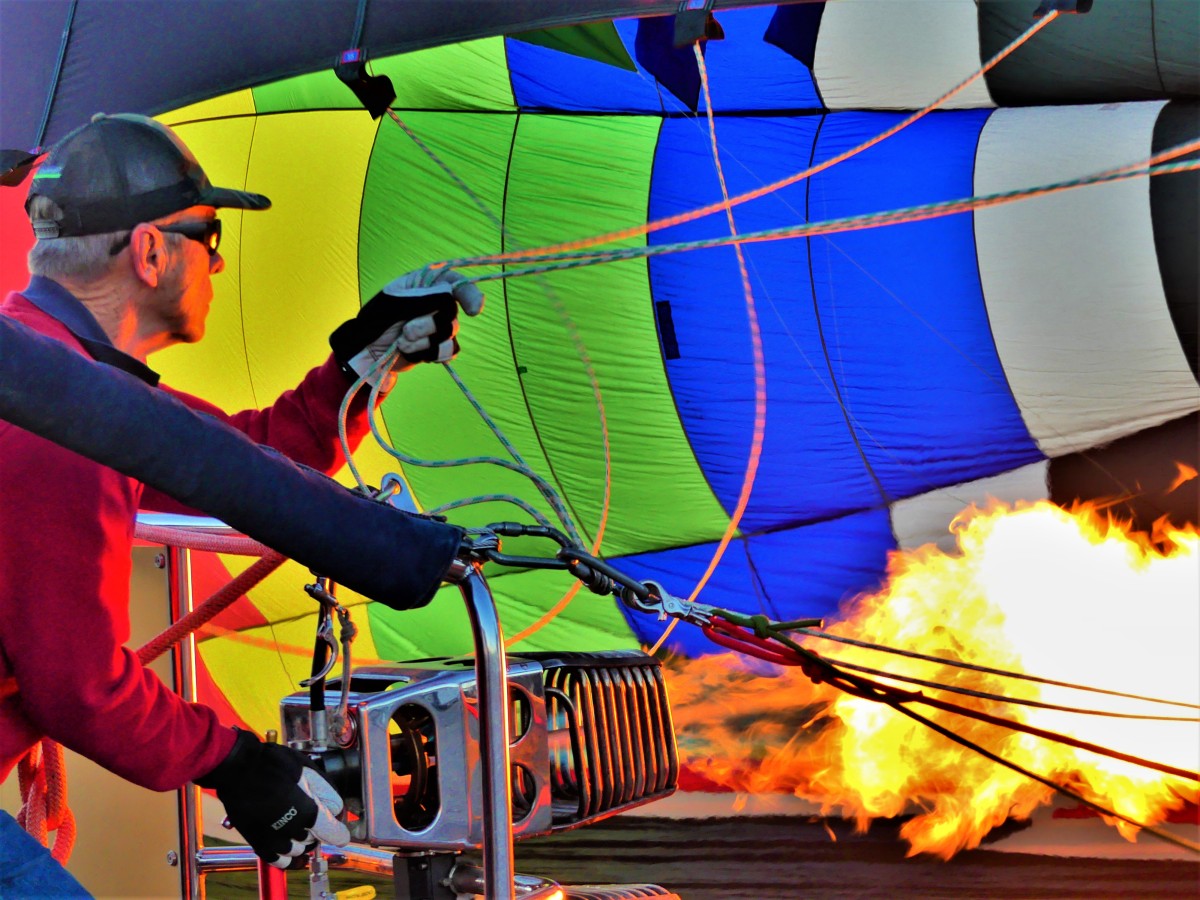 Clouds to the right of us… 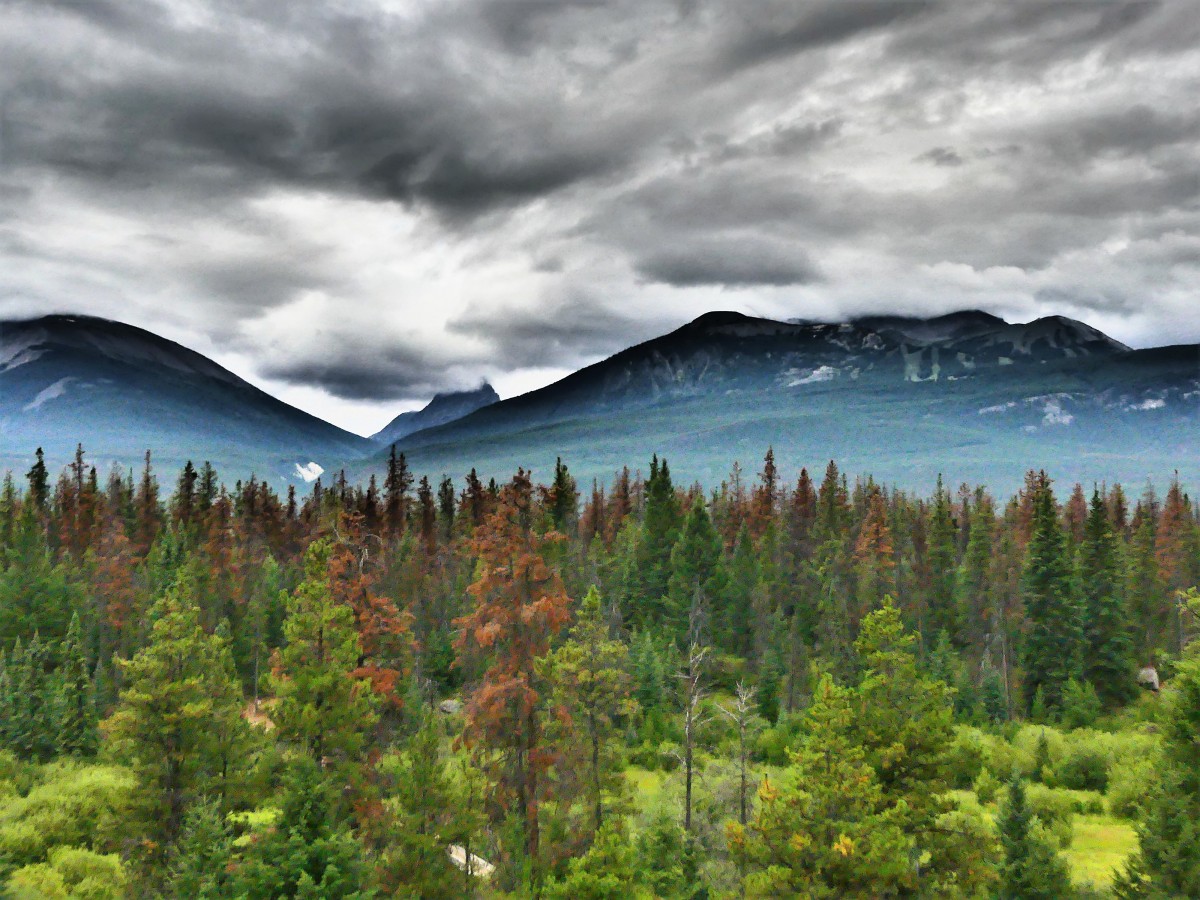 …and clouds to the left of us…

…left us completely surrounded by clouds. Now we had to figure out what to do on such an overcast day.

With temperatures dropping overnight to comfortable levels, an extended hike to the lakes became the likely candidate for the first half of our day, provided we could balance the second half of the day with a visit to Edith Cavell Mountain, located within the vicinity. However, the access road to the mountain was now restricted to limited traffic while the trail head parking lot has been undergoing needed repairs from a flash flood months ago. So, park headquarters–when it opens at 8:00 am– has been issuing a controlled number of passes to Edith Cavell at staggered times on a first-come first-serve basis.

We arrived at the requisite hour to encounter the line for passes winding around the building. 15 minutes later, Leah emerged with a 2:00 pm call time along with a two hour buffer. Our itinerary was set.

Surprisingly, when we arrived at the Valley of Five Lakes parking location, only a few cars occupied the lot. Maybe it was the threat of rain, or maybe it was our lucky day. Either way, we were not apologizing for feeling lucky.

Scanning the trail map gave us perspective for our hike,

but we weren’t prepared for a sophisticated signpost at the start of the trail,

or an amber graphic touting the trail in greater detail, which made the impending hike seem more foreboding. 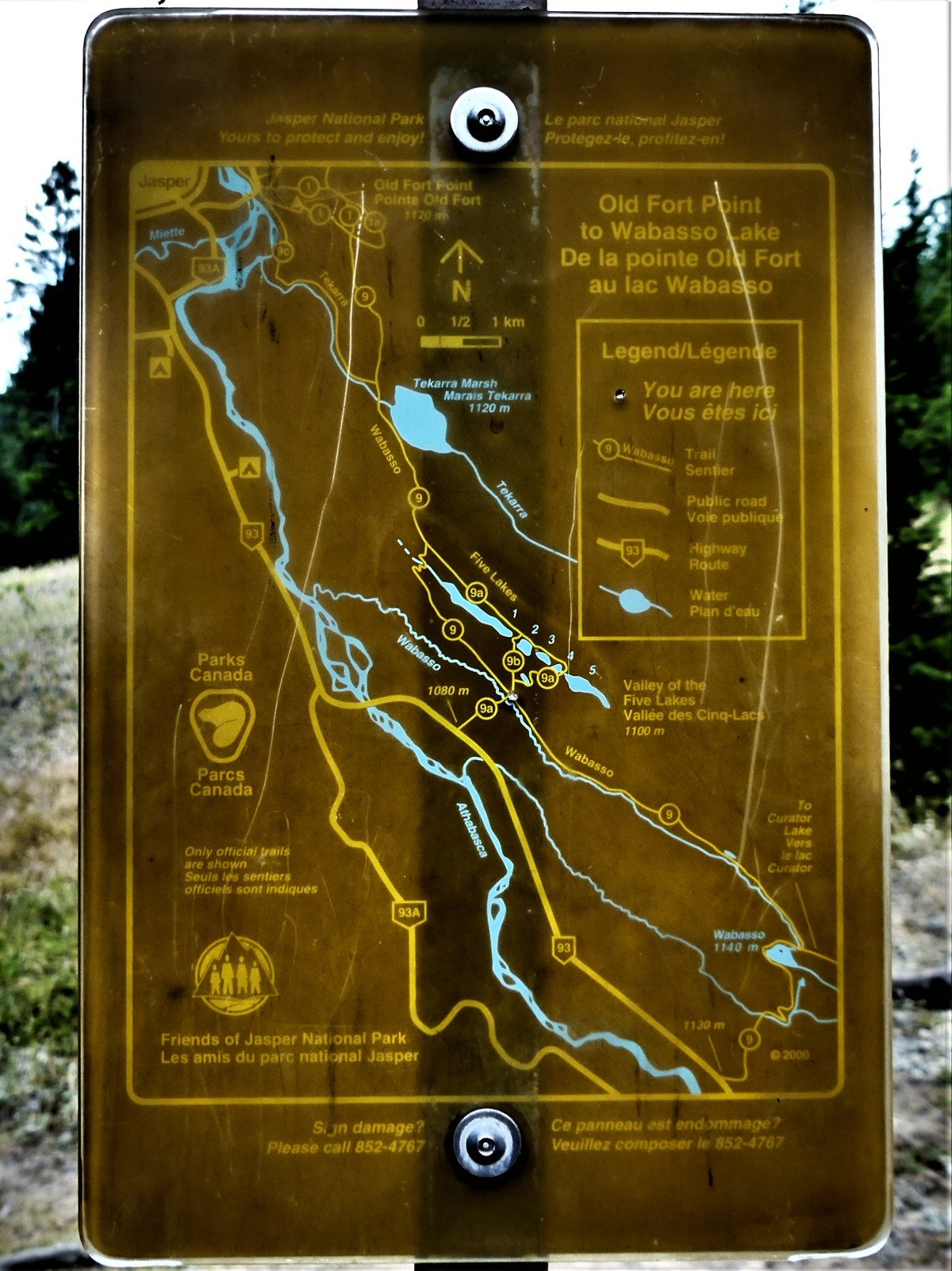 According to the legend, we were being directed to the Fifth Lake first. I thought it odd to begin the first leg of the Valley of the Five Lakes hike at Fifth Lake, but then no one sought my counsel about the matter. 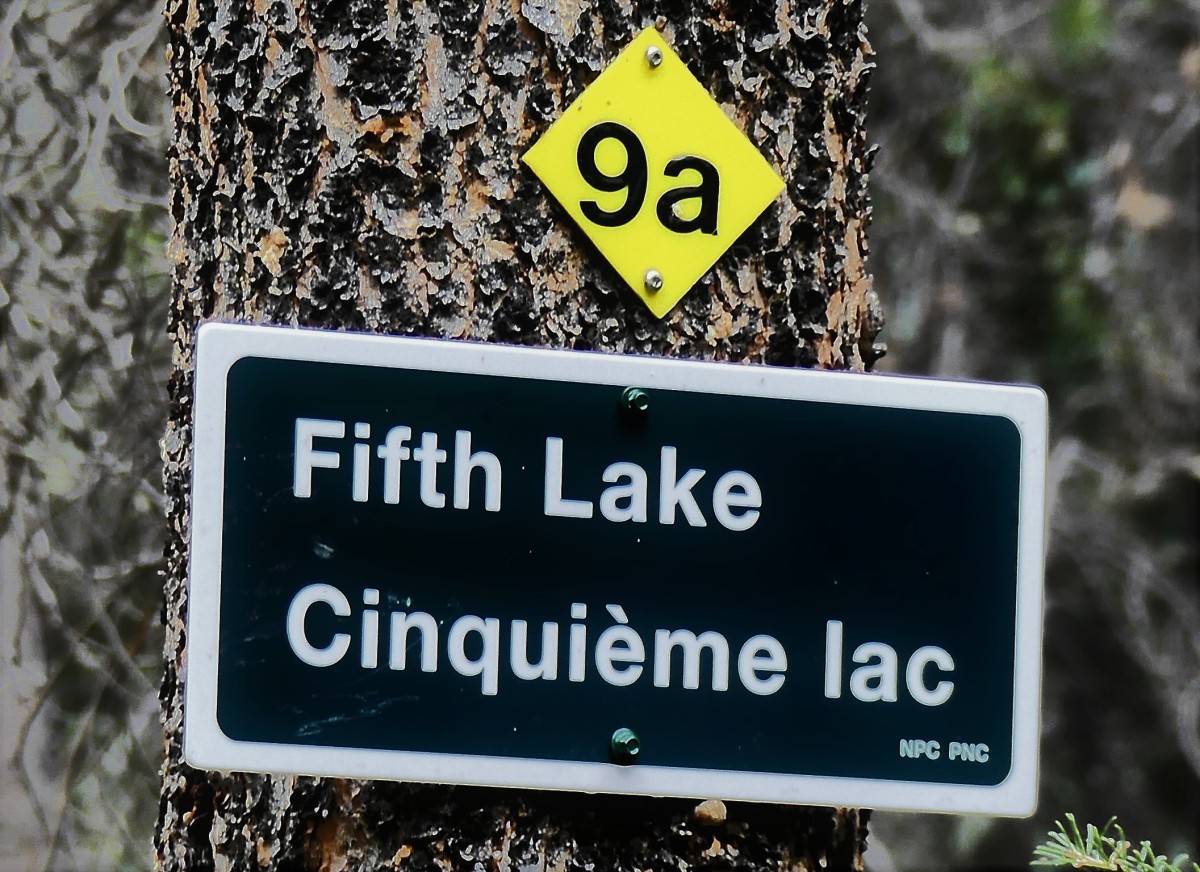 The long and narrow lake was shallow, but a raft of ducks glided across the water effortlessly. Two rowboats were chained around a tree stump by a slumping dock with a rental notice painted across the bow, but both boats were taking on water.

We rounded the tip of Fifth Lake, to discover the Fourth Lake,

which had been shrouded by the trees as we walked alongside it on our way to the first lake, Fifth Lake.

Fourth Lake was like a kidney-shaped pool filled with the illusion of a primordial incubus submerged across the diameter, but in an inviting way, drawing us closer. 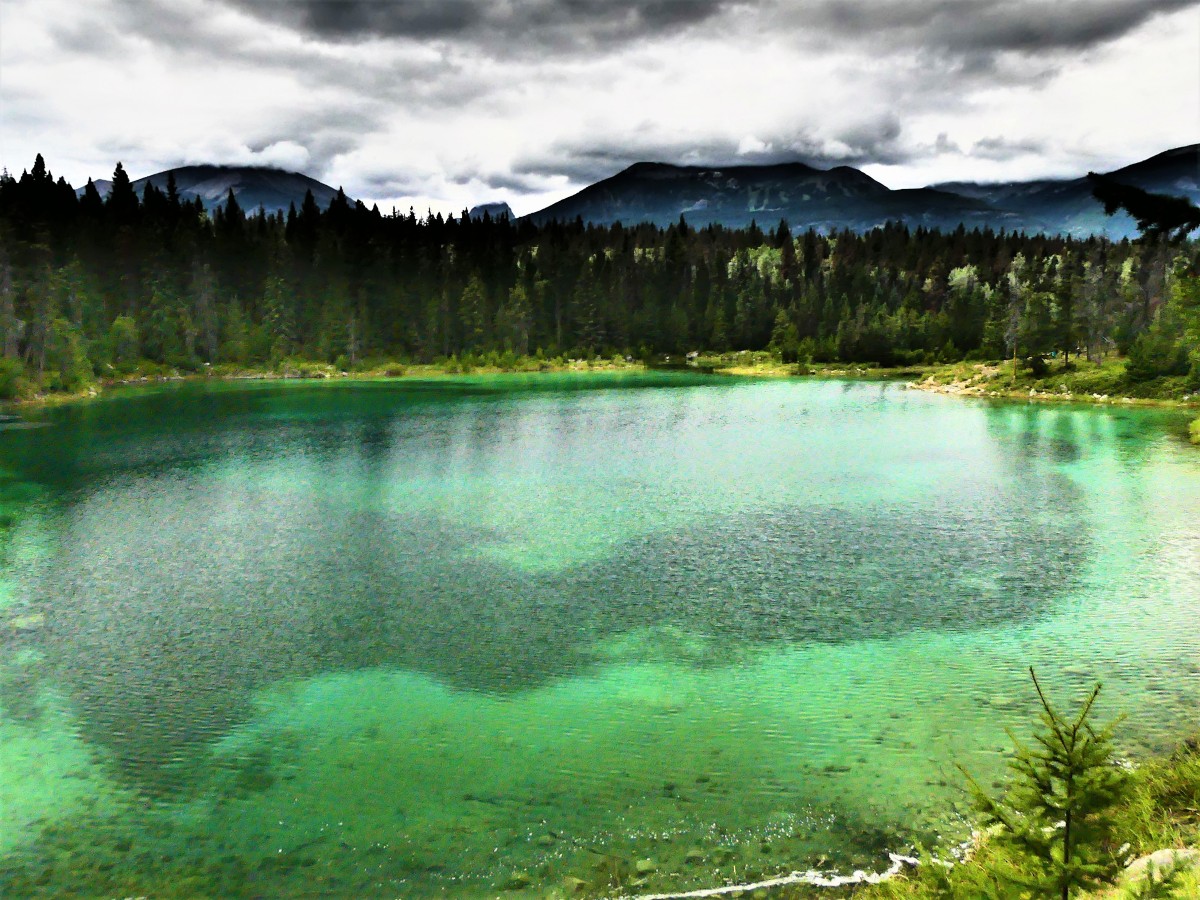 It too was shallow like Fifth Lake, but Fifth Lake reflected a paler tone. And while Fifth Lake appeared serene, Fourth Lake’s personality rivaled the Sirens.

Yet the map showed a distinctive break between the two Lakes. I had my doubts about the legitimacy of Lake Three, but no one was asking my opinion on the matter.

And then Leah called out to me from around the bend, “I found the sign for the Third Lake.”

Gaining some elevation on the trail made all the difference, revealing an eerie luminescent halo hugging the shoreline of Third Lake.

which differed from Fourth Lake’s lack of uniformity, and the shape of Fifth Lake.

And it was on to Second Lake,

the smallest of the Five Lakes, which by comparison probably deserved to be called a pond and not a lake, but no one bothered to ask my opinion on the matter.

Nevertheless, the shimmering green soup of the Second Lake was haunting and other-worldly under gray skies, where the light seemed to emanate from under the water.

With only the First Lake left to see, we approached a crossroads in the trail. Either we finish the hike by passing the First Lake on our right, or we extend the hike another 2.5 miles by circling the final lake. 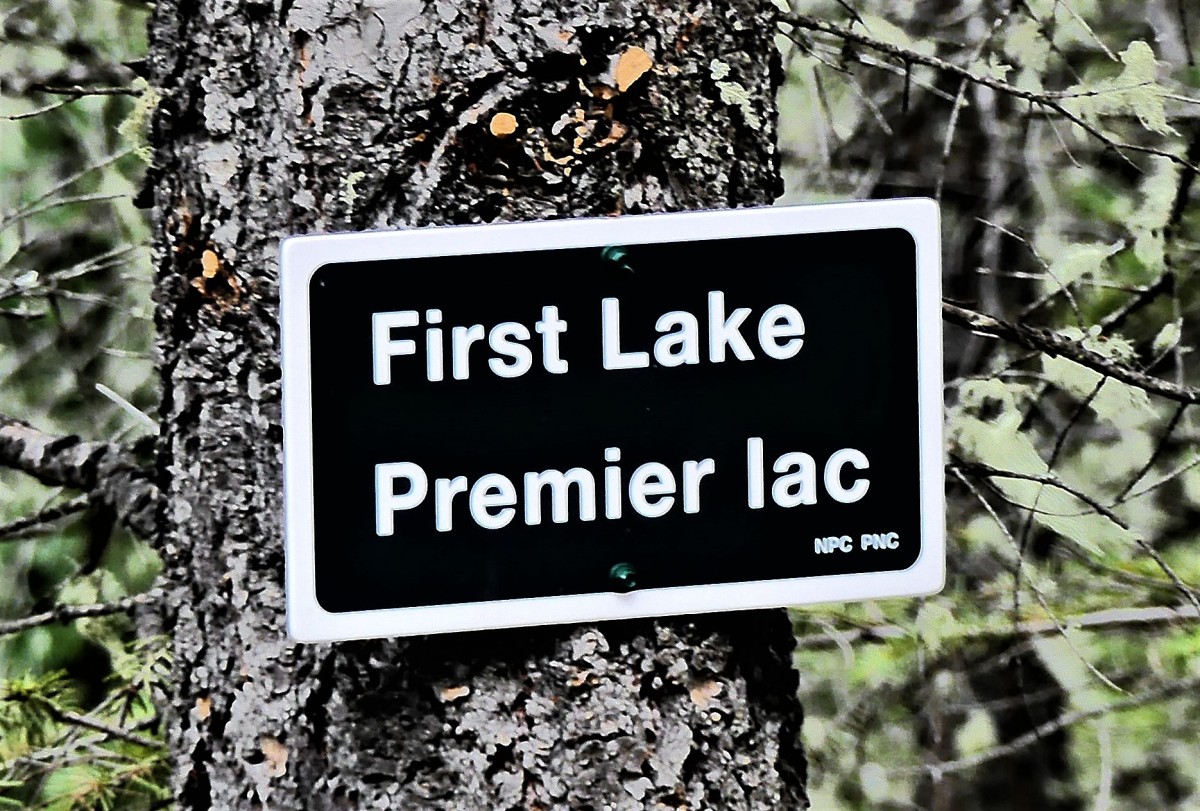 After a quick look at the long ribbon of turquoise water disappearing around the bend, I knew I needed to see First Lake from the other side. 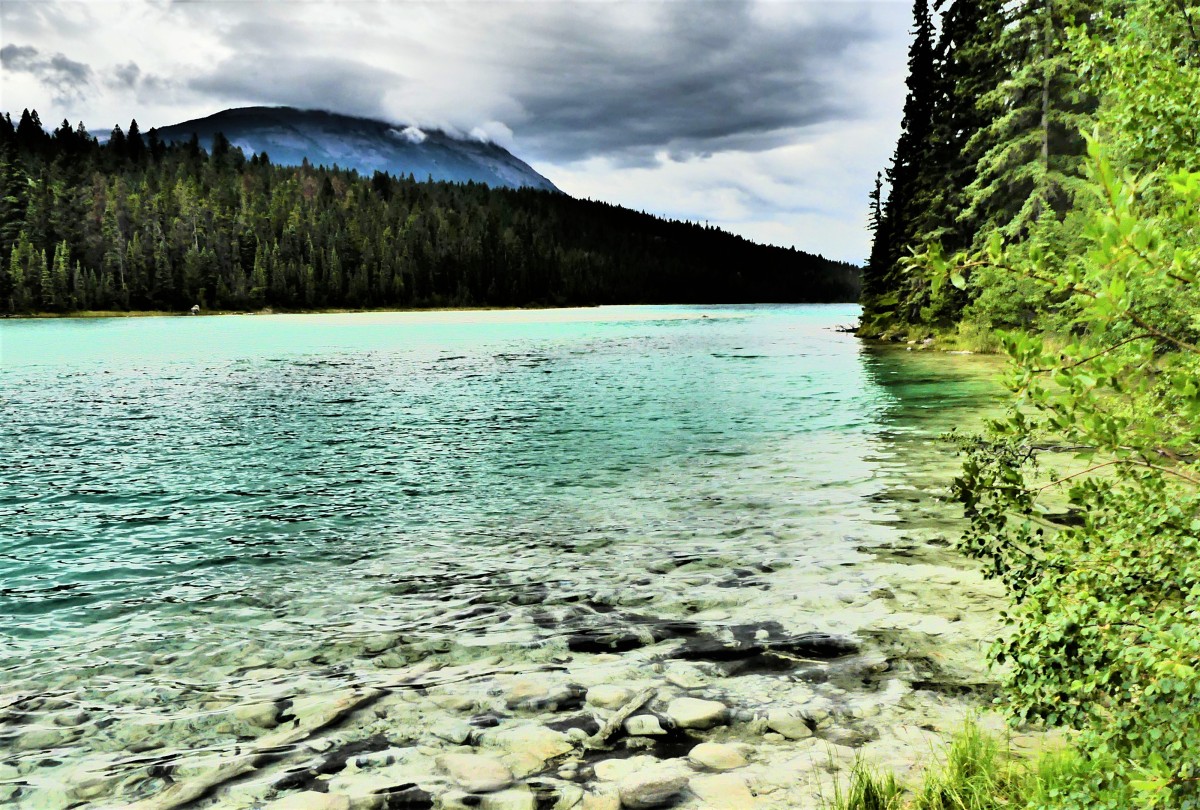 Yet it seemed like First Lake was playing hard to get. Along the way, thick tree cover offered only teasing views,

until we reached an opening that finally offered a sweeping vista of First Lake. 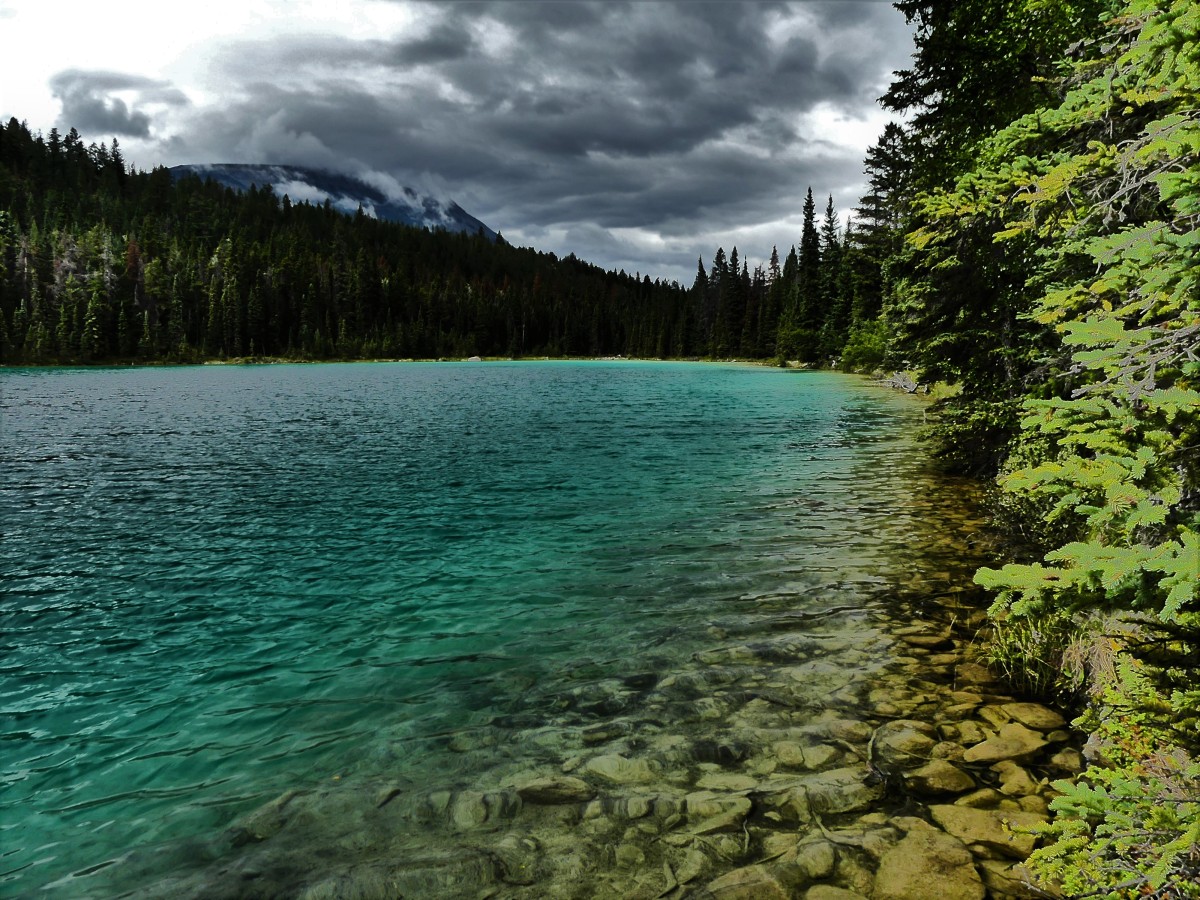 A path of braided tree roots 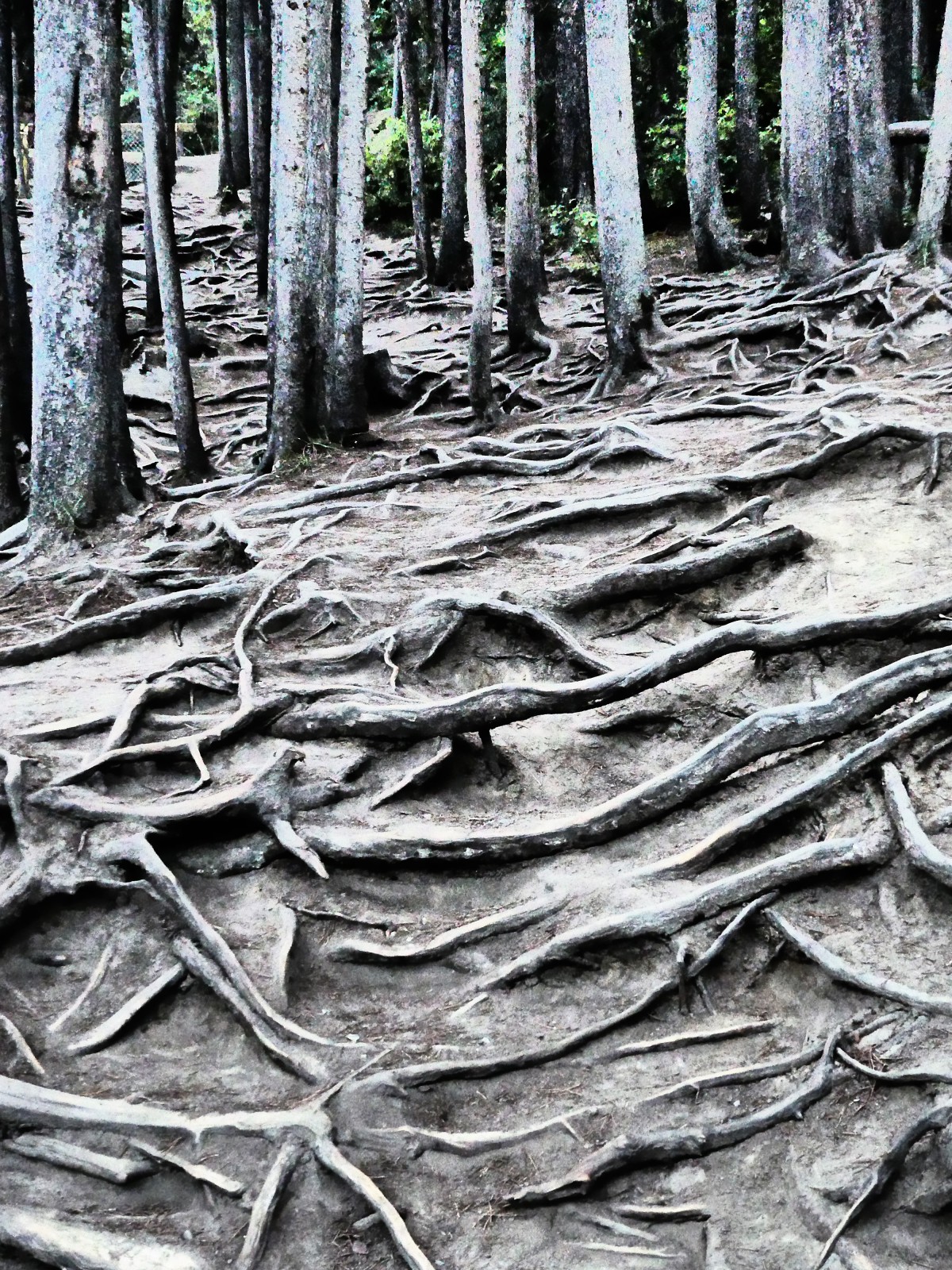 led us to the top of First Lake, 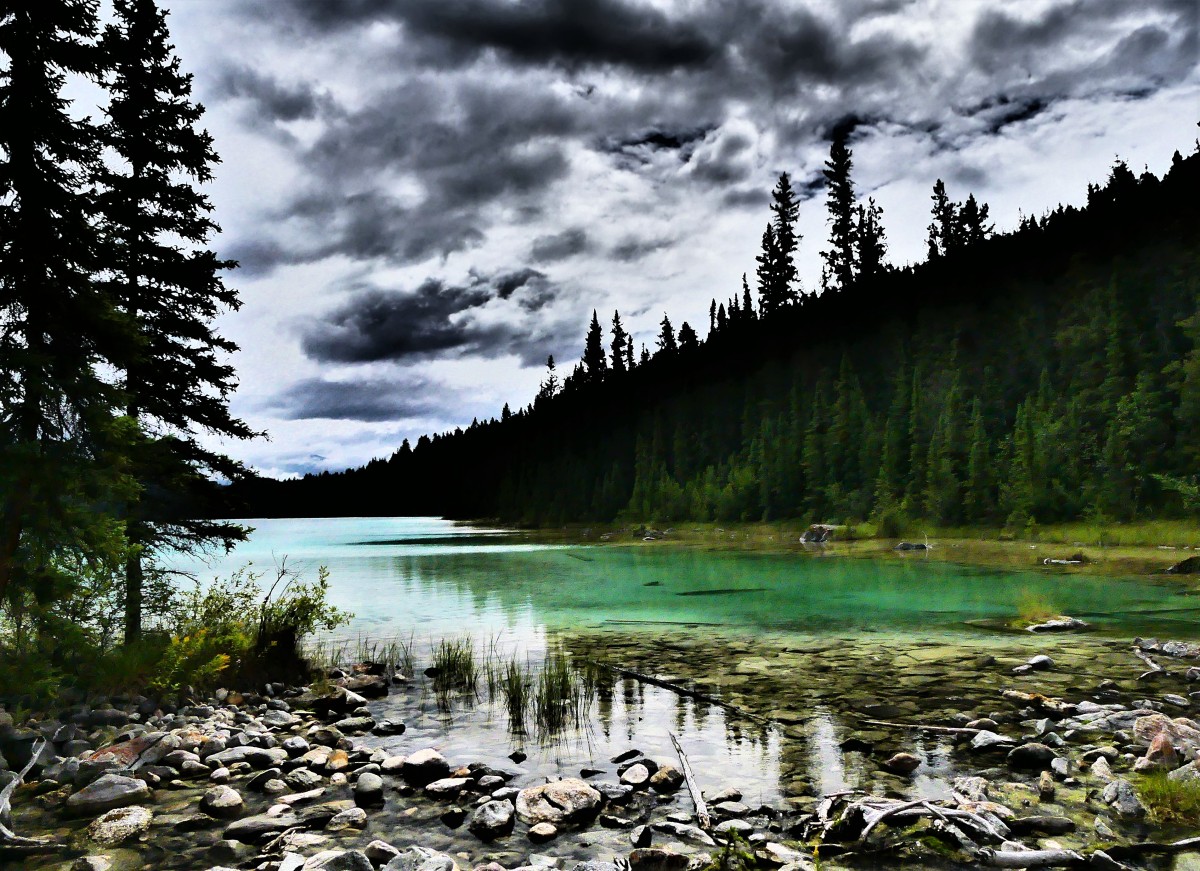 where rock rubble challenged the overflow that fed the lush marsh grass downstream. 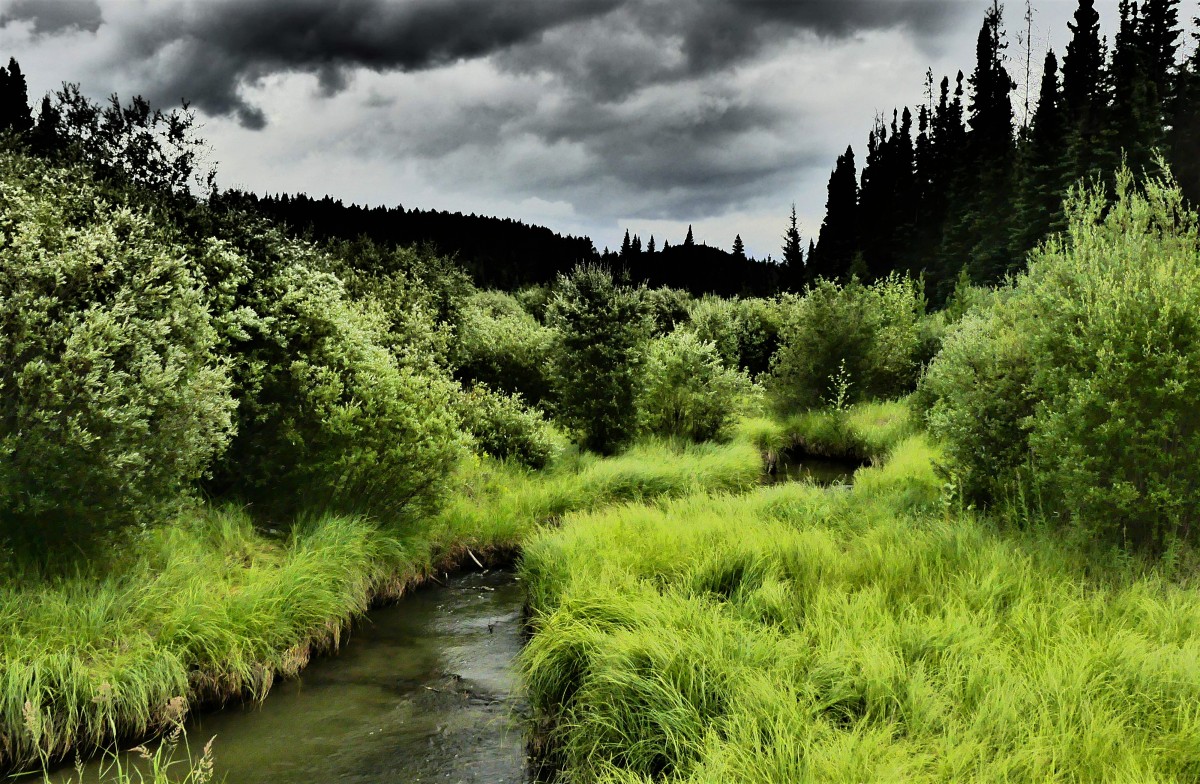 The hike was satisfying, but we emerged from the forest later than expected at 3:00 pm, giving us one hour to make the trip to Edith Cavell check-in. It was going to be a race against the clock.

The power of wind and water can carve a glacier* in uncertain ways.

But there is no mistaking the coarseness of glacial ice, compounded by the amorphous form of rushing water, which suggests a texture of turbulence. 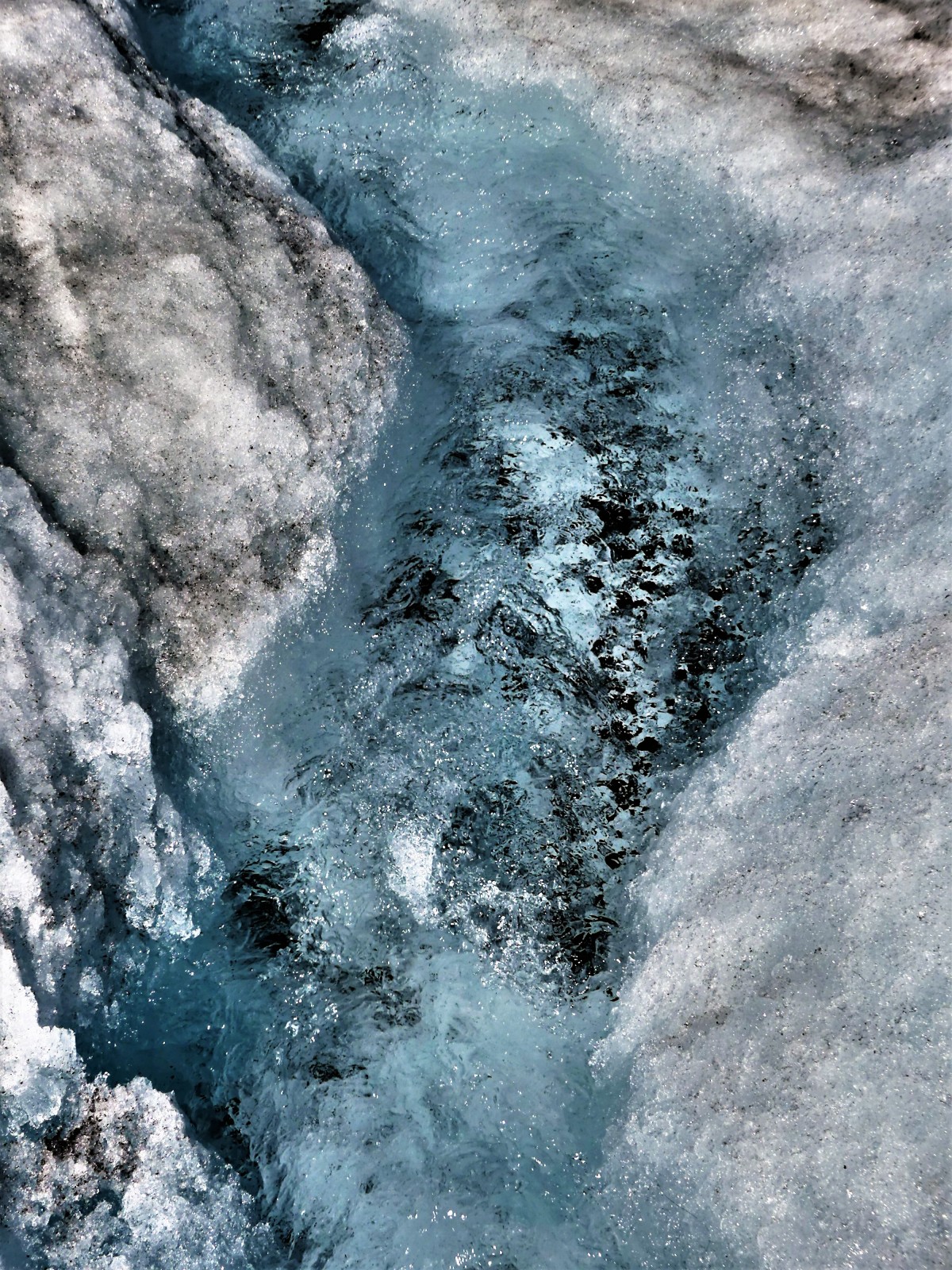