The descendents of the Mayans are a happy people. Who wouldn’t be, with 300 days of sunshine per year, average temperatures of 75°F/24°C during winter, 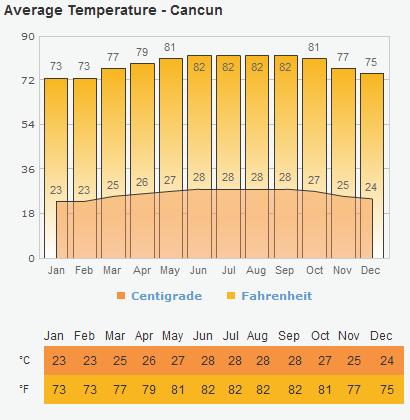 and ocean swimming available all year round in turquoise waters that hover between 79°F/26°C and 84°F/29°C.

Of course, it was only a matter of time before money interests would step in to capitalize on a tropical paradise that was ripe for the picking.

Today, Cancun International Airport connects with 122 airports around the world, bringing over 5 million tourists to the Riviera Maya in 2017, and making Playa del Carmen and Tulum the fastest growing cities in Mexico.

But it all started from humble beginnings. Some say that Jacques Cousteau, the celebrated oceanographer first realized the potential of this area in the early 1960s. After anchoring the Calypso off the nearby island of Cozumel, he shot a documentary film that captured the wealth of sea-life thriving across the Palancar reef, the second largest coral reef biome on the planet, which resulted in an unintended flood of underwater activity from diving enthusiasts around the world, thus becoming the premiere scuba destination in the Western Hemisphere.

My earliest experience in the Yucatan Peninsula dates back to June 16, 1975, when I bounced across cratered jungle roads from Merida to Chichen Itza and Uxmal in a battered VW beetle, in search of Toltec truths once touched upon in college curriculum. This excursion/honeymoon–an elaborate anthropology and archeology tour arranged by a Mexican travel agency that rented cars and booked hotels–came with a fine-print disclaimer that later took on significant ramifications when our Bug broke down on the edge of a coastal clearing that became a colossal construction zone known as Cancun.

At first, the challenge of finding someone/anyone who could speak English was resolved after discovering the bilingual General Manager of the Sheraton Hotel (Cancun’s first and only hotel at the time) sitting in the town’s only restaurant enjoying his tamales. He negotiated a time for us to use one of two known local telephones connected to civilization–one in the restaurant, the other in the pharmacia–so we might call the Meridan agency to report our breakdown.

Several construction contractors were already patiently waiting their turn to call Mexico City for payroll and supplies, all the while drinking shots of tequila and trading gossip while their road crews were laboring 24/7 to carve the future streets of Cancun. The drone of heavy machinery and the scent of hot diesel hung in the humidity amid the occasional peal of electronic church bells tolling away the hours.

Eventually, our Sheraton translator secured a line to Merida, where we further learned that we were responsible for the VW no matter what. The car had to be repaired; it could not be abandoned, and no replacement would be available.

The new challenge was to identify a Mayan mechanic in the middle of nowhere who was VW savvy, and had a surplus of makeshift parts that could be gerryrigged to fix a transmission stuck in reverse. By now, the moon was rising over the mangroves, with little chance of making Akumal by daybreak.

The GM excused himself to network around the restaurant on our behalf, while we finished our simple meal, and to our astonishment located a local Mexican versed in lawn mower repair who offered to examine our 1965 Clasico.

Amazingly, we were on the road by 4:00 am, barreling through the dark night, charging toward our next reservation south of border, trying to make up for lost time, when I reflexively slammed on the brakes in just enough time, with just enough road to spare, and just enough tread to wear, to come bumper to bovine, narrowly avoiding a black cow lounging in the middle of a two-lane highway.

Steering clear of the cow provided an adrenaline rush that would last throughout the day, notwithstanding the bottle of Tequila we drained after finally arriving at the Place of the Turtles by dawn.

Once we checked into our room, we spent the entire day at the beach, watching in awe as leatherback hatchlings emerged from the sand and found their way to the sea.

That’s the moment I feel I fell in love with the Mexican Caribbean, and continue to return to this day.