His affinty for nature, his indefatigable energy, his genius for design, his eagerness to experiment, his immense ego, his appetite for women, his dedication to family–it’s all been revealed and discussed in numerous books and lectures. But it’s also apparent from walking through his Taliesin estate in Spring Green, Wisconsin.

Leah and I would have preferred the immersive, 4-hr Estate Tour, but when I checked on-line for tickets, only one ticket was available when I needed two. It seems that no tour exceeds 21 people, matching the number of seats on the shuttle. Instead, we opted for the 2-hr Highlights Tour.

We boarded the bus at the Visitor Center– 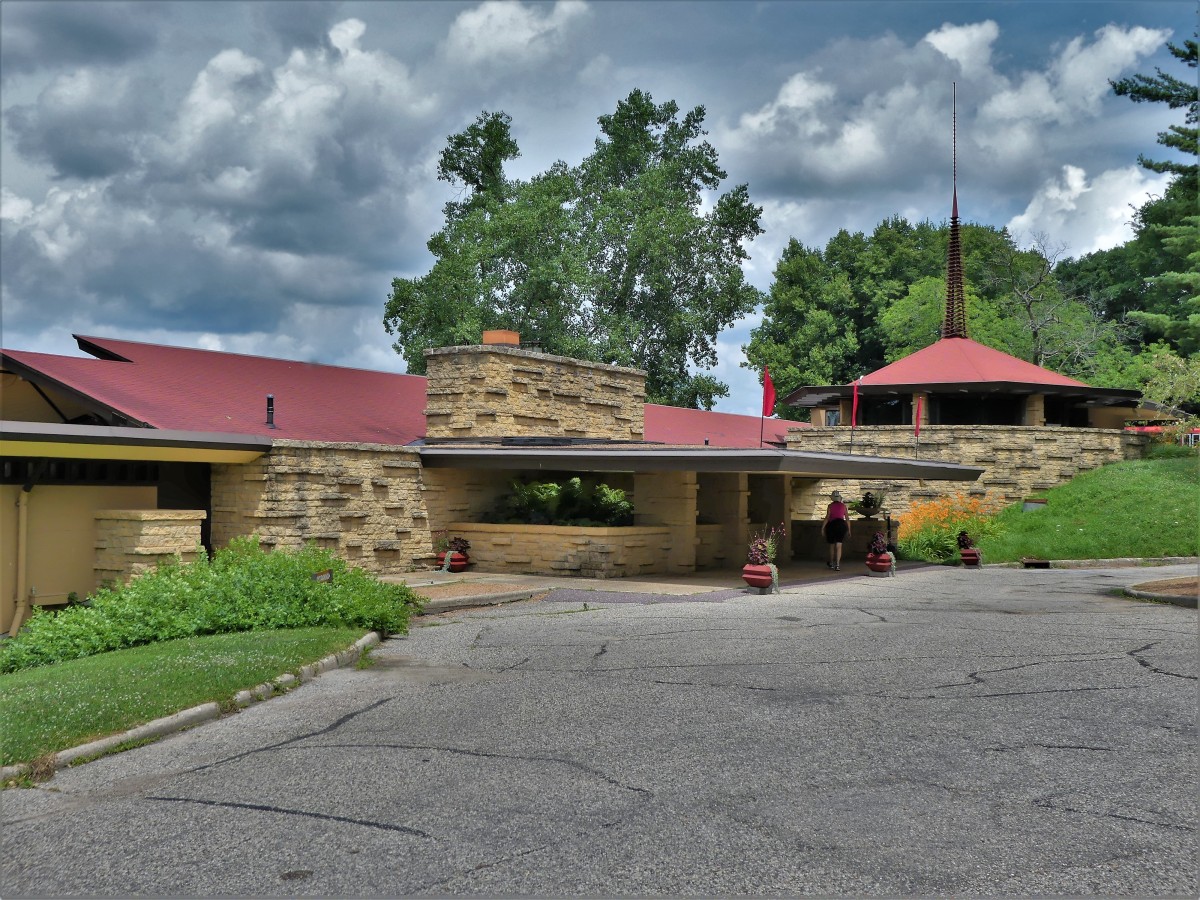 orginally designed by Wright in 1953 as a restaurant and “gateway” to Taliesin, but Wright’s death in 1959 stalled any further construction until his former apprentices completed the building in 1967.

on the way to Hillside, the site of the home school he built for his Aunts Jane and Ellen Lloyd Jones.

Currently, the building is occupied by a time-shared architecture “Fellowship”–funded by the Taliesin Foundation–that occaisionally gathers in the Assembly Hall,

and takes meals in the Fellowship Dining Room,

before returning to the 5,000 sq. ft. “abstract forest” Drafting Studio.

We finished up at Wright’s intimate, 120-seat Hillside Theater–originally intended as a gymnasium, but converted by Wright to a cultural space after determining that the arts were more important than sports–

and reboarded the bus for a brief blast of air conditioning and quick trip to Wright’s home studio, 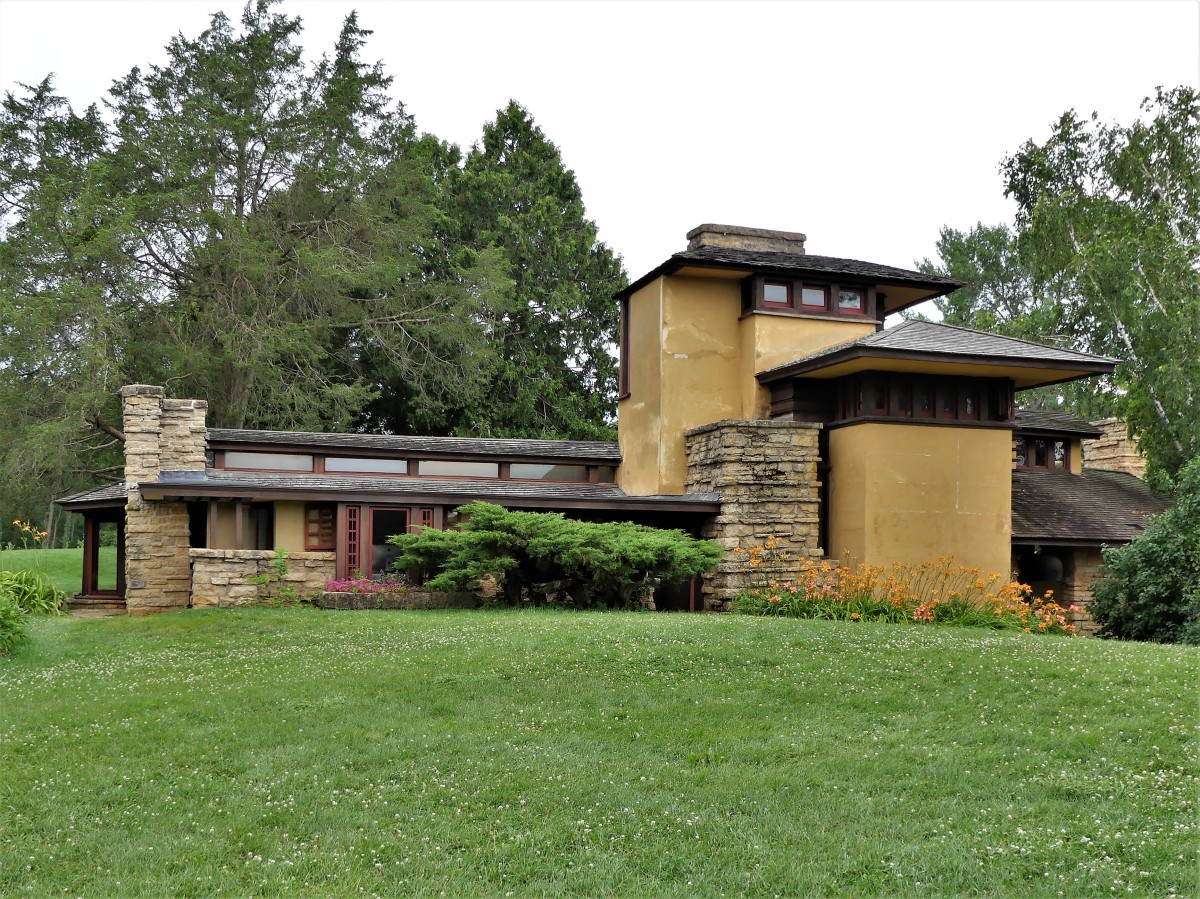 where we browsed through a drafting room filled with “Usonian” models, like the Willey House from 1934,

The house was noticably cooler, thanks to geothermal plumbing installed during the third re-build. We rounded the studio from the outside,

walked across a mound with views of the restored Romeo and Juliet windmill,

and traversed the gardens, 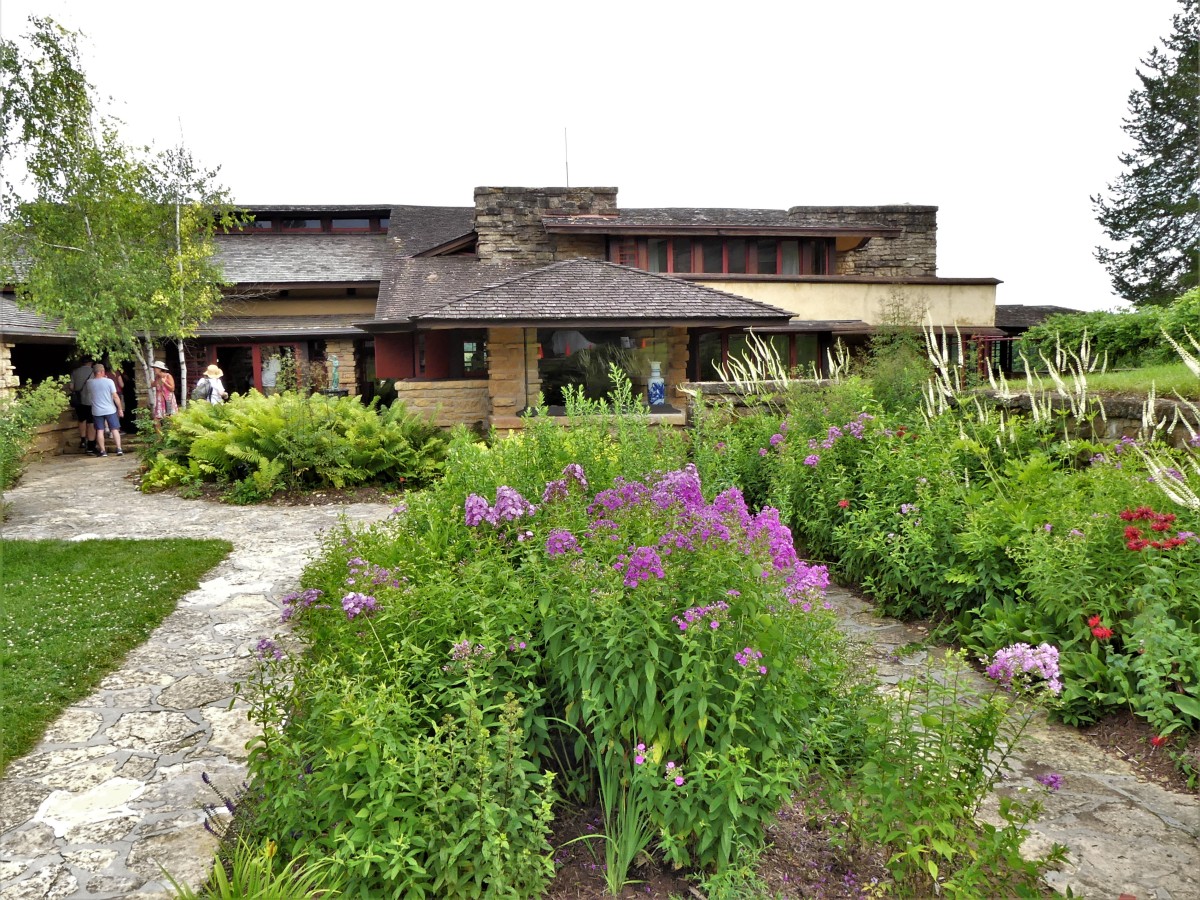 before re-entering the house through the expansive living room,

filled with wonderful flourishes, like glass-cornered windows (which Wright would ultimately perfect at Fallingwater)… 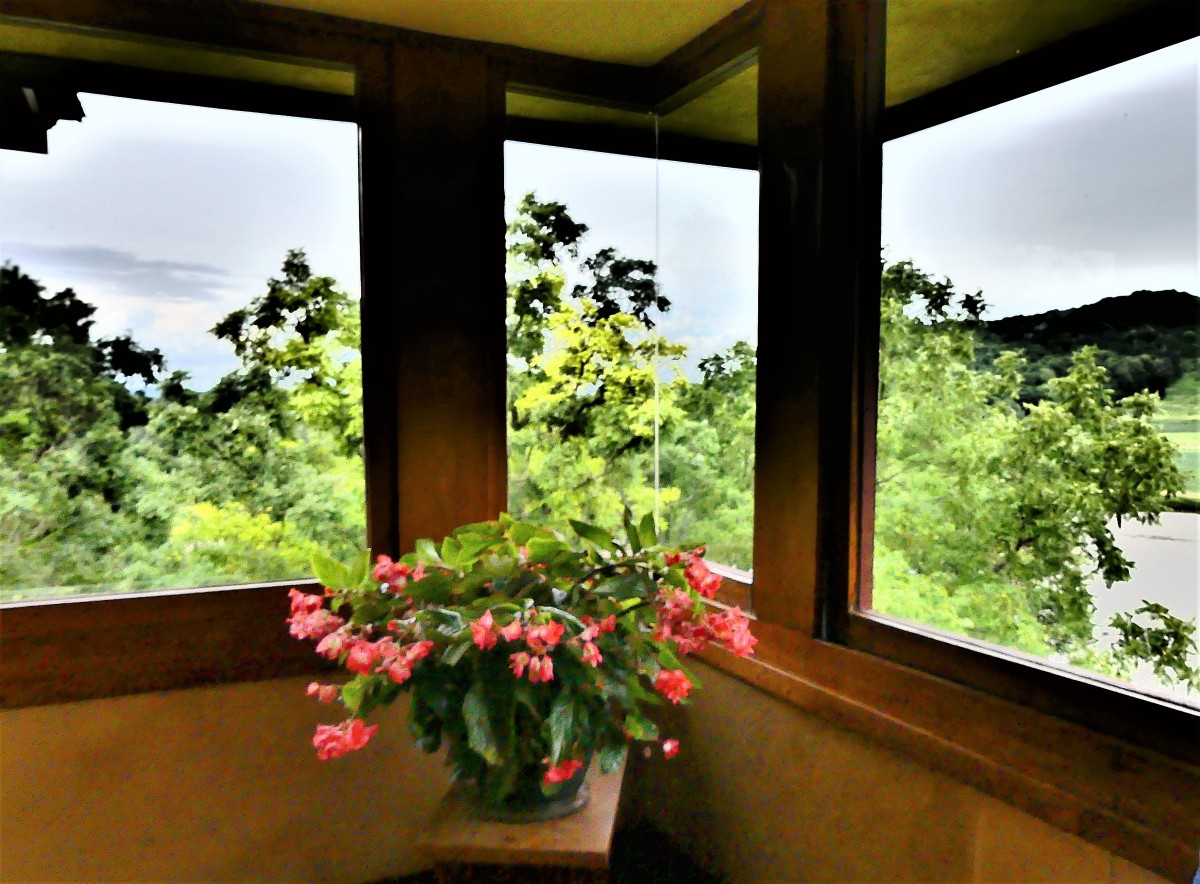 and integration of sculptures that survived the previous two house fires. 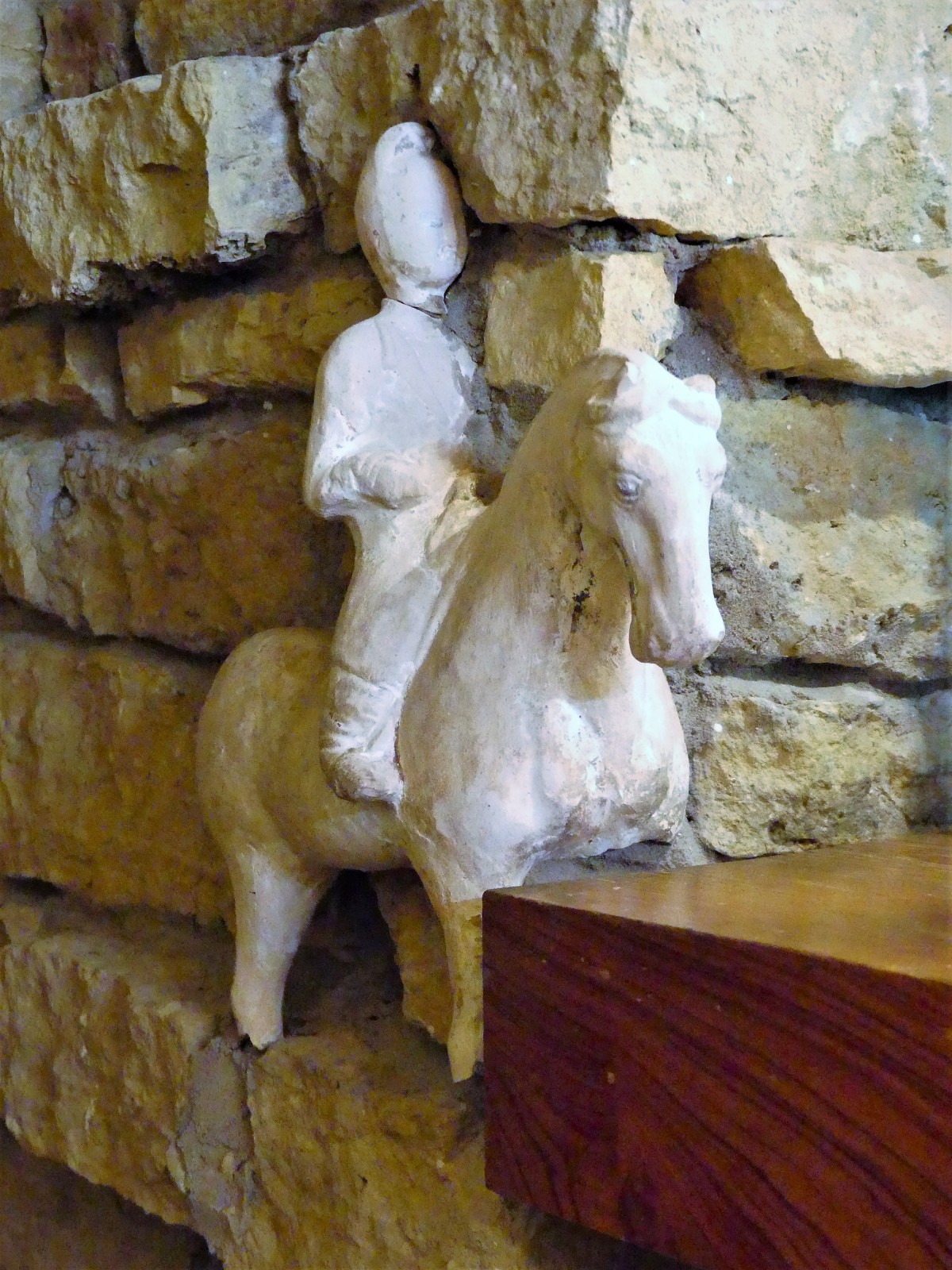 Roaming through Wright’s personal bedroom (because he was an insomniac), we discovered no door, a wall of windows without window treatments, and original electric- blue shag carpeting.

and Unity Chapel in the distance– 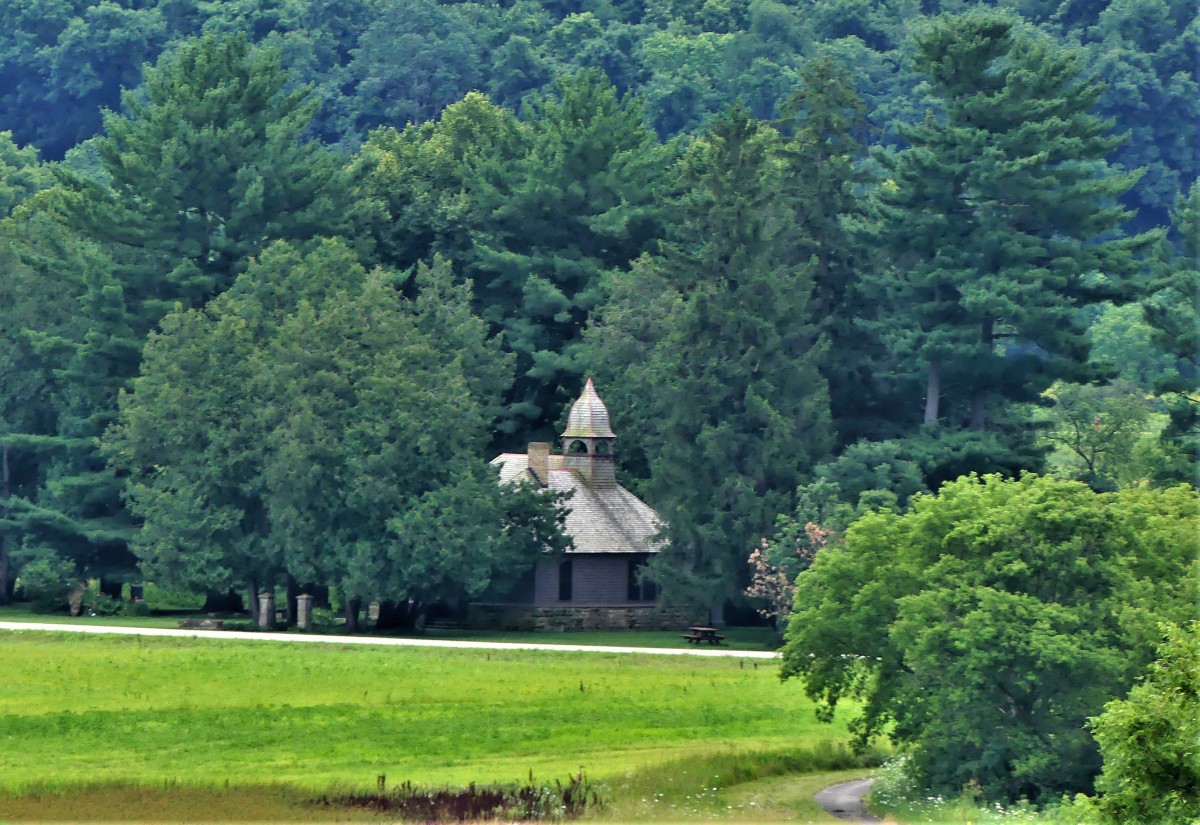 the site of Wright’s maternal family’s burial plots, his stone marker, and his empty grave.

our docent passed along a local story of intrigue and scandal:

During March 25, 1985, under cover of darkness, Frank Lloyd Wright’s body was exhumed from his Unity Chapel resting place by his oldest granddaughter, Elizabeth Wright Ingraham, and moved to a burial site at Taliesin West, in Scottsdale, Arizona.

She claimed to be fulfilling the dying wishes of her grandmother and Wright’s widow, Olgivanna Lloyd Wright, whose ashes were united with her husband’s within a memorial wall overlooking Paradise Valley. The event sparked outrage around the globe from associates and friends who argued that the architect would have desired to spend eternity at Unity Church with his family.

Even now, Spring Green residents hope that one day their favorite son will get his ash back to Wisconsin.