One of Door County’s time-honored traditions is the fish boil, originally brought to Wisconsin by Scandinavian settlers over 100 years ago. It was a simple method for feeding scores of hungry fishermen and lumberjacks after a long day on the water. And today, it’s a timeless recipe for rustic fare that’s still practiced by a handful of restaurants around the peninsula. Part history lesson, and part pyrotechnics, the fish boil is a theatrical dining experience that doesn’t disappoint.

We chose the Old Post Office Restaurant in the village of Ephraim as our dinner destination, because of its home-style, country flavors, 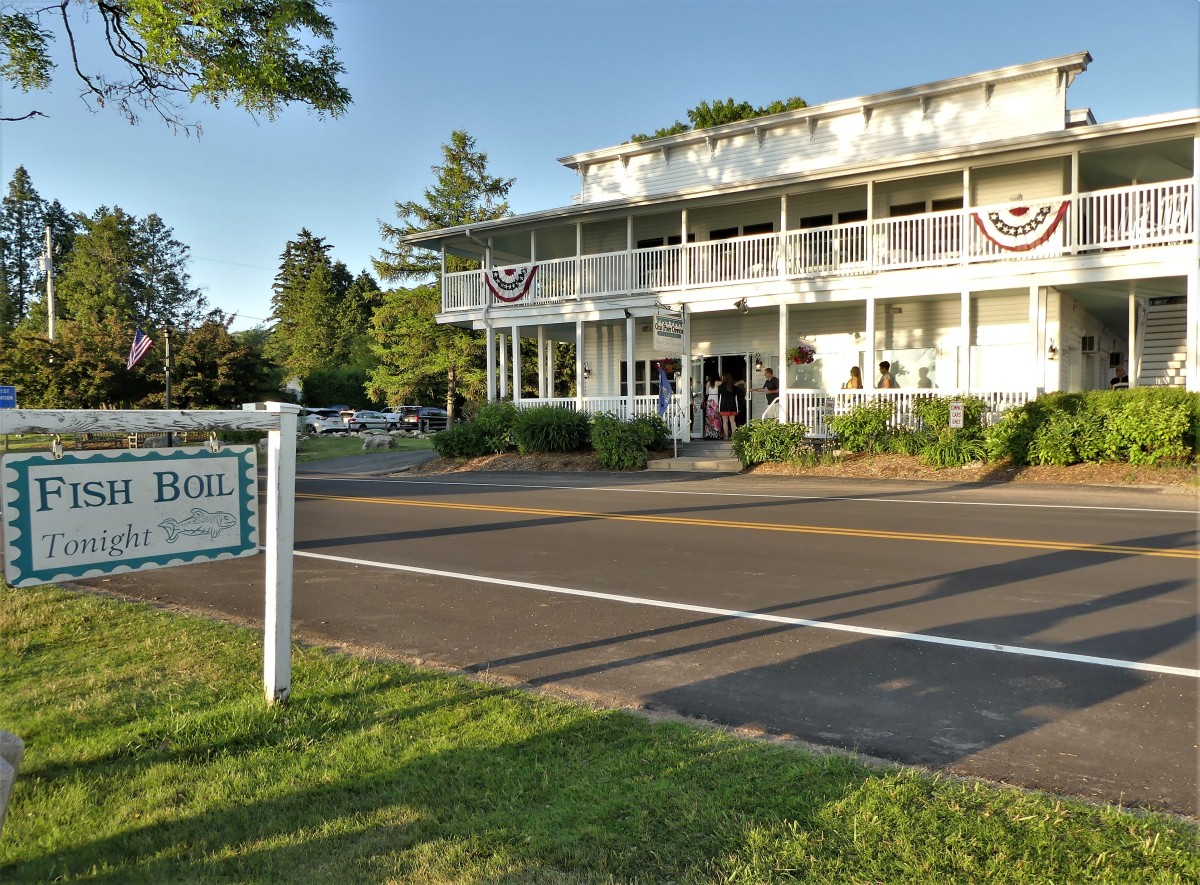 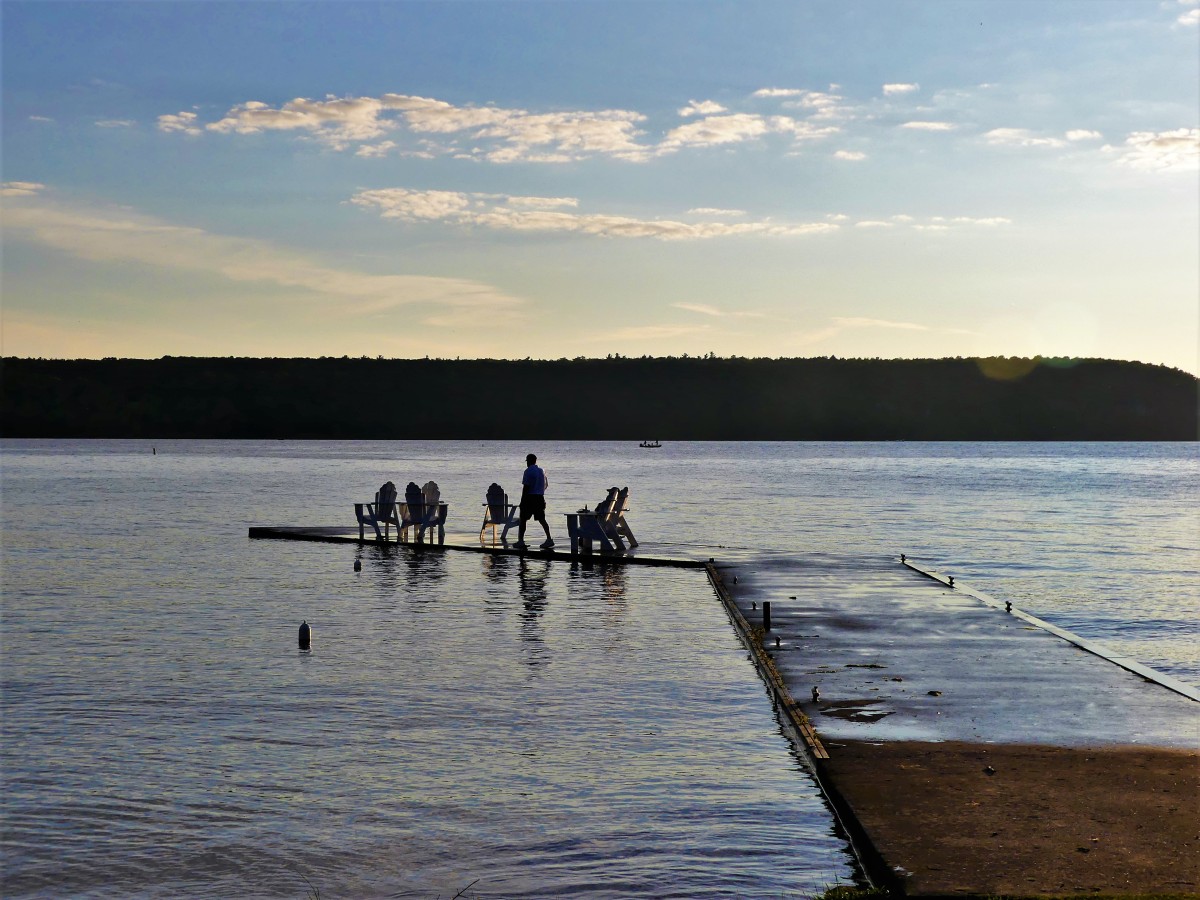 We made 7:45 pm reservations for the last fish boil of the evening, but the hostess urged us to show up a half-hour before service to experience the magic of the cook.

When we arrived at the Old Post Office, we were directed to a ring of benches behind the restaurant, with a bubbling cauldren in the center. Grown-ups were drinking adult beverages (now possible after Ephaim became a wet town in 2016), and children were staring intently into a roaring fire, dispelling the literal intepretation of a watched pot that never boils. 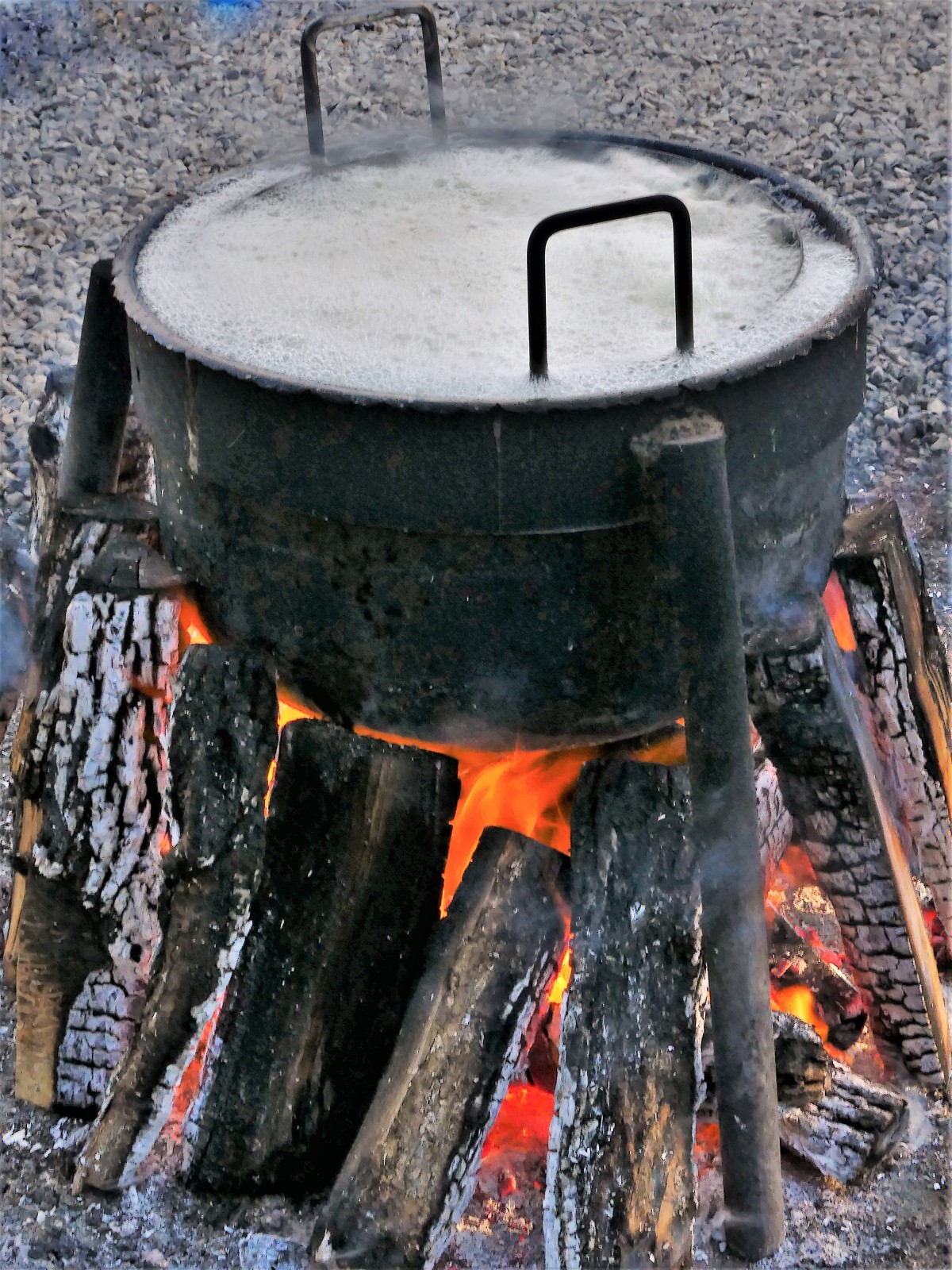 With side dishes of red potatoes and golf ball-sized onions nearly ready, Jeremy, master boiler from Door County appeared with a basket of whitefish steaks that he claimed to have personally prepped from this morning’s local catch. Having prepared thousands of fish boils over the years, he figures that he has gutted and scaled over 20 tons of Lake Michigan whitefish to date.

and stoking the fire to achieve a high boil, Jeremy waited for fish oils to rise to the top (assisted by the one-pound of salt for every two gallons of water ratio),

finally signaling the moment we’d been waiting for–dousing the fire with a can of kerosene.

The fire ball brought the heat to all of us in the circle. It was enough to cause the resultant boil over–clearing the broth of ash, foam and fish oil.

When the flames subsided,

the fish was cooked perfectly… 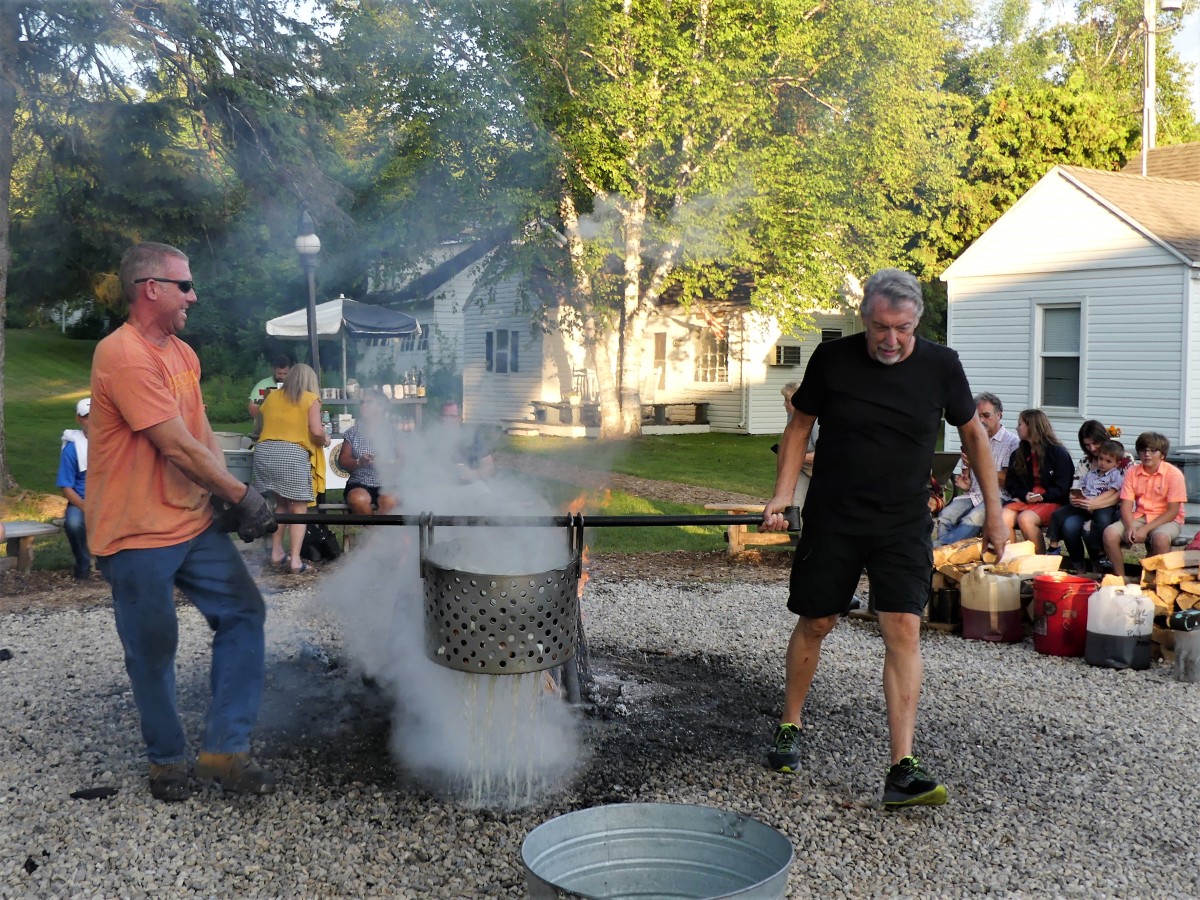 and it was time to eat.

We gathered at the restaurant entrance and lined up–buffet style–to receive our dinner, topped by a ladle of melted butter and a wedge of lemon.

Servers came around to offer drinks and expertly debone our fish… 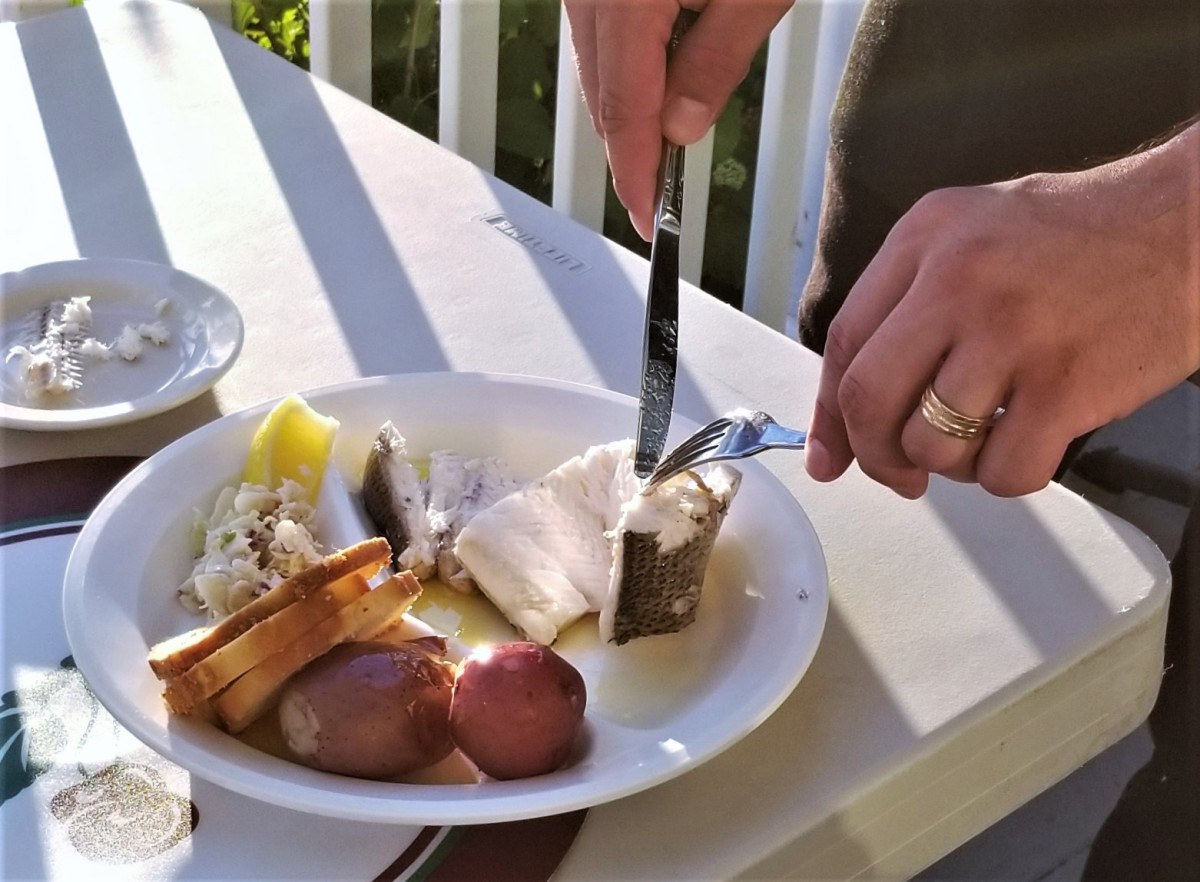 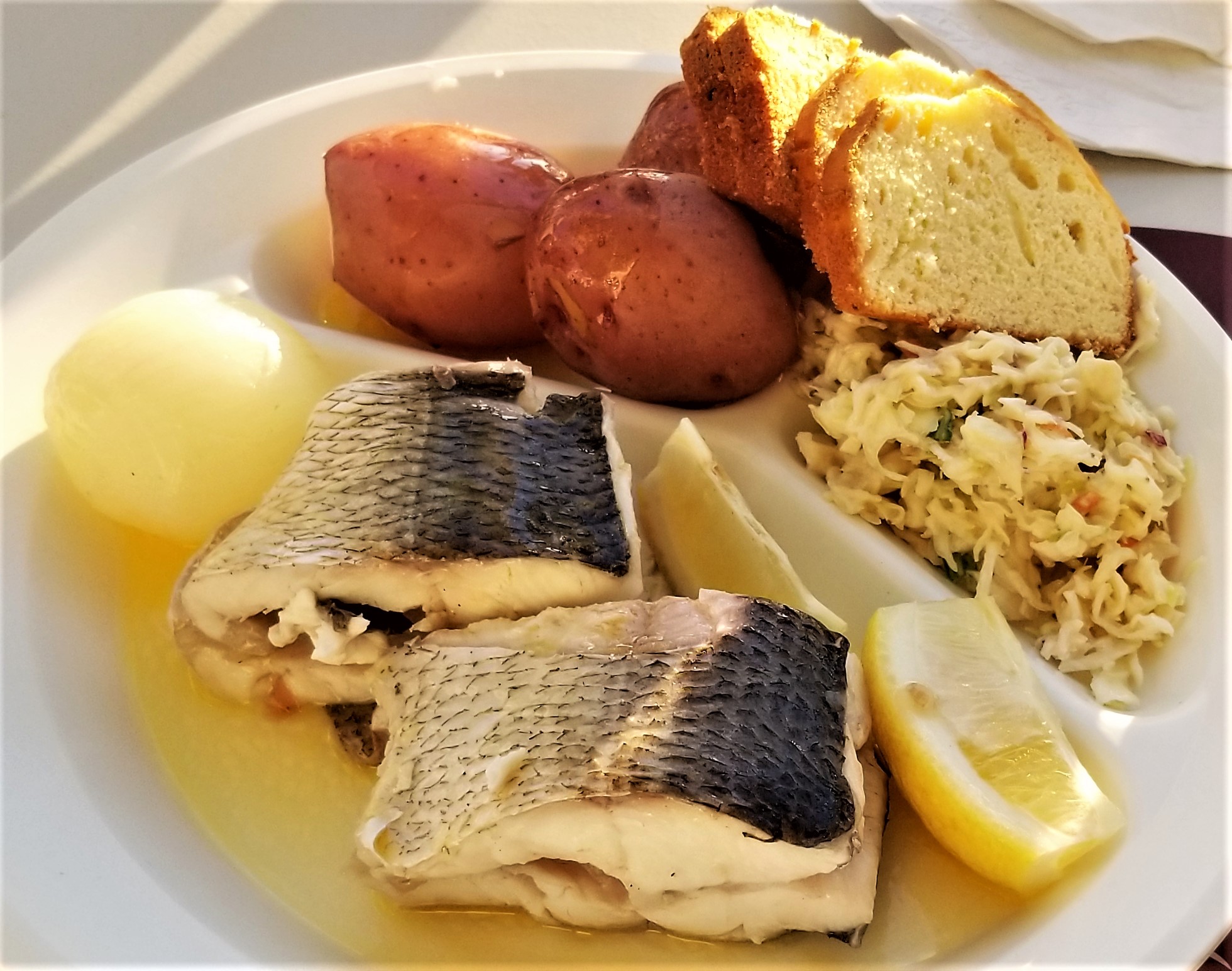 and we ate until the sun went down before us. 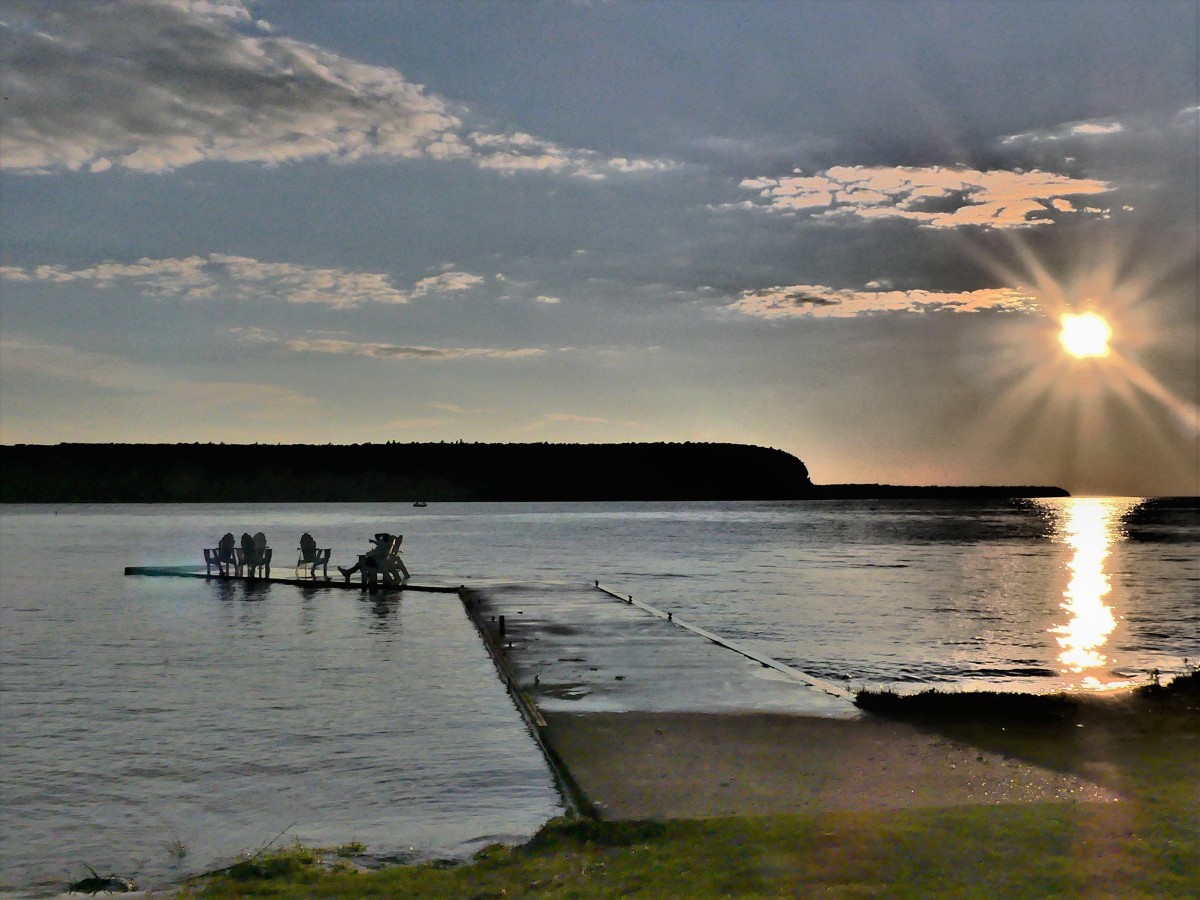 What could be better? Cue the sunset.