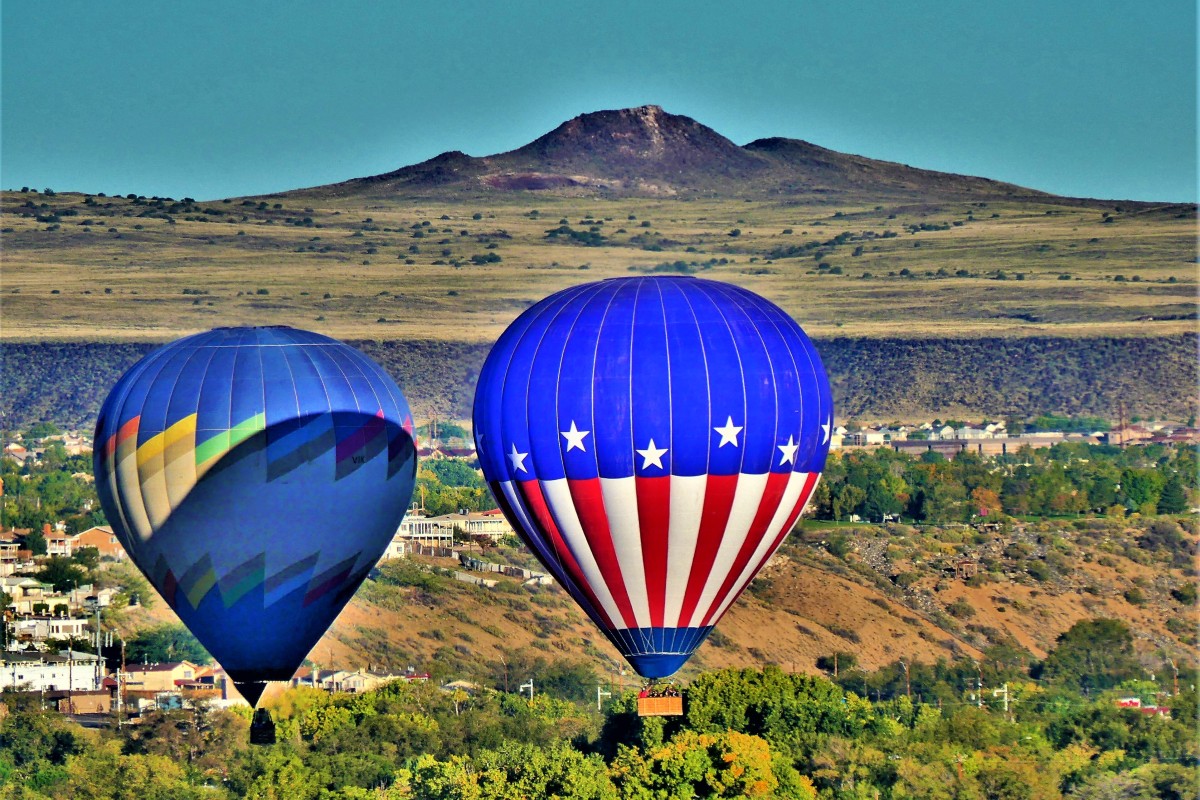 While I’m on the topic of balloons (see Balloon Glowdeo™, and Botswana by Balloon) I’ve recalled my first balloon ride from two years ago:

“$450 for a balloon ride?! You’ve got to be kidding” I exclaim to the Rainbow Ryder rep on the phone.

“That’s the price, sir. We are the exclusive balloon ride provider for Balloon Fiesta, unless you’re willing to fly outside the ‘Albuquerque Box’,” she managed.

“It’s a weather phenomenon peculiar to Albuquerque,” she points out, “where the lowest winds move in one direction, while the higher winds are moving in the opposite direction. That way, our pilots can take advantage of the different air currents–by floating higher or lower, and returning you close to your original launch point.

“That’s the rate for a balloon ride during Balloon Fiesta, sir. And I only have a few openings left for Saturday and Sunday,” she warns.

And the call is over.

And that was a drag, since Balloon Fiesta is the largest gathering of hot-air balloons in the world, with more balloons lifting off together (mass ascension) than anywhere.

Leah sensed my disappointment. “Maybe it’s cheaper if you found an outfitter outside the box. Would you still be interested?

“I think I could manage to get excited,” I lamented.

After a flurry of phoning and pricing, I secured a dawn launch on Saturday for $250 with World Balloon, albeit on the northwest side of town, miles away from the Fiesta.

Launch day bears all the markings for a picture-perfect take-off: early air temperature hovers in the mid-40’s; the wind is streaming from the north at 8 mph; and the sky is clear as shimmering water.

A group of fifty men, women, and children are sub-divided into five, and assigned to a pilot and his balloon crew. Each chase van carries two wranglers, ten passengers, and a trailer packed with gear. We congregate at a barren football-sized lot, and watch as five balloons are prepared for flight.

The burners are tested.

With dawn breaking over the horizon, the balloon is unfurled, and rigged to the basket.

An industrial fan blows cold air into the mouth of limp polyester, and behold, the balloon takes shape. 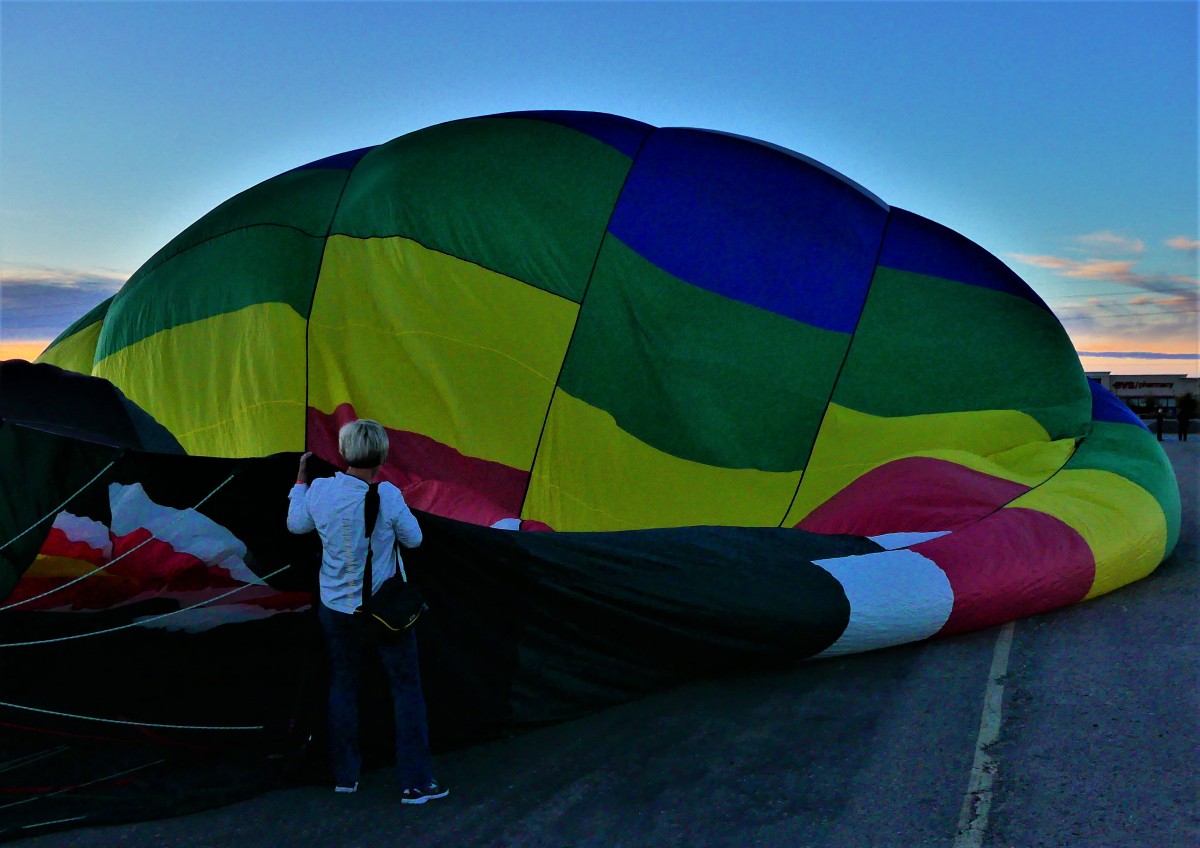 Roy aims the burner flame into the mouth to heat the air,

and eventually expands the envelope to fullness. 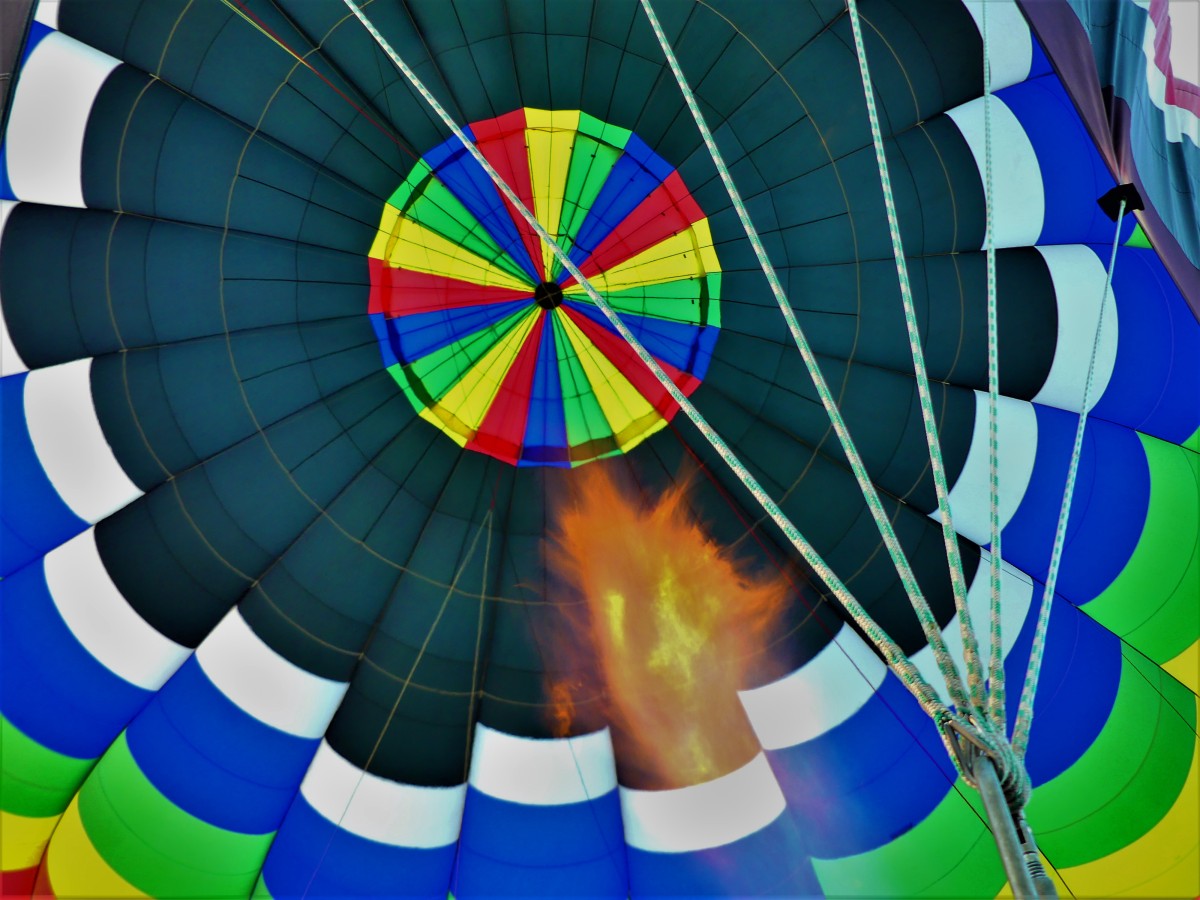 The buoyant balloon rights itself,

and the six of us scramble inside to bid adieu to terra firma, and gently float away…

…one step ahead of a second balloon.

All the while, balloons below…

…are preparing to follow our Airstream (wink wink, nod nod). 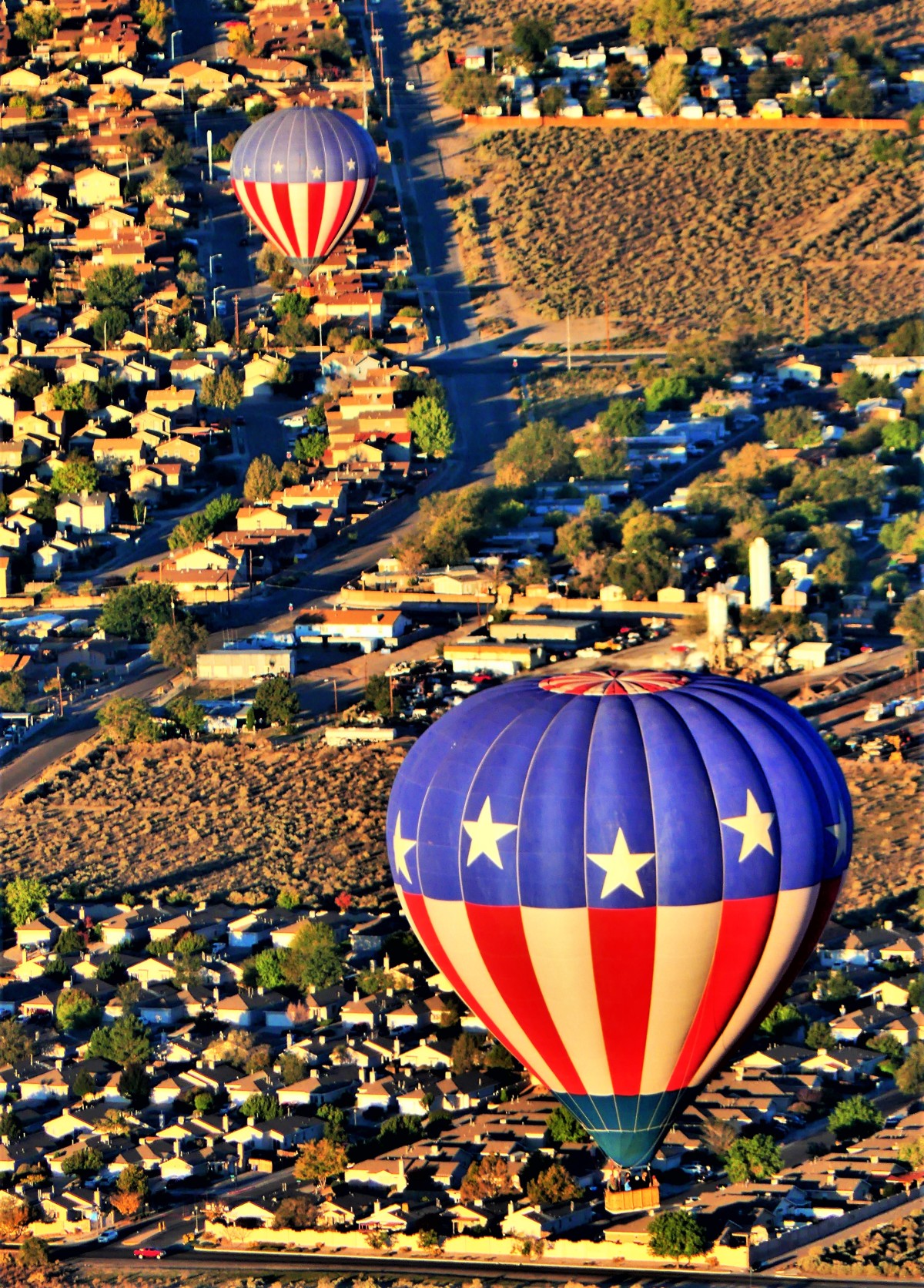 Our pilot, Roy pulls on the burners,

where a birds-eye view of the valley below,

reveals a cityscape punctuated by fantastic dots of floating colors.

Yet closer inspection reveals the full dimension of a multi-colored mushroom gliding through an azure sky.

After forty-five minutes of soaring and dipping through neighborhoods–arousing excitable dogs,

Roy is tasked with finding a landing site along our flight path–wide open and away from wires–and accessible to the chase team who’s been following us since our launch. After a few false starts, we locate a large house devoid of landscaping, and gently settle back to earth.

However, a chain-link fence lines the perimeter, and a locked gate gives us no way out. A woman from Birmingham, AL vaults over the side of the basket and runs to the front door to alert the owners to unlock the gate, but nobody’s home.

So it’s back in the air, with the van in pursuit, until we mobilize at a strip mall. 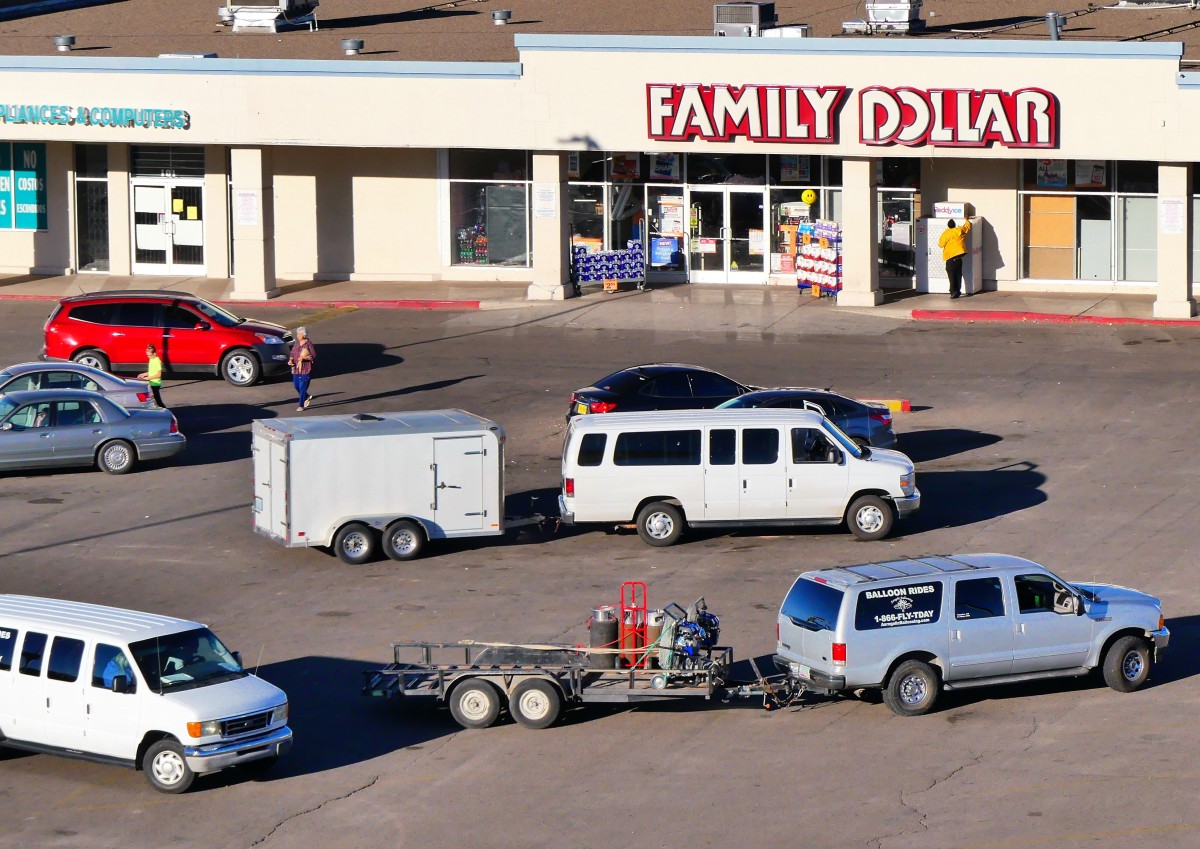 After a quick exchange of passengers (six out and four in), our balloon is re-released with its second set of aeronauts, 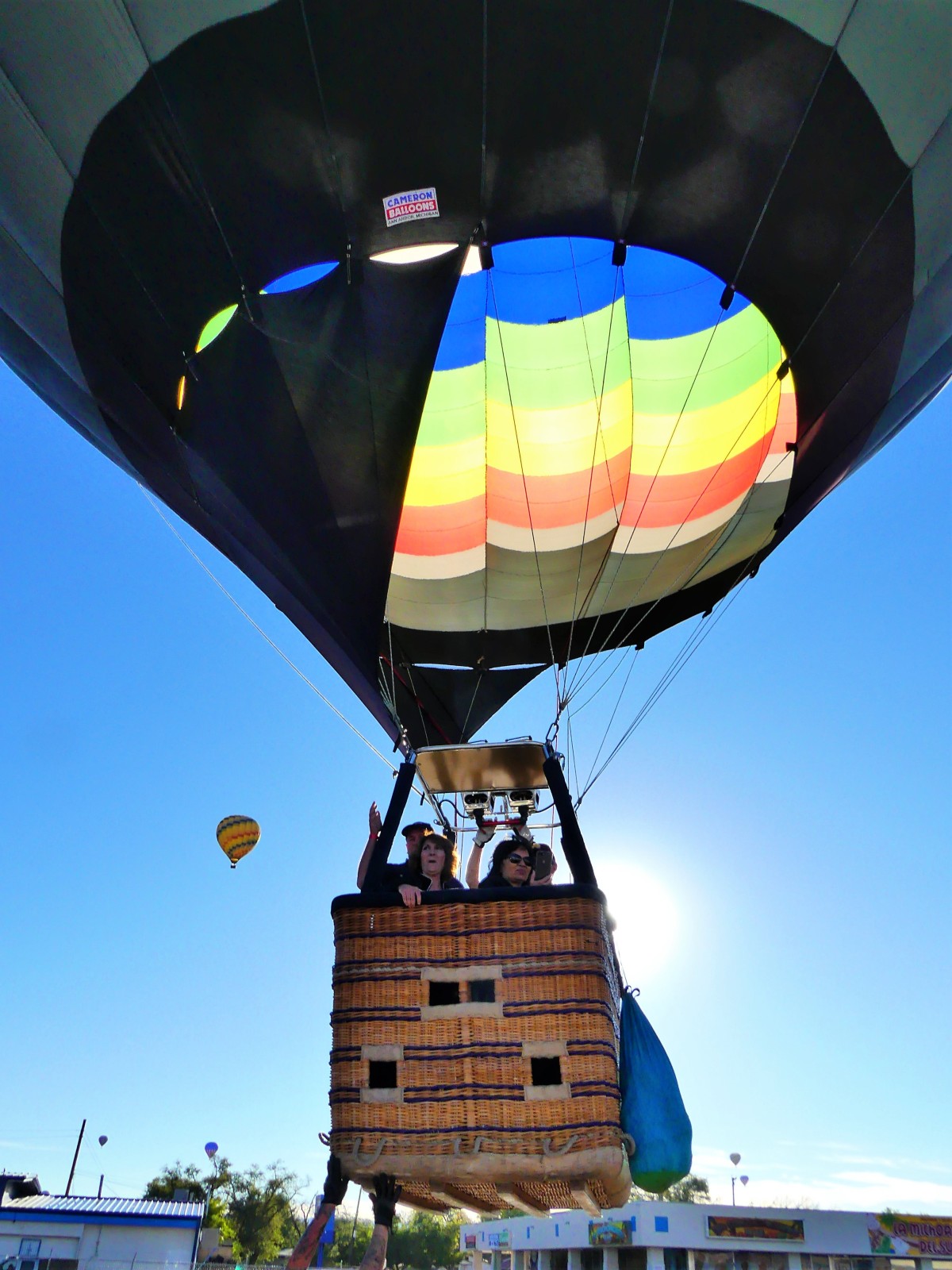 drifting higher into the blue yonder.

Fifty minutes later, the vacant parking lot beside the church provides the perfect setting for a second re-entry.

Whereupon, the balloon is quickly collapsed, 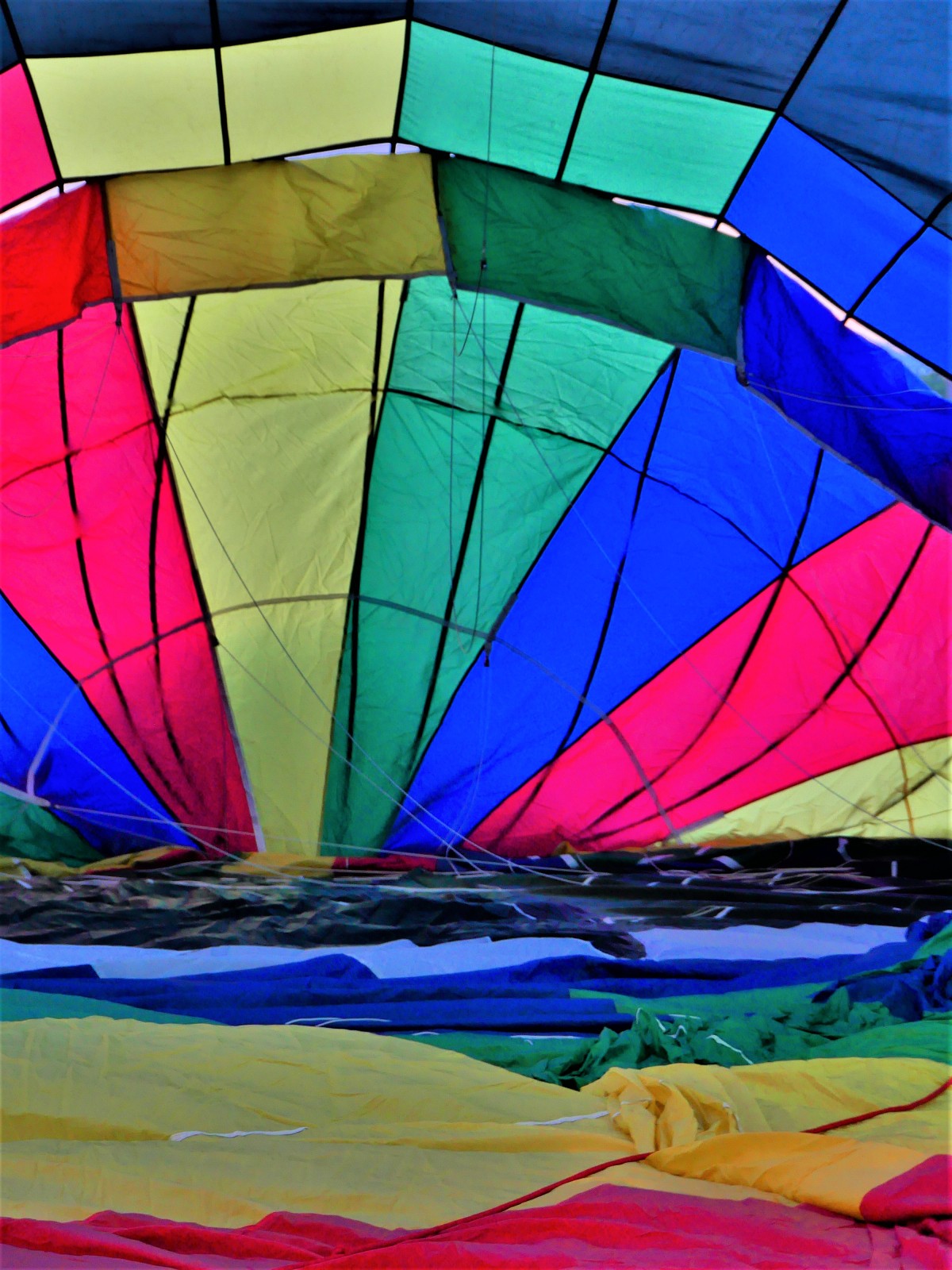 and packed away, until next time.

Back at base camp, it was time for a champagne toast, and a recitation of the balloonist’s prayer:

I loved it, and I’d do it again. I guess that makes me a balloonatic.