While much of the country is enjoying a refreshing blast of Arctic air to put them in the holiday mood, southeastern Floridians are currently languishing under fair winds and sunny skies, and wondering how they’ll ever manage with temperatures climbing to 80 degrees.

“Look, we’re gonna be in Florida for a few months. As tempting as it is to stay inside and hunker down for the winter, we can’t allow the weather to dictate our lives. We’ve got to get out and stay active. Maybe we should go for a hike,” stated Leah.

“Agreed! In nine months of traveling, we’ve never let the weather interfere with our outdoor plans. So if you’re up for it, we could hike to the observation tower atop Hobe Mountain in Jonathan Dickinson State Park,” I suggested.

“Are you sure?” Leah posited. “It’s been a while since we’ve done anything that strenuous. We could be setting ourselves up for a painful tomorrow.”

While it’s true that we’ve been sedentary lately, and maybe gained a pound or two from Thanksgiving overeating, I thought we could use a legitimate challenge to clear the cobwebs and get the blood pumping in ways when we were performing at our peak.

As a warm-up to our hike, we rode our bicycles to the trailhead parking lot, passing the Loxahatchee River,

and two camouflaged sandhill cranes along the way. 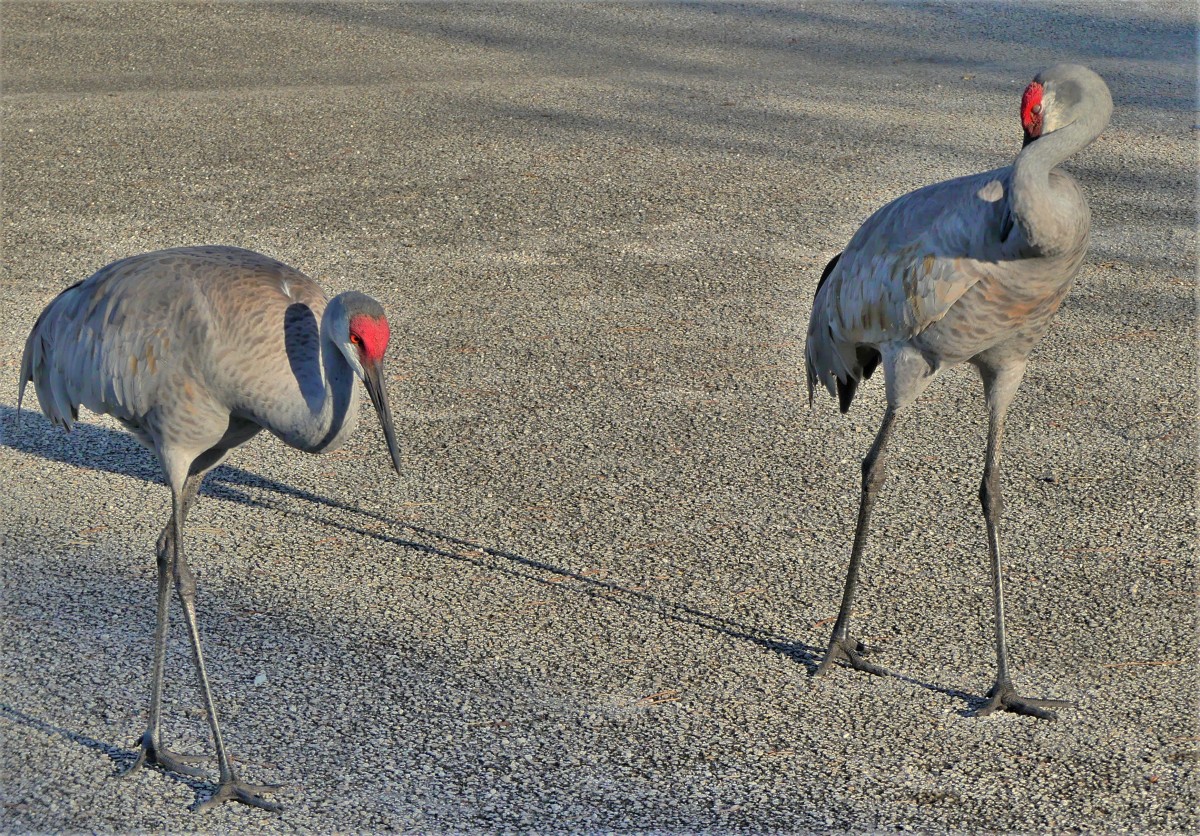 Apparently, resident Floridians were already deep into their hibernation cycle, as there wasn’t a single car in the lot, or maybe this was the hike that everyone avoids, for fear of over-exertion.

We spotted our destination from a distance,

and checked our water supply to ensure we were carrying enough to stay hydrated.

When we approached the trailhead, we stopped at the sign to get better acquainted with our surroundings.

“Are you sure you wanna go through with this?” I queried. “There’s no shame in pedaling away.”

“As long as we’ve made it this far, we should at least try,” Leah opined.

We set out along the boardwalk, traversing the planks, as we ascended the dune.

We trudged up the risers,

and caught a glimpse of our target. 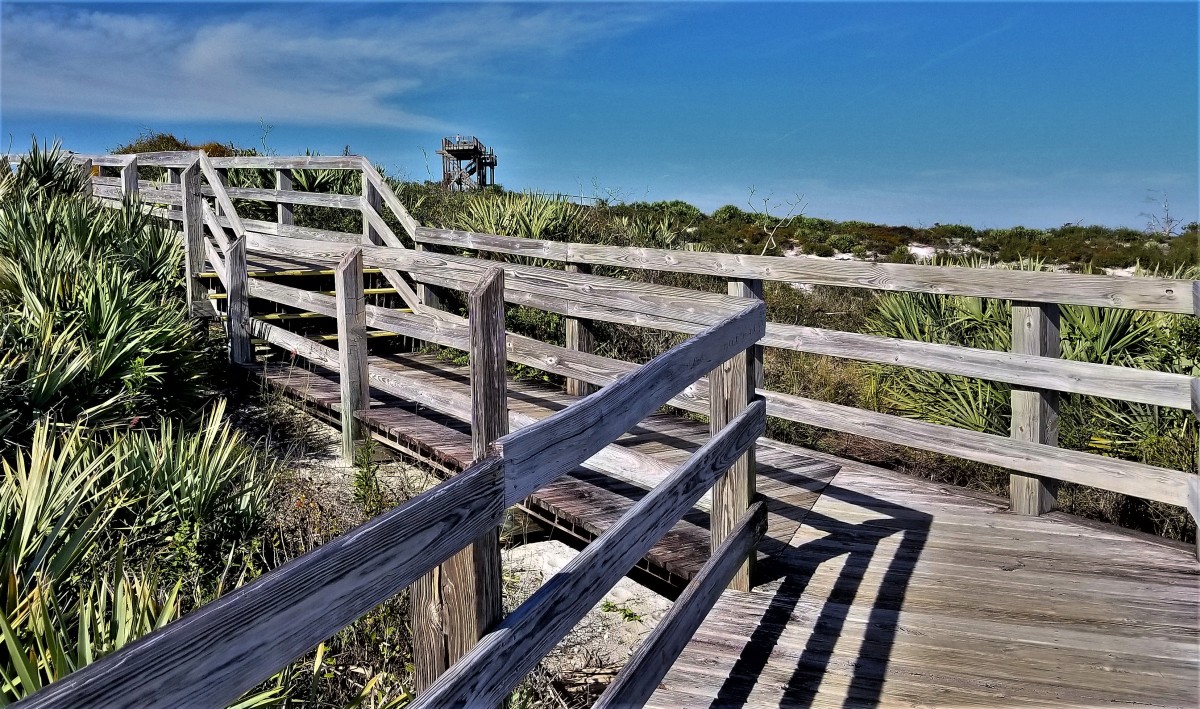 We were nearing the halfway point of our trek, and I couldn’t help but notice Leah’s shallow breathing. Thus far, she had been a real trooper; five minutes had passed since we’d started out, and she hadn’t once complained about her neck and feet. Although, I had to admit, my back and knee were beginning to throb.

Fortunately, the park mavens had wisely provided a bench just when we needed it,

giving us a chance to recover, and consider a different strategy for attacking the steeper second half of the hike.

We managed our steps more carefully,

pacing ourselves as we approached the tower. From a distance, it seemed so small, but now that we were standing so close, it towered over us. We paused for a moment to appreciate its pine leg supports, the efficiency of its screened porch,

and the sophisticated intricacy of its frame lumber construction. 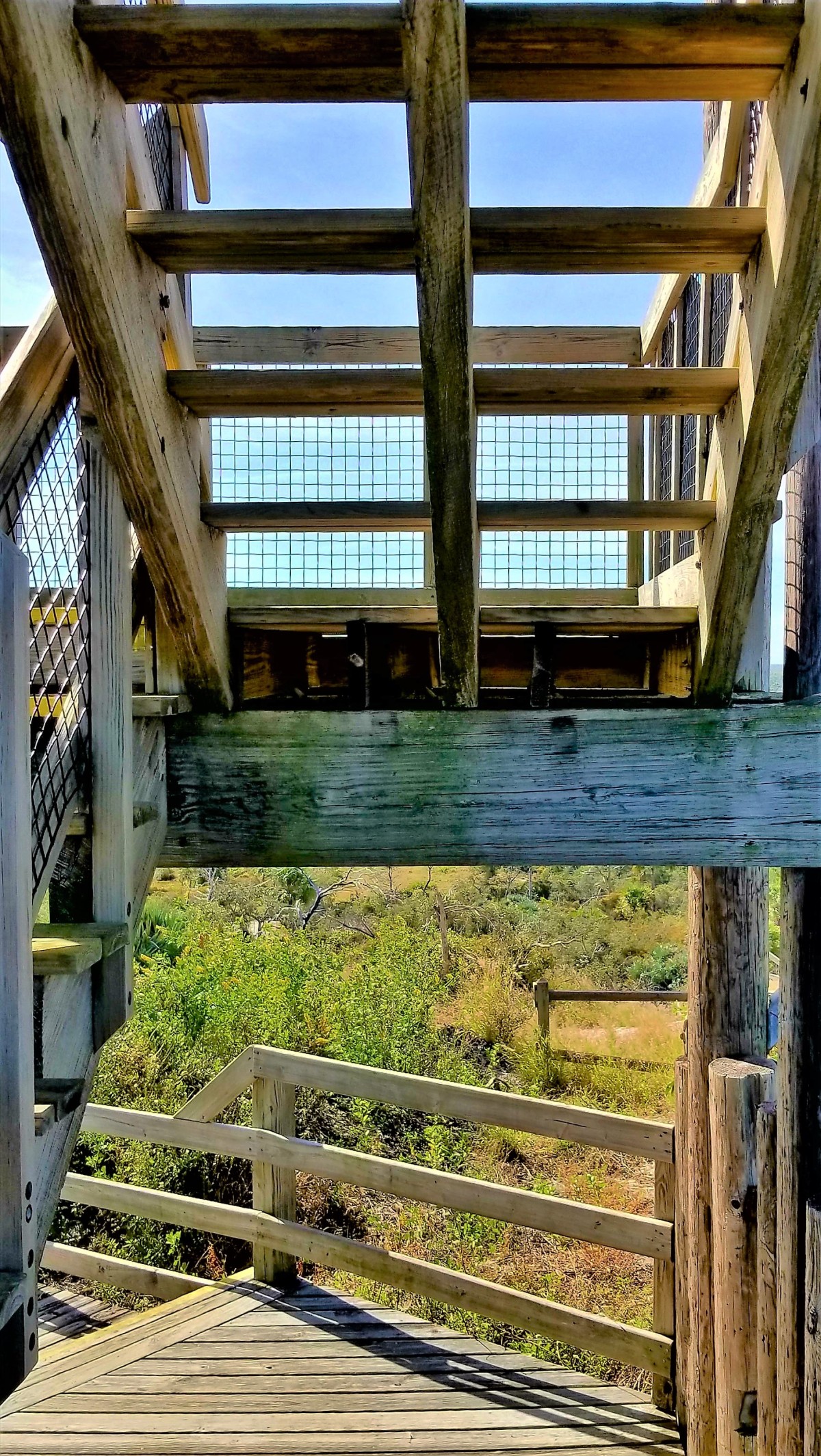 Leah and I took a long look back to see how far we’d come, and we couldn’t help but feel proud of our accomplishment. But it was too soon to gloat.

We still had to contend with the tower ascent.

“I’ll bet they have seats up there,” I predicted.

“That would be a good idea, because you never know when you might want to sit,” Leah exclaimed. 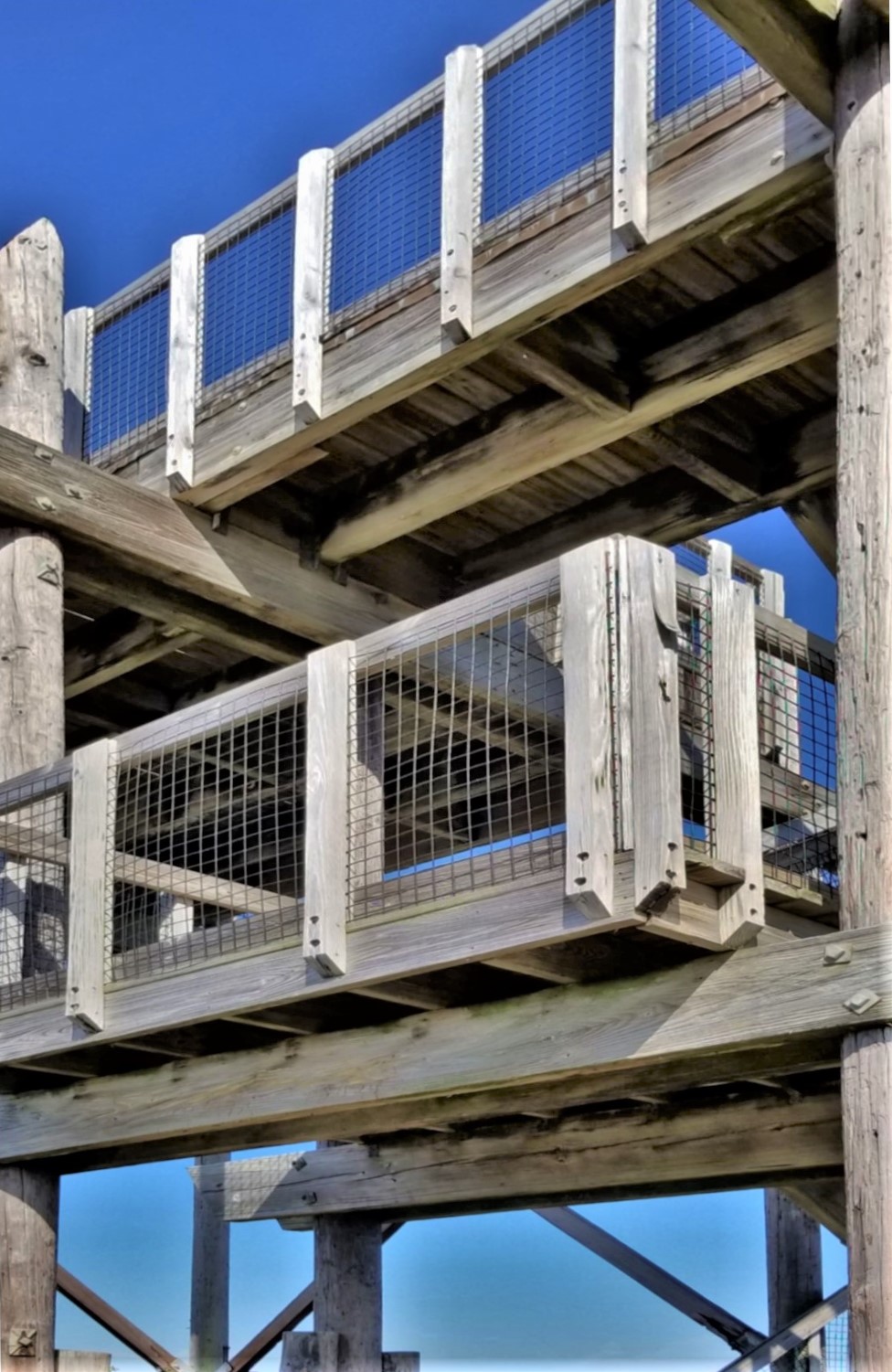 Climbing the stairs was faster than I expected; the adrenalin was coursing through our veins in eager anticipation of the view. Once at the top of the tower, the thin air and the expansive vista made us giddy with excitement. At 86 feet above sea level, we were on top of the world.

All that remained was retracing our steps back to the parking lot. But that would be easy, now that we were riding a Florida high. Although the naysayers would argue that it’s downhill from here.

8 thoughts on “Top of the World”