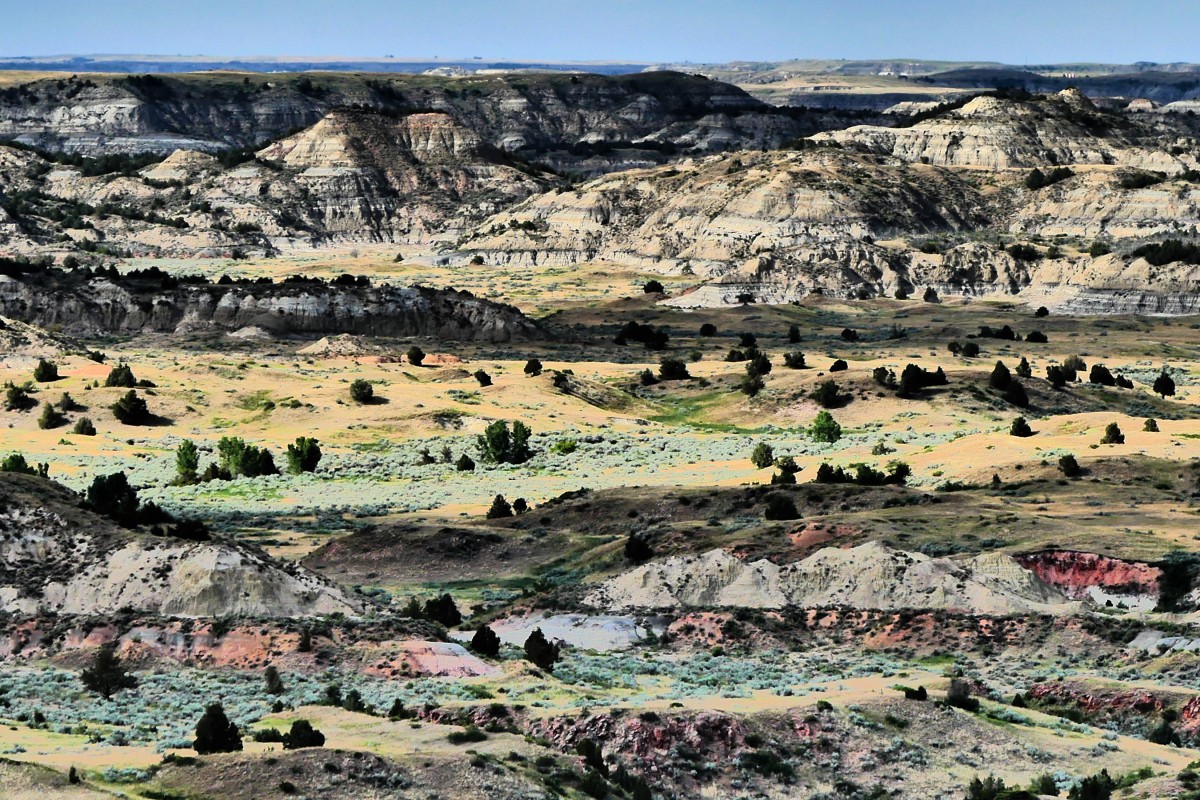 Sixty-eight miles north of Medora lies the North Unit of Theodore Roosevelt National Park. Leah and I had agreed that we would visit the North Unit on our second day. Although not nearly as inconvenient as reaching the North rim of the Grand Canyon–getting to the north from the south was an easy drive.

We wondered whether the North Unit of the park could possibly compete with the equine event experienced earlier within the South Unit. Many say the North Unit is more beautiful than its southern counterpart, but that’s too subjective for my tastes. And ranger consensus says there are more animals in these parts, but that’s arguable. And typically, the North Unit sees fewer visitors because its more remote, but today nothing seemed normal. In fact, the day was filled with oddity and  irregularity.

First of all, it’s odd that the two units of the park are disconnected. There’s plenty of fertile land between Medora and Watford City, ND. An infinite carpet of crops and pasture land is periodically punctuated by scattered herds of grazing cattle. But it’s what’s below the surface that really matters.

The Bakken Formation sits between the two park units, and is considered one of the most important sources of oil in the country, having already exceeded 1M barrels a day, and primarily responsible for the 2nd lowest seasonally adjusted unemployment rate across America at 2.5%. Oddly enough, oil derricks are actively pumping at the edge of the park, reaching two miles down and then across two to three miles to tap and sweep through the shale layer that holds the oil.

It’s also odd that five miles from the South Unit along I-94 East, the park service operates the Painted Canyon Visitor Center, which also doubles as an interstate rest stop with grazing bison. Weary truckers and families can stretch their legs along a log fence with protected views that will keep them from returning to their rigs. 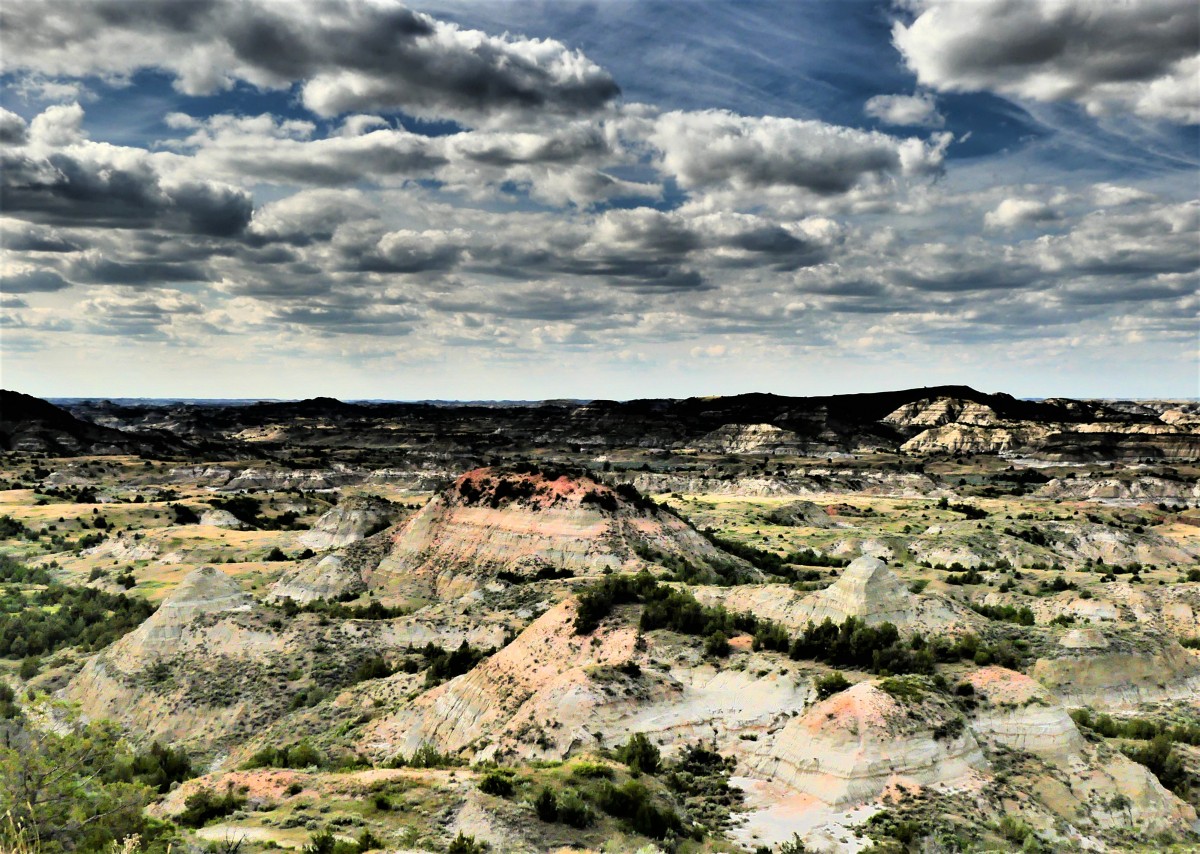 The saturated red hue atop the butte comes from bentonite clay having caught fire from a remote lightning strike. It burned for years, fueled by the coal vein within, eventually turning the clay to brick. 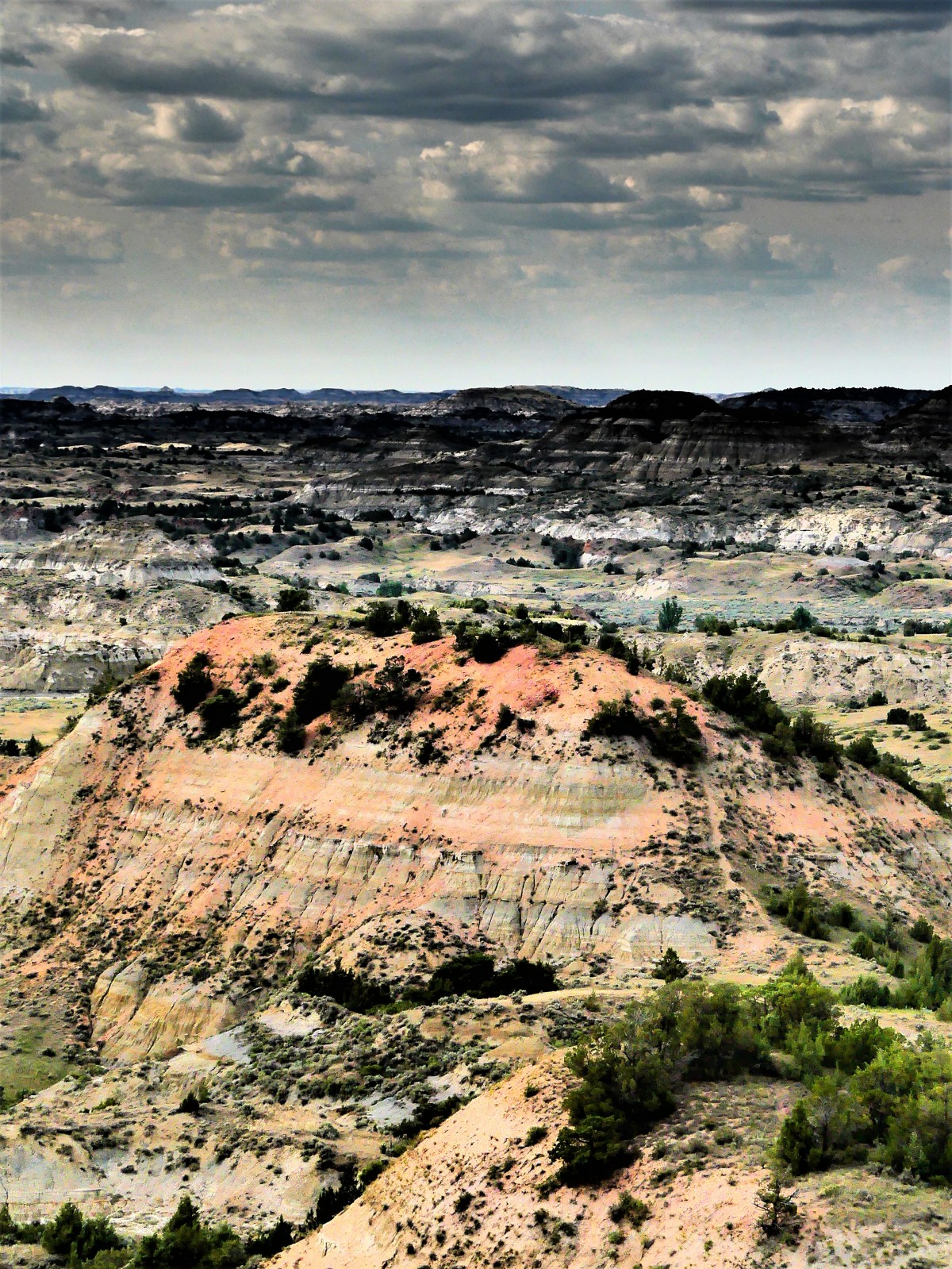 Another oddity: the two park units are in two different time zones! After driving north for half an hour, we lost an hour moving from Mountain time to Central time. Thanks to the transcontinental railroad, the southwest corner of North Dakota is caught in Mountain time, while the rest of the state operates one hour later. Nowhere is this more apparent (and confusing) than inside the park, and it’s weird.

Once at the North Unit, we came upon twin trailers taking the place of the regular visitor center. Ranger Jeff explained that “Badlands soil unpredictably shifted from drainage, and caused the foundation to slip and crack.” Consequently, the building was condemned and demolished in 2015, only to be replaced by a double-wide until new construction has been completed. Not exactly inspiring parkitecture. 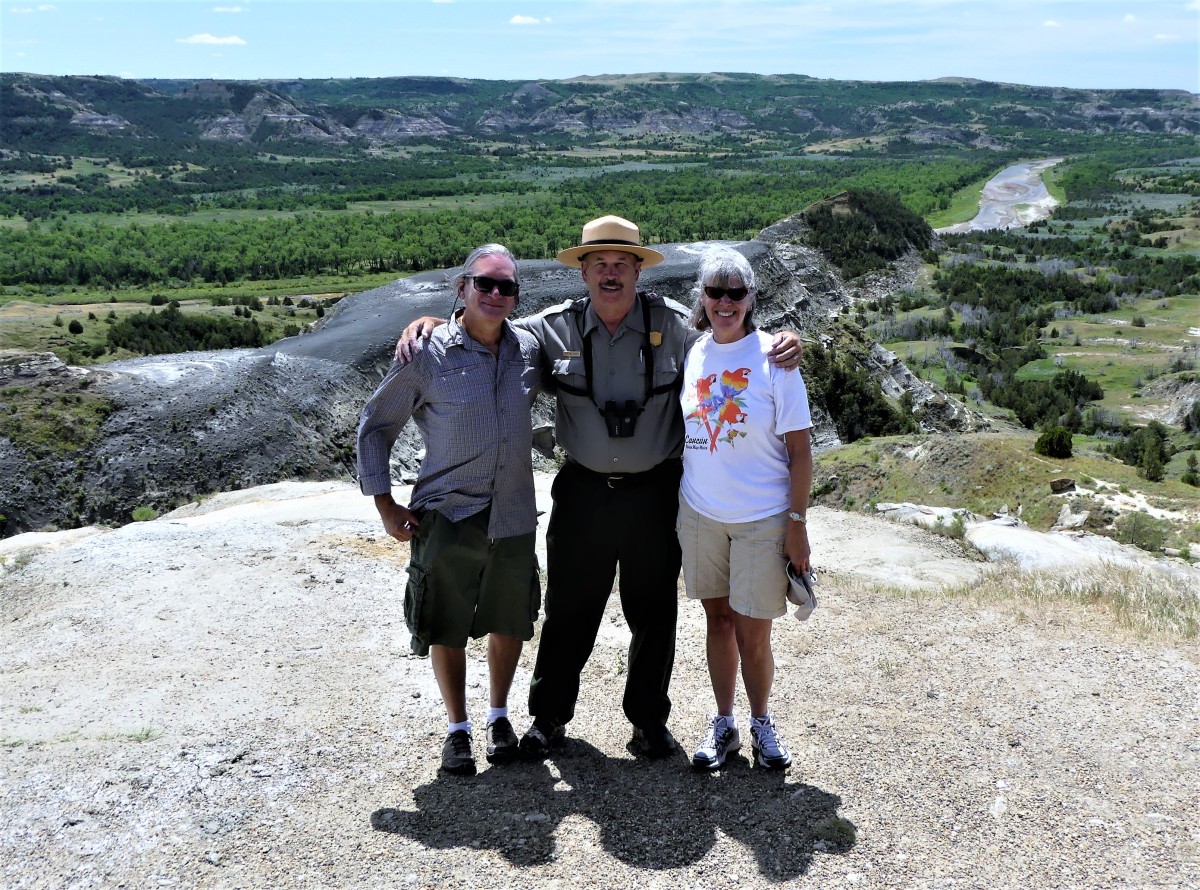 Unlike the South Unit’s scenic drive, which loops around for 36 miles, the North Unit road terminates after 14 miles with fewer turnouts. The first half of the road traces the Buckhorn Trail and intersects with Battleship Butte…

…where round concretions (compact aggregates of minerals leached from Little Missouri groundwater) called “cannonballs” have eroded out of the mountainside and accumulated at the base of the cliffs. I think they’re oddballs and wildly out of place, but nature put them there to be admired. 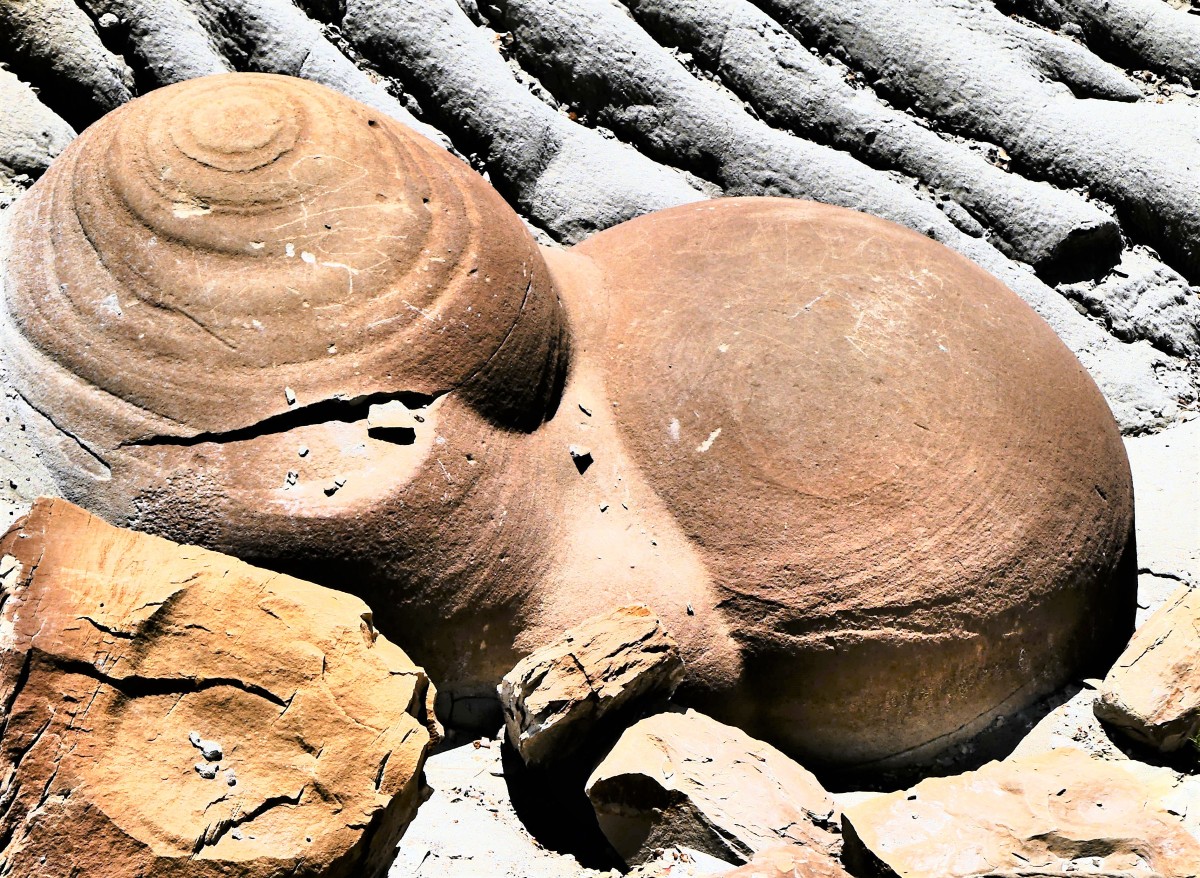 However, the oddest part of the journey was driving 1800 miles from home, only to run into our ex-neighbors at the River Bend Overlook.

Marjorie and Bruce, who lived just a few doors down the street from us in New Jersey had come to visit her sister Patricia and husband, who live in northeast Montana most of the year, but winter in Delray Beach, FL, around the corner from my dad’s residence–making this the smallest of small-world stories.

Upon completing the scenic drive to Oxbow Overlook… 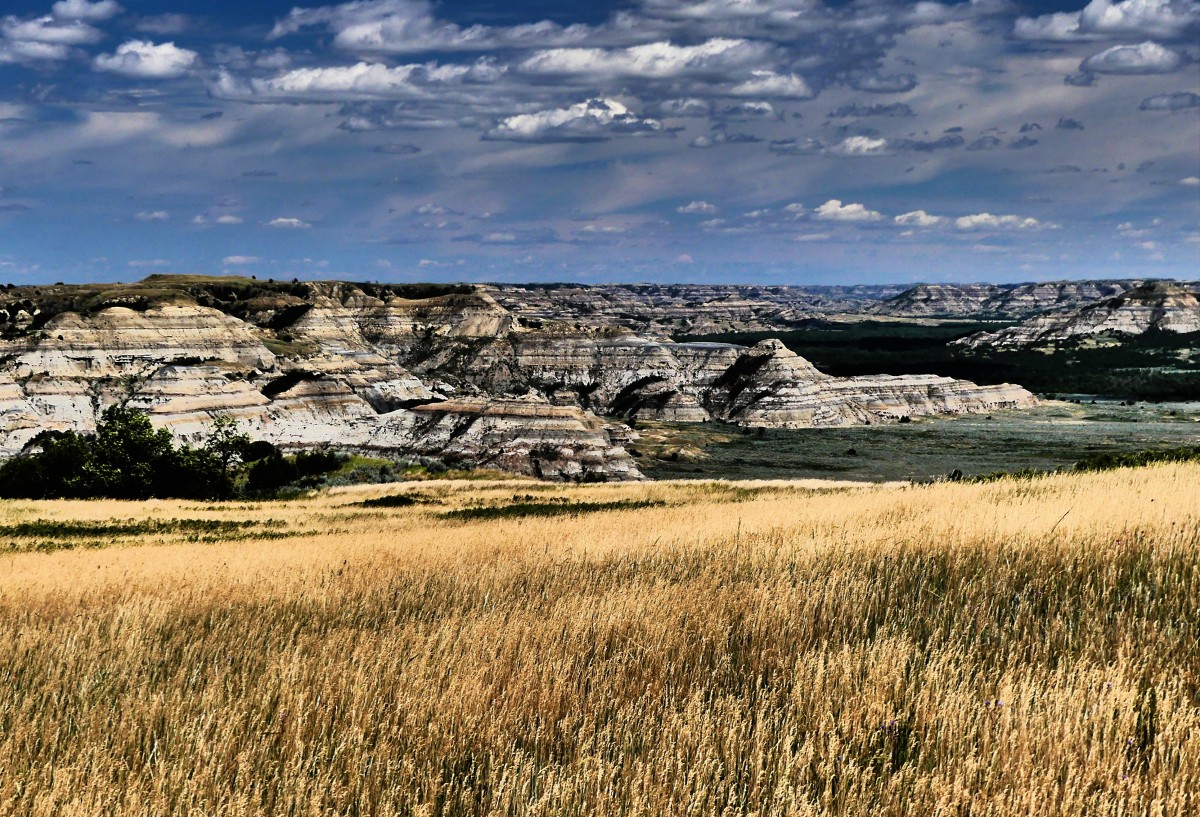 we saw no animals–only traces of what gets left behind. A demonstration herd of Longhorn steer was nowhere to be found; a band of bighorn sheep went missing; there were no elk; and not a single bison was sighted.

From Oxbow, we hiked along a very narrow trail to Sperati Point, avoiding bison poop every step of the way, yet thinking that a photo of bison on a cliff against a blue sky would make a perfect National Geographic cover. But when we arrived, it was only the distant hills before us…

And that would have to be enough, as we contemplated what’s been normal about our trip up until now.