Two weddings were scheduled today, and we weren’t invited to either one of them. To be fair, we didn’t know the brides and grooms or their families, but for now, to view the main sanctuary of the cadet chapel of the United States Air Force Academy, we would need invitations to their weddings.

All we could do was watch the guests file past us to witness a marriage between academy graduates, 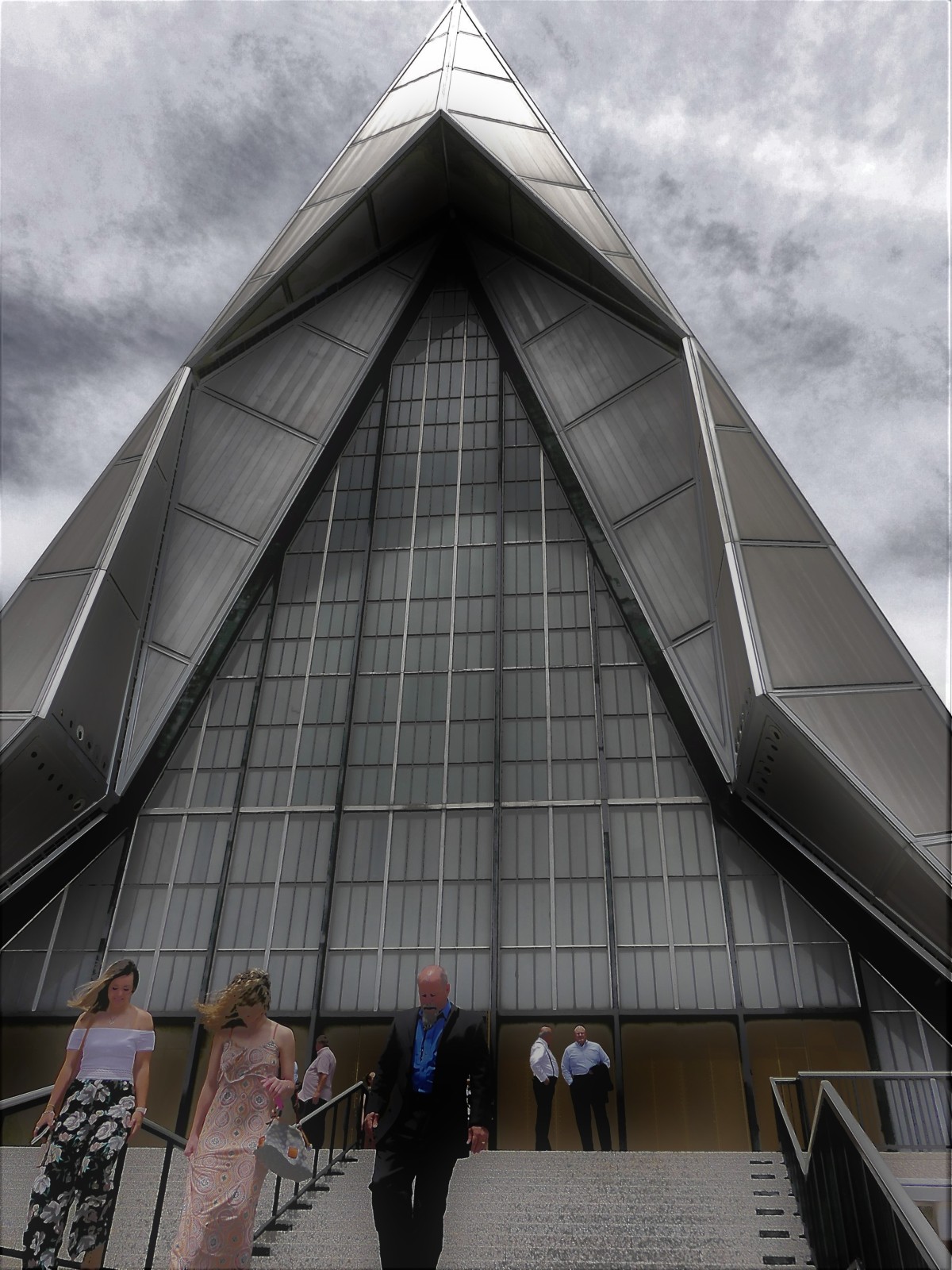 while the rest of us–visitors and tax payers alike–stood outside, trying to imagine a ceremony staged under the soaring lines of this ethereal cathedral.

Time and again, the misinformed and uninvited would climb the stairs to the cathedral entrance, only to be turned away by Ret. Captain Richard Mosbach, class of 1964. “But we came all the way from New Jersey to see this chapel,” Leah implored. “I guess today wasn’t the best day to visit.”

Capt. Mosbach tried redirecting. “Probably not. I was surprised about the day’s schedule when I arrived. I was expecting one wedding today, but not two. So for that reason, the Protestant chapel is closed to the public. However, there are other beautiful chapels on the lower level that are available for viewing.”

It was disappointing. While the chapel’s presence is so dominant and dramatic across the campus landscape, it’s really the interior that sets it apart from being a vertical stack of seventeen tapered arrowheads…

pointing to the heavens.

Reluctantly, we followed signs to the ancillary chapels beneath the looming aluminum panels. Ground level is home to a Catholic chapel, a synagogue, and a recently dedicated Buddhist temple. Additionally, a Muslim reading room occupies the chapel basement. Square footage has been appropriated according to academy demographics: 400 Catholic parishioners, 100 observant Jews, and 25 chanting Buddhists. 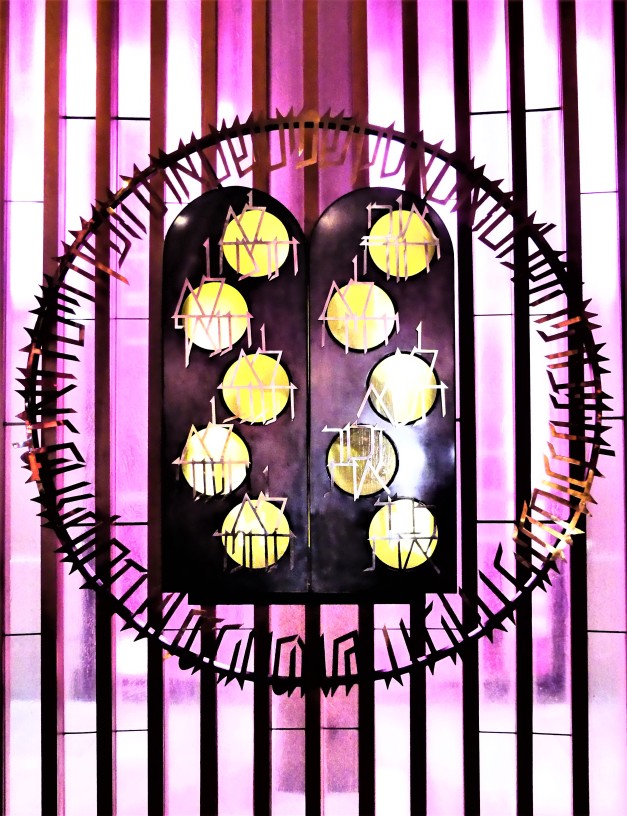 We happened upon an impromptu lecture/sermon delivered by the Academy’s Jewish chaplain emeritus, and foremost authority on the nine priceless Shlomo Katz paintings of biblical depictions that line the temple’s circular hall.

All of it was special, but still, it was the Protestant Chapel we came to see. Leah and I ventured around the perimeter of this revered and Historic Landmark, 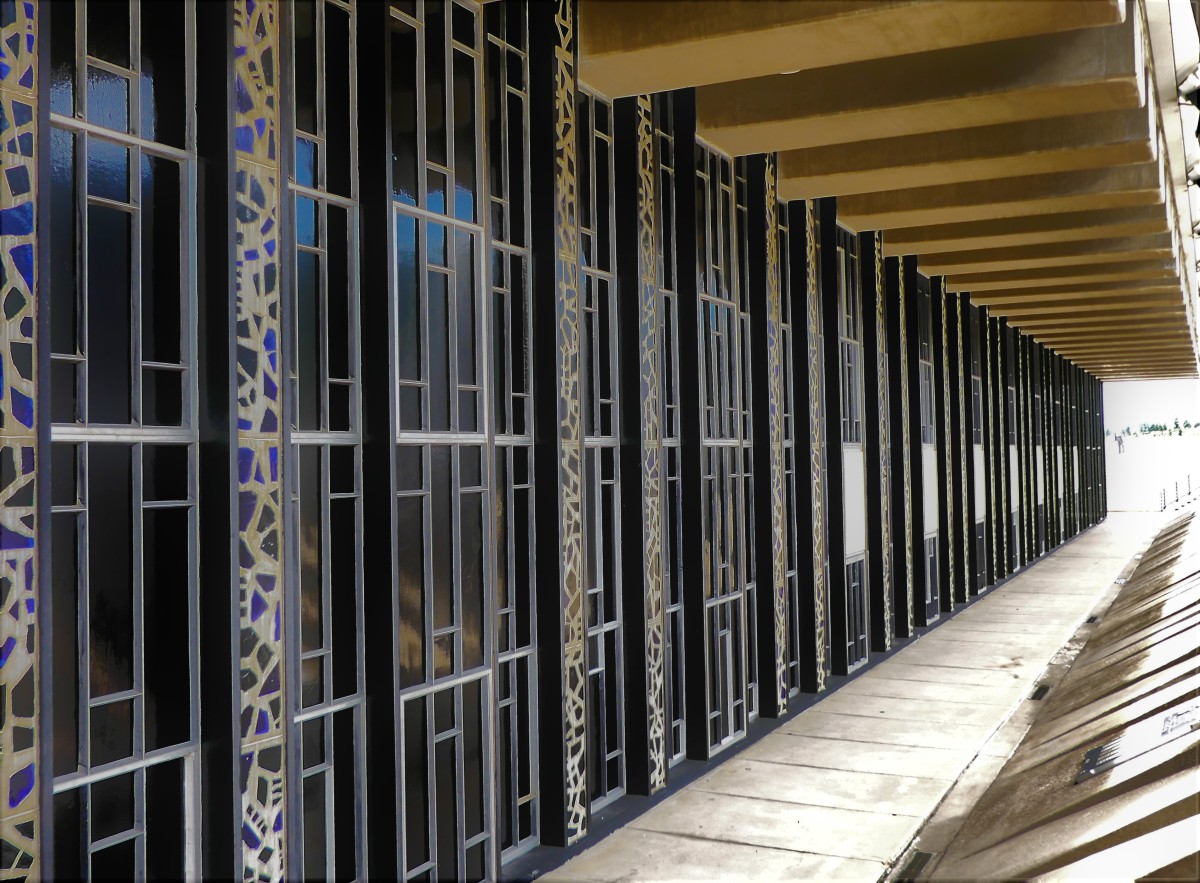 and surprised Beth and Ivy–two of the bride’s cousins hanging out by the handicap access–sharing a cigarette and some giggles.

“Don’t worry. You’re secret’s safe with me,” I reassured. “All I ask in return are invitations for us, so we can see the inside.”

Leah continued, “We came all the way from New Jersey to see the chapel, and I guess today wasn’t the best day.”

“Do you want me to take a picture for you?” offered Ivy.

I’d never met this girl before, and I couldn’t tell you if she was a reliable and responsible person, but on the spur of the moment, I shed my Lumix from around my neck, and handed it to Ivy without hesitation. I preset the camera to auto-focus and auto-exposure, and showed her very basic operation functions, before sending her off to document the chapel interior.

That’s when Capt. Musbach approached us for the second time. “I see you’re still here, and you’ve made a connection with the wedding party. Follow me!” he ordered.

He took the inside stairway to the back entrance behind the altar, and led us out to the edge of the chapel’s first arch. Beth and Ivy met us behind the wall to return my camera.

“I think I got some really cool shots for you. Do you wanna see?” she gushed.

“That’s okay. I’m certain whatever you shot has to be better than anything I was unable to shoot,” I confessed. “Thank you so much,” I intoned while replacing the camera around my neck, “And your secret’s safe with me.”

We stood in awe, bowed by the beauty of the chapel’s simplicity within the context of it’s complex geometry. We chatted with Capt. Mosbach for twenty minutes under the cool glow of sky-lit stained glass. As one of five volunteer docents who “works” every Tuesday and Saturday, he fed us factoid after factoid about the cadet chapel, making it abundantly apparent about this allegiance to the Academy, his fondness of the campus, and his affinity for sharing personal and academy history with strangers like Leah and me.

Just asking a simple question about the pipe organ housed in the choir lift at the top of the nave begets a five minute discourse about the 83 ranks and 67 stops, controlling 4,334 pipes.

However, more than 200 pipes don’t work due to continuing water damage caused by stained glass tiles that have leaked since the dedication in 1963. 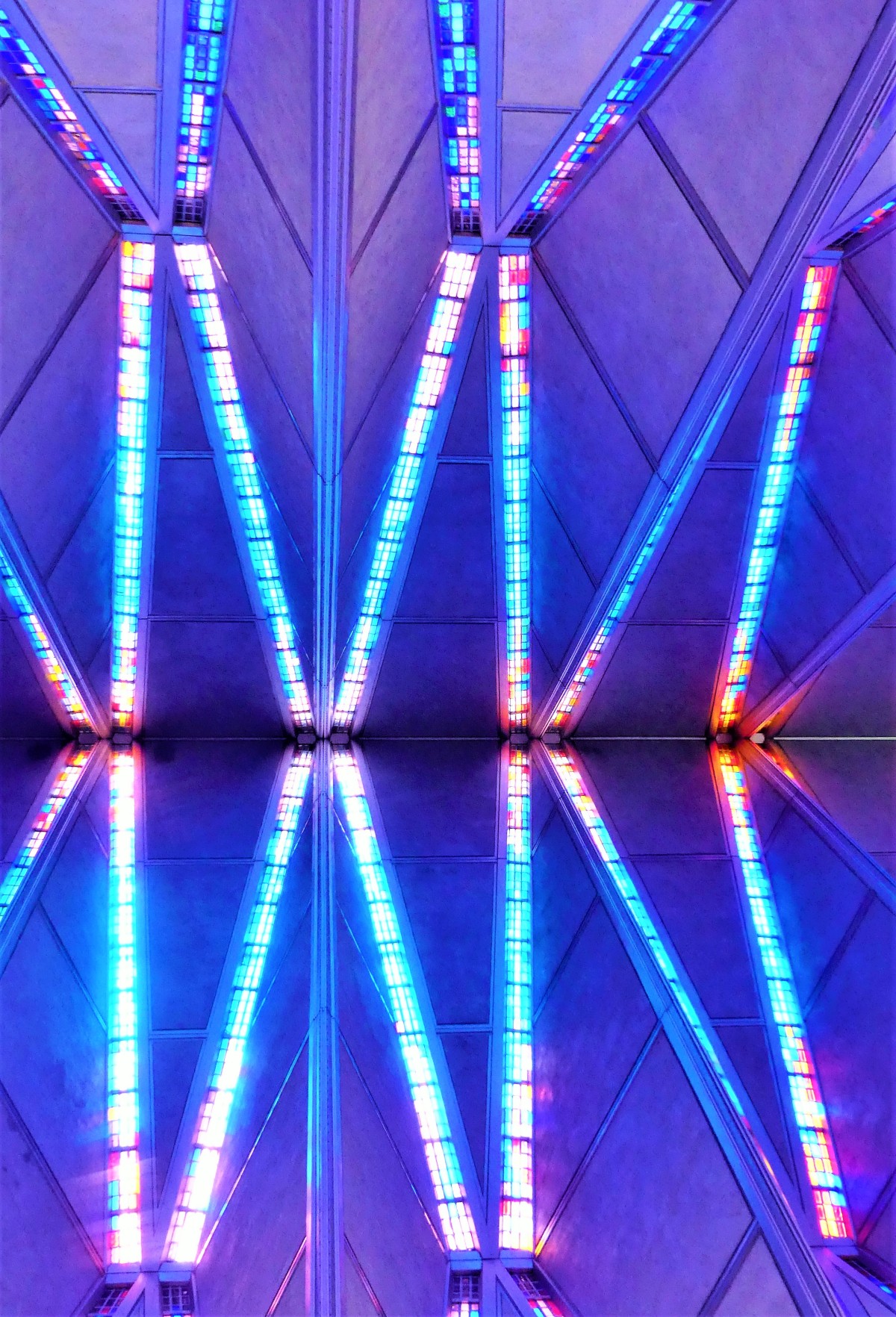 Just as Capt. Mosbach was expounding on the the controversy surrounding Walter Netsch’s modernist design–when first unveiled by Skidmore, Owings, and Merrill in 1958–a couple of tourists arrived at our location with the intention of looking around.

Capt. Mosbach immediately switched over to door security protocol, and stated emphatically, “This area is closed to all public traffic while a wedding is in progress. So you’re going to have to leave, please.” Then he returned to his story, never missing a beat.

After fifty-five years of hosting weddings and ceremonies, the cadet chapel is to be shuttered at the end of 2018 for a complete interior overhaul. However, the chapel’s exterior will continue to remind us that man-made monuments are no less inspiring than the mountains that surround us, and can be a great catalyst for kindness.

Our thanks to Beth and her cousin Ivy who provided the photography below, and to Ret. Capt. Robert Mosbach who brought the pictures to life.

3 thoughts on “Going to the Chapel of Love”