What a difference a day makes. Leaving Zion behind for Bryce Canyon gave us cooler temperatures, cooler tempers, and cooler views–now that we left the maddening crowd behind and were no longer limited by what we could see (Keeping an Eye on Zion).

After driving two hours through riveting scenery along 89 North, we arrived at a KOA in Cannonville bordering on the edge of nowhere, approximately 20 minutes past the National Park. We dropped the trailer and headed back to the park to get our nature fix. We followed the 18 miles of park road to its conclusion, and walked the Bristlecone Loop Trail, a thousand year-old alpine forest where the remains of a 1600-year-old bristlecone stands watch at the edge of Yovimpa Point,…

offering panoramic views of the Colorado Plateau going as far back as the Grand Canyon’s North Rim. Clear days at Bryce can offer the longest views anywhere on the planet–beyond 100 miles away, thanks to the amazing clean air quality. 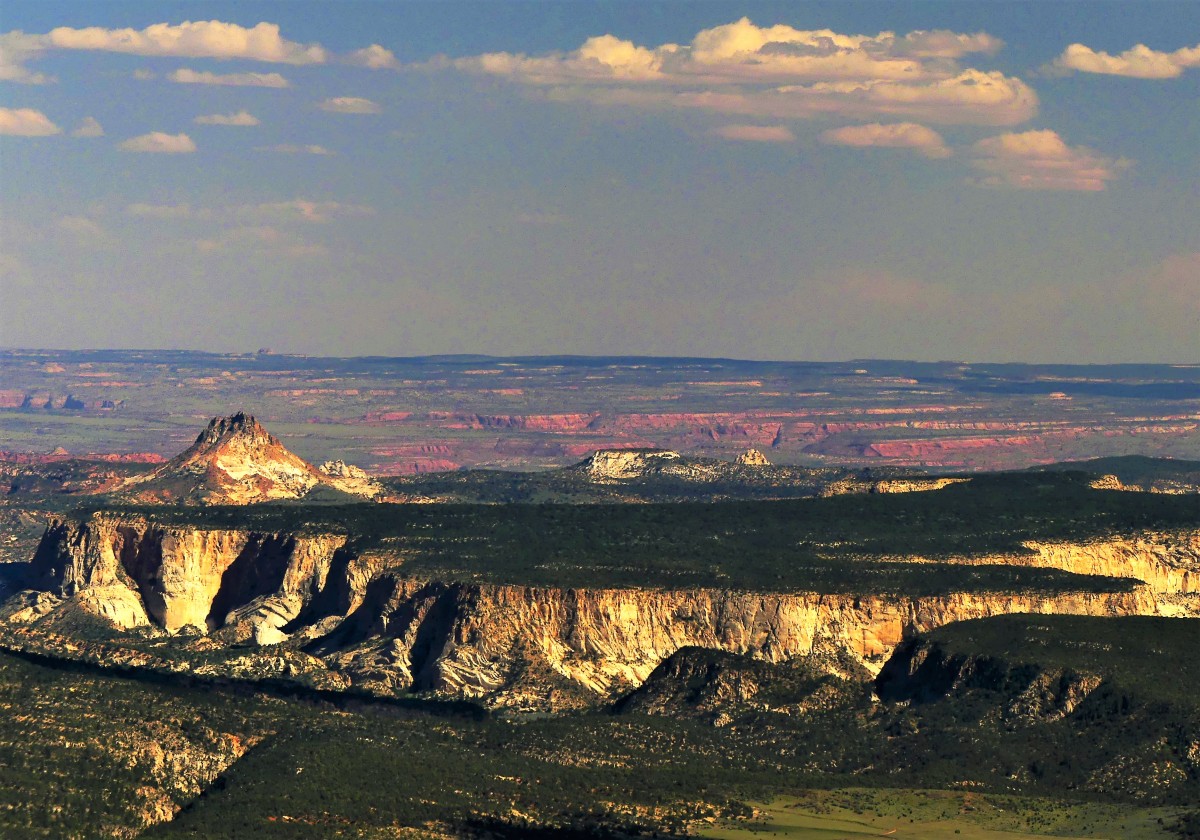 But it was the Rainbow Point lookout around the other side of the ridge that put smiles on our faces and brought the color back to our slack-jawed cheeks, giving us an early preview for the next day’s hike. 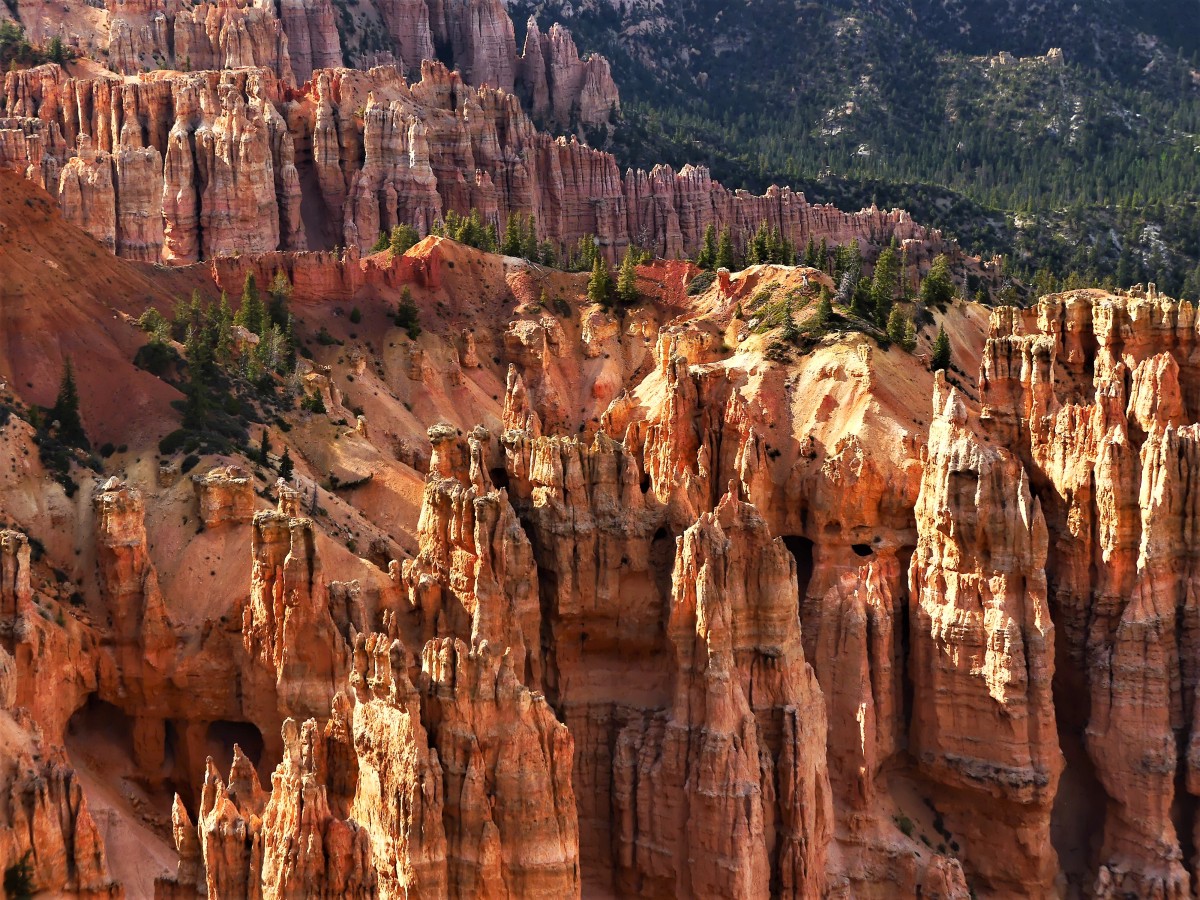 It was our first look at Bryce Canyon’s hoodoos–the world’s largest collection of stone chessmen formed by ice and water erosion–and they were magical.

Working our way back, we stopped at one of many scenic overlooks hugging the road side. Looking over a log rail, seemingly within arm’s reach was a formation called the Natural Bridge, an 85 foot span that is really a natural arch. So why it’s called one thing when it’s really another makes it just a bit confusing. Is it a bridge that’s an arch, or an arch that’s a bridge?  Ask a ranger and you’ll get two different answers. Okay?

After pull-overs at Sunset Point and Sunrise Point, we were certain that the next day’s hike should take us deeper into the Amphitheater for a more intimate and detailed experience. 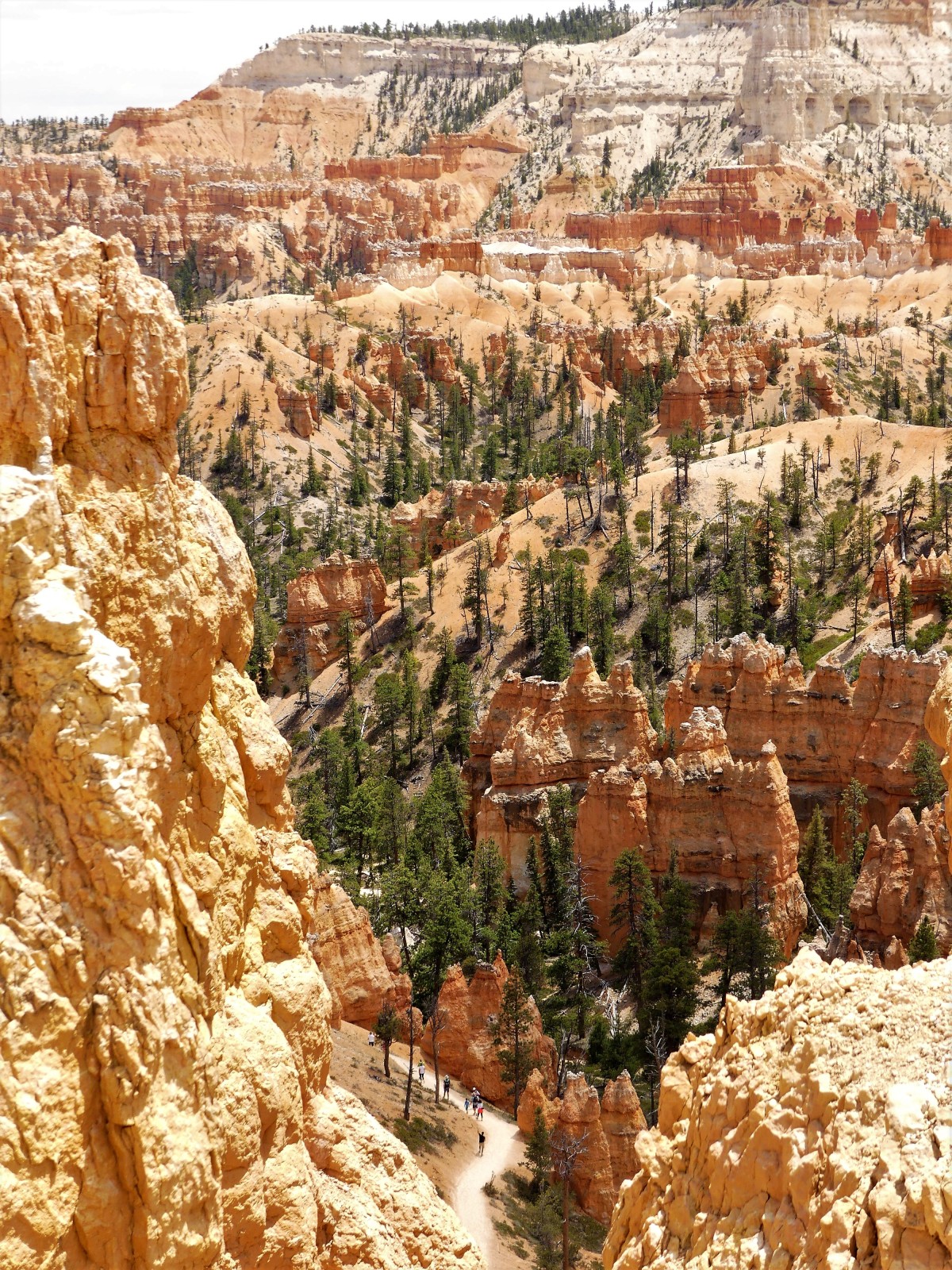 Passing through Tropic, Utah on the way to KOA, we detoured for groceries and a visit to TruValue Hardware to possibly resolve a nagging situation since we left New Jersey: how to adapt a quick connect hose between our Weber Q 2200 LP grill and the Airstream’s LP service port.  While it may appear mundane to the average urbanite, the ability to bypass the LP tank, and connect directly to the trailer makes it a no-brainer and a classic time-saver for RV set-ups.

Thus far, at every newly arrived location, I’m constantly reminded of the additional time required to set up the grill, when I know my time could be better served by drinking a cold beer or replying to reader comments from a blog post.

Whether the weathered attendant behind the check-out counter could help me remained to be seen. I clearly demonstrated to him how the hose to the Airstream port and the fitting coming out from the grill needed a compression union to make the desired connection, and what I got instead was a lecture.

He led me to a wall of grill accessories and told me that what I was looking for was impossible to find, and I was better off buying his $65 kit to connect my grill directly to my tank.

“But I already have that,” I objected. “That’s how I do it now. I’m looking to circumvent the tanks and draw LP directly from the trailer through the quick connection. This part of the hose (I wagged it closer for him to see) feeds directly into the trailer,” I implored.

“Well, I’m gonna tell ya,” he started, “and you’re probably not gonna like the answer, but those damn Democrats, especially Obama made it impossible for you to do what ya wanna do.”

He paused, waiting for a reaction–maybe to take my political temperature, but I let out a little more rope. “I don’t follow you,” I  reasoned.

“Well, Obama spent eight years in office loading down OSHA with more and more rules and regulations, that you practically need a doctor’s note just to take a shit,” he claimed. “Maybe, you come back when there’s not so many rules.”

Leah arrived in the middle of our transaction holding groceries, and heard part of the exchange. “Let’s go! We gotta get back to refrigerate the milk.”

I left the hardware store in disbelief; it was like a Twilight Zone moment. “How does he stay in business?”

“He doesn’t need your money. Remember, this is Trump country,” she asserted.

All of yesterday was forgotten, when the next day we dropped into the Amphitheater from Sunset Point,

through the Navajo Loop Trail following the steep switchbacks…

to Wall Street, where enormous Douglas firs have balanced in the rift for over 750 years, like sacred totems, 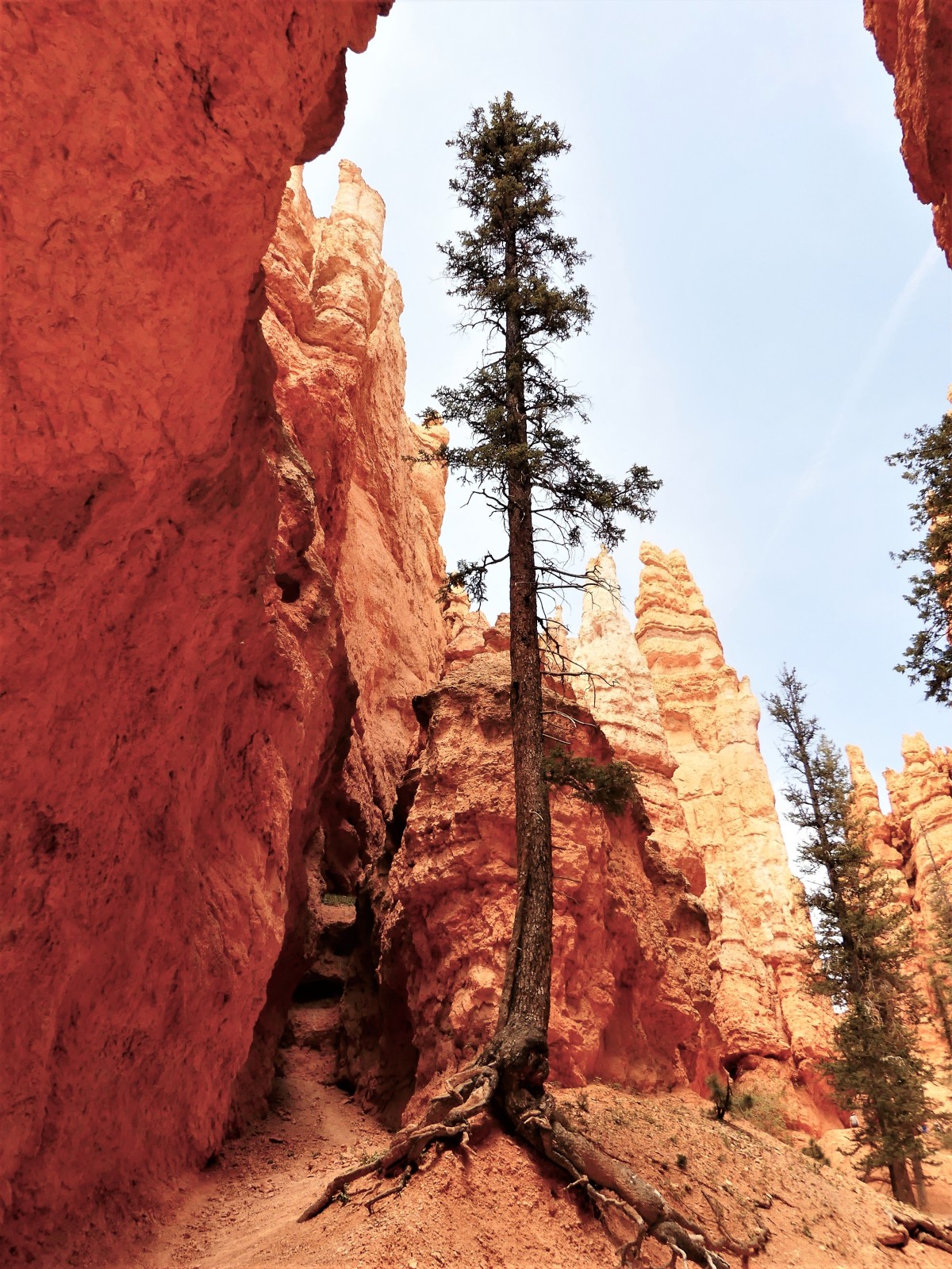 and views of Thor’s Hammer are something to “marvel”. 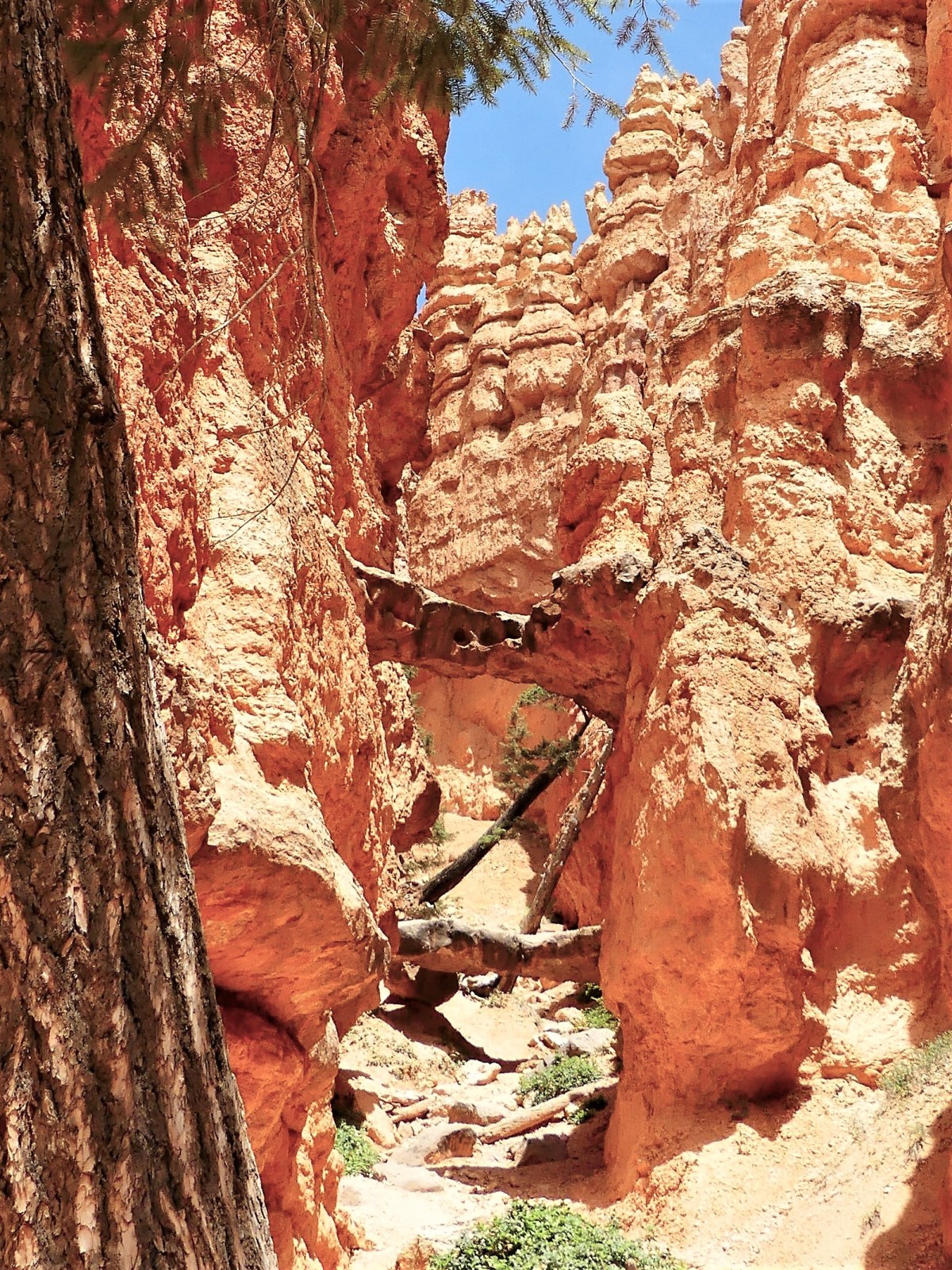 another series of switchbacks dropped us to the Amphitheater floor. Rather than continue the loop, we opted to cross into Queens Garden, for cake and a spot of iced tea.

Along the way, we met the Queen’s subjects…

standing along side the Queen’s castle… 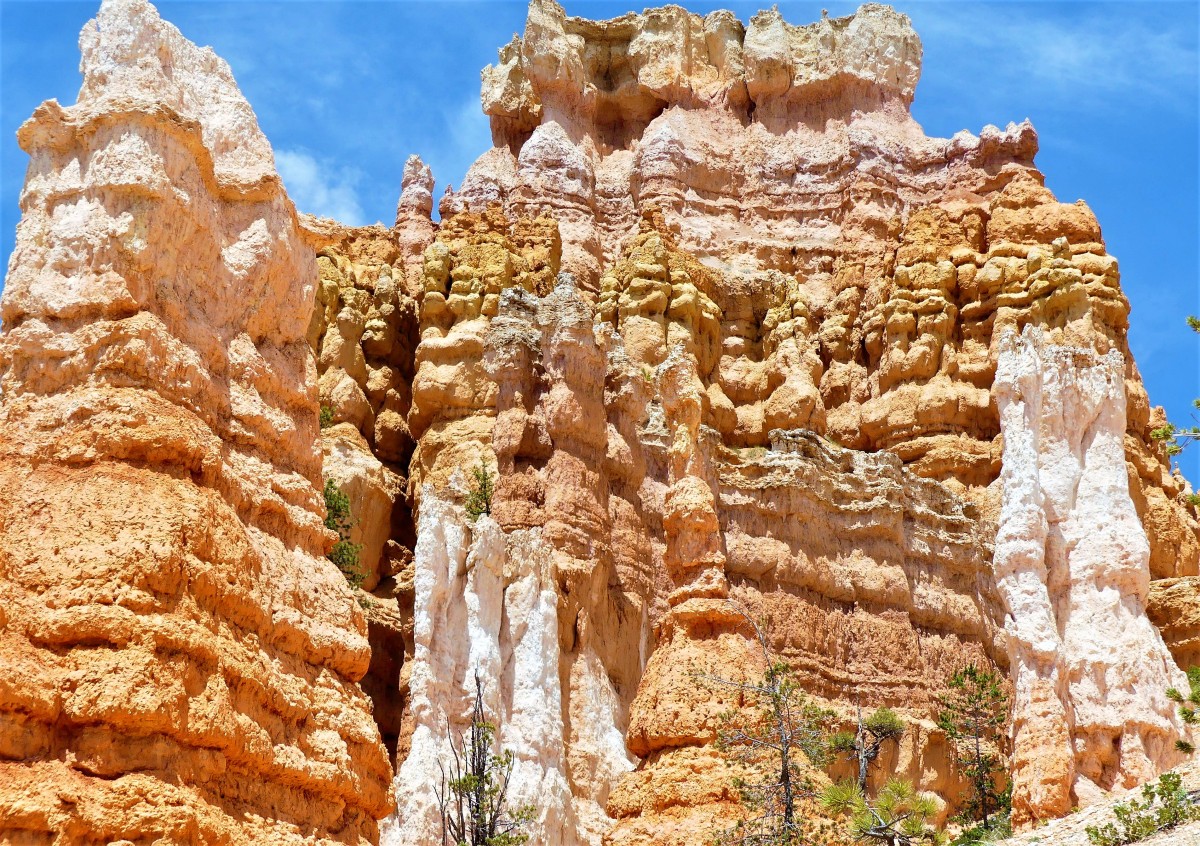 as Queen Victoria looked on high.

It was a “monumental” hike out of the canyon that left us tired, but enthused by the energy surrounding us. Perhaps it was hoodoo voodoo?

But one thing that we both agreed on… we were ravenous after spending time in this imaginary Fairyland world. 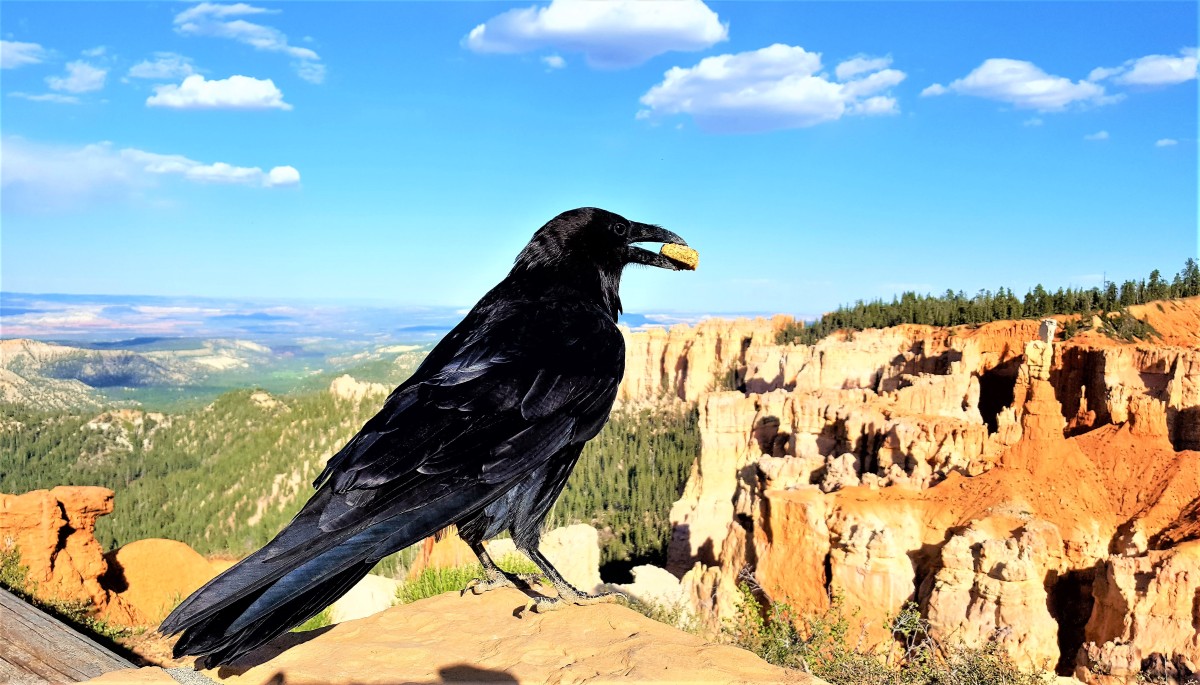 But dining out in Cannonville, UT can be a bigger challenge than hiking the Bryce Canyon rim trail. With only two food vendors in a town with a population of 168, we chose i.d.k. BBQ, a food truck with limited acclaim from social media. I don’t know how they got their name, but it was the only game in town, so we thought we’d take a chance.

Originally, Leah was skeptical. “BBQ in Utah?” she doubted. “From a food truck, in the middle of nowhere?… Really!!? Remember, there’s only one toilet in the trailer.”

“Why not?” I countered. “How bad can it be? In a town this size, there must be someone who could cook.

But first we had to find this truck. After cleaning up from a day drenched in fairy dust, we were ready for a night on the town. Boarding the F-150, we literally turned the corner into “town”, and rode four blocks on Kodachrome Drive until we knew it was time to turn around. How could we have missed it?

We turned around to cover our tracks, looking hither and yon for any semblance of a food truck, until we came back to the same turn that carried us into town. Nothing… except the Sinclair station that reminded us that filling up was a good idea before we hit the road tomorrow.

“So what are we gonna do about dinner?” Leah asked.

I shrugged. Standing at the pump, I scanned the horizon, and spotted a flapping BBQ sign just pass the Sinclair stanchion. That’s when I spotted the truck tucked behind the corner motel.

Shades of Eat and Get Gas.

We rounded the corner of the truck, only to meet proprietors Emily and Kevin Clark and their four-year-old daughter cleaning up for the day.

Maybe it was our fallen faces, or maybe a little hoodoo voodoo, but Emily was soon offering us Kayla’s dinner in a closed container.

“What’s that?” Leah wanted to know.

“I feel bad about taking your daughter’s dinner,” I responded. “What’s she going to say?”

After exchanging $20 for a monster baked potato drizzled with cheddar cheese and smothered with a pound of pulled pork, with a side of cole slaw and two warm cups of peach cobbler topped with whipped cream, we drove back to the Airstream for one of the most delightful and serendipitous take-out meals since we pulled out of Jersey.

4 thoughts on “Hoodoo You Trust?”