Big Bend kicked my butte today, but it also offered the perfect remedy.

Just beyond the Chisos Basin turnoff, I pulled the F-150 onto Grapevine Road, a rocky and powdery six-mile approach to the trail head of our next adventure: Balanced Rock. Far from smooth, but never boring, the ride to the trail head was a struggle between watching where I was going and watching the ever-changing landscape through the driver-side window.

“Watch where you’re going,” Leah warns. To my ears, it sounds more like an admonition.

Over the past two month, I believe I’ve finally adjusted to driving the F-150–becoming more comfortable with its size; more reliant with its ability to haul and tow; and more familiar with all the technology built in by Ford. However,   unknown to me at the time I bought the truck is a pot-hole alarm that keenly scans the road terrain and sounds off when approaching a rough patch ahead; it’s a cool feature that’s intended as an alert to slow down and avoid the upcoming ditch when needed. While it’s worthwhile and dependable most of the time, the only way to disable it is to tell Leah to close her eyes.

Even through we’ve been off-roading for over a month now, I have hoped that Leah’s anxiety and criticism about my driving would have subsided by now. My defense is always the same.

“You’re welcome to drive anytime you like,” I offer, knowing how intimidated she is of the rig size.

“That’s not my job, that’s your job,” she always counters.

“So why are you complaining? We always manage to make it back alive, and in one piece!” I protest.

And her familiar rejoinder is always ready. “Well, maybe you won’t be so lucky next time!”

“Luck has nothing to do with it,” I say to myself.

Nevertheless, the ride is distinguished by all the outcropping of rocks so close to the road. There is so much to see that is awesome, that awesome becomes the new ordinary. 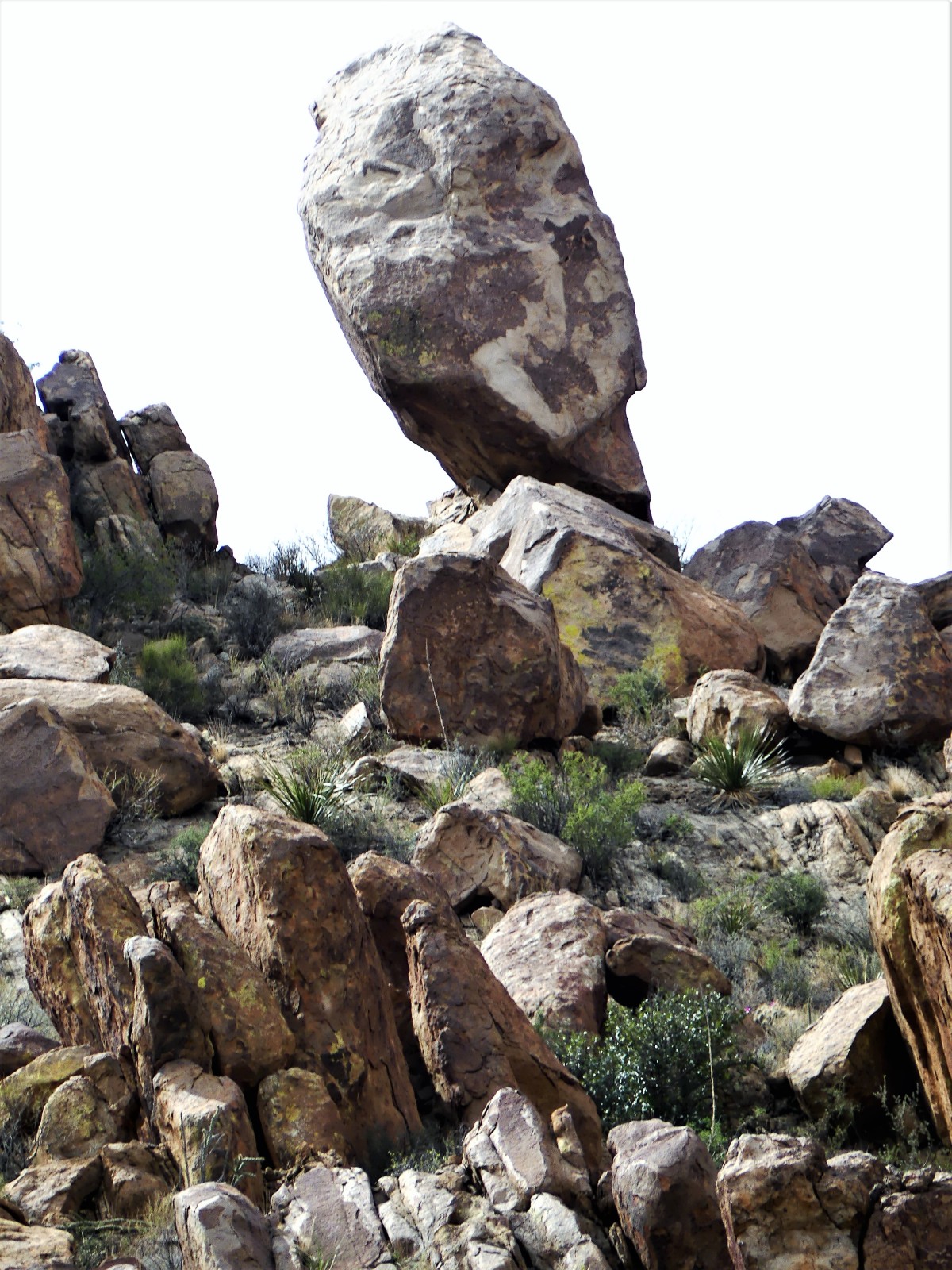 We soon arrive to a smattering of 4 X 4-worthy vehicles parked on a plateau beside the road. Not wanting to crowd the trail, I elect to drive by and continue on Grapevine Road to see where it leads.

“You missed the trail head,” Leah advises. Her tone now borders on admonishment.

“I know, I answer, “I just want to explore to the end of the road. It’s not that far from here.”

“How are you gonna turn around if the road’s too narrow?”

I am completely unaware of the “narrow road alert” feature on the truck until now. “I’m certain there will be a turnaround at the end of the road.”

“But you don’t know that for sure,” Leah continues.

When we get to the turnaround at the end of the road, we notice an occupied campsite with a blue pop-up tent and a folding chair. We both agree that this kind of camping is far too remote for the both us, and just like that, we’re on equal footing again.

I’m pleased to see that trail head parking has thinned out upon our return. The hike is considered moderate—a mild incline of desert terrain with a steep eighty-foot ascent at the end—but my right knee is acting up from a twelve-year-old skiing accident, and two subsequent arthroscopic interventions. All I can do is keep pushing forward, watching where I step and how I step.

“I thought you were gonna take some Aleve before you left,” Leah offered.

“But that’s not an option now, is it?” I say to myself. I never realized until now that the truck’s warning system comes with a mobile app extension. “I’ll just have to manage,” I reply aloud.

We arrive at the uphill finale, which is not as terrible as I had imagined. While rock scrambling is inevitable, the footing is reasonable.

Interestingly, the pain seems more tolerable the closer I get to the hike’s payoff, which in this case is spectacular—a distant mountain vista framed by a window of balanced rocks,

7 thoughts on “Ouch! and Ahhh!–Part One”