KT, our guide at Kadizora Camp gently rapped on our tent door at 6:30 am to accompany us to the dining tent for a continental breakfast. It was still dark, hence the escort. We were following a verbal command from camp personnel requiring us to stay put during darkness due to a heightened risk of encountering wildlife in our area.

Only last night at 11:20 pm, an elephant known to the camp as Franklin startled me awake by rubbing against the outside of our tent.

“Do you hear that?” I whispered to Leah.

“What is it?” she yawned, seemingly annoyed that I had interrupted her sleep.

“I think it’s an elephant.”

“What?!” she snapped awake.

“Whatever it is, it’s right outside our tent,” I said in my softest library voice.

As if on cue, Franklin’s massive silhouette lumbered along our raised deck, grabbing and tearing tree leaves with his snaking trunk as he filled the zipped screening with his immensity, leaving us paralyzed in awe until he was gone.

Damn! Where was my camera?

It was thrilling yet alarming to watch. Adrenalin pumped through our weary bodies, wiring every nerve and depriving us of much-needed sleep. Eventually, the continuing soft grunts of snoring warthogs under our tent provided the white noise we needed to lull us back to a peaceful slumber until our 6:00 am wake-up.

“Are you ready to see big cats today?” asked KT, his flashlight in hand.

“Absolutely,” I answered eagerly, as we followed him down the illuminated path to the safety of common ground.

“Did you have a visitor last night?” he wondered, already knowing the answer.

“An elephant bull-dozed the contractor’s tent last night. Turned it into a heap of broken sticks and canvas,” he said.

Once out in the bush… 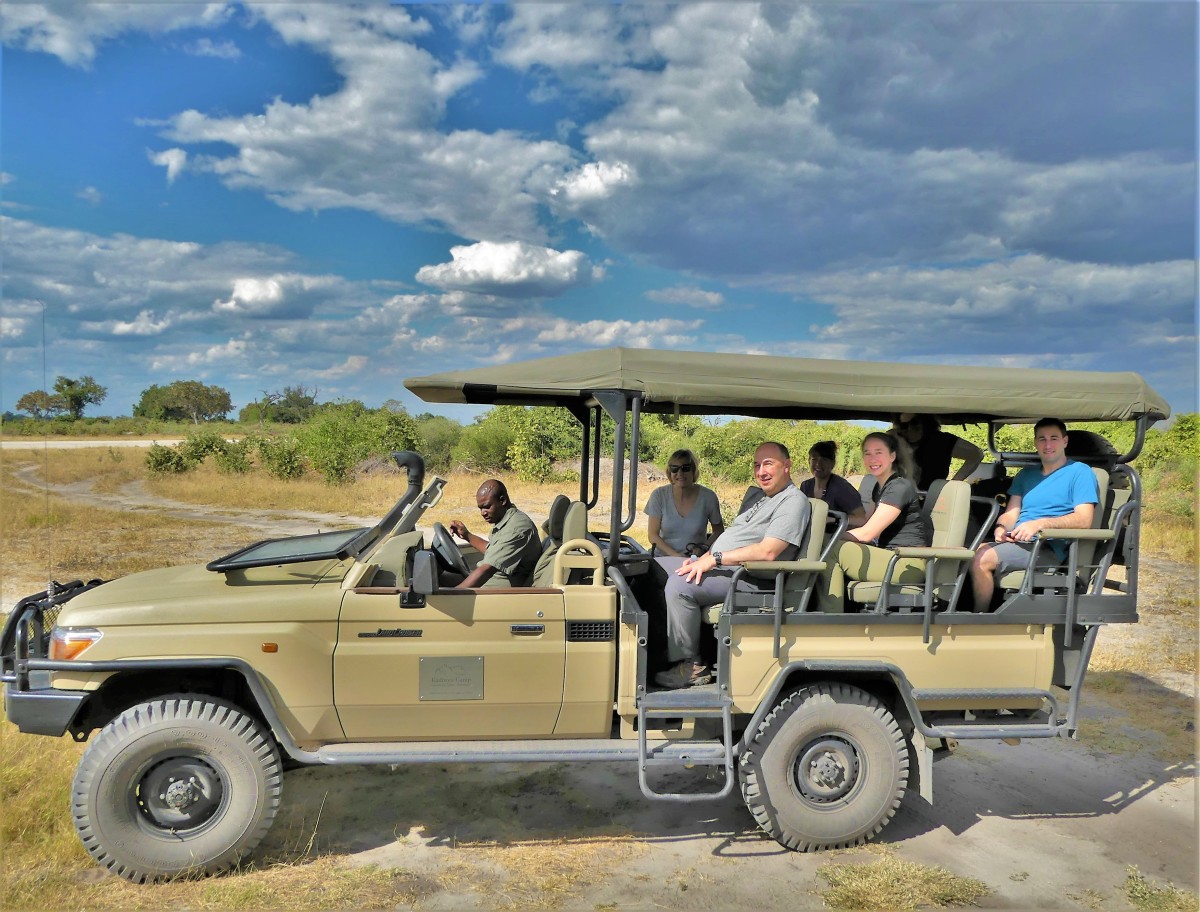 cruising along rutted ribbons of sand separated by tall grass,

we came across a small herd of Cape buffalo grazing…

that appeared to be pulling closer together, adopting a defensive posture.

“Those buffalo are nervous,” asserted KT. “Do you see how they all stare in the same direction? Most likely, they have picked up the scent of a lion or leopard, and they are closing ranks for protection.” 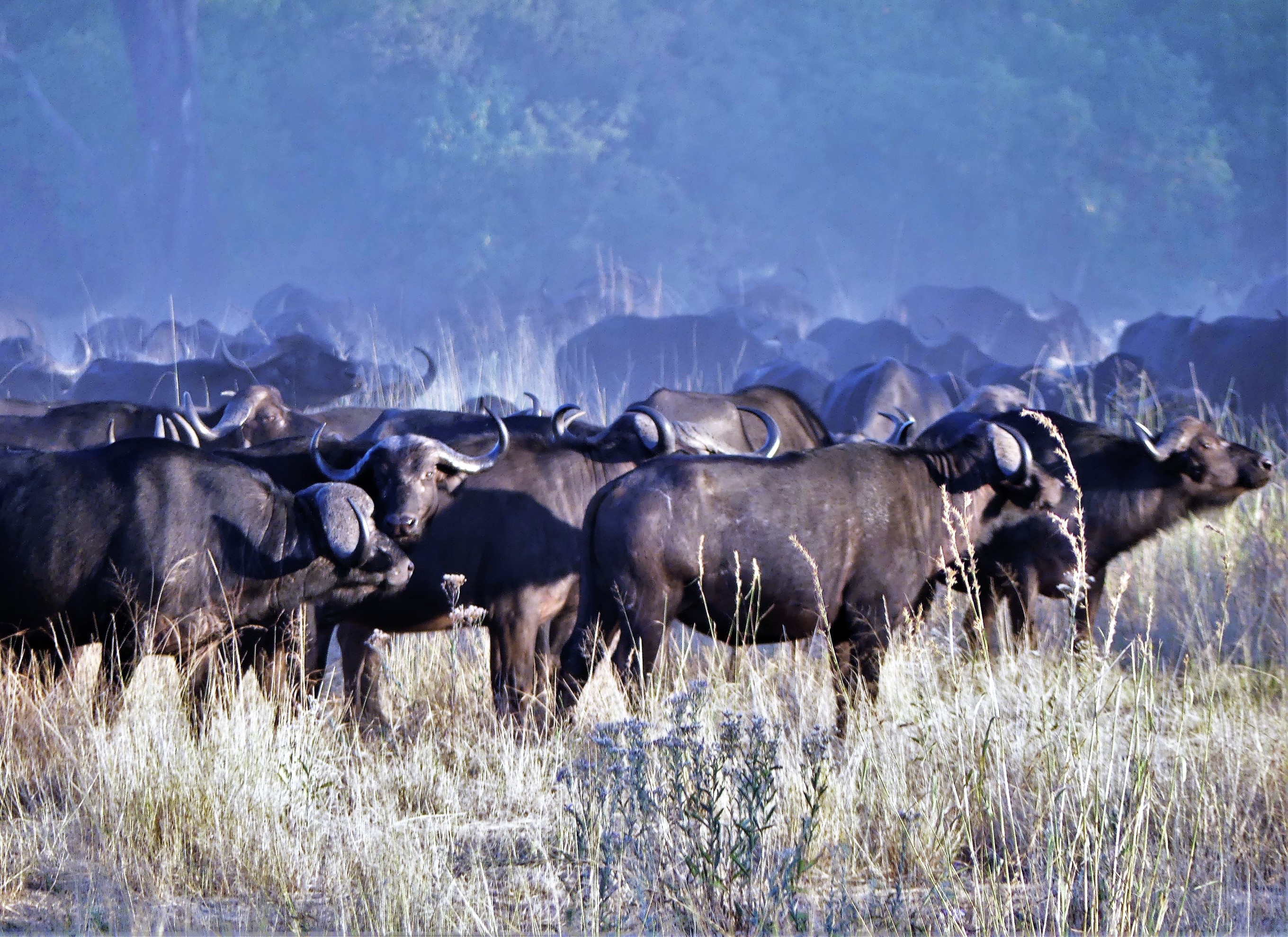 “I think something may happen here, so we should stay for a bit and see what develops.”

KT repositioned the Toyota in the shade of a large ebony tree, and we patiently watched  the herd from a distance, scanning the perimeter for predators in the hopes of encoutering a potential kill.

A young male had emerged from the bush to the right of the herd, and just as quickly disappeared into the thicket for a closer look at the buffalo and to assess the situation.

Wow! This was exactly what we came for, but it was a fleeting moment which left us somewhat deflated.

Undeterred, KT started up the Land Cruiser and cautiously followed the lion, who reemerged on the other side, and relocated on a shady slope upwind of the herd.

“This is where it will happen,” asserted KT, as he drove even closer to the resting young male.

No doubt, the lion was fully aware of us, as it turned in our direction. 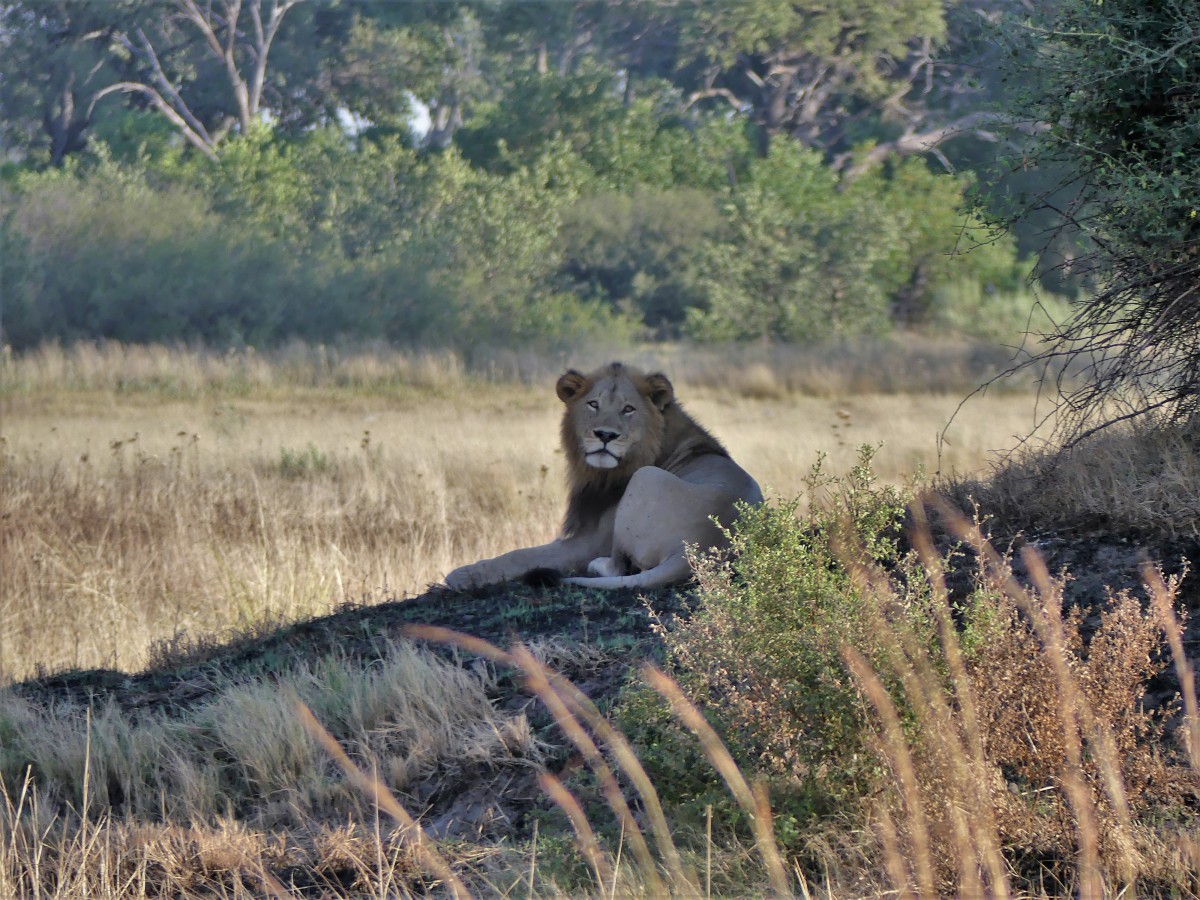 “He knows we are here. Aren’t we intruding by being this close?” I asked KT.

“The lions really don’t see us; they only see this truck–not the people inside,” he replied. “They don’t sense the truck as threatening, and it doesn’t smell like food. From the time they were cubs they have grown up knowing this vehicle, and they have become desensitized to its presence in the savanna. So as long as we respect them and do not interfere in their business, we can get very close to them. However, you must always remain seated, and for obvious reasons keep your arms and legs inside the vehicle at all times.”

“The moment you stand, you change the dynamics and the lion no longer sees the truck as a familiar object, which may make him uncomfortable and put you at risk,” explained KT.

And then another lion materialized from the brush.

“Ahh…this makes complete sense to me now,” KT surmised. “They may be brothers, and they are working together to isolate one buffalo from the herd before the herd disappears into the brush.”

KT restarted the Toyota and pulled closer yet, thinking the timing was right and the attack was imminent. We pulled within a few feet of the new male, who made himself very comfortable beside us…

while the first lion remained vigilant on the mound. 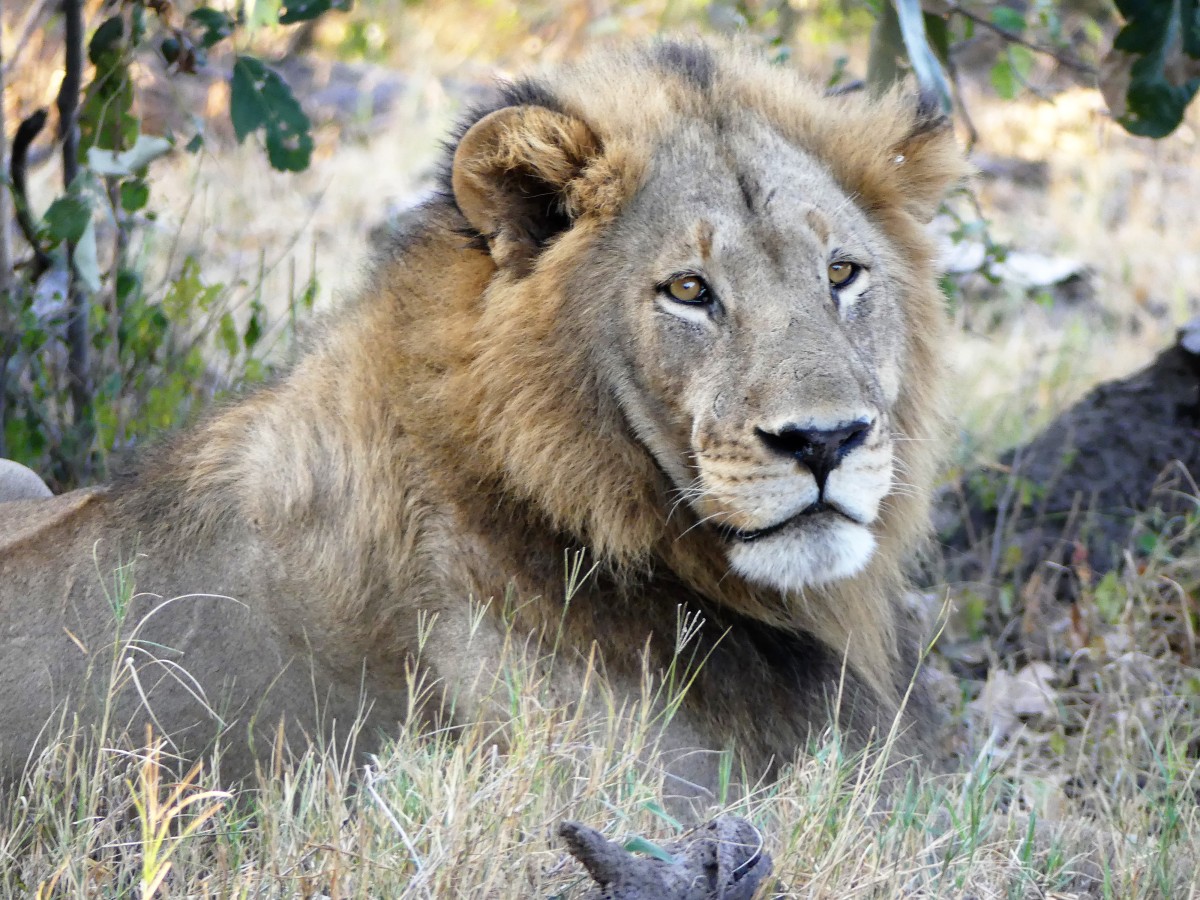 By this time, the herd had keenly sensed the pair of lions around them, and moved into the protective thicket nearby, preempting the attack.

Realizing the chase was over, one beckoned the other…

to a family reunion.

OMG!!! We held our breath, wondering what was next for the brothers. It had been an exhausting morning of hunting without a victory.

Hence, it was time for a nap!

Just then, KT answered a dispatched call on the radio alerting him that a colleague had spotted fresh leopard tracks a few klicks away, so off we went in search of another adventure.