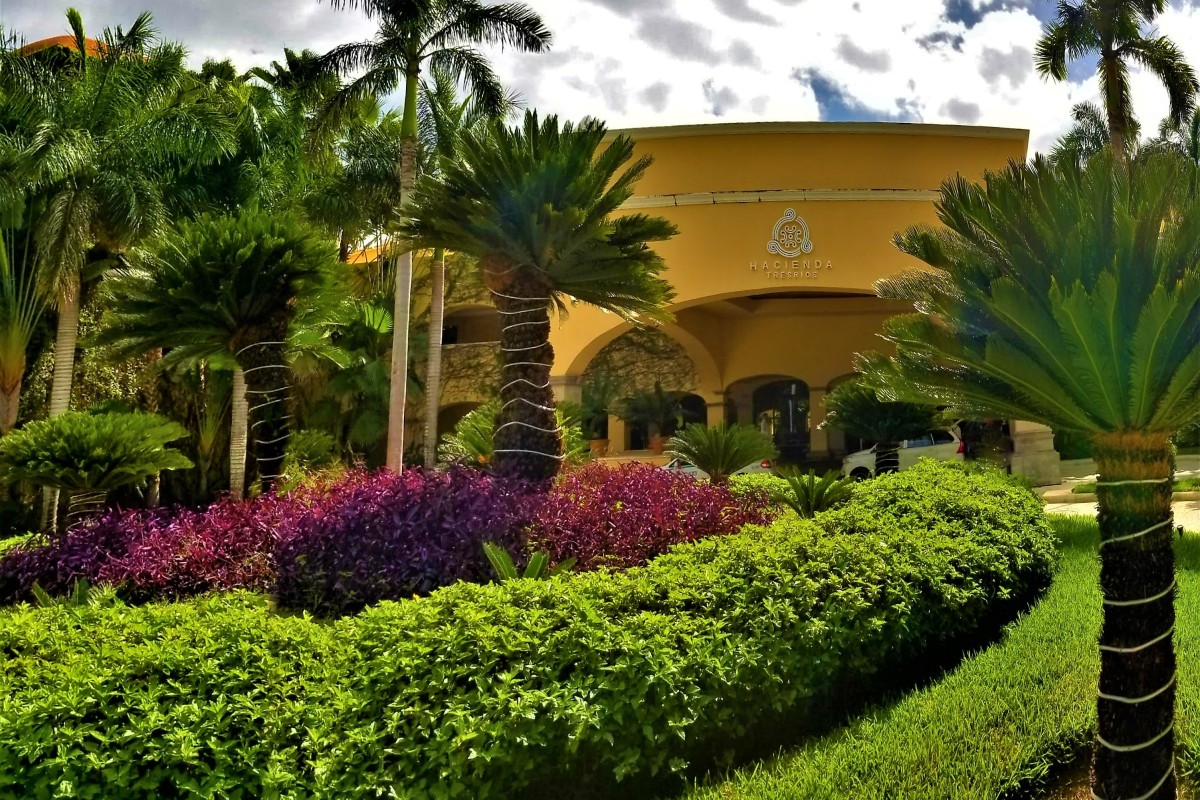 Leah and I sat in beautifully hand-carved, yet wildly uncomfortable rattan chairs over a Mexican buffet breakfast that could best be described as Meh-ican. Sitting across the table from us was Ricardo, a familiar host and representative of the developer, who was writing upside down with his Mont Blanc pen, while presenting all kinds of facts and figures about the local hospitality game.

Ricardo was finding his groove. He was flashing pages of a promotional real estate magazine and rattling off stat after stat as he actively drew a map of the Quintana Roo coastline on the backside of a resort brochure. For every detail added, Ricardo would reinforce his point by circling the Riviera Maya caption at the top of his masterpiece, until it resembled a paddleboard floating on a cartoon sea. With bold retraces and multiple underscores from his pen, he emphasized the unprecedented low, low prices that wouldn’t last unless we acted today!

Ricardo’s presentation was polished and professional, needing only one new breath of air every five minutes or so to sing the virtues of founding membership privileges, and the accorded rights and benefits granted to ground-floor go-getters who were willing to take advantage of a great deal when they saw one.

Ricardo has been honing his razor-sharp delivery skills for the past 25 years, having moved from Jalisco in search of an opportunity, and finding sponsorship with the Sunset Group, a controversial band of land speculators and developers from Mexico, who have since built four resorts from Cancun to Playa by selling timeshares to curious vacationers who couldn’t resist the notion that a Mexican vacation would fulfill their sun-starved lives.

Hacienda Tres Rios has become their biggest venture to date. Once an active Nature Park, the preserve fell on hard times after the devastation of Hurricane Wilma in 2005, and ultimately closed. In exchange for the right to convert the dormant property into a resort, the Secretariat of the Interior secured a commitment from Sunset Group to  restore the mangrove habitat and preserve the original eco-park concept.

Ten cenotes (some fresh water, and some brackish) are scattered throughout the property, with miles of bicycle paths carved into the jungle, providing access to swimming and snorkeling, while a short hike to Cenote Aguila offers a chance to kayak or snorkel down Rio Selva to the sea. 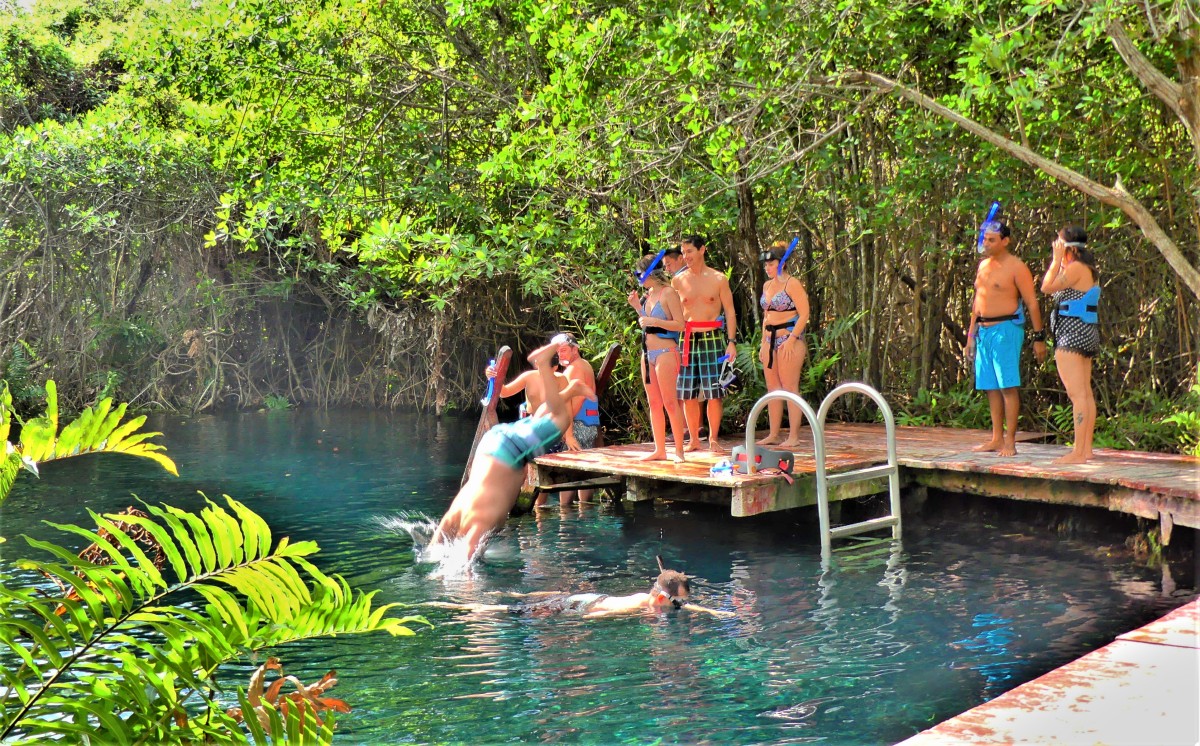 Subsequently, steps have been taken towards self-sufficiency: with completion of a mangrove and orchid nursery, a water desalination plant and inverse osmosis system, solar panel installations for sustainable energy production, and a local farm-to-table concept that cultivates flowers, fruits and vegetables for all resort restaurants. Sunset World has transformed Tres Rios into Mexico’s first green resort years later, and is now the standard-bearer of all future hotel development in the vicinity. 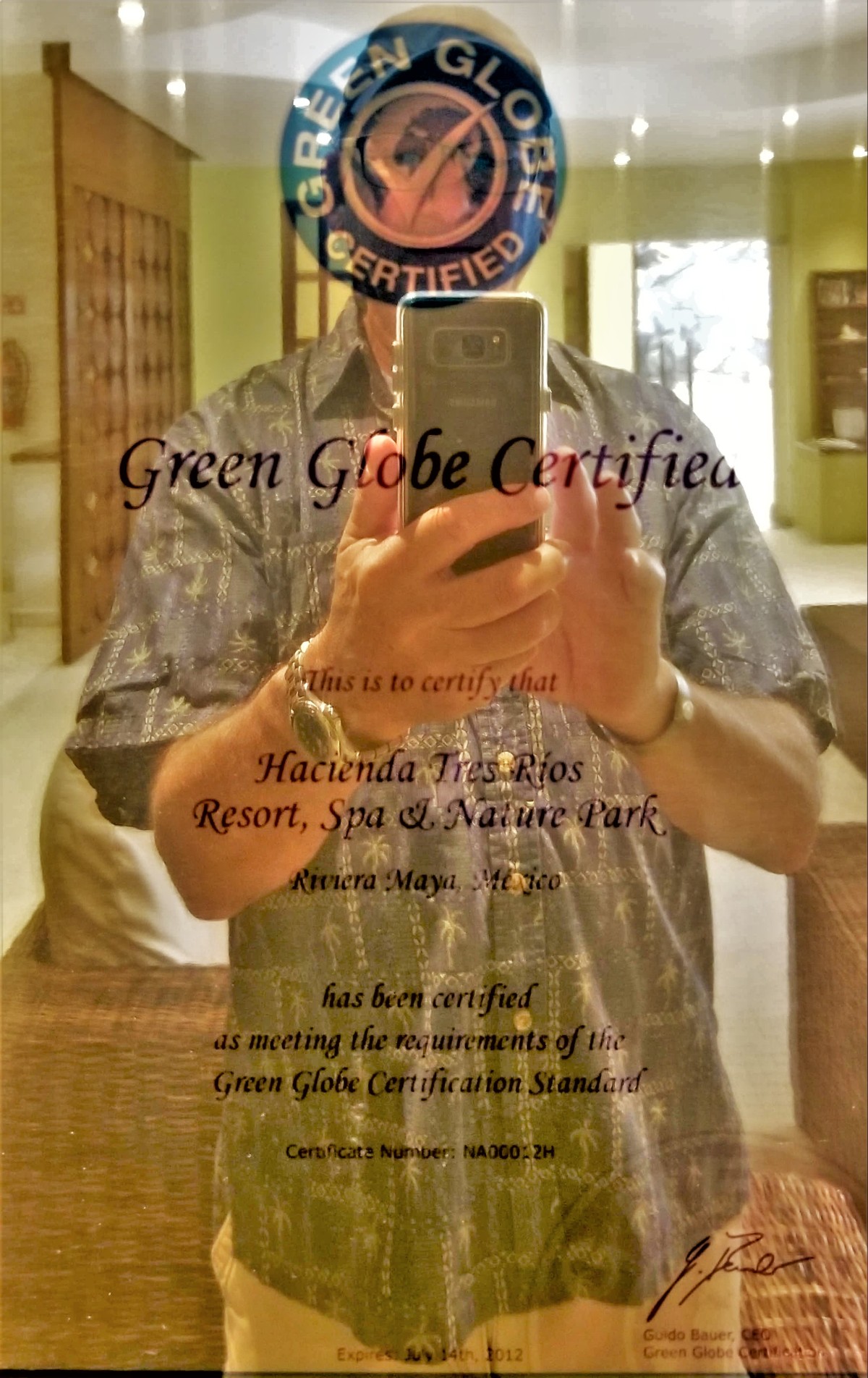 As members of a sister resort in Playa del Carmen, Leah and I were invited ten years ago to inspect the property at Tres Rios and sample the spa hospitality. We returned the same evening to enjoy a Mexican fiesta on the beach, but not before we were spritzed with organic mosquito repellant, which really seemed to keep the bloodsuckers away. It was great fun at the time, and seemed like an experience worthy of repeating.

Subsequently, Ricardo and I negotiated on a one-bedroom suite for a one-week share that for many different reasons has been visited only four times in the past ten years.

Today, the Sunset organization prepares to finance Phase Two at Tres Rios, promoting luxury interval ownership, and beyond (future development of single unit residencies, and a marina with ocean access), so Ricardo sits across from us, giving his all–dazzling us with his artful cartography and adroit calligraphy–with every intention of leveraging our single week of ownership into a one-month obligation, which will help to defray the cost of the elaborate June Quinceañera his daughter has been planning for nearly a year.

But Leah and I never had any intentions of upgrading. Never. We were there for the sole purpose of exchanging our two hours of attendance for an hour of spa treatments. While our massages are presented as a gift for our precious time, realistically, it’s little more than a simple lure that’s part of a much larger marketing strategy.

It was a monumental match of wills: Ricardo’s relentlessness versus our resilience. After an obligatory walk-thru of the newly appointed model apartment (which was roomy, luxurious, and fashionable) we moved through a display and awards room to reach an open conference room populated with small tables surrounded by high-back leather chairs. This was to be the setting for Round 3. While the chairs were more comfortable, the air temperature inside was rather chilly, prompting a request from Leah for a blanket before she bolted.

When Ricardo sensed that things weren’t going his way, he called for an assist from Patrick, his manager, who from gracious introductions revealed himself to be a 40-year old Irishman with a Mexican accent. The sales pitch devolved even farther after he further explained his unusual heritage: his Irish father met his Mexican mother while vacationing. They subsequently married; lived in Dublin until Patrick turned four; and under duress from his mother, his father returned to Mexico, where Patrick was schooled and his parents eventually divorced, although on good terms.

His father currently lives in Ireland, where he crafts granite fountains with Mexican stylings, and has sold one of his designs to Bono for his home on Killiney Hill. The conversation turned to our love of U2’s music, our mutual excitement of seeing them entertain live on stage, and Patrick’s fascination with my look-alike appearance to Bono.

Out of the corner of my eye, I knew that Ricardo was defeated. Unable to participate in our repartee, he sat silently and sulked, perhaps wondering if he could ever recover. I signaled to Patrick that we were passing on the offer, and just like that, the transaction was finished and so was Ricardo’s energy.

In a last ditch attempt to win the sale, he severely undercut his original bid. And like a Hail, Mary pass floating into the endzone, he threw in all kinds of extras with no charge to us, but we stood strong; we would not be swayed.

In the end, we shook hands as friends–Ricardo, the fallen gladiator, vanquished in the sales arena, and me, the victor with my wallet still intact.

2 thoughts on “At Your Service, Too”