High on a bluff, overlooking the Wilmington River, sits Bonaventure Cemetery, 160 acres of inspired Southern Gothic funerary art and monuments worthy of any fabled ghost story setting, and one of the most hauntingly beautiful resting places found in America.

Named Bonadventure–good fortune in Italian–and conceived as a 9,920-acre plantation stretching from Ebenezer to Sunbury, Georgia, the land owners, Tattnall Sr. and Mullryne (son and father-in-law) mistakenly sided with King George III during the Revolutionary War, and were immediately denounced as traitors and stripped of their holdings by a Georgia council.

Tattnall Jr. returned from England soon after the war and reacquired a 750-acre tract of the property, where he settled with his Savannah-bred wife and family, before selling to Peter Wiltberger in 1846, who converted the land to a cemetery.

The day of our visit was dreary and wet, and it seemed fitting that the Spanish moss draped over 300 year-old oak trees would be weeping from the occasional drizzle. 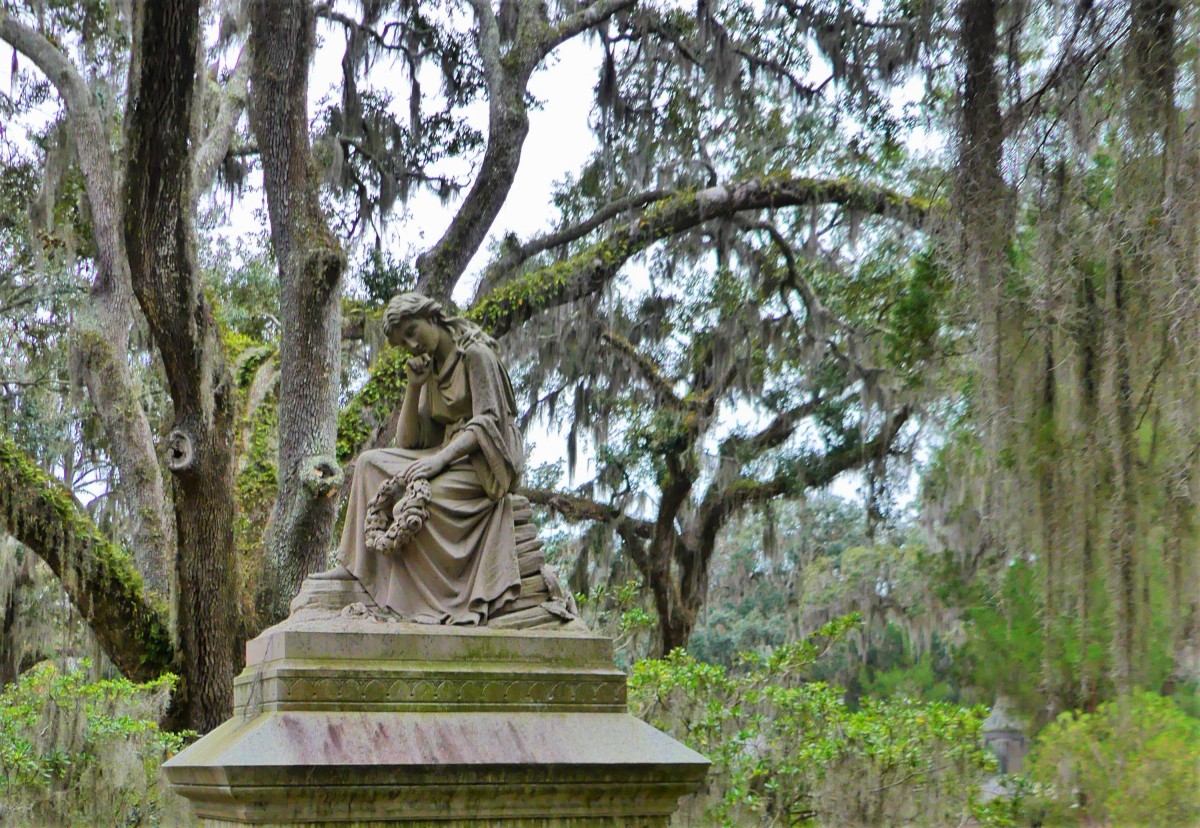 Oddly, two sets of gates provide access to the graveyard: a Christian wing to left… 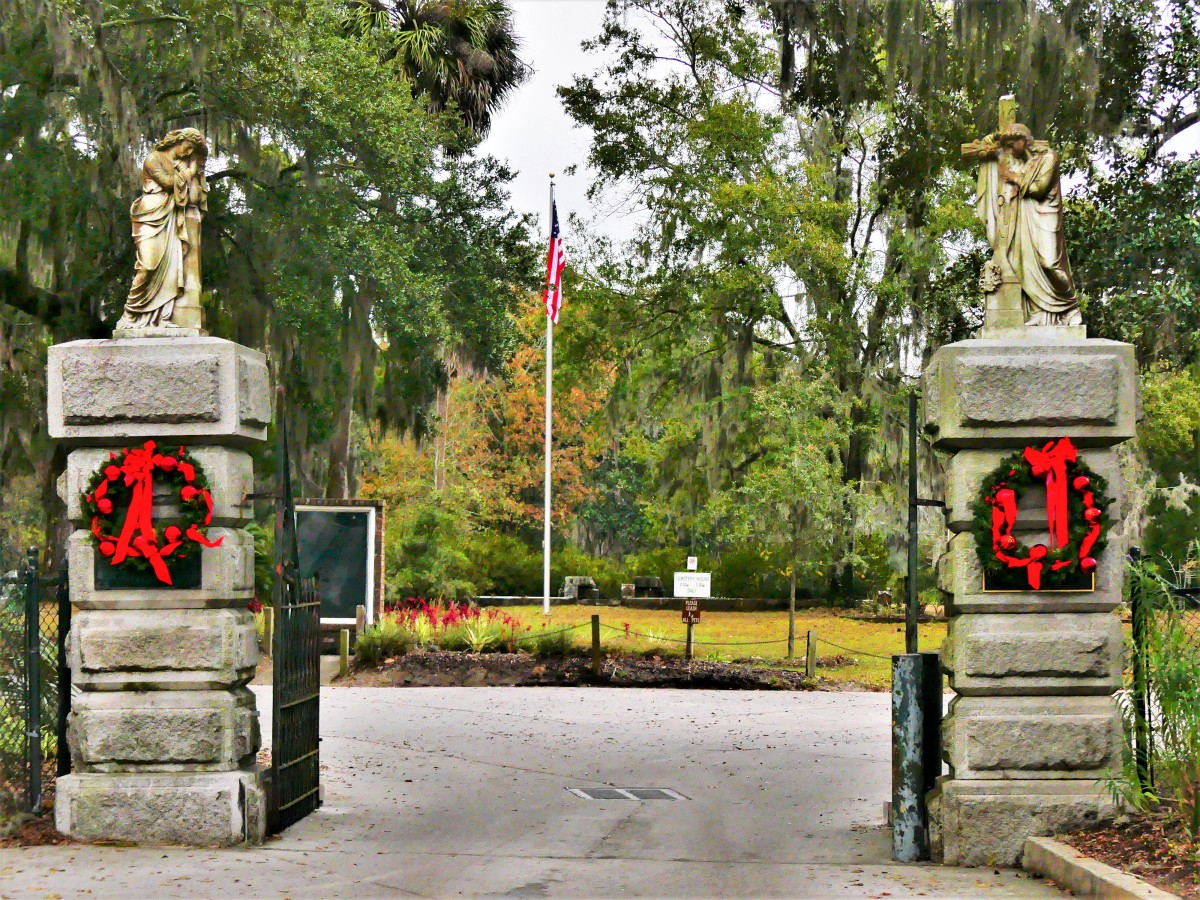 and a Jewish gate to the right.

We approached a gravedigger who was stepping out of his pick-up.

“I couldn’t help but notice the Jewish stars on top of the gate posts,” observed Leah.

So Christians and Jews are buried together?” I questioned.

“Yes, sir,” agreed Doug. “Each religion’s got their own separate sections, and…”

“Yes, ma’am. I dug two fresh graves today. But you can’t buy your way in anymore, cuz everything’s all sold out long ago. But people keep askin’. I guess they’s dyin’ to get in,” joked Doug.

We set off to explore. The cemetery was unexpectedly quiet for being a top attraction for curiosity seekers, and the bereaved. 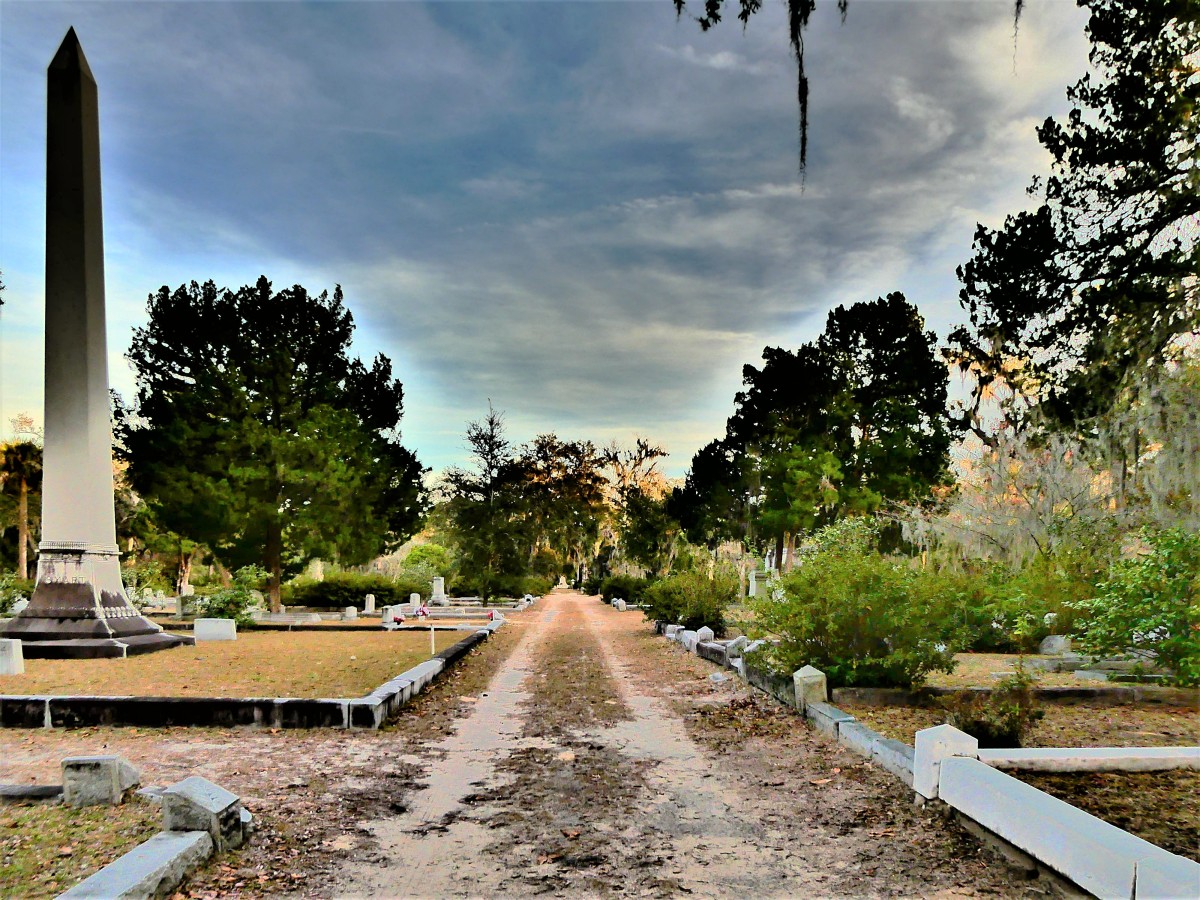 We were on separate missions. Leah went in search of her namesake, and found her in a short matter of time.

Whereas, I was in search of Johnny Mercer’s memorial–the legendary lyricist who penned over 1500 songs, was nominated for 14 Academy Award nominations, won Oscars for The Days of Wine and Roses, Moon River, In the Cool, Cool, Cool, of the Evening, and On the Atchison, Topeka and Santa Fe, and co-founded Capitol records–which turned into more of a scavenger hunt.

Resorting to the internet, I discovered the section and plot (H-48), but finding it was another matter, since the layout is unlike any grid, with over 31,000 burial records to date.

Leah went one way, and I went another. We wandered aimlessly through rows and rows of plots till we plotzed. I quickly understood why guided tours through Bonadventure Cemetery are so popular.

Eventually, I got some help from a pair of caretakers who were blowing damp leaves across the dirt and gravel roads. They were eager to help, but my inability to translate Malaysian, turned my request into a game of Charades.

Using broken English and hand gestures, they redirected us to the general vicinity, where we crossed paths… 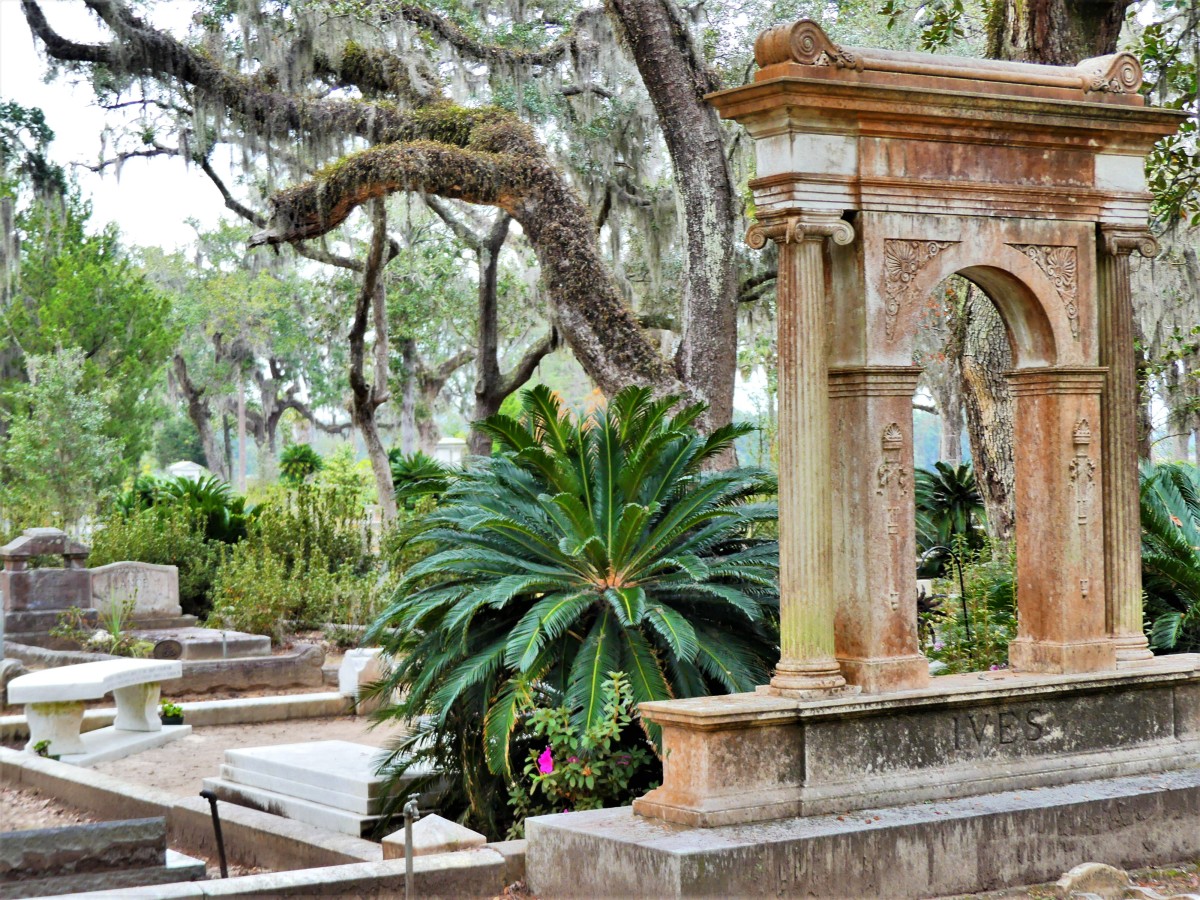 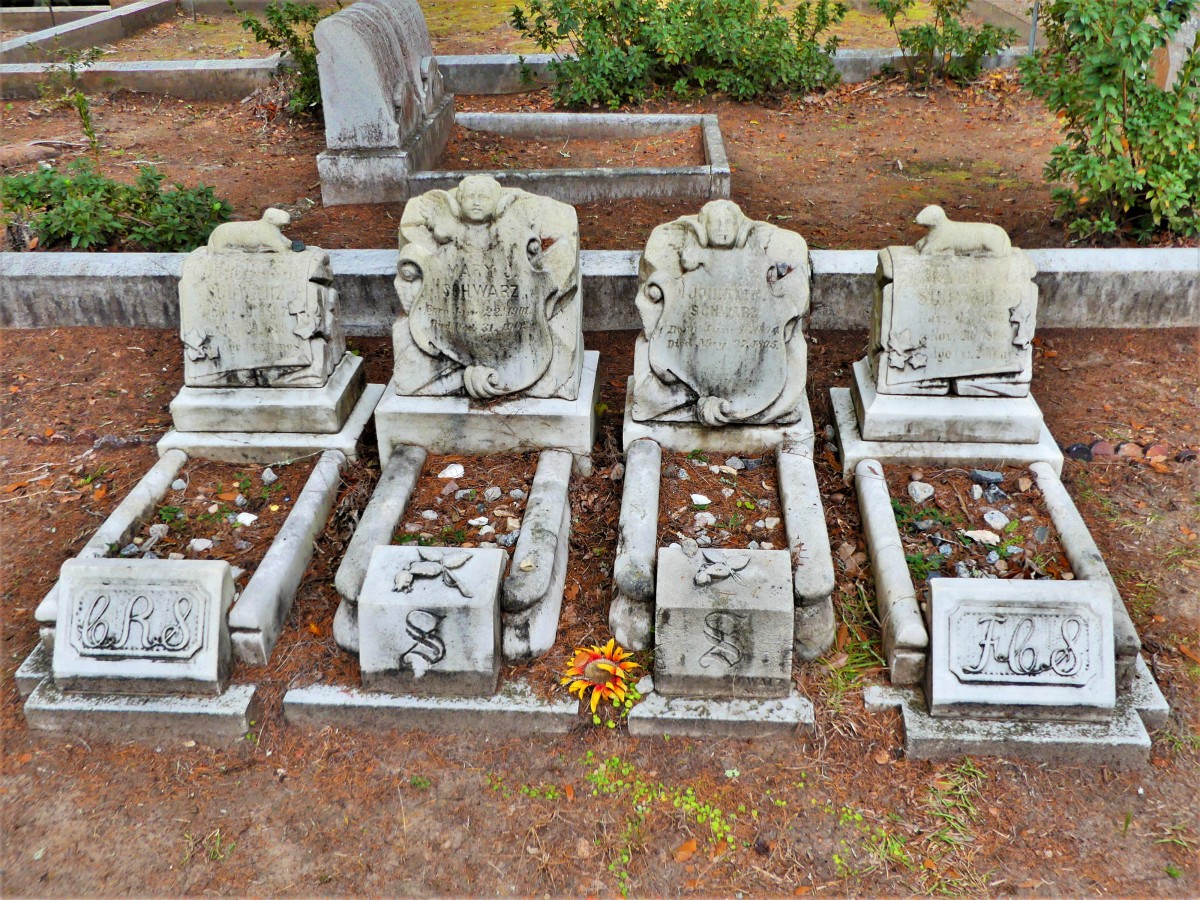 We wound our way through Section H until signs pointed to Johnny Mercer’s shrine of hits.

who is buried beside his father who murdered his mother, before turning the gun on himself when Conrad was 11-years old. Conrad went on to study at Harvard, where he was mentored by T.S. Eliot, and won the Pulitzer Prize for Selected Poems in 1930.

Another literary thread woven through the Bonaventure fabric includes New York Time’s longest-standing (216 weeks) bestseller, Midnight in the Garden of Good and Evil, a true tale written by John Berendt.

The book cover featured Sylvia Shaw Judson’s Bird Girl, who graced the graveyard in relative obscurity for decades, until fans of the book sought out the statue’s location at Bonaventure, and began chipping away at its base for souvenirs. Eventually, Bird Girl was rescued and resettled in Savannah’s Telfair Museum of Art, where she can rest in one piece.

Bonaventure Cemetery under overcast skies during late autumn appears mostly monochromatic and presents a solemn and sombre mood. There are occasional pops of color from late blooms, to liven up a lifeless location,

but I was unprepared for the cheeky display I discovered on my way out.

For me, this represents a bonafide celebration of a life once lived, versus a death soon forgotten.