The ride to Closed Canyon Trail, the only slot canyon in Big Bend Ranch State Park, took us past the park picnic area, revered for its iconic teepee overhangs.

The road continued another 7.5 miles up and down multiple grade changes, curling in and around exposed mountain walls, and mimicking the serpentine lines of the Rio Grande, making it a driver’s delight and a passenger’s revelation. It’s little wonder that El Camino del Rio has consistently ranked as a “ten-best” scenic drive in America. 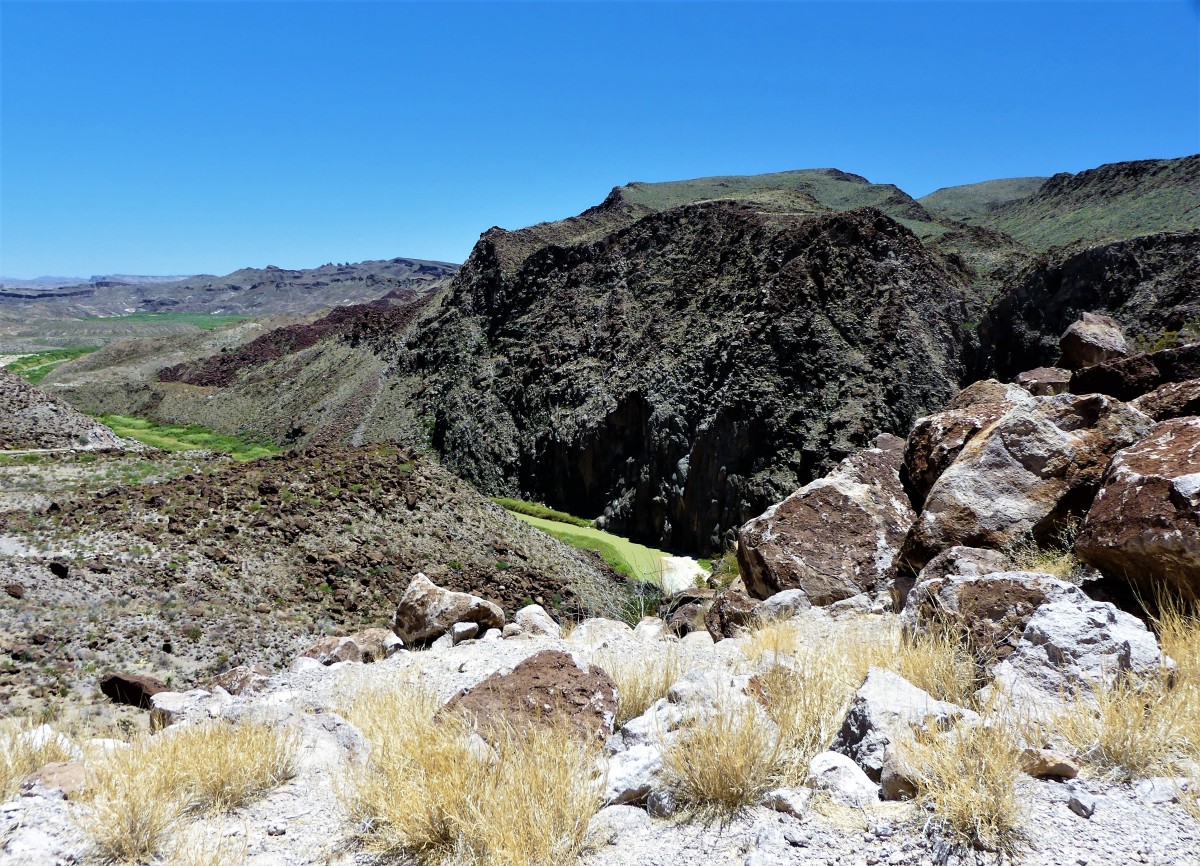 The signage throughout the State Park suffers because of its immensity (300,000 acres) and limited resources, so having Mike as lead proved advantageous, since it would have been so easy to overshoot the trail head in favor of the surrounding vistas and roadside scenery.

The approximate geologic age of the calderas (a collapsed volcano) which formed the Colorado Mesa is 28 million years. The slot canyon evolved from millions of years of water erosion, steadily carving into the Colorado Mesa until it split in half, resulting in a canyon trail that runs 1.5 miles until it drops into the Rio Grande.

“Be careful where you walk,” advised Mike.

High cane grass lined the approach to the trail making us wary of Western diamondback rattlesnakes. We mindfully walked a short distance down a small hill into an arroyo to access the mouth of the canyon. The sandy floor was littered with boulders.

“Anything we should watch for?” I asked.

Mike thought a minute before responding, “It’s doubtful we’ll see a mountain lion, although they hang out in this area, but maybe we’ll get to see some javelina.”

“I doubt we’ll see anything at all,” Leah sighed. “Animals, for some reason, seem to avoid us.”

Leah to Mike, “It’s an old joke.” (see Where Have all the Gators Gone? (Long Time Passing…)

But then—as if on cue—our conversation was no doubt overheard by a greater earless lizard, who darted across the canyon bottom and froze, waiting for its close-up. 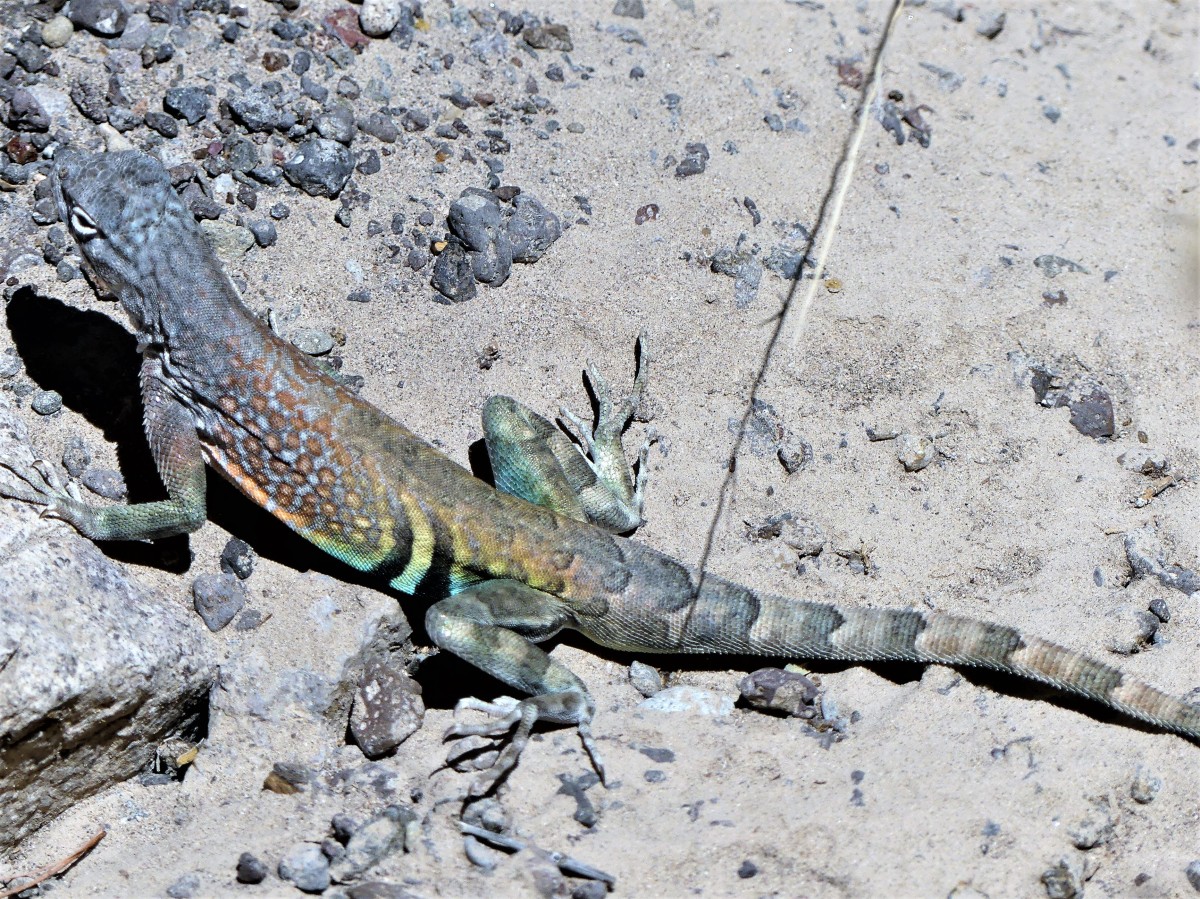 While the wildlife sighting reanimated us, Leah wasn’t sufficiently satisfied.

Thinking it was an omen, Leah roared, “Here, lion lion lion, here lion,” her voice echoing inside the chamber walls.

Uncertain of Mike’s politics, I lobbed him an ICE-breaker. “Any chance,” I subtly inquired, “we’ll have a Mexican sighting?”

“Unlikely,” he started out. “The canyon ends with a vertical drop to the river that requires climbing gear. But during monsoon season, this place flash floods, and all that water shoots out over that ledge into the river.”

“So technically, you could ride through here in a kayak?” I asked.

“It might be cool to do if you’re into danger,” he answered. “In fact, it would be tricky, but I would be into it!”

Mike was still avoiding the premise of my question, so this time I was more blunt. “But do you think building a wall out here would do any good?”

“Are you kidding?” Mike answered. “Obviously, they would have to build it on the Texas side, but that would keep everybody who comes here from enjoying the water. And besides, why would anyone want to spoil this amazing landscape?”

No argument from me. We worked our way further into the slot, scrambling over, around, and down water-polished rock, sometimes stopping to avoid the many tinajas–potholes of jaundiced water of undetermined depths scattered across the canyon bottom. 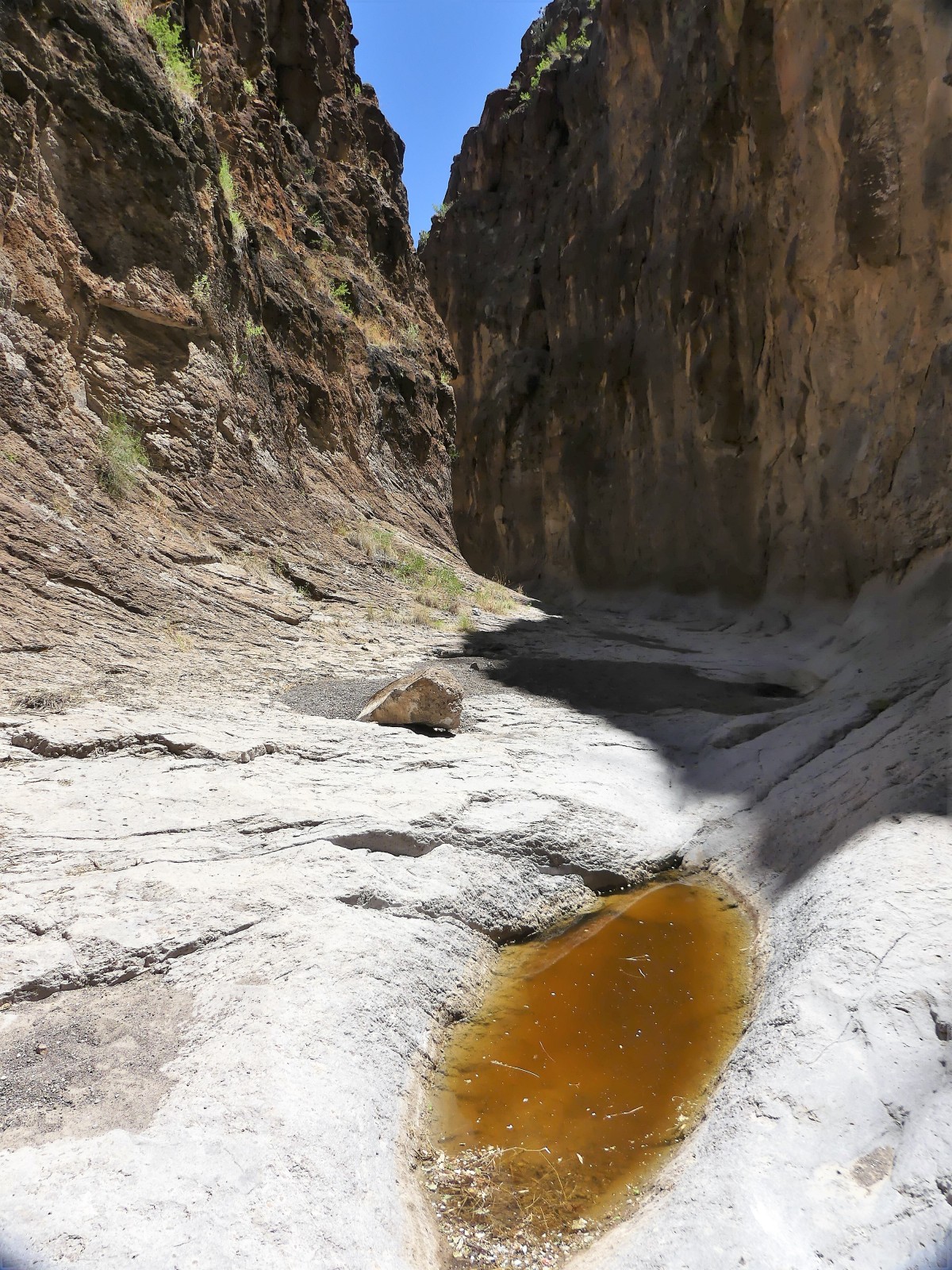 After an hour on the trail we reached an impasse. At this point, the canyon walls were narrow enough to touch with both arms extended, but the tinaja before us was too deep to ford, and too wide to bypass. All we could do was turnaround and hike out.

We savored the moment that brought us our second goal, and relished the notion that there was still more to see and do before the day was done.