The Vindanta vacation resort in Riviera Maya maintains a habitat for flamingos smack in the middle of their property, and neither Leah or I had any idea that it was even there, despite a sign posting by the iguana-laden boardwalk…

just outside our building.

We must have walked past the entrance to the preserve a dozen times or more, oblivious of the signage, probably thinking that Flamencos had more to do with a lounge or restaurant concept than the pink birds that occasionally keep company with gnomes and jockeys on people’s front lawns.

So imagine my surprise after learning of a conversation Leah overheard between two hotel guests who expressed such delight in watching these birds, that we had to see this unexpected treat for ourselves.

A short walk off the beaten path revealed a contained area at the toe of a foot-shaped lagoon,

where a “pat” of flamingos (maybe 20 or more) were cruising around a contoured wading pool surrounding a small island of palms and mangroves.

These quirky birds couldn’t stay still for a moment. They mostly followed the leader of the pack–a five foot specimen that often craned its long loopy neck… 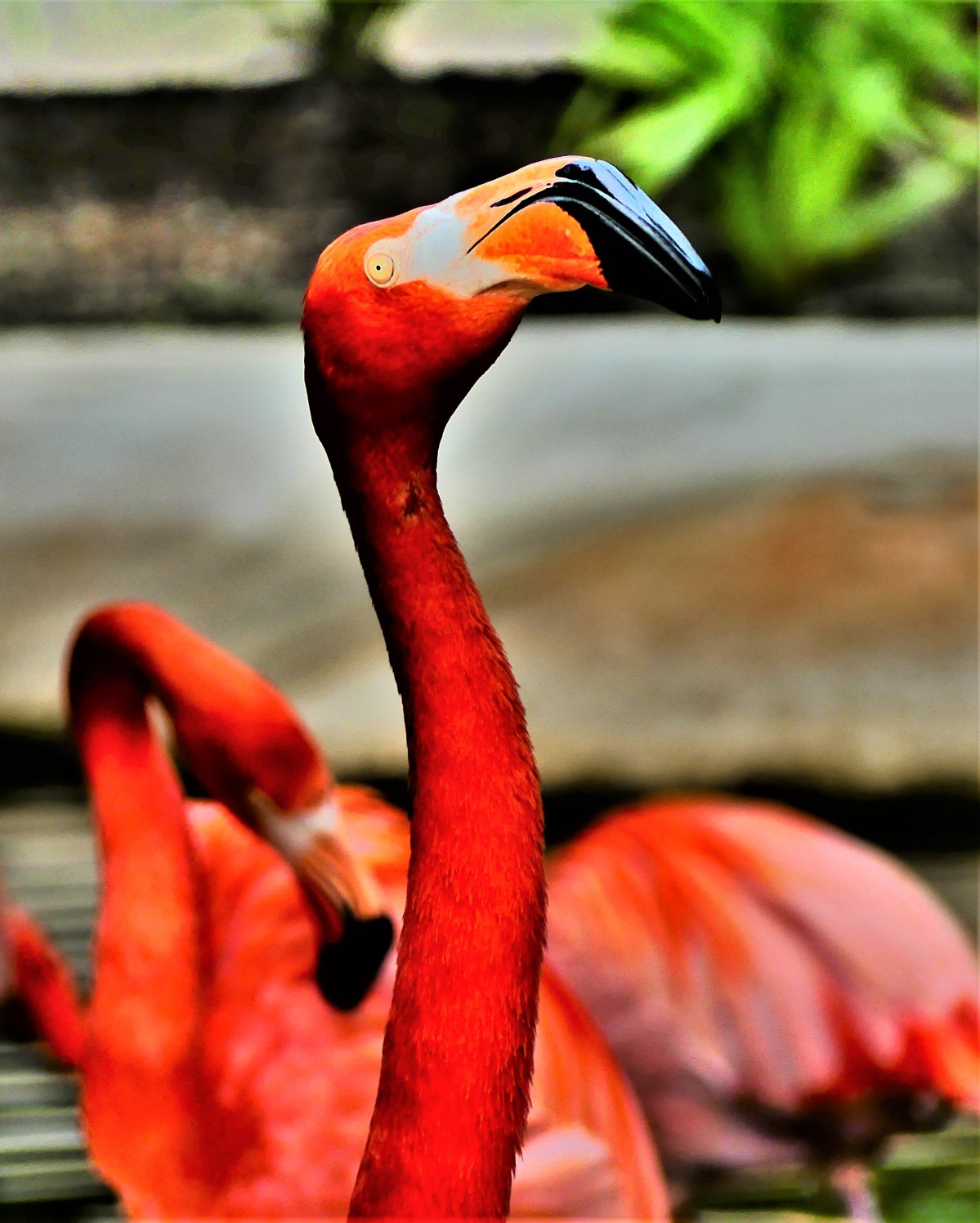 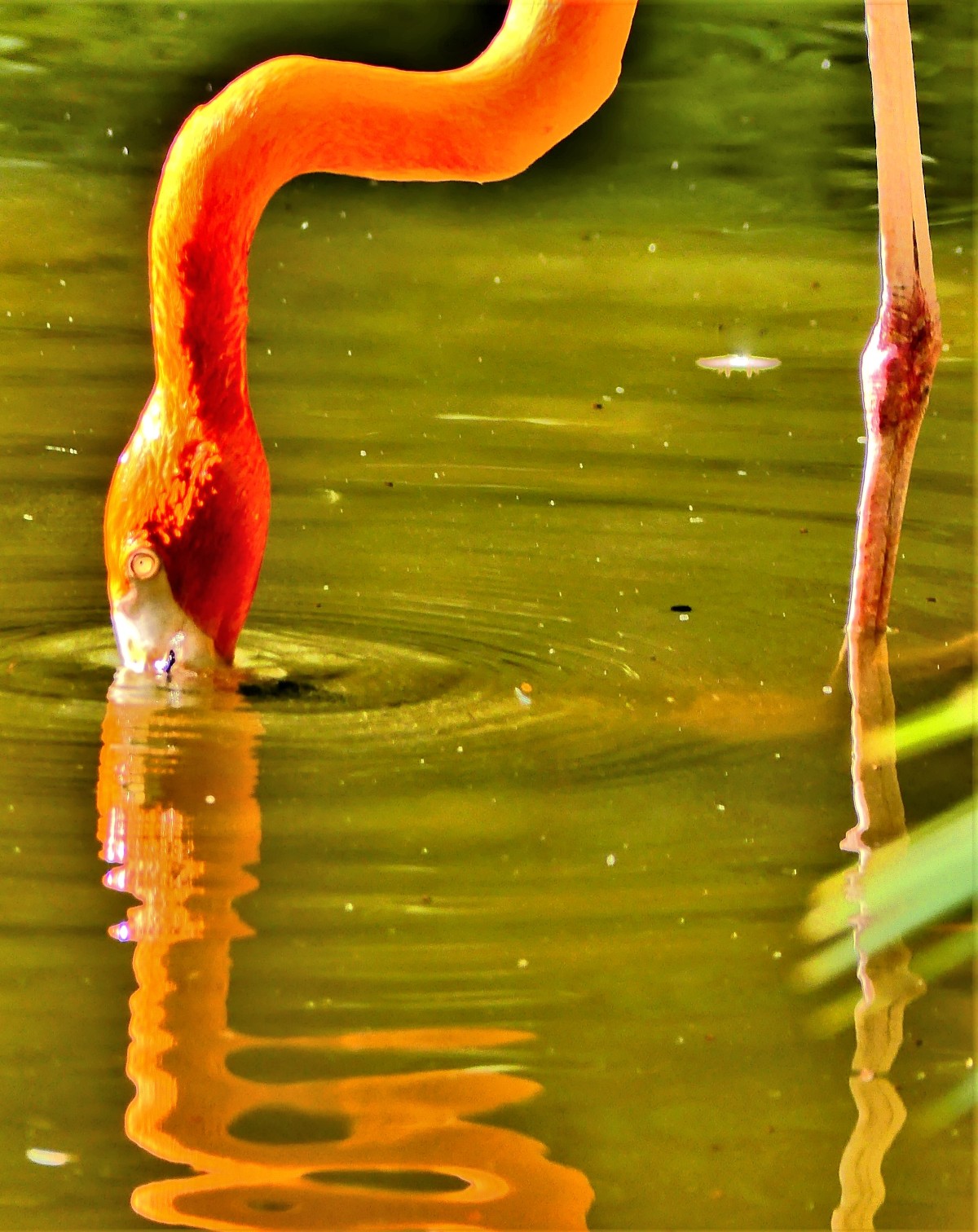 as his elongated legs wallowed through the rippled water… 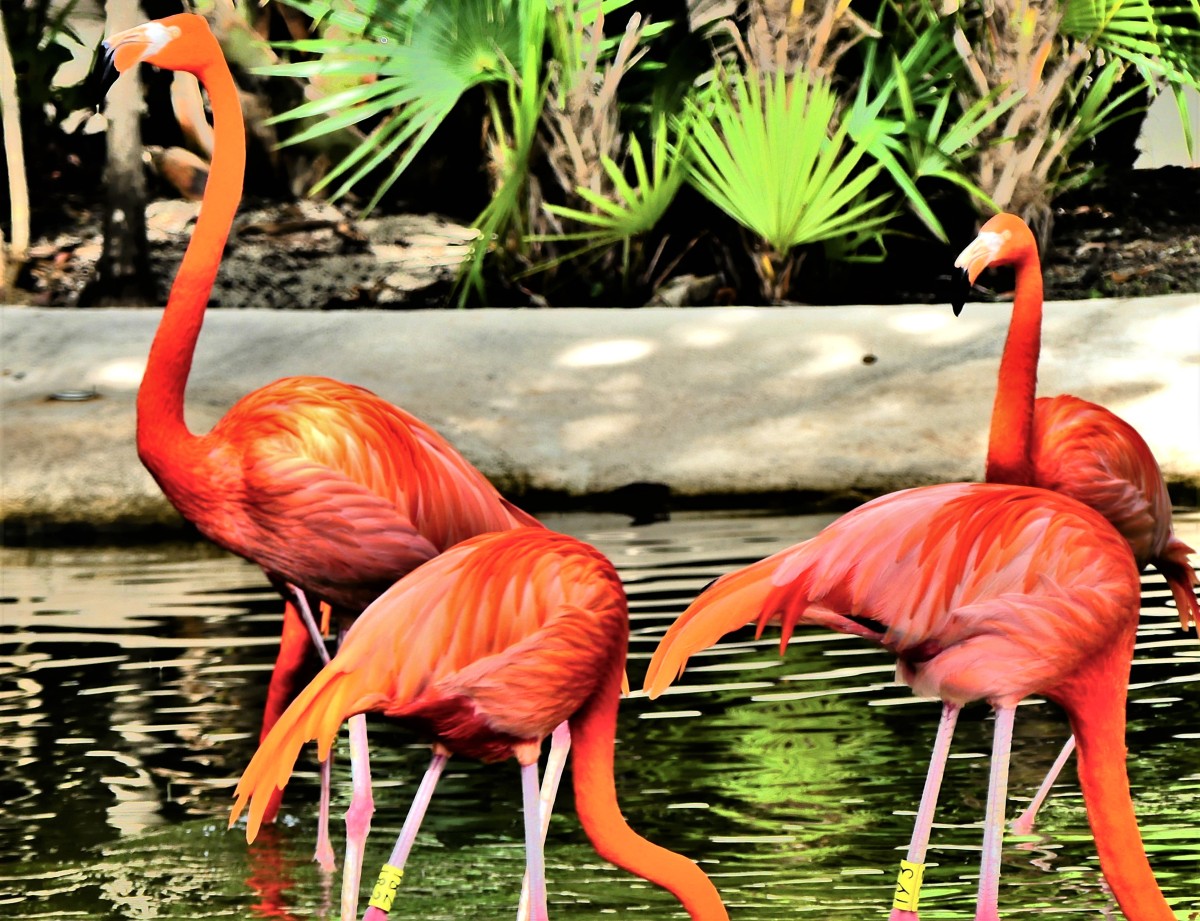 while keeping a watchful eye… 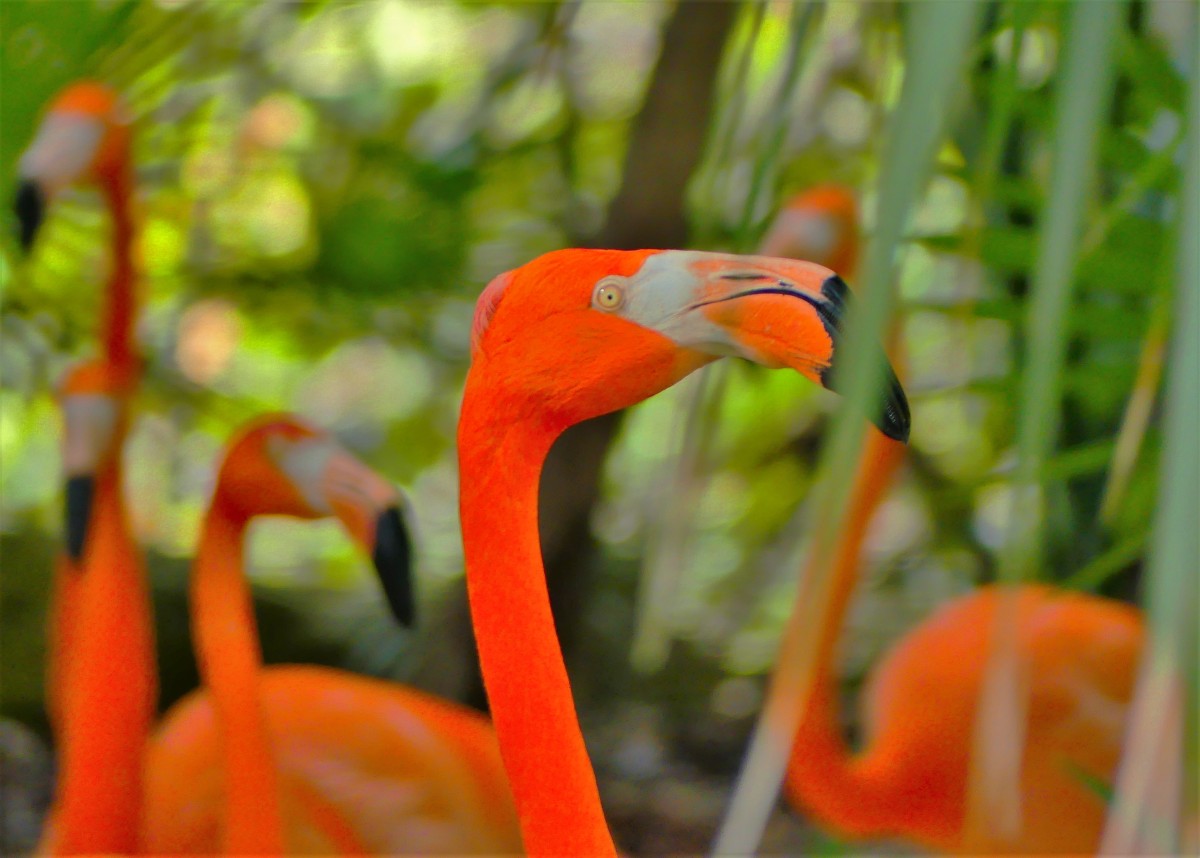 on the humans who regulary monitor and manage the water conditions.

Much of the pat’s time was spent trolling the curve of the pool with their immense beaks fully immersed in water, moving their heads backwards in an inverted position…

with their beak sharply angled downward from the middle–the narrow upper jaw fitting into the lower jaw–intended for separating mud and silt from the food that they eat.

The filtering is assisted by hairy structures called lamellae which line the mandible and a large rough-surfaced tongue, helping them extract the brine shrimp that constitutes their main source of food and the reason for the florescent color of their plumes.

Their fingers feature a webbing that prevents them from sinking in the mud they regularly wade through when feeding. 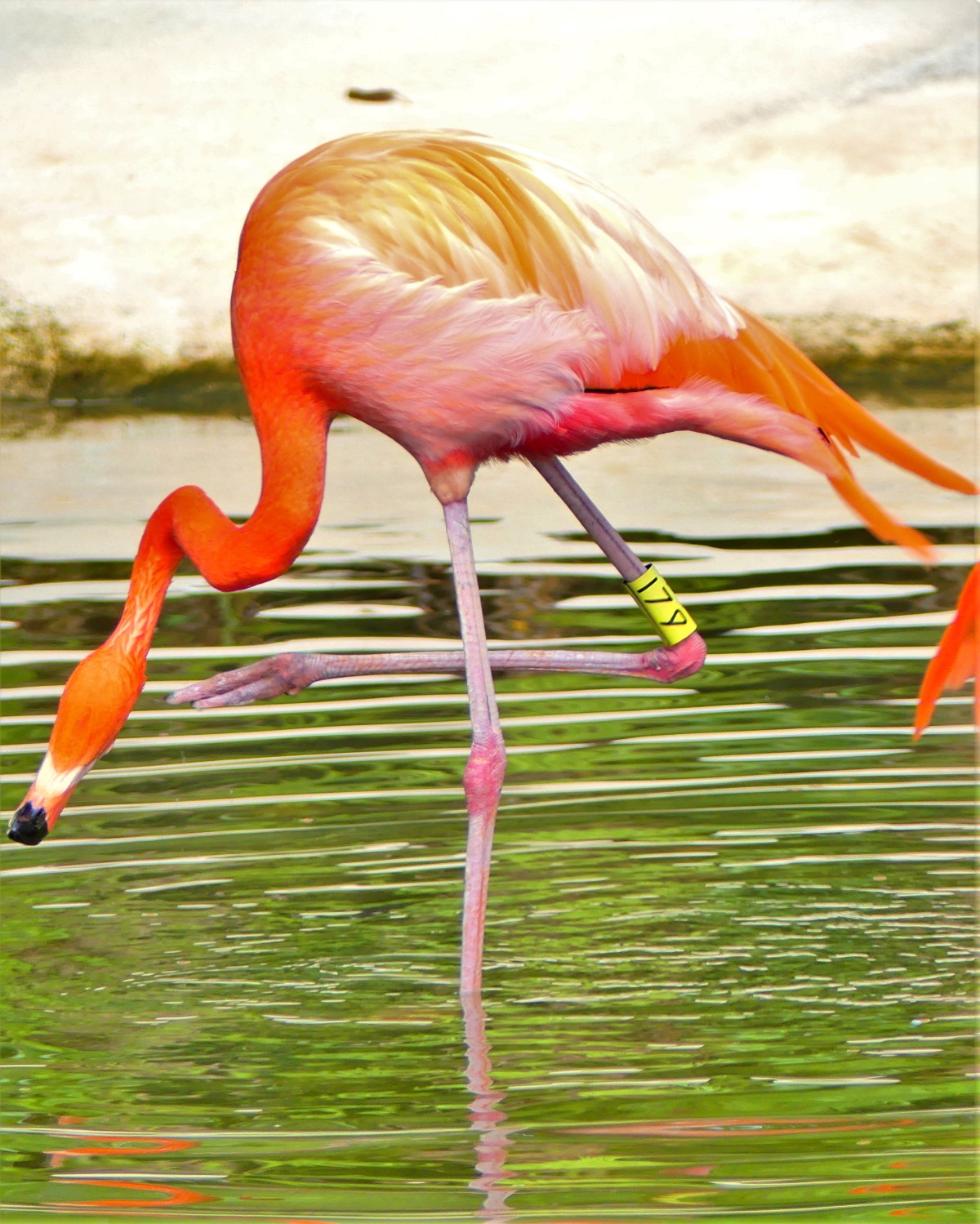 The Caribbean pink flamingo (American) reproduces on still waters, or on small islands within shallow salt water ponds and lagoons where it builds a mud mound with a small indentation for depositing its single egg (rarely two). The incubation period lasts from 28 to 32 days, and nesting is performed by both parents. Its offspring feed on regurgitated food for 75 days, although they can feed on their own after 30 days or so.

Flamingos reach maturity between two and three years of age, reaching recorded ages of 27 years in the wild and 50 years in captivity.

No doubt, these fascinating birds have it made in the shade.