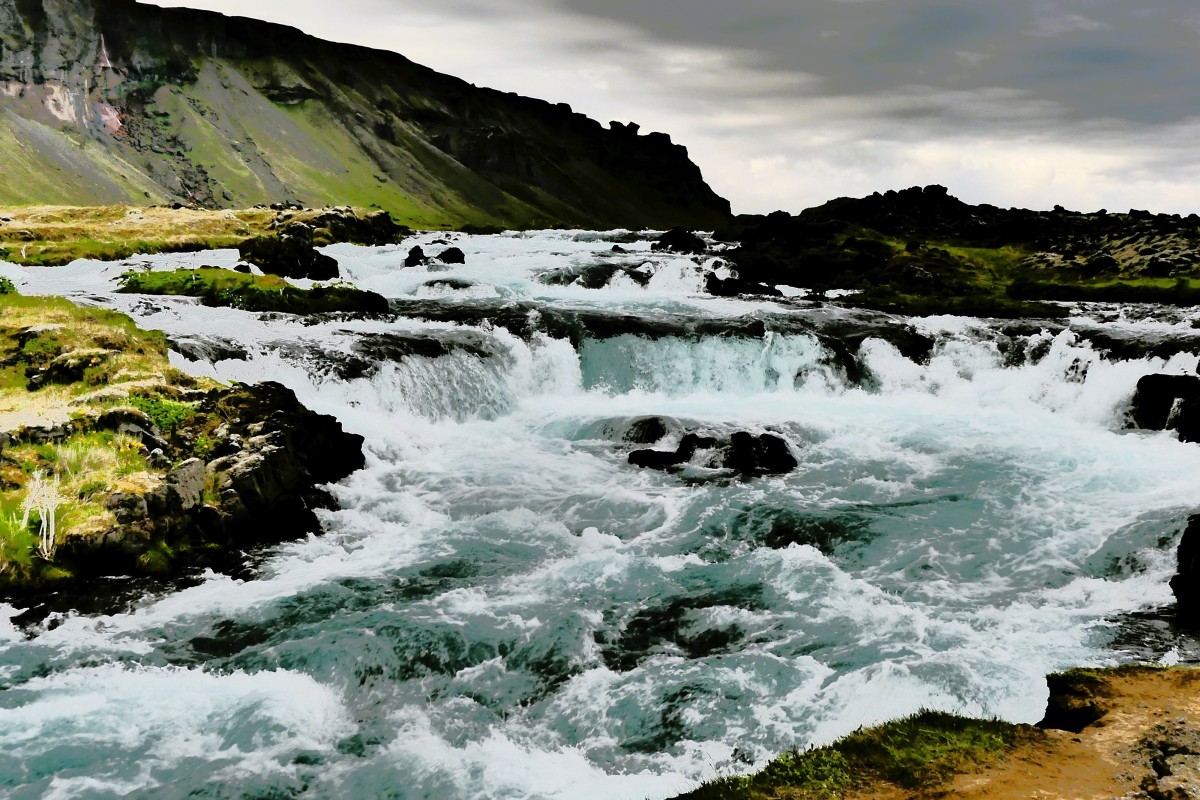 There is no shortage of waterfalls in Iceland, although some are more spectacular than others. Estimates of total waterfalls throughout range from 10,000 and up. But Icelanders have their favorites, and Seljalandfoss and Skógafoss are two of them. Located just off the Golden Circle and only 30K apart made it impossible to resist, so off we went, chasing waterfalls.

What makes Seljalandfoss special is its geological standing. It’s believed to be a part of Iceland’s receding coastline in Southern Iceland, where the Seljalandsá River once ran over the edge of a volcanic cliff and dropped into the Atlantic.

Seljalandsfoss’ glacial water originates from the Eyjafjallajökull glacier, a smallish ice cap atop Eyjafjallajökull volcano that last erupted spontaneously in 2010, belching so much ash high into the atmosphere that day turned into night and European air traffic was grounded for 5 days.

Eyjafjallajökull towers above the waterfall,

and the Eyjafjöll mountains feed meltwater to the river Seljalandsá, which runs down the slopes before dropping off the Seljalandsheiði heath in the form of Seljalandsfoss waterfall.

Repeated eruptions over millennia have extended the coastline by 12K, while erosion has hollowed out an extraordinary hiking trail that circles behind Seljalandfoss, which literally translates to “selling the land of waterfalls.”

Leah and I could immediately tell upon approach that this was a popular destination, which was soon confirmed by a full parking lot. There was a kiosk for paying the 800 ISK parking fee ($6), but I didn’t realize it until we were leaving. Oh well, I guess I was too focused on the shower I was about to take.

But Leah had different plans. “I’m not doing that,” she insisted. “I can’t find my rain pants anywhere and there’s no way I’m getting soaked. Besides, it’s probably slick from all the mud and water, and I don’t feel like breaking my neck on the third day of vacation. But you should go, and I’ll just look at the pictures later….Tell me about your insurance, again.”

“Shouldn’t we at least take a selfie like everyone around us?” I asked.

Leah had decided that Seljalandfoss’ 60 meter (200 feet) cascade was best appreciated from a distance,

while I was too anxious to capture Seljalandfoss from every angle.

True, the trail was muddy and slippery, but that was only a minor inconvenience.

The challenge came from dodging the unrelenting spray, as if it was weaponized by the wind.

I instantly missed Leah as my assistant. She would have made the perfect rain shield.

After coming around the back side of Seljalandross, I rejoined Leah on a path which led to a small waterfall known as Gljufrabui,

hidden within a slotted canyon.

We hiked back to the Land Cruiser and headed in the direction of Holt. I was casually driving, enjoying the scenery at 90 kph (60 mph), Iceland’s top speed limit, when I hit the brakes….after noticing Iceland’s perfect farm.

We made one additional stop along the way to Skogafoss, when I slowed to catch a glimpse of what appeared to be a Hobbit house built into the mountain.

However, on closer examination, it appeared to be a shelter for sheep and goats.

The approach to Skogafoss had several imposing mountains in the vicinity, also part of the former coastline.

Ironically, Skógafoss translates into Forest Falls, but there’s not a tree to be found in the area. It seems the Vikings had a penchant for chopping all of them down to create their settlement a thousand years ago.

Skógafoss is one of the biggest waterfalls in Iceland. Game of Thrones fans may recognize the falls as the aerial backdrop for a romantic encounter between Daenerys Targaryen and Jon Snow when flying with her dragons.

visitors can climb a rickety 430-step metal staircase anchored into the cliff, allowing visitors to reach the spillover and enjoy a view of the coastal lowlands while basking in the Highlands, or continue on a popular trail leading up to the pass between both glaciers.

Skógafoss is a place where magic happens…