I’ve been getting lots of political email lately. In large part, it’s been requests for donations coming from Trump’s 2020 Campaign for President, with rally words added to hype an emotional response, and misinformation intended to misguide the nation. It amuses me and terrorizes me at the same time.

It all started when my curiosity compelled me to participate in a Republican National Committee (RNC) survey at Donald Trump’s email behest:

I was game. I swallowed the bait and jumped down the RNC rabbit hole for a deeper look at the Mad Hatter’s tactics. Confronted by leading questions, I answered in a way that left no doubt about my disapproval of Trump’s policies, his absence of ethics, and his lack of leadership.
For instance, when asked at the end of the survey, “What else do you think the President needs to know about the real America? We’re listening.” I responded in chapter and verse about his controversial WALL:

Humpty Trumpty wanted a wall
And Mexican pesos to pay for it all
But all the Trump bankers
And all the deplorables
Couldn’t find ways to make it affordable.

I presumed that my straightforward responses would immediately disqualify me from any future Trumpian communication, but I was wrong. I received an immediate response:
Wow! I couldn’t believe I had just earned the right to take $6 off the purchase price of a MAGA cap as a reward for my participation and apparent support! Is this a great country, or what?
However, controversy continues to surround the manufacturer’s claim that the president’s swag is 100% proudly made in America. According to factory employees (who stitch the hat in Los Angeles) and an independent laboratory conducting microscopic fabric analysis, the hat components have been sourced and imported from overseas.
I decided to pass on the hat for two reasons: First of all, I disapprove of the messaging, feeling that America, despite its flaws, has always been great, and doesn’t need to be reinvented by a game show host who panders to white supremacists; and secondly, the hat doesn’t come in blue–only hot pink, yellow, camouflage, and red.
Again, I thought this was the end of things, until I received another blast from Donald J. Trump, forewarning me about my negligent membership status:

Imagine! The President of the United States, a self-professed billionaire–whose estimated wealth is dubious because of withheld tax returns–now counting on me…for a single dollar contribution to his campaign, and pressing me with a renewal deadline!

What a dilemma! Of course, I still wanted to track the Trump Big Top. But what if I didn’t come up with the money in time? Would I no longer be welcome inside the circus tent? I decided to wait.

The next day Eric came calling under the guise of FAKE NEWS:

Eric makes quite an argument for my dollar–defending Daddy from a CRUSH of criticism, and a chance to be on the right side of America. This was good stuff.

And then this arrived the day before the FEC deadline:

…with another declaration of war against the media.

No doubt, being President of the United States is a demanding job that requires intense concentration and extensive hours studying the problems of the country and the world, followed by intense debate and policy development to secure America’s safety and enable continuing prosperity.

Yet, as of April 28, Trump has managed to spend 111 days of his presidency (or 22% of his time in office) at one of his organization’s golf resorts swinging a club, and costing taxpayers tens of millions of dollars in the process. In fact, there’s a Facebook page (https://www.facebook.com/trumpgolfcount) that’s devoted to Trump’s rising count. And this coming from a man who chided Obama, who spent a “tiny, tiny little fraction” of his time on the links compared to Trump.

We’ve also learned–from Trump’s own admission–that Trump’s day officially begins at 11am, after Executive Time, which essentially translates to TV and Twitter time.

So given Trump’s extreme schedule, I couldn’t help but wonder, “How on earth did Trump have the time to notice that “[my] name is no longer on [his] list of official Sustaining members?”

I passed on paying the dollar, rationalizing that there was no reason to contribute to Donald’s green fees.

March passed into April, and with a new month, it was time again to feed the political war chest, this time in the interest of national security–by parlaying an immigration crisis into a $25B resolution: building THE WALL.

Considering I had raised my objection to building THE WALL the month before, receiving my financial support was unlikely. In fact, I returned the survey with a comment, petitioning the president to consider an idea more fiscally responsible and in keeping with his laissez-faire principles: privatization. I proposed that he reach out to the Walton family, a fine upstanding bastion of Republican sensibility, and convince them to build THE WAL-MART, a very long and skinny store along our southern border. By day, the Mexicans could buy American, and by night our border would be protected by Wal-Mart security teams. Imagine the savings!

Trump never responded to my idea. Instead I got this: 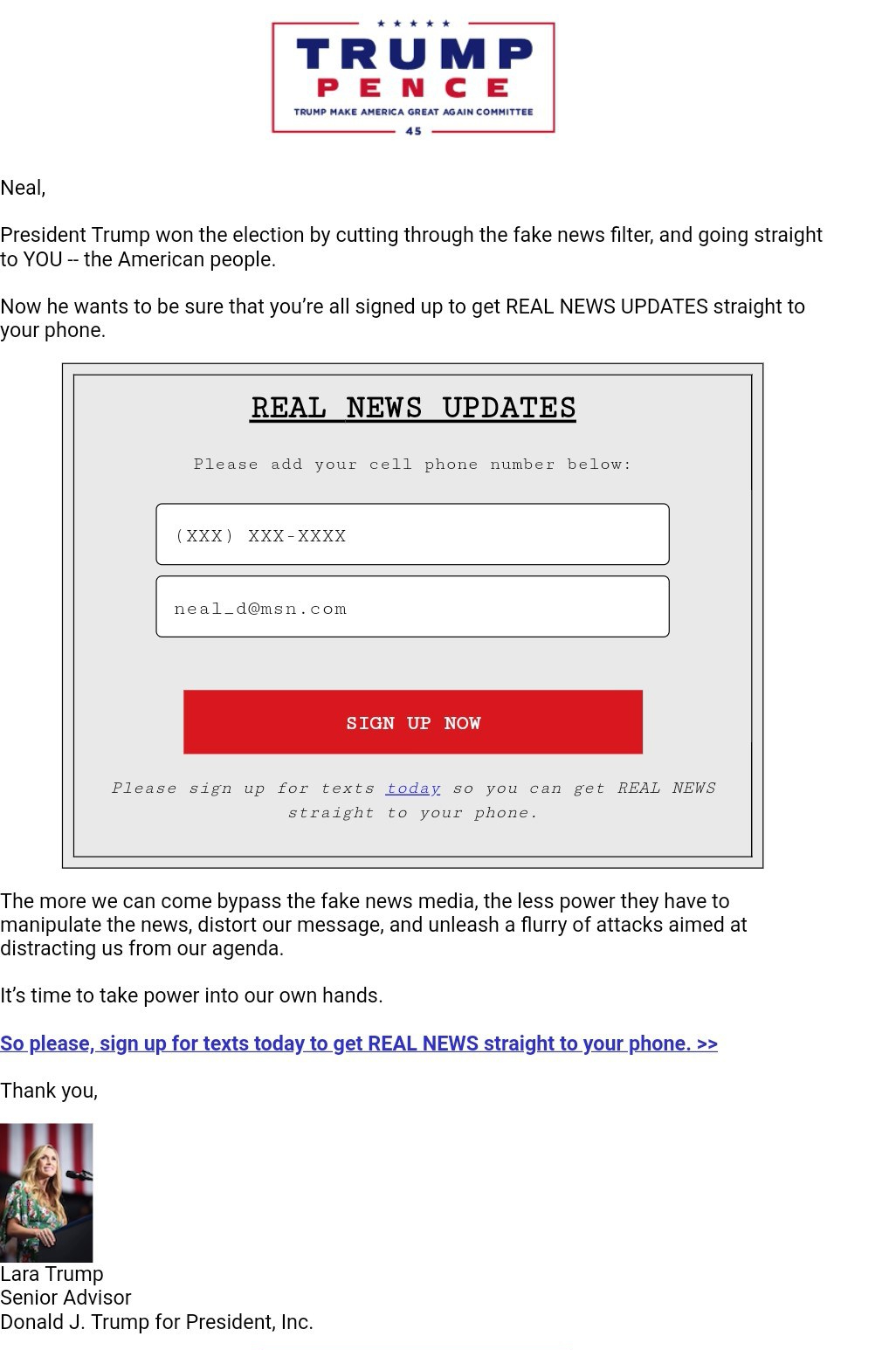 …an appeal to subscribe to Real News Updates, a weekly webcast hosted by Donald’s daughter-in-law, Lara Trump, wife of Eric Trump. Interestingly, no one was asking for money, just a commitment of my time to shower me with the real truth on Trump TV. However, after watching ten minutes of noise disguised as news, I found I didn’t have a nose for nonsense, as it reeked of propaganda.

Shortly after, I received another exchange from Donald recruiting me for another purpose: defeating LIBERAL OBSTRUCTION…

On what he called Trump’s “glacial pace in selecting nominees,” Senate Minority Leader Chuck Schumer posited, “If the President is looking for someone to blame on the slow pace of confirmations, he needs only to look in the mirror,” and suggests that the President should “roll up his sleeves and get to work rather than pointing false fingers of blame.”

Equally as astounding, was Trump’s White House personnel turmoil as diagrammed by The New York Times:

Even today, in the wake of Trump’s impending historic summit with North Korea’s Kim Jong Un, there is no nominee in place to head the South Korean embassy, and that’s on Trump.

After a week’s time, I received multiple invitations to renew my 2018 Sustaining Membership and I ignored them all, but then an email arrived from Mike Pence that was impossible to overlook. He was offering me a chance to win dinner and a picture with him in North Carolina. 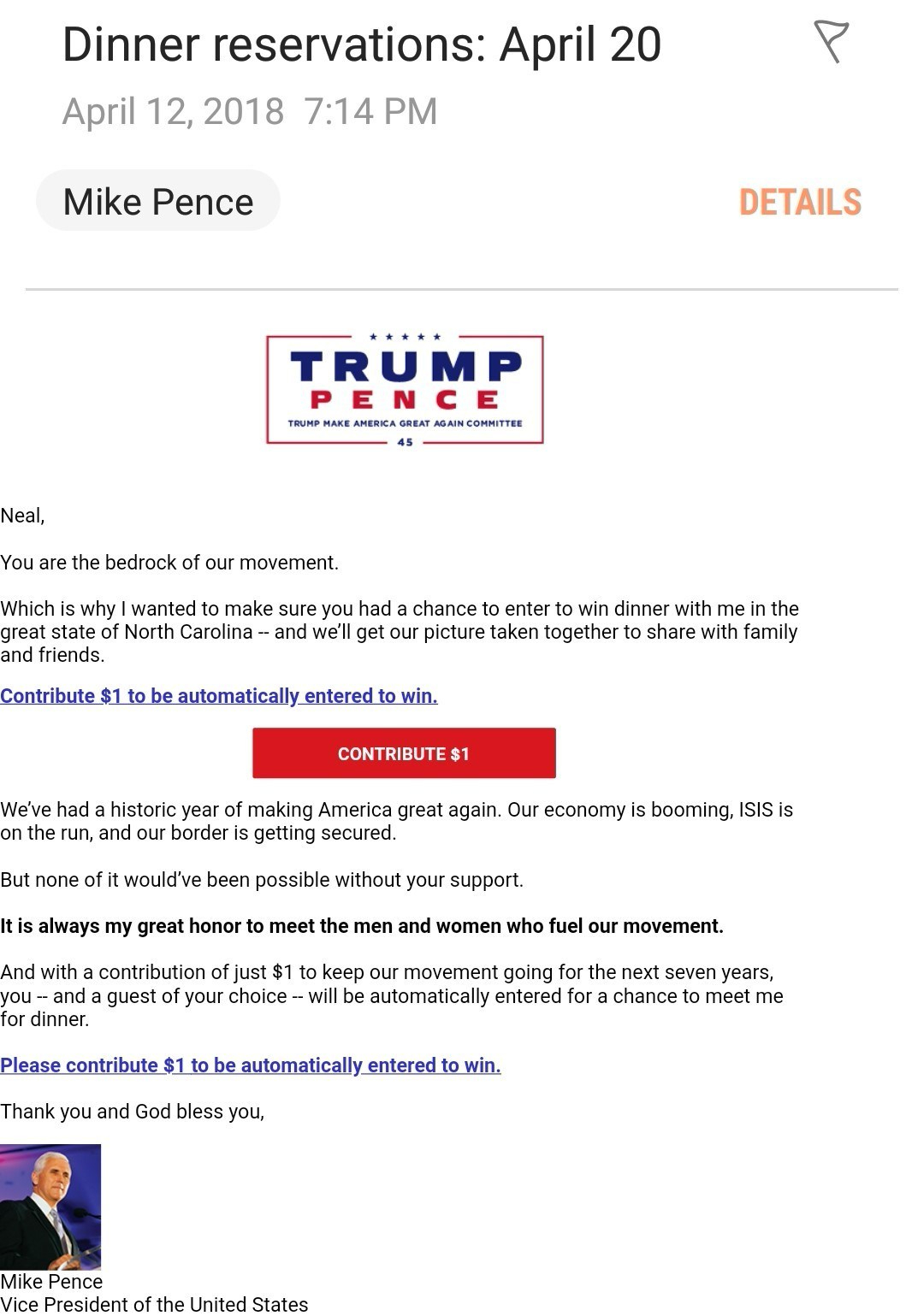 I checked my calendar to make sure I was available. I dreamed of the possibility of gnawing on BBQ ribs with Mike while listening to his sanctimonious defense of zygote life, his hypocritical defense of Trump as an adulterer, and his evangelical discourse of hysterical homophobia, as if he had been touched by St. Paul. I entered the contest…without a contribution…by discovering extremely fine print on the submission page that hyperlinked me to a free entry form, thereby sidestepping the requisite donation.

While I applauded my cleverness, no one called to tell me I’d won. I think I had Chinese take-out that Friday evening, and watched Real Time with Bill Maher instead.

A couple of days later, Donald reminded me that Melania’s birthday was approaching: 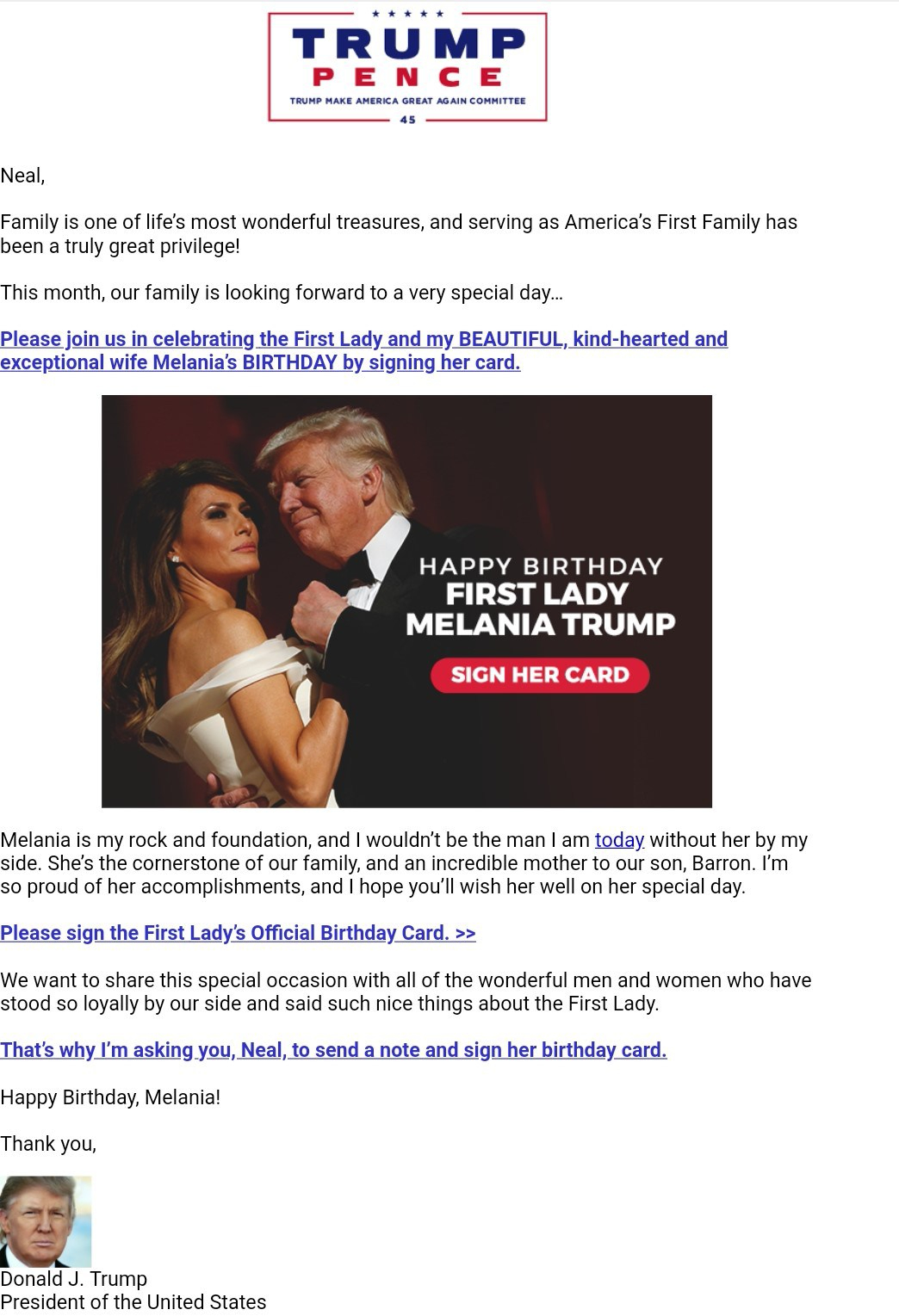 I was happy to sign Melania’s card, hoping that it might represent even the smallest distraction from her otherwise burdensome existence, and perhaps put a smile on her forlorn-locked face.

Oh, how she shrinks from Donald’s touch as he ceremoniously attempts to lock hands during so many pomp and circumstance moments when cameras are rolling, and oh, how she spurns his pussy-grabbing fingers, sending a silent #MeToo message to her coterie:

And then instantly, the news cycle abruptly turned to former FBI giraffe, James Comey’s imminent release of A Higher Loyalty: Truth, Lies, and Leadership. Naturally, Trump launched a preemptive strike that landed in my inbox : 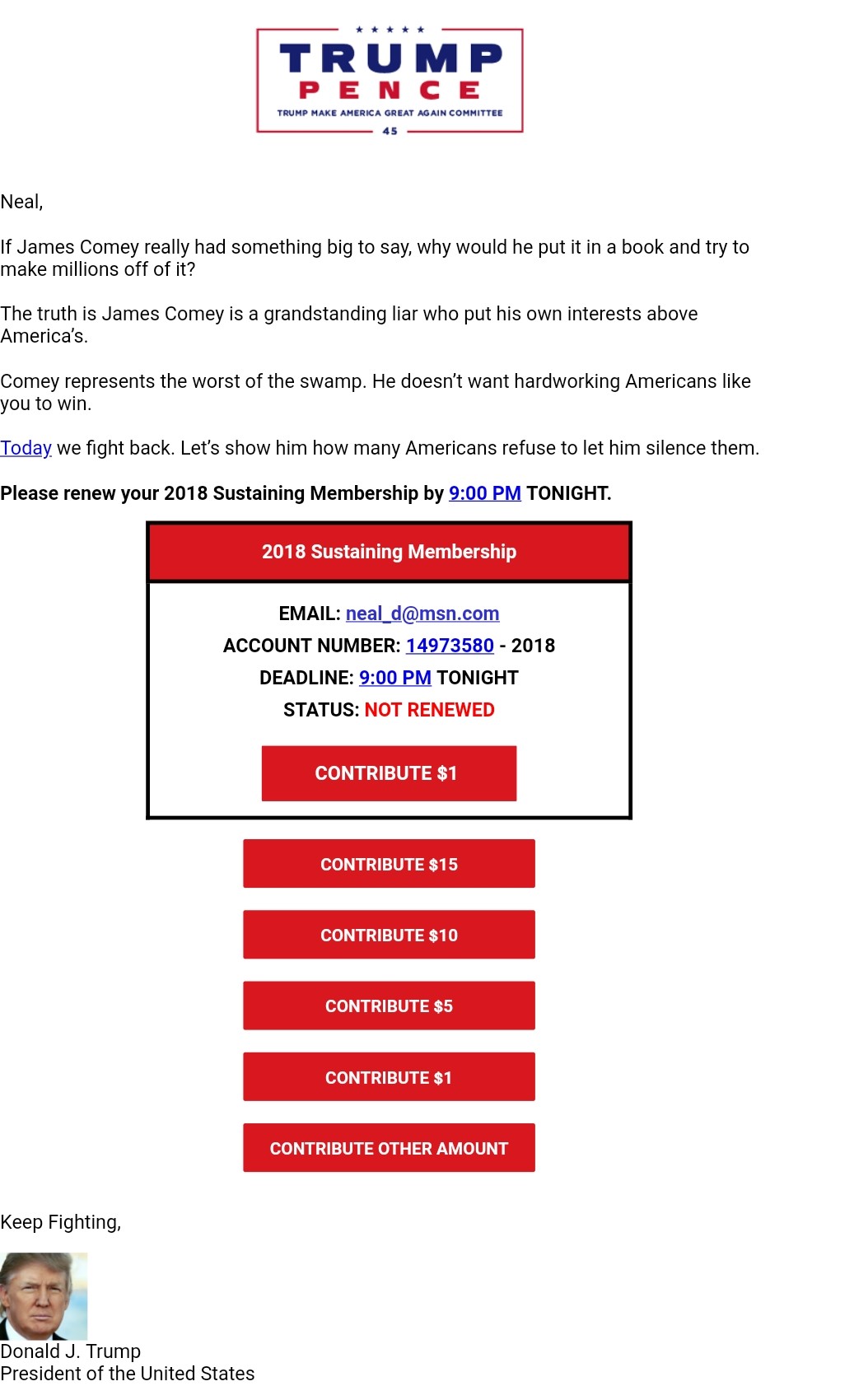 …even going so far as to transmit a less than scientific survey to his ardent supporters one day later:

Comey made the rounds of many a talk show, eager to tell his story, clear his name, restore honor to his bleeding Bureau, and peddle some books. But unlike Trump’s failed attempt to blunt free speech by trying to prevent publication of Michael Wolff’s Fire and Fury, all he could muster this time around was a weak attempt to disparage, discredit and dismiss Comey as a liar and a leak.

Yet, for Trump to accuse James Comey as lying is no different from a cesspool telling a septic tank that it’s full of shit!

With Trump’s ascension to the White House,

perhaps, the President’s residence should temporarily be renamed, Home of the Whopper.

Finally, Devin Nunes, chairman of the House Intelligence Committee and TrumPuppet released a final partisan report that the President had been expecting, and considered long overdue: 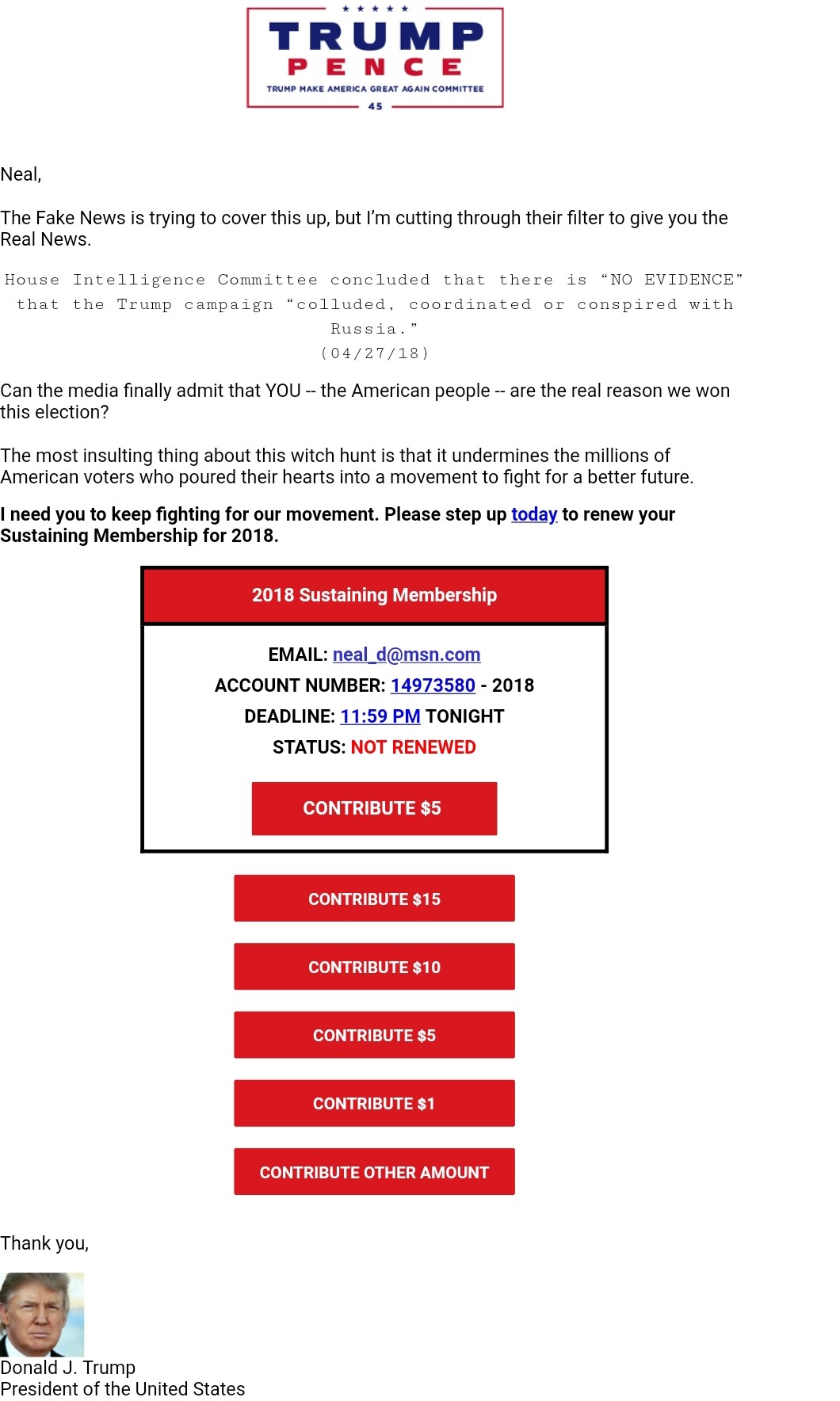 Of course, Donald had a shiny new object to distract his core, but the real crime was the damage done to a one-time prestigious watchdog panel once charged with rooting out intel abuses, but now acting as the President’s personal pit bull. By shutting down the investigation and claiming no evidence of collusion by refusing to interview anybody who might have had evidence of collusion was like pulling the ripcord while still inside the plane.

Over the past two months, I’ve received dozens of email communications from Trump and team–all designed to collect a dollar and a steal a soul–while observing a Republican Congress willing to embrace Trump at any cost. And although I was never interested in contributing a dollar, I was more than willing to offer my two cents.

That’s when I received this email:

I clicked on CONTRIBUTE OTHER AMOUNT, and was whisked to the secure Authorized Website of Trump Headquarters:

By selecting Other, my blinking cursor filled the empty box in anticipation of a big round number. I entered $0.02 and pressed CONTINUE.

Rejected! The campaign wouldn’t accept anything less than two bits. So here it is, Mr. President…two bits of advice: Stop lying to the American people, and resign before the real truth comes out!