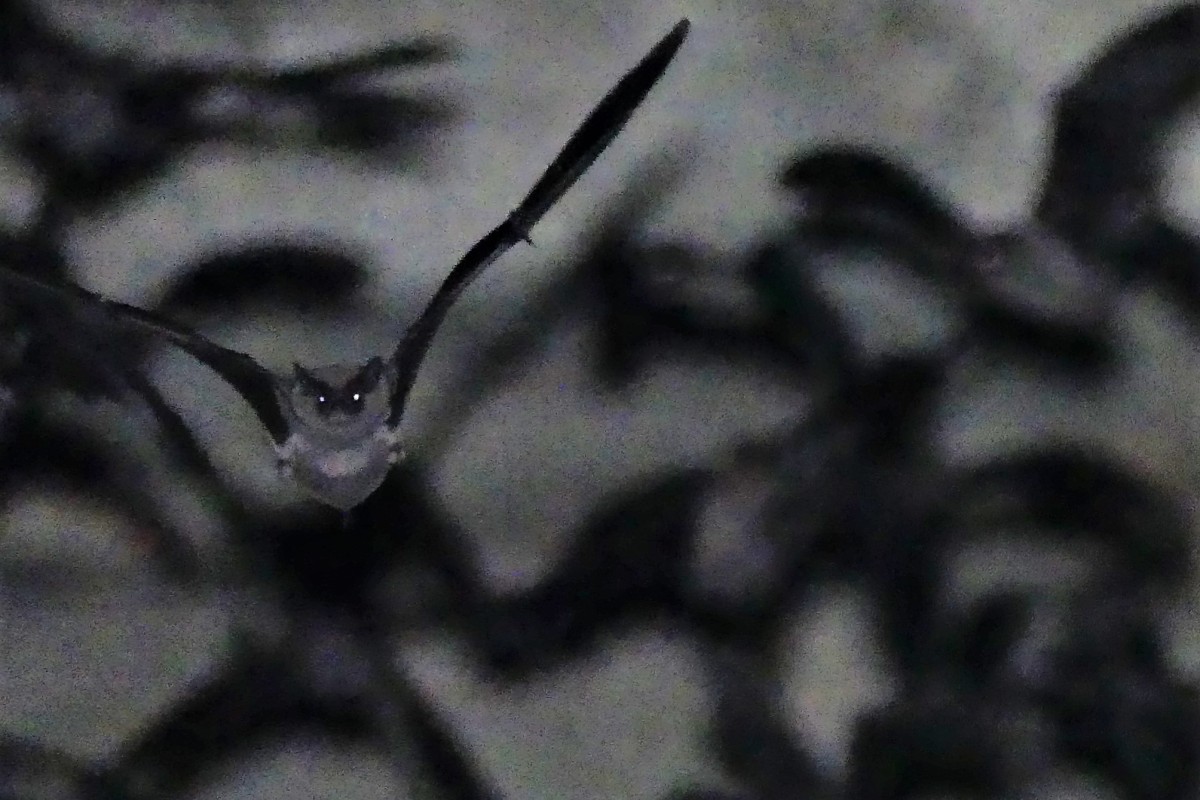 If you love the smell of ammonia (and who doesn’t), then Stuart Bat Cave in Kickapoo Cavern State Park should be on your bucket list. When approaching the entrance, the acrid smell of guano is omnipresent, and for good reason, since Stuart Bat Cave is home to 1 million Mexican free-tailed bats from spring through fall.

Each day at dusk, a stream of bats can be seen circling the mouth of the cave– approximately 25 feet across–around and around and around, accelerating to speeds of 60 mph until they explode from the darkness… 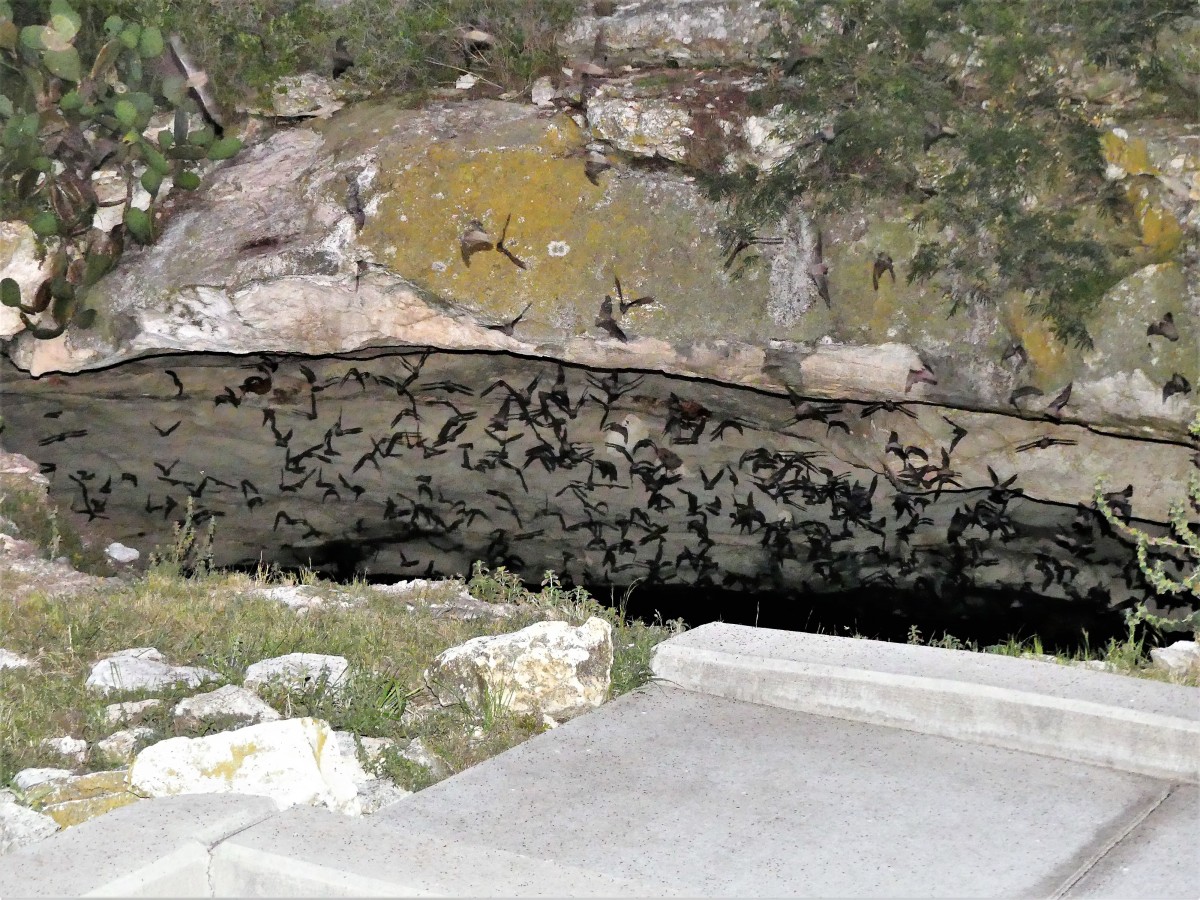 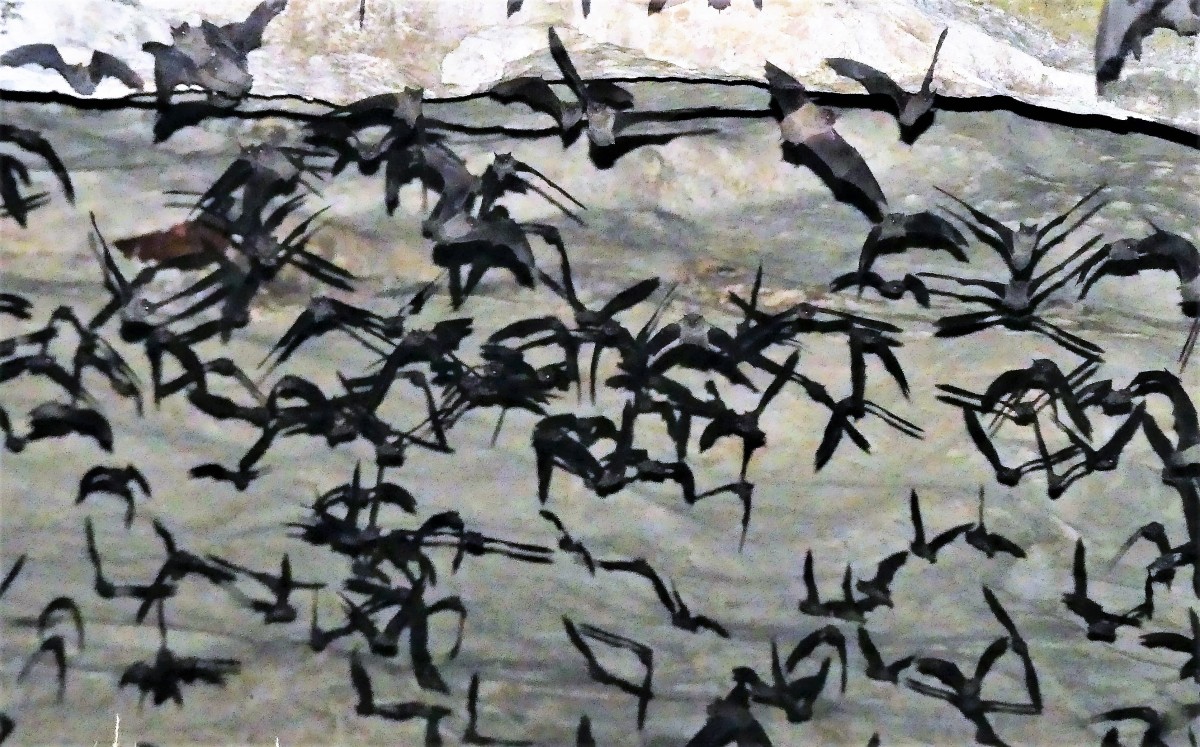 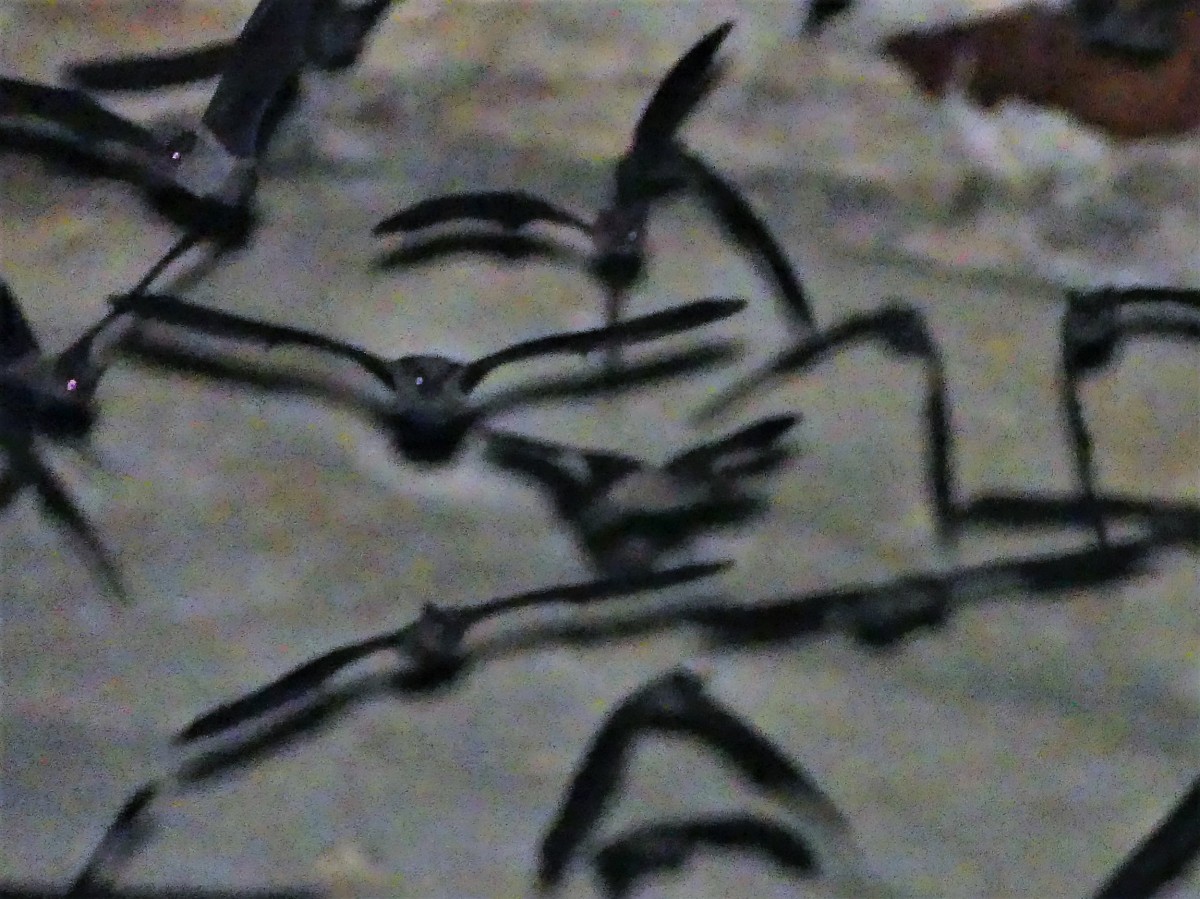 and into the twilight, fluttering en masse, up and over the trees. 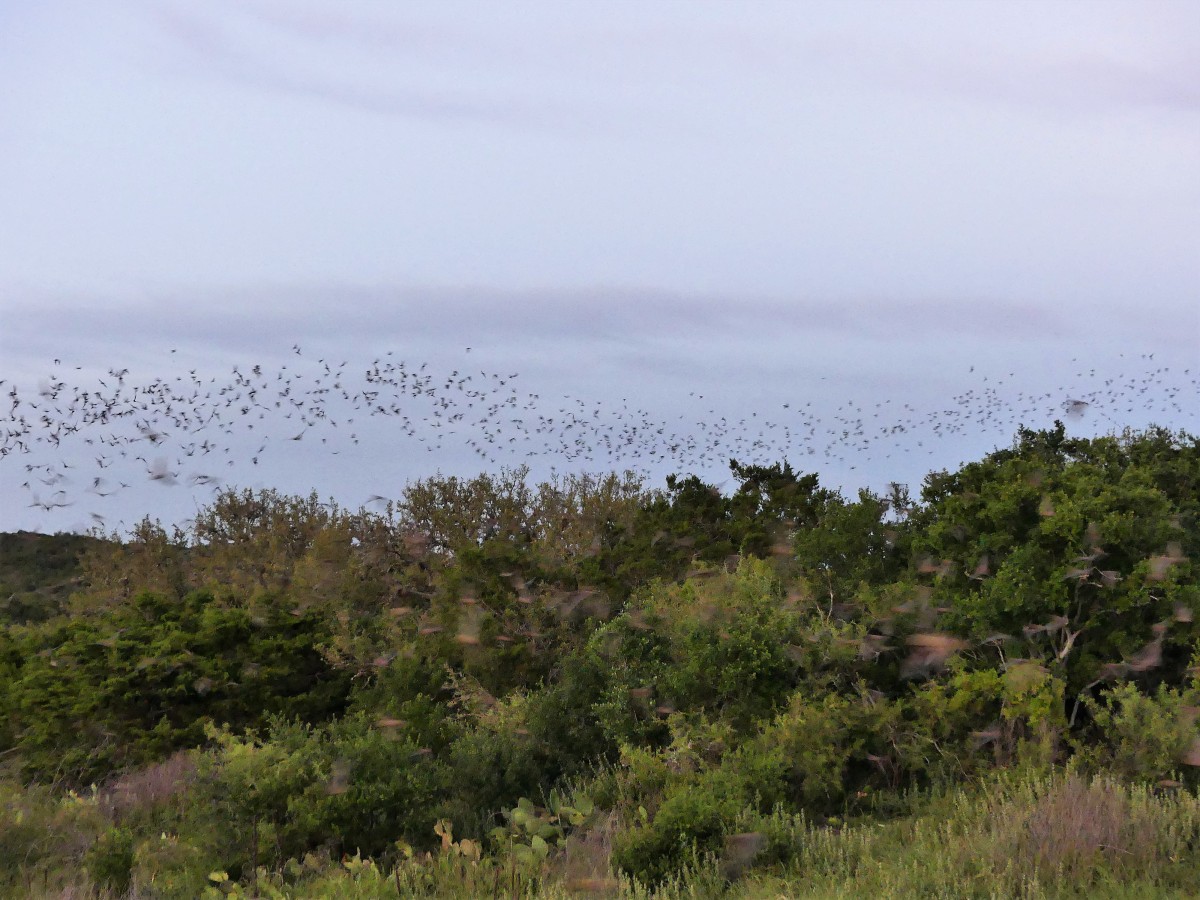 A continuous and frenzied swarm pours from the cave in a procession that could last up to two hours. 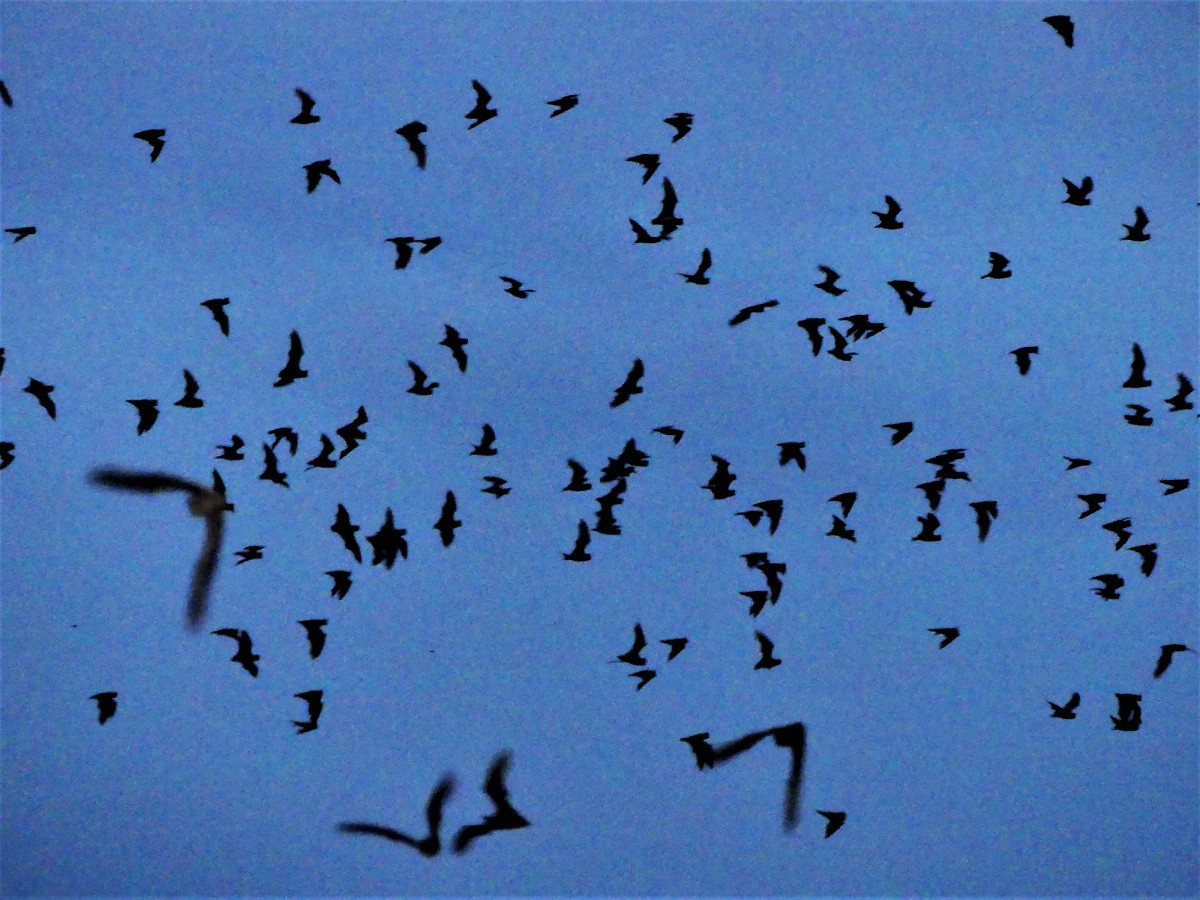 With the exception of some rogue bats that fly off in scattered directions, the mother lode hooks right and follows a path 50 miles due east to Uvalde in search of mosquitoes and corn earworms, a tasty moth that wreaks havoc on a number of Southern crops.

By the time they return at dawn, each bat will have eaten up to three-quarters of its body weight, which is collectively equivalent to 10 tons of insects, and easily explains the pungent odor by the cave. 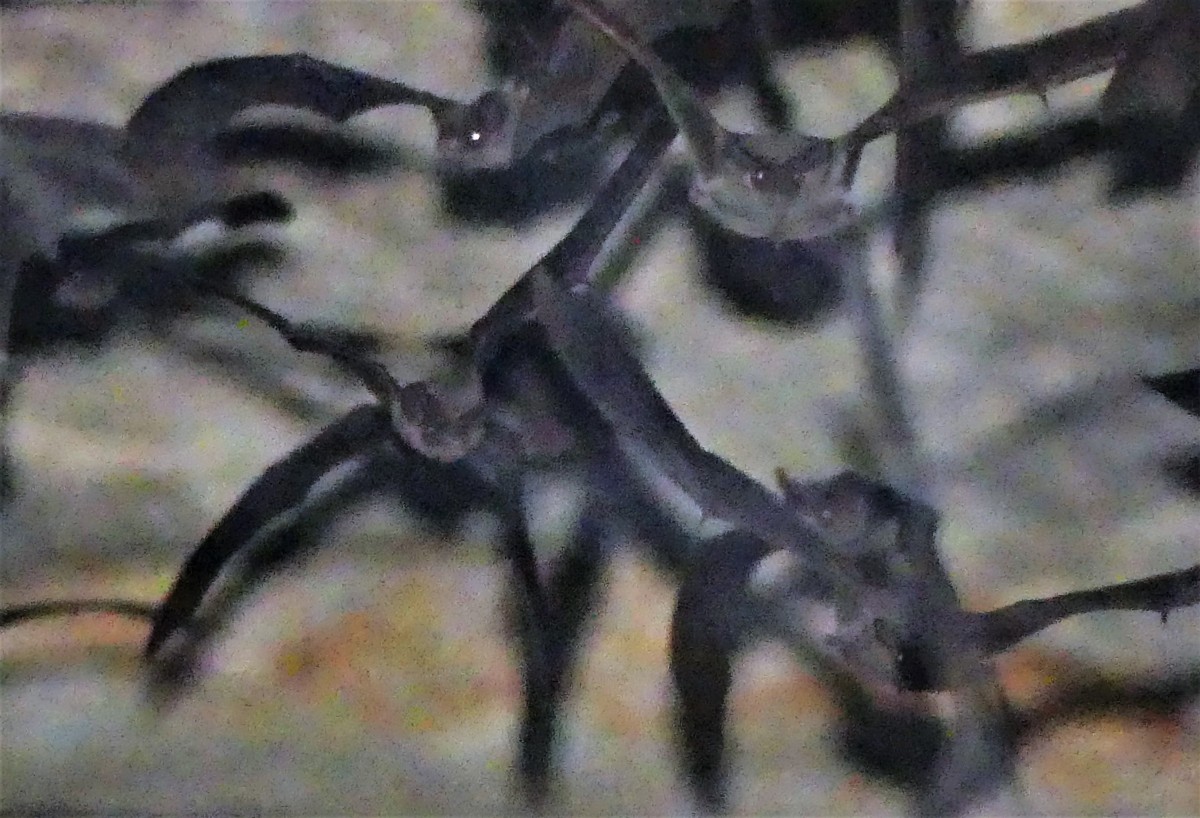 Historically, the Sergeant family, who farmed this property from the early 1900’s, protected the cave entrance with fencing in order to mine the accumulated guano, which provided important income to the ranchers until 1957 when sold as premium fertilizer and an explosive constituent. 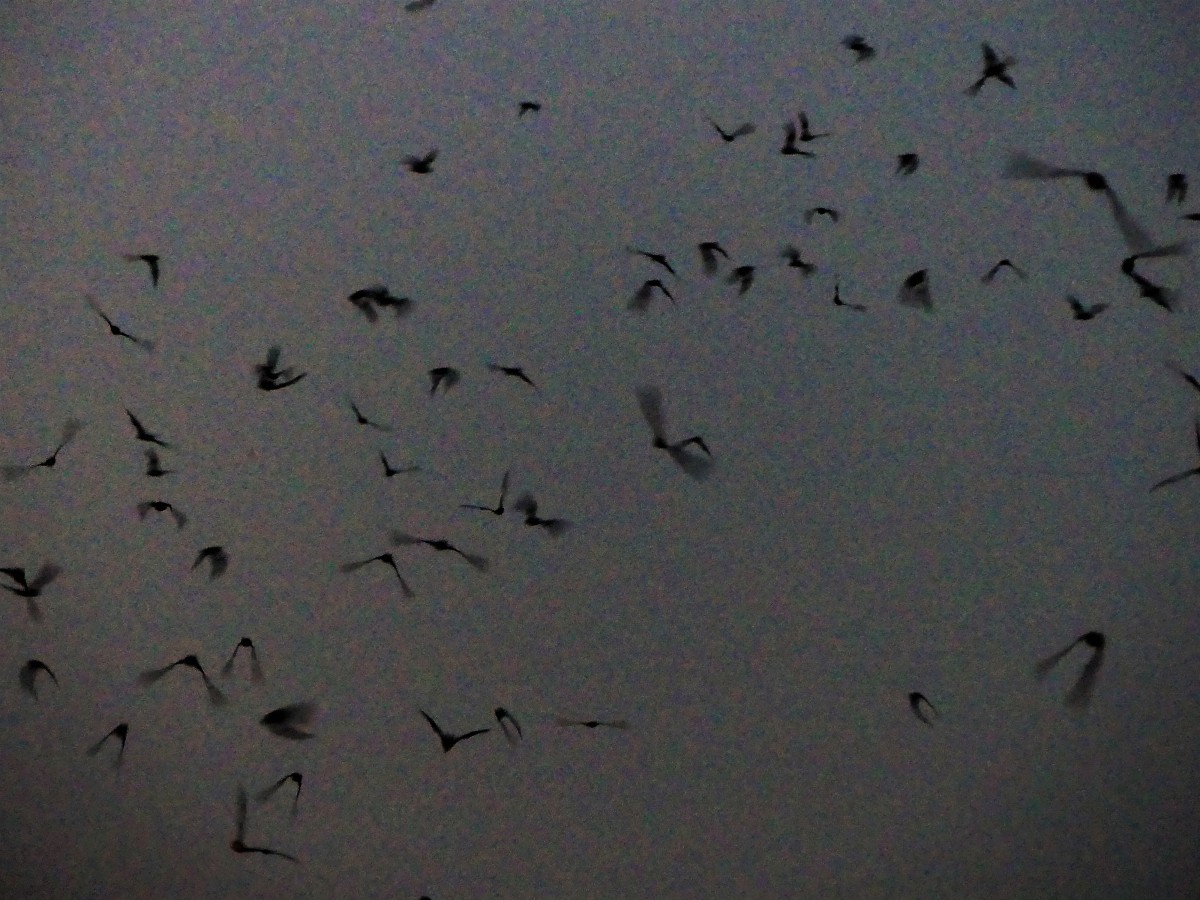 Having over-nighted for three days in the park, I can testify that there is no shortage of annoying bugs here. Not to be selfish, but I’d like to propose that some of the bats stay behind and clean up inside the park’s perimeter. If the bats only knew that they could dine closer to home–forsaking the 100-mile round-trip–then I could better enjoy my outdoor dinner plans as well. 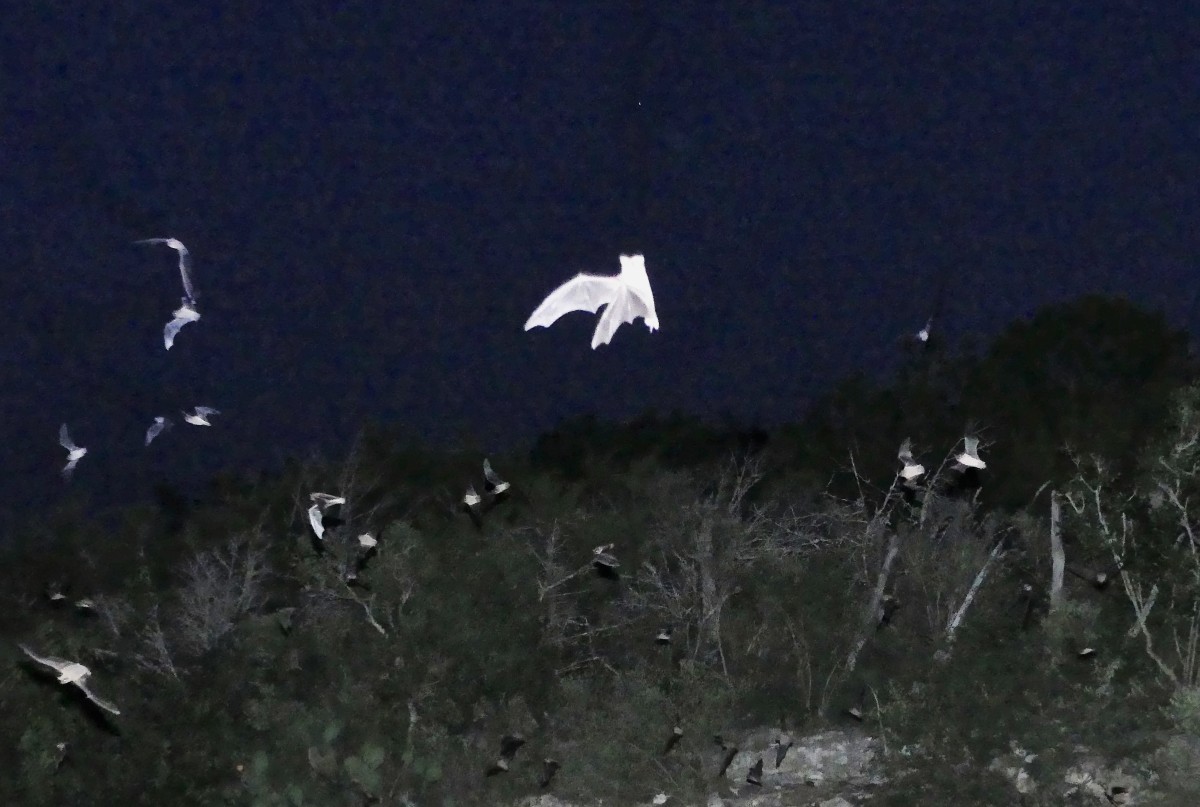 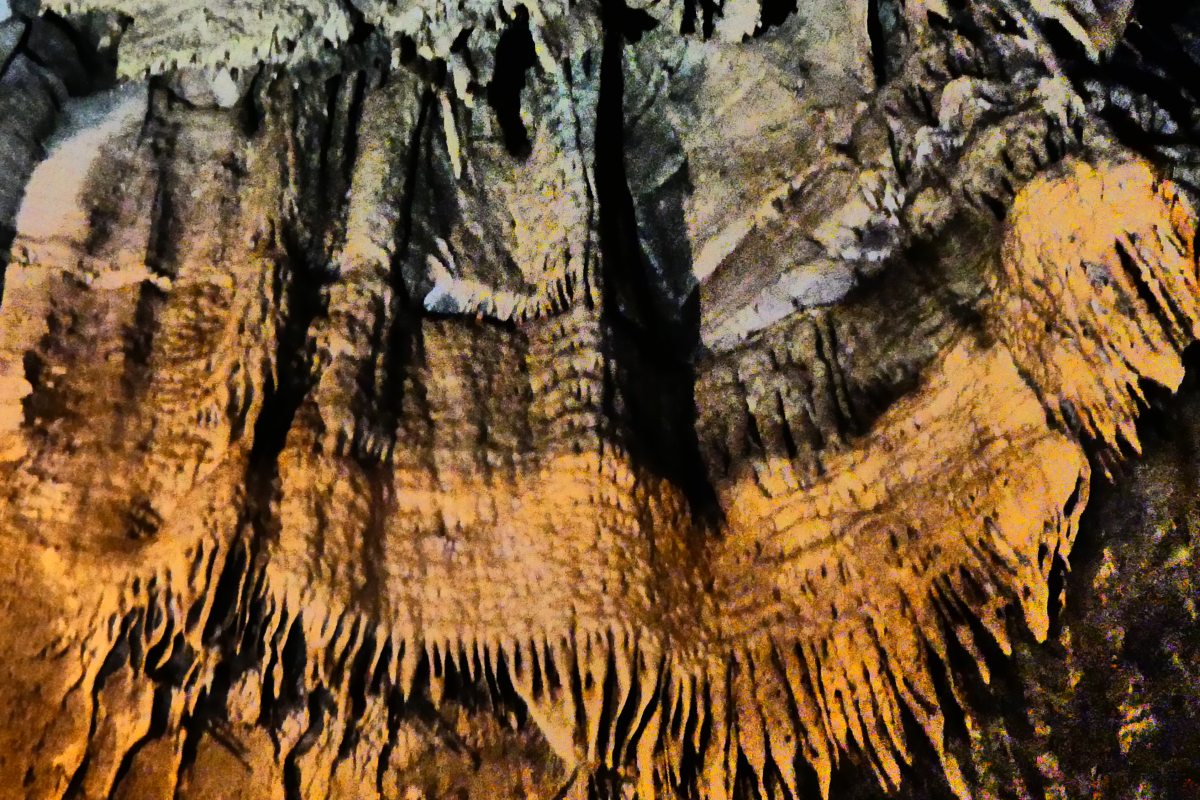 Well, it matters to a lot of folks near the bottom of Kentucky, where the National Park Service legitimized Mammoth Cave as the 26th National Park in 1941. And it matters to lots of Black Americans whose slave ancestors have recently gained recognition as some of the earliest cave explorers before the Civil War. Of course, the biggest irony is that the most qualified cave guides couldn’t get work at the cave once the U.S. government took over the concession.

Stretching more than 400 miles in all directions, Mammoth Cave is the largest subterranean cave network in the world, with geologists speculating that another 600 miles of caves have yet to be discovered. But what cave explorers have mapped thus far, has brought international tourism to this area, and turned spelunking into a regional phenomenon. Hardhats with headlights are de rigueur in Edmonson County. And children nag their parents for facsimiles in the park and hotel gift shops.

Reservations during peak season are strongly recommended by the Park Service as tickets are needed for cave access, and group sizes are limited. Upon arrival, we were disappointed to learn that spring-breakers had overwhelmed the demand, and we’d be shut out during our stay in the park. We reluctantly accepted a self-guided tour that was underwhelming, albeit we learned that the cave had once been a mine for sluicing saltpeter (an essential component of gunpowder) during the War of 1812. 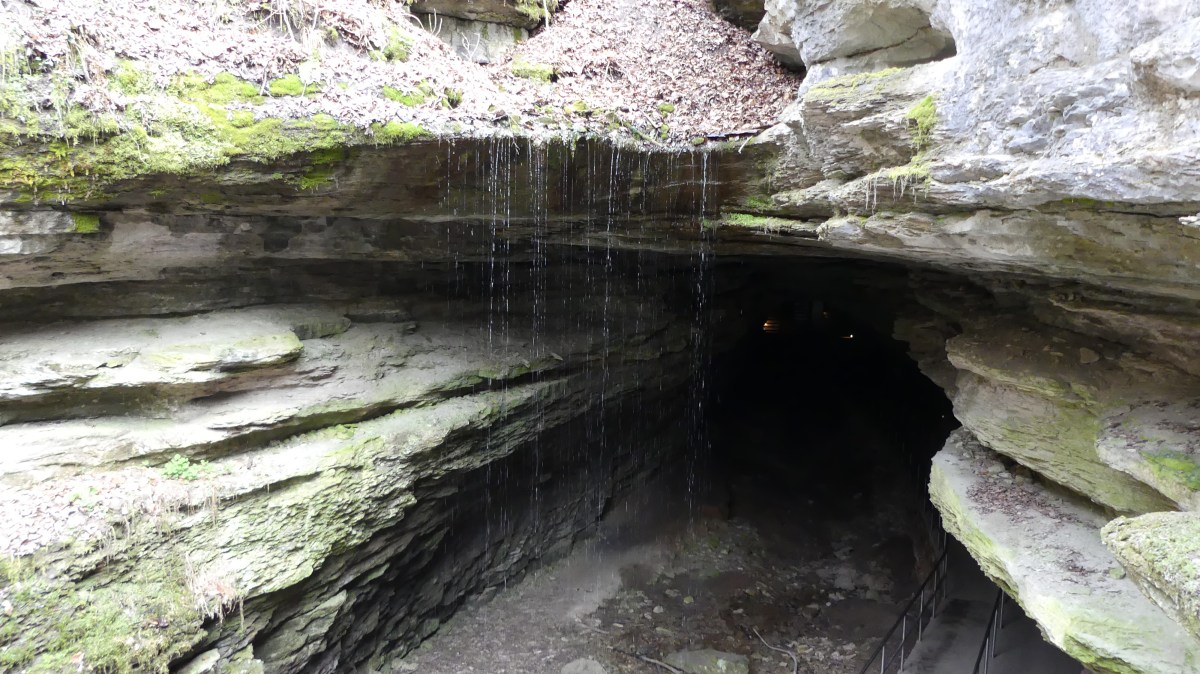 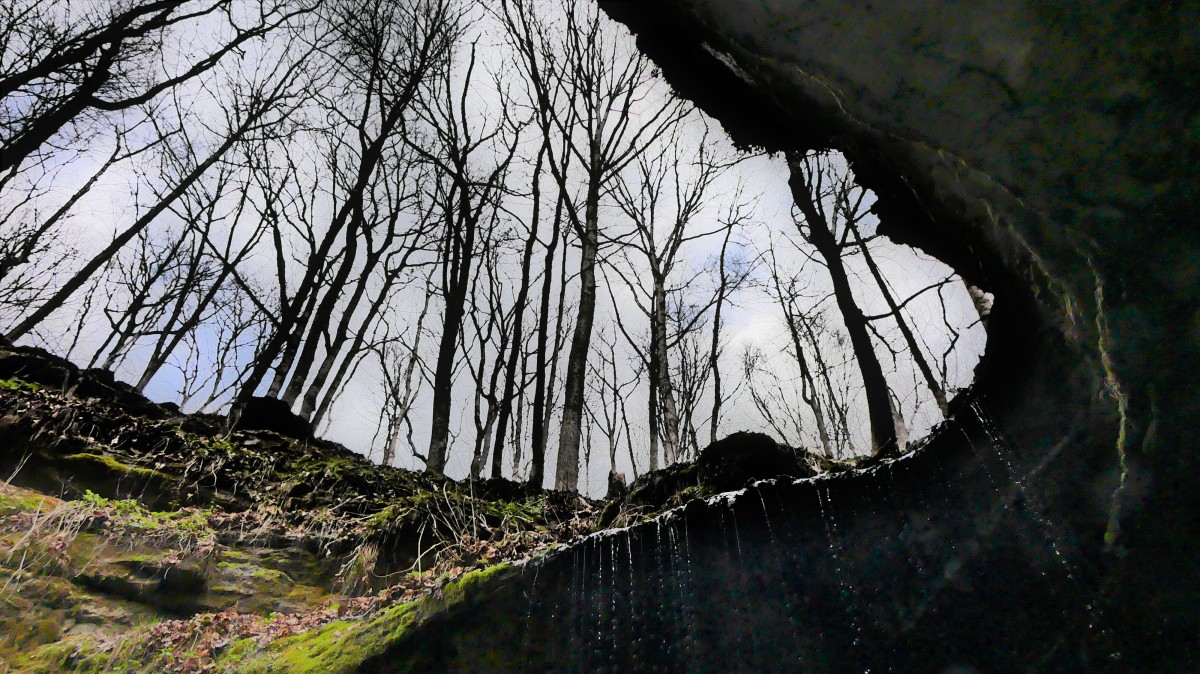 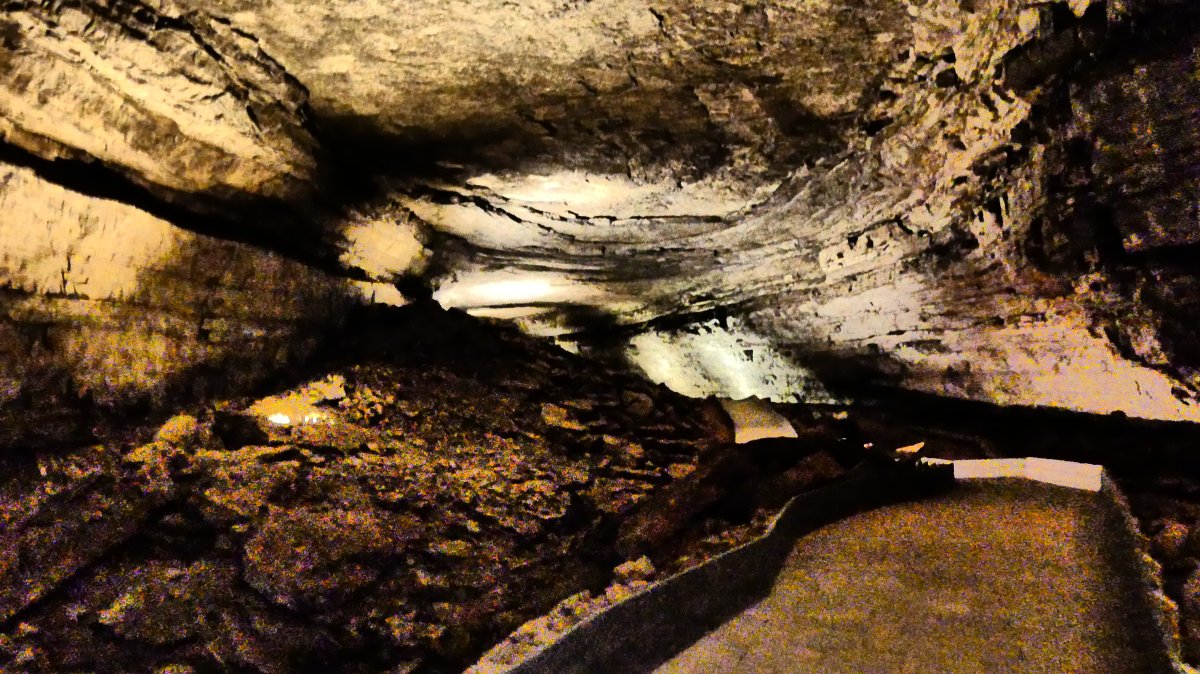 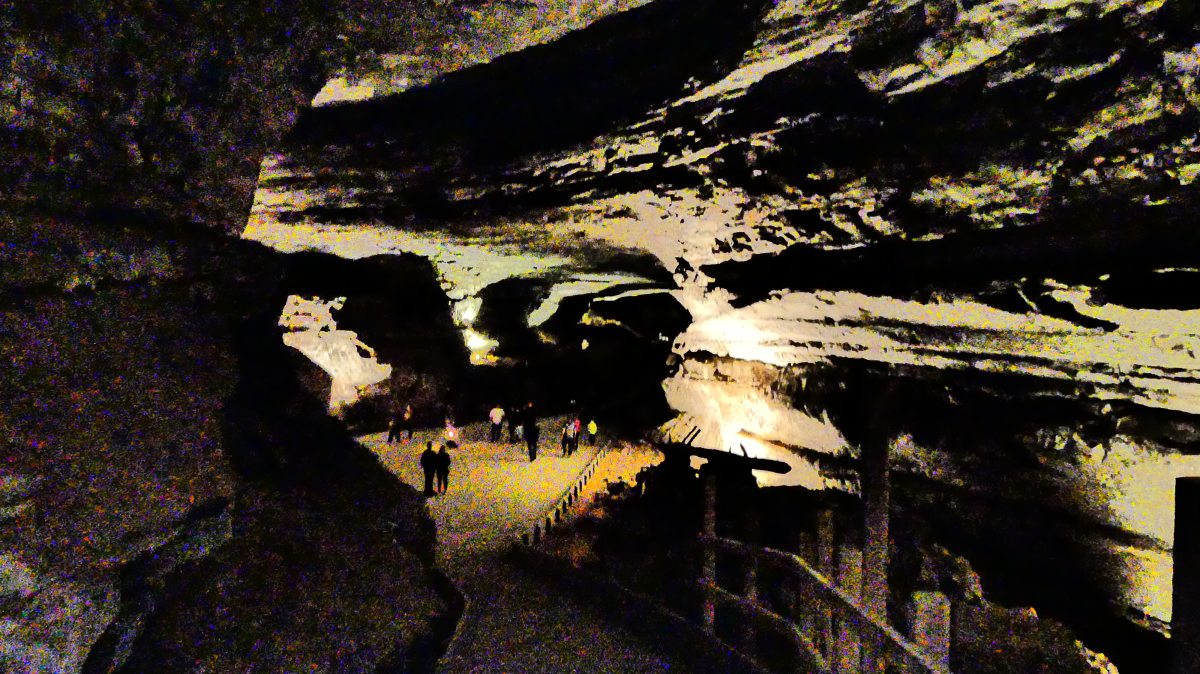 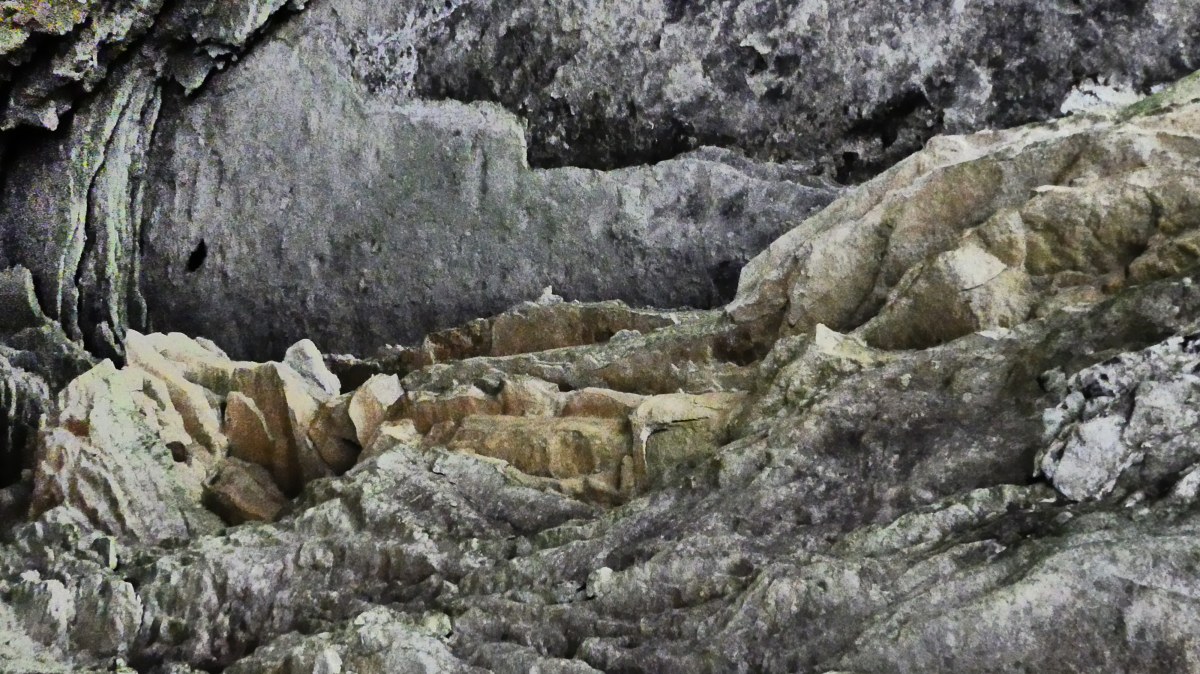 We later discovered that the park offers 16 tickets for the Frozen Niagara tour to the lucky few who are willing to wake up early and stand in line the following day when the ticket office re-opens at 8:00 am. Leah arrived at 7:45 am to find a lengthy line which didn’t bode well. With a little misdirection, she managed to cut the line, and snagged two tickets.

We boarded the bus at 9:45 am after a brief safety introduction by Ranger Jerry Bransford.

The ride to the cave gave Ranger Jerry a chance to tell the story about his great-great grandfather Materson Bransford, who along with Nicholas Bransford and Stephen Bishop became the first to guide the curious through the darkness holding candles.

His kin welcomed royalty and celebrities from around the world, including Jules Verne, Ralph Waldo Emerson, and Gen. George Custer. What a scene it must have been for the rich and famous to heed the commands of slaves while underground, only to be castigated as slaves when they resurfaced.

It was after a 30-year career in manufacturing, and a 55-year interruption of Bransford know-how, that Ranger Jerry accepted an invitation from the park service to continue the legacy that started four generations ago, and return as a Mammoth Cave tour guide.

Since Mammoth Cave is known to be a dry cave, there is insufficient dripping water to mix with limestone to form stalactites from the ceiling and stalagmites from the floor. However, Frozen Niagara is a rare exception for having a subterranean river that flows overhead, producing spectacular formations that continue to drip and grow, as they have for the past 250 million years.

Uncharacteristically, the bunker-like entrance to the cave yielded to a revolving door. The last one in had to volunteer to lock the door from the inside. On the way down into the tunnel through a narrow passage with low ceilings is when I yelled at Leah to “DUCK!” while she was looking for her feet in the darkness and heading towards a ceiling with no clearance.

“Owww, FUCK!” she yelled, her head bouncing off a knob of stone. It was only minutes ago that Ranger Jerry forewarned that “someone on this bus is gonna get ‘brainrock’ goin’ through the passage, so BE CAREFUL!”

I saw it happening in slow-motion, and I was powerless to stop her. I reached over to massage a knot beginning above her hairline that was fast-turning into a knob—almost a mirror-image of the stone she crashed into.

A woman yelled behind me, “Hey, thanks for the warning.”

“Look Mommy, I’m getting down on my hands and knees,” her daughter said.

“Get up, Cindy. The nice man said you can’t touch the rocks.”

The tour continued to a 200 ft. shaft of carved and decorated rock that plunged into a pool. We got to stand somewhere in the middle between top and bottom of this opening which made it hard to decide whether to look up or look down. Either way, it was breathtaking. I was delighted to learn that stainless steel railings would lead us to the bottom, providing another remarkable perspective. 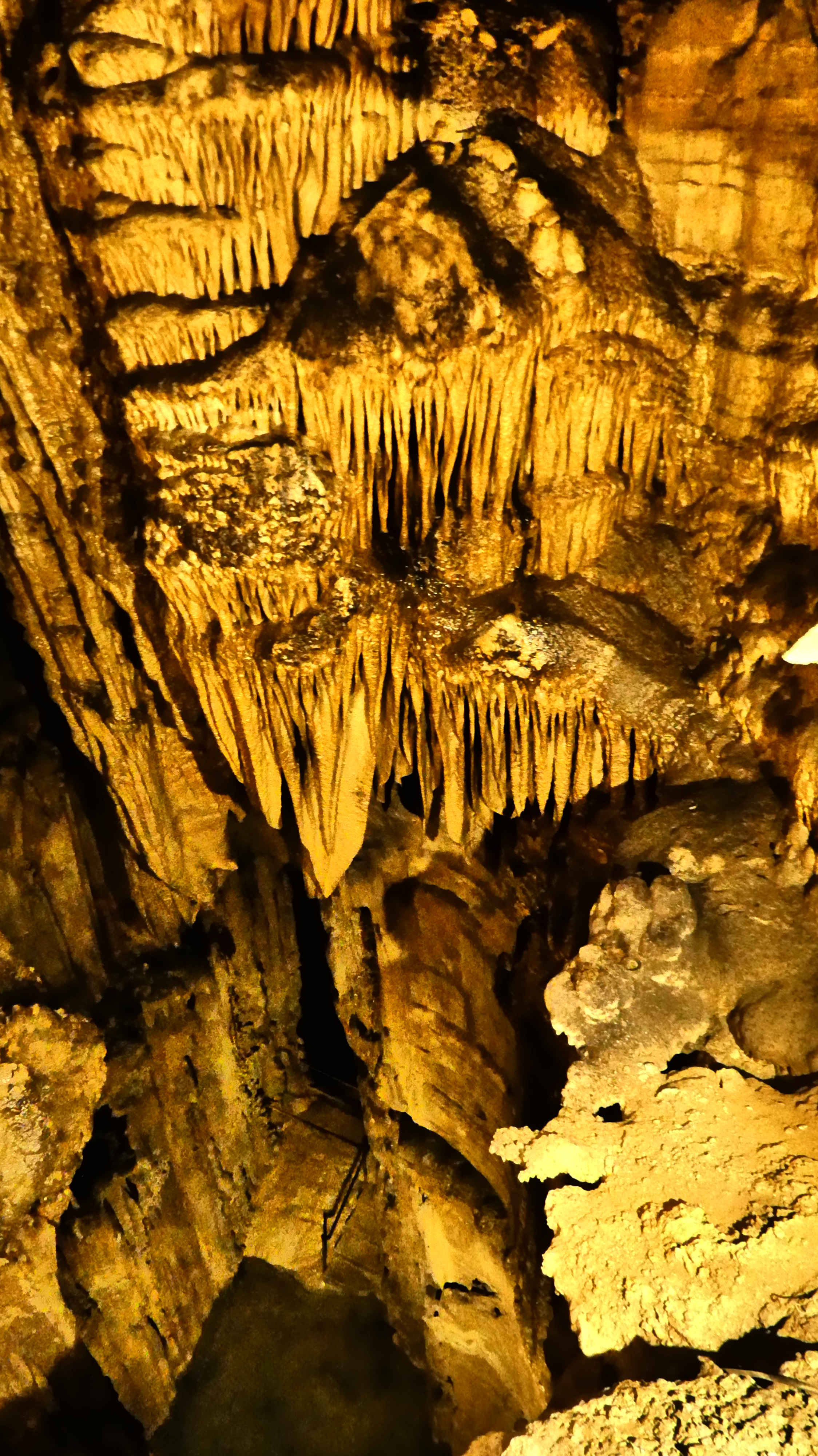 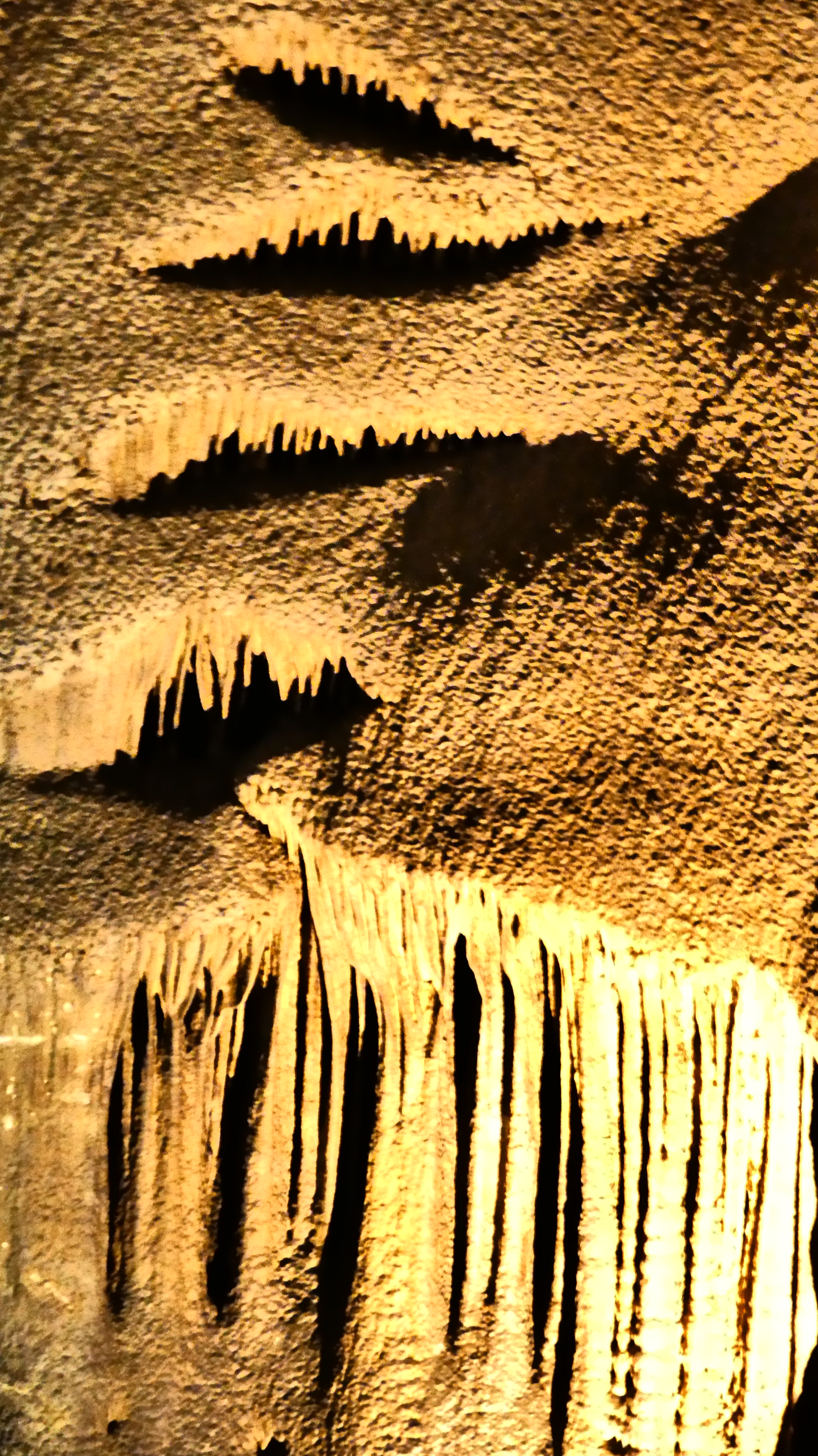 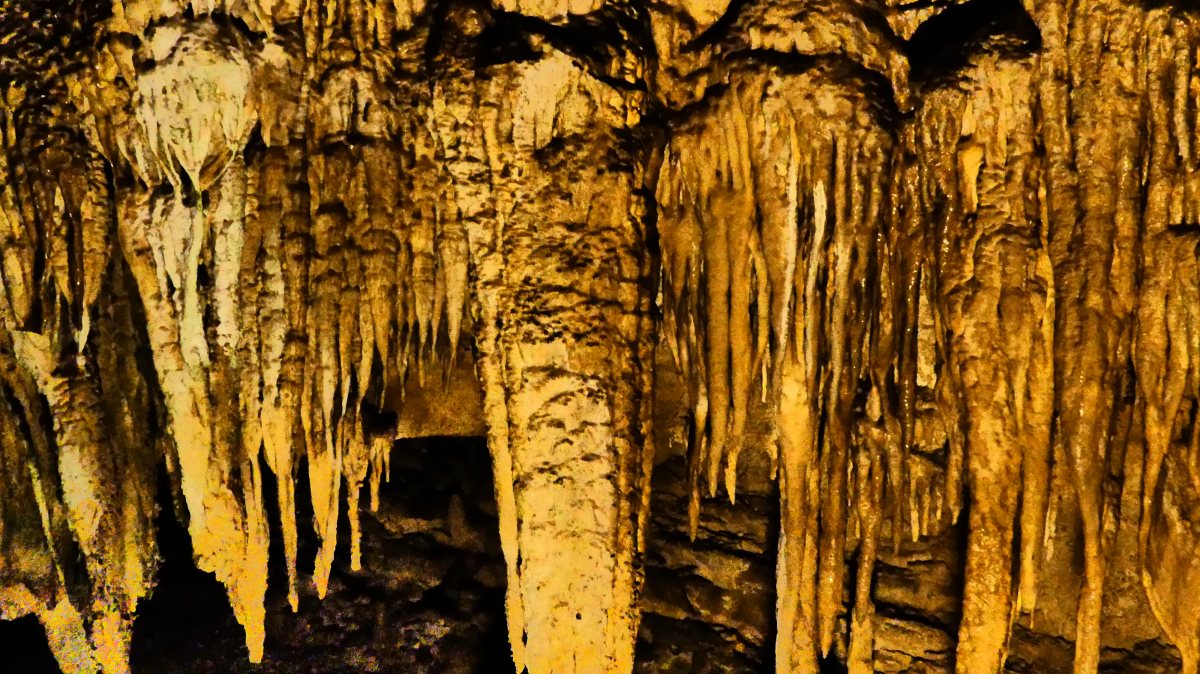 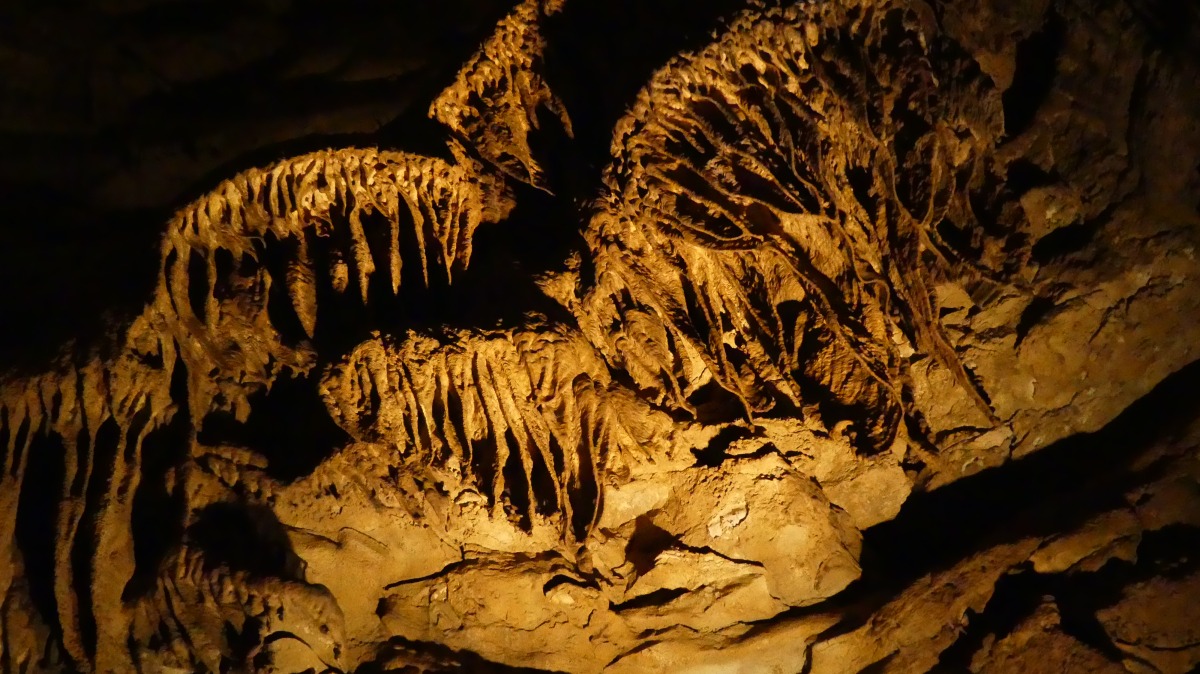 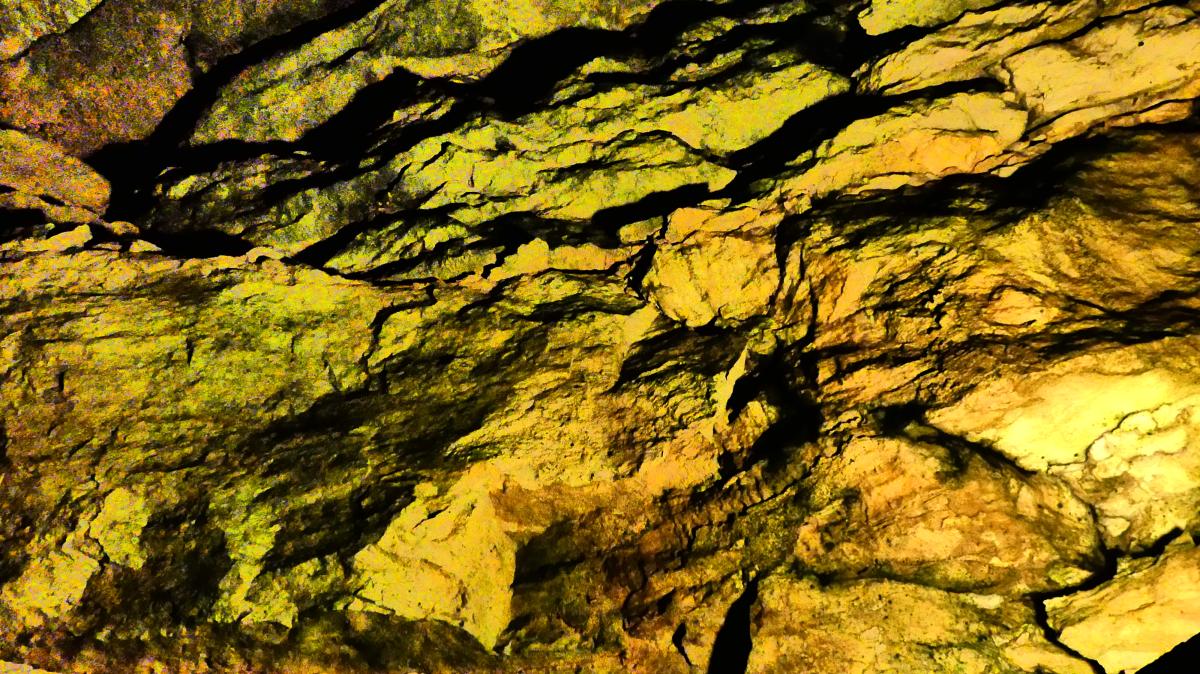 At the conclusion of the tour, the passengers were directed to a gangplank lined with spongy mats soaked with Wool-Lite and water to decontaminate the soles of our shoes from possible exposure to “white nose”, an invasive fungus that has claimed more than 6 million bats in the past 5 years, and has appeared in 29 states to date. The original carrier was known to be an amateur English spelunker who brought the fungus across the ocean on his caving equipment. As a child, Ranger Jerry’s kin would tell him stories about ceilings so thick with bats, that you could feel the room quivering. But not anymore.

Ranger Jerry shook my hand at the end, and gave me his card. He wanted me to share his story. I would have liked to record Jerry’s story during our bus trip. Unfortunately, the idea occurred to me halfway through his spiel. But redemption came when I approached the exhibit area and discovered a video of Jerry’s interview playing on a small kiosk monitor. The audio portion was captured and may become available at a later date if I choose to upgrade my subscription for an additional expense.

In the meantime, the New York Times carried the following travel feature about the historic Bransford connection to Mammoth Cave: