Hiking along New Jersey State and County Park trails the day after Thanksgiving made a lot of sense to Leah, who orchestrated our first return to New Jersey since moving to St. Augustine five months ago. She promised a whirlwind week and a-half of personal appointments and commitments packed with a variety of doctors, friends and family members, all laced with an emphasis on over-eating.

And so, during the course of our visit, as advertised, our food-centric itinerary always included a meal punctuated by scintillating table conversation on family history and folklore–touching on recipes, obituaries, and kin outcasts, with politics and religion occasionally creeping into the dialogue.

But mostly, everybody seemed to be preoccupied with their health. And God help the person who would innocently ask, “So, how are you feeling?” Because this question would open the floodgates for respondents to freely reassign their HIPAA proxy on the spot so they could casually discuss their current condition down to the last agonizing ache and pain, notwithstanding the severity surrounding their prognosis and course(s) of treatments, always followed by a couple of random doctor-horror stories.

It seemed like everyone had a health-related story to tell–whether it was about themselves or someone they knew–not unlike my parents and their friends, who would gather at holiday occasions to compare notes about their medication intake. It was uncanny that the of crux of nearly all of our relationships was now firmly rooted in our faded glory and eventual demise.

Any outsider, after eavesdropping on any of our sessions of non-stop kvetching might be surprised to learn that we are still breathing and have more than one day to live.

And so, it was predictably refreshing to carve out some time to clear our ears of prescription patter, and find an activity that combined friendship and calorie burning. Of course, our opportunity to hike was completely weather-dependent, considering the prior Nor’easter and the Arctic chill that had settled on the Atlantic states.

Like many Northern transplants to Florida, Leah and I had become preoccupied with weather-watching, so we might bask in the warm glow of knowing that we had finally escaped the unfriendly winters by relocating to St. Augustine. But now that we were back in Jersey, it was time to face the hard cold facts of winter; Ramapo Valley Reservation (NYNJTC_RamapoValleyCountyReservationMap-2017) was 18°F at the Reservation trailhead, and expecting to peak at 23°F by the afternoon. 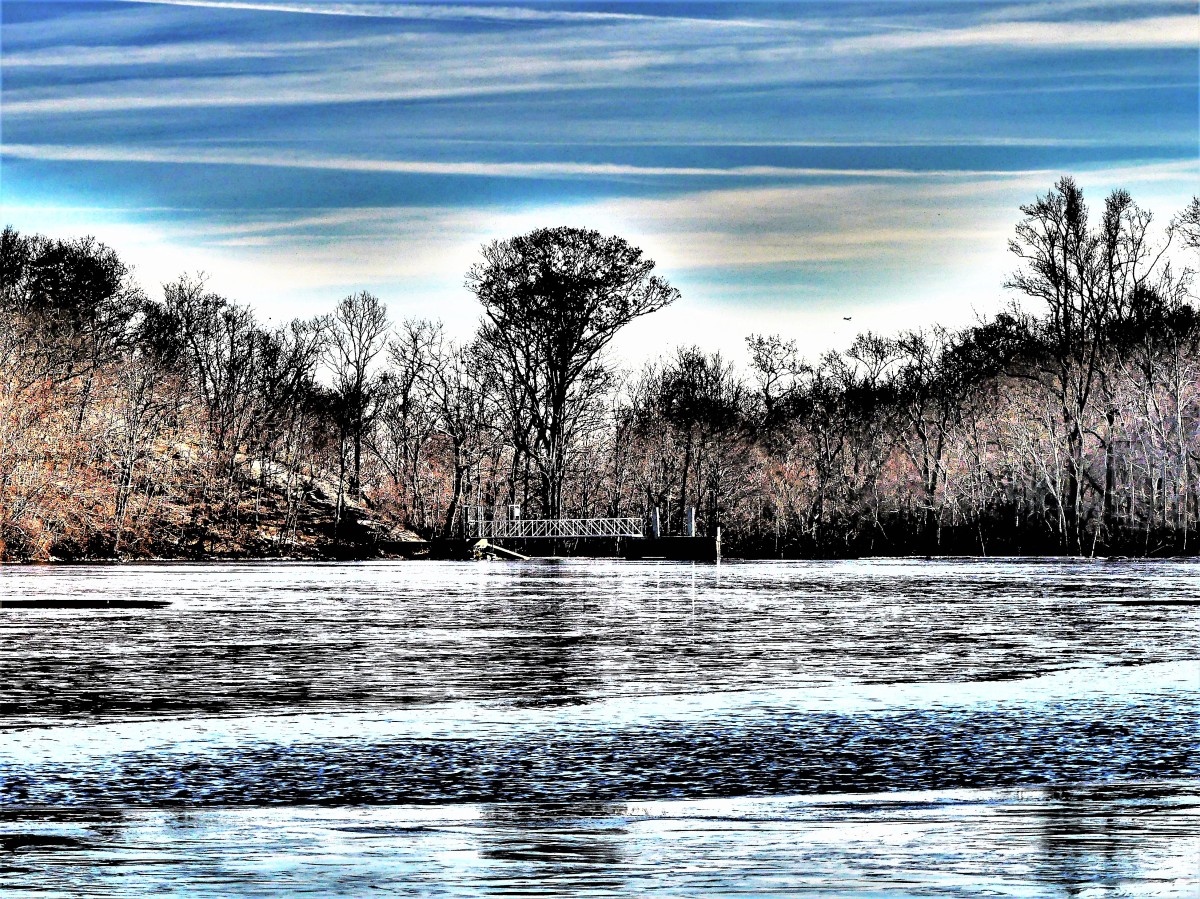 with the exception of distant water reflections.

Brooks were running fast and high… 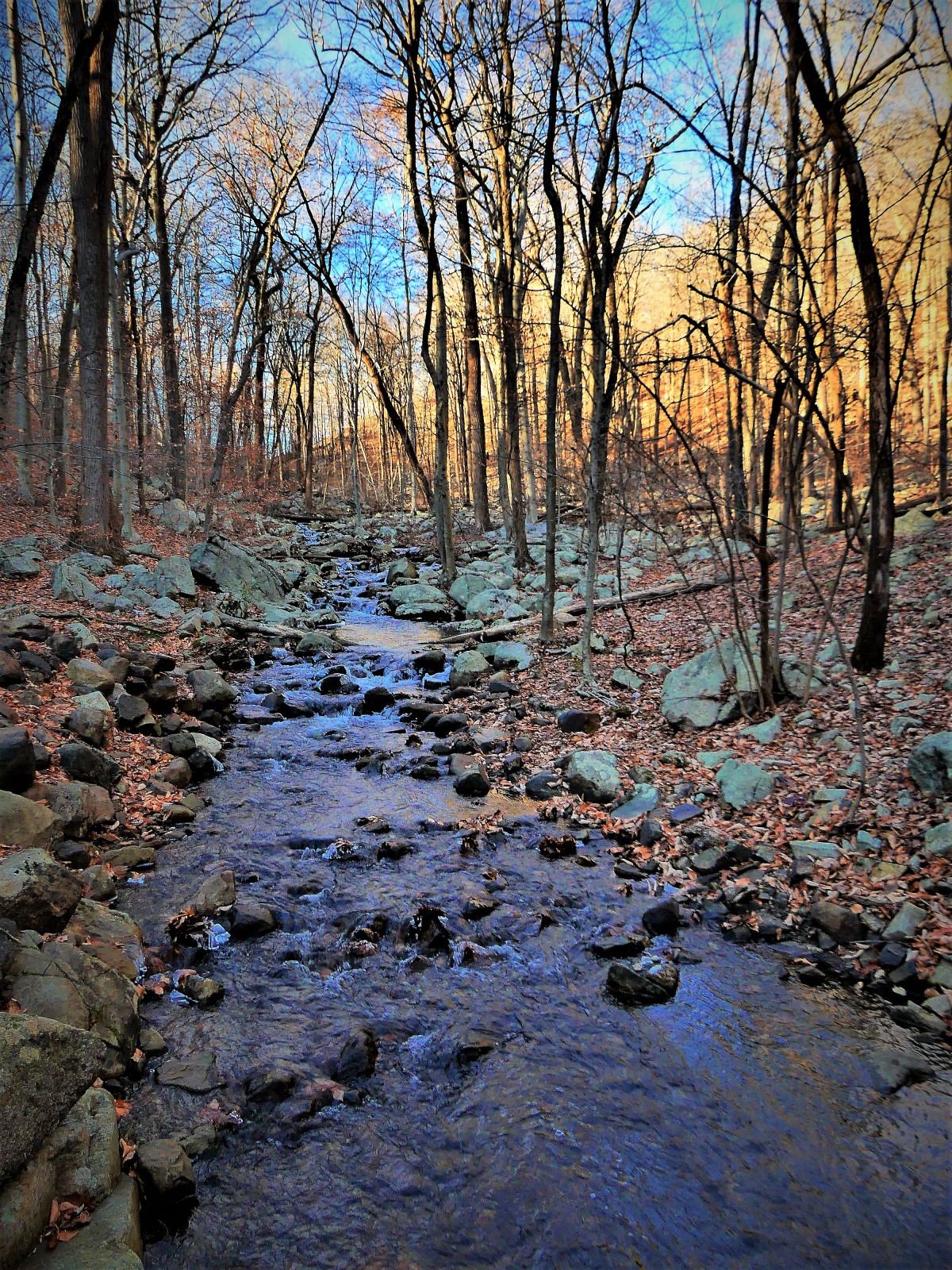 making each water-crossing challenging and hazardous.

We continued our four-hour excursion with the winds picking up across Campgaw Mountain.

And it became clear to me that marching through the New Jersey woodlands was not the best birthday present I could have given myself. The cold had already taken its toll on Arlene’s arthritic fingers. Leah, who had recently succumbed to lower back pain and acute Achilles tendonitis was now complaining about her knees.

My knees were also aching from sliding down one too many slippery slopes. Even Doug, the youngest of all of us by at least eleven years had to admit that his right knee was locking up occasionally. The ladies cut their hike short, taking a quick detour to the parking lot, but Doug and I wore our intrepid hats. We continued to the feature waterfall along the Brookside Trail with few delays or complaints…

giving us bragging rights to a 7.5 mile accomplishment, 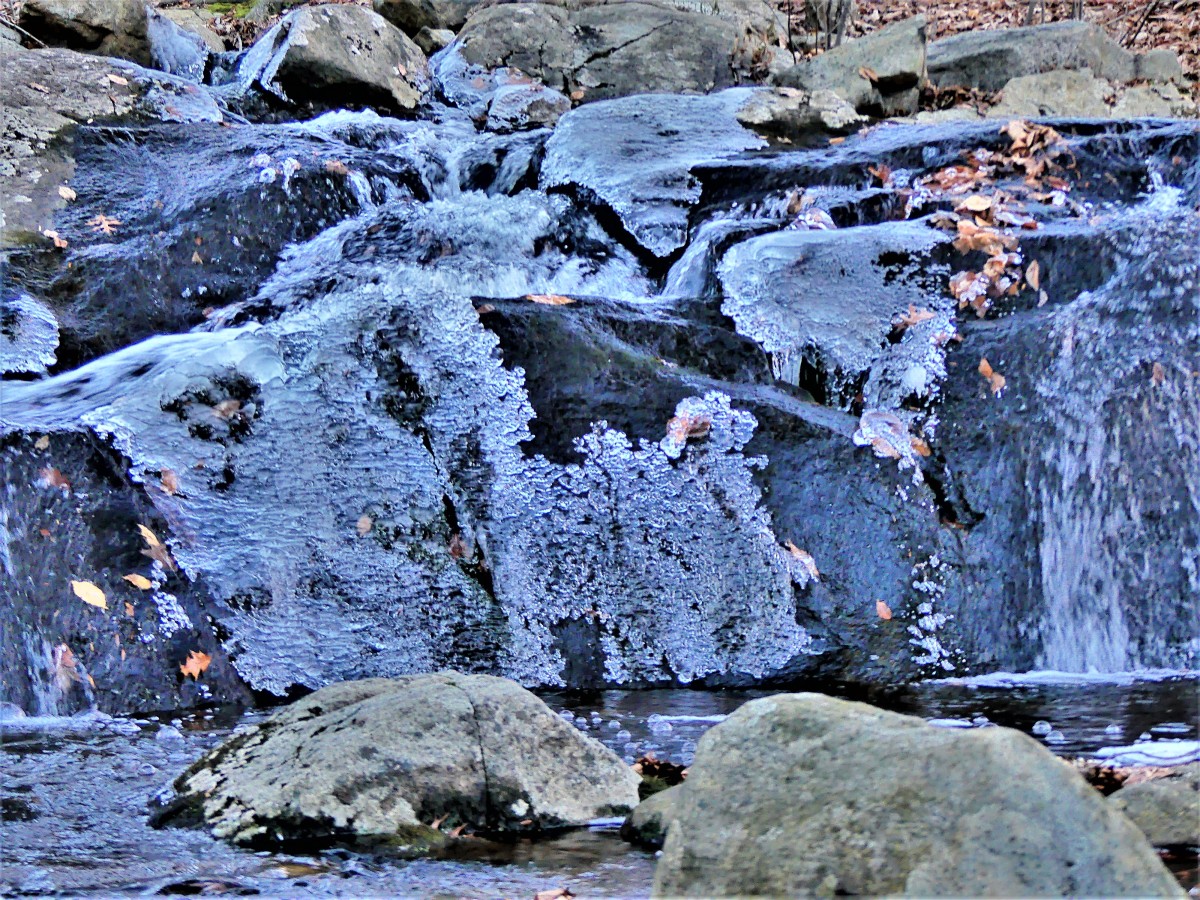 and leaving me more than ready for my true birthday present to myself: a one-hour Swedish massage at a local day spa, if only to rub my aches and pains away for another day.

5 thoughts on “Becoming My Parents”