Traditionally, every professional team sport in America routinely celebrates a season midpoint known as the All-Star game….except for football. And for the most part, these exhibition events typically showcase the finest talent of the league franchises, usually selected by fans and coaches to honor the athletes who have amassed the season’s best stats…except for football.

Instead, the NFL currently slips its All Star game (called the Pro Bowl) between the Conference Finals (which determines the winners of the AFC and NFC) and the Super Bowl. As for talent, after excluding football’s best players heading to Super Bowl LII (Philadelphia Eagles vs. New England Patriots), player selection for this year’s Pro Bowl has been determined by fans, players and coaches in equal parts.

Pro Bowl enthusiasm among hand-core fans has flagged in recent years, now that warm and fuzzy football has replaced hard-nose hitting on gameday. The NFL punted the problem to the Players Association, who conceded that members may voluntarily decline to play due to injury concerns. But the league tackled player indifference by raising the stakes and incentivizing competitive play, with $64,000 awarded to every player on the winning side, while losers receive $32,000.

Thankfully, only the Super Bowl remains, before football passes the sports mantle to hockey, basketball, and the Winter Olympics. Fortunately for me, a very laid-back sports fan, uneven internet access and poor TV service from coast to coast prevented me from following the colossal collapse of the New York Giants (3-13), a four-time Super Bowl champion, and a perennial contender.

I decided to treat Leah to a last day of football. However, neither of us was counting on a day of downpours.

to the time we returned to the parking lot with minutes to play, and the AFC squad advancing to the goal line for an eventual 24-23 win. 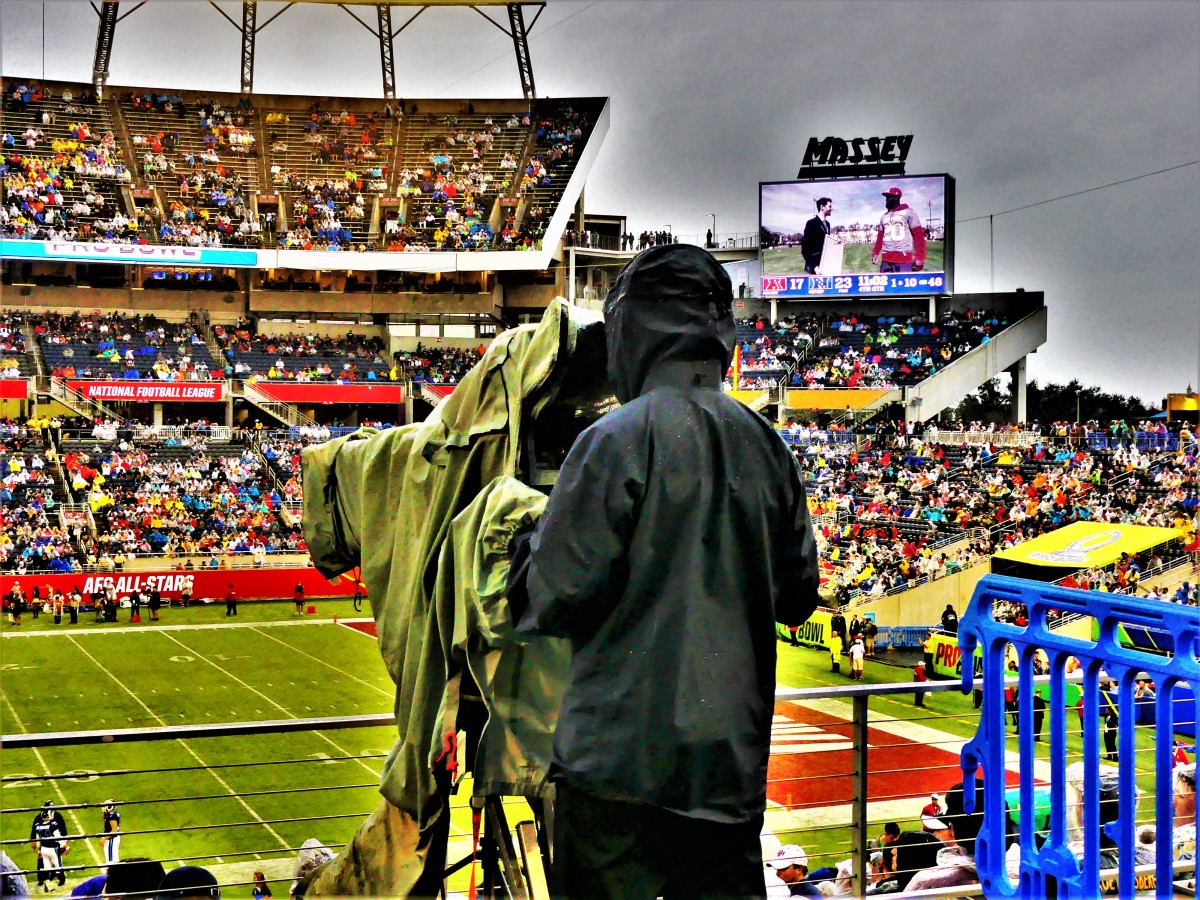 In between, there were a few things to cheer about.

And then there was football, too.

The Pro Bowl was a game of two different halves, with the NFC holding a 20-3 half-time lead, capitalizing on dominant drives over darkening skies.

Meanwhile, preparation for half-time festivities devolved into occasional swordplay on the sidelines, 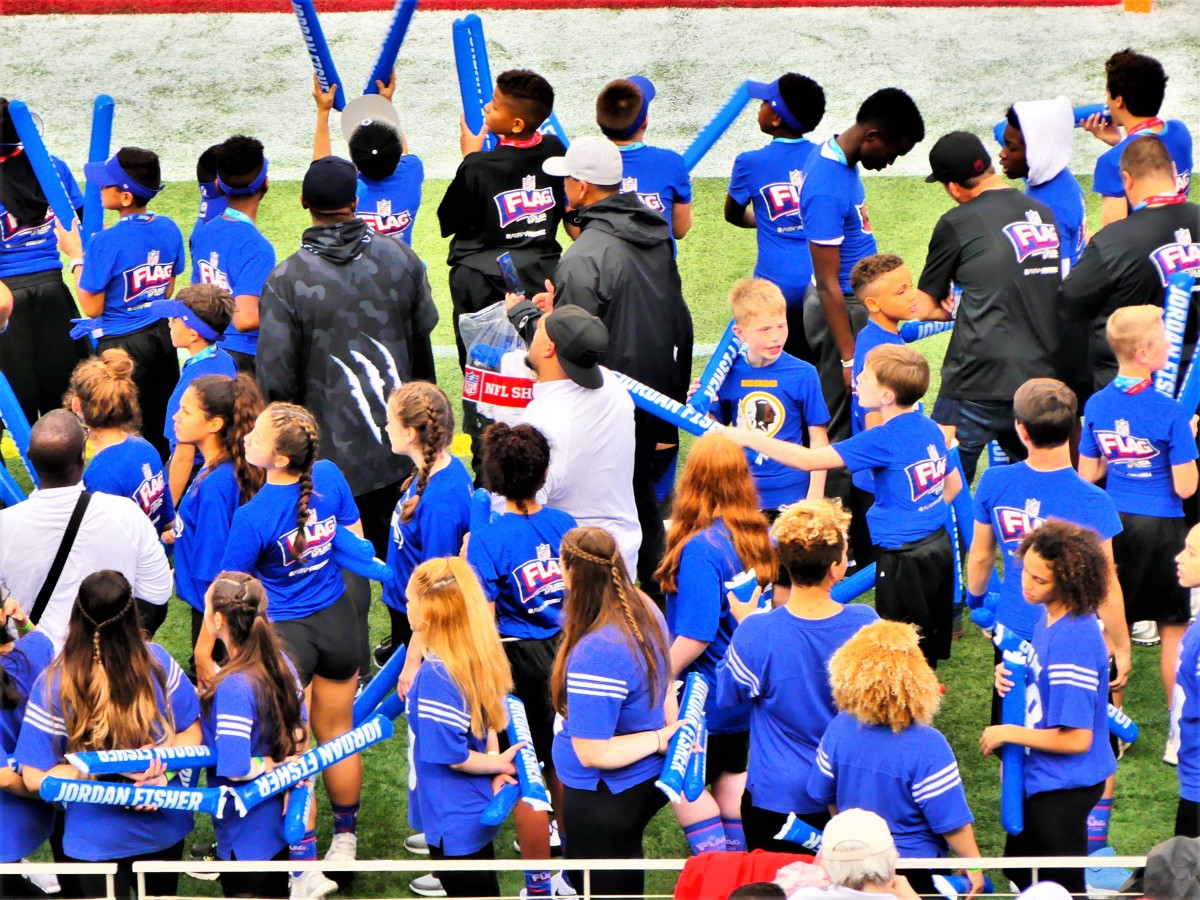 However, sword order was eventually restored after Dancing with the Stars winner Jordan Fisher emerged… 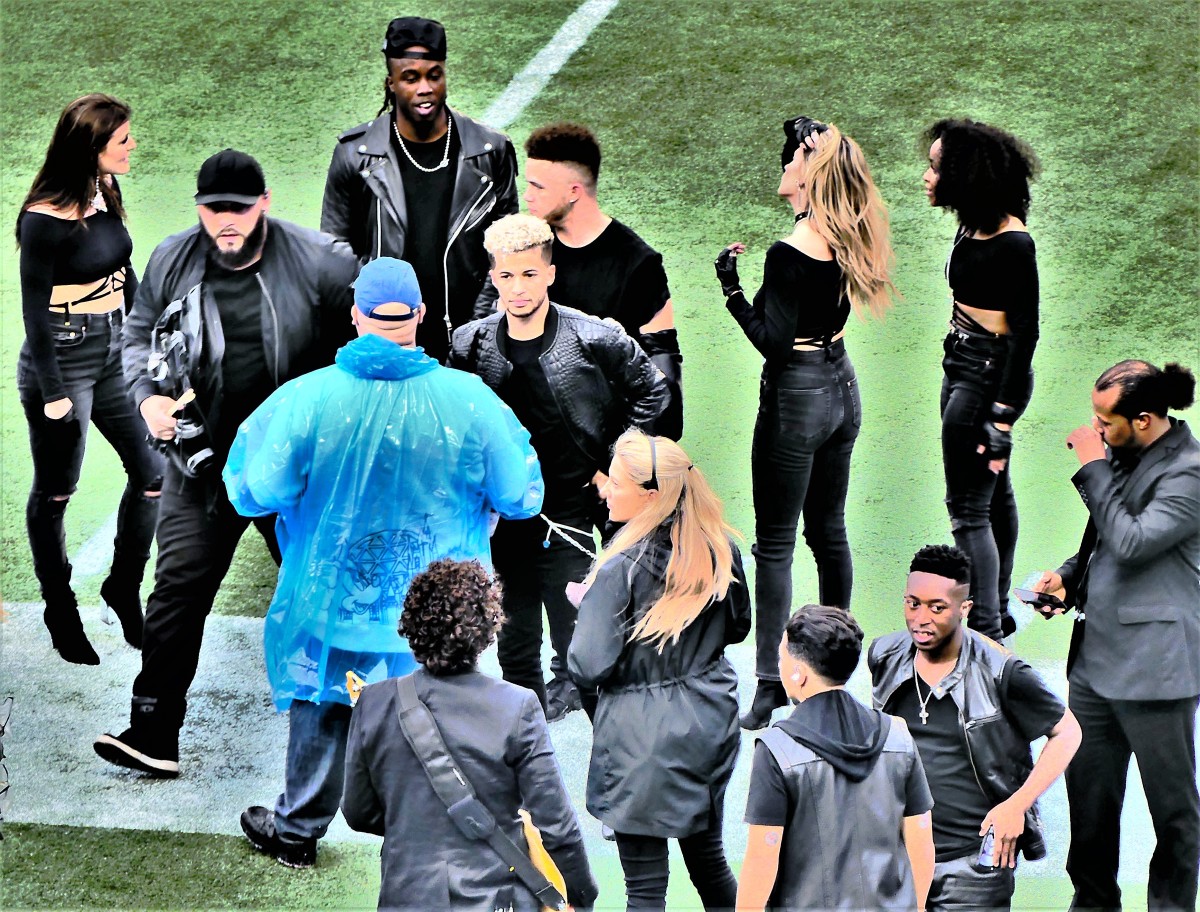 and took the makeshift stage for ten minutes of coordinated music and mayhem,

eventually finishing with a flourish. 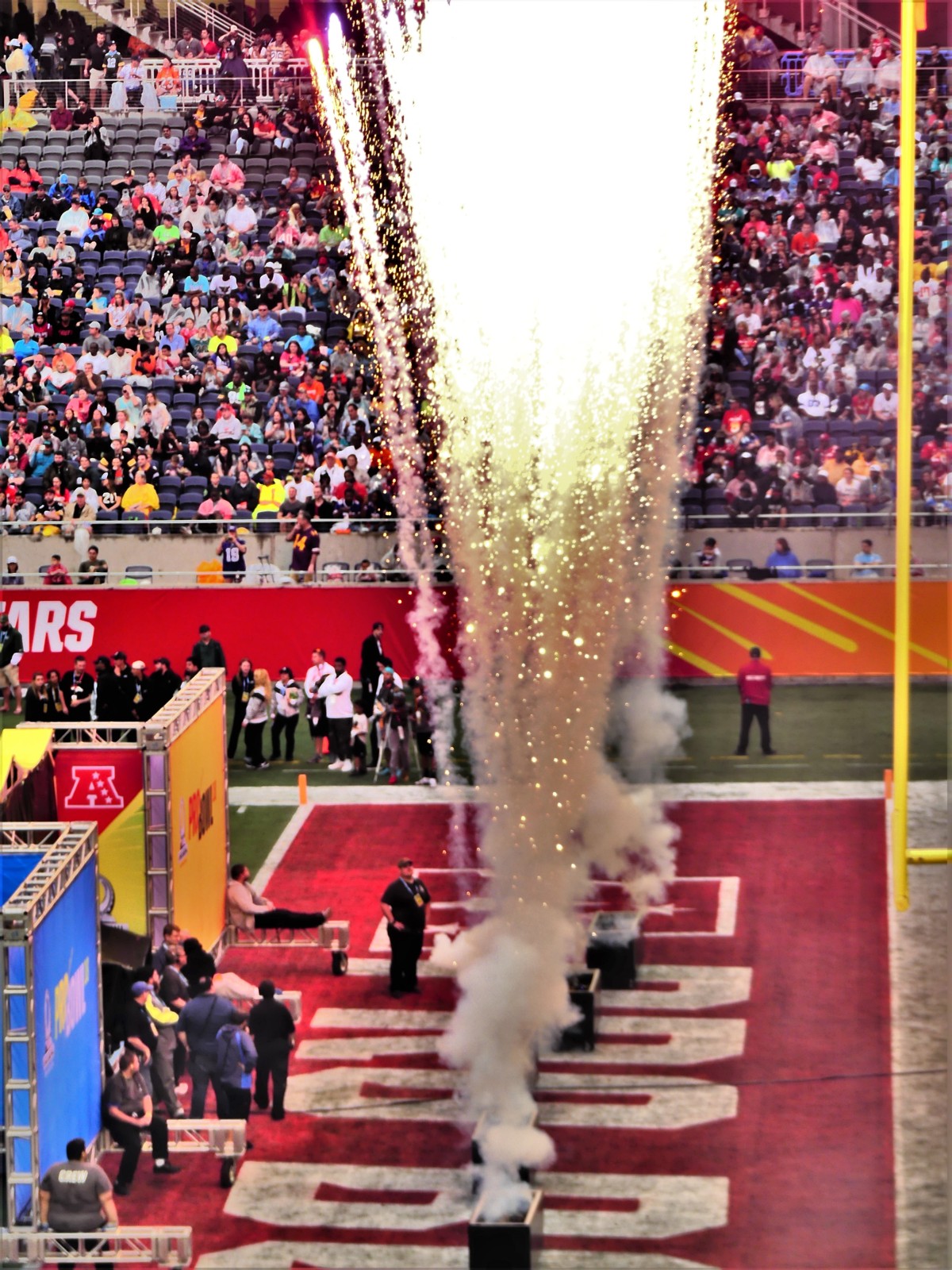 When the game resumed, it seemed as if a different NFC squad had taken the field,

allowing the AFC to roar back under increasingly sloppy conditions. 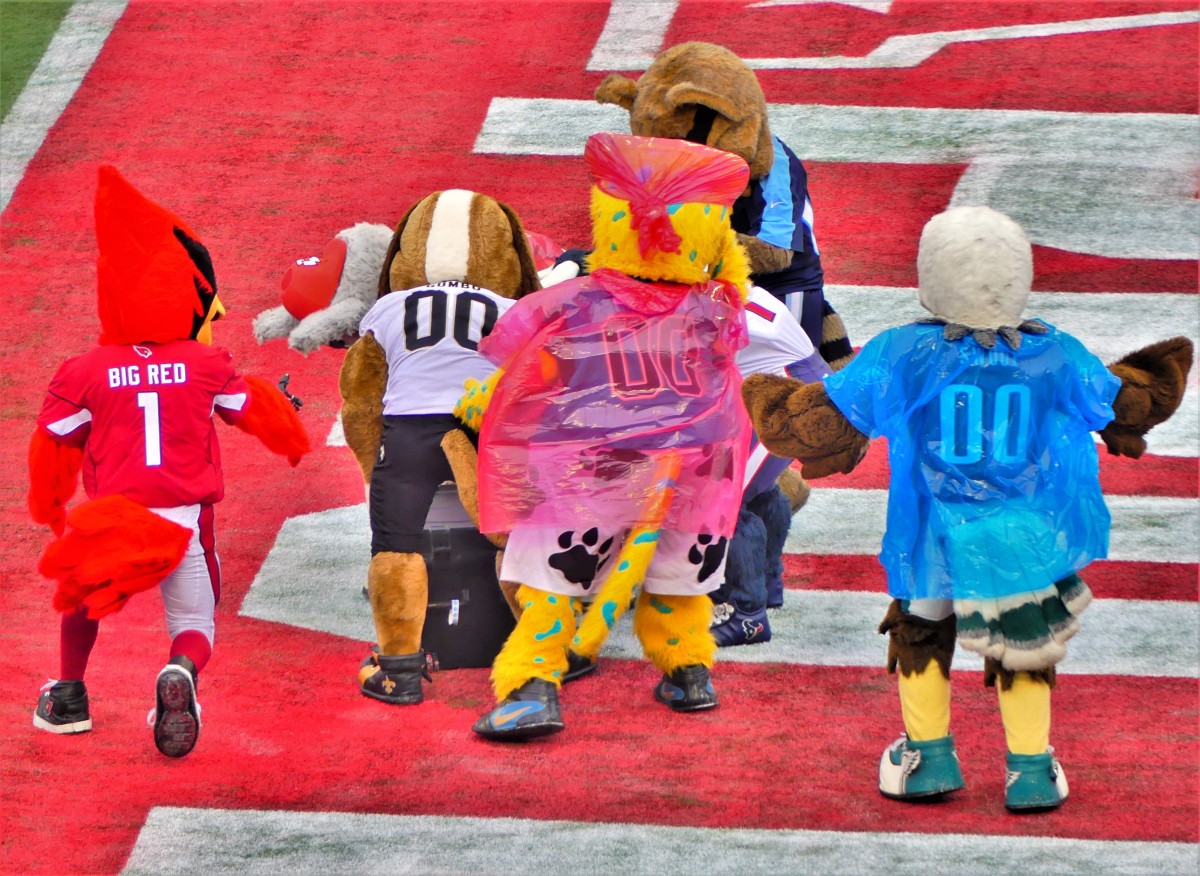 Naturally, the biggest score of the day occured at the concession stand, when food vendors raided my wallet for $32 in exchange for a cheesesteak, fries, Coors Lite, and a bottle of water.

But despite the puddles and the pouring rain,

we put on our game faces, 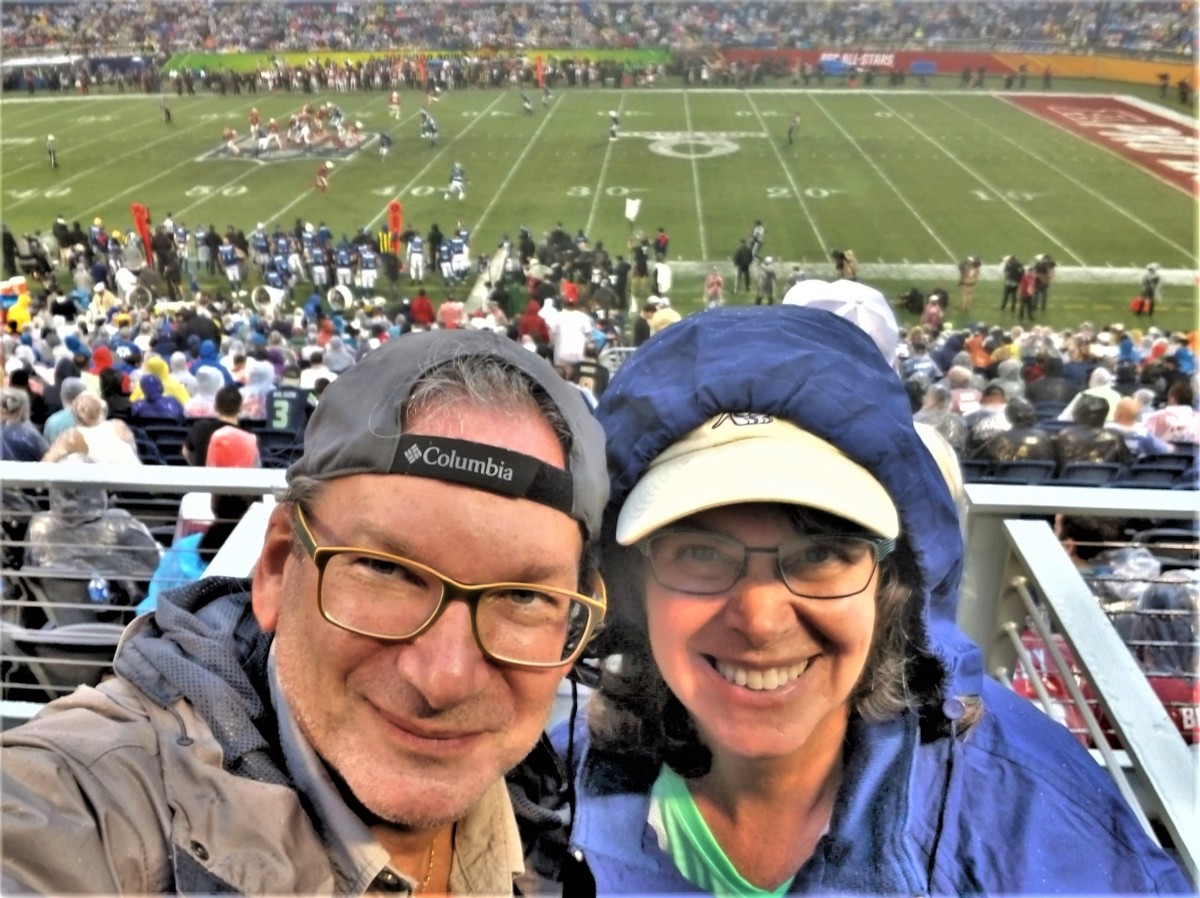 and managed to convince ourselves that all of this was time and money well spent.