Many in the tourism industry descibe Door County as the mid-western equivalent of Cape Cod, and they make a valid point. If Cape Cod is the crooked finger beckoning the Atlantic Ocean, then Door County is Wisconsin’s thumb poking the western side of Lake Michigan. Both peninsulas offer a laid-back vibe, with historic beachtown pearls bordering sandy, rocky beaches.

We began our tour by exploring our home base in Kewaunee, a southern border town below the county line. 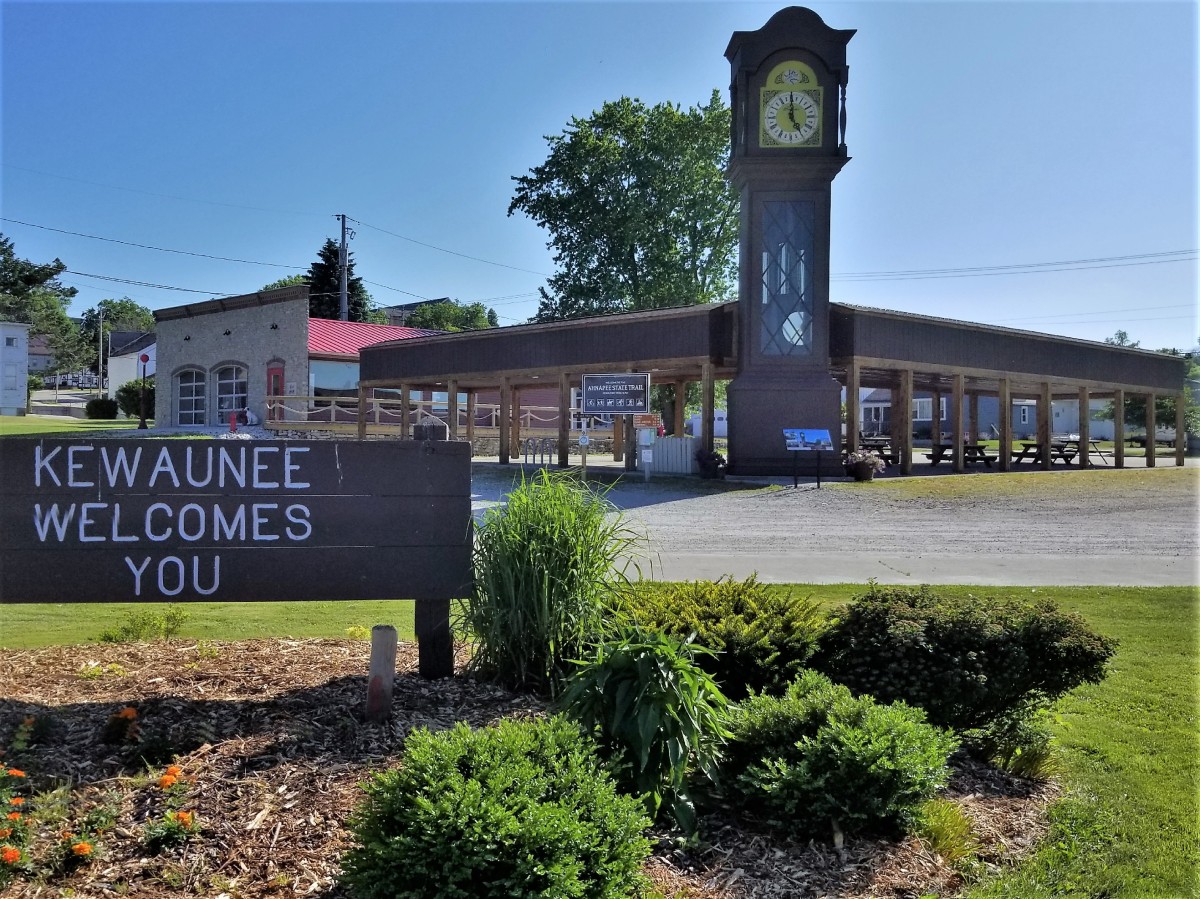 We knew nothing about the clock, so it took us by surprise. At noon, it chimed over and over again, then played a “bell” rendition of Amazing Grace. 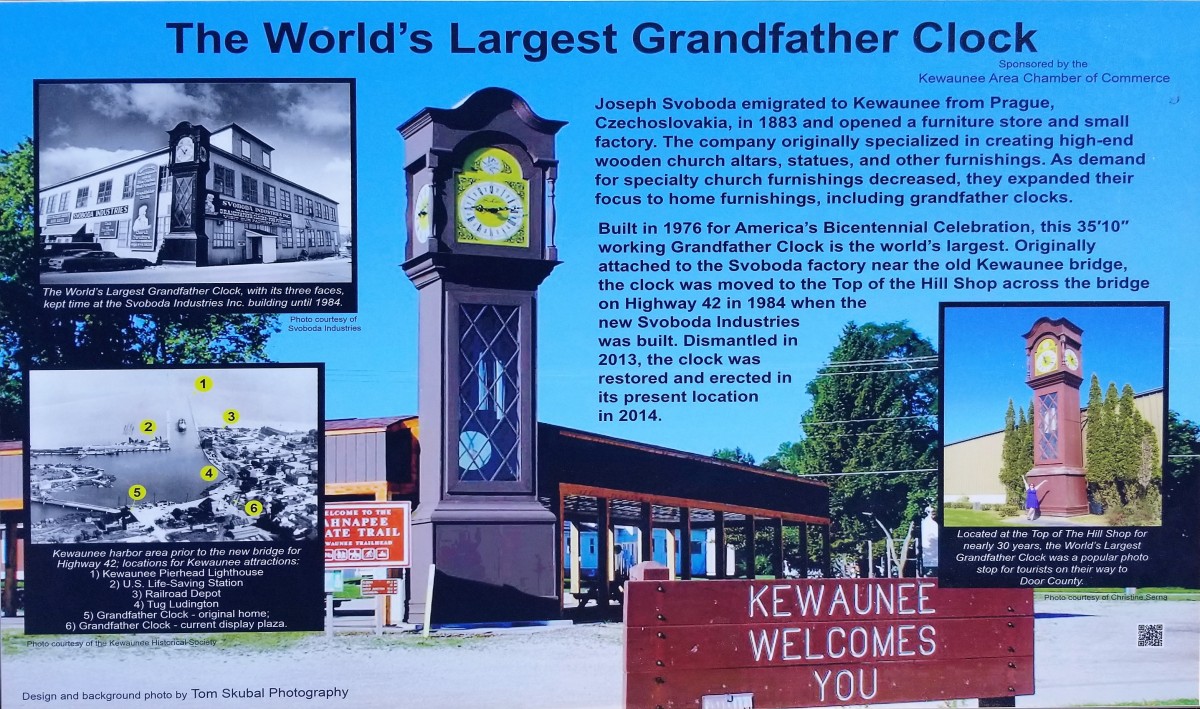 A short walk to the waterfront brought us to the Ludington. Retired in 1998, the tug saw action during the D-Day invasion at Normandy by pushing barges of ammunition across the English Channel, and later as a construction tow for the Army Corps of Engineers. 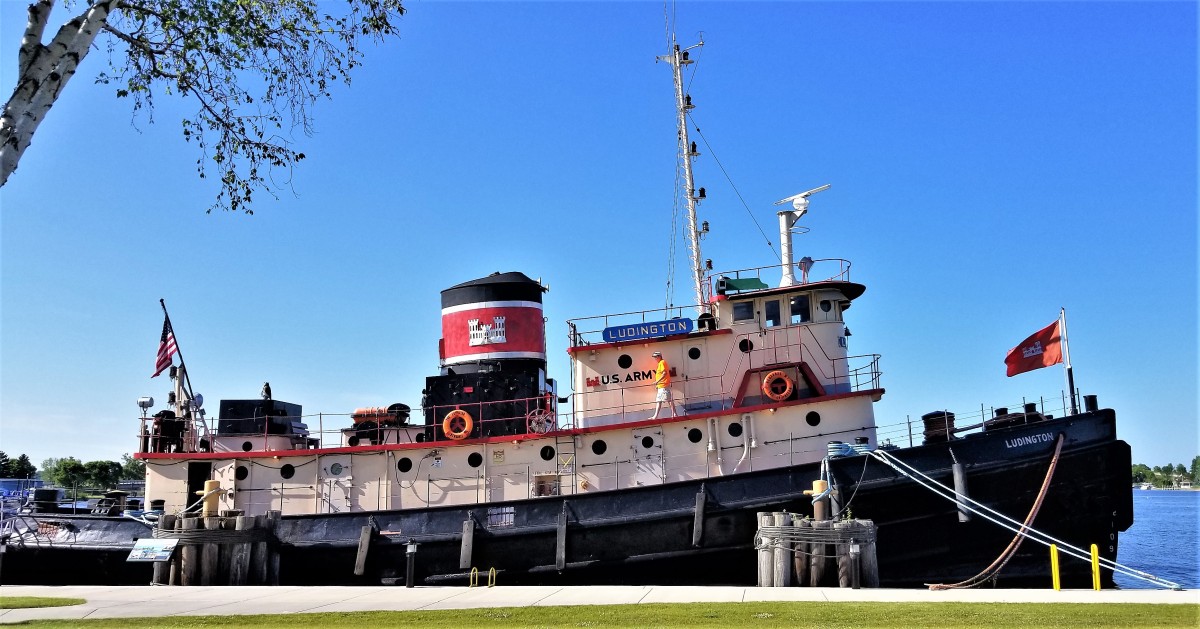 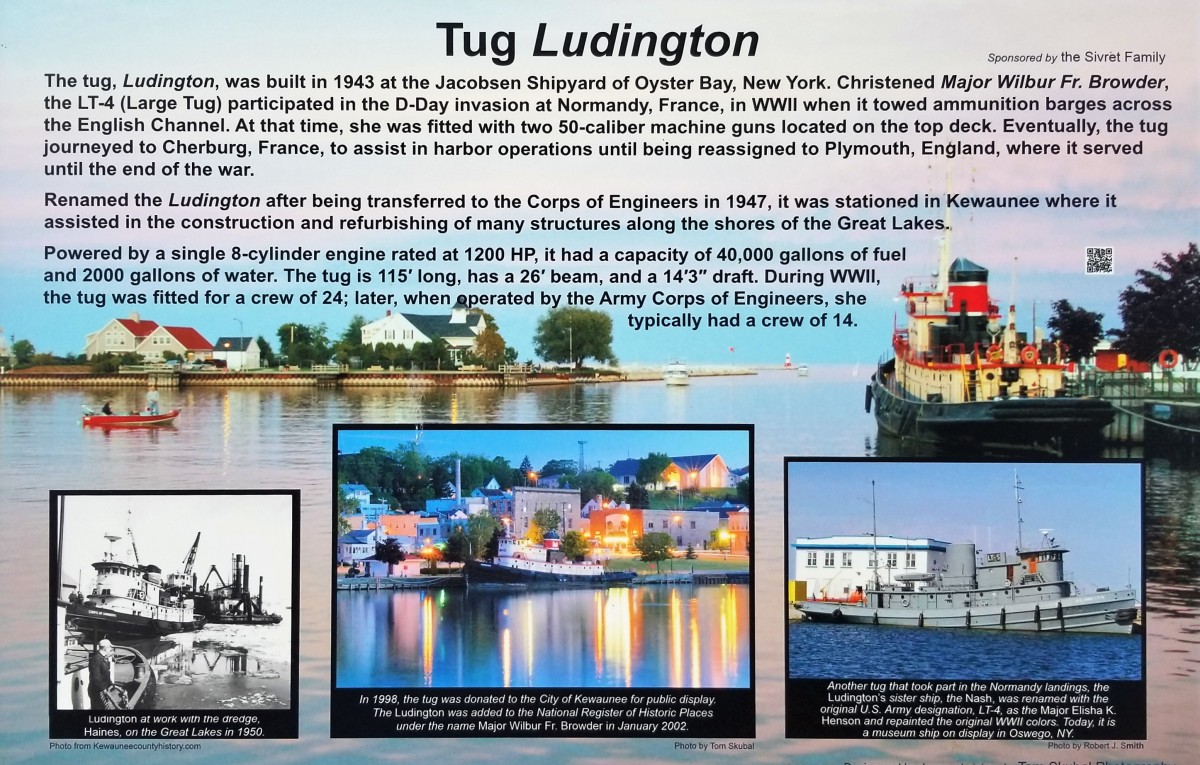 Like most newcomers, we got our coastal orientation by walking out to Pierhead Light,

but following the path was like a twisted game of minefield hopscotch.

Ellis Street was closed to traffic for a smallish classic car show that appealed to locals, auto enthusiasts from Green Bay, and bloggers…

with plenty of space for antique tractors and snowmobiles in the parking lot.

Further up the coast sits Algoma, a town with a Crescent Beach Boardwalk that parallels an arc of sand and polished stones, and the Algoma Pierhead light that welcomes hundreds of roosting gulls at any time.

With so much ground to cover and little time to spare, we detoured along the coastal county roads to Sturgeon Bay, a town with a rich ship-building legacy and a lust for shopping. While not my favorite activity, we parked the F-150 and strolled the sidewalks, passing through galleries and home furnishing boutiques.

Local artists brought their imagination and decorating prowess to town, converting plain Adirondack-style chairs (or created a chair/bench of their own) for the inaugural CHAIRies, a public art project on display at most downtown corners, and a nod to the bountiful cherry groves scattered throughout the peninsula. 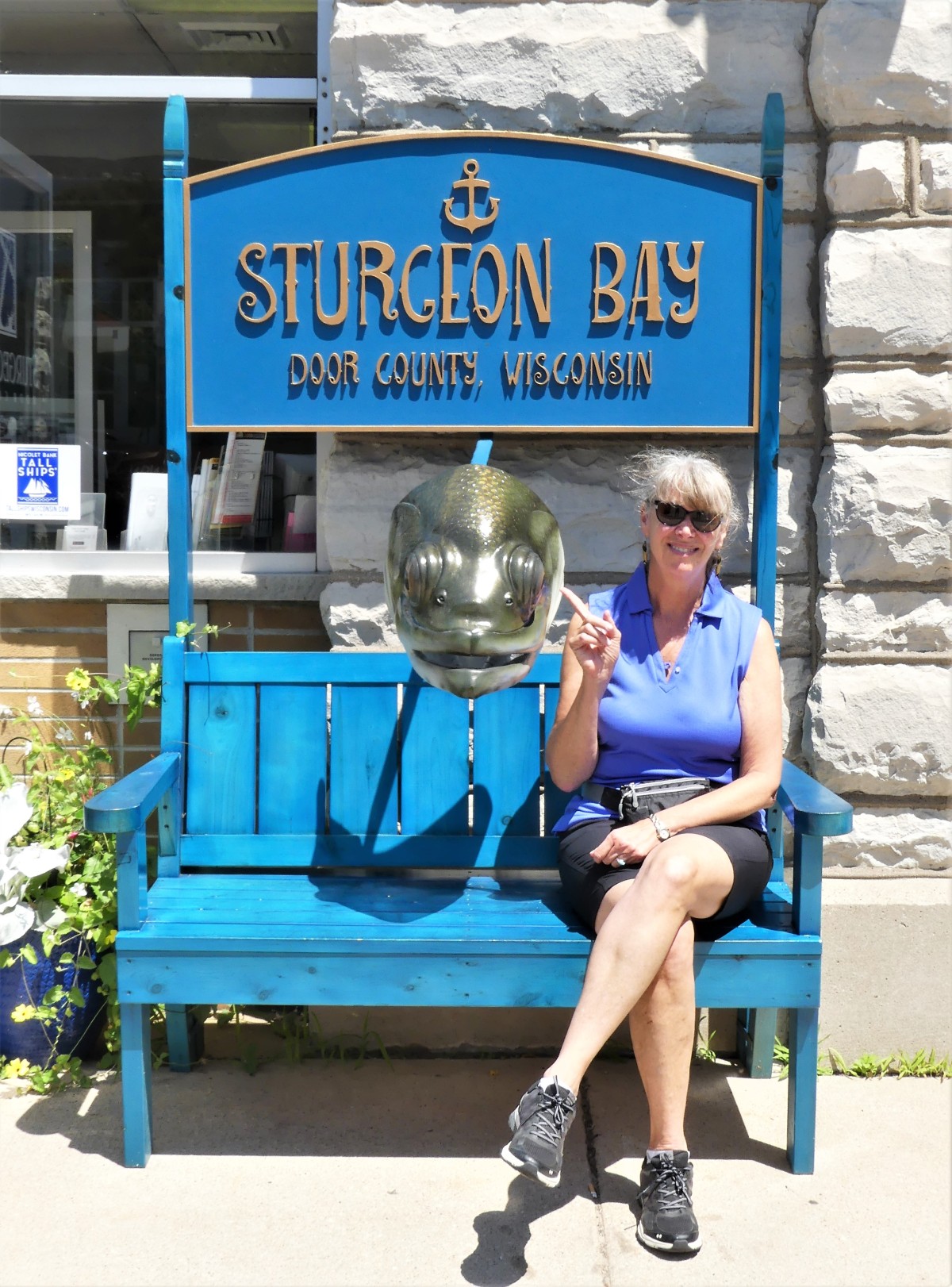 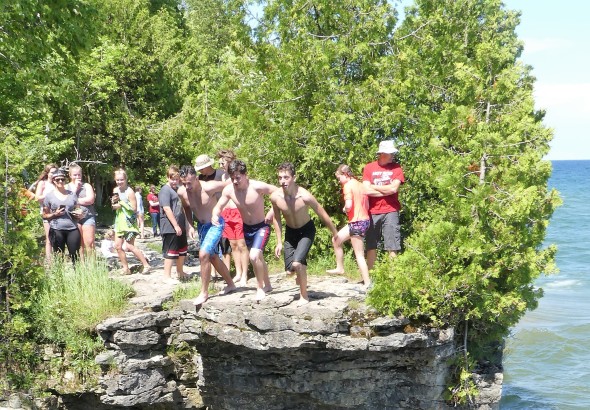 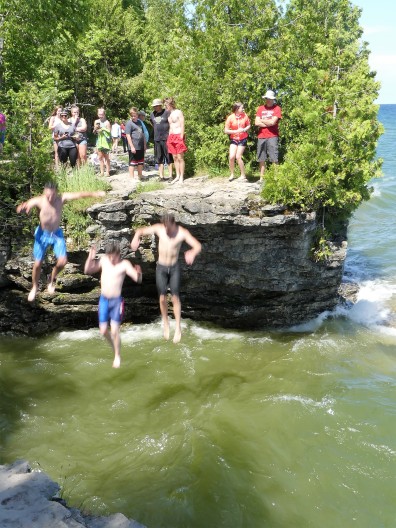 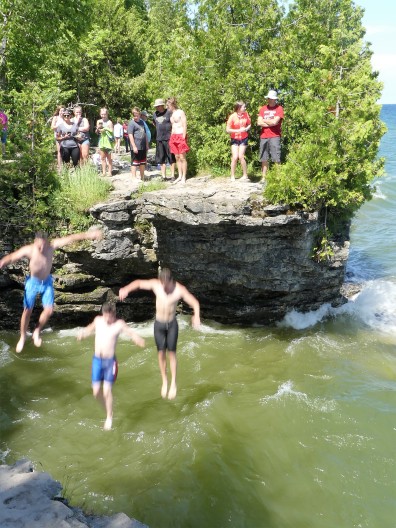 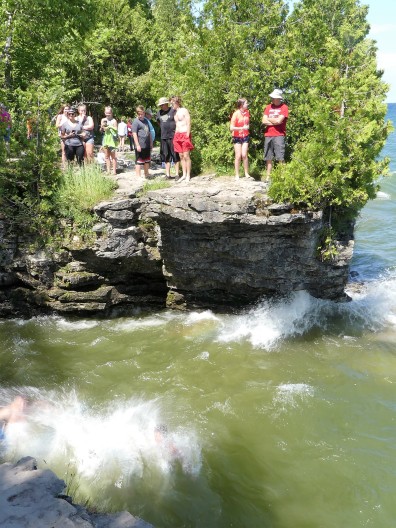 who are fortunate to clear the cliffs or avoid the crashing waves.

Riding north on WI-57, we cut through the middle of Door County’s thumbnail, and headed for Northport, known for ferry service to Washington Island at the tip of the peninsula. and the gateway to Death’s Door, a legendary passageway with a washing- machine turbulence that has shipwrecked many 19th century schooners. 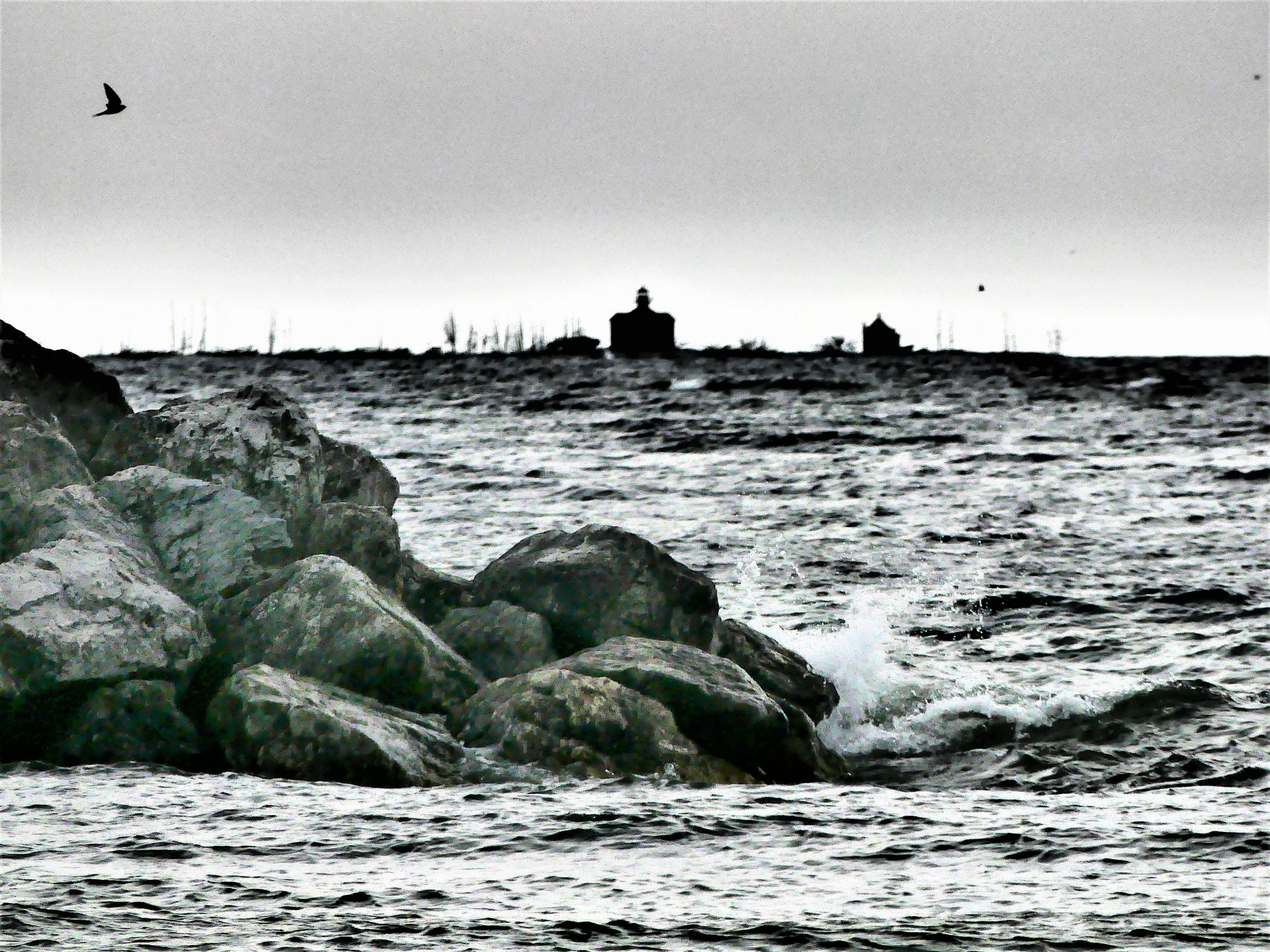 We rushed along WI-42 from Northport down Green Bay’s sidelines, needing to reach the Airstream end zone after a long day of driving, but deliberately slowing around a bendy stretch of road nearby.

Then we were dodging and weaving our way through a variety of pedestian-rich towns at 10 mph, absorbing the downtown charm of Ellison Bay, Sister Bay, Ephraim, and Fish Creek from the front seat of our truck.

We vowed that we would return the following day for a glorious sunset dinner, as we settled on leftover pizza and samosas under a cloudy sky.

11 thoughts on “The Key to Door County”