After nine months of driving 32,000 miles and covering 102 destinations, Leah and I arrived in time to celebrate Dad’s 93rd birthday at MorseLife Memory Center in West Palm Beach, Florida. It had been ten months since I had last seen Dad, and I was determined to be there to mark Dad’s latest milestone.

But things did not go originally as planned. In my mind, Dad had remembered the dozens of phone calls we shared prior to my arrival, with me always reminding him of our anticipated plans for our visit: how Leah and I would pick him up and treat him to dinner at a local Chinese restaurant–something he hadn’t tasted since relocating to a Kosher assisted-living residence over two years ago.

Instead, we found Dad sitting in his lounge chair in his room, with a nebulizer mask around his face. His eyes were shut and he was still, as the whir of the machine misted steroids into his lungs. I glanced at his right hand to examine the damage the nurse had called to tell me about while we were enroute.

His paper-thin, leopard-spotted skin was loosely wrapped in gauze to protect a tear above the web of his thumb–the damage caused by a tumble after losing his balance while pushing himself out of his chair during a late morning activity.

I removed his omnipresent cap and kissed the crown of his bald head.

“Happy Birthday, Dad!” I shouted, so he could better hear me without the benefit of his hearing aids, out for repair. He opened his eyes, and forced a smile through the mask.

We allowed time for his aide to untether him and prep him for his big night out.

Earlier in the day, there had been a small birthday celebration after lunch, with cupcakes for all the residents on his floor. Although he couldn’t recall the sing-along, he vaguely remembered the cupcakes, which were finger-lickin’ good.

It seems that one of the side effects of bottomless home-cooking and easy-living at MorseLife has been a steady rise in Dad’s weight–from 185 pounds upon admission, to 220 pounds, currently–accounting for four complete wardrobe changes within the past 18 months.

“Today’s your birthday, Dad. Do you remember me telling you that I was taking you out for your birthday?” I asked.

My question was met with a shoulder shrug.

Trying again, “Do you know how old you are today?”

“Not really,” he replied weakly.

“Do you remember your birth date…the year you were born?” I attempted.

After desperately trying to pull his wounded hand through the sleeve of his windbreaker without causing him to wince in pain, we knew our plans were doomed. Even if we were lucky enough to secure his outerwear, I was clueless how I would usher Dad into the front seat of our F-150 without the assistance of a forklift sheathed in kid gloves.

I turned to Leah. “This is never gonna work. We need a Plan B!”

It was just after 6pm, and the other residents were nearly finished in the dining room, so maintaining Dad’s schedule was fast becoming our newest obstacle.

Fortunately, the residence maintains a private dining room for family occasions, so I went in search of Chinese take-out food within the West Palm area, while Leah sat with Dad.

By 6:30pm, we were unpacking cartons of fried rice, spring rolls, chicken satay and sesame beef on paper plates to preserve the integrity of the facility’s dietary laws, albeit, still feeling somewhat guilty for turning Dad a trifle treyf.

But it was hard to argue with Dad’s reaction. He was enjoying himself.

Surprisingly, he had given up on tableware, and surrendered to his hunger by using his hands. Unlike spring rolls and satay, I never thought of fried rice and sesame beef as finger food, but to Dad, it all looked the same, and tasted like more.

After cleaning up, we posed for pictures with the Birthday Boy, 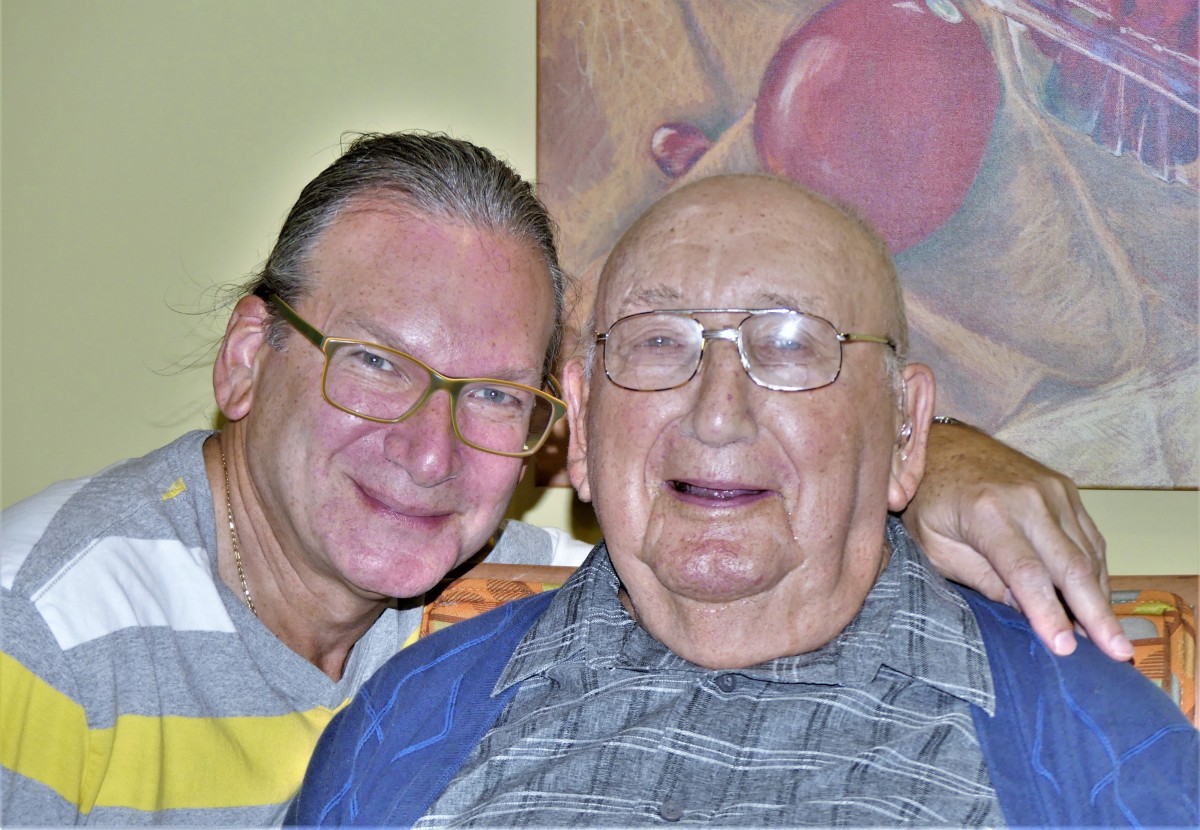 and wondered how much of Dad’s party would be remembered by tomorrow. We made him swear an oath–that he would never tell that we infiltrated a Kosher facility with non-Kosher food.

And sadly, he never will.